What SUV has a 34-degree approach angle, an optional diesel motor, skid plates, and an air-suspension that raises up to 4 inches? If you read the title, you’ll know it’s not a new Land Rover, Ford, or even Toyota, but rather GMC’s 2021 Yukon. Trust us, we’re just as surprised as you.

They dropped the bombshell earlier today at a press event in Vail, Colorado, before allowing us to hit the trail in some test models still wrapped in camouflage. This latest iteration of their long-running SUV line boasts a host of impressive features including a new Active Response 4×4 system, an electronic limited-slip, optional four-corner independent air-suspension, and for the first time, an optional 3.0L straight- six diesel motor. Duraburb fans, you may rejoice.

Okay, so there is a lot to unpack with the new Yukon. There’s an all-new interior which is definitely plush, and boasts 41 percent more third-row legroom, and 66 percent greater cargo volume. You can get a power-sliding center console that doubles as a hidden safe, impressive infotainment system, and an abundance of safety features like automatic emergency braking and rear pedestrian alert which can identify someone walking 26 feet away. They’re all great selling points, but the bigger story for us is the array of off-road highlights that might make the 2021 Yukon the perfect vehicle for family hauling and hitting the trails. So, let’s take a look at some key facts. 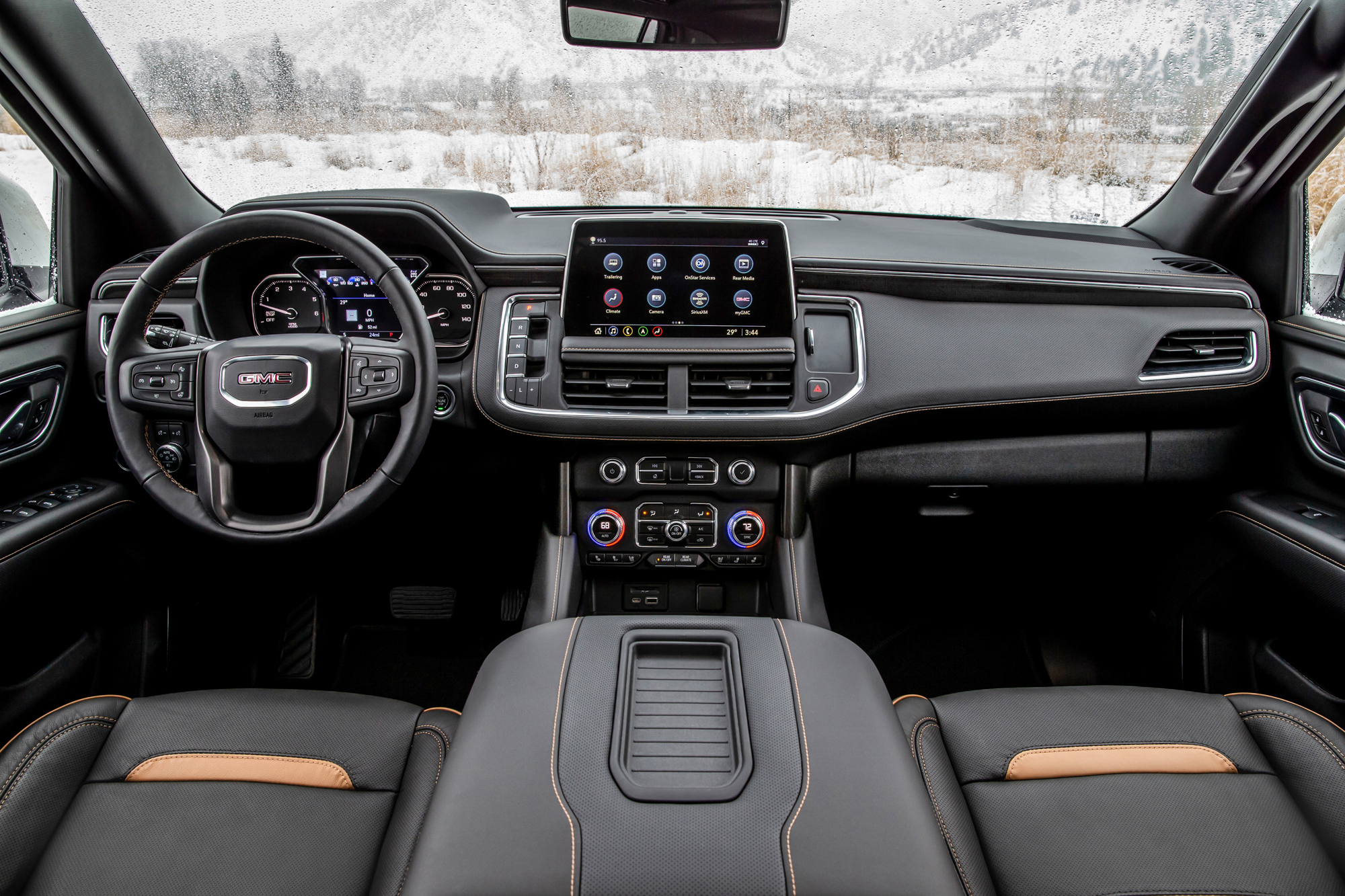 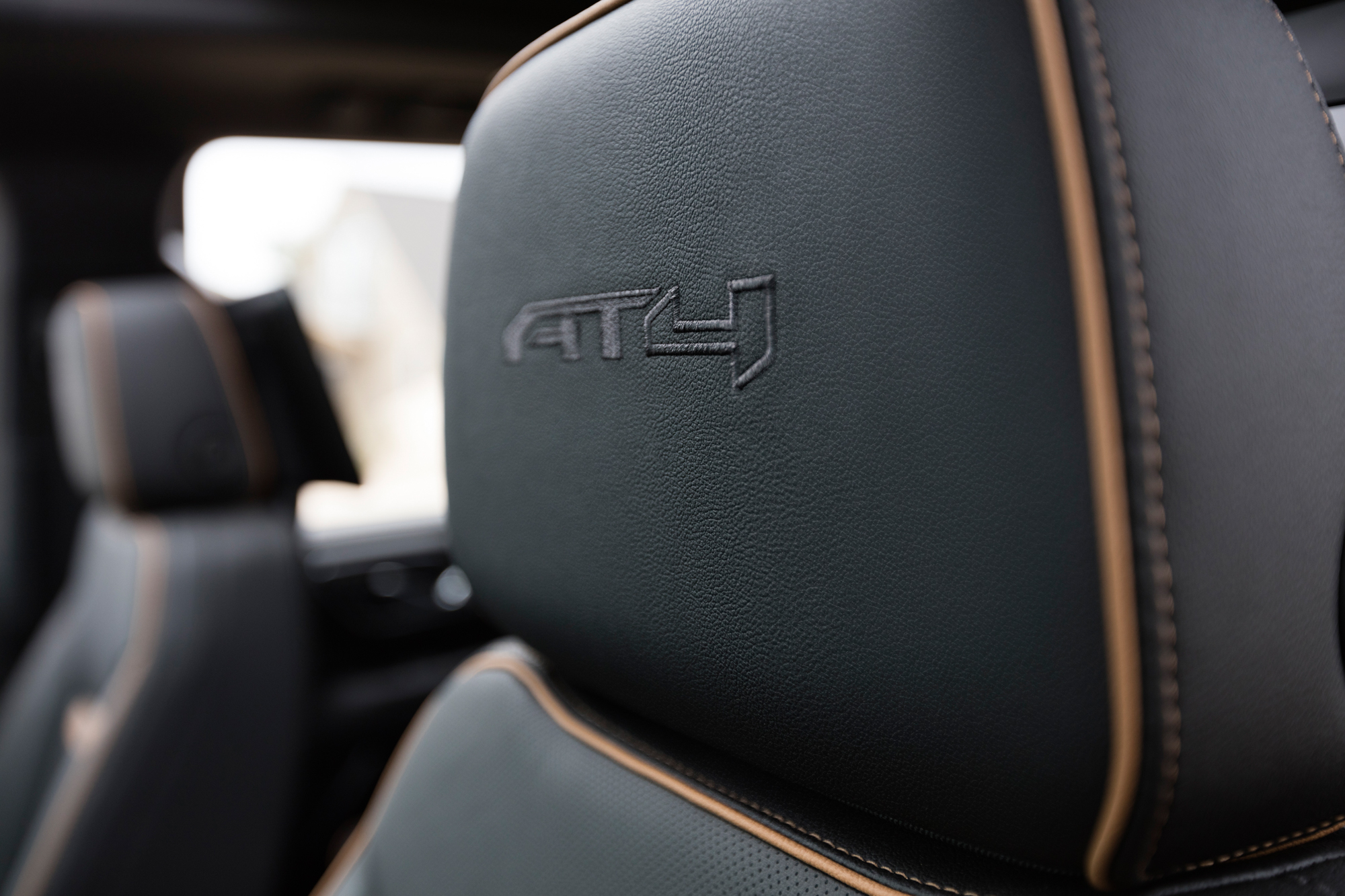 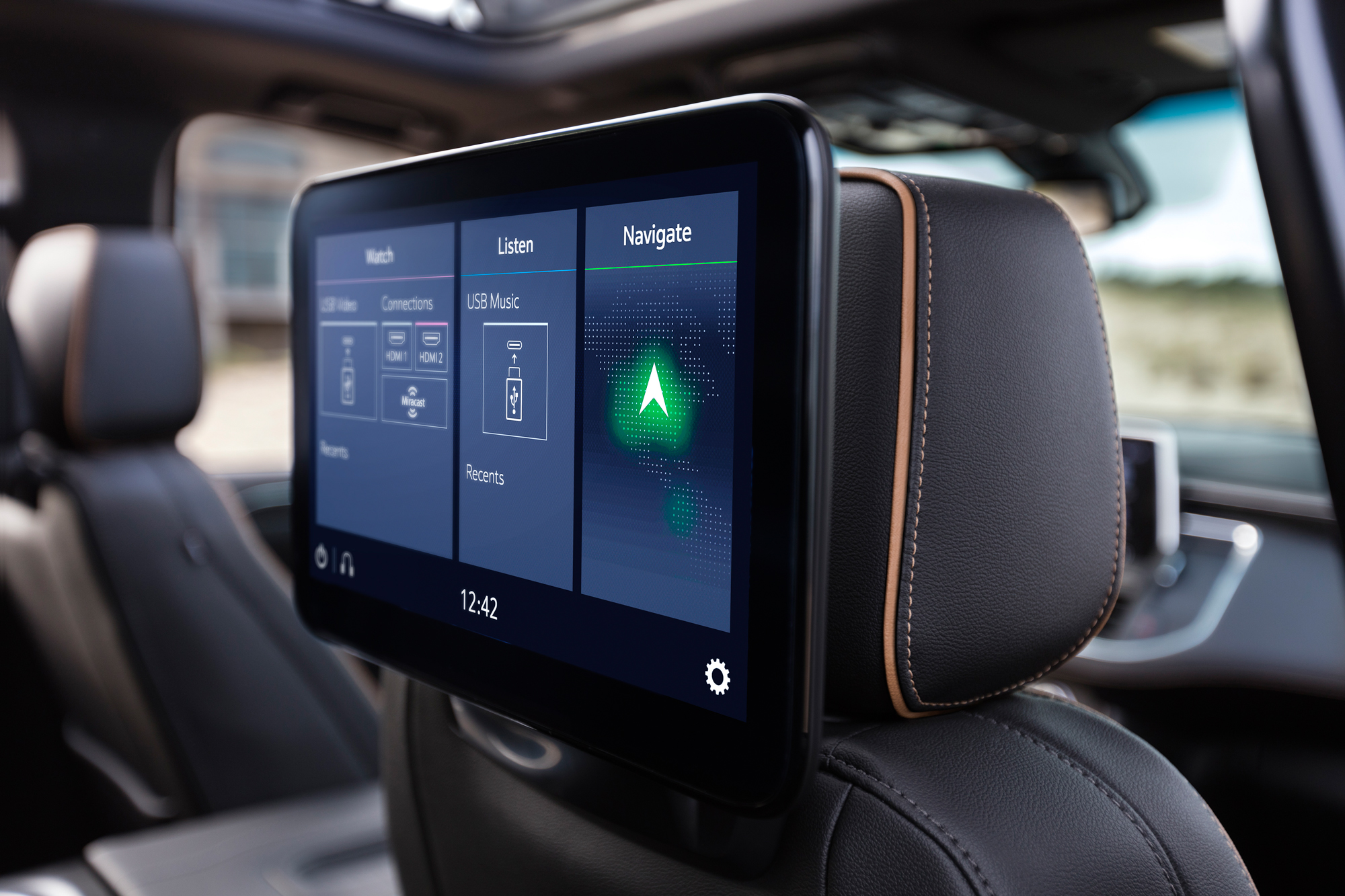 The AT4 trim has skid plates, a new front fascia, recovery points, and more

GMC’s AT4 package has become increasingly popular over the last year, so in 2020 they are expanding this off-road biased trims to every model in their lineup. The treatment on the Yukon is particularly enticing and will increase the vehicle’s out of the box capability with an array of trim-exclusive upgrades. Starting at the front, you’ll find the AT4’s signature red recovery hooks, as well as the higher front fascia for improved clearance. The Yukon will boast an impressive 34-degree approach angle, which is higher than the 200 Series Land Cruiser. By our field measurements, the Yukon may have more ground clearance as well.  The AT4 package will also add new skid plates to protect the underbody, more aggressive all-terrain tires, and a unique Jet Black interior color theme with Brandy accents.

“Our mission with the next-generation Yukon was to create an off-road-capable vehicle with a premium interior, advanced technology and class-leading space for eight people and their cargo,” – Jim Danahy, executive chief engineer of full-size trucks. 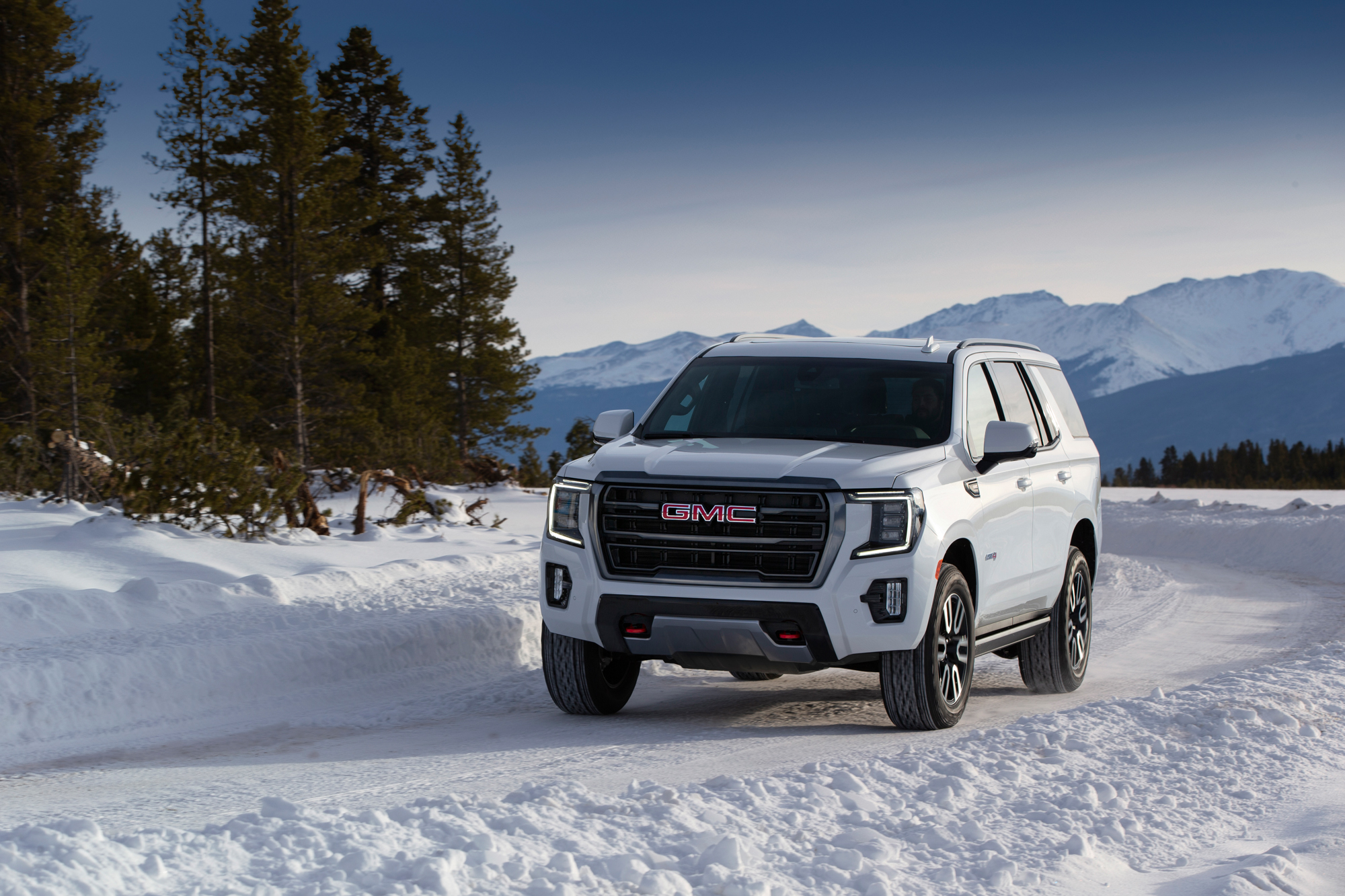 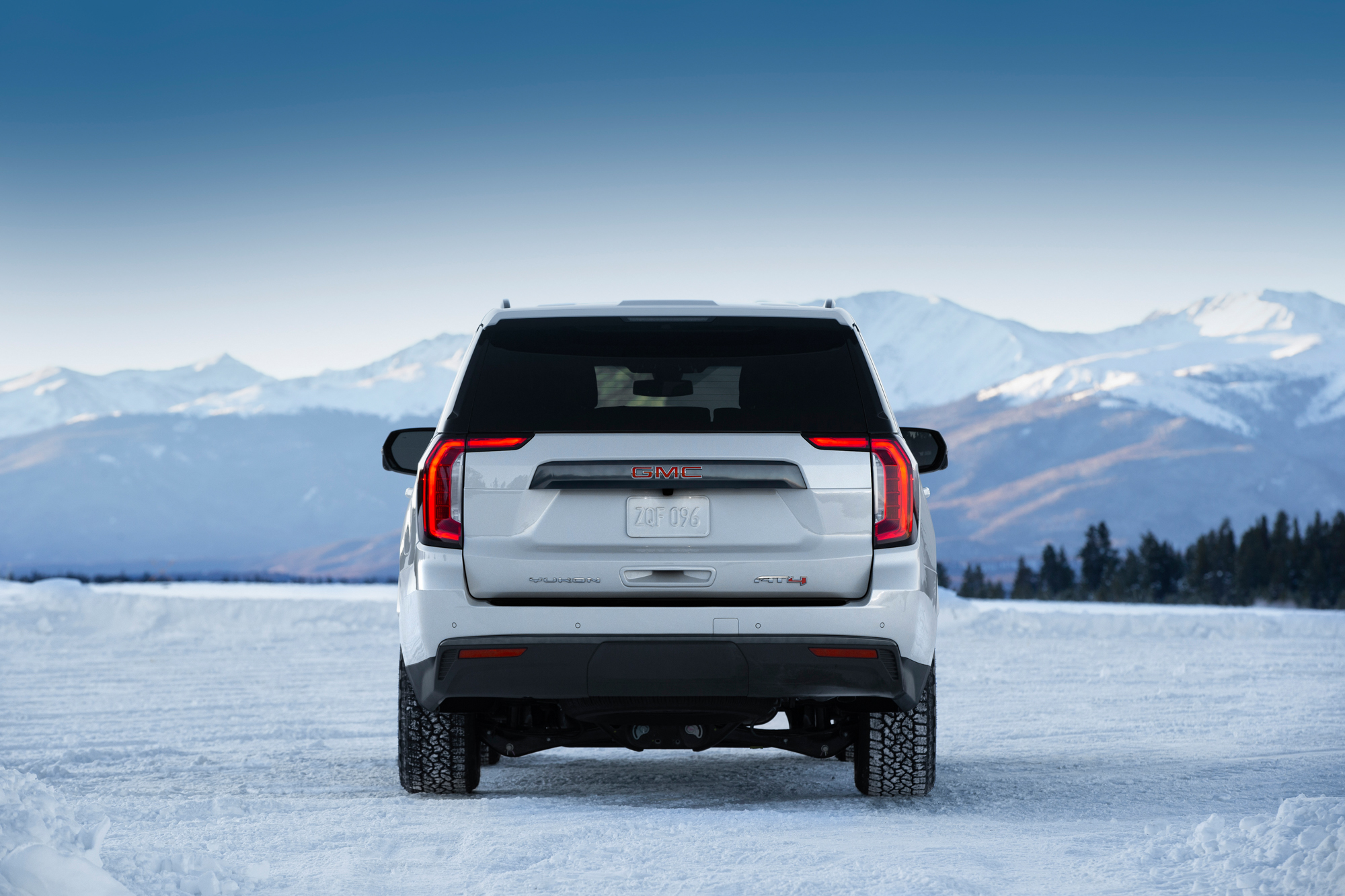 One of the biggest problems with modern vehicles going off-road is the large wheels they come with. While the Yukon can be purchased with wheels as small as 18 inches on the base model, some snooping under the Yukon revealed a 17-inch spare. That means you’ll be able to run a 17-inch wheel with the factory 33-inch tire size, and most likely, a 34-inch tire or larger sizes with some trickery.

The very unofficial field measurements of ground clearance and break over

Okay, so GMC was very hush hush on official numbers with this truck. They wouldn’t provide ground clearance, breakover angle, or departure angle, so of course, we crawled under the SUV in the snow to do some research.

For ground clearance, we measured three distances on the truck. The bottom of the skid plates rested roughly 13″ from the ground, while the low point in the rear was 11″ from the ground. The lowest point we could find, roughly as we said, was the rear sway bar at 10″ from the ground. Assuming 10″ was accurate, that would be pretty impressive for a stock SUV. 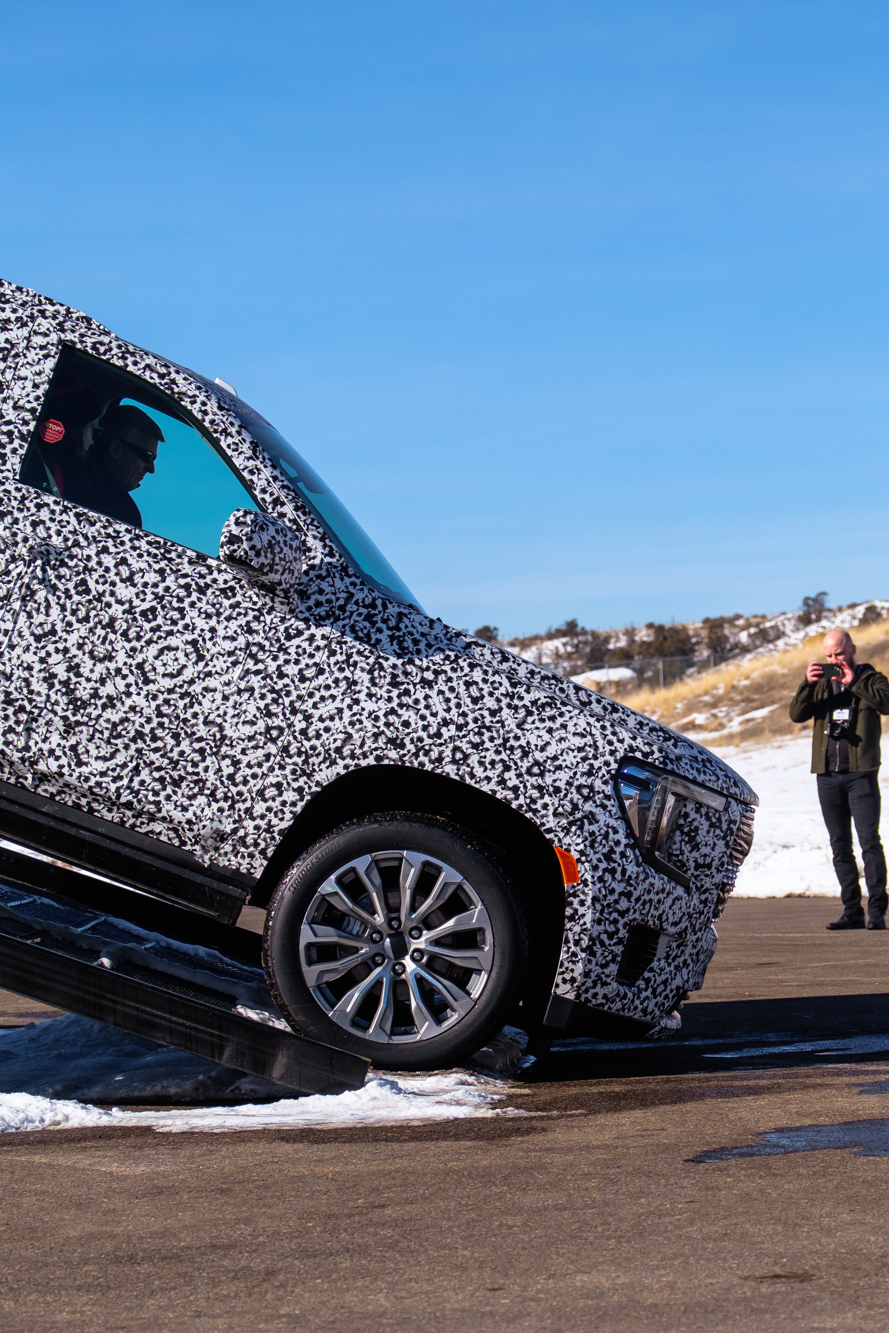 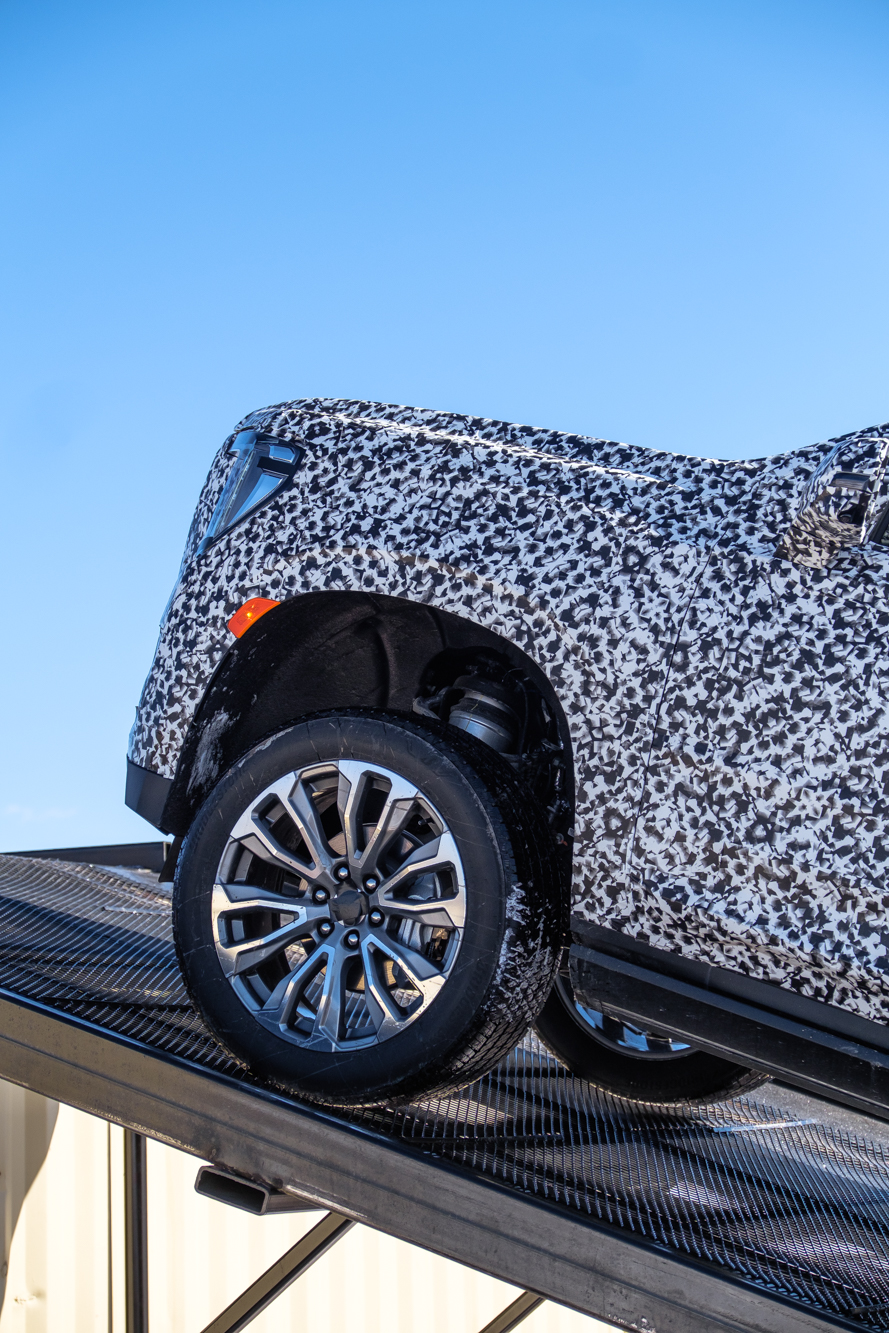 Since we couldn’t really measure the breakover easily, we instead asked about the angle of the ramp we ascended during our low-range test. Given that the top of the container and the bottom road are flat, and the ramp was at a 21-degree incline, it’s safe to say the breakover angle would be close to that. 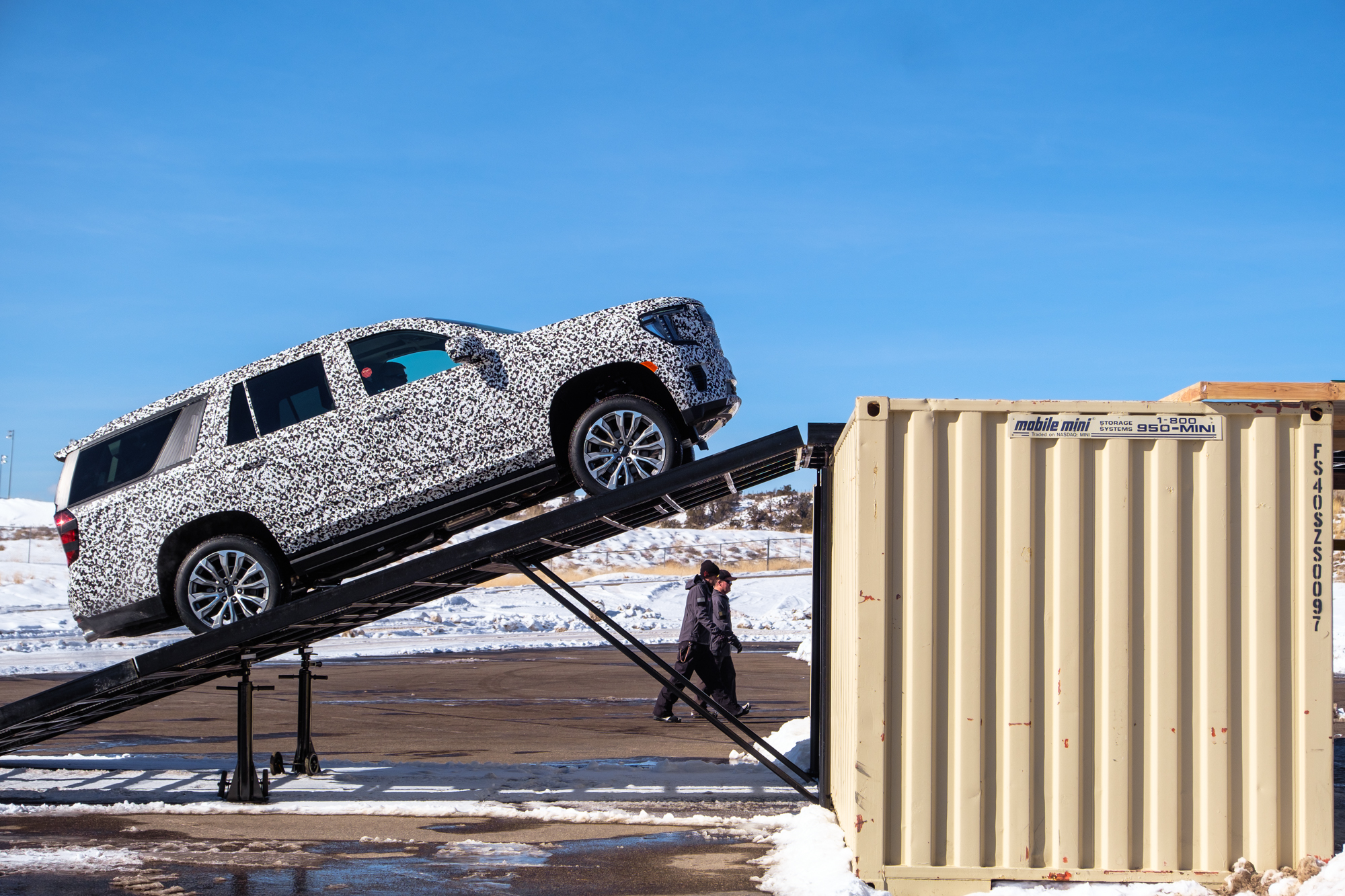 It has an Electronic Limited Slip Differential (eLSD)

Most of us are familiar with the concept of a mechanical limited-slip, but GMC’s eLSD is a bit different. Like a standard limited-slip, the eLSD operates in a fully open state under normal driving conditions and then shifts power to the wheel with better traction as wheel slip occurs. However, the electronic engagement allows the LSD to engage based on other vehicle inputs from the computer as well, including, most notably, a switch to 4-low. When you drop into low range, the limited-slip will engage in a “full-lock” state and act nearly like an electronic locker. While I’d like to be able to tell you how that works on the trail, we haven’t been able to test it yet. The results on the ice- and snow-covered course in Colorado though were certainly impressive. 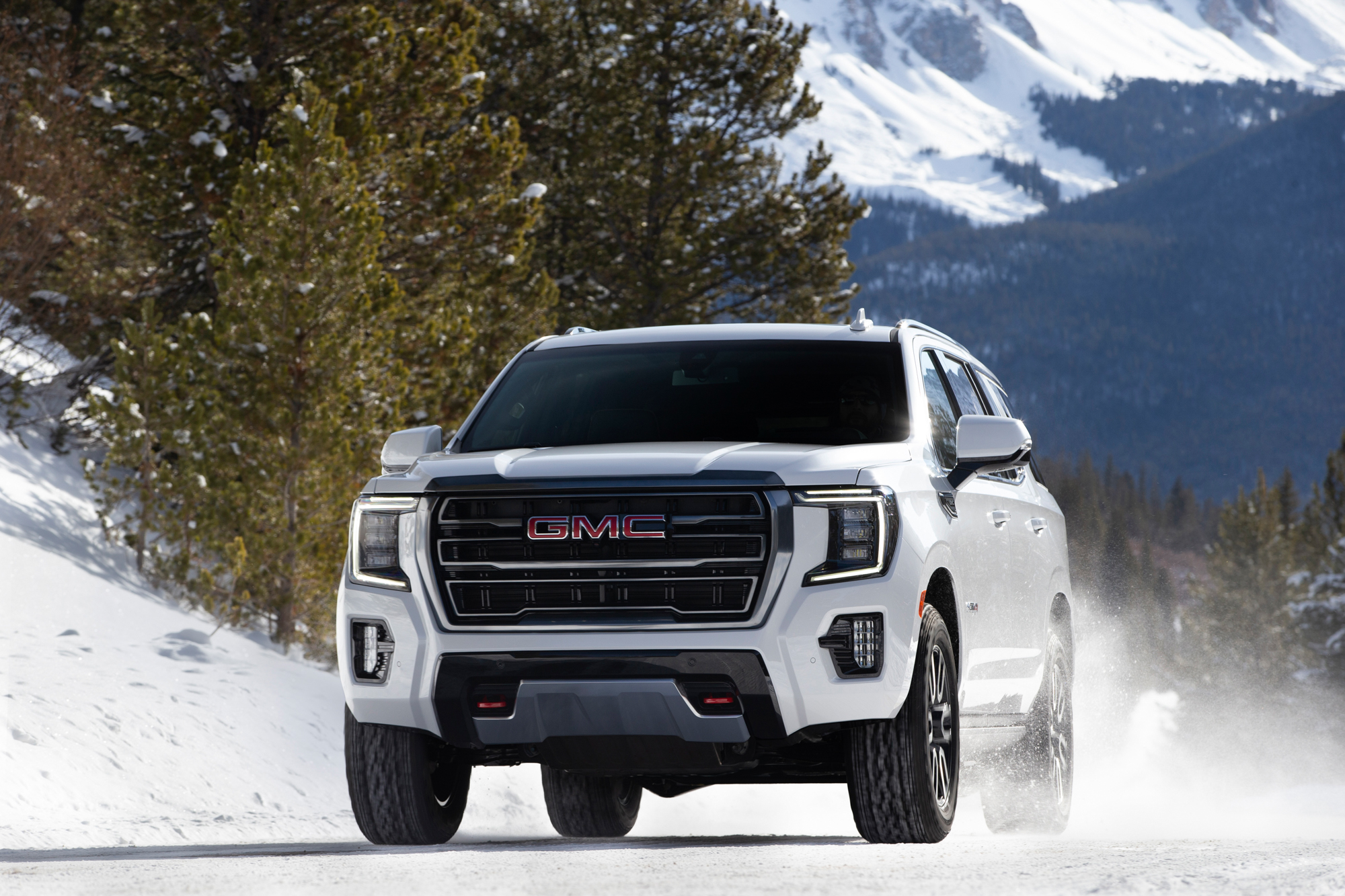 For the first time, the Yukon and Yukon XL will be available with an optional 3.0L straight-six diesel motor. It will be the same Duramax that we tested in the Sierra 1500 this summer, which you can read about here, and will, of course, be tuned specifically for the new Yukon platform. While no official figures have been published, I’d wager you could expect fuel economy to be in the twenties, with around 277 horsepower and 460 pound-feet of torque at 1,500 RPM. However, much to our dissappointment, the diesel will not be available with the AT4 trim. You can still pair it with the Denali, which packs the same air-suspension and rear limited-slip, but you’ll lose the skid plates, off-road styling, front tow hooks, and improved approach angle. Boo.

Even so, the AT4 package won’t be suffering from a lack of good motor choices. In fact, they can be equipped with the most powerful engine in the full-size SUV segment, an all-new 6.2L V8 with Dynamic Fuel Management. It pumps out 420 blessed horsepower, with an exhaust note from a quad-exhaust sure to make your heart beats faster. Of course, there’s also a standard 5.3L V8 that will get the job done, albeit with fewer smiles per gallon.

The standard suspension on all Yukons will be a four-corner coil-sprung independent suspension with magnetic ride control dampers. This gives the SUV precise body control and handling capability on the pavement, and can reduce bouncing and vibrations on rough terrain. For those looking for more clearance and flexibility, though, there’s the optional four-corner air ride adaptive suspension. This air-spring system replaces the coils and gives the Yukon a total of 4 inches of adjustable ride height. Why is this great? Because you can now lower your SUV down to slip in a garage with a roof rack or raise it to clear that high obstacle off road. While you’re cruising on the highway, it automatically lowers to a height that maximizes performance and fuel economy. It will also auto-level to compensate for added payload or tongue weight of a trailer, which means you’ll never have to worry about a sagging rear suspension or light steering. 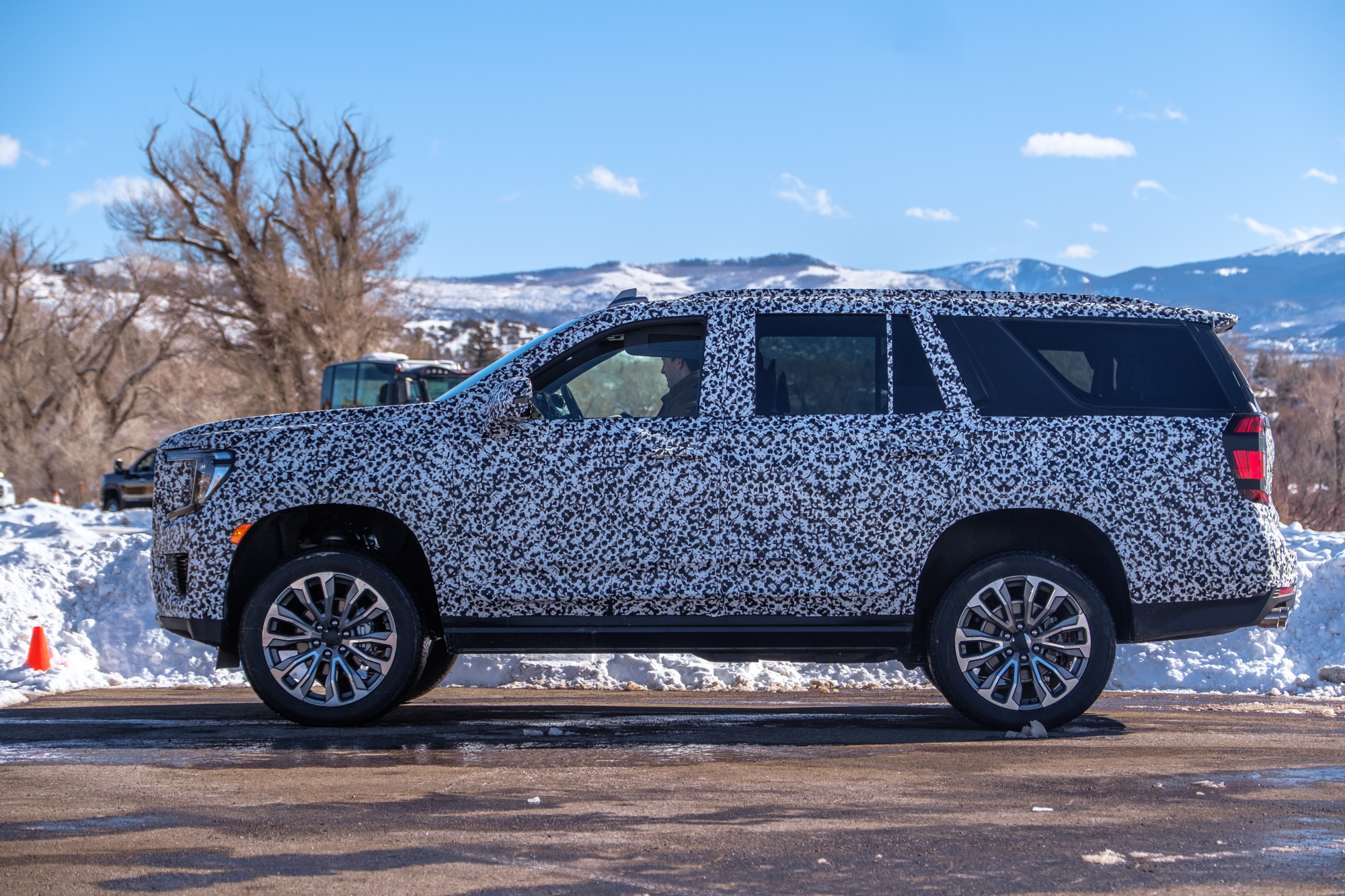 In addition to the electronic limited-slip, the Yukon can be equipped with a Traction Select System with Off-road mode. As you’d expect, this remaps the way the engine delivers power through the driveline as well as the settings for stability control to optimize performance in slippery or uneven road conditions. Then there’s the Hill-Descent control, enables the driver to set a pre-determined descent rate down steep inclines. This is especially useful in soft sand and snow where the computer can make calculations on braking pressure and tire rotation to keep the vehicle tracking straight down the hill.

The 2021 Yukon also has nine available camera views for self-spotting and towing, including an overhead 360, a front-facing camera, side cameras, and an optional rearview mirror camera so you can see what’s behind you even when there is cargo in the way.  This all equates to a much easier driving experience in tight conditions, be it in the parking lot or on a rocky backroad. There are also additional camera views to make towing easier, like an overhead of your drawbar for hooking up, extended blind-spot monitoring, and side-view cameras that display the trailer during turns to help you avoid swinging wide. 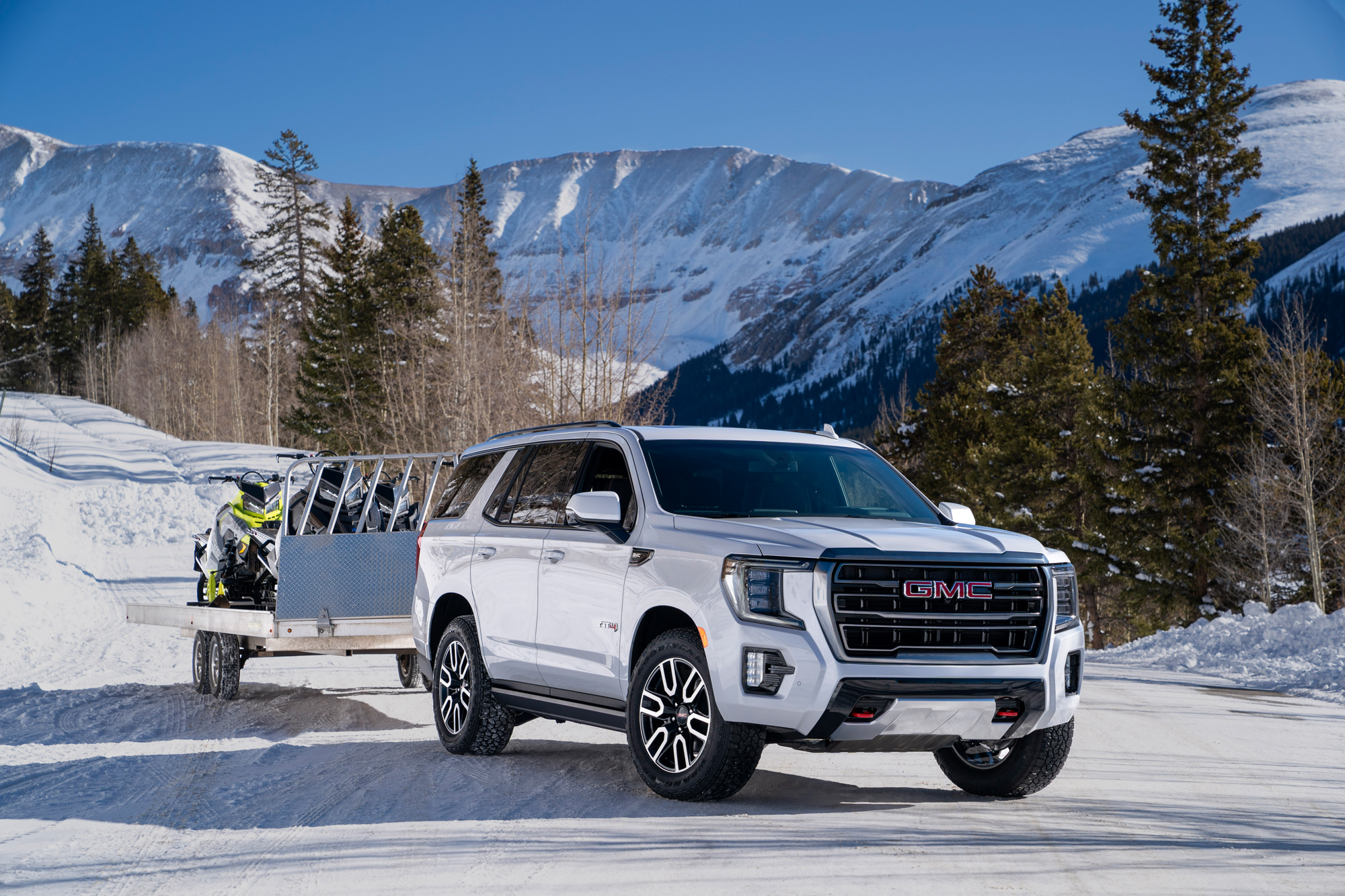 Sorry folks, we have no idea what the payload for the 2021 Yukon will be. What we do know is that current models have a max payload over 1,600 pounds, and that’s with the third-row seat installed. We’re assuming that the 2021 will be about the same, if not more, and that’s plenty of capacity for the family and any gear you want to bring along for the ride.

I’m sad to say that the driving impressions on this vehicle are brief. We’re being told that opportunities to drive them more extensively in the future will come, but for now, we at least were able to test them on a short snow track. Here’s what we can tell you.

For starters, the eLSD we mentioned earlier works like a charm. Unlike the G80 lockers used in some other GM trucks, there is no aggressive wheel spin and thump as it engages. We had the chance to drive it on an obstacle where the driver-side tires were on ice and the passenger tires were on pavement. Laying heavily into the accelerator, the Yukon seemed to hesitate for a moment as the wheel-slip began, but then quickly gained speed like there was no ice at all. The transition was nearly seamless. On the ramp, the gearing paired with the 6.2L V8 was favorable and the throttle response was quick and predictable. I felt the Hill-Descent Control was much smoother than in previous GMC’s I’ve tested, though that could have been because the Yukon was on an even ramp instead of a series of rocks. 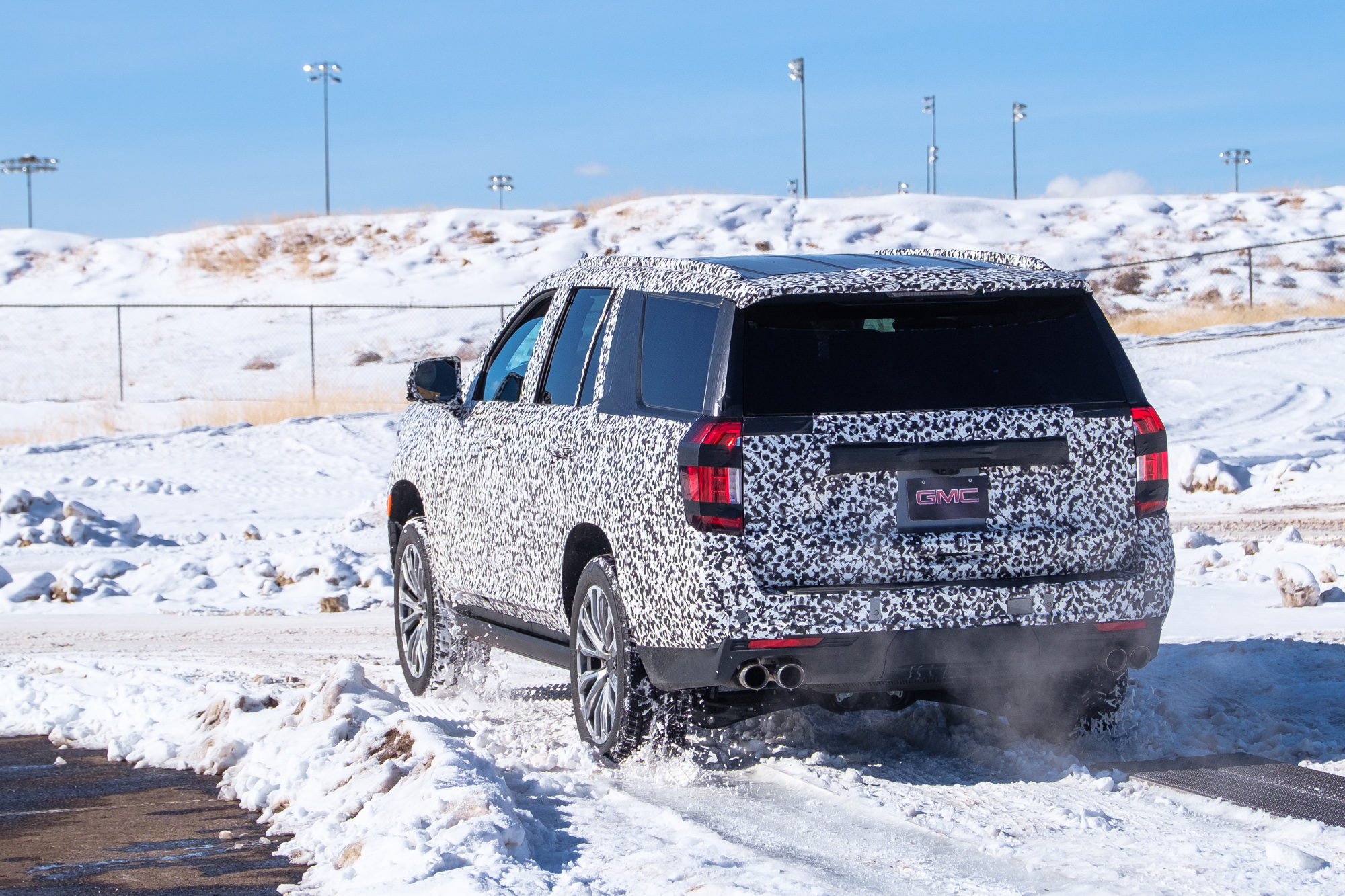 Well, that’s about all the impressions we can give you, which really isn’t a lot. It’s definitely not enough to say that we’d recommend buying the new Yukon or not, but I will say this platform has a ton of potential and I’m very excited about its future. The approach angle and ground clearance are more than what we’d need for many off-road tracks, and the ability to fit 17″ wheels and larger tires is a massive win. Assuming the traction control and eLSD work as well on the rocks as they do in the snow this SUV will be very well suited for the dirt. With an eight-person capacity, it should have plenty of payload, and the fold-flat interior will make it easy to sleep inside or haul cargo. Add in the tasteful lines and elegant interior and you’ve got the perfect SUV for driving to the office during the week and playing off-road on the weekends.

Pricing is not yet available, but we do know the Yukon is expected to hit dealers sometime this summer. Be sure to keep an eye on our website for future updates, as well as the GMC website here. 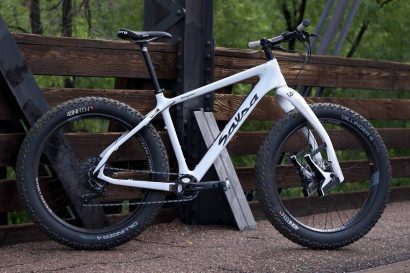 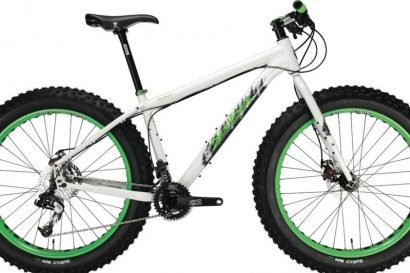 Salsa Mukluk 2, Falling in Love with Bikes all Over Again 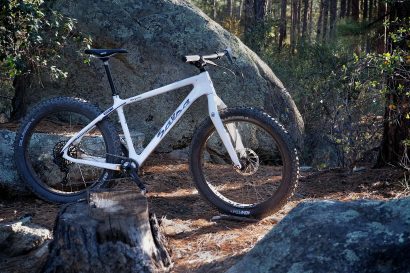