He’s about to suggest riding something I won’t like and will do everything he can to convince me.

Dave’s been scouring Google Earth and paper maps for a few hours now and has found a little side tour over Telkwa Pass—a rugged 71-mile “shortcut” in Northern, B.C., connecting Smithers to Terrace along glaciated, lake-filled terrain.

If you Google Telkwa Pass, it’s categorized as a hiking trail: overgrown and seldom used by two-wheelers like our GS bikes—information Dave omits while filling my brain with ego-boosting material he hopes I’ll draw on later: “Your riding has improved a ton in the last year,” and, “Remember the babyhead section you rode on the Washington BDR? I’m sure this will be easier than that.” 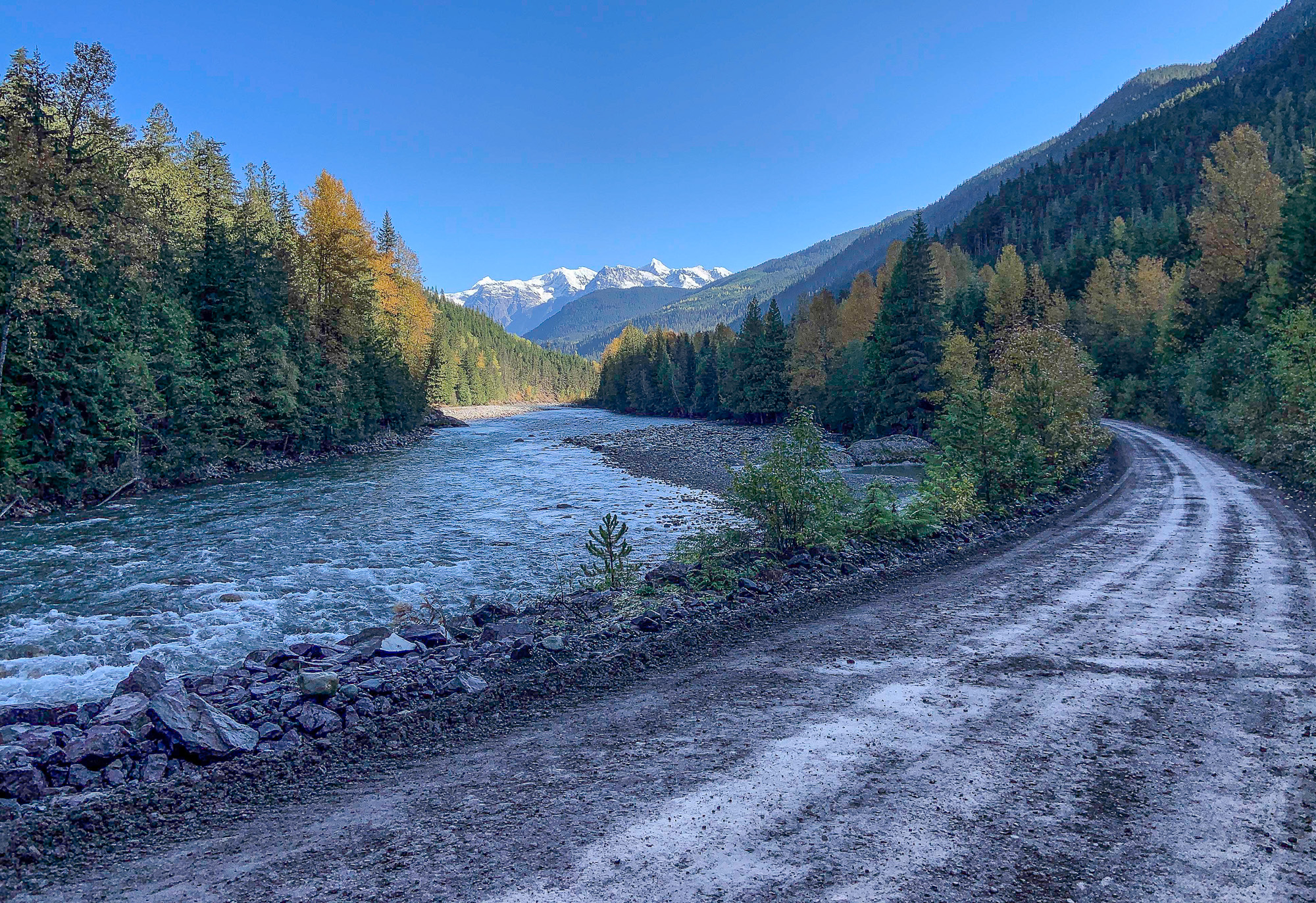 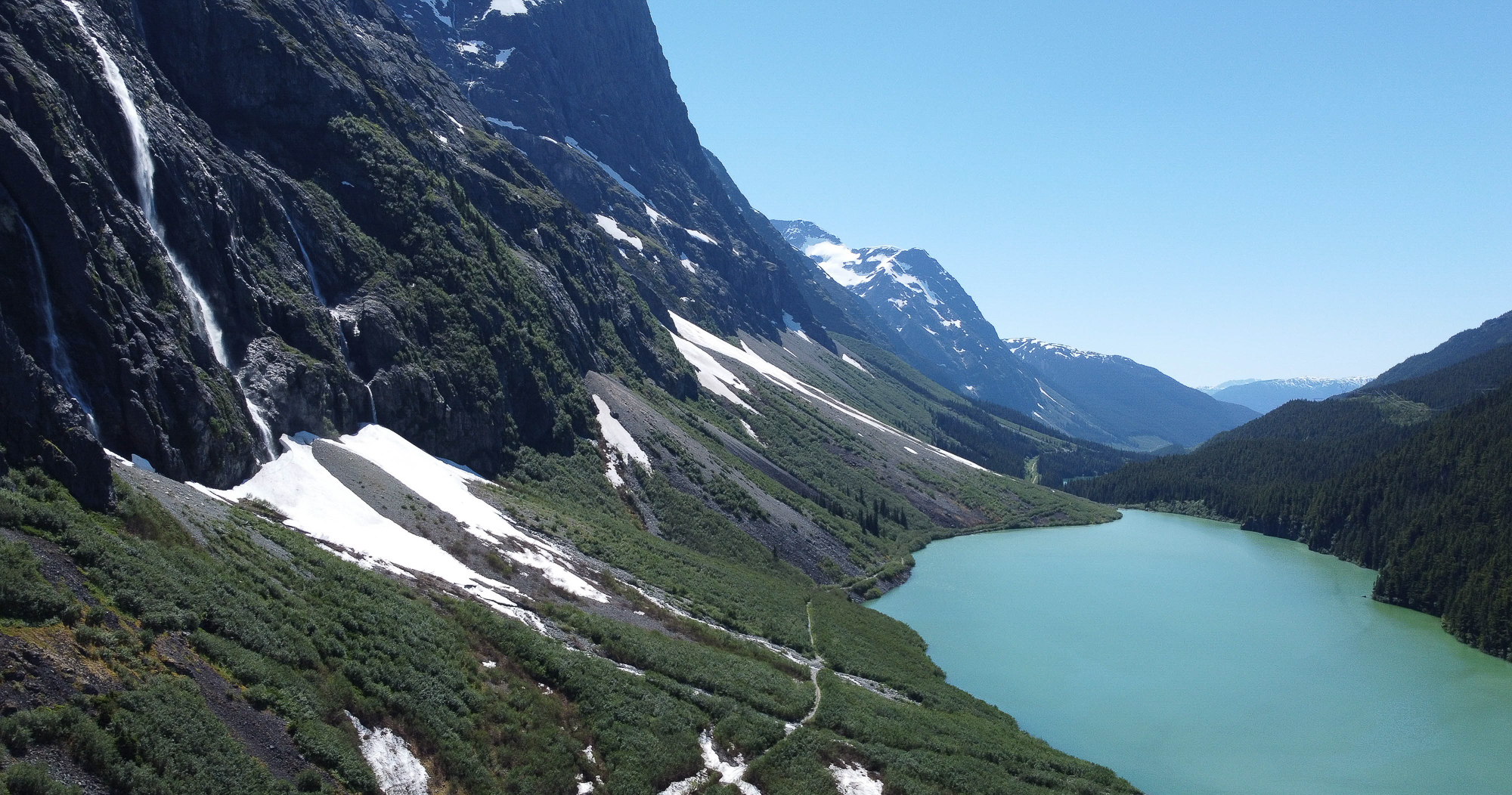 I bite. I love riding in places seldom seen or visited by other humans.

After following a perfectly safe logging road for several miles out of Smithers, Dave stops by an old wooden sign that says “Trail” and points into some shrubs. 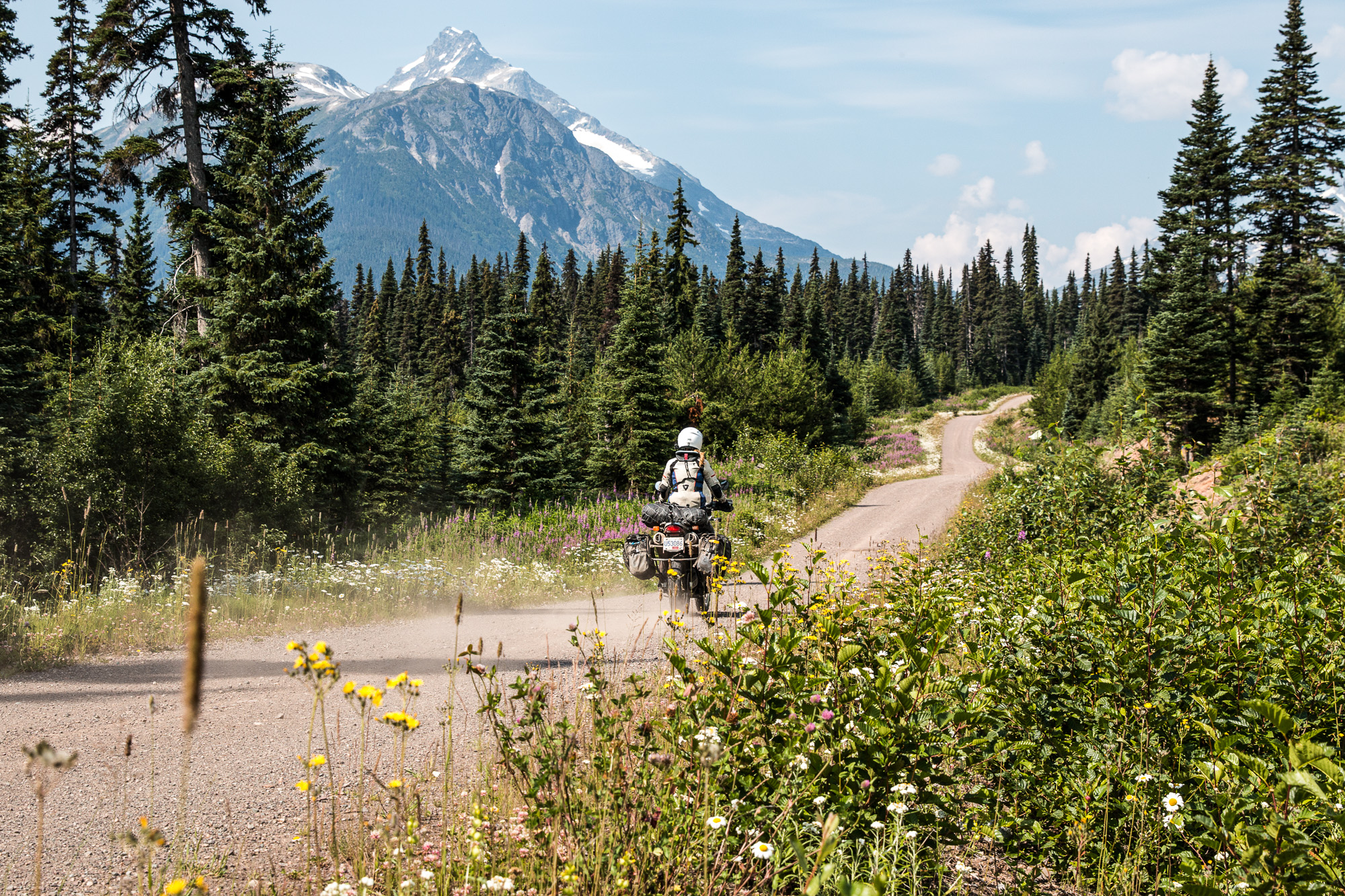 “Look, it’s even got directions!” he says, standing by the sign and giving me a thumbs-up. “How bad can it be?”

Through the bushes, I make out a vague single-track leading into god knows what. 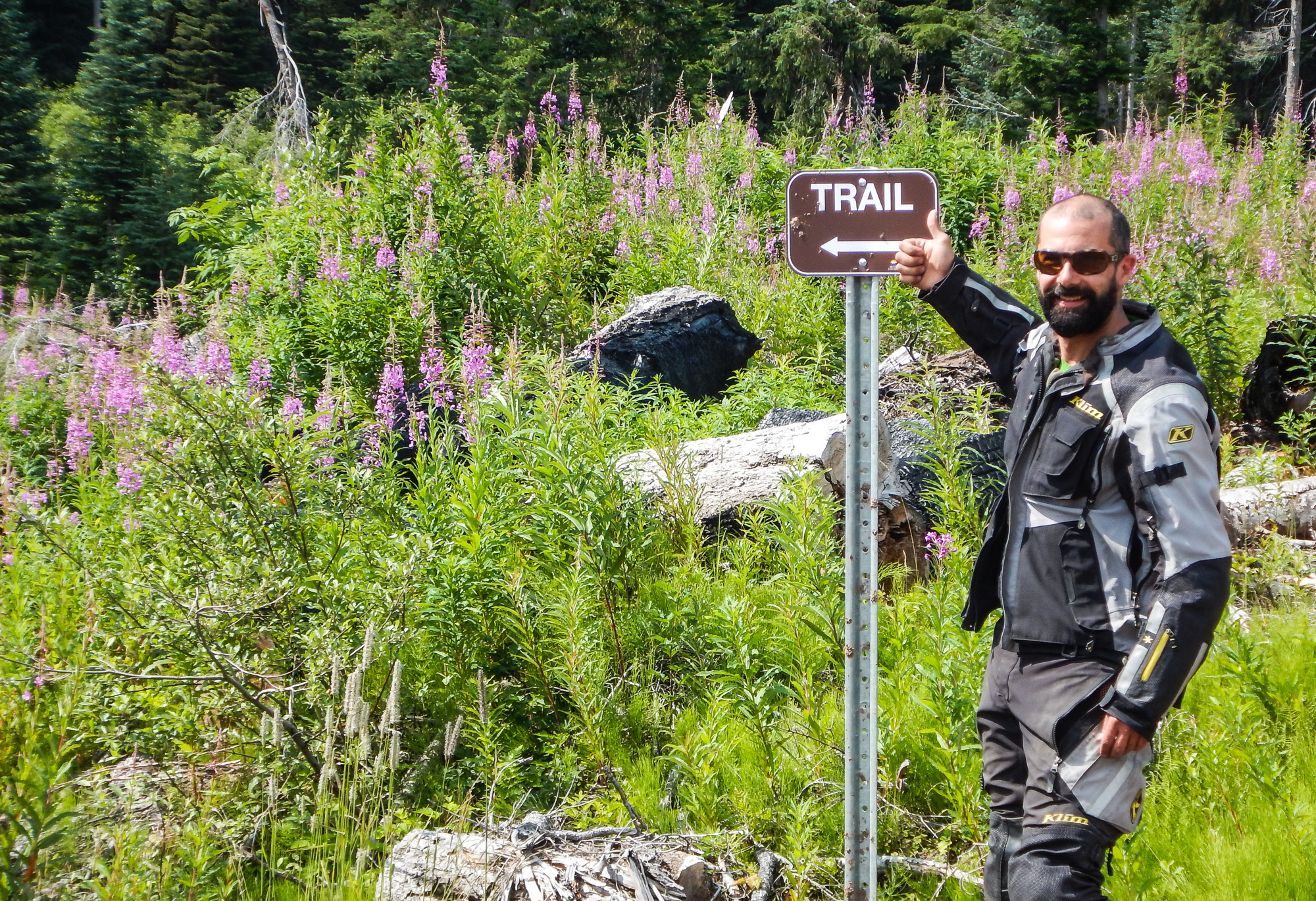 Purple fireweed and white daisies surround us, waving slightly in the breeze. The air smells like vanilla on a day that feels innocent and lazy; I just want to lay in the sun.

Dave’s eyes are on me. He’s waiting for me to yay or hell no the trail.

“Let’s try it.” I reach to start my bike. Curiosity wins me over.

Getting through the bushes isn’t so bad. Soon after, the way opens into a double-track quad trail. I think, This is going to be easy; I’m so glad I agreed to come here. A mile later, we are swerving around steaming piles of bear scat, produced with pride and left on display every hundred meters. Digested berries simmer in the hot mess where flies feast, smelling like wet dog and old fish brought to boil. I can’t tell if the poop is from a grizzly or black bear—on the crest between forest and alpine, it could be either.

I maniacally honk my horn to alert whatever’s ahead, but the beep beep sounds lame and unthreatening. 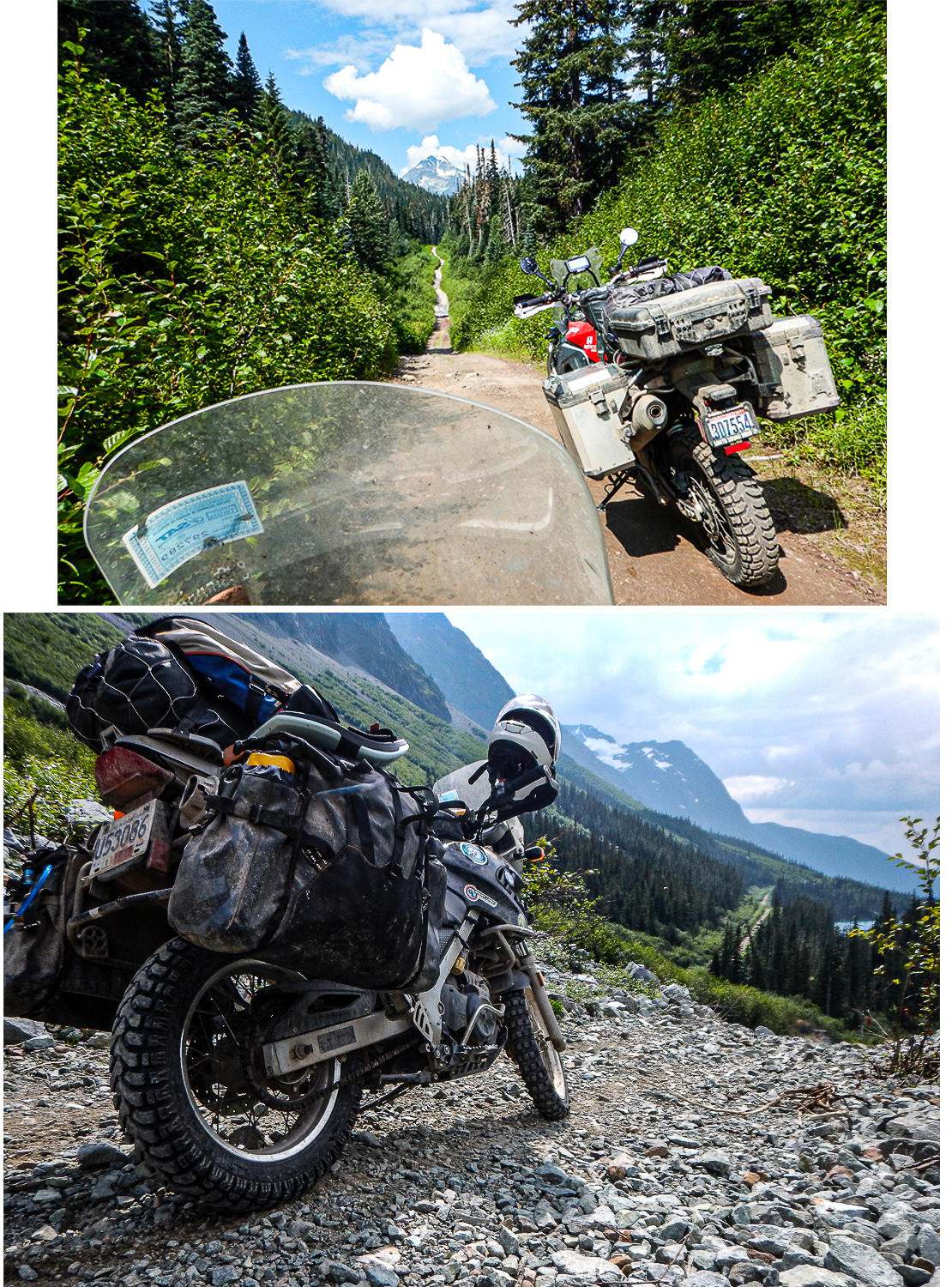 The trail has become overgrown and claustrophobic-feeling. Steep up and down sections come at frequent intervals. My front tire hits embedded rocks, sending me into unplanned wheelies. I fall over a few times. Dave helps by riding my G 650 GS through some of the worst sections. While he does that, I walk behind, eating blueberries off red bushes. When Dave crashes going downhill in loose dirt, I stop mid-chew. He’s okay, but he’s never crashed my bike before.

An emerald-green lake beckons us for a much-needed break. We ride onto the beach and put our side stands down on flat rocks. 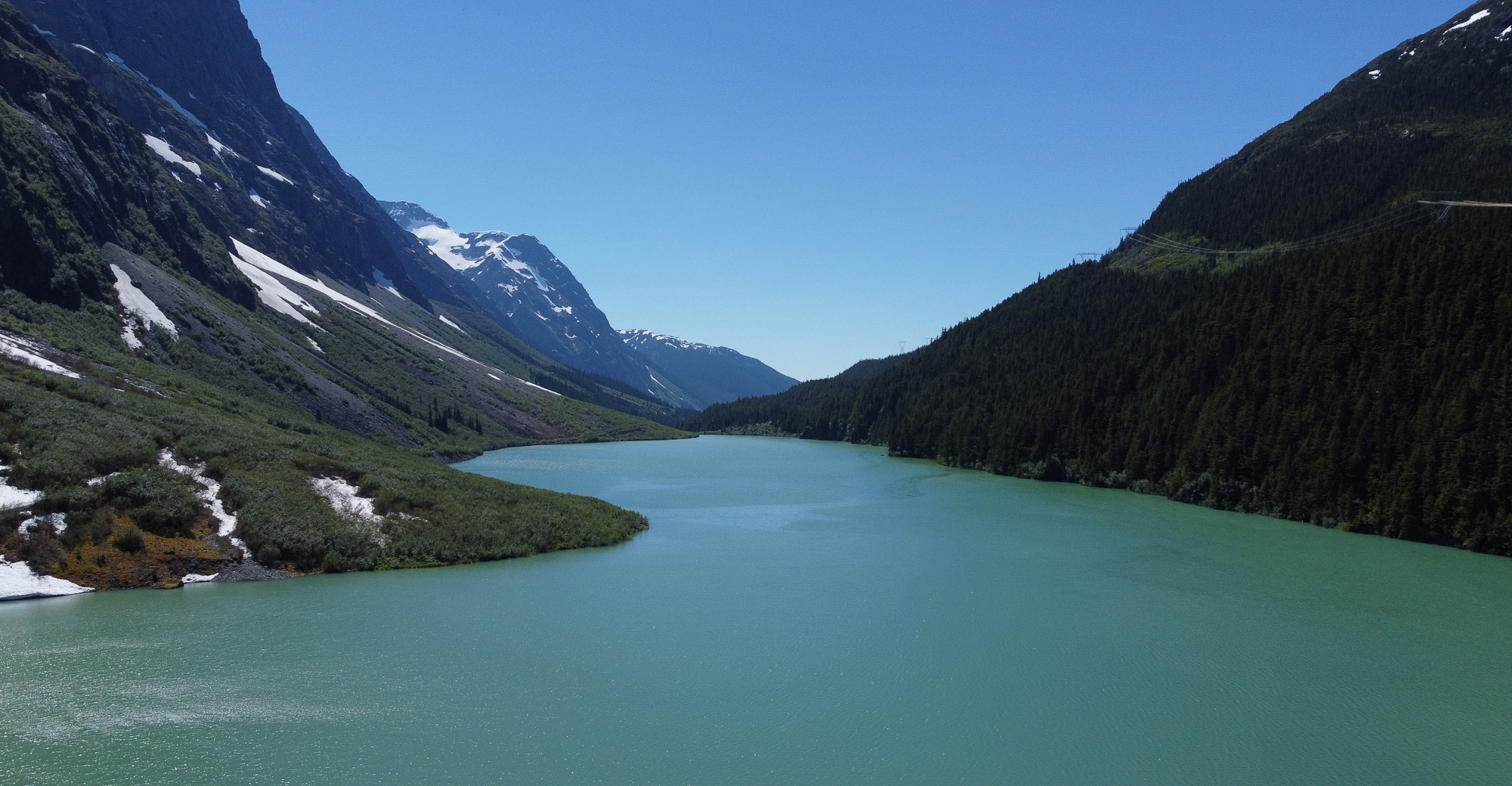 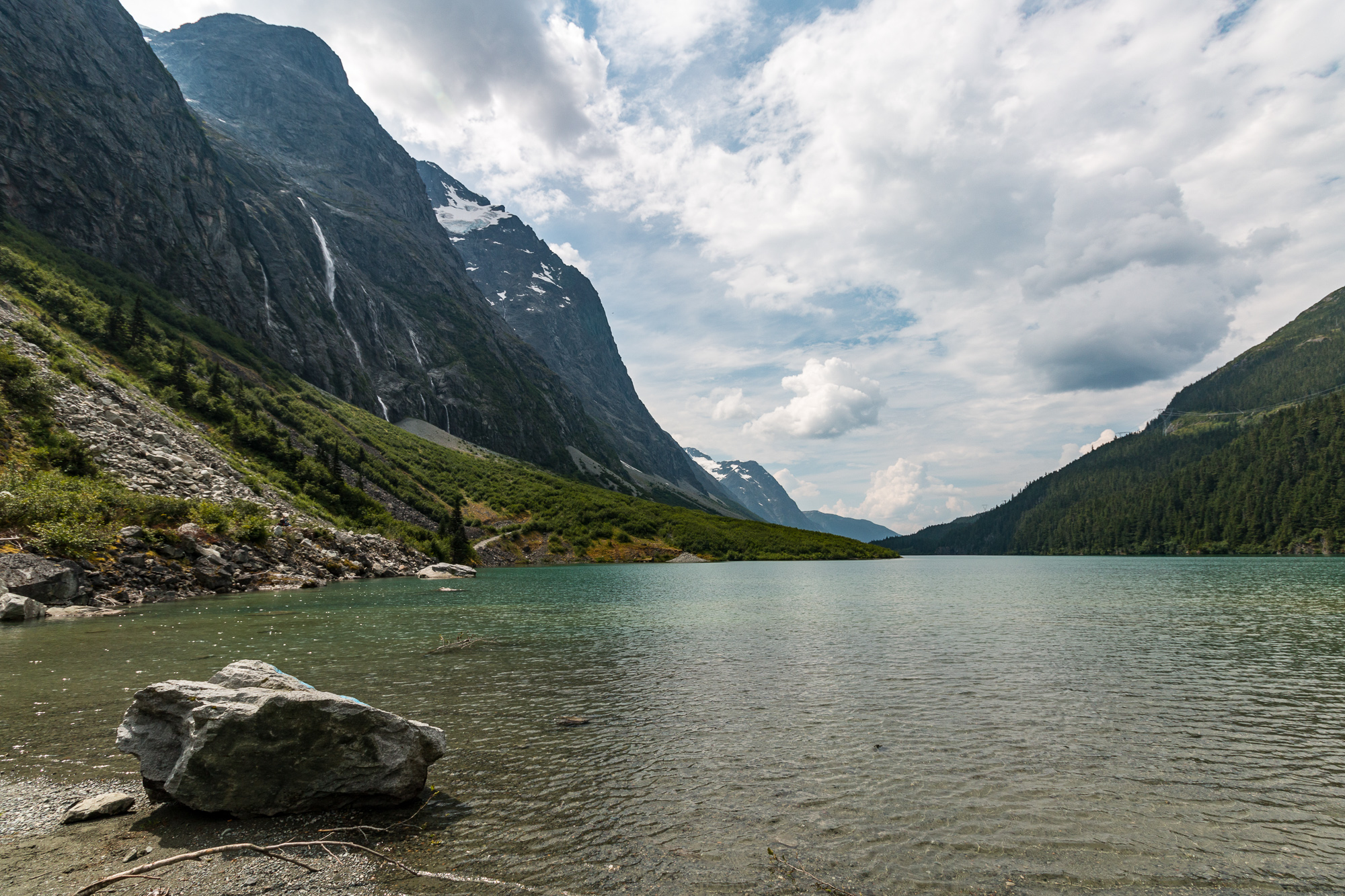 “I hope the road gets better,” Dave says, unbuckling his riding boots to let out his steaming feet. I refrain from commenting about the trail’s difficulty and strip, walking along sun-warmed pebbles into the freezing water. Immersing myself slowly at first, I watch a not-too-distant glacier melt into streams that run down the mountain into the lake. Knowing I’ll appreciate it later, I do a quick dive, then surface, gasping. The sweat and dust are gone, for now. I return to the beach, letting the sun dry my skin. Dave rolls up his riding pants and walks toward the water lapping the shore. With his back to me, I see salty white lines of dried perspiration criss-crossing his dark merino wool t-shirt.

An engine buzzing nearby forces me to scramble for clothing, then an older couple rolls onto the beach on a quad.

“Wow,” the man chuckles past a mustache yellowed by nicotine, “you guys must be having a hard time with those beasts.”

“Yours looks like a much better choice,” Dave admits. “Where did you come from?”

“The same way as you,” the man replies, his voice deep and knowing. “We noticed your tread patterns in some of the dirt.”

“I guess you can’t tell us how much worse it gets then,” I say. “Unless you’ve been here before?”

“We’ve been here before, but I’ve never seen the trail in such bad condition.” 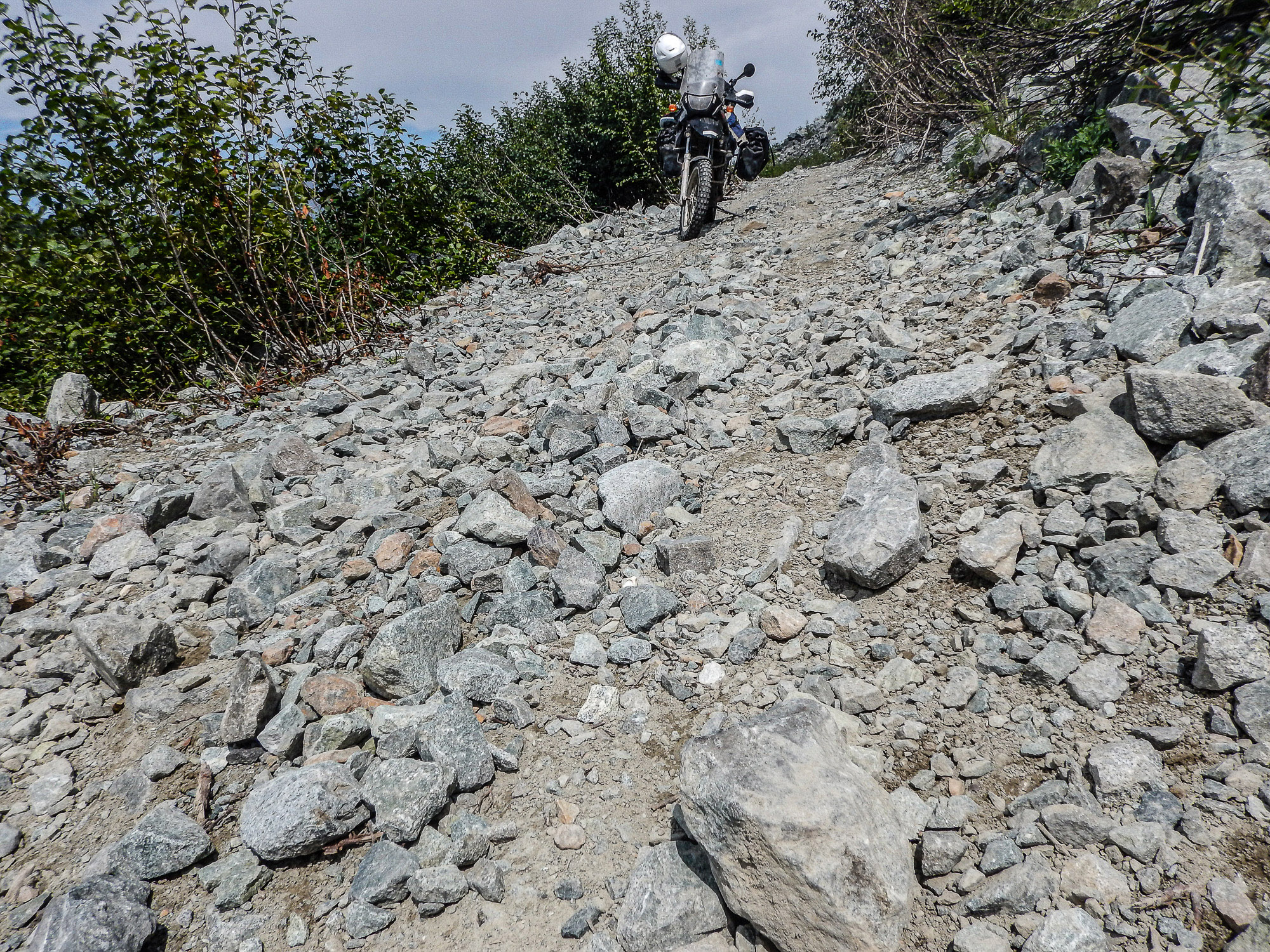 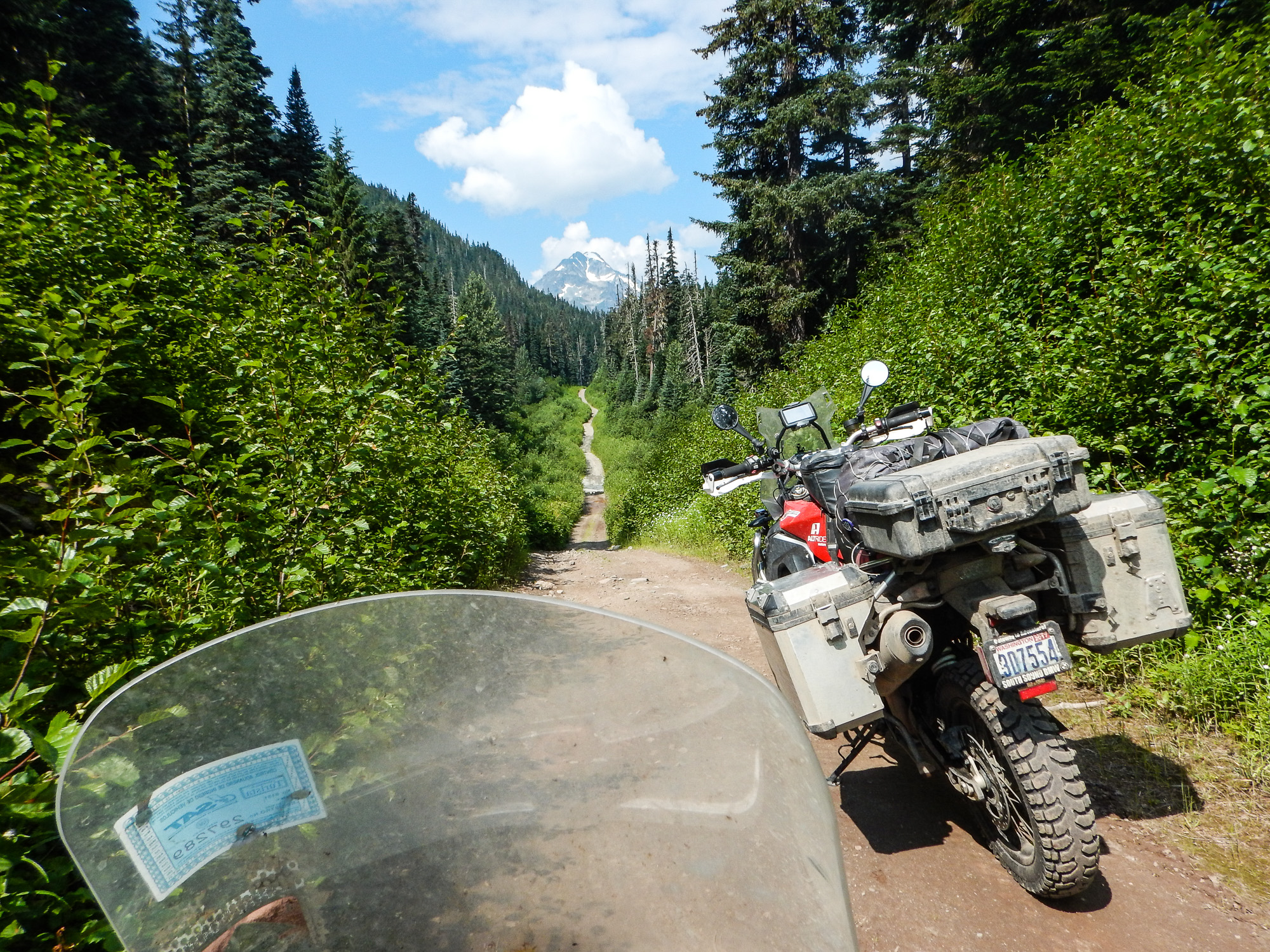 A harsh previous winter and the resulting runoff from snowmelt caused most of the damage and soil deterioration.

The couple wave and carry on. In a few minutes, I see them cresting a hill at the end of the lake, where we’re headed.

“We should get going.” Dave packs up our orange peels and salami rinds.

Fifteen minutes later, I’m dying for another swim and those peaceful moments on the water. Mountains have broken and spilled over our path, leaving behind rocks the size of toaster ovens and larger. In a steep uphill section, I don’t have enough momentum, and my rear wheel spins in the shifting rocks. I start to fall over, but with a strength I don’t know I have, I keep the 475-pound machine and 60 pounds of luggage upright—we’re in the middle of a round-the-world trip, and I lament the extra weight. 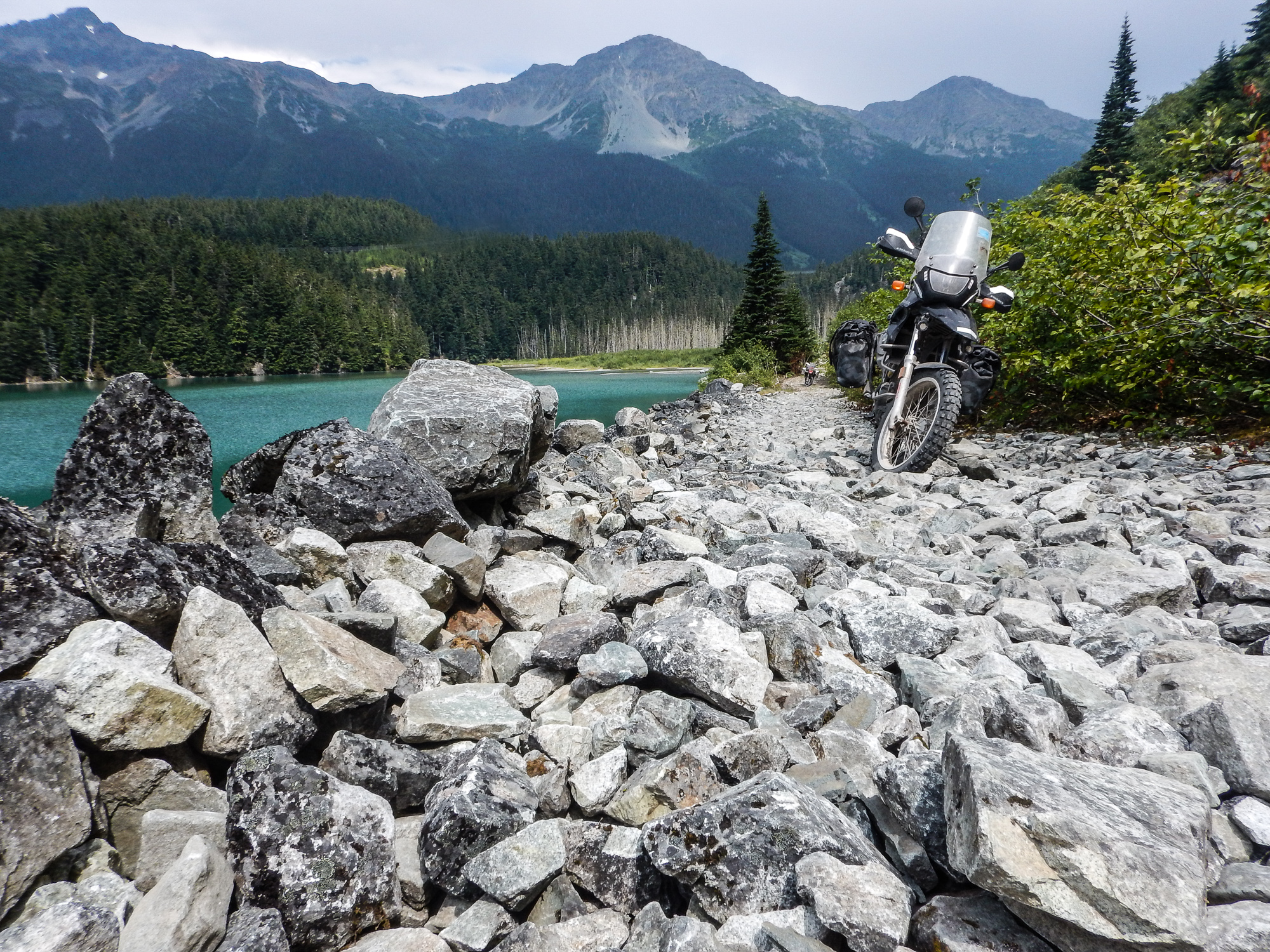 Balancing on tiptoes, I rock forward and back, burping the throttle, but I just dig a deeper hole behind me. At the same time, the front tire tunnels in with nothing solid to roll over. Sweat drips down my temples inside the full-face helmet. All I can think of in this middle-of-nowhere place is one of us destroying a bike or getting hurt.

Dave’s F 800 GSA has more torque than my 650, which helps tractor him up the steep, loose bits. He’s comfortable riding faster and stays afloat. When he returns to help me, he revs the 650’s engine while I stand in the sketchy zone behind the rear tire, pushing. Dirt and rocks spray my legs like bullets and I’m glad for my padded riding pants. I keep the visor down on my helmet. At last, Dave dislodges and shoots off. I watch the tail end of my bike lash like a fish on land. 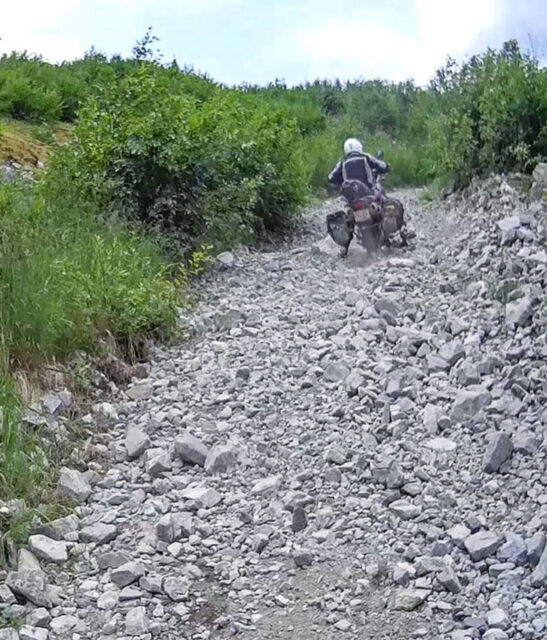 We get through the rockslide, but there is little relief on the other side; alder branches slap us in the face and arms while we ride. Two hours of hot, exhausting work, and we’ve only covered six miles since the lake.

After almost a year of riding through a dozen-plus countries by this point, I feel more confident with river-crossings, loose dirt, and rocks. But Telkwa Pass was like shaking all that stuff in a jar, dumping out the contents, then being asked to ride it on a unicycle.

Dave has just gotten my bike over another section I can’t manage and turns to hike back for his own, when we run into the quad couple on their return.

“You guys need some help?” asks the man, pulling alongside us. They looked concerned to see only one bike and what little progress we’ve had since lunch.

The three ride off, Dave sitting side-saddle beside a cooler on the back. The sudden quietude stills my beating heart. Moments ago, all I could hear was a revving engine and my own cursing. Now, I sink into an almost meditative state. I notice the sound of a creek nearby, then whiskey jacks and chickadees. Looking high above, I realize I’m standing at the base of an old avalanche path. Trees and shrubs have been shaved away by the immense power of moving snow acting like a razor. New life pokes up in the form of dazzling red and purple wildflowers and vibrant jade green plants. Bees and butterflies flit through the colorful vegetation. 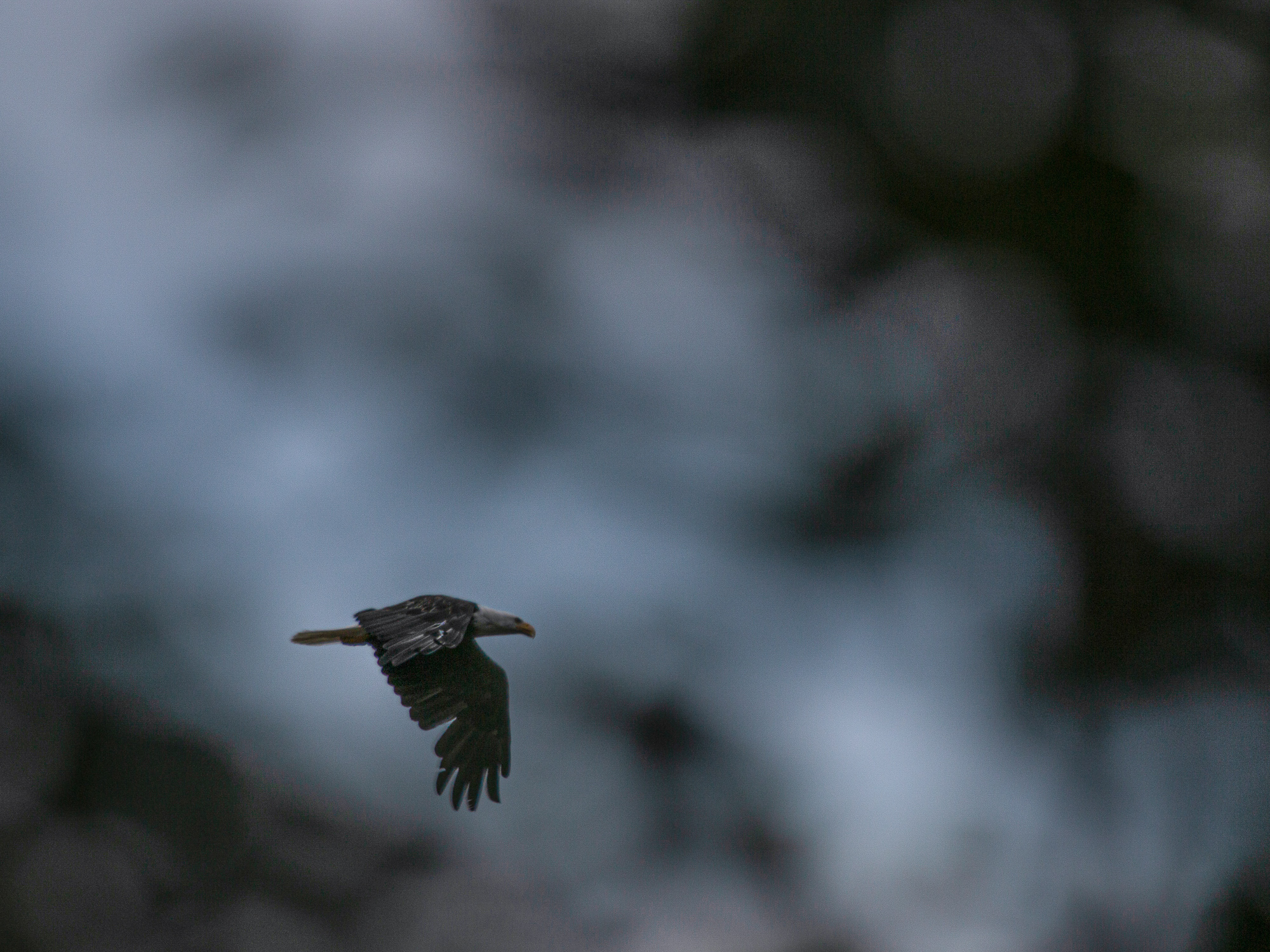 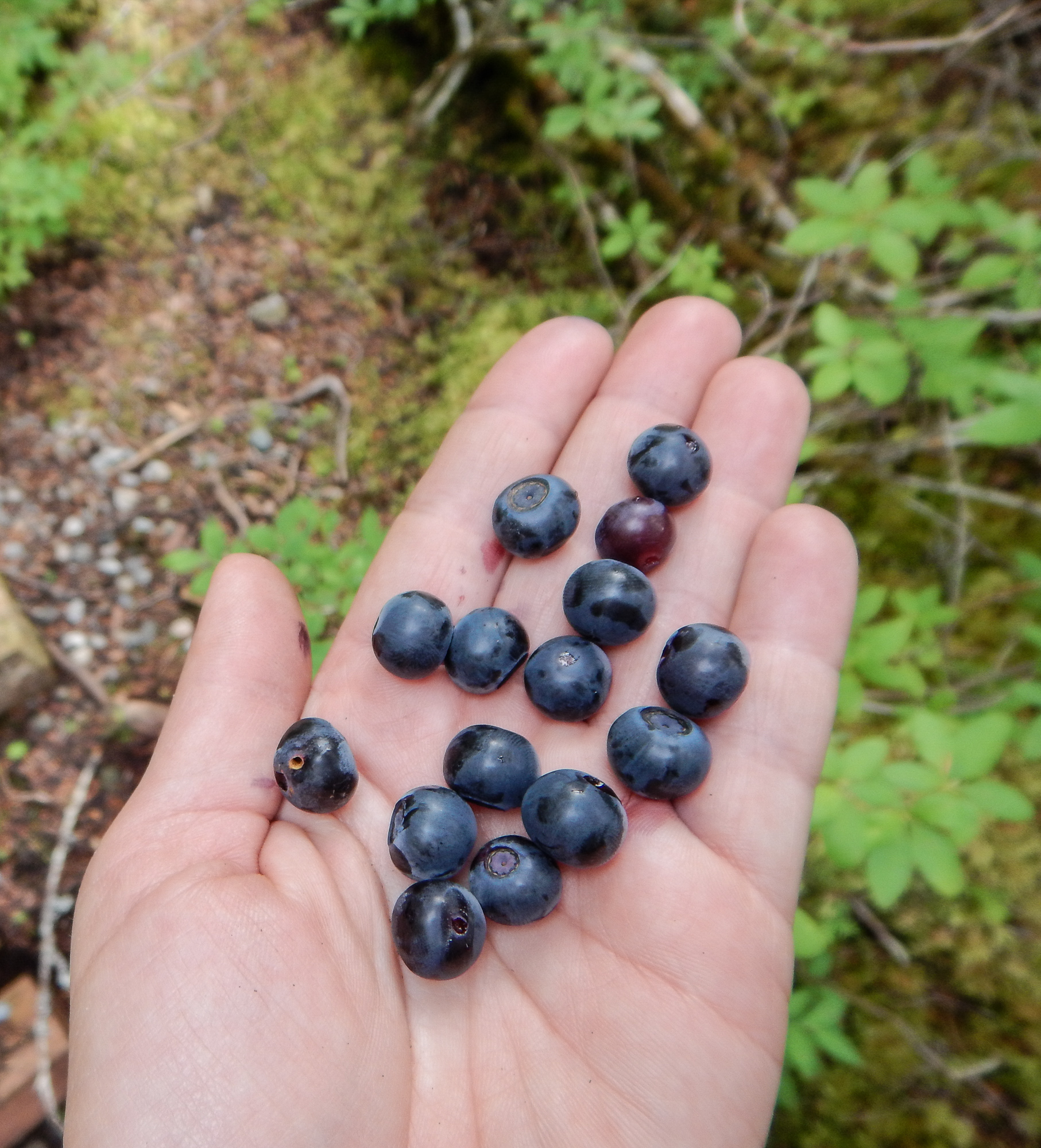 What I remember most about that day riding Telkwa isn’t worry for our wellbeing, but instead the scenery few people get to see; eating luscious, fat blueberries by the handful; fragrant alpine flowers; glaciers frozen mid-spill over steep mountain faces, and—of all things—a parked logging truck facing us later that day when the trail turned back into a road—the first sign that the rest of the way out was going to be much easier. 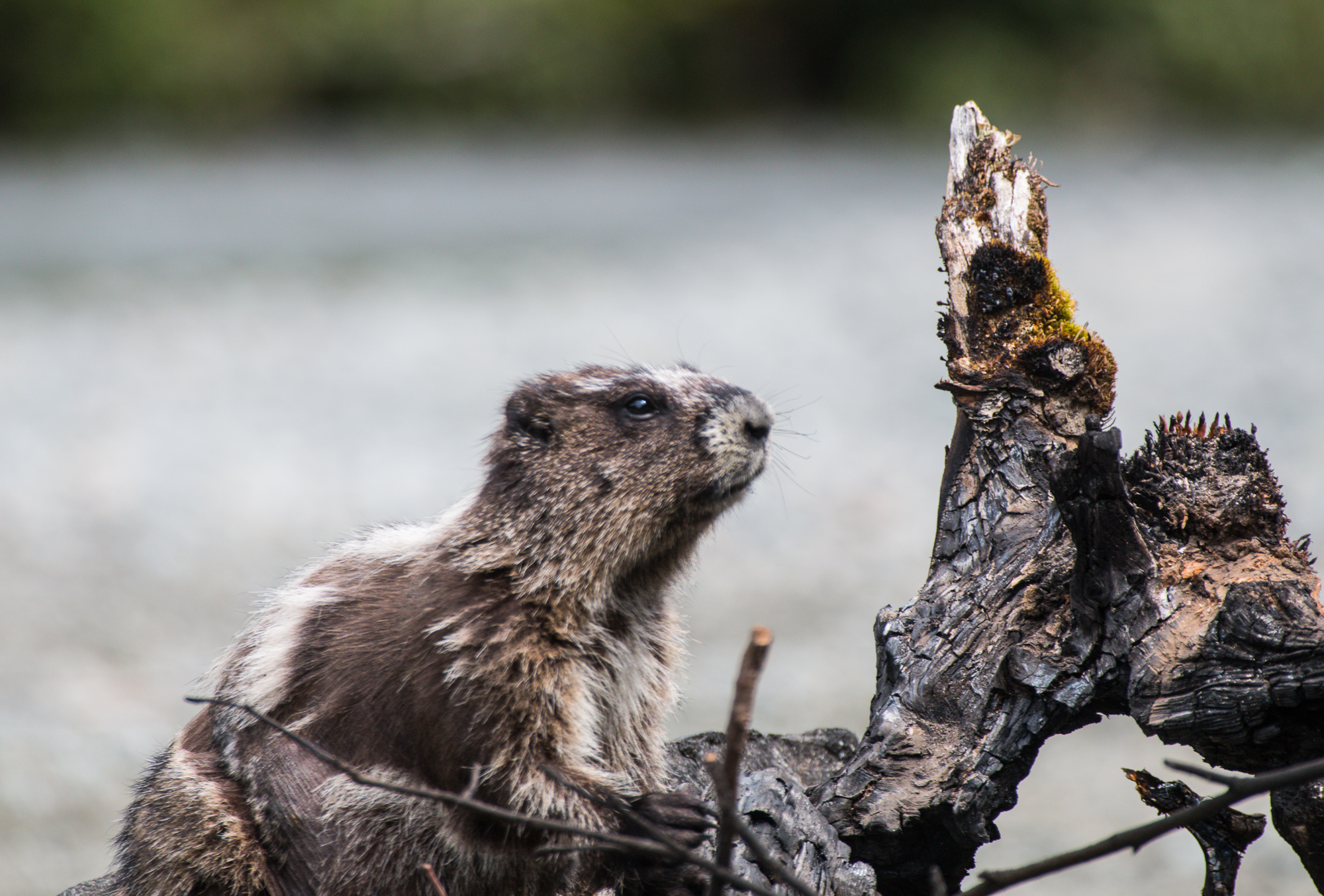 Sometimes, you just need to see if you can. 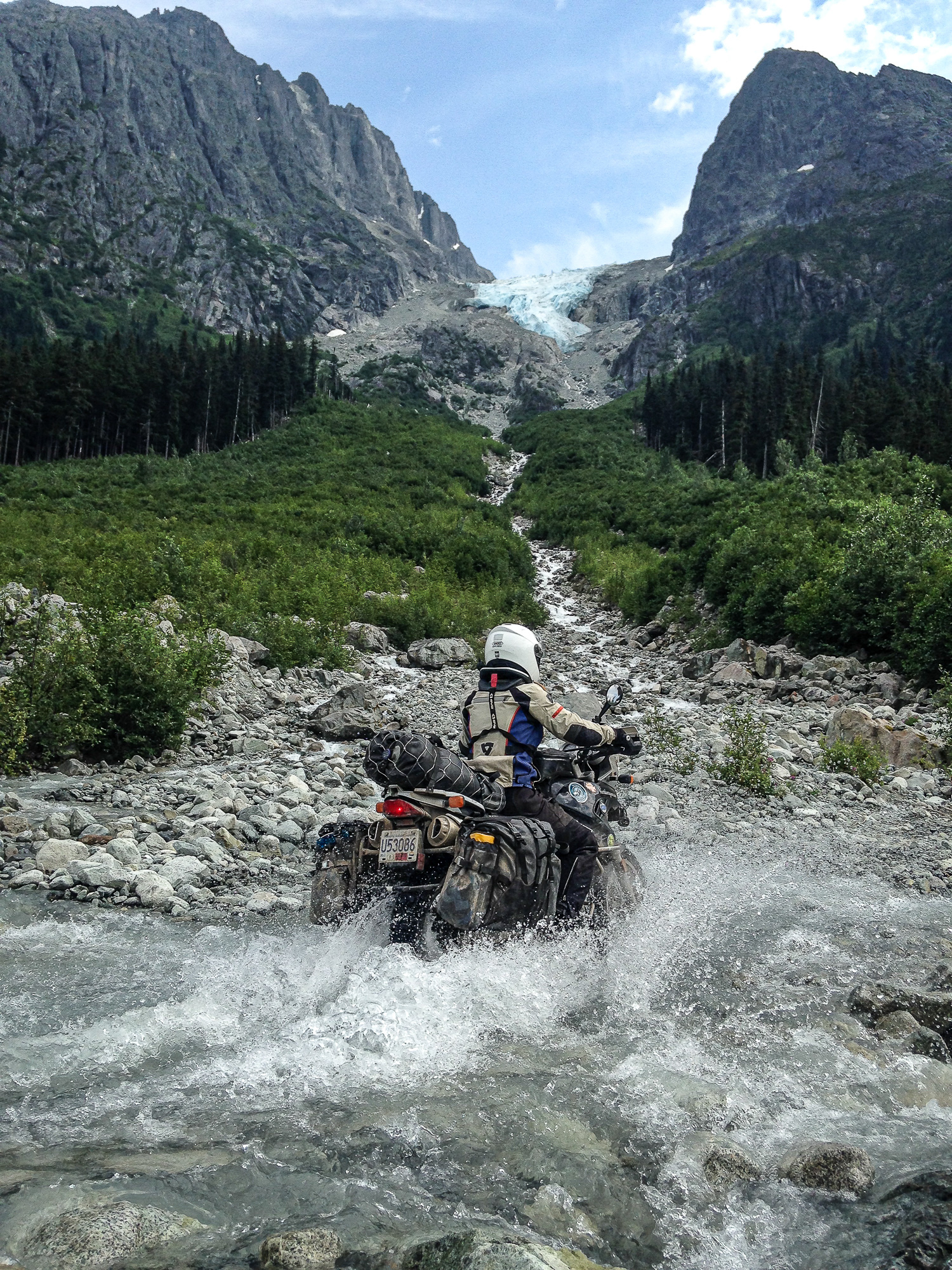 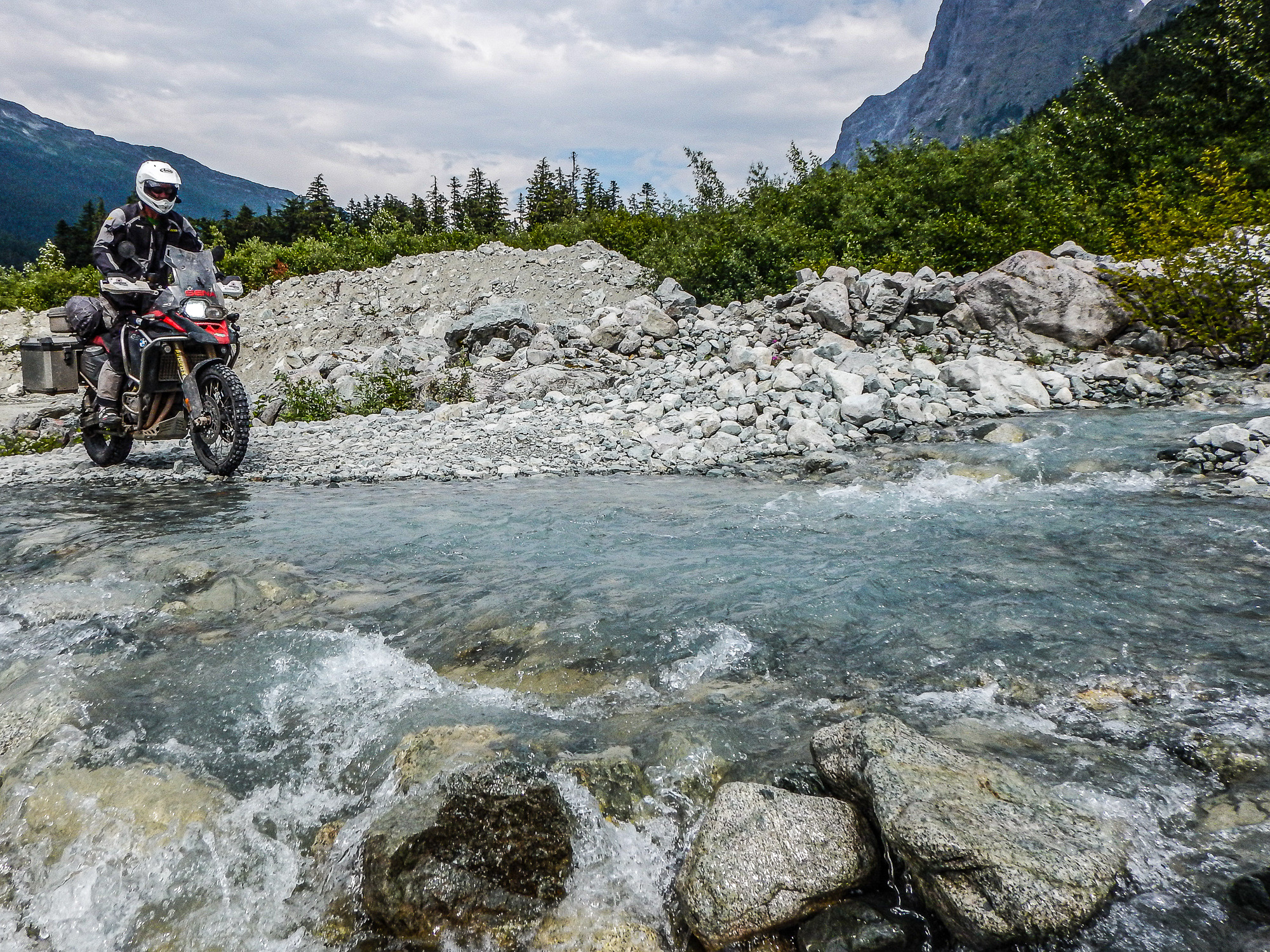