Anxiety is not a word often associated with overlanding, but if you are adventurous enough to test the limit of your courage, you will experience your fair share of this symptom. I am not merely referring to the pre-departure turmoil (particularly the intercontinental let’s sell it all and see what happens journey) but more specifically, the nonsense you will get yourself into when you are tightfisted and reluctant to admit your sporadic but persistent fear of the dark.

And it is exactly the penny-pinching, long-term overlander mentality which tends to get us into the most precarious (or potentially precarious) positions. The eternal search for free camping can often yield the most wonderful results, but will often also lead to the most terrifying evenings. Particularly if you, like me, share an overactive imagination with an easily petrified spouse. 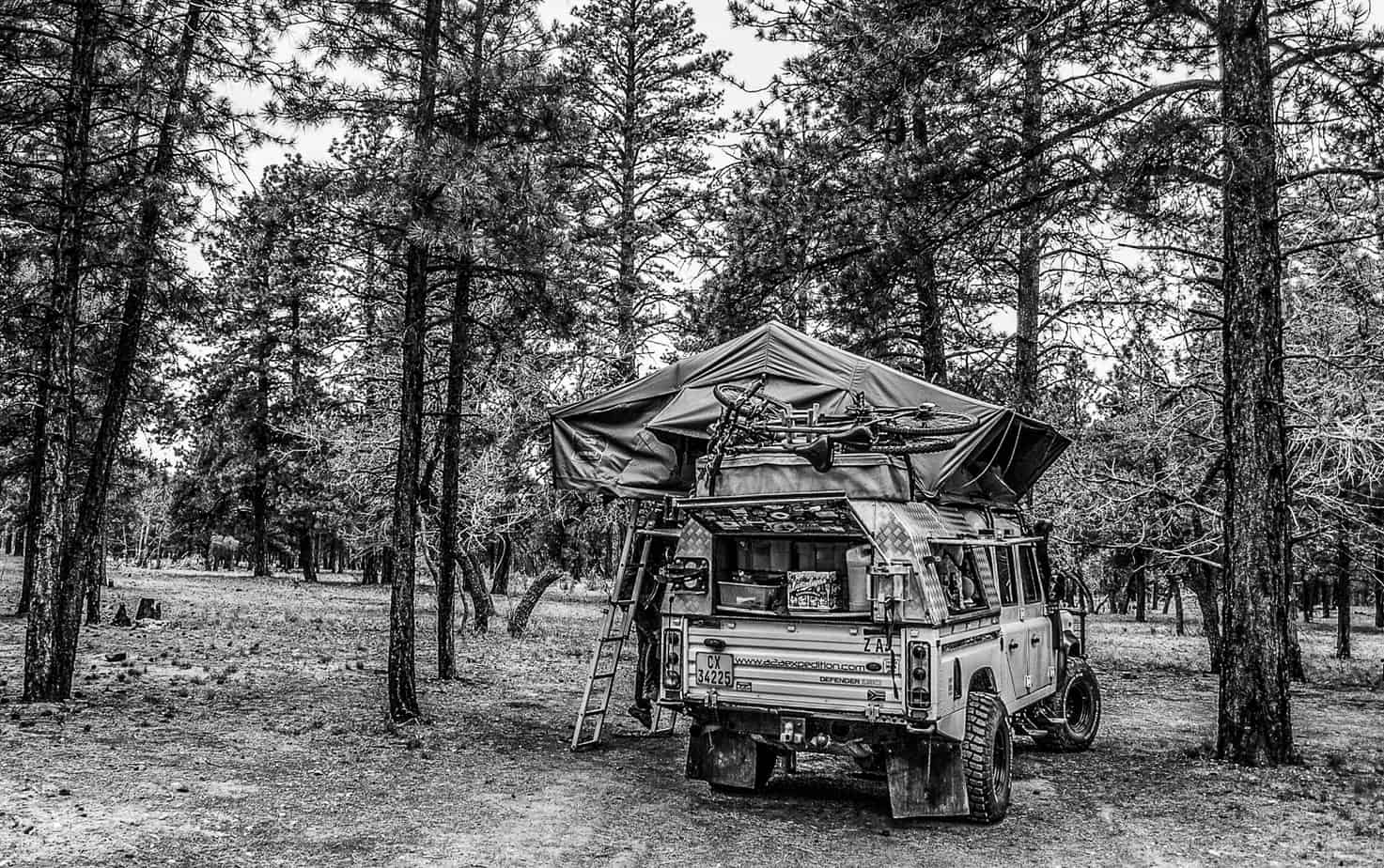 Let me explain. When I was 8 or 9 years of age, my older brother and his teenage friends thought it would be great fun to force me to watch a horror movie. Their choice was a 1981 production called The Burning and it has haunted me for years. Here is the plot summary from IMDb: “A former summer camp caretaker, horribly burned from a prank gone wrong, lurks around an upstate New York summer camp bent on killing the teenagers responsible for his disfigurement.” I would never be the same.

Even as a large-boned, relatively courageous, and mildly superstitious man, my inner child is sometimes totally beyond control. One evening on a farm back home in South Africa, I stepped outside to turn off the sprinkler. We had just watched the movie Signs, and the faucet was a good distance from the farmhouse, next to a cornfield. As I reached down to close the faucet, the corn shuddered in the breeze. I turned stiffly and briskly headed back the house. A breeze bristled again through the cornfield, and my inner child freaked out. Don’t run, don’t run, don’t run! I ran, convinced that the aliens were on my heels. The faster I ran the more frightened I became. I reached the door, grabbed the handle and turned it, ready to slam the door behind me and walk nonchalantly back into the living room. The door was locked! My wife, Luisa, stood behind it laughing a hysterical cackle while I begged bravely to be let inside. I was 33 years old. 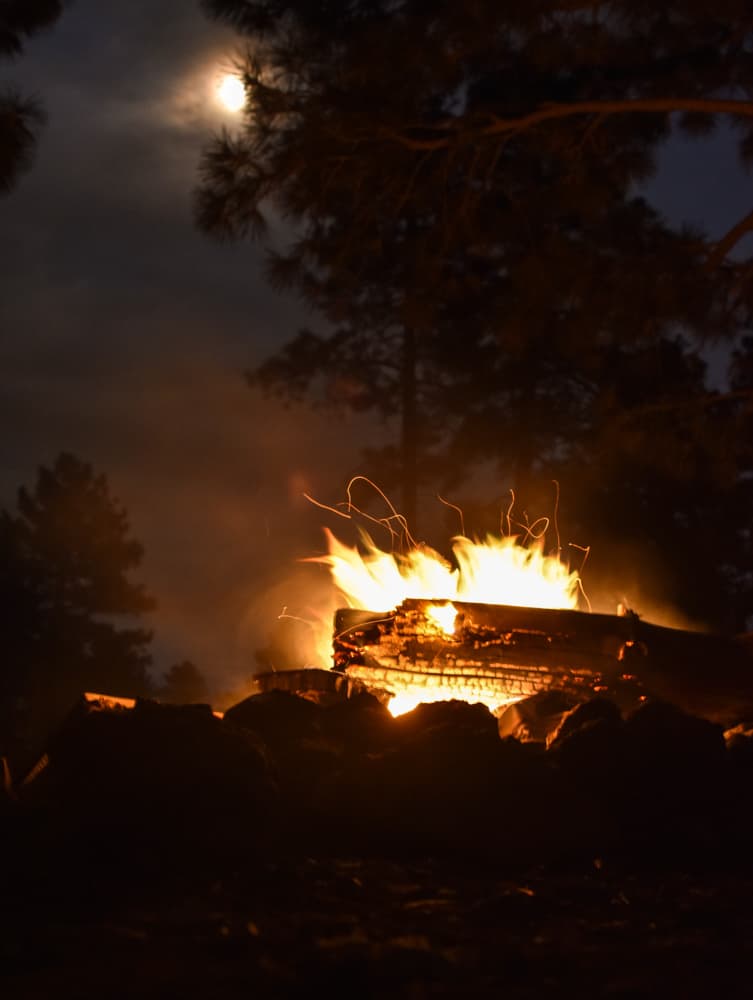 Shortly after foolishly watching The Blair Witch Project, an opportunity for revenge presented itself. Beside a grey forest, a quarter mile from the house, a large gate controlled access to the farm. Our modus operandi was for me to wait in the Land Rover, while Luisa (who was also traumatized by her older brothers) would unlock and open the gate. I would then drive through while she hurriedly closed and locked the gate after me before quick marching it back to the truck, her inner child barely under control. We returned from work one pitch-black night, as I innocently chatted about the scariest movies I had ever seen, priming her imagination for the coming retribution. At the gate, she asked me to get out and open up. I told her not to be silly. She reluctantly stepped out and quickly opened the gate. I drove through and did not stop, a chorus of petrified, furious screams and running feet following me up the driveway. She was 32 years old. 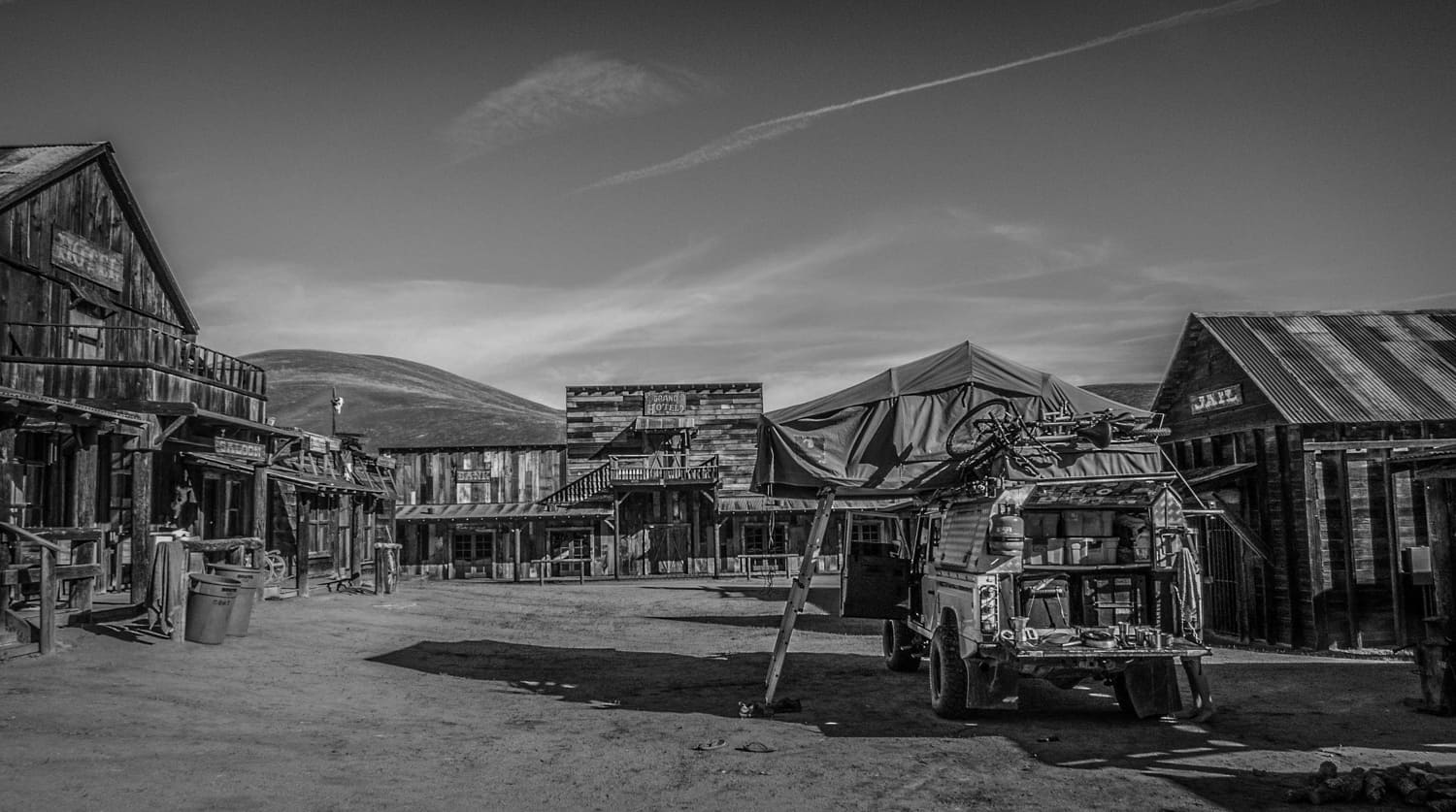 While overlanding Africa and South America, our fears were mostly limited to wild animals, thieves, and the ubiquitous Brazilian werewolf, or Lobisomem, which we were fortunate to encounter only twice.

In the U.S. our imaginations were ignited by the very landscape where we free camped, the same landscapes which provided the settings for a thousand horror movies. Our first night free camping was just off the South Rim of the Grand Canyon. A kind Native American ranger had told us about an area of BLM (Bureau of Land Management) land just outside the national park where we could escape the crowds and camp for free. “But be careful, there is no one else out there,” she added. “What do you mean?” was our trepidatious reply. “Oh, nothing, I am sure you will be just fine.”

We followed her directions and were surprised to find a well-used site with a fire pit, bench, and distant long-drop toilet next to an empty ranger station. Success. While all the other camper tourists huddled together, breathing each other’s fumes while parked on an expensive slab of concrete, we were having a true adventure. With the roof tent open, and the kids scavenging firewood, we prepared for a night of grilled meat and a few cold beers. Just before dusk, a pickup truck with tinted windows drove rapidly towards us on the dirt road, stopping suddenly about a hundred feet away. The pickup remained stationary for a few minutes, the blackened windows staring at us, unblinking. 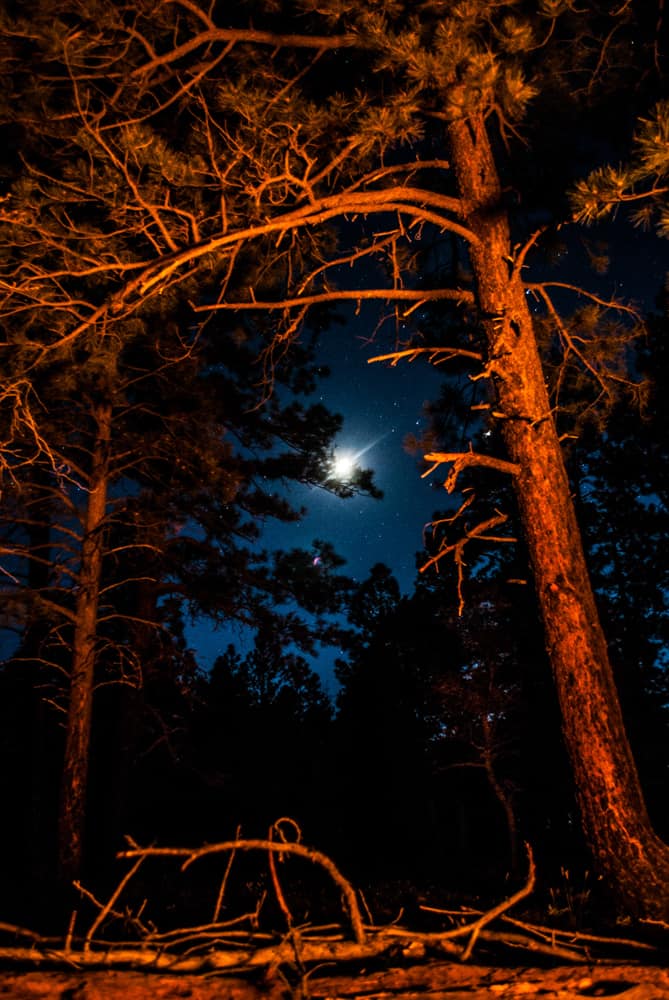 Suddenly, the vehicle accelerated and disappeared from view. The ranger whispered in my ear, “Be careful, there is no one else out there.” Ten minutes later the pickup returned and regarded us once more from another angle for an equally sinister period of time before racing off back the way it had originally come. Inner children stirred. “I am sure you will be just fine.”

No traffic passed us for the few hours it took for the sun to set, the fire to dwindle, and imagination to create monsters in the blackness. Sweeping the flashlight through the darkness only served to remind us how alone and exposed we were. I armed myself: machete, Leatherman, hunting knife, pepper spray, a stout piece of wood, Dutch courage. As the man of the tent it was my job to stay calm, remain rational, and defend. If I showed any fear, Luisa’s fear would run in circles screaming, stripped of all pretense and begging to get the hell out of there.

The dark closed in around us, menacing and thick. We chatted for a while, Luisa sporadically surveying the surrounding forest with the Maglite. “Did you see that? I saw eyes.” To acknowledge fear is to encourage it. “You are imagining things, love.” A patronising tone.

Were those eyes? Did she just see eyes? What would have eyes out here? Is this mad killer bear country? Do human eyes reflect torchlight? “Be cool, honey bunny, be cool.” Listening to Creedence did not do much to relax me. Neither did Bob Dylan, Bob Marley, a few more beers, or The Doors. We decided to go to bed. While climbing the ladders to the tent, a beast of the night ripped at my feet; I felt the missed strike brush my ankles. What was that? Luisa, her panic activated by my own, flew up the ladder and into the tent, since everyone knows the last one in is always eaten. The only sound was our nervous laughter. We lay there, protected by thick South African canvas and the gentle purr of brave, sleeping children, our eyes wide open. We were both 39 years old. 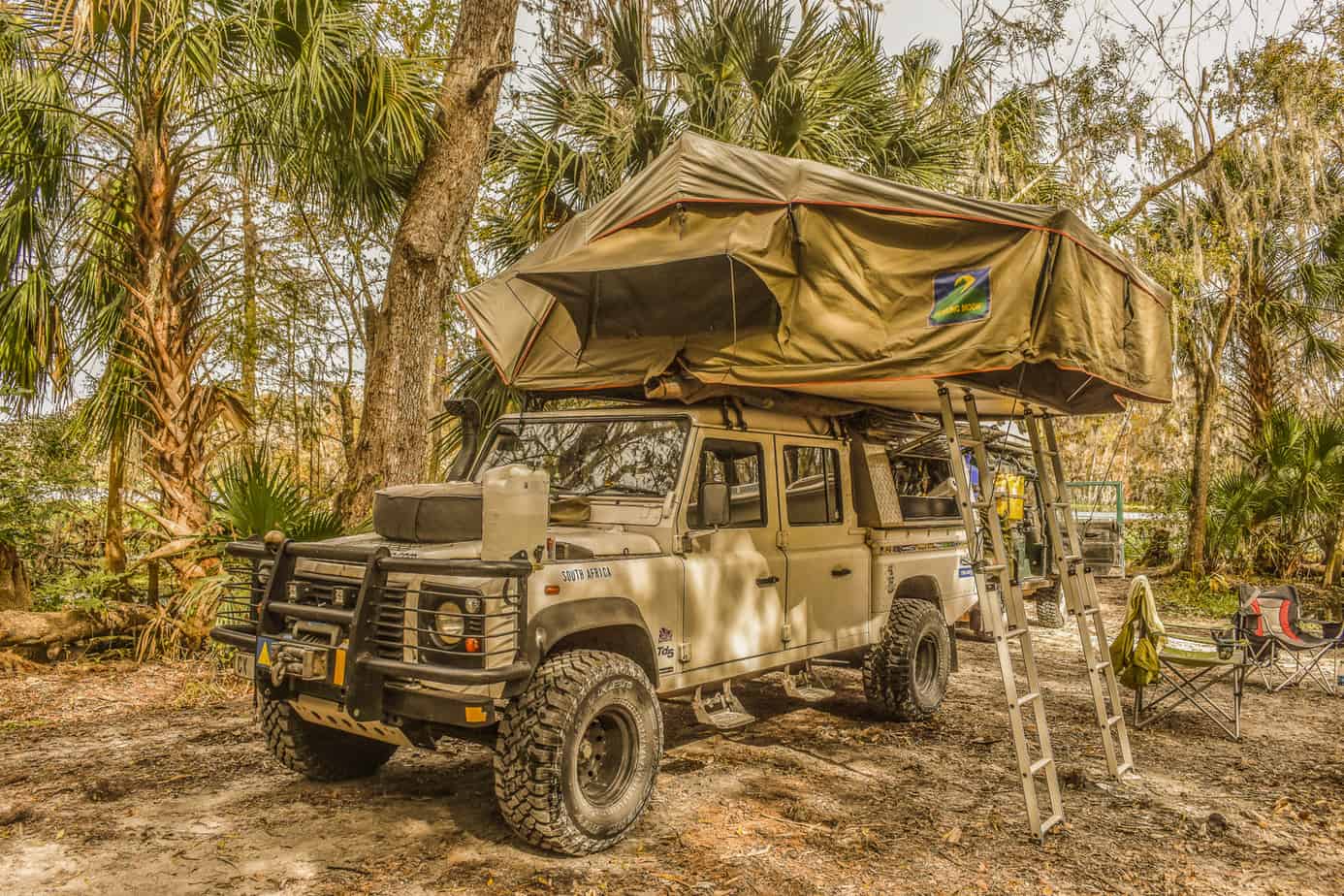 Nothing ripped at the tent, nothing prowled outside except our persistent imagination. Eventually, I gave in to sleep, safe in the knowledge that Luisa would probably not sleep at all, her rampaging paranoia ever vigilant, her pricked ears analyzing every breath of the wind, every rustle of leaves.

In the middle of the night the beers awoke me, asking to be let out. My stirring woke Luisa, whose tale of exhaustion reminded me to be fearful. Did I really need to dress, climb down the ladder, find a pair of shoes, and walk out into the dark and find a respectful distance from the Defender? Yes, I did. I began to relieve myself. Behind a tree, to my right, the disfigured, deranged mutilator from The Burning stood watching, blood-caked, razor-sharp garden shears in hand. This was the moment he had been waiting for. He would be standing directly behind me as I turned, would lunge at me from the darkness with superhuman strength and the stench of death. Surely I would fight him, defend my family and my life, pee on my feet.

That morning I awoke feeling drowsy, relieved, and foolish. I stoked the coals and prepared our family breakfast while berating myself. The daylight had restored my courage and I realised that I had not been nearly as scared as Luisa. If anything, I was merely tapping into her fear, and my concern was simply a reaction to her terror.

Yes, that’s exactly what happened. What a silly girl you are Luisa.

The sinister pickup returned just after we finished breakfast and my heart skipped a beat. Fight or flight? Do we throw the tent up, jump in the Landy, and head for the safety of the canyon’s ring road? Five excited, smiling young men emerged from the pickup. “Hey, is that a Defender? Where the heck are you guys from? What, you travelled around South America and then all the way up here? Man, you guys are really brave.”

We’d also highly recommend checking out their book trilogy. Each is packed with edge of your seat adventure, hilarious anecdotes, and helpful information for adventurers of every nature. You can find the soft cover, hard cover, and ebook bundles on their website store here. We hope you enjoy them as much as we did!