We made it to Abu Hamed at the end of the day where we managed to find fuel and water. The railway line route through the desert remains the only way to travel onwards to Karima: our next port of call. Looking forward to a second day on the sand, we noticed an ominous dripping from the undercarriage. Upon closer inspection, it appeared to be diesel but we couldn’t work out where it was coming from. Obviously at this point we roped in our much wiser companion and together we deduced that in all the mayhem of the desert, one of the great bumps or jolts had sent the cap on a jerry can flying off, leading to diesel spilling in the pickup flatbed and draining through small holes in the vehicle’s belly. On the one hand, this was a relief as it meant the fuel lines were intact and we had no mechanical trouble; on the other, it meant our sleeping bags no longer smelled of sweat but of diesel and our provisions would never taste the same again. We also discovered that in the chaos, one of our shock absorbers had jumped out of its cradle and the bolt had snapped off. Richard and Byron headed off into town to try to find a mechanic, which was a challenge during early evening – breakfast time during Ramadan. Nevertheless, they appeared a short while later with a local, hitching a ride on the bonnet, who had a quick inspection before deciding he either couldn’t do anything, or didn’t want to do anything. Our options were thin on the ground, so we got back on route and limped to a secluded patch of rocky desert to set up camp for the night. 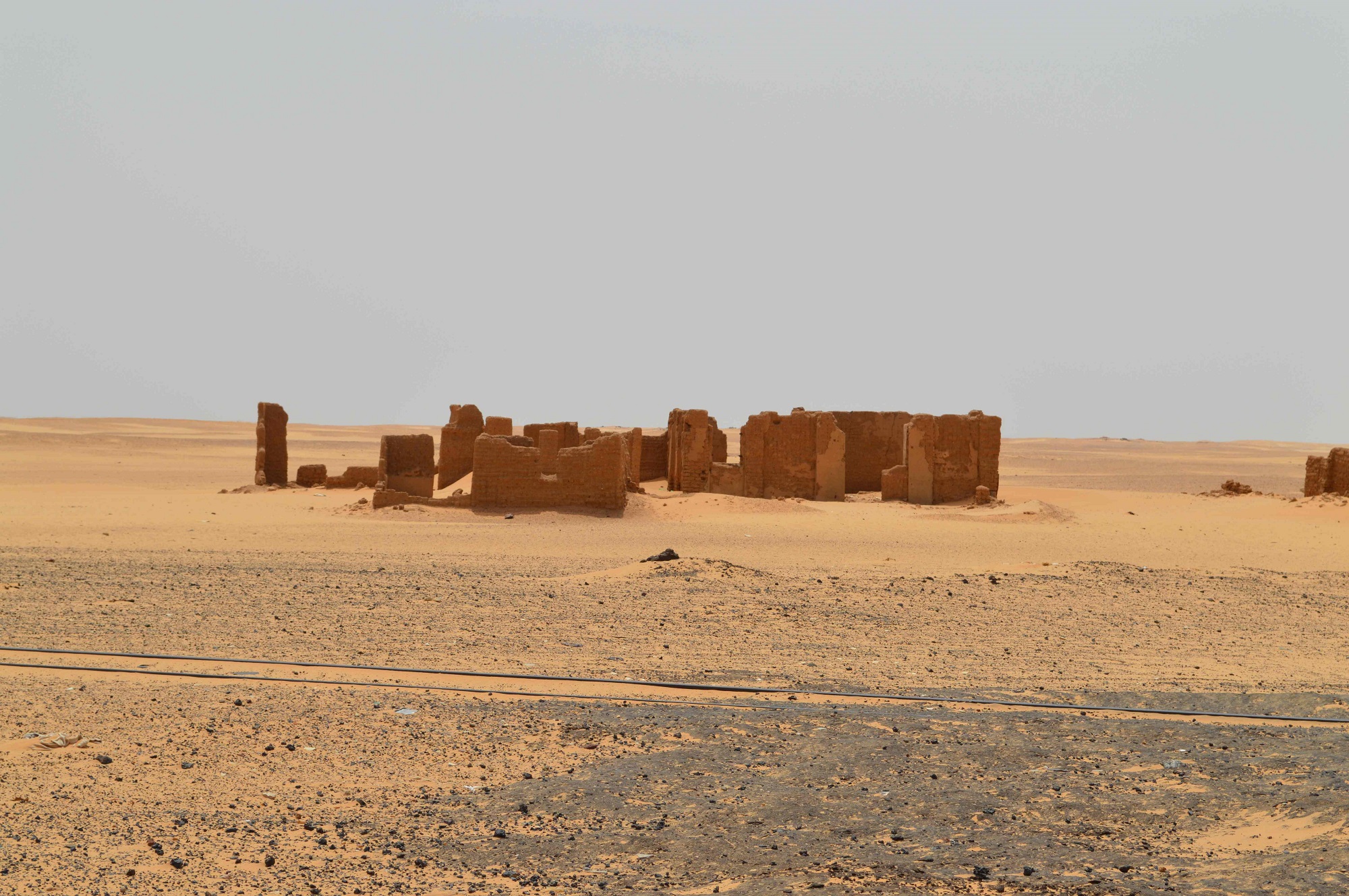 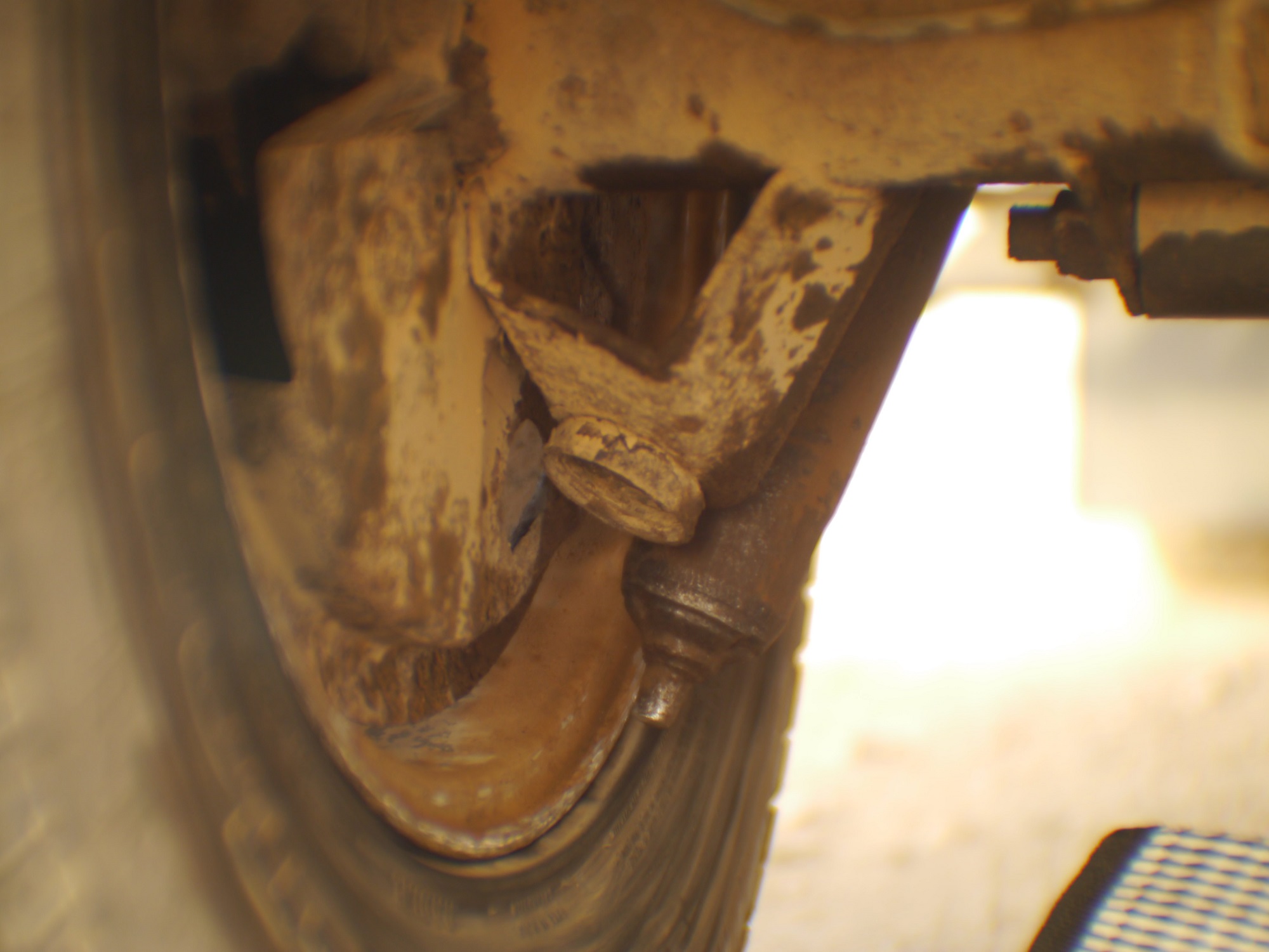 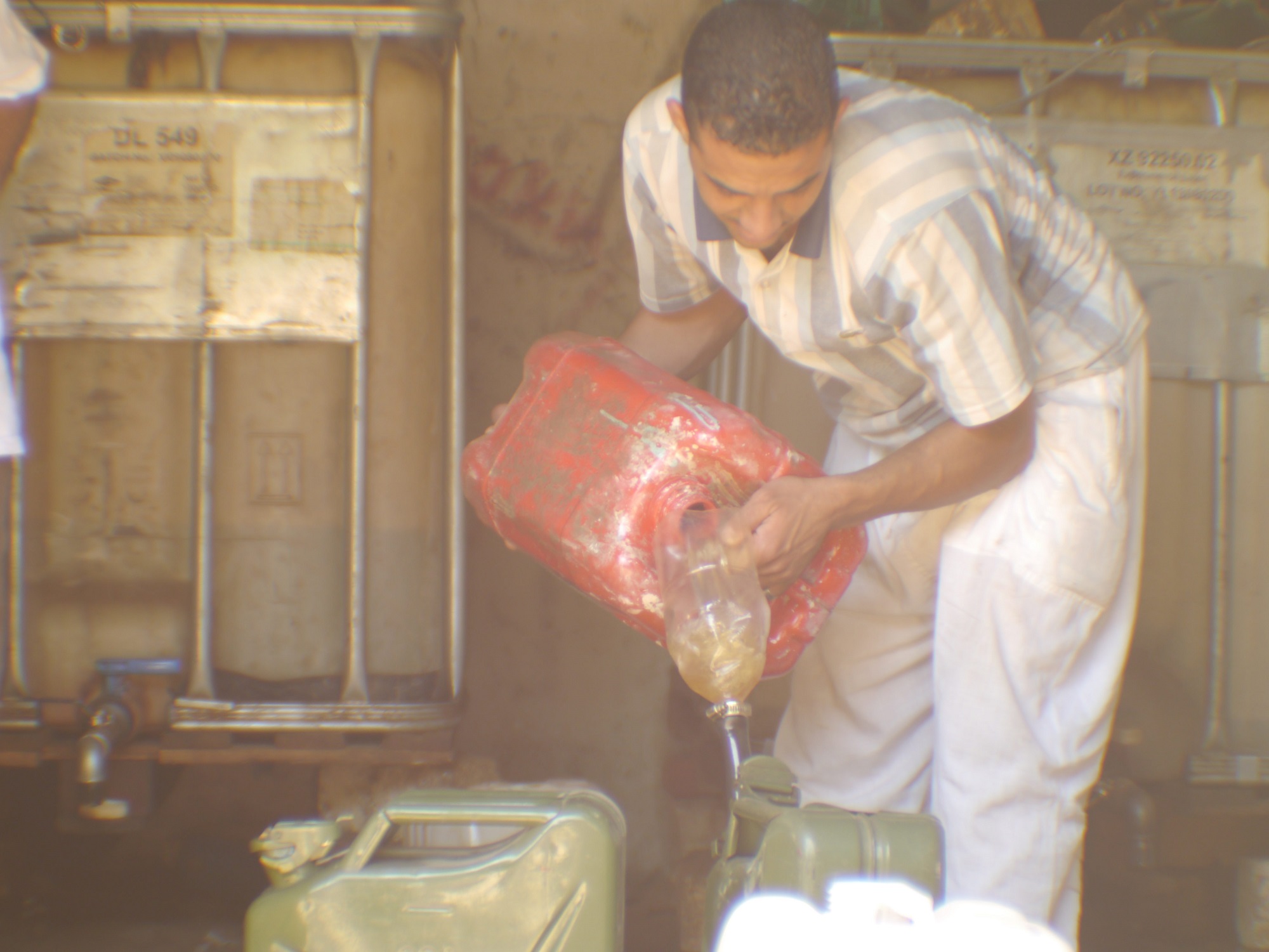 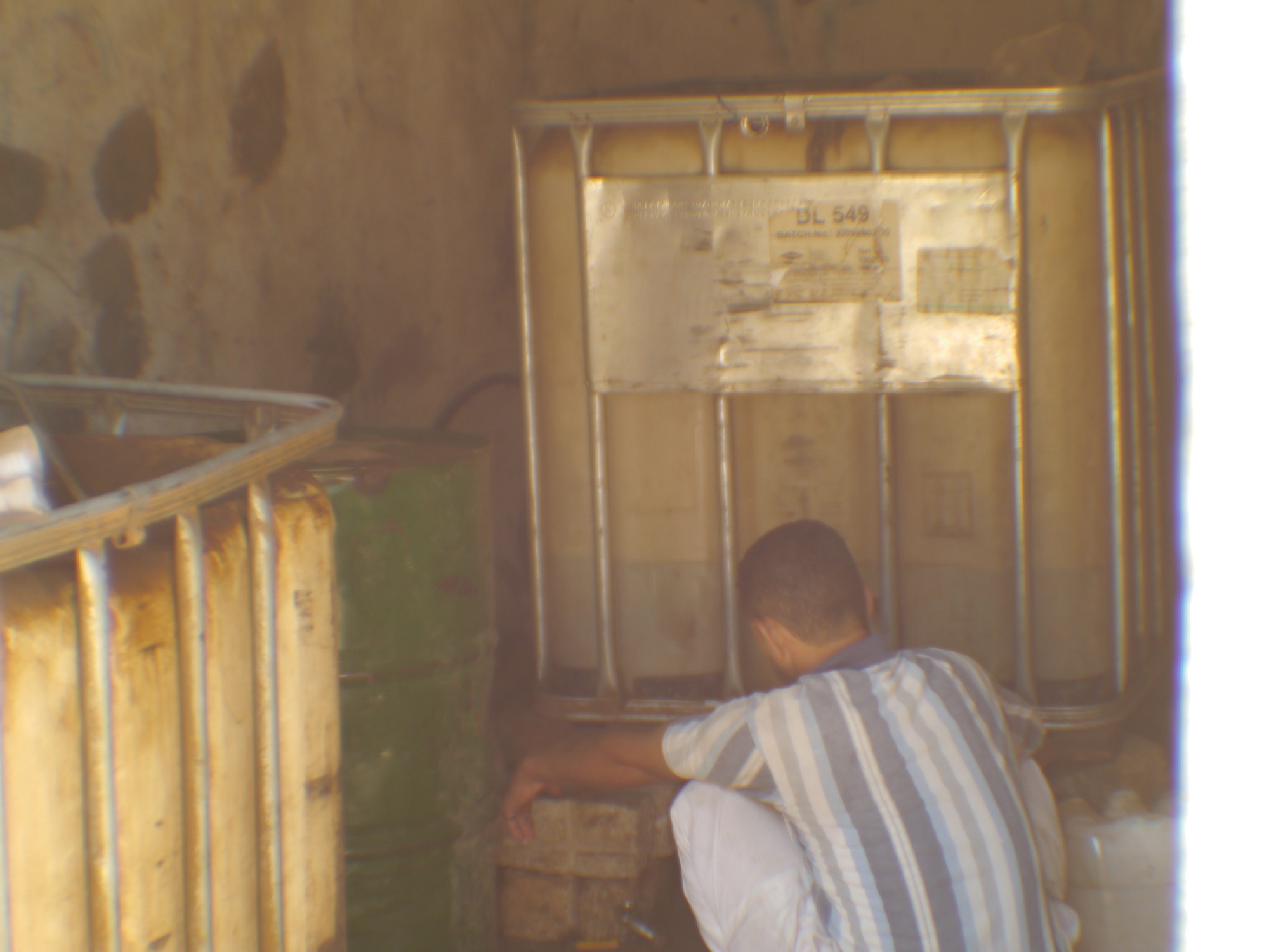 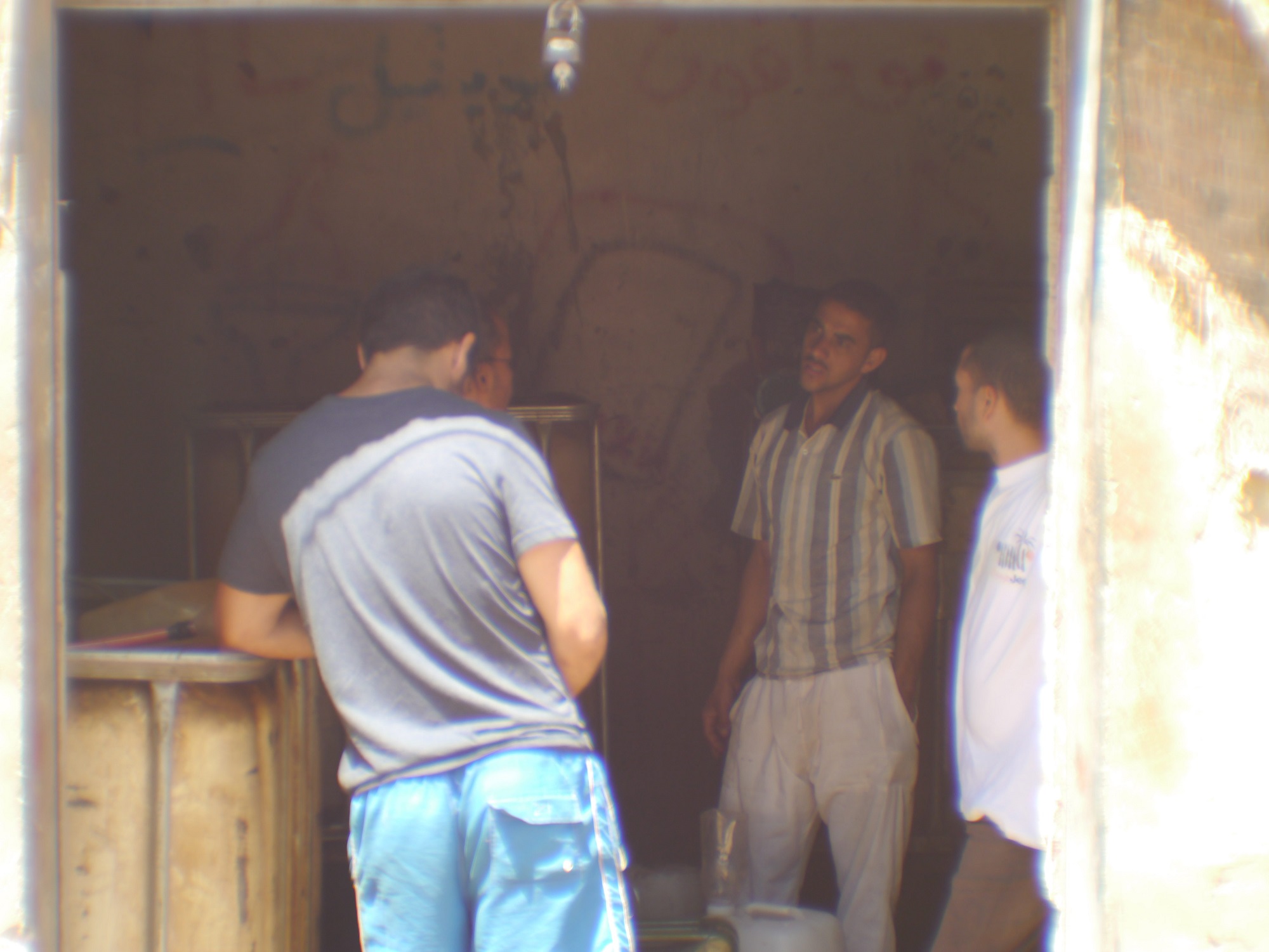 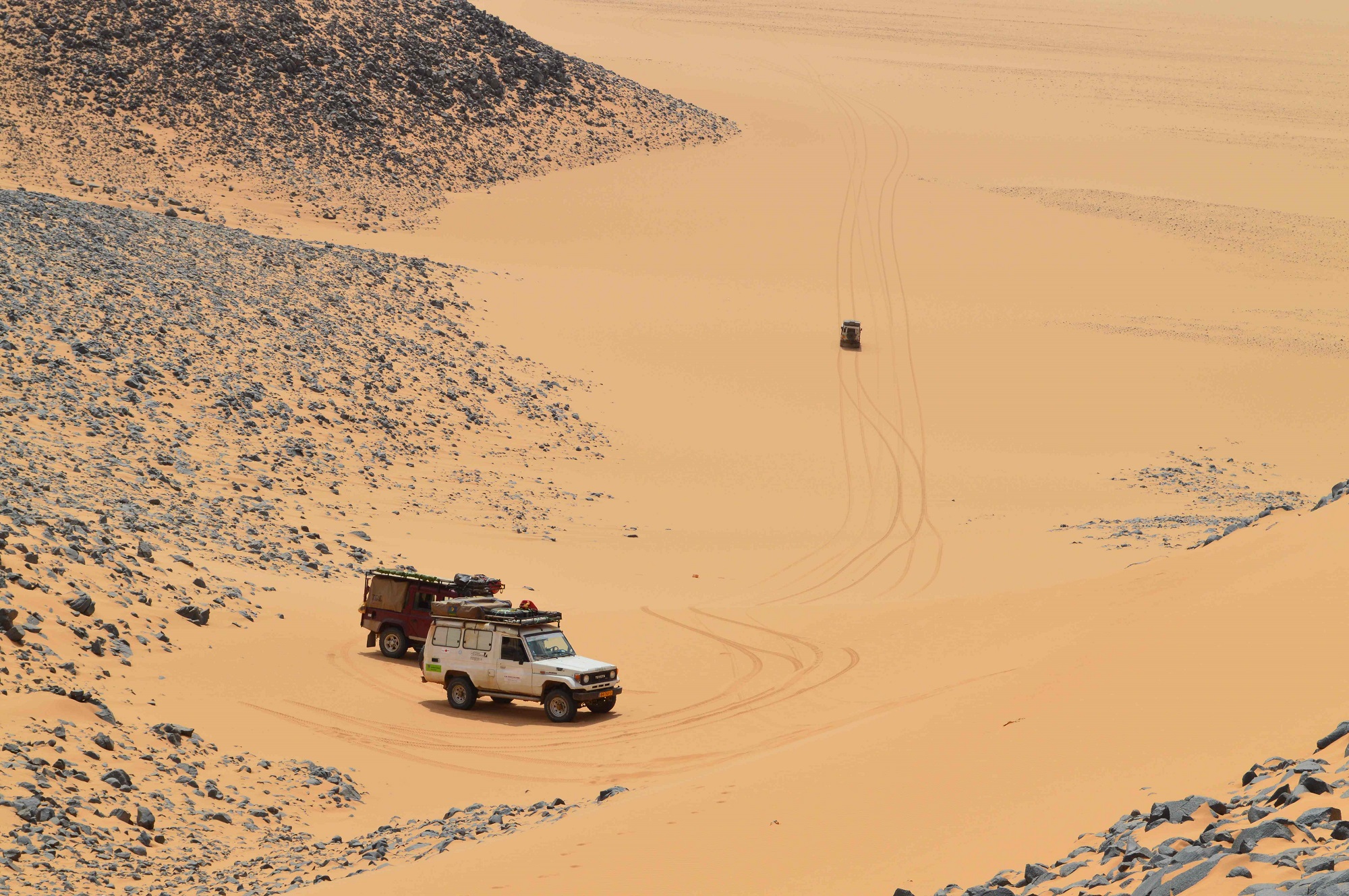 After darkness fell and our new recipe of diesel-tuna-pasta had been miserably concocted, initial repairs were attempted by lamp light. It was an impressive method, new to all of us. The problem was that there were no threads left on the bottom of the shock absorber to attach a nut to and fix it in place, so Byron essentially attempted to create entirely new threads on the stub. The process involved filing down the stub of the shock, taking a stainless steel nut (a harder metal than the stub) and slowly and simultaneously bashing the nut onto the stub whilst rotating it so that the threads on the inside of the nut would be engraved onto the stub. It was the best of a bad situation and unfortunately didn’t hold long. It was a valiant effort though and something we would never have tried on our own. With a bush repair now out of the question we decided we would wake early and set off before the others in an effort to make it to Karima at a slow and steady pace to find a mechanic able to make the repair before nightfall the following day. 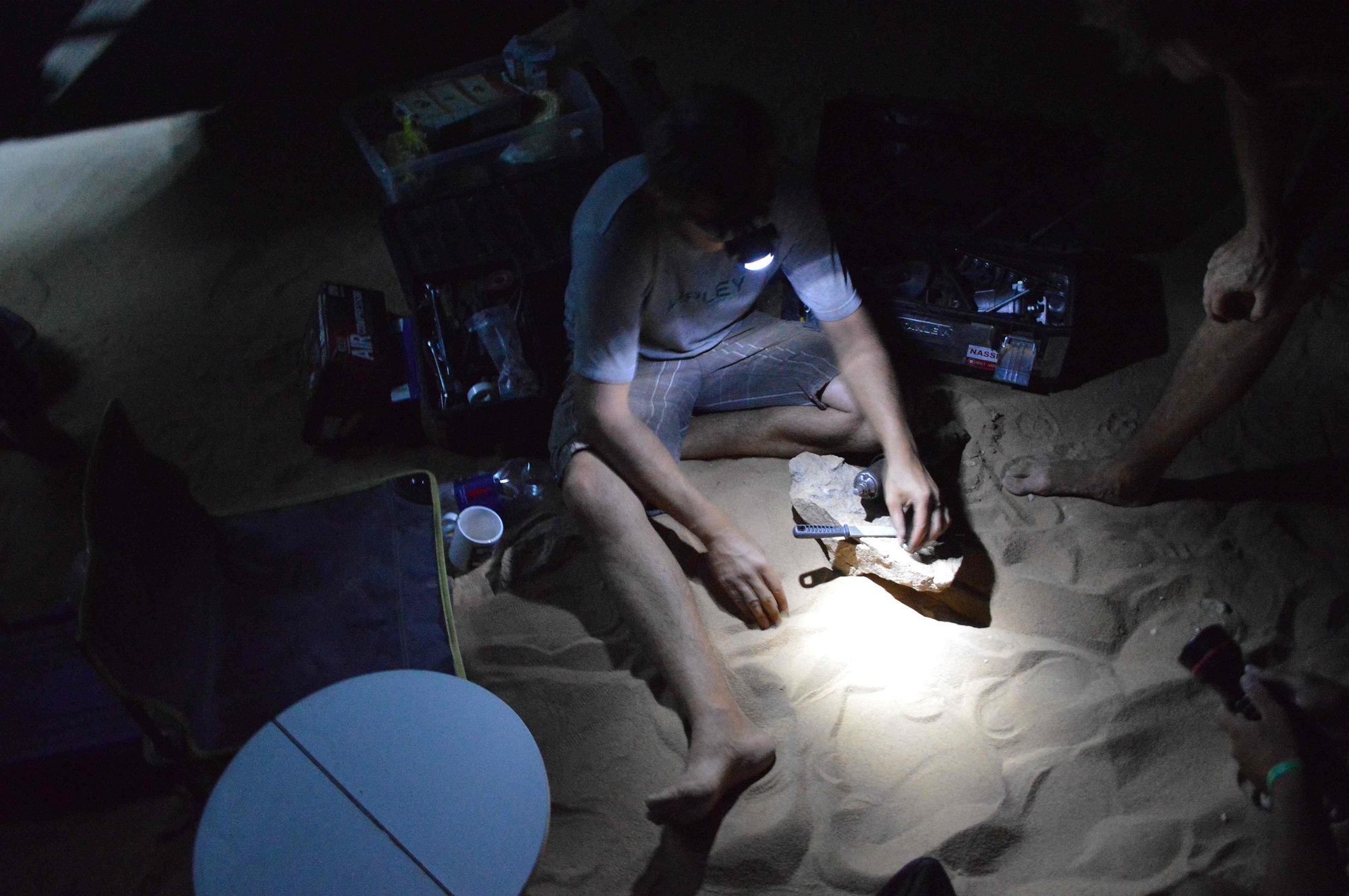 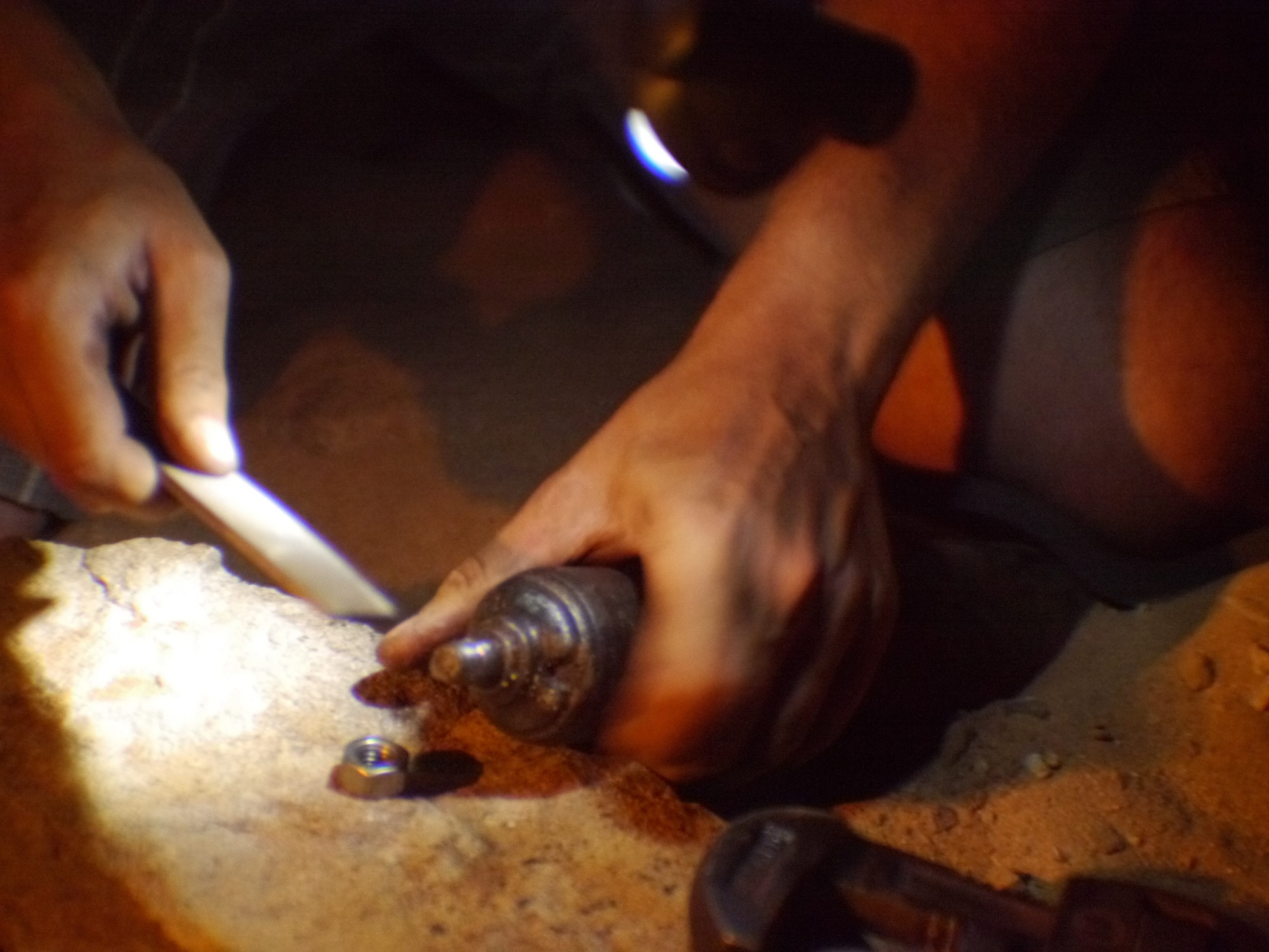 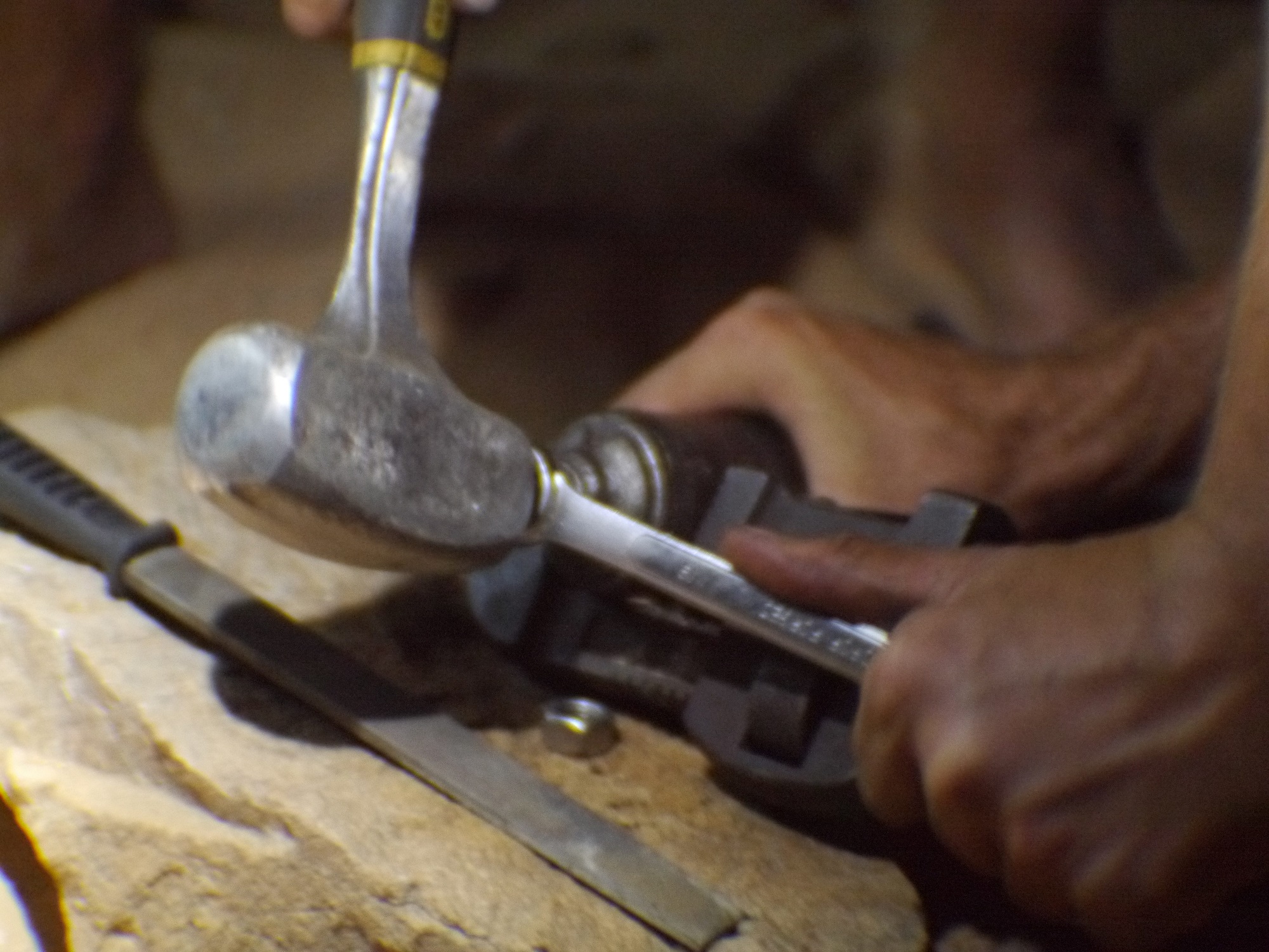 Back on the hot sand in the morning we encountered mostly firm, open landscape with stretches of washboard. As the day progressed we found ourselves on a smooth track which we believe had been created to serve a nearby quarry at some point in time. We rolled along at a steady thirty miles an hour, finding the day really rather pleasant. As everybody knows, these things rarely last and it wasn’t long before the way became less clear – we had become so caught up that we had lost sight of the railway. Eventually we were just trying to pick the best route from one dune to the next, sticking as much as possible to the rock-littered sand which offered the best traction. More and more frequently we were getting stuck and having to use low ratio to get ourselves out. When we finally found the track we mounted it, the reprieve offered by this was only fleeting as the sand on either side of the runners soon became so deep that we risked beaching the car on the line. Too late to correct our mistake, we had followed the railway into the bottom of a small valley, where all the soft sand collected. We were trapped like a spider in a sink, unable to climb out. In the mid-day heat we took out the shovels and began to dig. 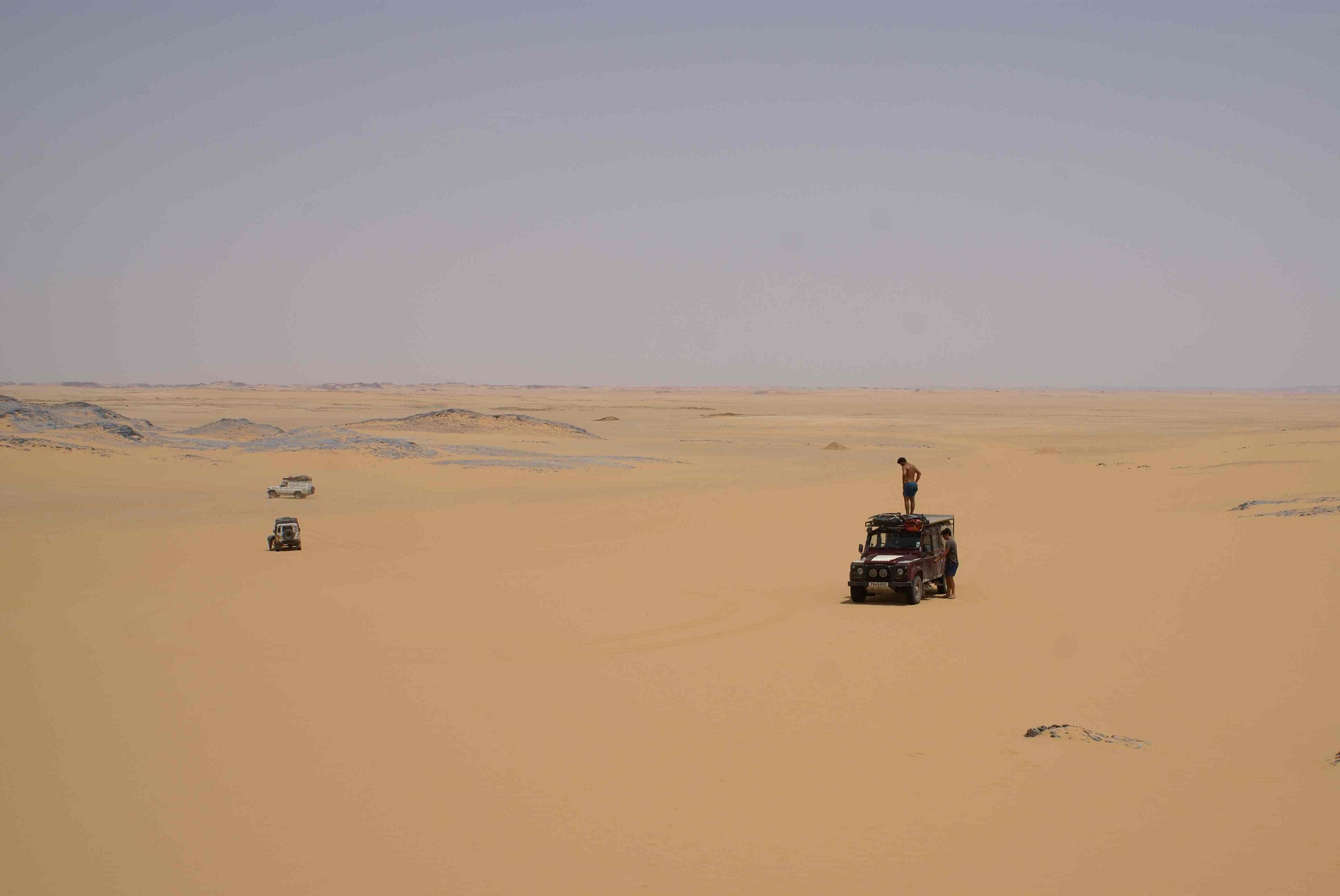 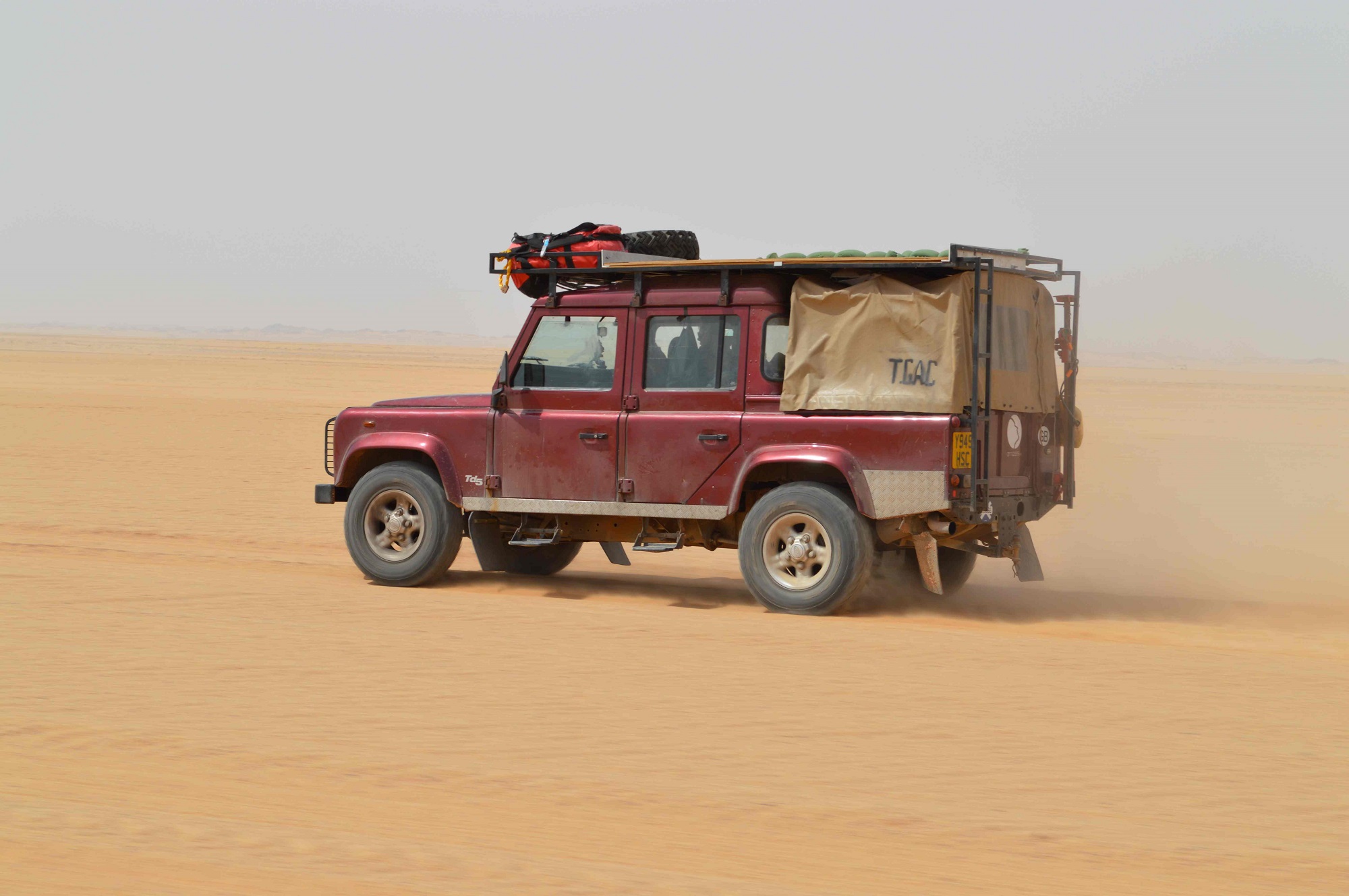 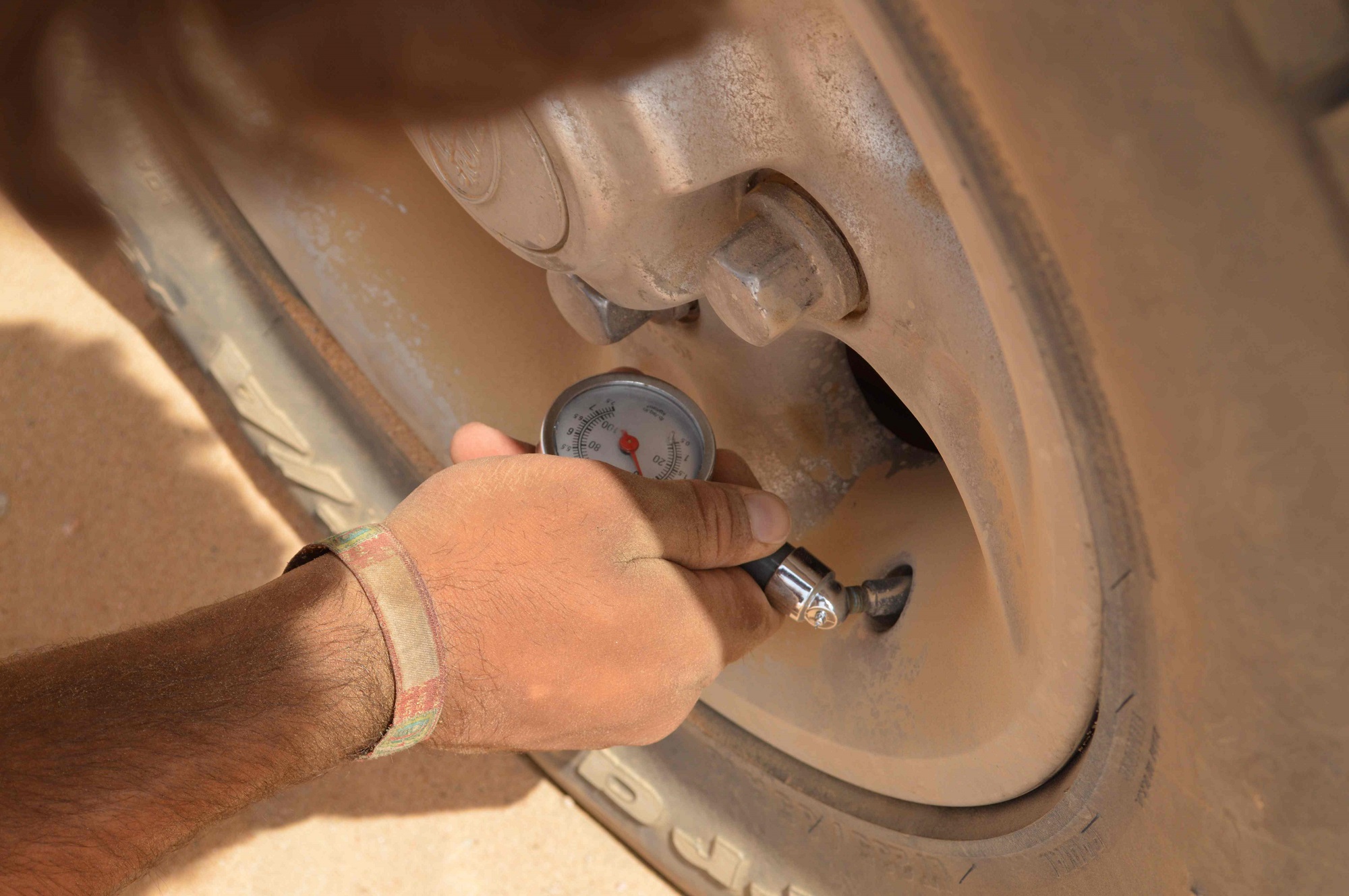 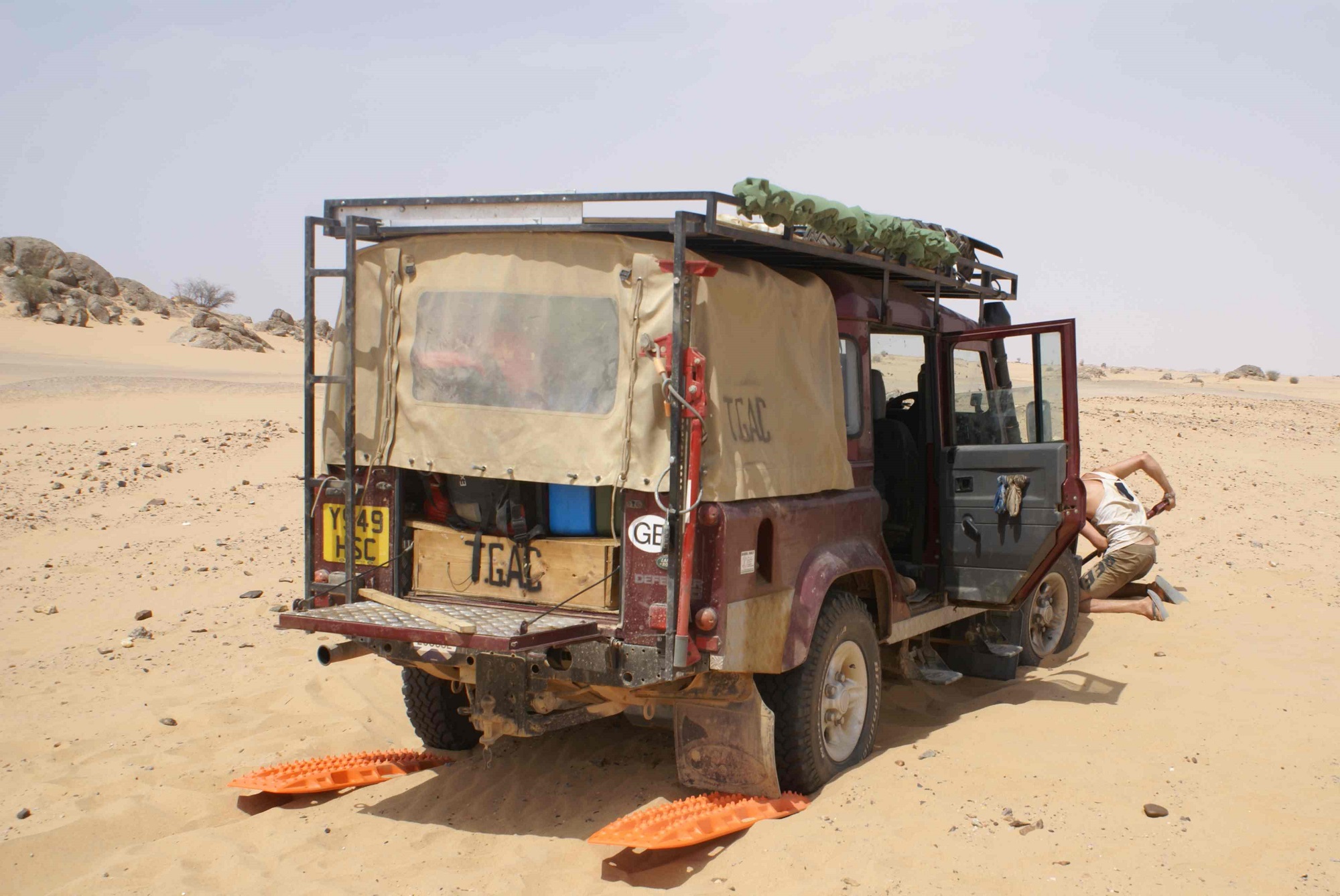 Sweat running down our sand caked faces, our thermostat topped out at 140°F, temperatures that none of us had borne witnesses to before. We toiled away, the sun glared down on our backs, the sweat ran into our eyes stinging them and the scorching sand swallowed our feet burning them raw. Digging away, we noticed the other vehicles in our convoy driving past in the distance. Frantically honking the horn and trying to get their attention proved useless and we felt even more beleaguered as they disappeared in a hazy mirage. Never mind, we had been looking for an excuse to use our sand ladders for a while anyway so, covered in sand and sweat, we pushed, dug and laddered her free. Our effort was aided by the appearance of a local man who must have heard our blaring horn and came to investigate. He appeared over a dune walking toward us and without a second thought dropped to his knees and using his bare hands began drawing sand out from under the wheels. His once white robes now brown, the result of a tough life in the desert. Unable to communicate in anything other than joyous expressions and hand gestures we thanked the good Samaritan and re-joined the quarry road but were close to defeat from exhaustion and heat, having lasted the day on just one mango between the three of us – we needed to reach our destination urgently. 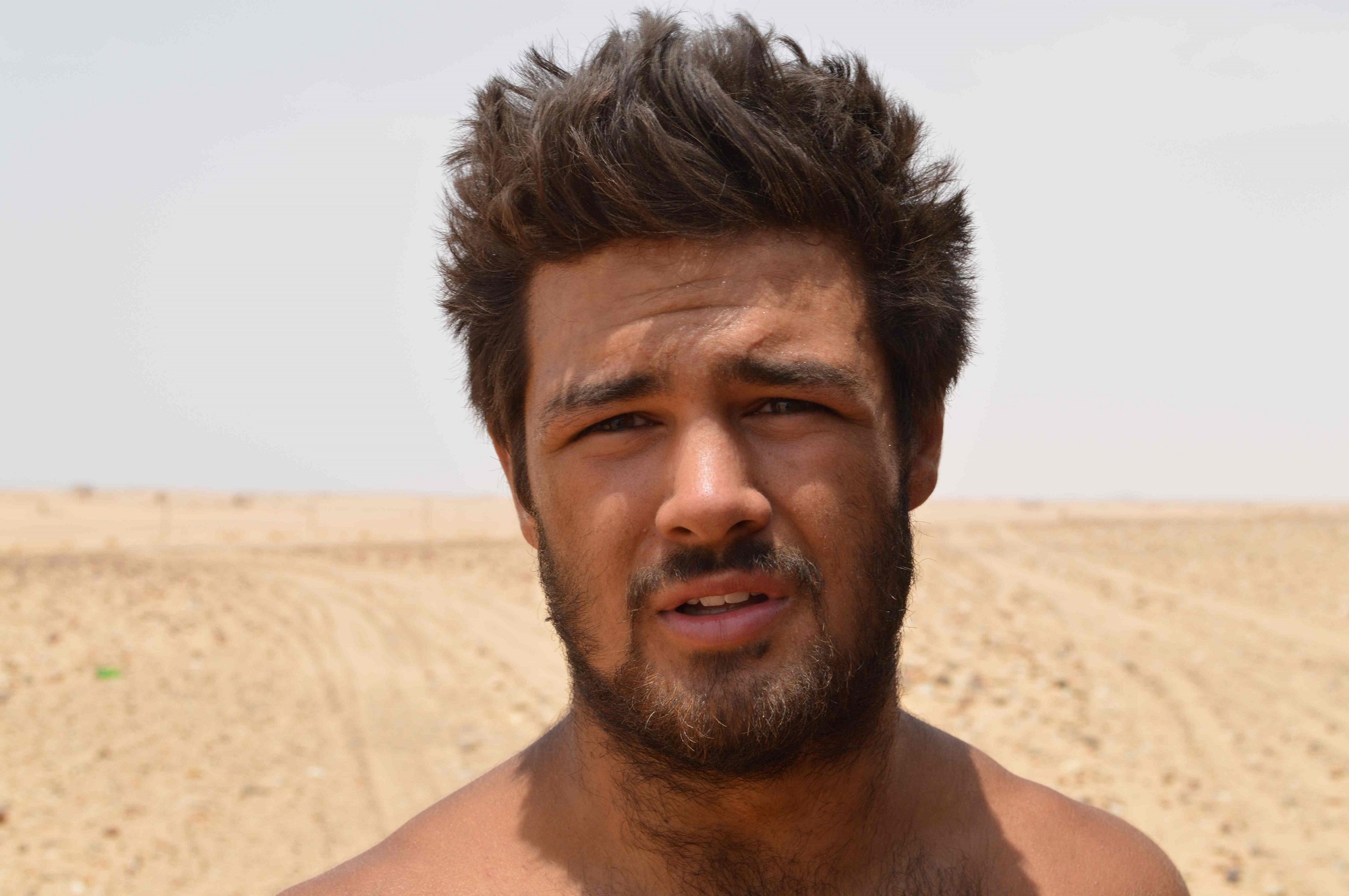 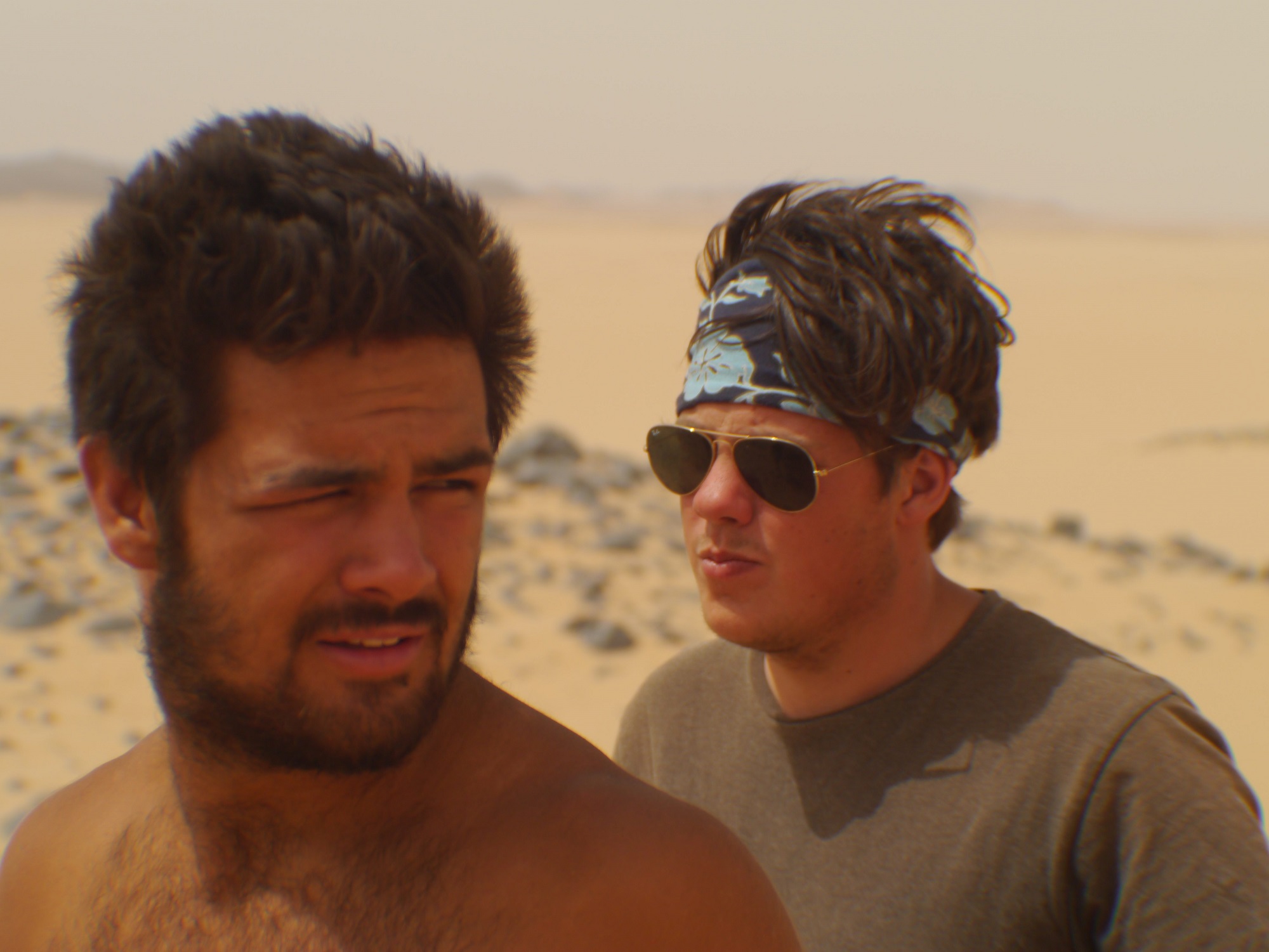 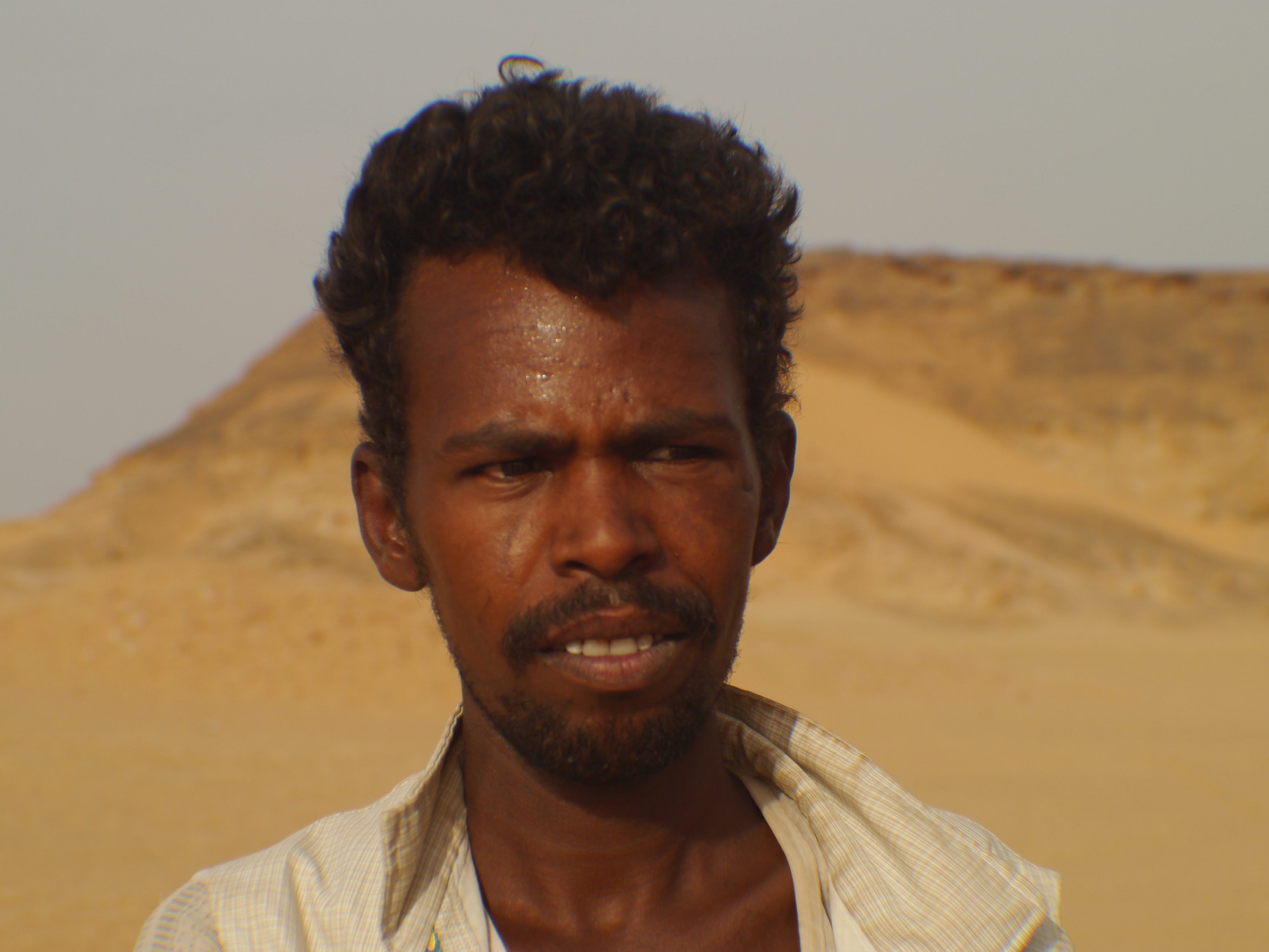 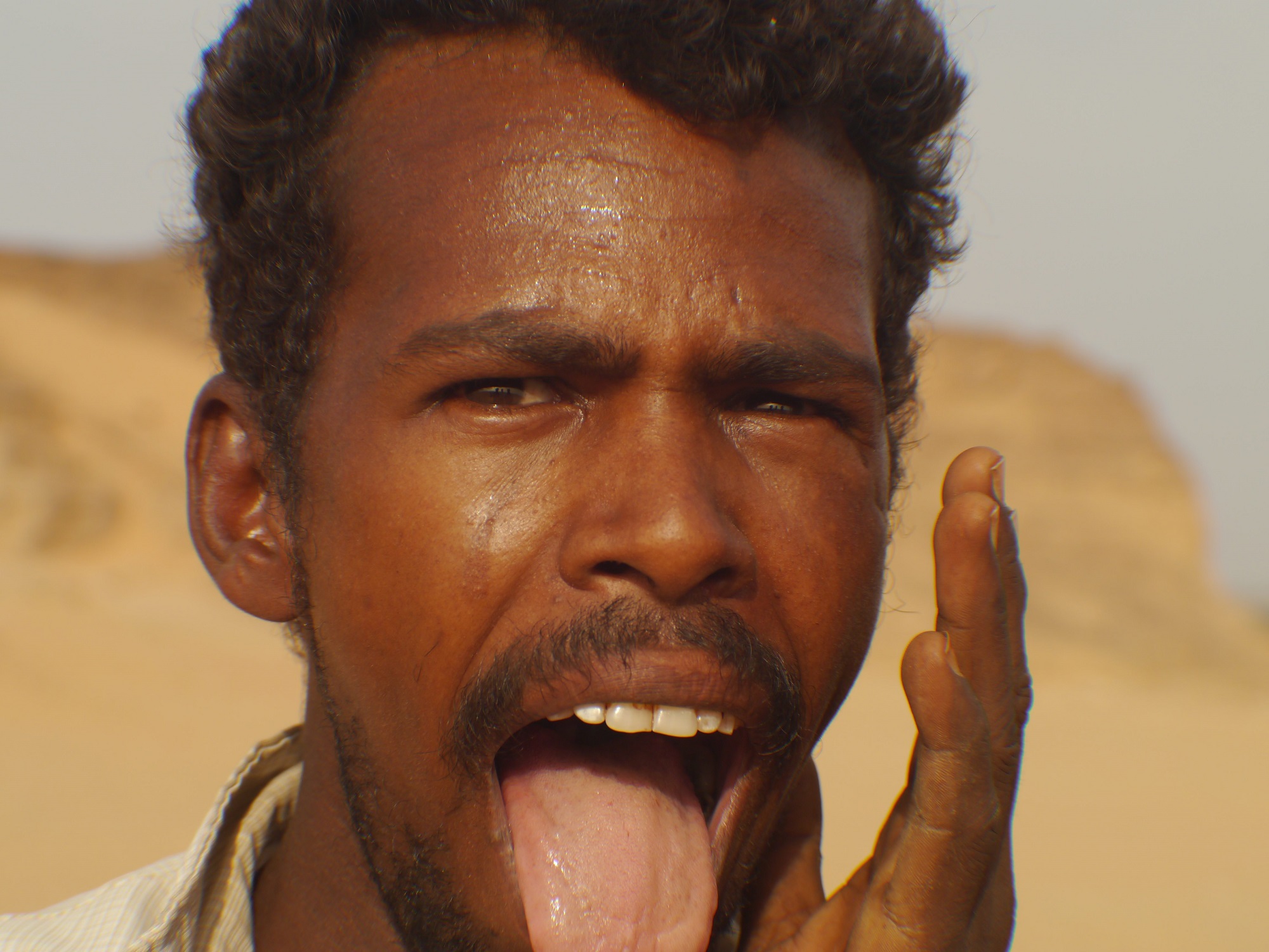 We drove for what felt like an eternity through the desert which had opened up once again. For the rest of the afternoon we saw only two camels and a pickup truck containing around eight men and a couple of AK-47s. Arriving in Karima while it was still daylight we were greeted with the magnificent sight of the world’s oldest pyramids standing solemn in the desert. A far cry from those at Giza that Westerners are most familiar with; there were no gates, no security, no crowds, no merchants or Coca-Cola vendors. We parked at the foot of one of these Nubian temples, ransacked by our ancestors’ centuries before in search of treasure and trinkets, only a few are still intact. Their tall, thin, four sided statures rise dramatically out of the sand and are interrupted only by the missing point at the top of each monument, having been savagely blown open by those early visitors. We wandered at will, taking photographs and exploring what must be one of the most unspoiled manmade wonders on the planet today. 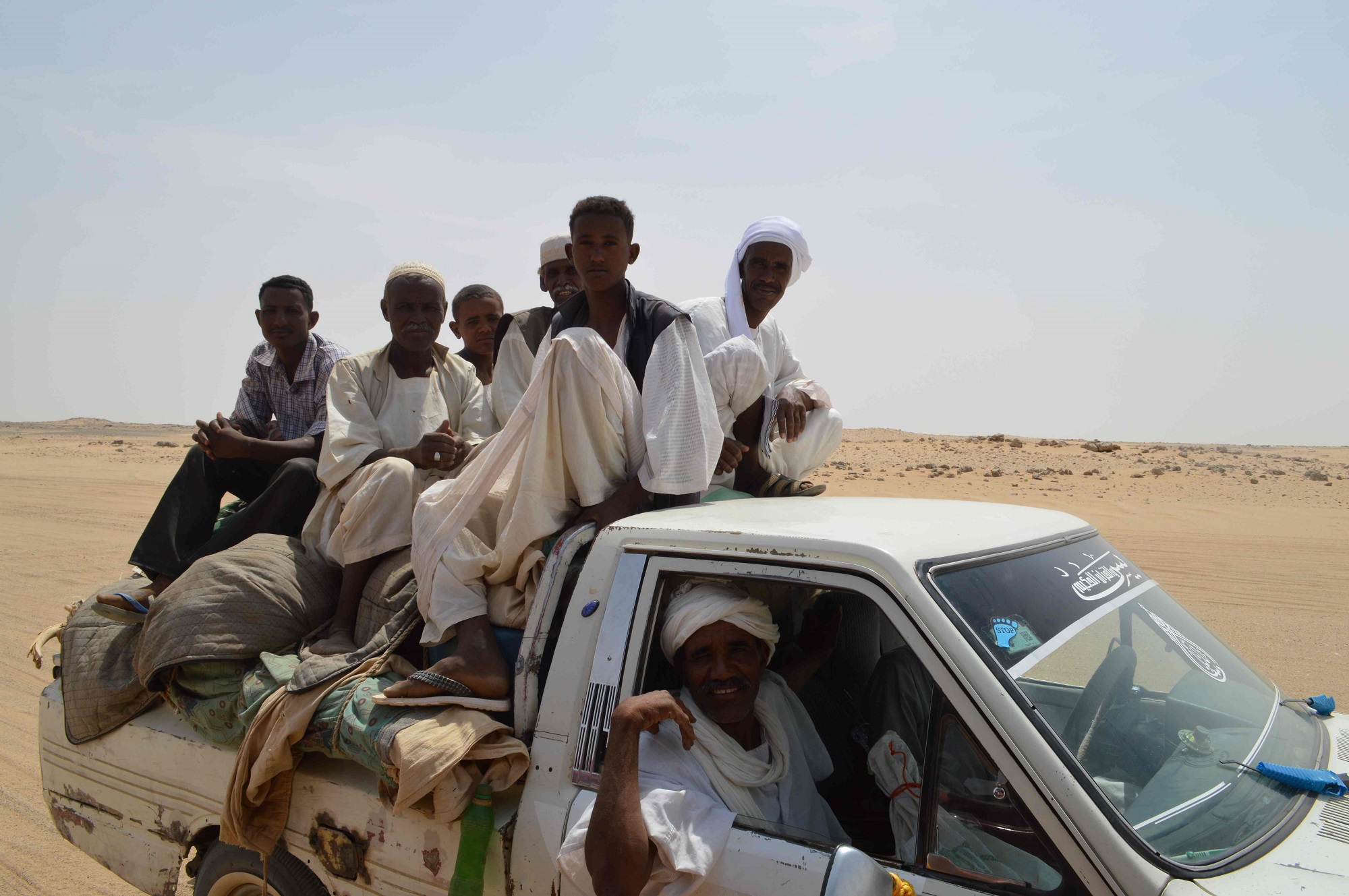 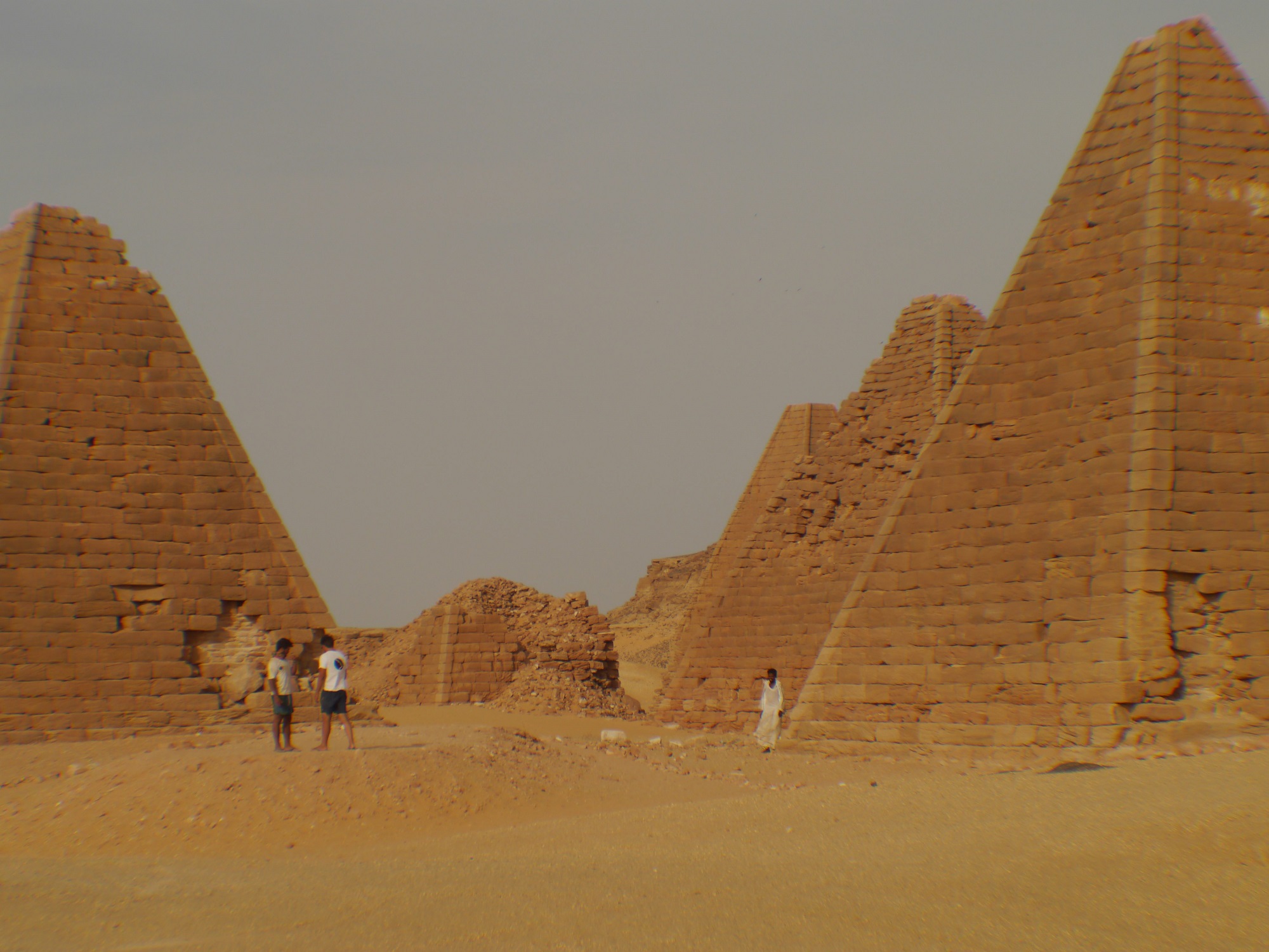 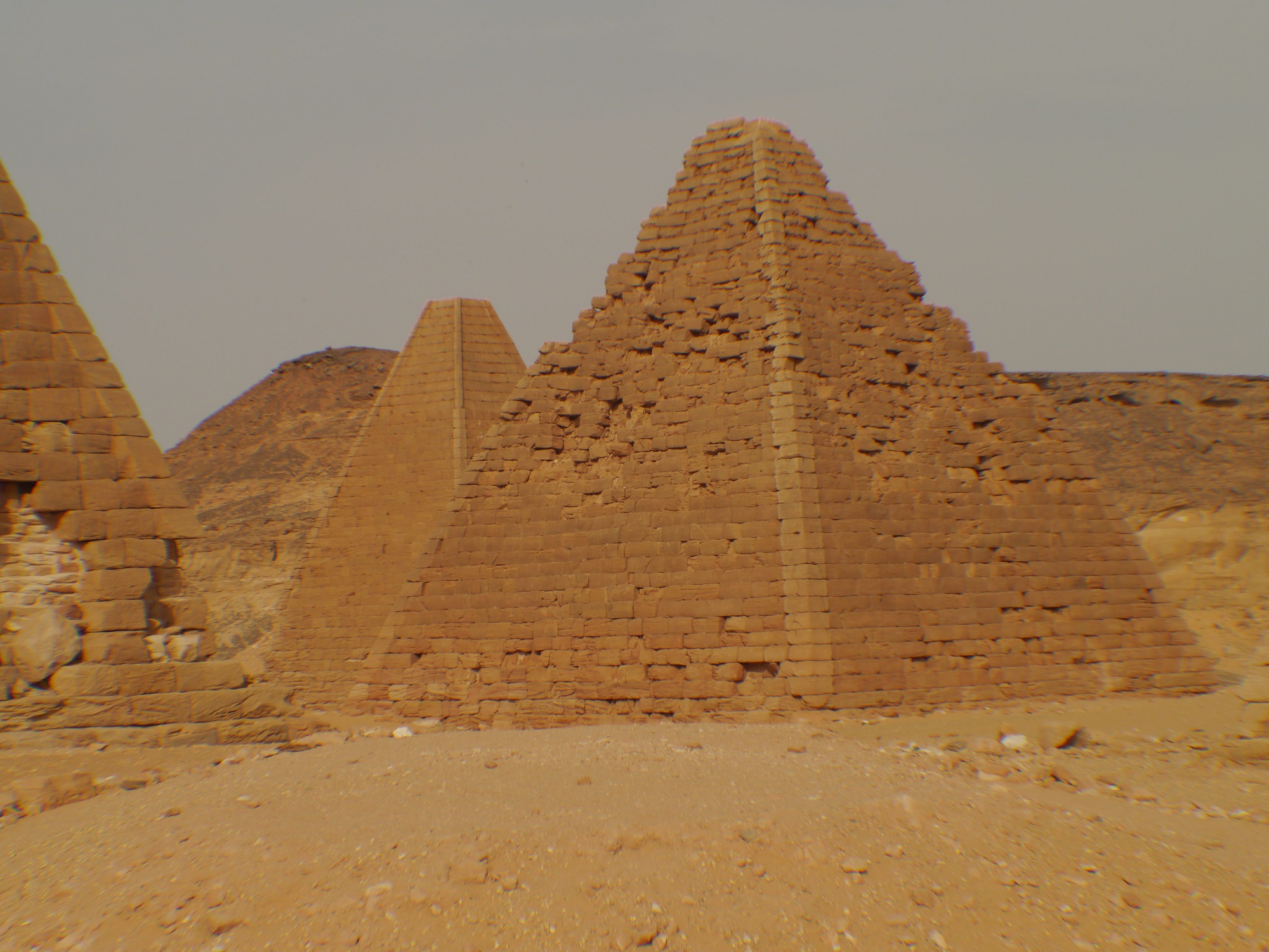 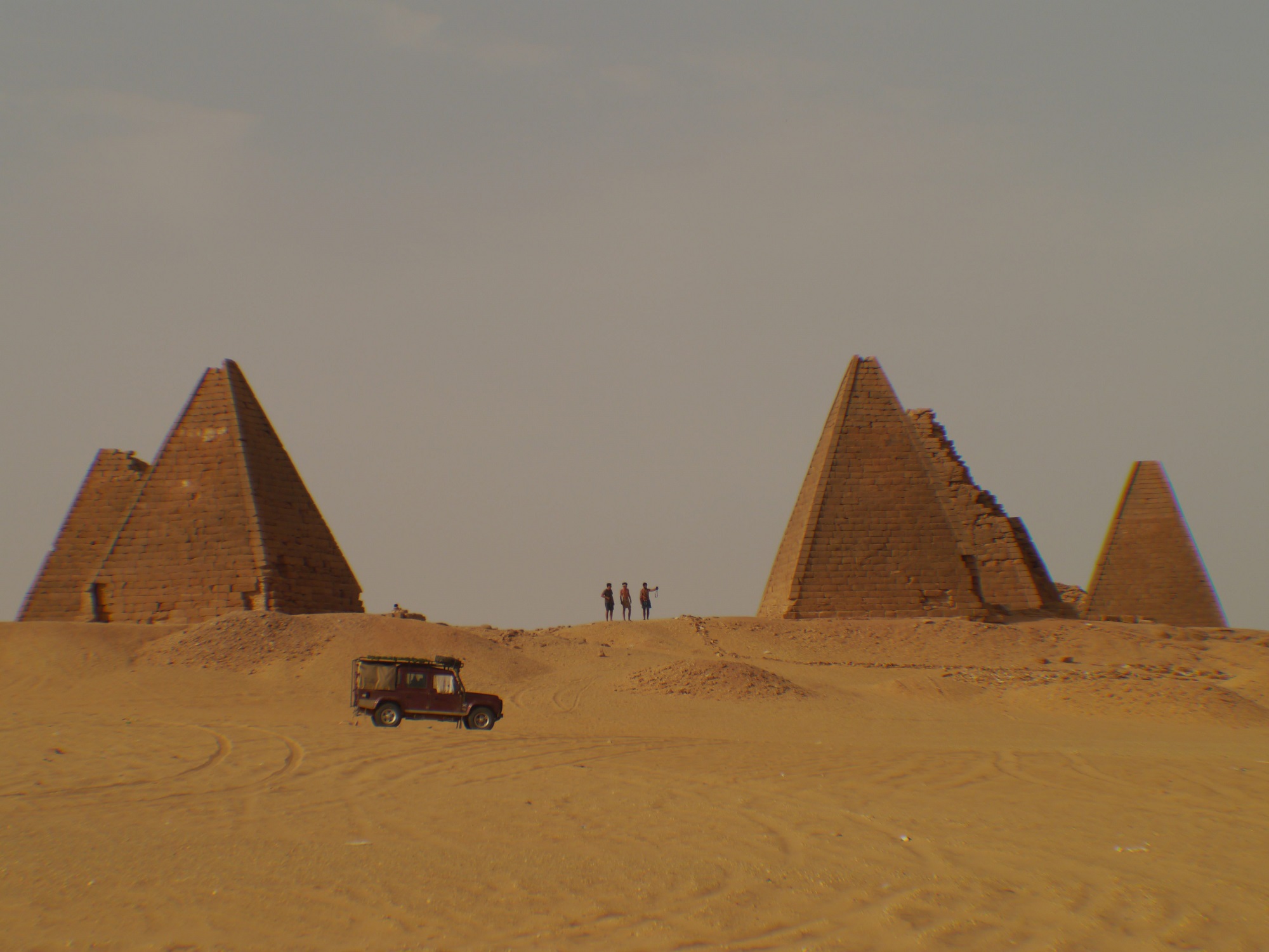 This journey from Wadi Halfa to Abu Hamed and then on to Karima was a strenuous experience for man and machine. It was some of the most intense driving we would undertake on our expedition. We did later find a replacement shock absorber in Khartoum, only to break it again a few days later in the Ethiopian Highlands and become haunted by cheap and flimsy replacements throughout the continent. We found North Sudan to be a remarkable country full of lively and hospitable people, many of whom unsure of how to treat the rare foreign tourist they encounter. 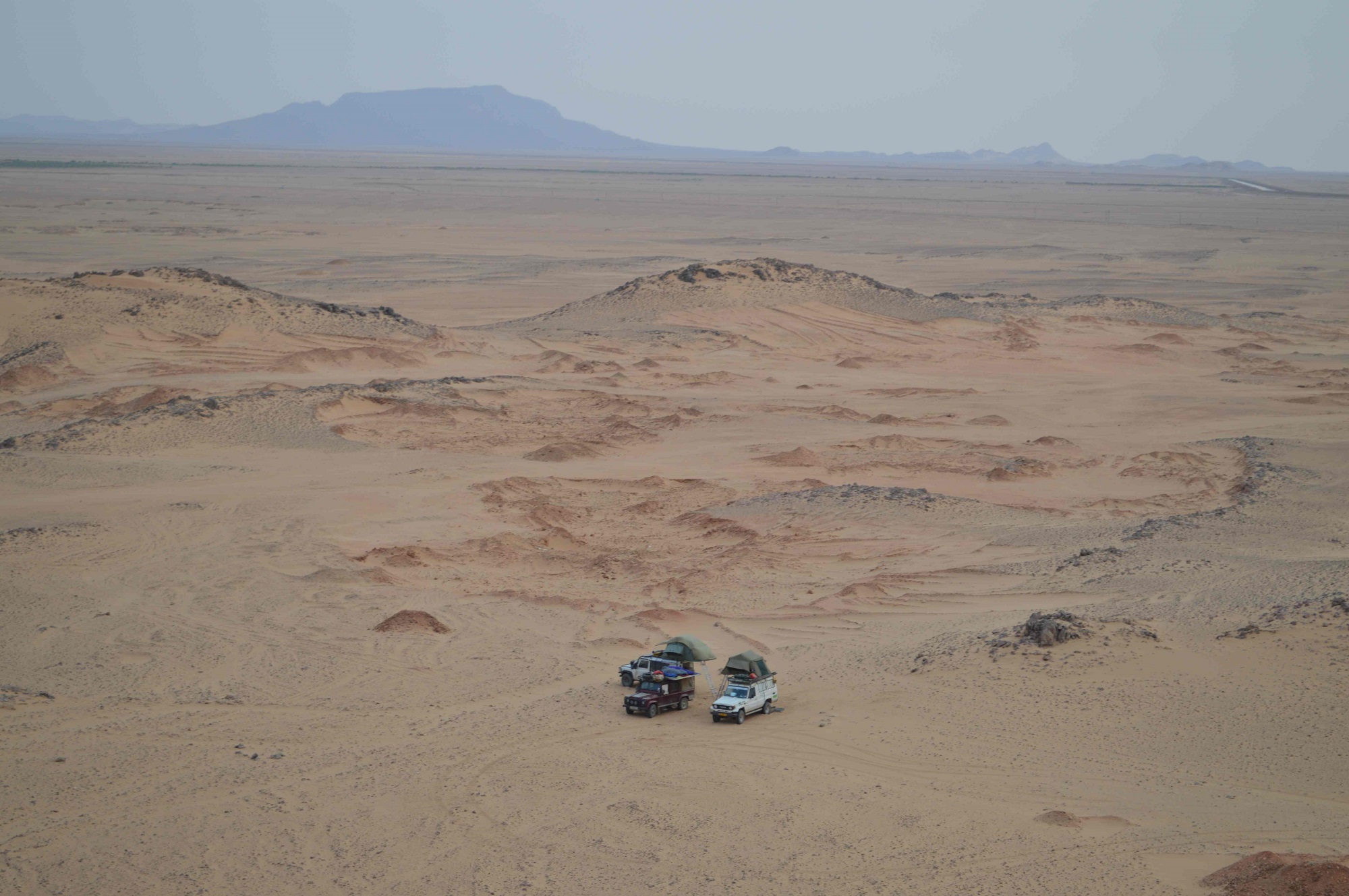 Our experience of this country was shaped by the desert, as our experience of Ethiopia would be by luscious greenery and Kenya by its rolling planes and magnificent wildlife. To us, this is what makes the African continent so unique; the diversity of landscapes in the world’s last great wilderness, the home of exploration. Despite our lack of technical knowledge and our tight budget, we arrived in Cape Town three months after departing from Scotland, vowing this was to be the first in a series of grand old tales to be told for many years to come. Tales of The Gentlemen’s Adventure Club. 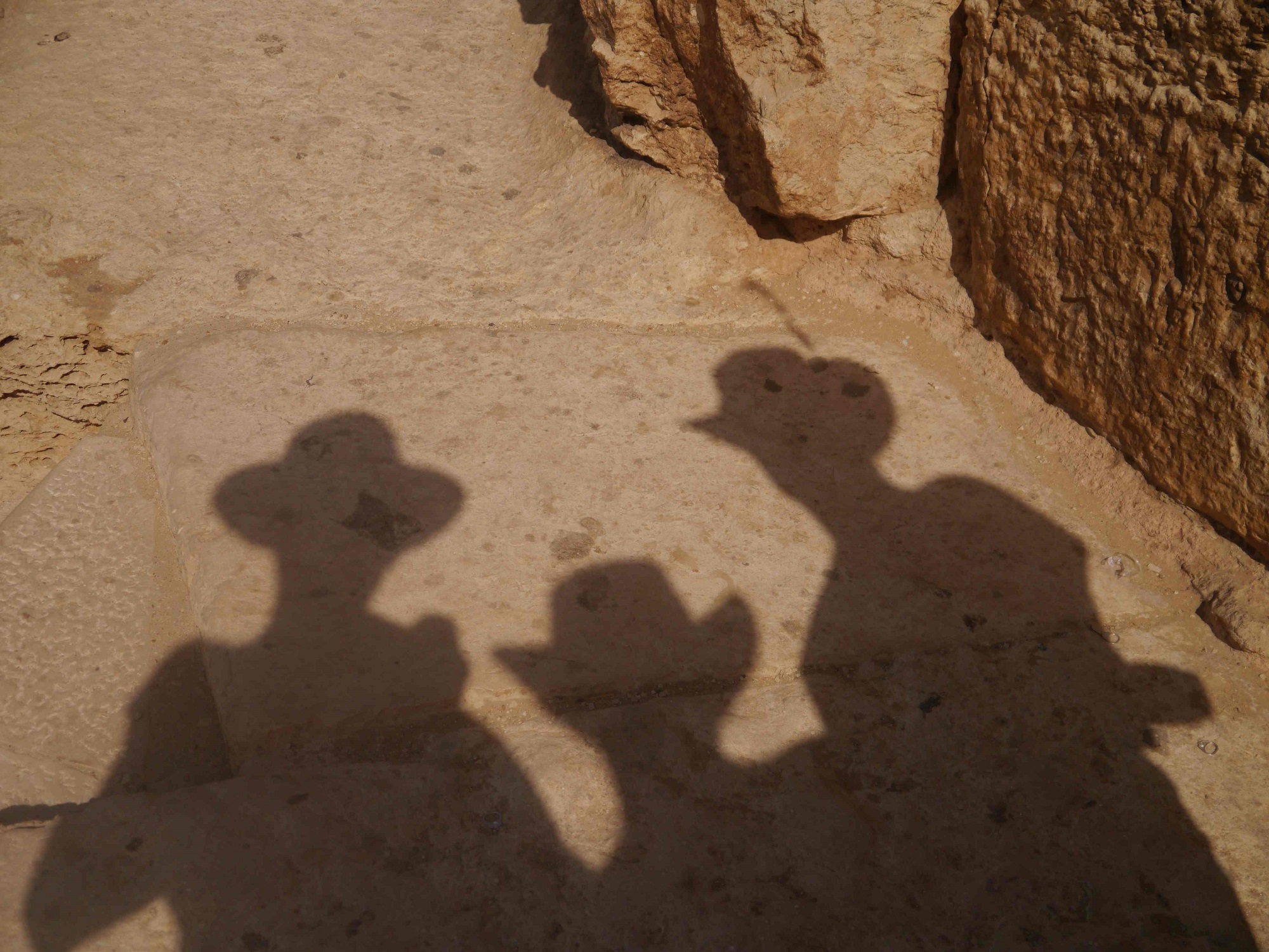 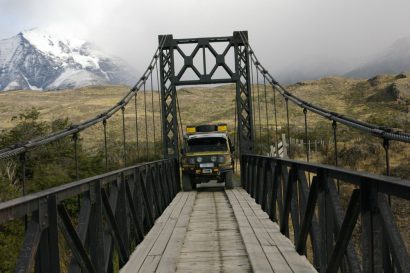 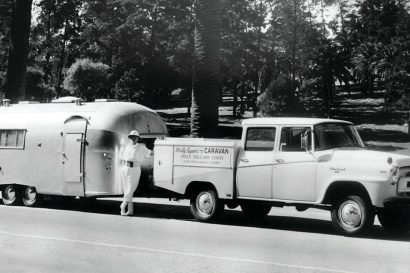 Capetown to Cairo: An Airstream Caravan Takes On Africa 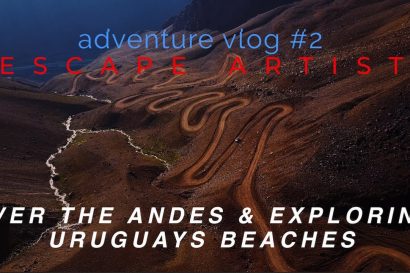 Video of the Week: Escape Artist in South America