When the first images of Suzuki’s 2014 V-Strom 1000 ABS Adventure emerged, I wasn’t sure what to make of it. I might have even been a little put off by its me too styling and prerequisite beak. If that front fender were a name tag, it would read, “Hello, my name is Adventure Bike.” It seemed to be trying too hard. To be fair, at that time not much additional information was made available.

I’m not ready to say the new big V-Strom has since grown on me but the fact is–– okay, it has grown on me. It is a quantum leap forward from the previous 1000 V-Strom on almost every level. For starters, it has a new engine with more power, greater torque, better cooling, and fuel efficiency has been bolstered by more than 15%. The previous engine was one of the best power plants I have ever owned, so an updated version sounds promising. To attain this improved level of performance, Suzuki redesigned nearly every facet of the 90-degree, DOHC, liquid-cooled V-twin. The piston rings are thinner, the cylinder heads have been redesigned to accommodate two Iridium spark plugs, and Suzuki’s SCEM-plated cylinders reduce friction. New 10-hole fuel injectors replace the previous 4-hole injectors for more efficient combustion. No trick was overlooked in the complete revamp of the V-Strom’s new heart.

Further improvements to the ride experience include a better windscreen, more refined adjustments to the suspension, repositioned ergonomics, and a new LCD display. Most importantly, the new V-Strom features Suzuki’s first ever traction control system. This is a key feature and keeps the V-Strom abreast of the complex systems now offered by the competition. I can’t imagine it being as good as BMW’s traction control, which really is brilliant, but early reports suggest Suzuki’s first attempt is quite impressive. Controlling stopping power is a Bosch-designed ABS system that monitors wheel speeds 50 times per rotation. All of this in a package that is just slightly lighter than the previous model. 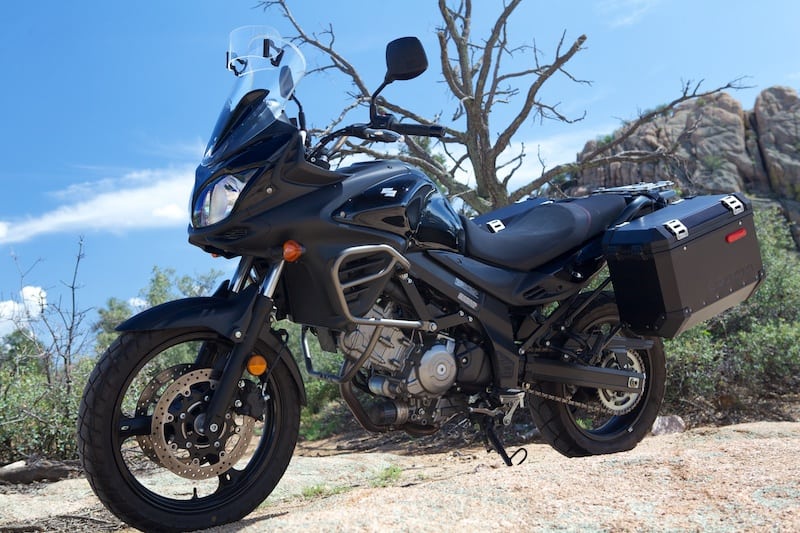 No self respecting adventure bike is complete without an abundance of farkles, and Suzuki offers a bevy of optional accessories like the integrated three-piece luggage system, heated grips, crash bars, and all the other key goodies adventure riders desire. I wonder if genuine adventure riders will like the hard cases. Why they didn’t stick with the more robust cases used on previous iterations of the 650 Adventure, vexes me. There is no question, Suzuki really hit it out of the park with the new technological updates to what is already a popular platform. There is also no doubt they cheated a tad with the styling and peeked at BMW’s homework, but that’s pretty typical these days. Have you seen the grill on the Aston-Jag-Ford?

With the retail positioned at $14,000 for the V-Strom in Adventure trim, it is by no means a cheap motorcycle, but it is roughly $3,000 to $4,000 less than the BMW R1200GS-A and KTM 1190 Adventure. Is that enough to win it frugal shopper points? I have to think so, and with a dealer network that far outreaches that of BMW and KTM, the servicing convenience may also be alluring to some. The 2014 V-Strom 1000 hit dealer showrooms last month. 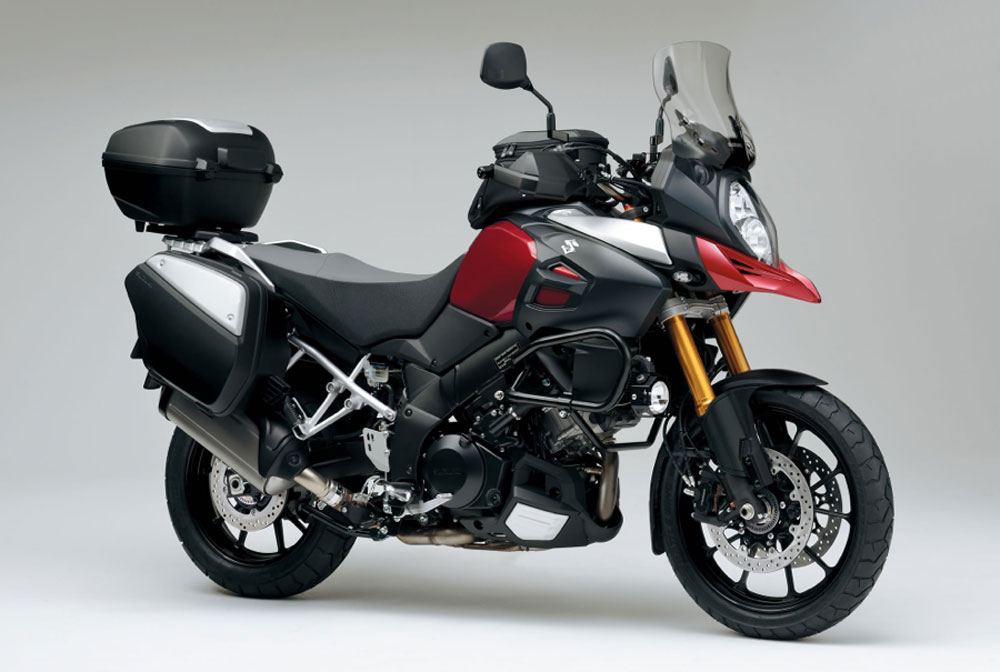