Major Obstacle: The major obstacle for this expedition was the remote location. If traveling unsupported, you could be required to walk 30+ miles to get help. (Note: It is particularly important to monitor the tides, as they can rise over two meters, and easily trap a vehicle. The salt flats can also be dangerous, as traveling even a few feet off of the compacted main trail will likely result in a stuck vehicle)

BajaTaco and Wife in his 1998 Toyota Tacoma
Several other vehicles and riders from 4wdtrips.net

The first day of our Sierra Pinacate adventure started with an early meeting location in Yuma before crossing the border at San Luis. The group crossed easily without any secondary inspections. Soon we were driving south on SON40 towards El Golfo de Santa Clara. We were waved through the military check point in El Doctor and drove the remaining 25 miles to the start of our trek. We topped off our gas tanks in El Golfo, and some in our party purchased fresh clams from the local fisherman.

As opposed to our inland route taken on our last trek through the Altar Desert, we followed the coast of the Sea of Cortez for about 23.5 miles, stopping for lunch and enjoying the view of the sea. After driving below a few miles of sharp cliffs (use caution in high tide), even requiring a few shallow water crossings, we made the turn NE towards the salt flats @ (N31 29 50.2 W114 09 39.2 NAD27 Datum). We drove the ~22 miles from the sea to the rail road tracks, having a little fun on the smaller dunes.

A little “air” time in the Altar

Deep sand along the gulf

SE edge of the Altar

After taking the track NE along the salt flats towards the rail tracks, we took the road along the north side of the tracks heading east (N31 42 47.7 W113 59 16.4). There is signage for entering Gran Desierto De Pinacate Natural Park. The desert unfolded before us and we were treated with a beautiful array of wild flowers. The track held a completely different visual impact then our trip in October. There was a thick bouquet of primrose, Verbena, Globe mallow and Lily. It was totally breathtaking! We were also treated to an Osprey and its large nest.

We drove along the tracks for 12 miles, before exploring a side trail (N31 37 58.4 W113 49 14.6) to the south of the tracks. This side trail weaves through the salt flats and comes back the the main trail 8 miles later (it is much slower than the main track). We drove the short distance to the small rail station of Gustavo Sotelo, where we made camp along the beach that night (N31 32 37.2 W113 44 30.5). We were treated with a fantastic sunset over the Vermilion Sea.

Part of the expedition

We broke camp, brewed hot tea for the day’s journey, and left the sea and headed north into the Altar desert in search of a southern approach to the Sierra Pinacate. After exploring several roads, we selected a well defined track that went north towards the Volcan Santa Clara. This road began an eastward turn, and we were soon back onto MEX8. We were aware of another road into the Biosfera del Pinacate approximately 17 miles north of where we entered the highway. MEX8 is a very well maintained road that takes travelers to Puerto Penasco (Rocky Point).

The Altar was in full bloom!

We drove NW into the Altar, south of the Volcan El Pinacate, on a narrow track of drivable terrain between the tall volcanic slopes and the 400′ dunes of the desert. This watershed yielded incredible flowers, with some wildflowers nearly reaching the top of the truck. The recent rains had blessed the desert.

This route was one of the more challenging I have encountered in Sonora, and would require a high clearance 4wd with good tires due to the sharp rocks and deep gullies. We continued NW crossing several lava flows. The scenery held such amazing diversity, beyond what one could comprehend in this arid, rugged place.

We made camp 2 at the edge of the sand dunes with plenty of time to explore on foot. Taking advantage of the cool temperatures, we ventured into the dunes, climbing the tallest in the area at ~400′. From the top of the dune you could see the Tinijas Altas in US, and the Gulf of California.

We left camp early on day three, with our sights set on the massive craters South of Sierra Hornaday. We drove from our camp by the dunes through the massive lava flows, canyons and washes of the western watershed of the Pinacates. Route finding in this remote area proved challenging, and we were thankful for the 2M HF radios installed in our vehicles.

We drove north until reaching the Tinaja de los Papagos (Tanks) where we stopped for lunch and to explore these natural cisterns in the rocks of this narrow canyon. These tanks are one of the few year round water sources in the Pinacate range. There are several tanks that hold water up the canyon. This is an easy hike/scramble, but worth the trek (N31 55 07.3 W113 36 25.6).

A view down the canyon and of one of the Tinajas

This was a fantastic trip, made even better by the blooming flowers and great companions! 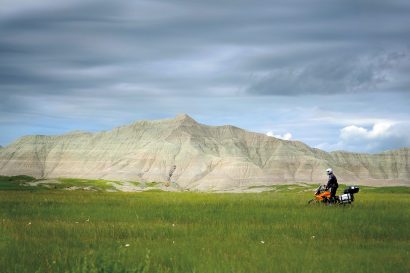 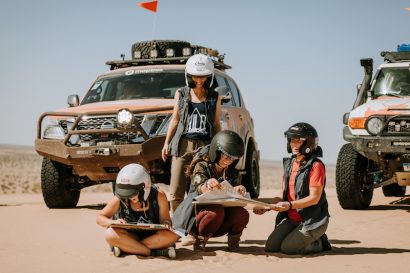 Is the Rebelle Rally the Most Important Off-road Competition in North America? 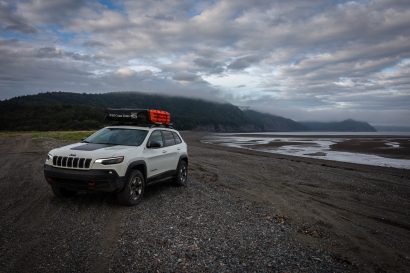