In the process of building our Land Cruiser Troop Carrier into a proper 4×4 tourer, we realized the long-term sustainability of the vehicle would be based upon our comfort. Driving a vehicle from 1985 is inherently less luxurious than a modern ride, but it would be foolish of us not to do what we can to increase our standard of living. Improving ride quality and generating more horsepower are well-trod paths, but sound control and thermal insulation are a different story. These were the only two areas where Olivia and I were unsure of how to proceed. Sound control was also the area most in need of improvement in our Troopy. 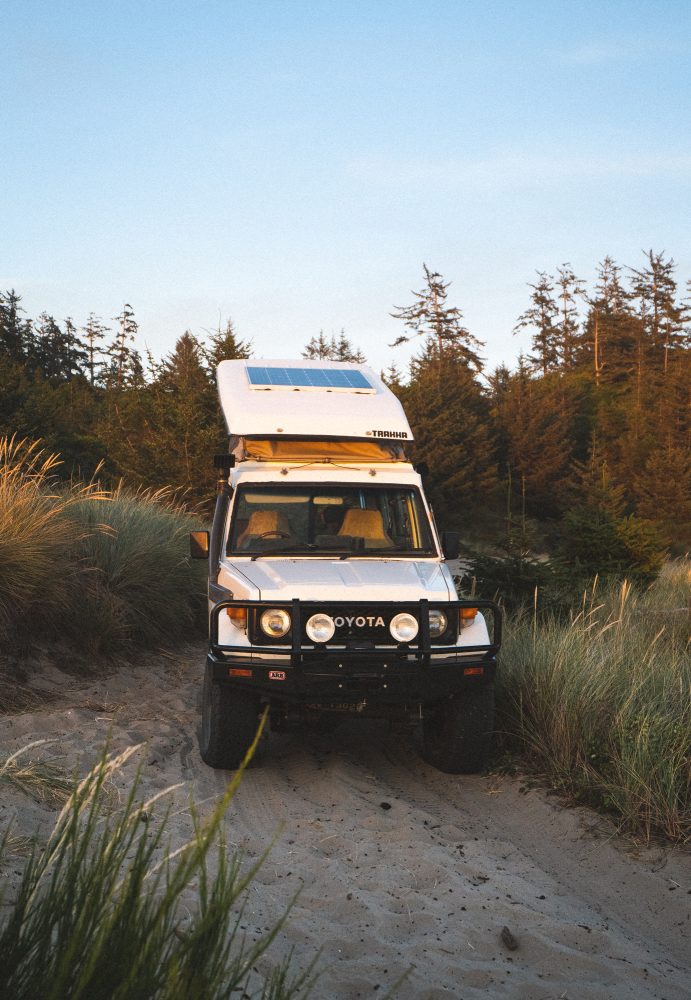 We found driver fatigue built up fairly quickly in our Cruiser, and a weekend trip was regularly followed by a day of recuperation. Warm weather made the situation even worse as the lack of A/C required the windows to always be down. The noise of the diesel engine combined with air rushing through the windows at 60 mph gets old pretty fast. Nearly the entire floor of the vehicle was covered with a Noico butyl sound control mat, but it didn’t seem to dampen the noise much. A large reason was that the hood remained uninsulated, allowing all of the engine noise to be easily transmitted into the cab.

Our first thought was to use a butyl mat for under the hood, but the Noico in the cargo area had melted and deteriorated simply from the interior temperatures and the impact of walking and standing in the cargo area during weekend trips. The rubber adhesive was also prone to serious off-gassing, filling the cab with a chemical scent in the heat of summer. For those reasons, we were hesitant to install another butyl mat, even from a higher-quality brand. We weren’t sure what other options were out there, which left us at a standstill in the build. 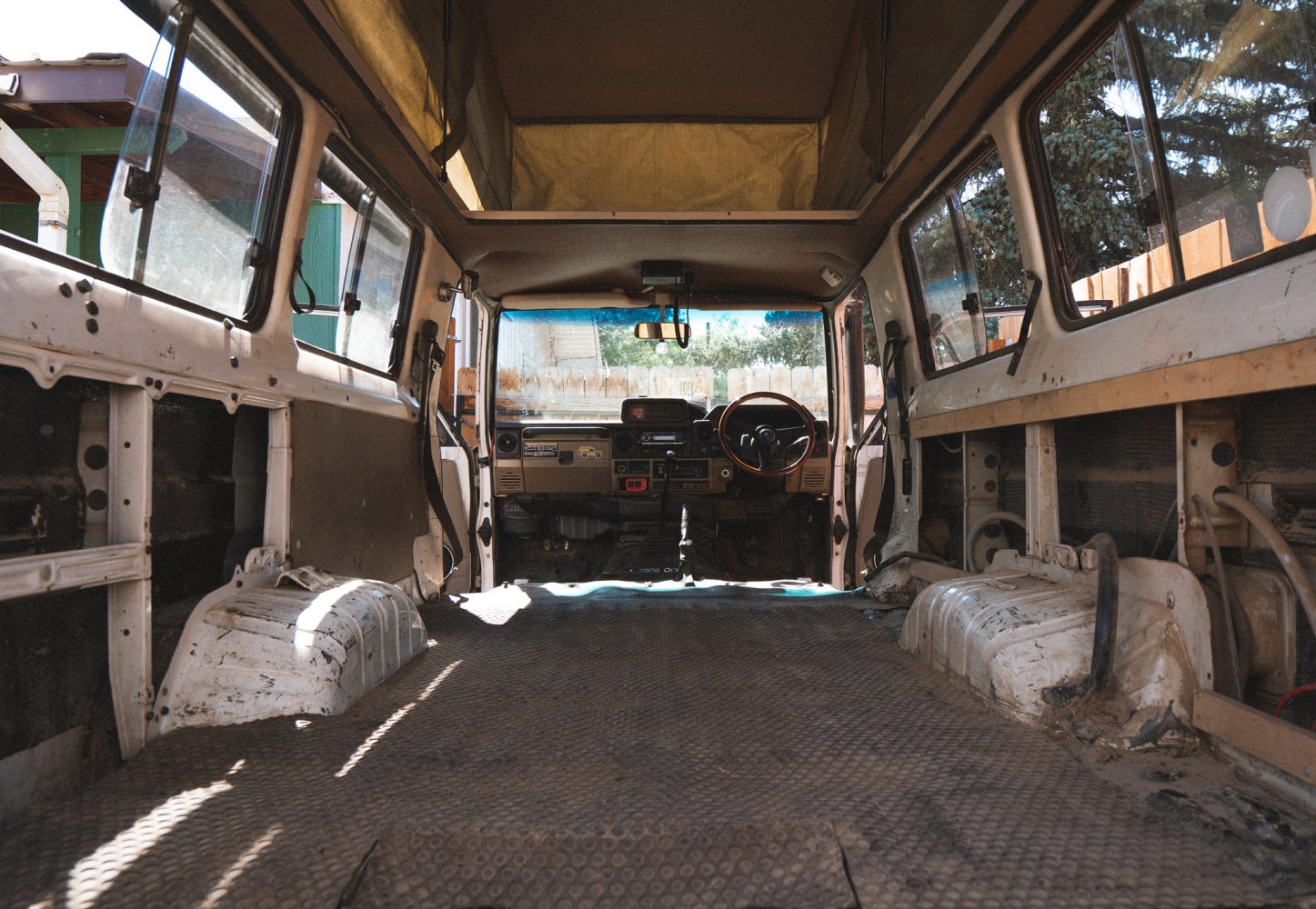 Early in the spring of this year, Olivia and I met up with Tim and Kelsey of @dirtsunrise. While drinking a few beers, they told us about their Pan American overland travels and full-time life on the road. As we toured each other around our vehicles, I mentioned our predicament with noise levels and the lack of potential solutions. At this, Tim took us over to their pop-top, 80-Series Land Cruiser and introduced us to the product covering their floor pan. They had sprayed on Lizard Skin insulation prior to heading south. After a few questions, this insulation seemed like a solid solution to our problem.

Lizard Skin offers sound control and ceramic thermal insulation products. Both are sprayed on with a paint gun, provide a vapor barrier, and don’t retain moisture when they get wet. They are also suitable for use on the underside of the hood. After speaking with Lizard Skin about their insulation, we were sold on that route. Before we started spraying, though, we had to address the melted Noico sound mat and the rust laying beneath it. 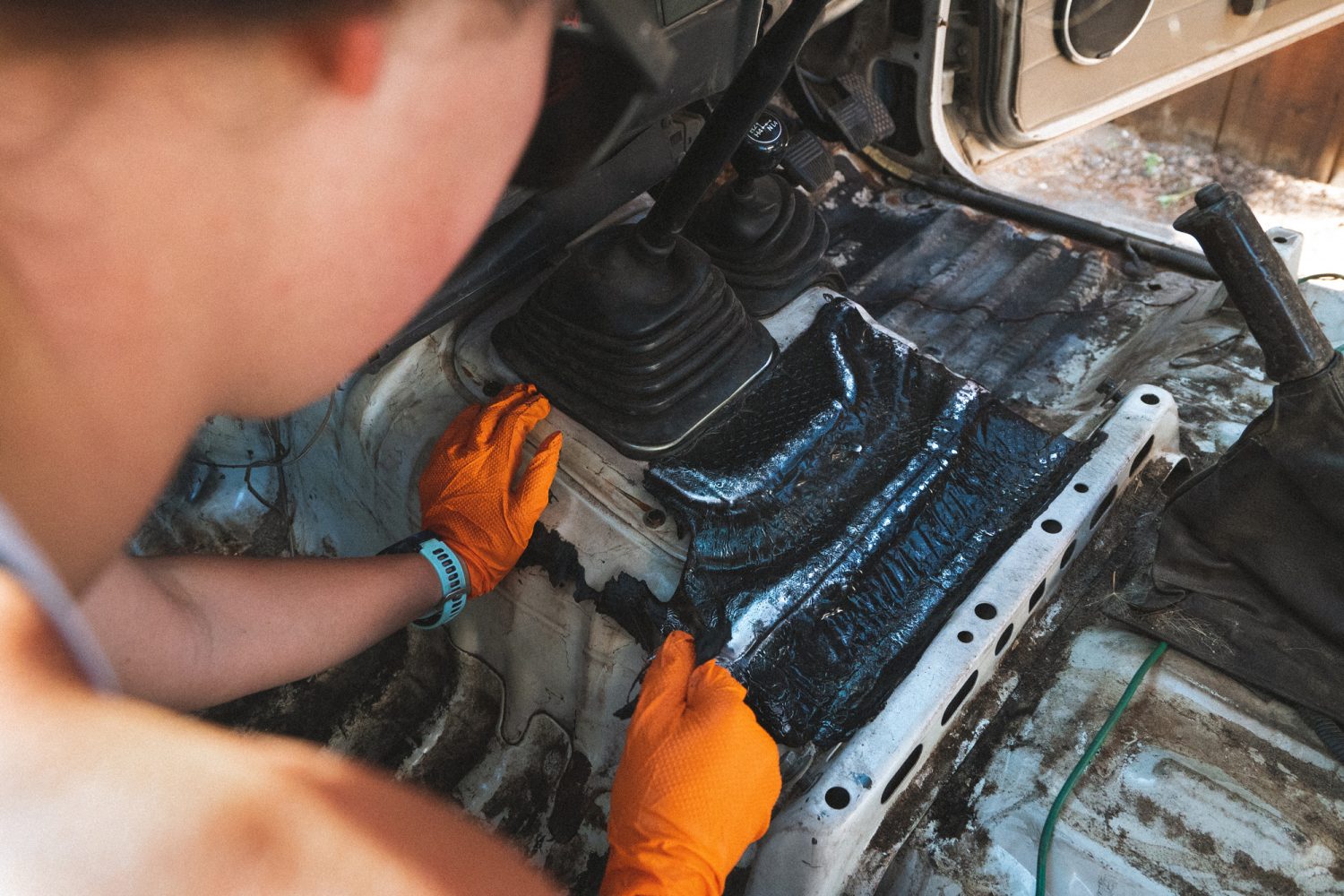 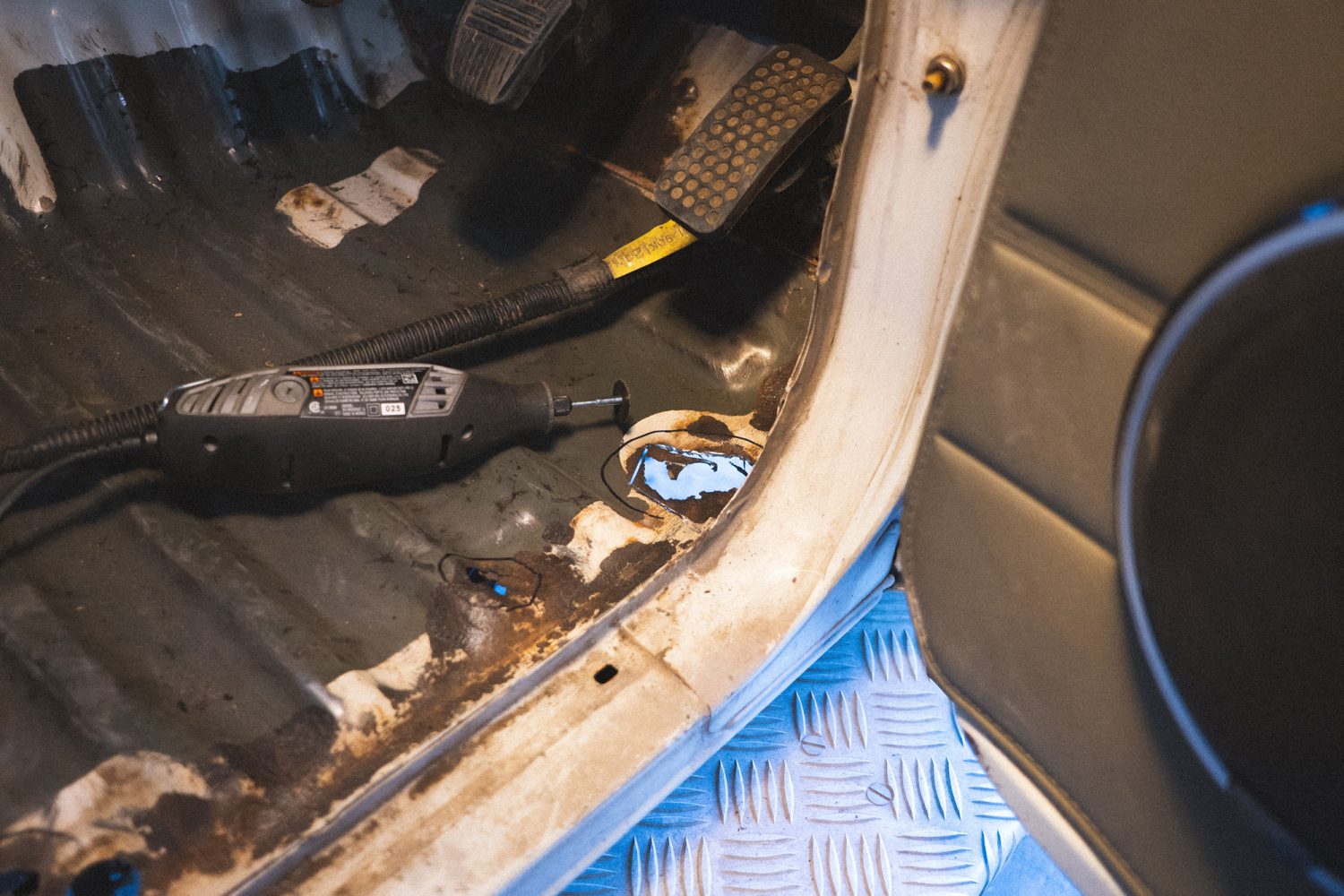 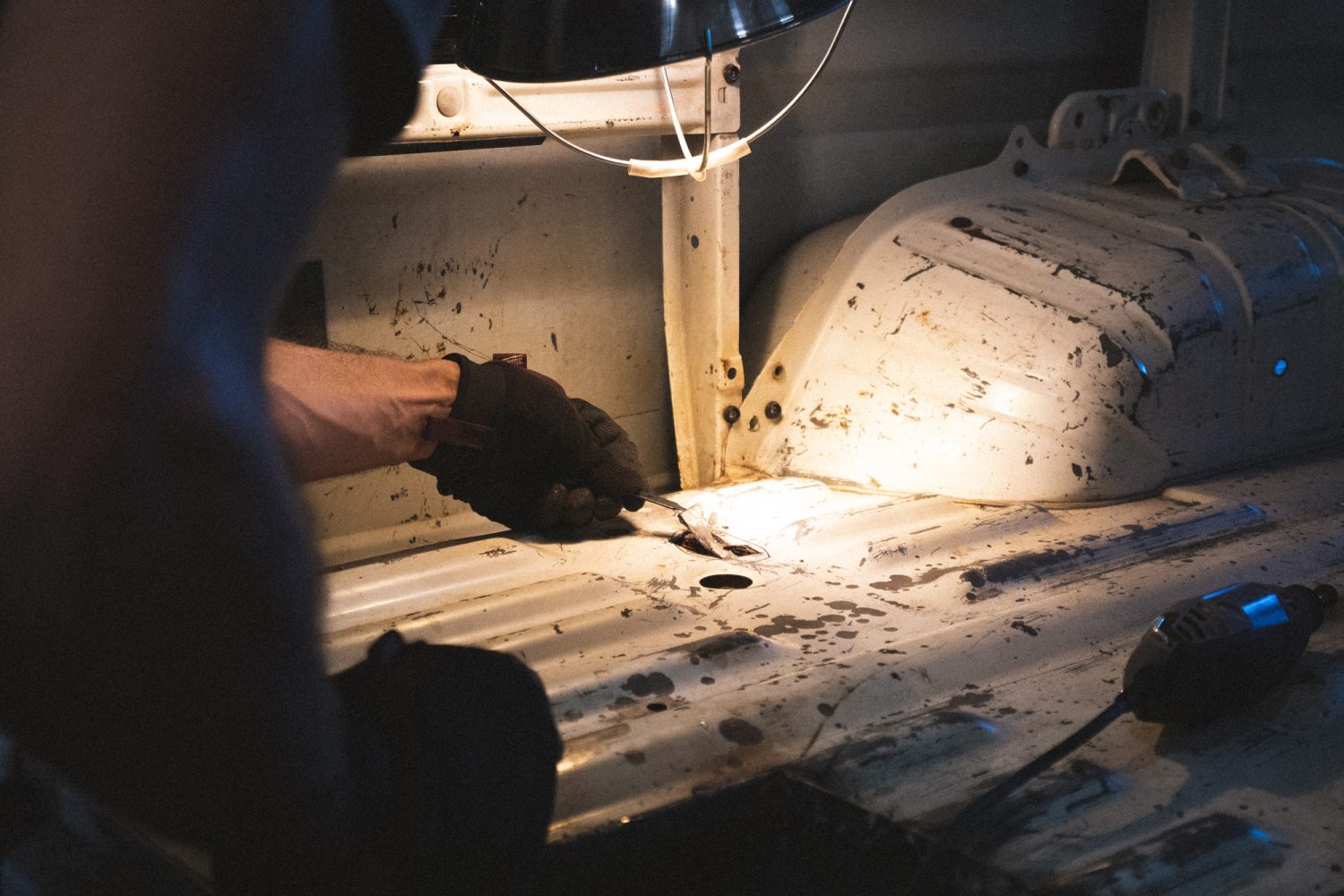 Removing the Noico butyl mat was a laborious job. The majority of it had deteriorated into a thick goo that stuck fast to every surface it touched. The rubber was too weak to pull off in big sections, and attempting to scrape it off just resulted in the butyl smearing further onto the floor pan. Regardless of what method we chose, it was a slow process. Every sheet of butyl we removed revealed more and more rust. Fortunately, the majority was either surface rust or areas of moderate pitting. As we got to the center of the cargo area, though, there was a large section of heavy pitting and multiple holes. Overall, there was significantly more rust than we were anticipating. 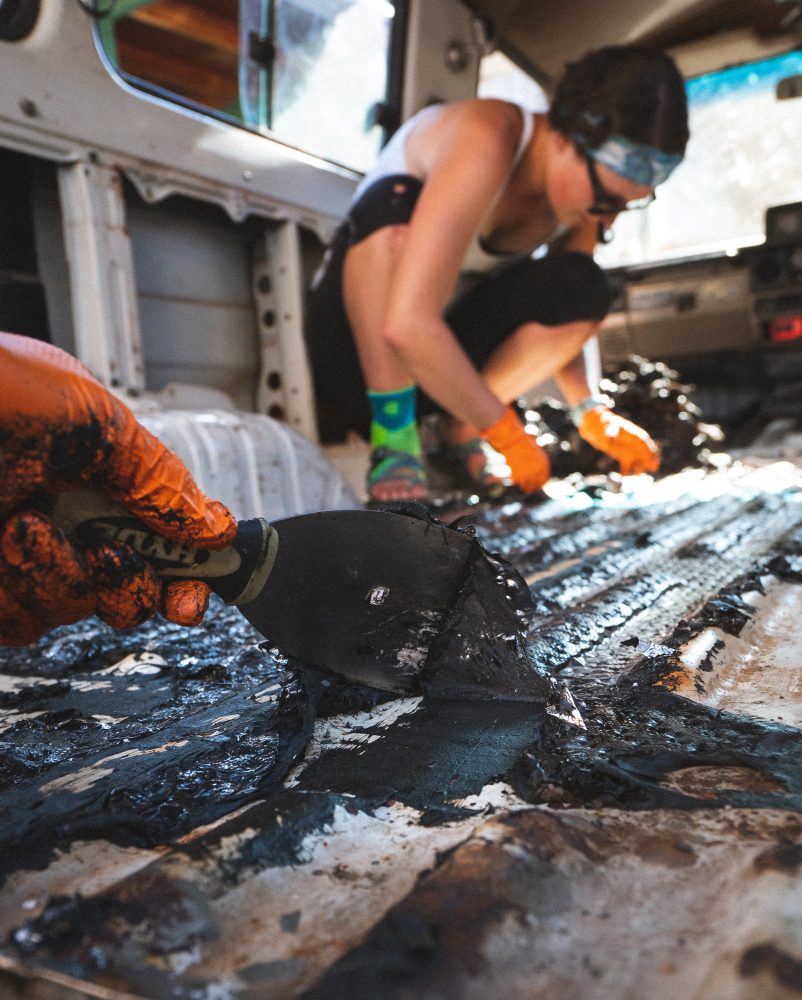 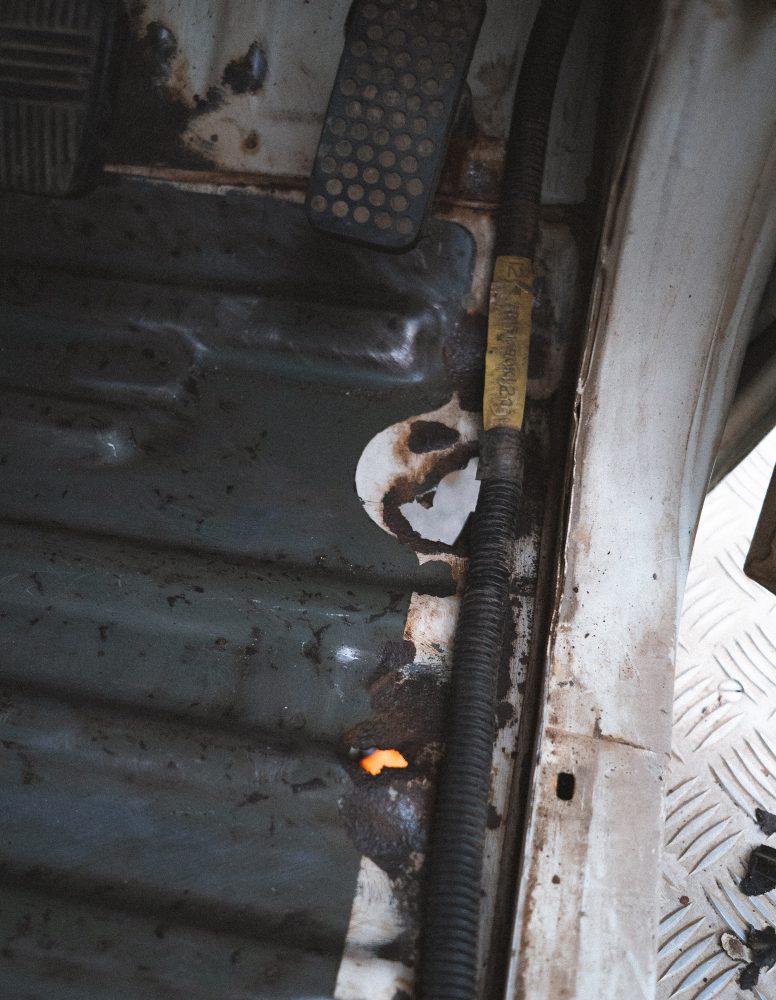 Despite all the rust, the floor pan cleaned up fairly well, and I knew this portion of the build would move along nicely. By this point, I had realized the rust automotive repair wasn’t a job I would be outsourcing. I would have to learn to weld and do it myself. Every shop I talked to in town either refused to take on the job or was asking an astronomical price. Thankfully, I had easy access to a shop and welder just a few miles down the road at my family’s farm. 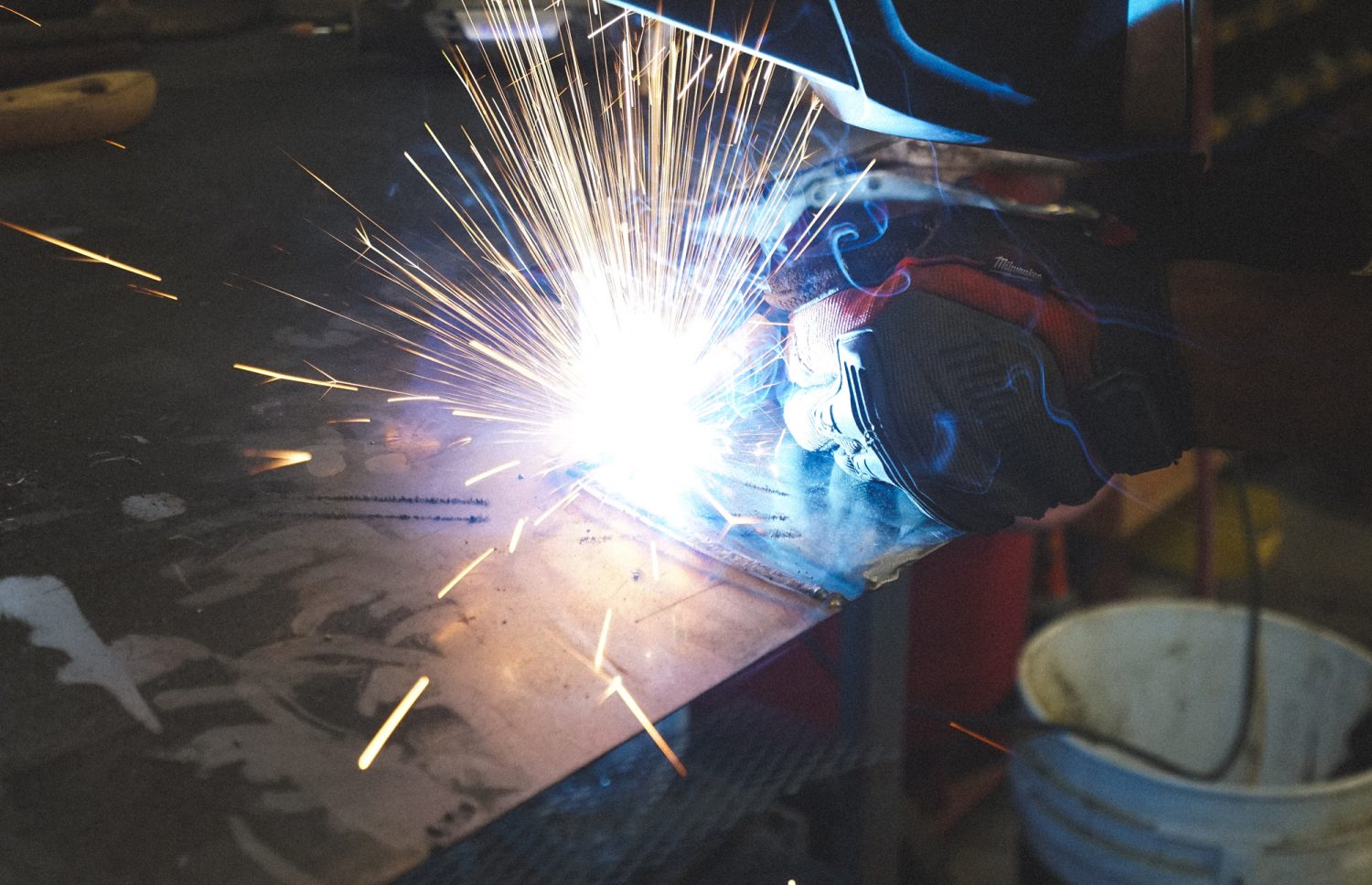 I spent two evenings learning to weld before diving into the repairs. My heart raced from the first cut through the completion of the first weld. As I lifted my visor up to see a solid bead, my anxiety was replaced with a sense of fulfillment. Now I had to do it 20 more times without cutting corners. The scent of heavy metals hung heavy in my nostrils, but the hours flew by as I cut, shaped, and patched each hole. Transforming that patchwork of sheet metal into a cohesive repair will be burned in my memory for some time to come.

It took two full days to remedy every bit of rusty floor pan I could access and an additional half-day preparing to spray the Lizard Skin. After mixing the sound control spray, we were ready to begin. The electrical had been taped off, bolt holes covered, and the air compressor was full. I pulled the trigger, and we were off. The Lizard Skin is a semi-viscous liquid, so it sprays in more of a spitting action than a clean stream. We worked our way through small sections, building up to the recommended 40-millimeter layer for the first coat. We also contacted www.Autoglassguru.com to get the windows replaced. 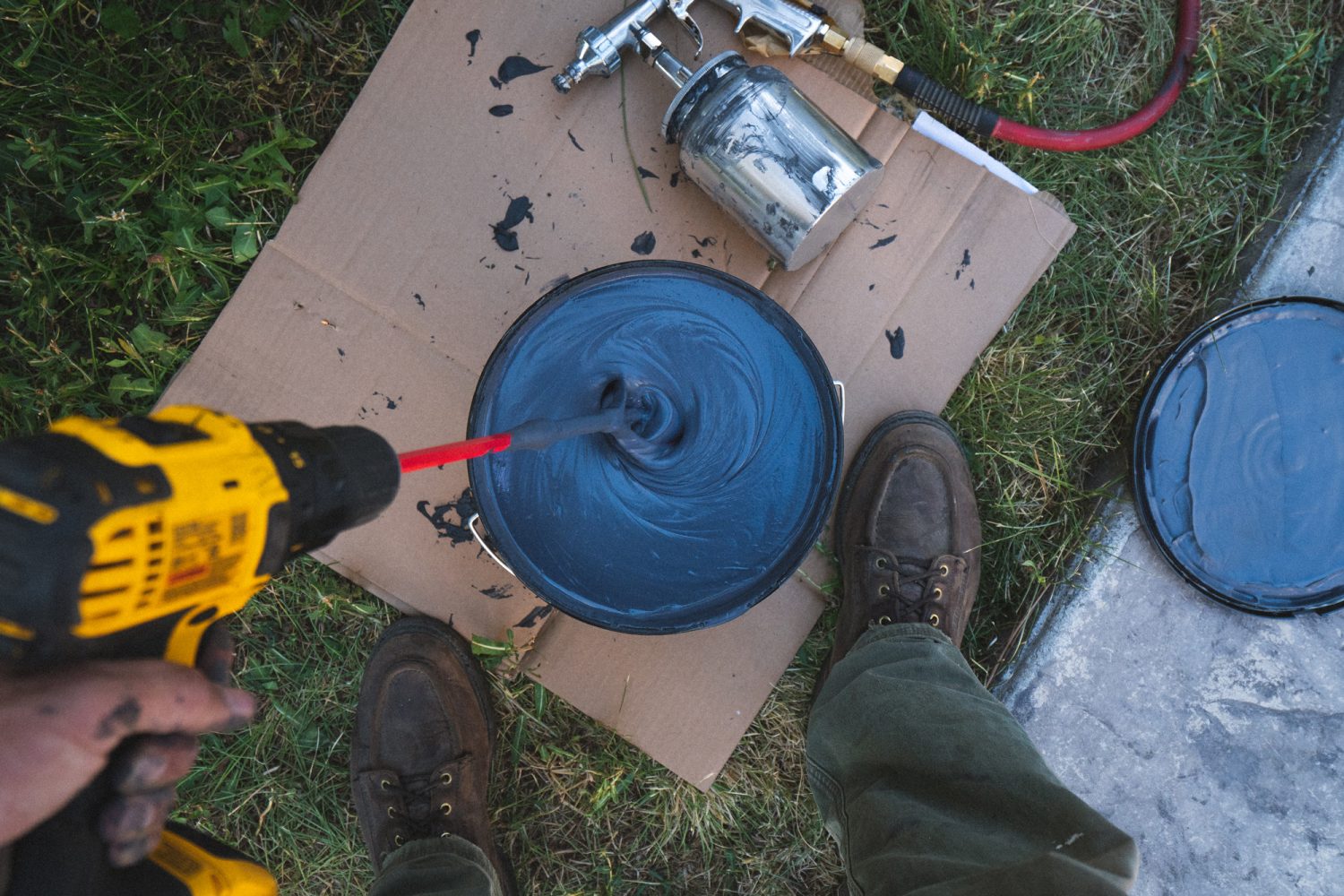 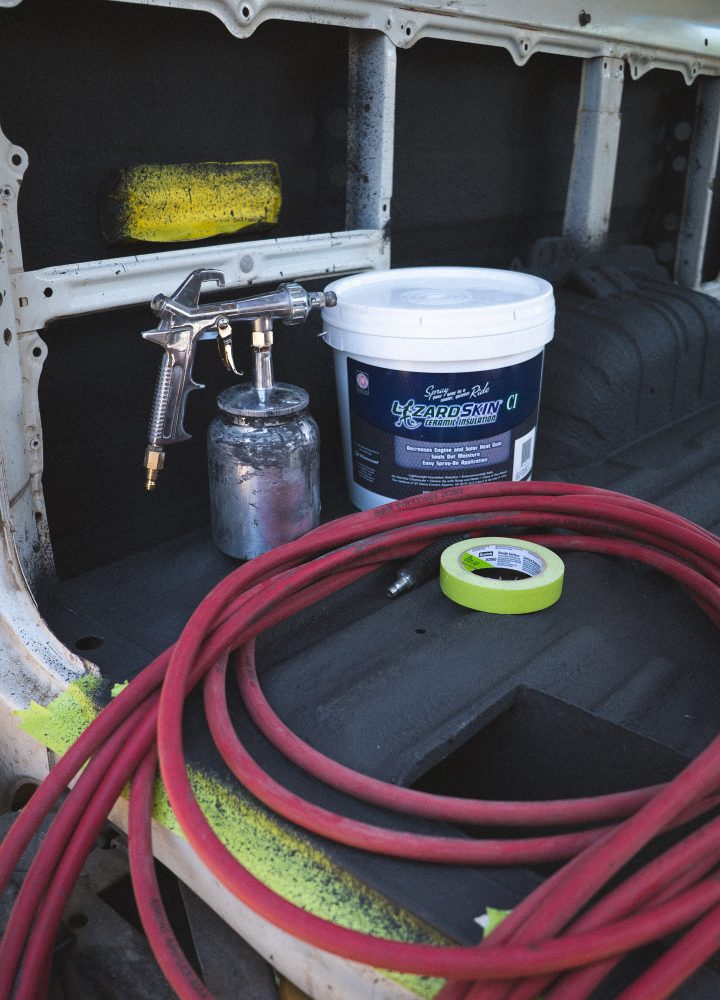 About an hour later, we got started on the second and final coat of the day. When applying both products, the sound control needs to be sprayed first and fully cure for 24-36 hours before applying the ceramic insulation. It was a long but easy process to spray four coats on the floor, inner walls, and hood of the Troopy. Once the final coat was done curing, I stood at the back of the vehicle, amazed at the transformation. Two weeks prior, the interior was sticky, smelly, and rusty. Now we had a solid, incredibly polished base to start building out the cargo area. The real question was what level of acoustic and thermal performance we would get out of the Lizard Skin products. 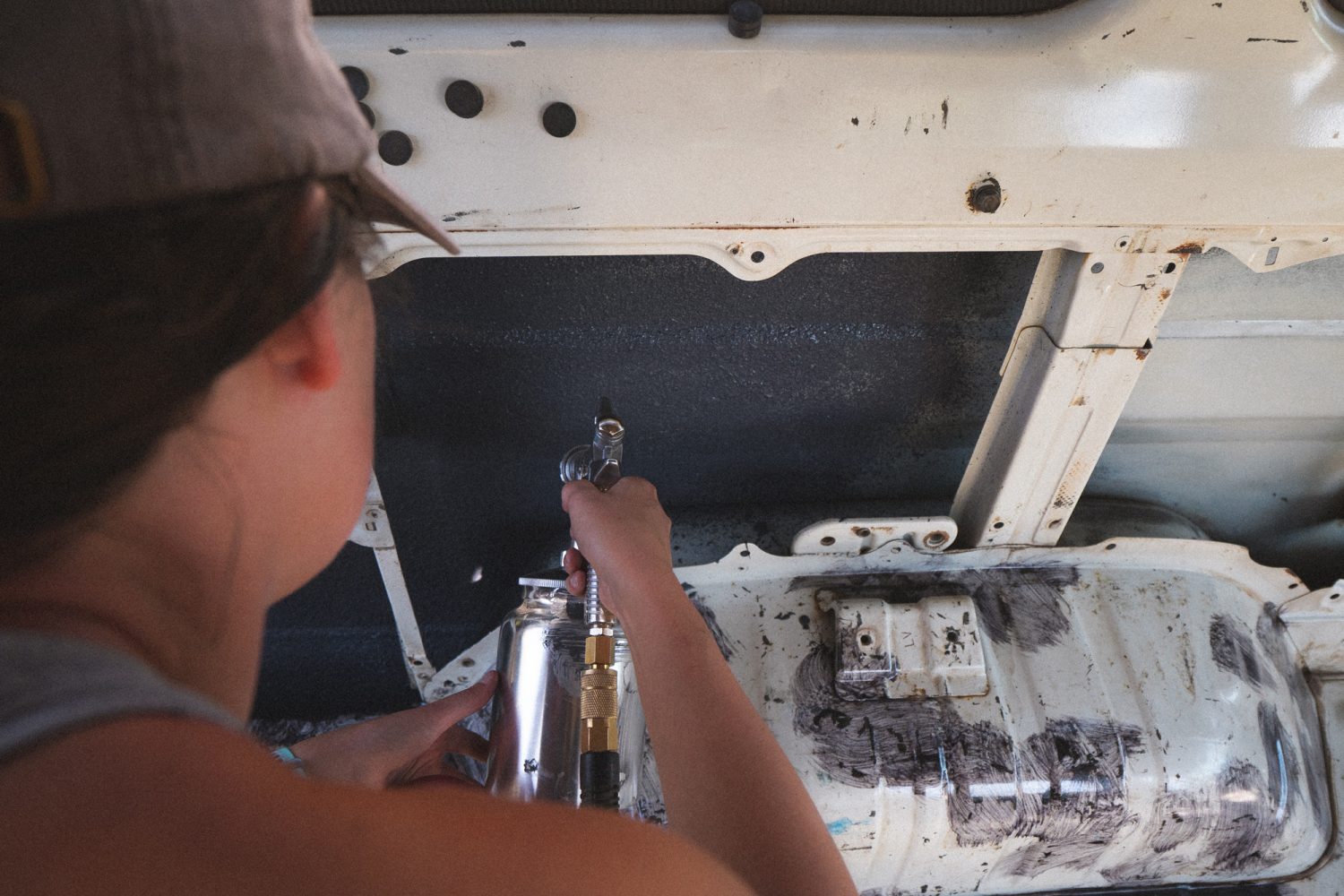 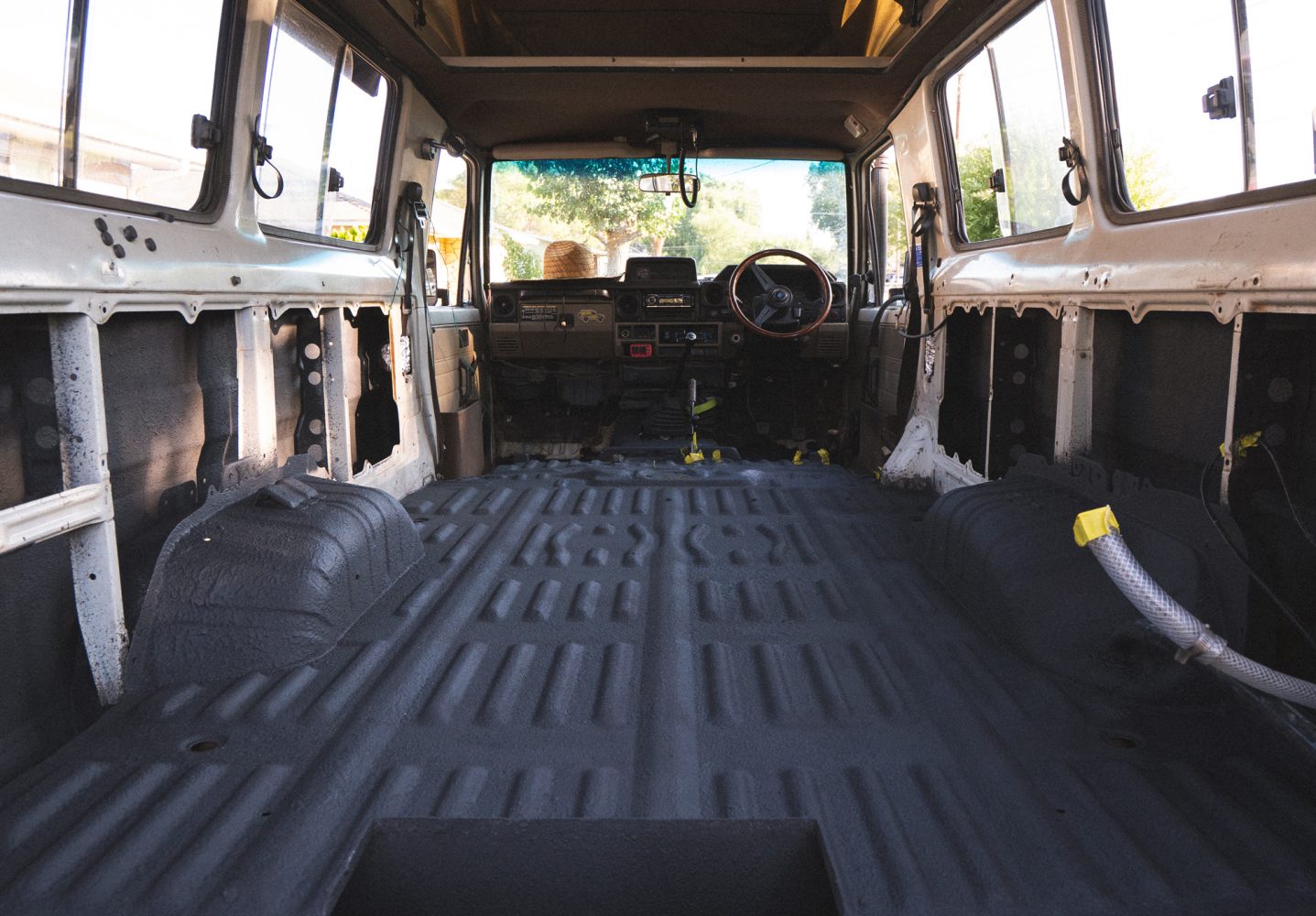 To put it to the test, we immediately embarked on a thousand-mile road trip, driving the entire length of the Oregon Coast and hundreds of miles on an interstate highway. Over the course of the three-day trip, 28 hours were spent behind the wheel. We were overwhelmingly astonished at how much quieter the interior of the vehicle was. As soon as we started accelerating to highway speeds, we knew we were in for a significantly improved driving experience.

In the past, driving above 40 mph rendered conversations quite challenging over the noise of the Toyota 12H-T diesel engine and the lowered windows. On this trip, however, we were able to talk very nearly in normal voices and listen to music at an appropriate level. Having the windows down was no longer the “final straw” that tipped us over the downhill slope of fatigue. The heat levels in the vehicle had also improved. Not only were we more comfortable, but the ceramic was blocking enough heat to prevent our Goal Zero Yeti 1000 from turning on its cooling fan in the nearly 90°F weather.

What had began as a daunting task was now completed. When this all kicked off, I was unsure of what the results of the rust repair and insulation would be. Now that this step of the build is behind us, I have been able to reflect on the process. Doing the welding repairs myself was the only financially viable option, and honestly, I’m glad I didn’t miss out on the learning experience. Topping it off with acoustic and thermal insulation that far exceeded our expectations has greatly improved the comfort of the Troopy. I know Olivia and I will find more relaxation on our trips now, and our dog, Roan, will sleep a little easier on the road with the reduced heat and noise. We are happy to have chosen Lizard Skin for the comfort and protection it will provide. Thirty-five-year-old vehicles are no stranger to rust, and any product that slows that advancement is worth its weight in gold. 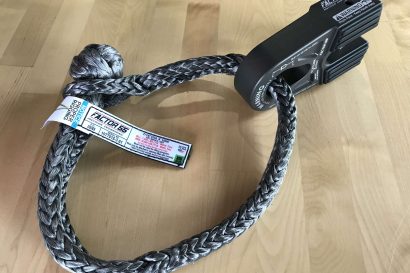 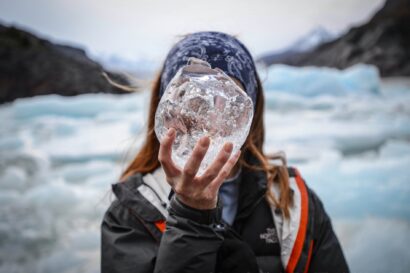 How to Stay Creative During Our New Normal 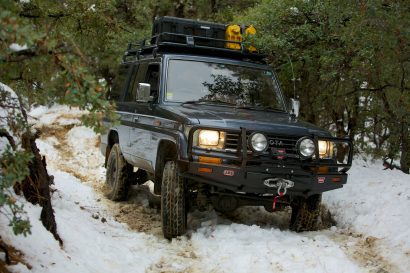