I’ve been using Yokohama Tire’s on my vehicles for over three years now, and have run both the Geolandar G015 A/T and Geolandar G003 M/T tire. I loved the performance of both tires but always wished for something between the less aggressive G015 A/T and knobby M/T. For me, the perfect tire is one that you can easily drive a long day of asphalt on, but can also handle hundreds of abusive miles on dirt roads, rocks, mud, snow, and anything else that gets thrown underneath them. Enter the Geolandar X-AT, Yokohama’s new extreme all-terrain tire. It was constructed to fill the gap between the brand’s G015 A/T and G003 M/T tire, an ideal tire for a vehicle that sees every terrain. It features an aggressive tread pattern to grip loose surfaces, a durable Geo-Sheild 3-ply construction, HD-2 tread compound for long-lasting wear and puncture resistance, and Five Pitch Tread Block Variation with ZigZag grooves for a remarkably quiet ride on the street. 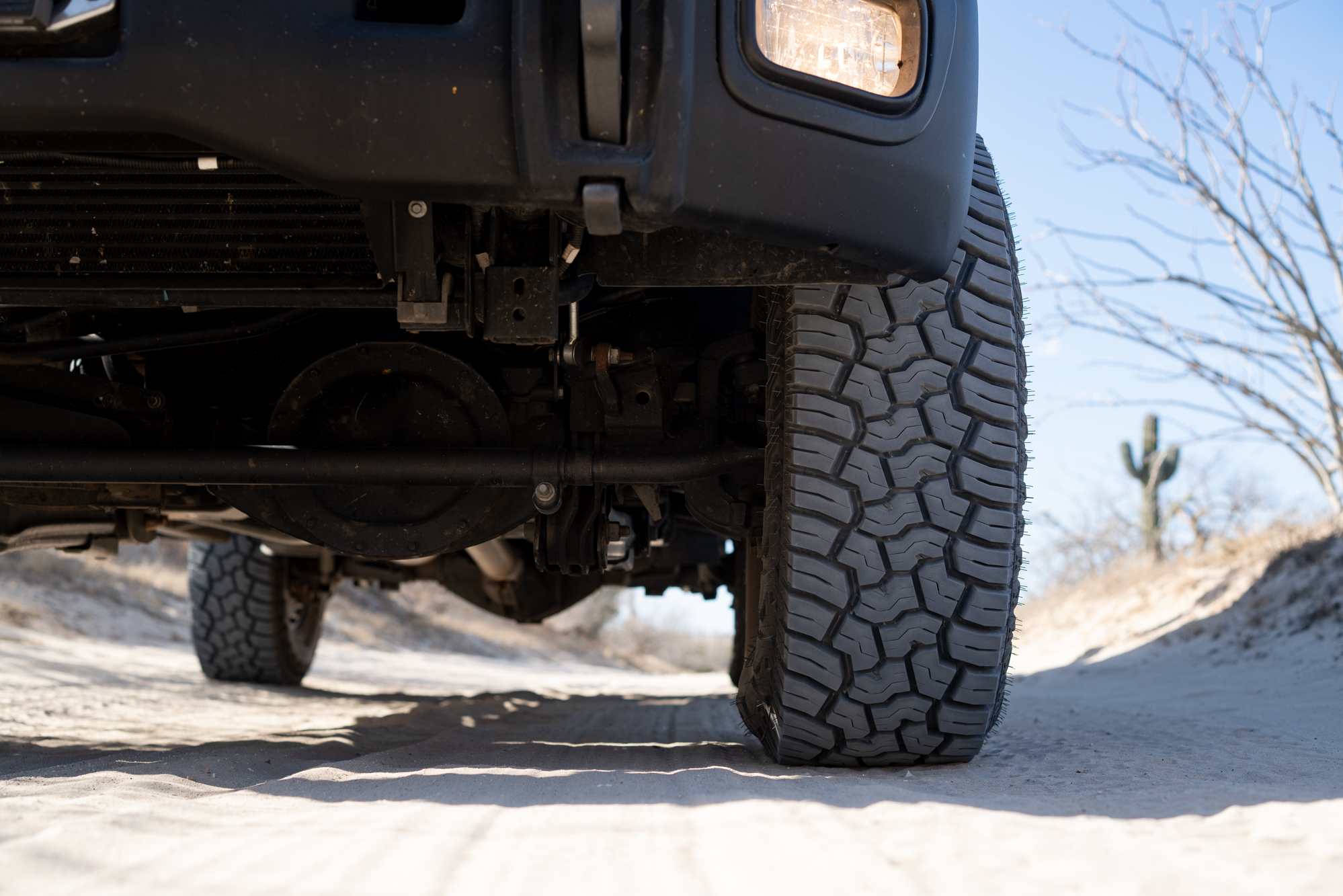 The task was simple, push the new Yokohama Geolandar X-AT to its limits in every terrain possible, and what better way to do that than chasing waves in Baja California, Mexico. The 1,000-mile-long peninsula projects south from California and is home to some of the toughest desert terrain in North America. Heavy corrugations, jagged rocks, and pothole-packed highways are just a few of the elements known to destroy tires in this remote paradise, and we would encounter far more than that on our search for the perfect surf spot. 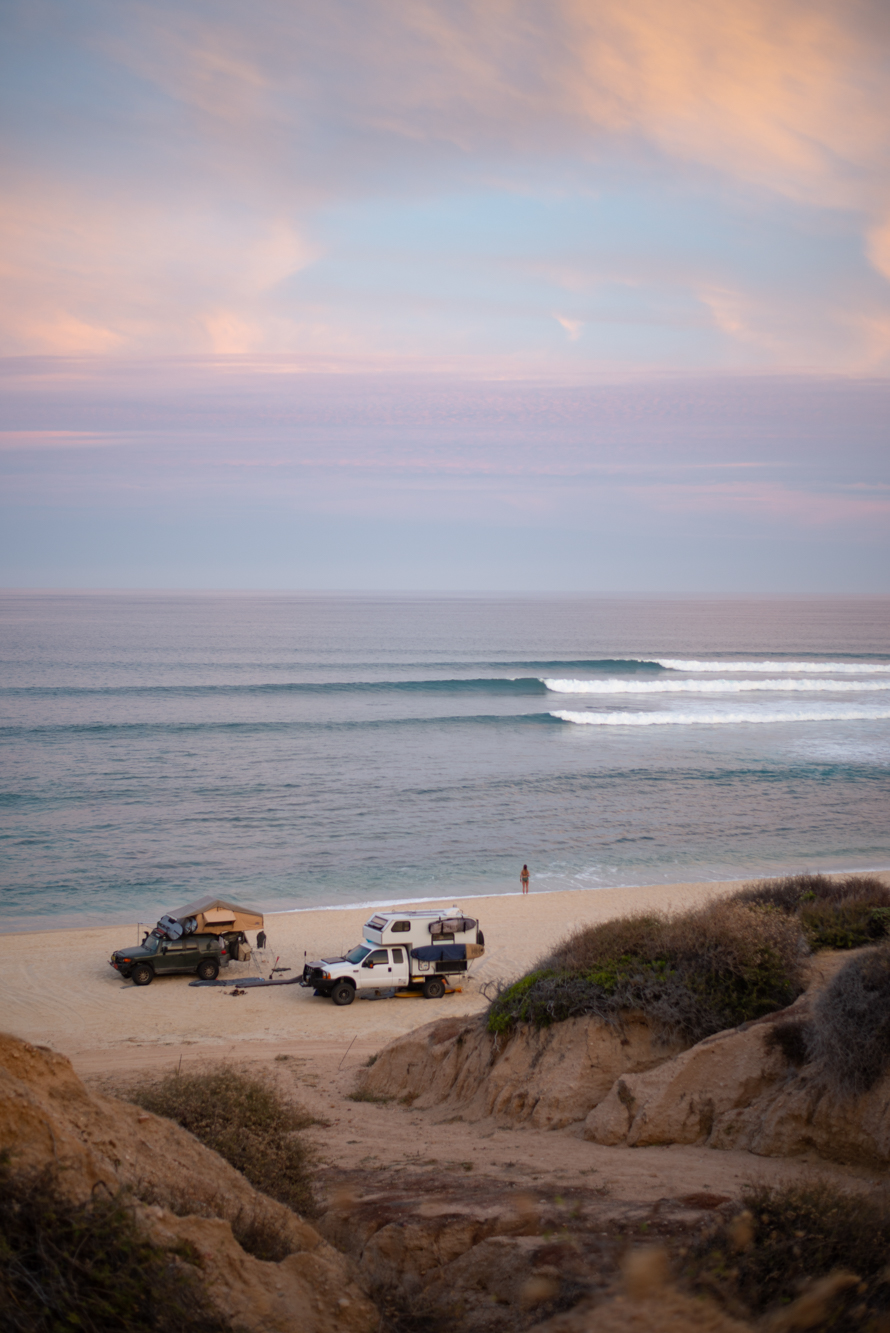 The peninsula has waves scattered all along its coastlines; some require you to drive across long stretches of washboard dirt roads, while others are more technical, or require driving lengthy deep sand beaches. For a truck the size of Bruce, sand is the biggest challenge, but I find momentum and adjusting tire pressure are the keys to success; tread pattern also plays a substantial role. Too large of a void between tread blocks can cause the tires to act like shovels and dig you down, but if the voids are too close together or too shallow, you’ll spin your tires trying to get traction. I feel Yokohama found the balance perfectly with the X-AT, utilizing a tread pattern and aggressive sidewall which retain enough of a void to maintain traction, without becoming so aggressive they sacrifice flotation. When aired down to 30 psi in the rear and 25 psi in the front I didn’t get stuck once while traversing the beaches of Baja, and it’s easy to bury a 6-ton truck to its axles. 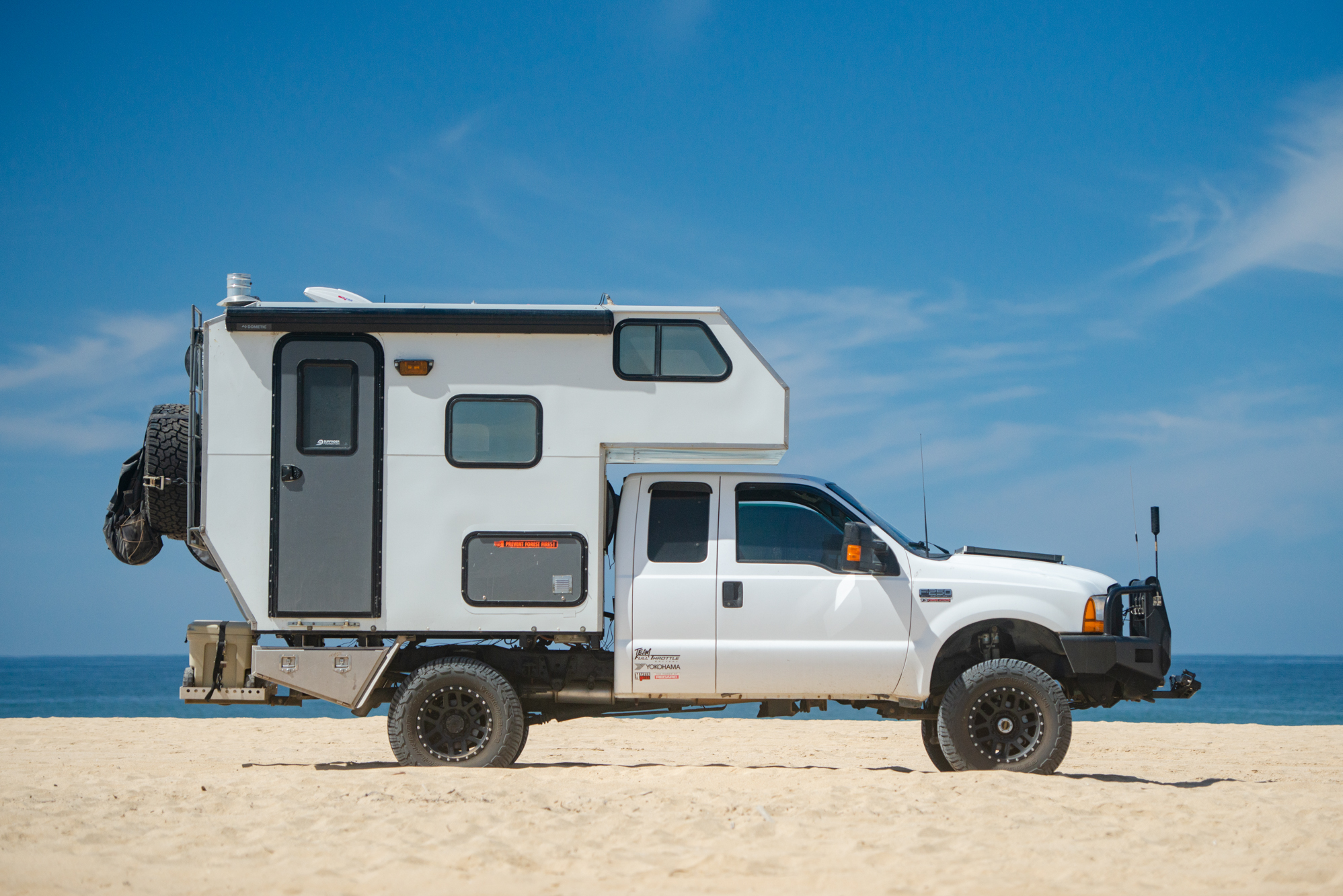 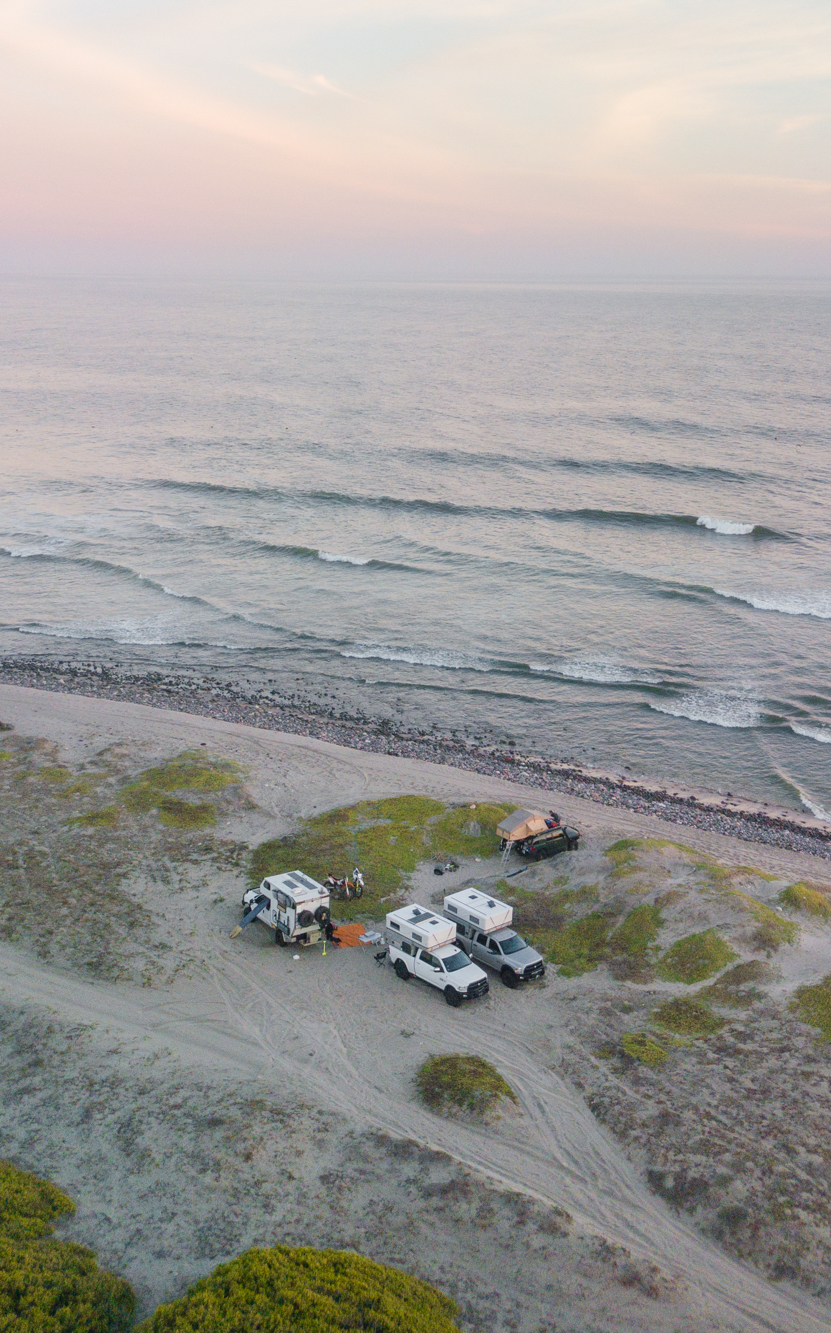 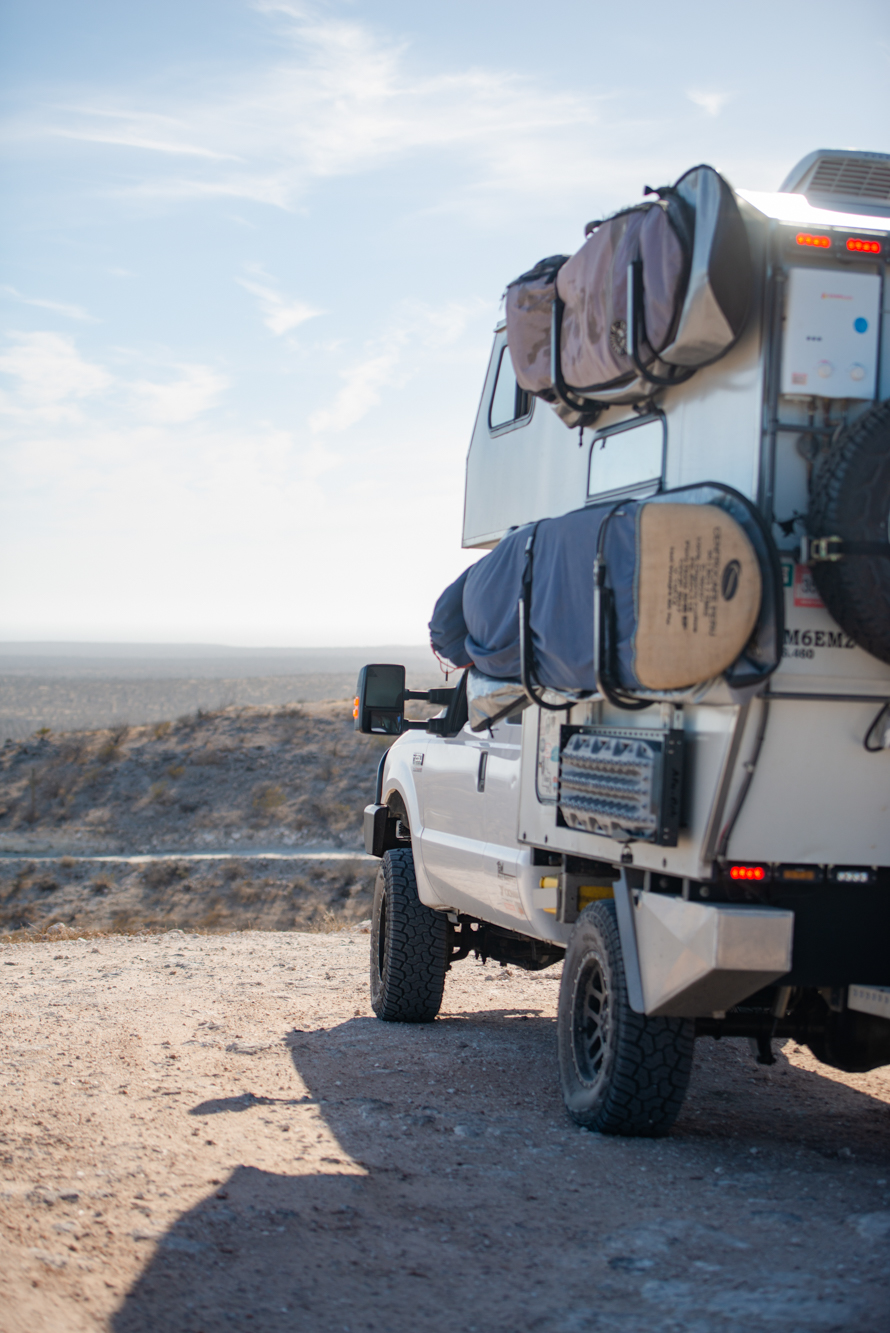 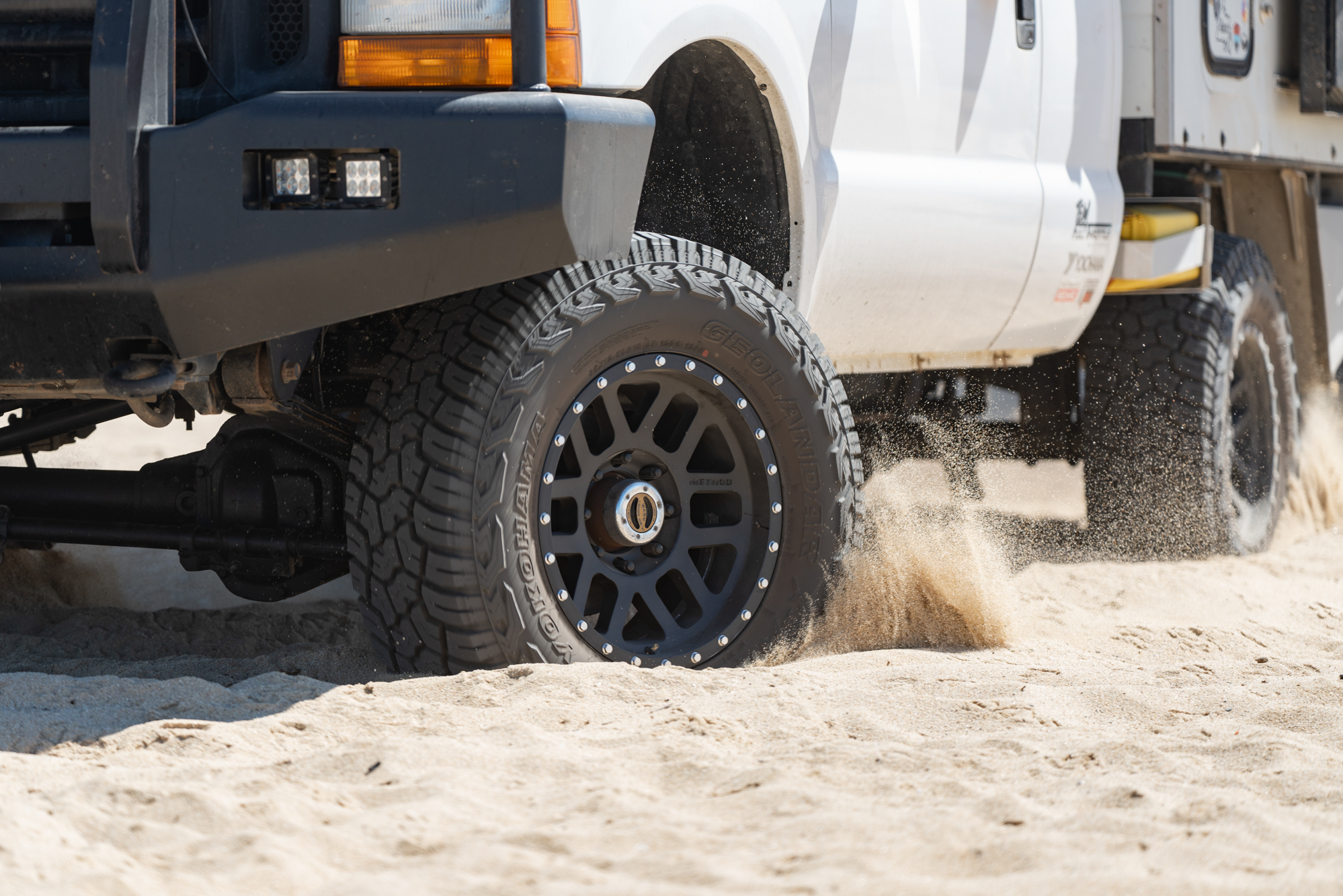 We had plenty of chances to test the X-AT’s durability south of the border as well. Though the majority of dirt roads weren’t technical, we frequently hit more than 50 mph on the long washboards before a set of potholes or rocks would take us by surprise. On a few occasions, a smooth section of sand would lull us into a false sense of security, then abruptly end in a mini rock garden forcing us to slam on the brakes to lessen the impact on the vehicles and tires. I was leading the caravan and can’t count how many times I caught myself flying into rough sections too fast, one hand on the radio yelling for the rest to slow down, while the other kept my F-250 on the road while bouncing through the rocks under hard braking. I kept waiting for the all too familiar hissing sound of a tire puncture, but it never came. Yokohama’s GEO-SHEILD 3-ply sidewall construction and HD-2 tread compound kept the tires from puncturing, and their notable cut and chip resistance prevented any major chunking or deterioration. 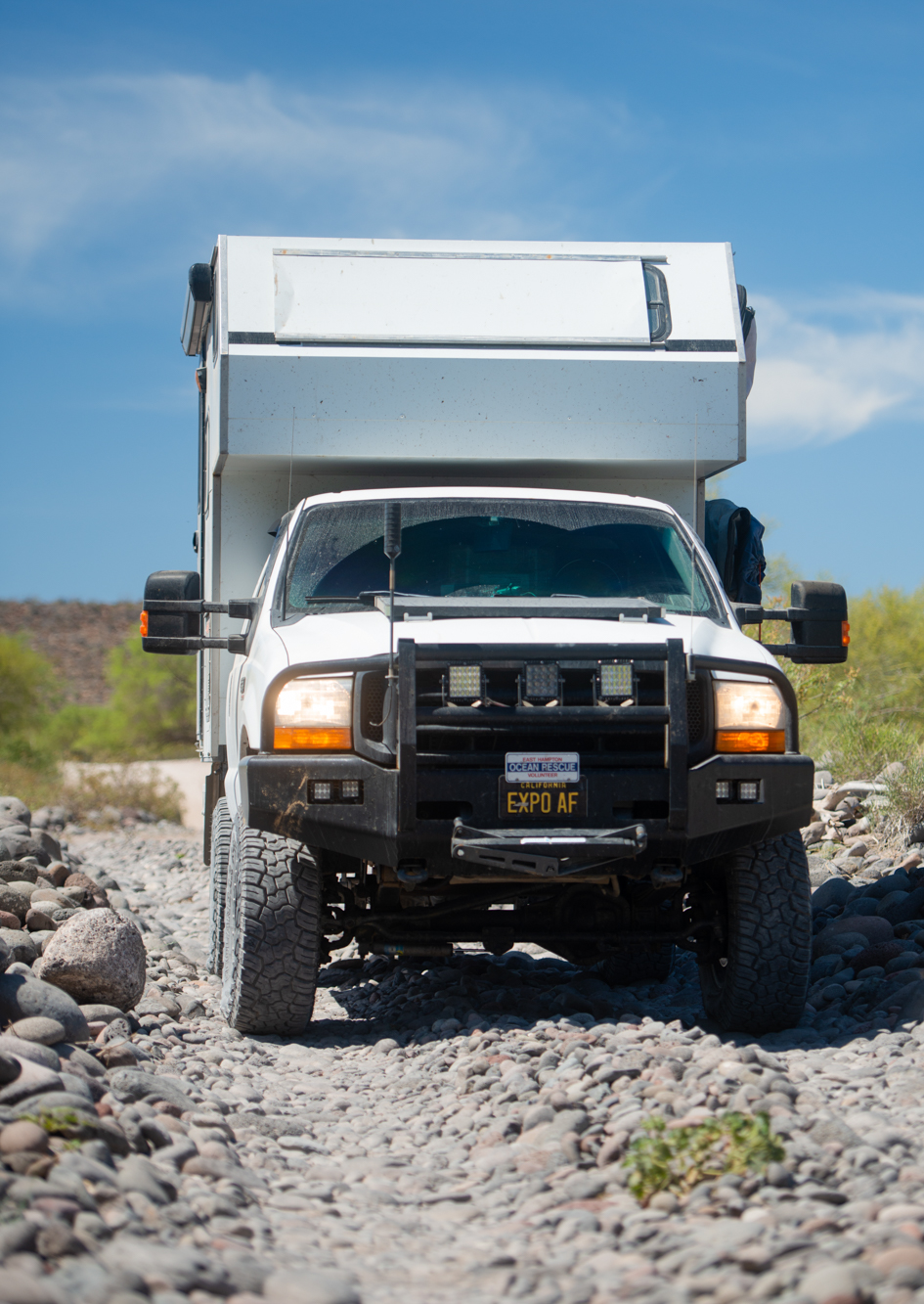 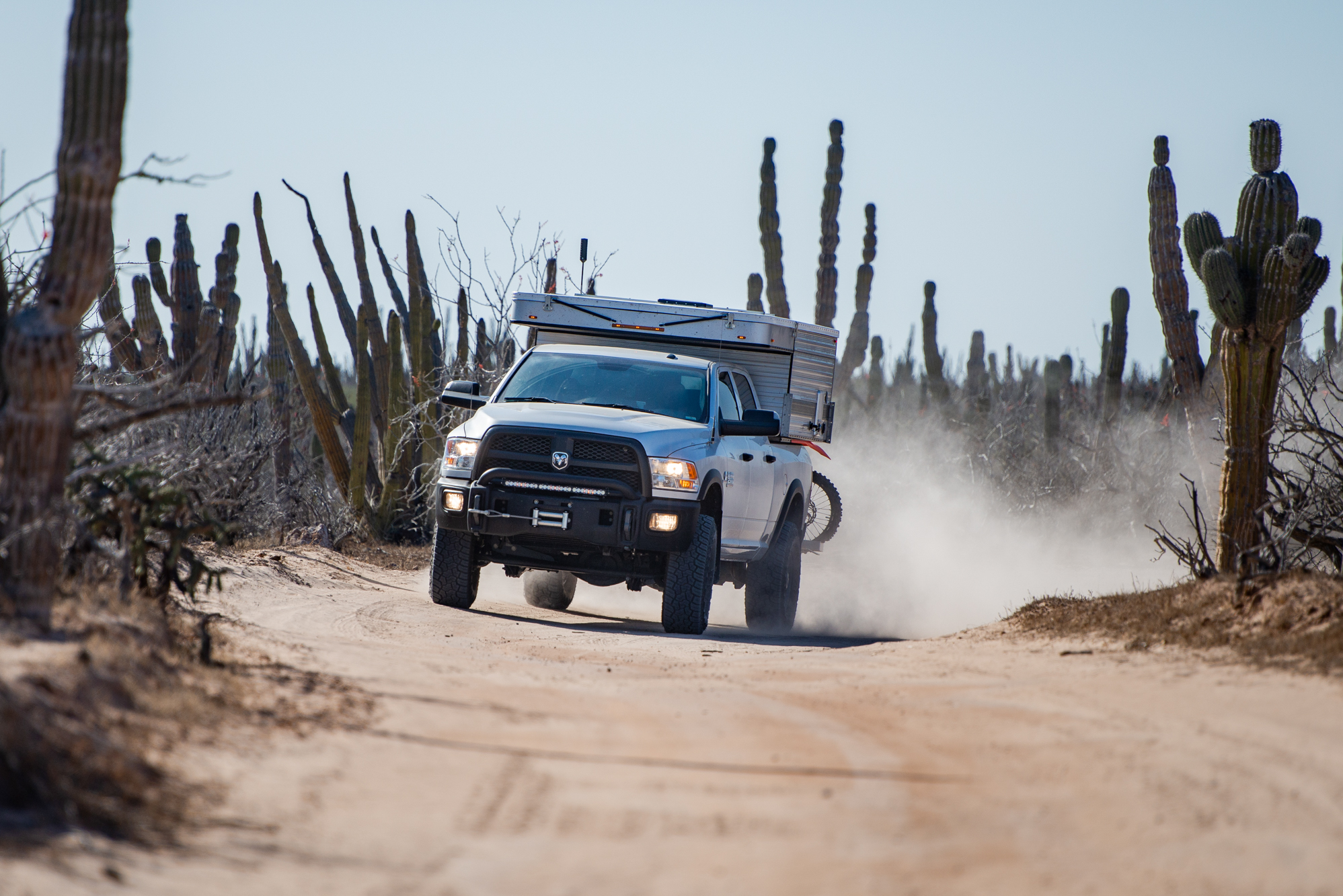 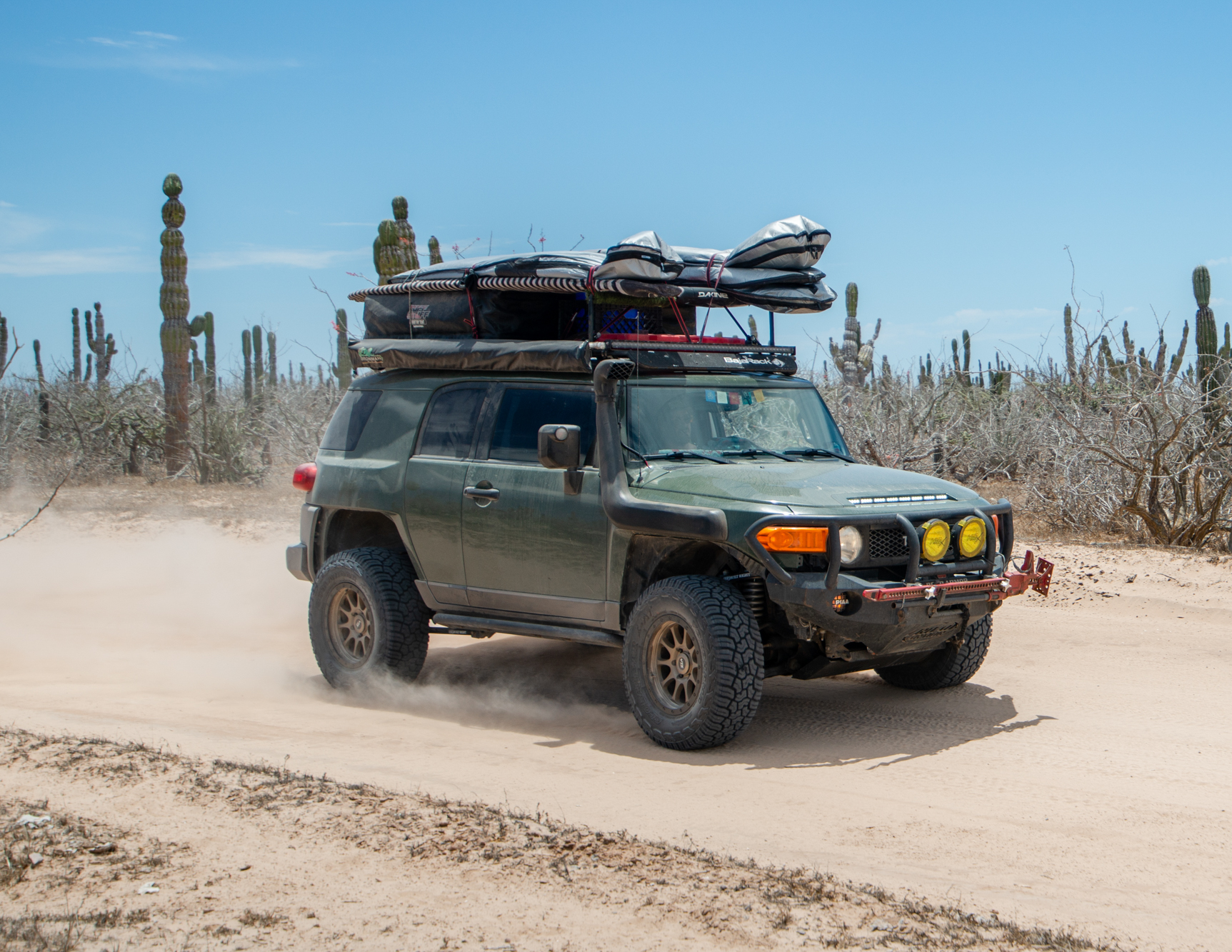 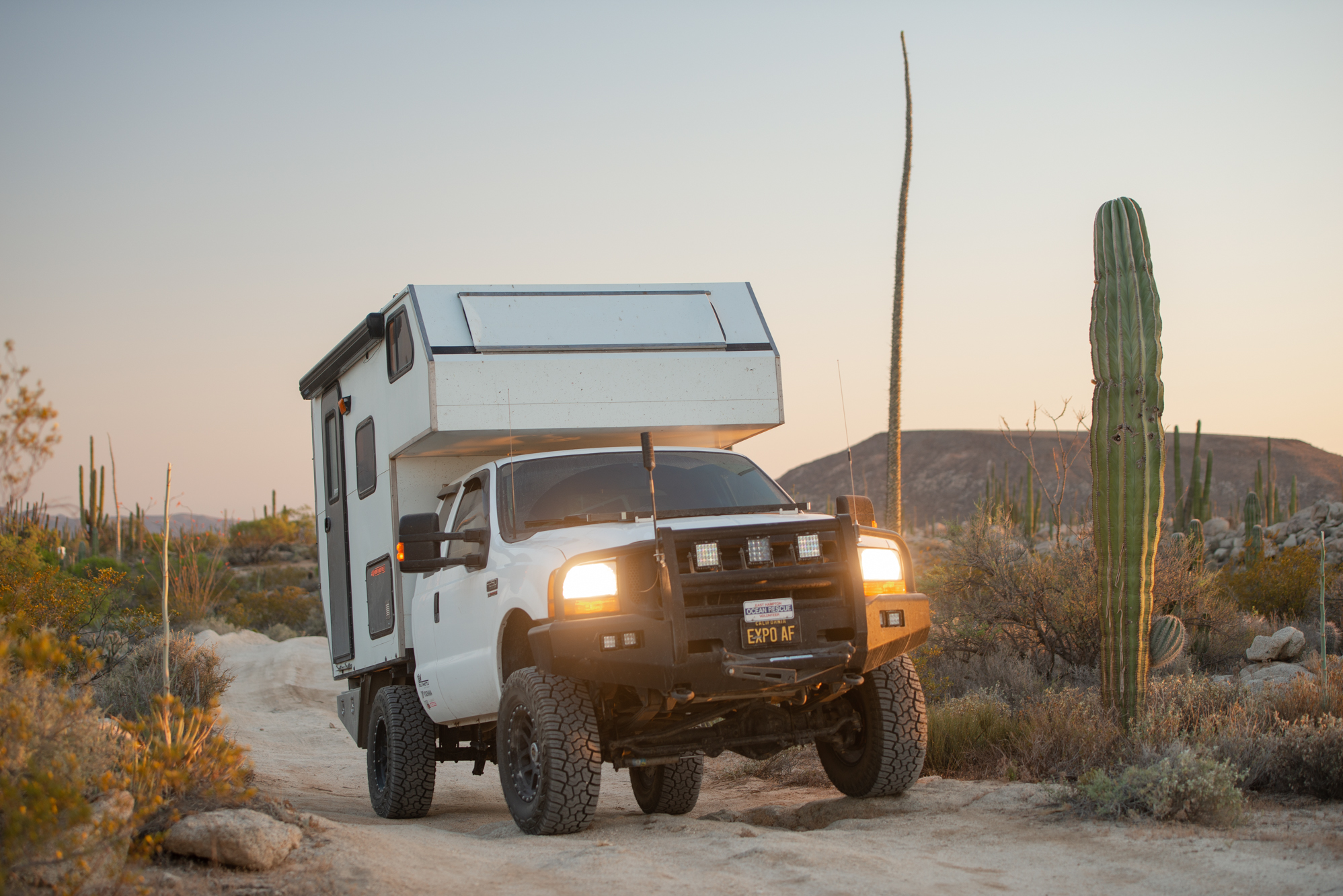 I don’t know if I could ever catch enough waves to be fully satisfied, but after spending a few weeks under the sun chasing swell, I was ready to get back into the States and climb in altitude to find cooler temperatures. Flagstaff, Arizona, was the destination, specifically, Overland Expo West, but there’s a lot to see between Baja and Arizona. Some of North America’s most iconic places to visit are in the Southwest, so I chose a couple of my favorites, and we set off, exchanging sandals and boardshorts for pants and boots as we left the coastline. 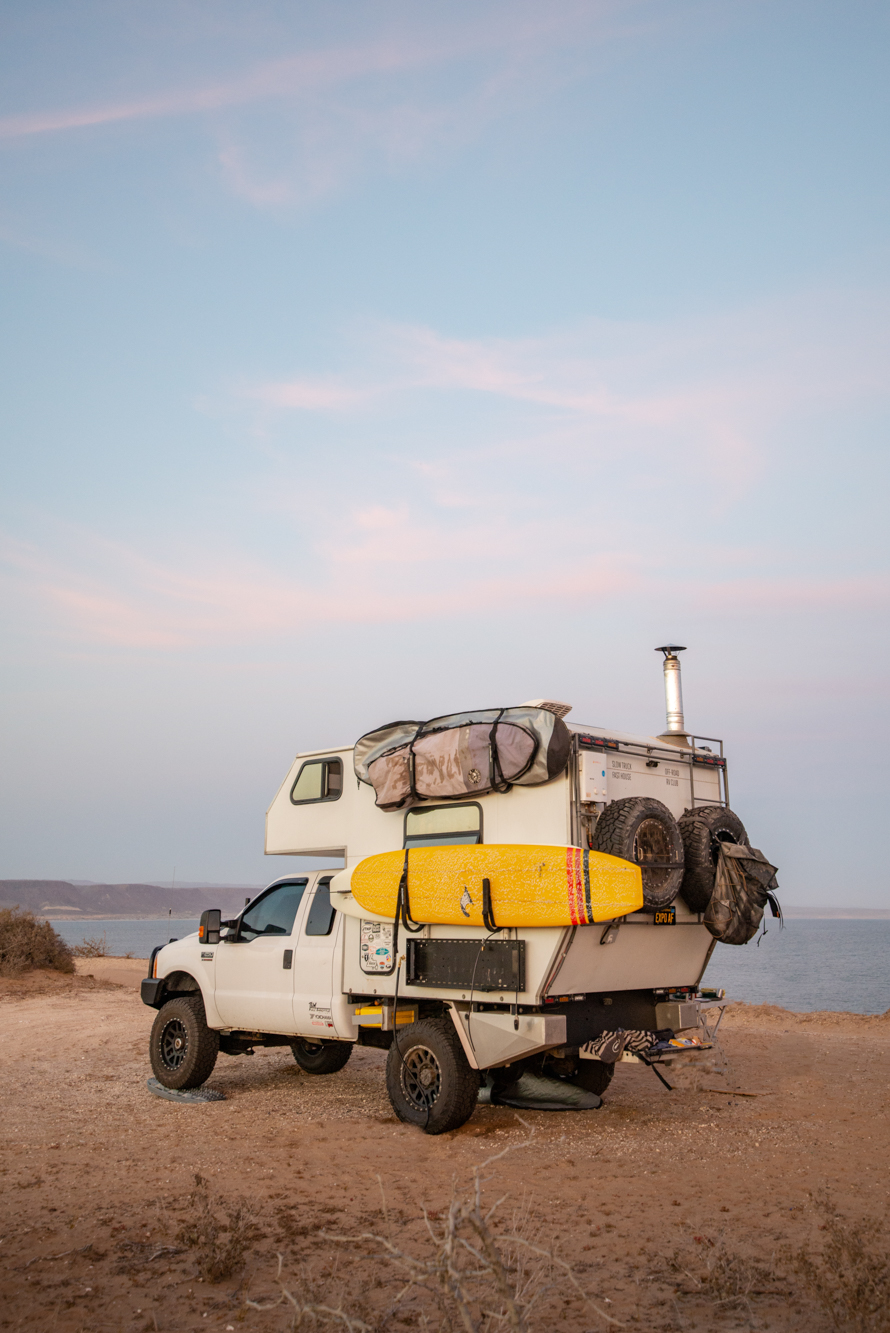 If you follow my Instagram, you might think I only drive on dirt, but honestly, I spend a lot of time on pavement, and this stretch from Mexico to Arizona was no exception. It gave me a chance to evaluate the X-AT’s road manners. I’m running a 35/12.5R18 128Q LR F tire on my Ford F-250, the heavier F rating (3,968 pounds per tire) is perfect for larger vehicles, especially ones that carry a large load or frequently tow. My truck weighs nearly 12,000 pounds when fully loaded; the F rating has helped my fuel mileage and stiffened up the boat feeling my truck previously had on the street. I was able to corner harder than most other vehicles in our caravan, mainly because of the tires, but the Hellwig sway bars and airbags don’t hurt. 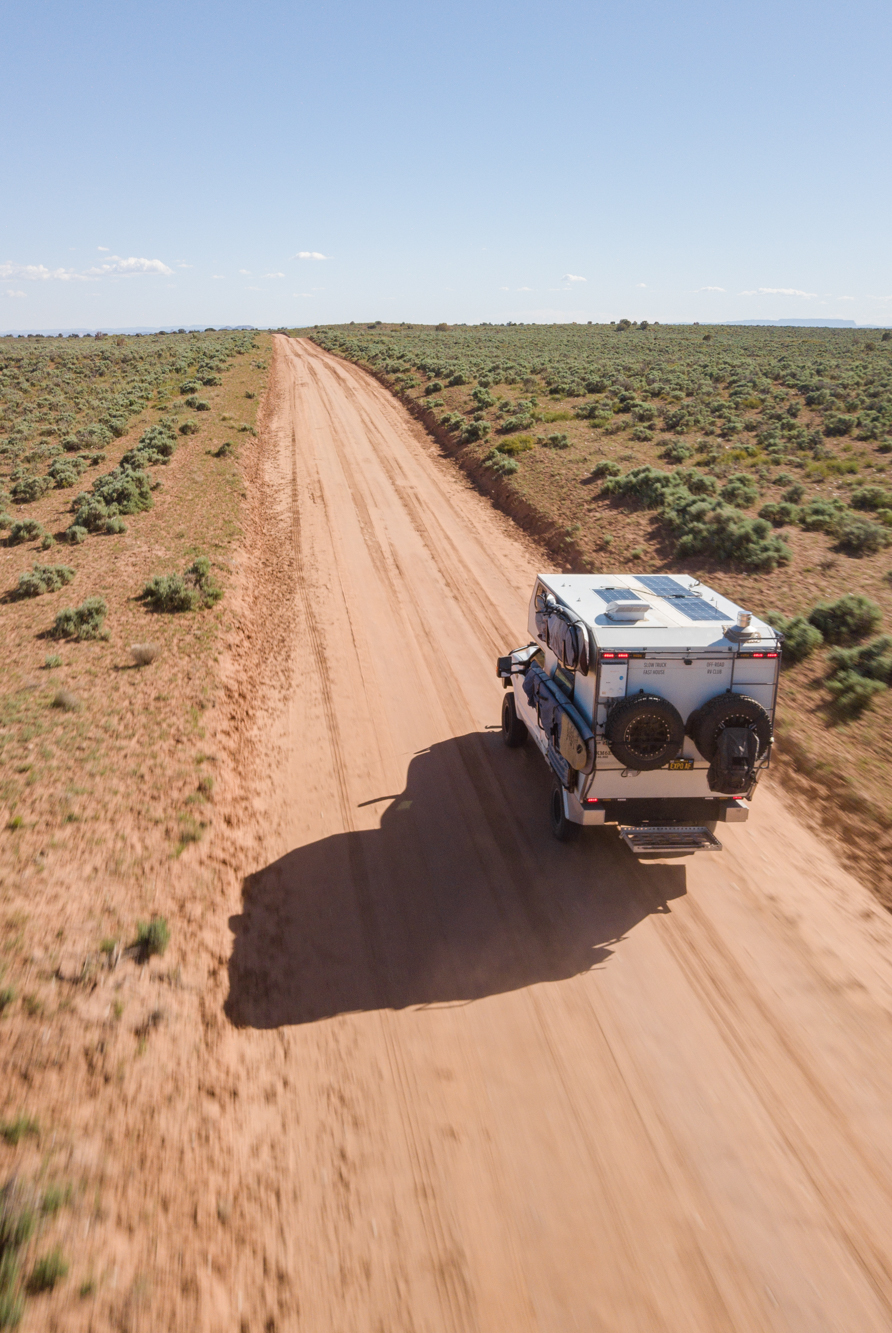 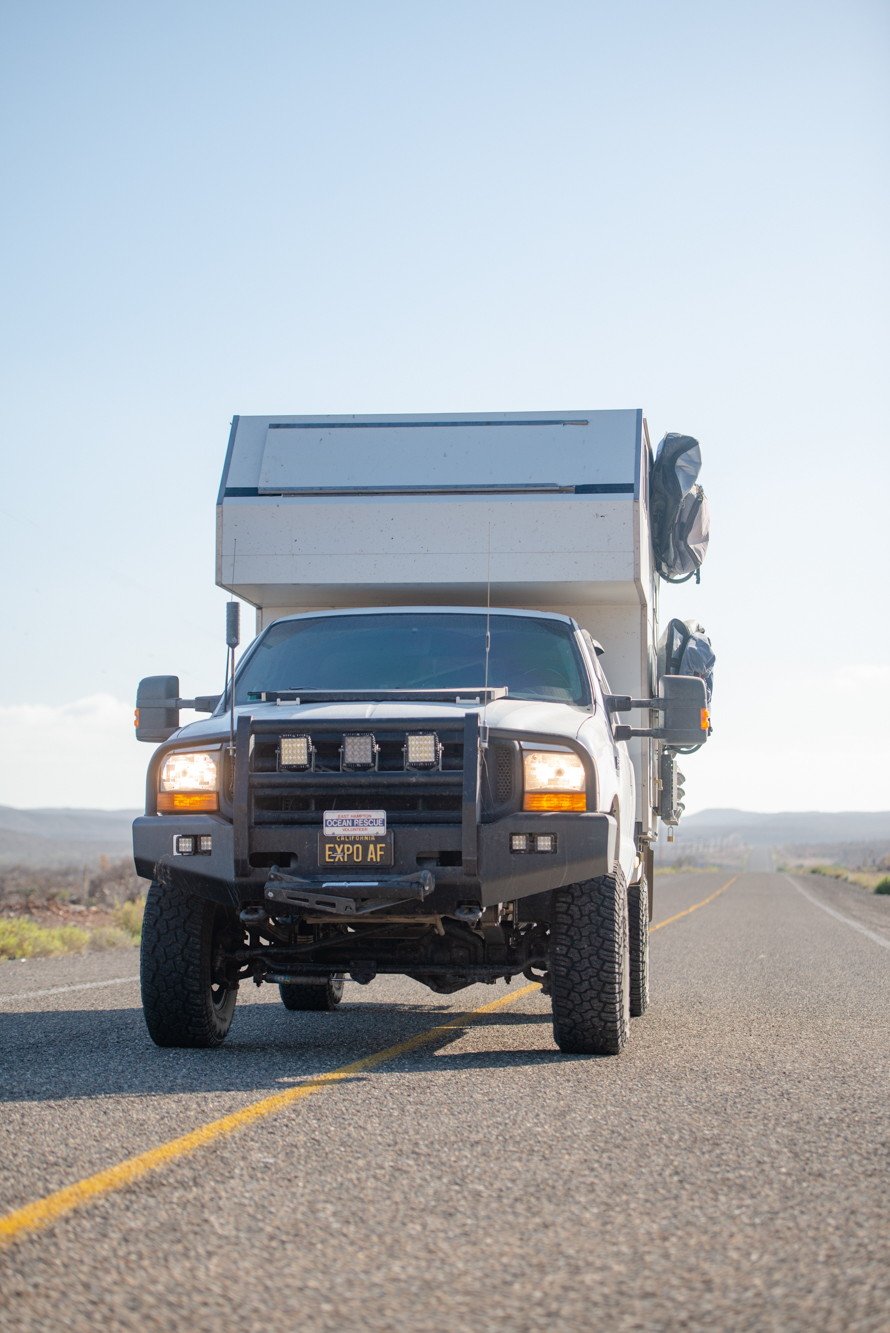 Zig-zag grooves reduce noise in the rubber which interrupt the airflow channels between the tread voids. This reduces the howling sound you’d typically receive from an aggressive tire, giving the Yokohama a respectable noise level settled between that of an M/T and a standard A/T. Tread life lands right about where you’d expect for a crossover tire as well, thanks to their HD-2 rubber compound. After nearly 7,000 miles on my set of X-ATs, they still look and drive like new. Of course, you don’t need to take my word for it, because Yokohama backs them up with a 45,000-mile tread-life warranty. 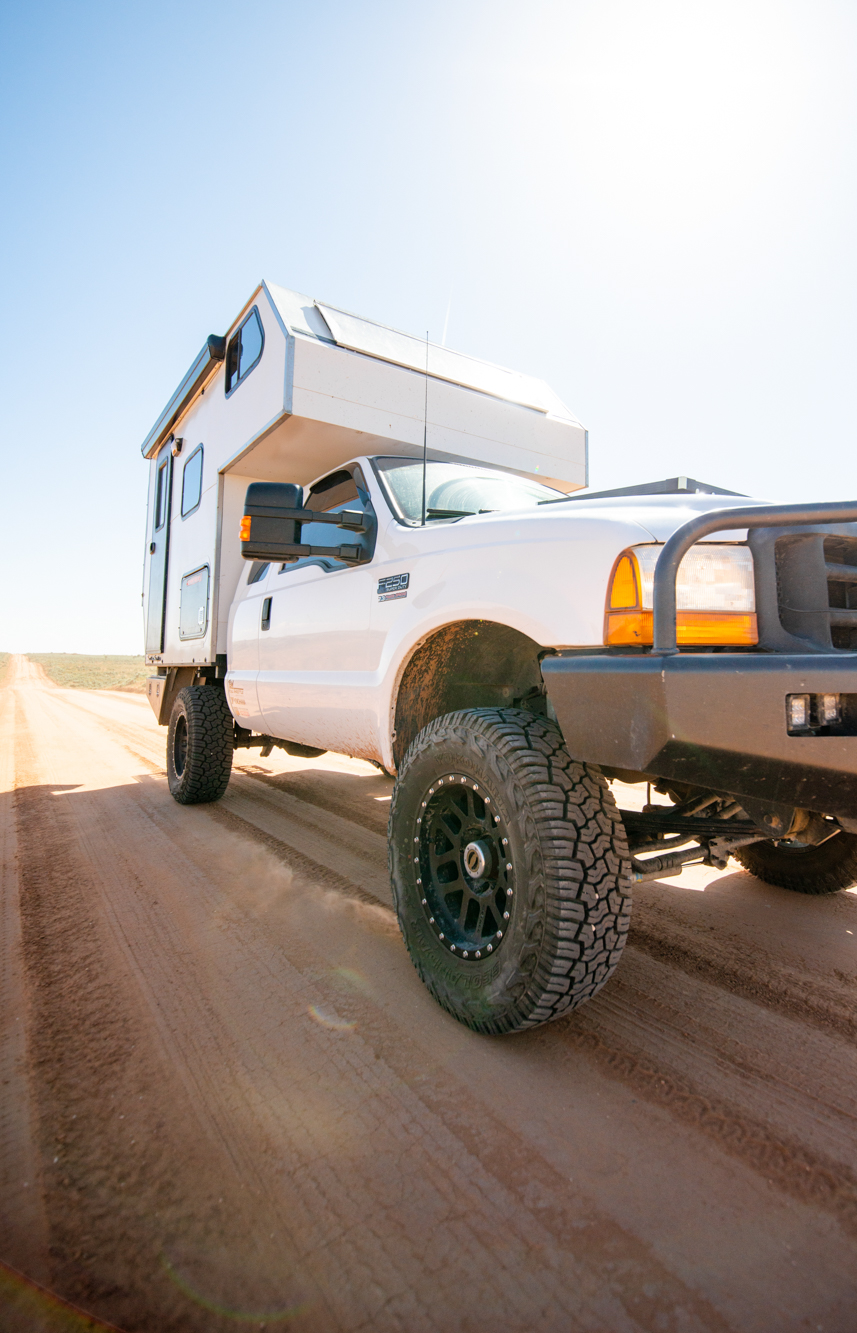 I was hoping to be able to test the Geolandar X-ATs in the snow while on this trip but sadly couldn’t find any. Matt Carter, from Off Grid Engineering, who was with the group down in Baja, drove on the X-ATs during a Colorado spring snowstorm while on the way home from the trip and said they performed great. Sipes and combination grooves on each tread block aid in traction on wet or snowy roads, and while the X-AT doesn’t carry the three-peak mountain snowflake rating, I suspect the tires will perform well in freezing conditions. I will hold on a verdict until the opportunity arises for me to test them myself. 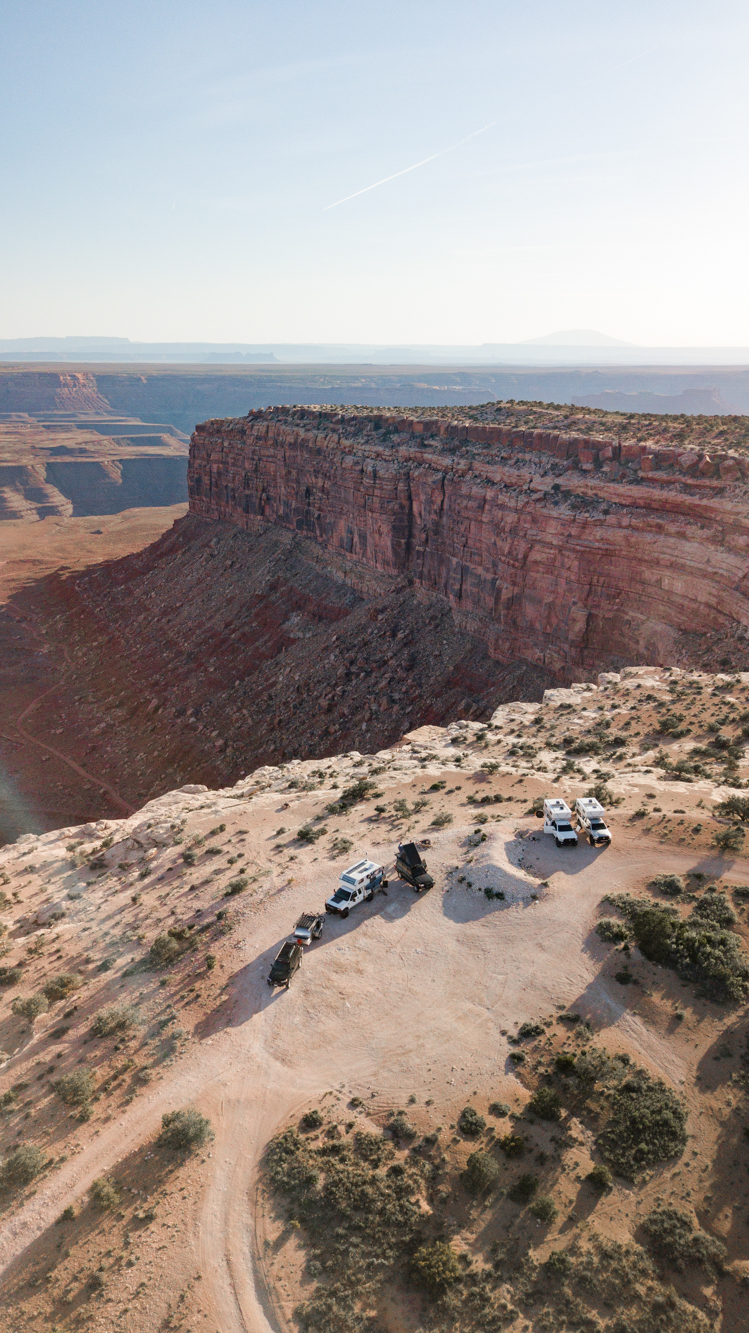 Okay, let’s be honest, I want my tires to look good on my vehicle. I ran the Yokohama Geolandar A/T G015s on my F-250 for a while, and I loved them for their street performance and long tread life, but there was one downside: they didn’t look that aggressive. Yes, I know its not all about looks, but if you’ve got the option, why not choose a tire that improves the look of your vehicle? That’s why my favorite thing about the X-AT is that it’s an all-terrain tire hidden inside of a mud terrain. I get the best of both worlds, aggressive styling and off-road capability, but mixed with comfortable road manners and long tread life. Yokohama even engineered it with a dual-sidewall design so you can pick which pattern fits your vehicle best. I’m planning on flipping the sidewalls of my tires about halfway through their lifespan, to mix things up a bit and change the look. Why not, right?

We finally made it to Flagstaff after two months on the road, and every one of us had fallen in love with the Yokohama Geolandar X-AT. I might only have 6,000 miles on my set, but I can tell you I don’t think I’ll run another tire for quite some time. They’re aggressive enough that I feel confident taking them down any trail but comfortable to hammer out long pavement days. The X-AT is my perfect mix between an all-terrain and mud-terrain tire, and ready to tackle anything you drive over.

Do Not Start Overlanding 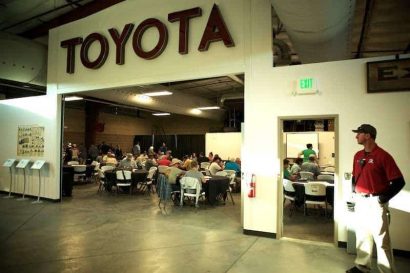 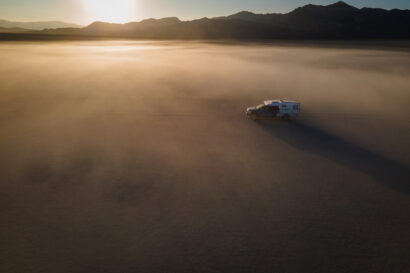 36-Hours of Adventure :: In Search of Terra Incognita 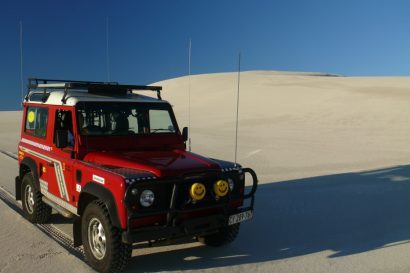