Our lives six months after saying heartfelt goodbyes in old Blighty – no longer concerned themselves with mainstream matters on which the average Brit might dwell: work, bills, making some imaginative weekend play before the cycle’s put on repeat. Our affairs now involved getting from A to B under our own steam – faring through foreign lands astride two wheels in often unpredictable conditions. Risk assessment, daily contingency plans and damage limitation feature high on the daily agenda. As well, on-the-road health, our welfare in the wilderness and staying sane with each other 24/7 while riding a rollercoaster of emotions. Budget management where every purchase is a ‘considered’ one from shampoo to sprockets; wear and tear on our gear – can I live with the four finger holes in my gloves or would another patch job using dental floss extend their life a little longer? It’s a two wheeled nomadic life, which for me – I love more than yesterday, less than tomorrow. 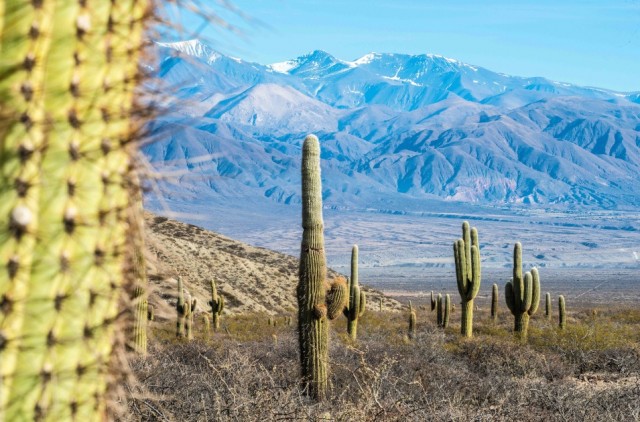 Salta on first impression was another biggish city screaming with traffic, noise and negligent road users. We spent a sweat-soaked hour ‘hostel shopping’ to accommodate our daily lodging demands – namely a cheap bed and somewhere secure for the wheels. Despite the pretty plaza lined with colonial architecture I had still wanted to make a sharp exit on arrival.

Ruta 9 took us out of Salta onto a three to four-metre wide road, not a single track but split into two lanes for oncoming traffic. Narrow was an understatement although we cared little and less; we were riding through 30 degrees Celsius delight. The slender road snaked through a sub-tropical rainforest – it felt like we were following the frilly hem of a rah-rah skirt as we meandered through a multitude of tight twisties. All I could hear was the song of freedom that the wind sang as I fell into a pendular rhythm to its melodic tune.

There were butterflies fluttering past my face, a crested caracara lunching on a lizard and a sparkling lake tucked off the main drag. We parked under the spreading arms of an ancient tree making a perfect picnic spot for our midday munch. It was not always but that day was a charmed one. 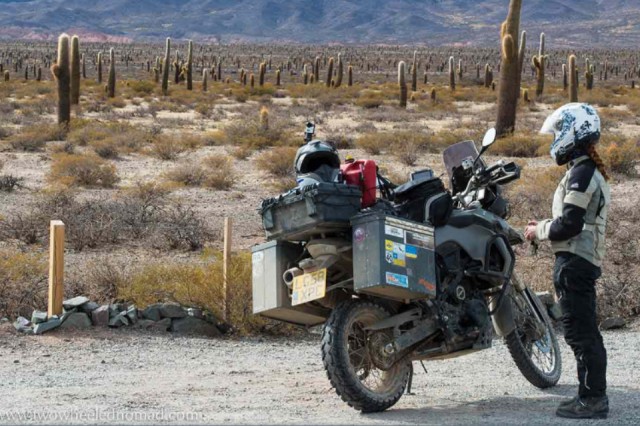 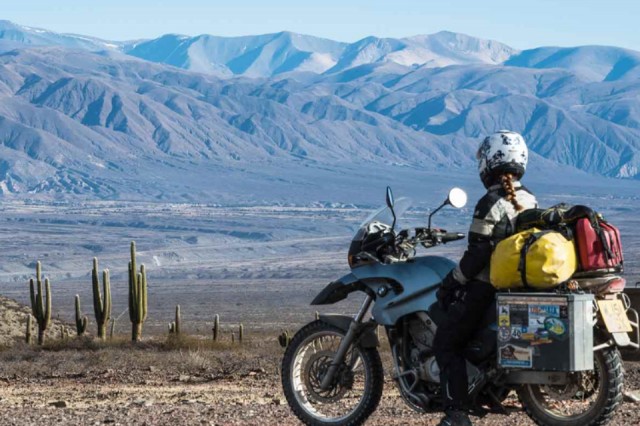 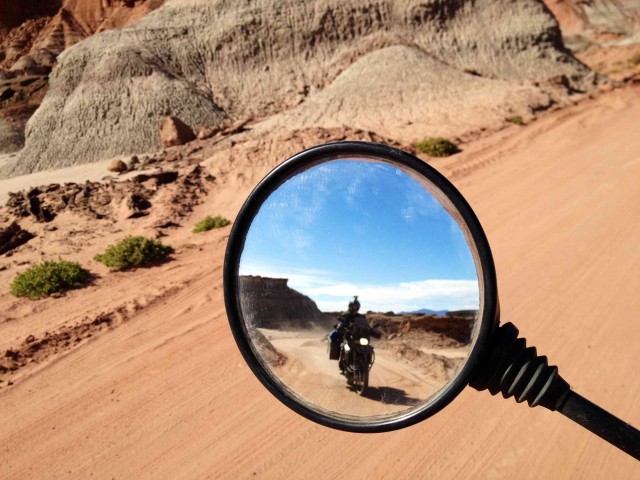 Purmamarca we pronounced as ‘permanent marker’ was no broader than the tip of one. As a flyspeck town, it sat against Cerro de los Siete Colores – the Hill of Seven Colours, which can only be described as a jagged rock formation resembling the marzipan fantasy of an over-zealous cake baker. The village makes its coin by the congruent rainbow of colours interlaced through woven goods and handicrafts on offer. You could buy anything from a hat, poncho and slippers with a matching boho handbag. A straggle of ochre adobe houses and age-old algarrobo trees next to a bijou 17th century church surrounded the hubbub of the central plaza. 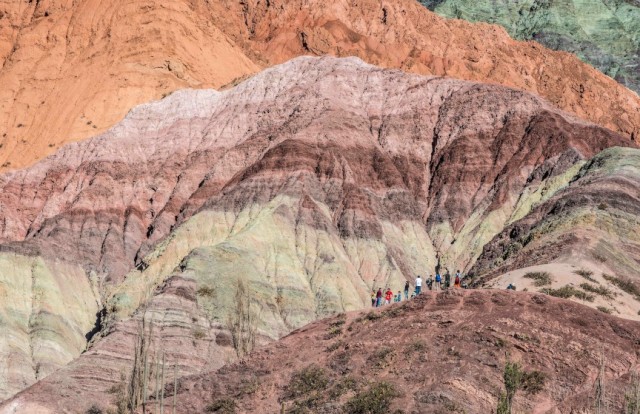 The place was bustling with hordes of holiday-makers, although we found our own personal snuggery for the night away from the droves. Ensconced within the heart of the seven coloured hill, we chanced upon a local guy whose beret barely covered his shock of black hair. He was somewhere in his fifties, placidly looked up with enquiring eyes while tending his four horses. This guy was unhurried in and unruffled by life. Some revealing chitchat later, we were cooking on the stove, sharing our coffee with Pedro and his two young apprentices with permission to stay over on private land. We laid out only the sleeping bags for a starry night’s sleep. Our wheels had won us the jackpot, yet again.

My ears the next morning popped to the sound of corn kernels bursting open. We surpassed 4,000 metres. It wasn’t Everest although I was still light headed and short of breath between jumping in and out of the saddle to take pictures. The day ended somewhere off ruta 9 in the region of Jujuy at a spit and sawdust settlement, Susques. We joined the road workers at an unmarked café and chowed down a meal for less than three dollars. Bargain beaut.

Our day from Susques on ruta 52 had started at a raw -7 degrees. In fact the morning saw our coldest day yet in the coolest of sunshine. Moreover we were riding at around 50 miles per hour, which further lowered the unforgiving temperature courtesy of the wind chill. The day previous, we’d been slathering on sun cream, wearing the minimal of clothing. I simply didn’t think ahead and dressed according to balmy breezes and a warm window of sun.

I confess, after an hour or two riding in sub-zero temperatures, I was running low on heat reserves. Wearing a face etched in anguish, I was cold as ice clad in goose bumps, every breath laboured. My hands were turning a purply shade of blue with a white band across my knuckles and joints where blood had taken its leave. I was starting to shiver uncontrollably while trying to fight my inner ‘ginger whinger’ rearing her ugly head. It was no good. I pulled over stiff as stone to warm my fingers on my motorcycle’s exhaust, but not before letting myself wallow in a pitiful but cathartic cry. 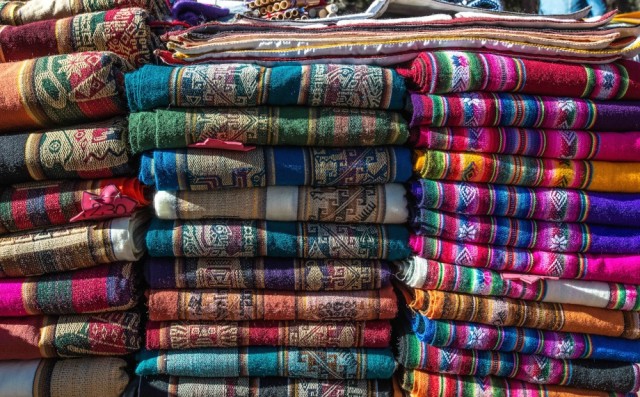 My affinity with the climbing altitude left much and more to be desired; I guess peaking our ride at 4,800 metres was pretty high, almost on a par to Everest’s base camp. My heart was punching out every heartbeat, I felt fatigued and my skull was pounding in what felt like an expanding head. Get this helmet off! My weep was worth it. With the mini-thunderstorm on my face over, I glugged down my grogginess with water and drank in the vista before me.

The low sandy hills were all soft lines and gentle curves in calming hues of dusky pink, salmon and peach. They sat serenely on the outskirts beneath a perfect blue sky unblemished by not a whisper of cloud. It was a visual banquet that seemed to keep further brushes with altitude sickness or hypothermic symptoms at bay – although wriggling into additional layers on which I could quickly lay my hands helped.

We re-entered Chile for the umpteenth time on ruta 27, destination: San Pedro de Atacama. The day’s misadventure had passed and it gradually got warmer as the afternoon wore on.

Rolling into San Pedro de Atacama was a whopping 30 degrees higher than the morning’s rude start. I looked ahead to the oasis town but on my left spotted volcano Lickancabur – not too difficult to miss at just under 6,000 metres – which if carved down the middle, one half belonged to Chile the other Bolivia. The town itself was a bohemian jewel in the desert. Geared up for the day-tripper yes but it still retained something special and pocket-sized about the place. I liked it instantly. 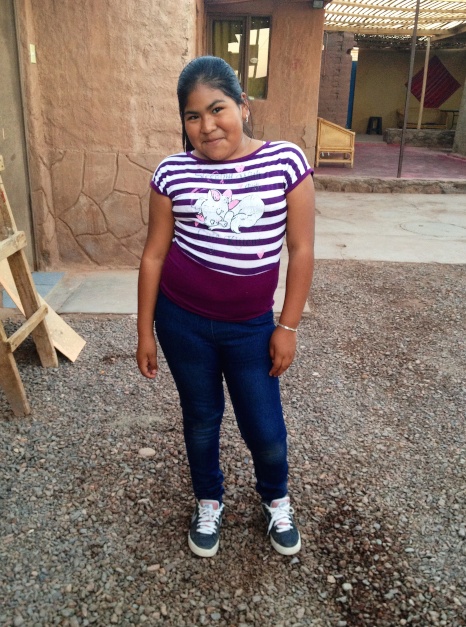 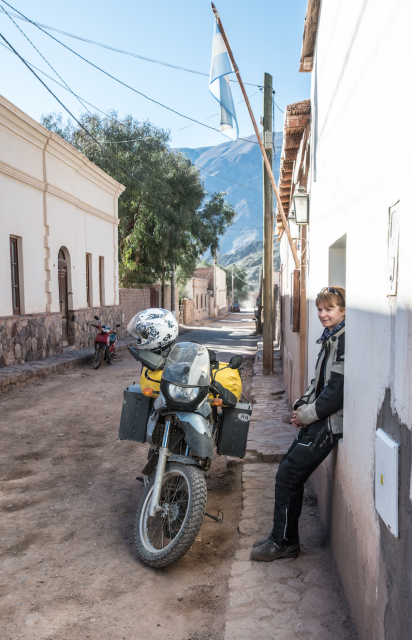 Fatima warmly greeted us on arrival at Hostel Tuygasto. What a sweet natured, well-informed and helpful lady. Not comfortable until she had: given me a tour of the premises, ensuring I knew how the oven worked, the best way to manage the tricky door lock and the best setting from the hot shower tap, was she at ease. She thanked me for early payment with a receipt, gestured if I had any questions waiting with patient eyes for my response and resumed her cleaning duties around the hostel’s courtyard. I couldn’t remember the last time I’d been accorded with such courtesies. She was nine years old! I could not have been more astonished if John Lennon had come along juggling lemon pies. I adored children like her, she melted my heart in half a beat and it didn’t take more than a thimble of sense to realise why – her father exuded a gentle bonhomie about a happy aura as well.

You can follow Lisa Morris’ offbeat travel tales at www.twowheelednomad.com