Opening image is from a movie production, closed course. We always recommend wearing a helmet while riding a motorcycle, but also acknowledge that helmet laws vary by state and country.

There is such joy in simplicity, distilling a pursuit down to its elemental components. I have tested quite a few adventure bikes through the years, and they are nearly all technology wonders, but I never quite had that fundamental connection until I tried out a Moto Guzzi V7. Even testing it was unexpected, as I received a call from their PR team and a suggestion that “you really need to ride the bike.” I took the V7 Special on a long-term loan and started riding it daily. By the time the loan period was over, I had called up their offices and sheepishly asked how much it would cost not to return the bike and send them a check instead. Curiously, this is the only demo vehicle I have ever been inspired to purchase.

My initial impressions of the bike were mostly biased by my love for it, which deserves some explanation. Principally, I believe a motorcycle should inspire some emotion from the rider or at least meaningful admiration. I was taken by the beautiful black and orange tank, the shudder of the air-cooled twin, and the (almost) complete lack of electronics. It does have fuel injection (a bonus) but lacks ABS and any other gadgetry. Being air-cooled, it has been 100 percent reliable, and my only repair has been to the final drive seal, likely caused by my riding it in the dirt. For the 750cc twin, the power is modest at 50 horsepower @ 6,500 rpm, but the lower output number has never bothered me. It feels fully adequate and maintains highway speeds without a struggle. If anything, I would want a higher redline and an additional gear, both of which have been resolved in later models. After years of riding the V7, I still do not have any notable criticisms, as any gripes are easily held within the context of its strengths and low purchase price.

Keeping in the spirit of simplicity, I kept the bike stock for quite some time, using it for daily riding duties, runs to the gym or the coffee shop, and burns along Northern Arizona’s famous Highway 89, which conveniently runs next to the Overland Journal offices. With time, I started riding it farther afield. After a few dirt trails in Sedona, I knew backcountry modifications were in order. The first goal was to install a high-clearance scrambler exhaust, which had just become available from Arrow. This stainless steel unit is a two into one, which reduces weight and significantly improves ground clearance. The downside is the loss of one of the luggage racks, but it proved worthwhile. I was also impressed that it did not impart any noticeable heat against the thigh or calf.

With the stylish new exhaust mounted, it was time for some improved traction, which came from slightly oversized Heidenau K60 Scout tires. They are significantly more aggressive than the stock rubber but have proven to be excellent on the paved curves and dirt tracks. The V7 Special benefits from wire wheels and legendary robustness overall, so the process of “scramblerizing” the V7 actually works. This is not a dirt bike, but I do like to explore on a whim, so these tires were perfect.

After a few trails and longer trips, I found more minor changes were needed, like lower and wider Knight Design pegs, complete with a machined texture to improve grip on my boots. I also installed adjustable CNC aluminum levers that are shorter and have better ergonomics (and durability) for the dirt. The one project I considered but never fabricated was a skid plate for the aluminum-finned oil pan. I may still make one in the future. 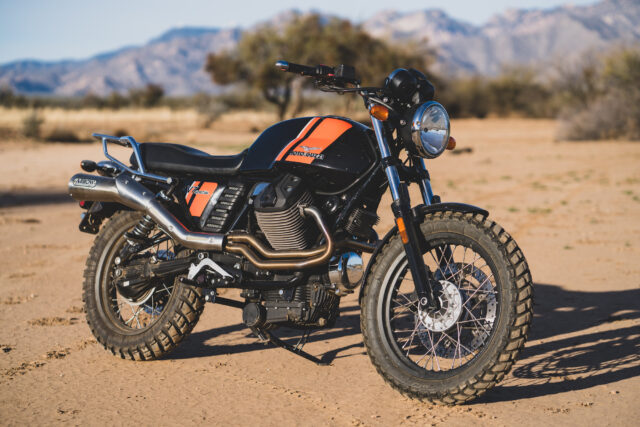 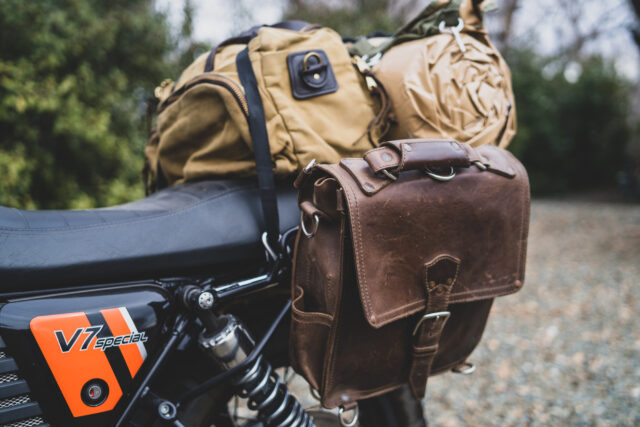 To address long-distance travel, I have a windscreen, and a large tail rack, both options with the V7 Special model. The tail rack is critical for hauling camping equipment, as I lost the use of the right-side pannier mount to the new exhaust. For the left-side pannier mount, I fabricated an adapter using the factory nylon luggage, installing the quick-release onto a Saddleback Leather Co. briefcase, which works ideally for both work commuting and travel duties. There is no notable weatherproofing for this arrangement, so I bring along a rollable waterproof cover that protects the leather in bad weather. My additional luggage includes up to two Filson canvas bags on the top rack and even a small rollable swag (bedroll) for nights in the mountains.

I was careful to keep modifications to a minimum and used this project as an exercise in slowing down, bringing less, and just enjoying the straightforwardness of something far more analog. The V7 has been impressive in its reliability, starting every time, and enduring long highway trips and occasional dirt forays. The shaft drive adds to the comfort, as does the well-padded seat, but this is no iron butt award winner. Moto Guzzi did such a thoughtful job with this model, and it has been a pleasure to own for nearly six years. With technology advancing at such a fast pace and everything getting more expensive and complicated, I have taken great satisfaction from the knowledge that less—with a dash of style—can often be more.