It’s an expansive tract of land, roughly equivalent in length to the West Coast of the United States, but with countless roads that to this day remain unmapped and infrequently traveled. Like many deserts, it’s a place the earth wants for itself. The sense of isolation and beauty Baja offers its visitors is something that once tasted is thirsted for. Due to its vast and unspoiled landscapes, it can feel outside of time or lost to it, but it is set within it and changing. While many of its secrets are held close, for fear of turning it into yet another paradise lost, it faces the same challenges of any wild place. But perhaps surprisingly, overland tourism may be crucial to keeping Baja as it is. 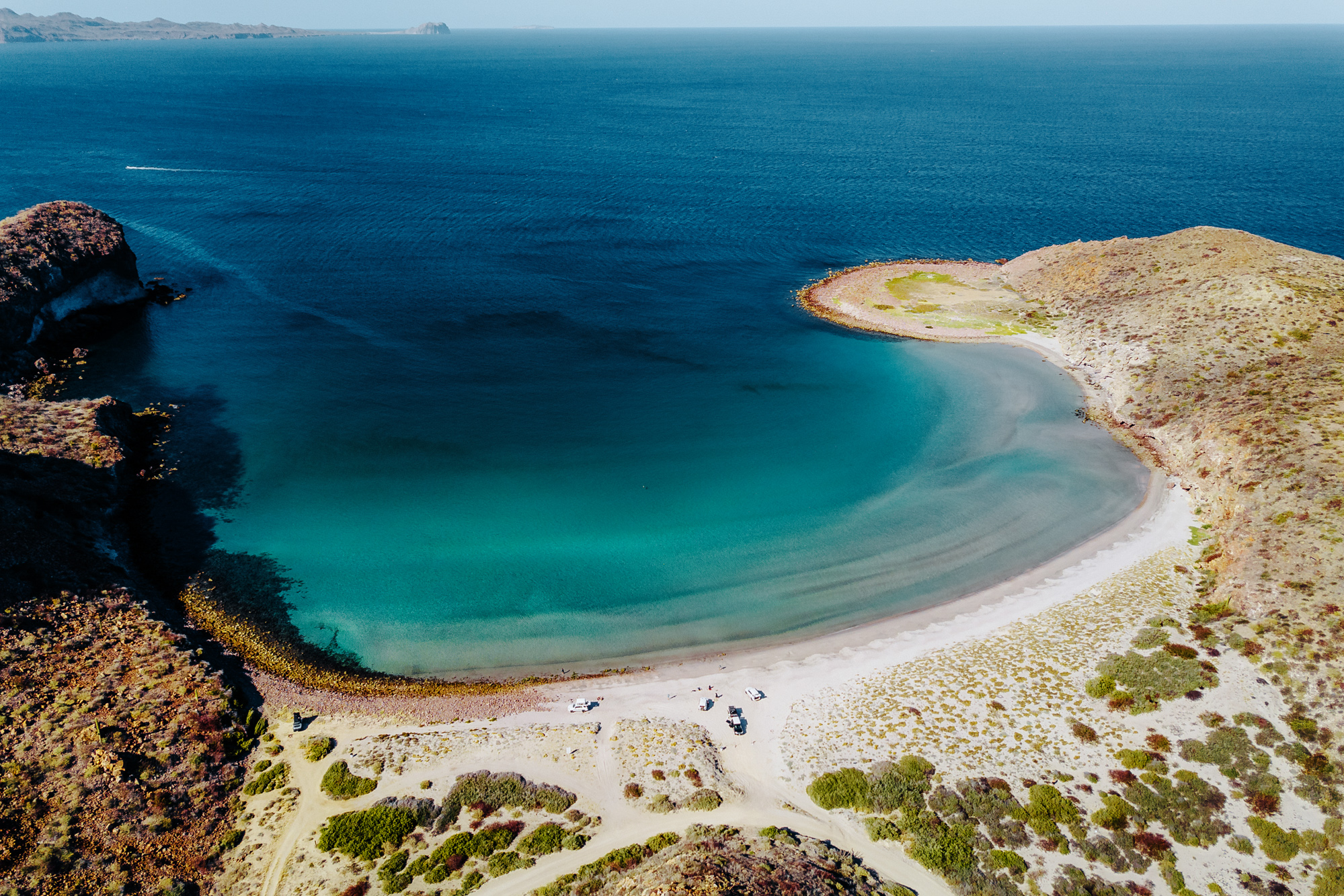 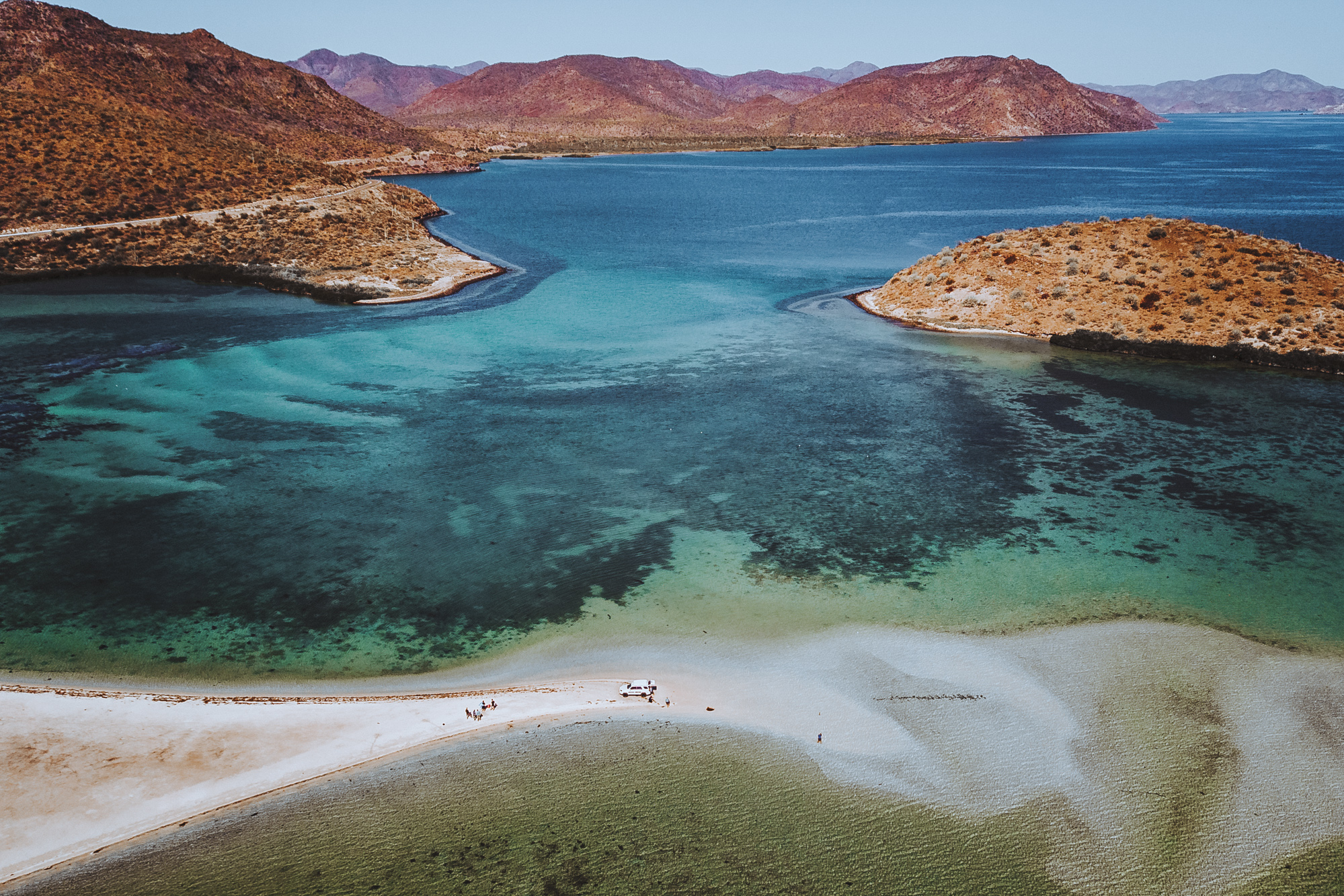 While more and more Americans visit Mexico each year, despite the politically polarized and at times hyperbolic description of its dangers, few travel the remote and lesser known areas found between Tijuana and Cabo San Lucas. Places that would otherwise be overrun with national park visitors in the States are here enjoyed in relative peace and seem to be at an early stage of appreciation and not yet loved to death. It’s a California before it became what we now know it to be: Joshua Tree before Instagram. And due in part to the challenges of accessing its country, it is a land seemingly gifted to overland travelers. 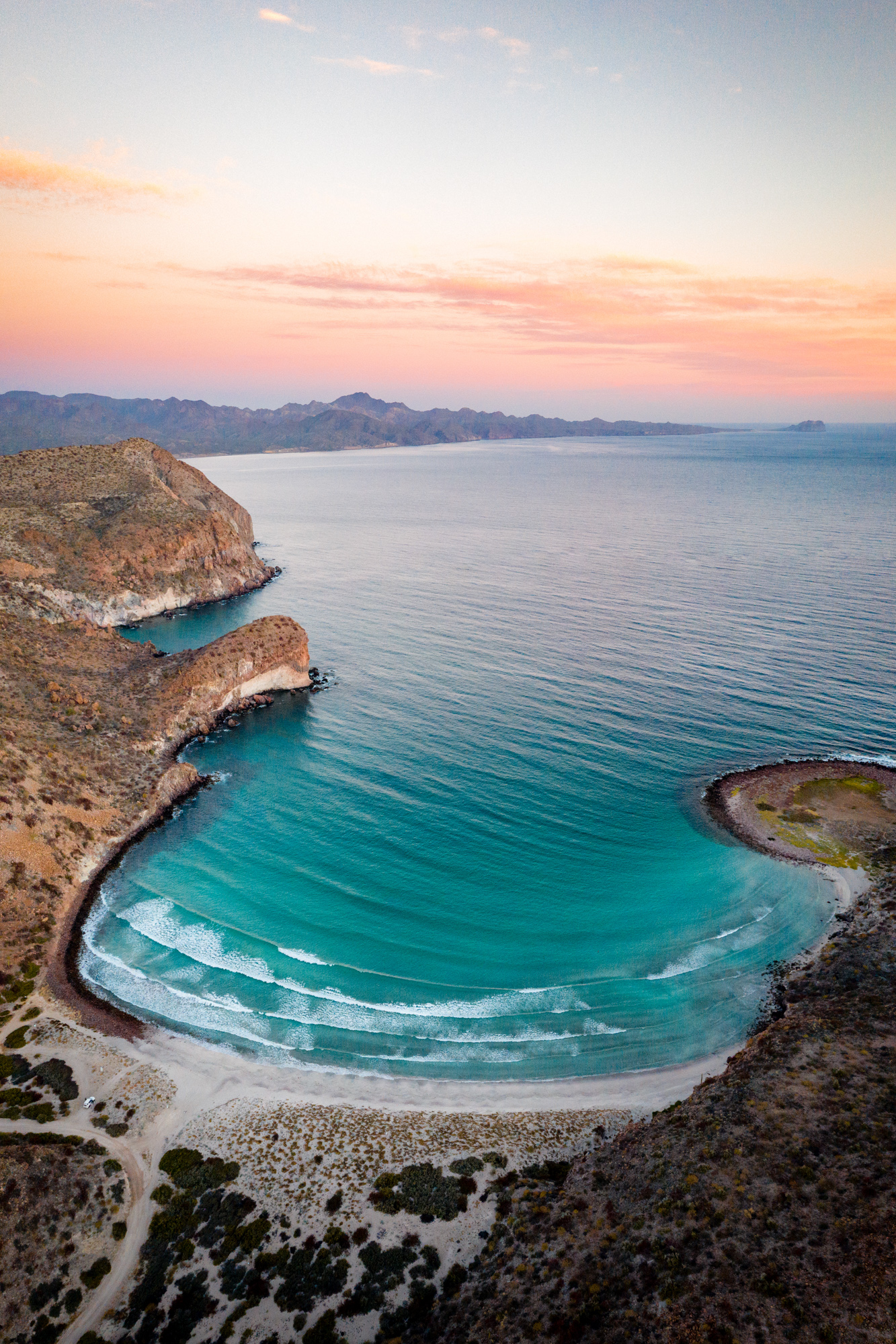 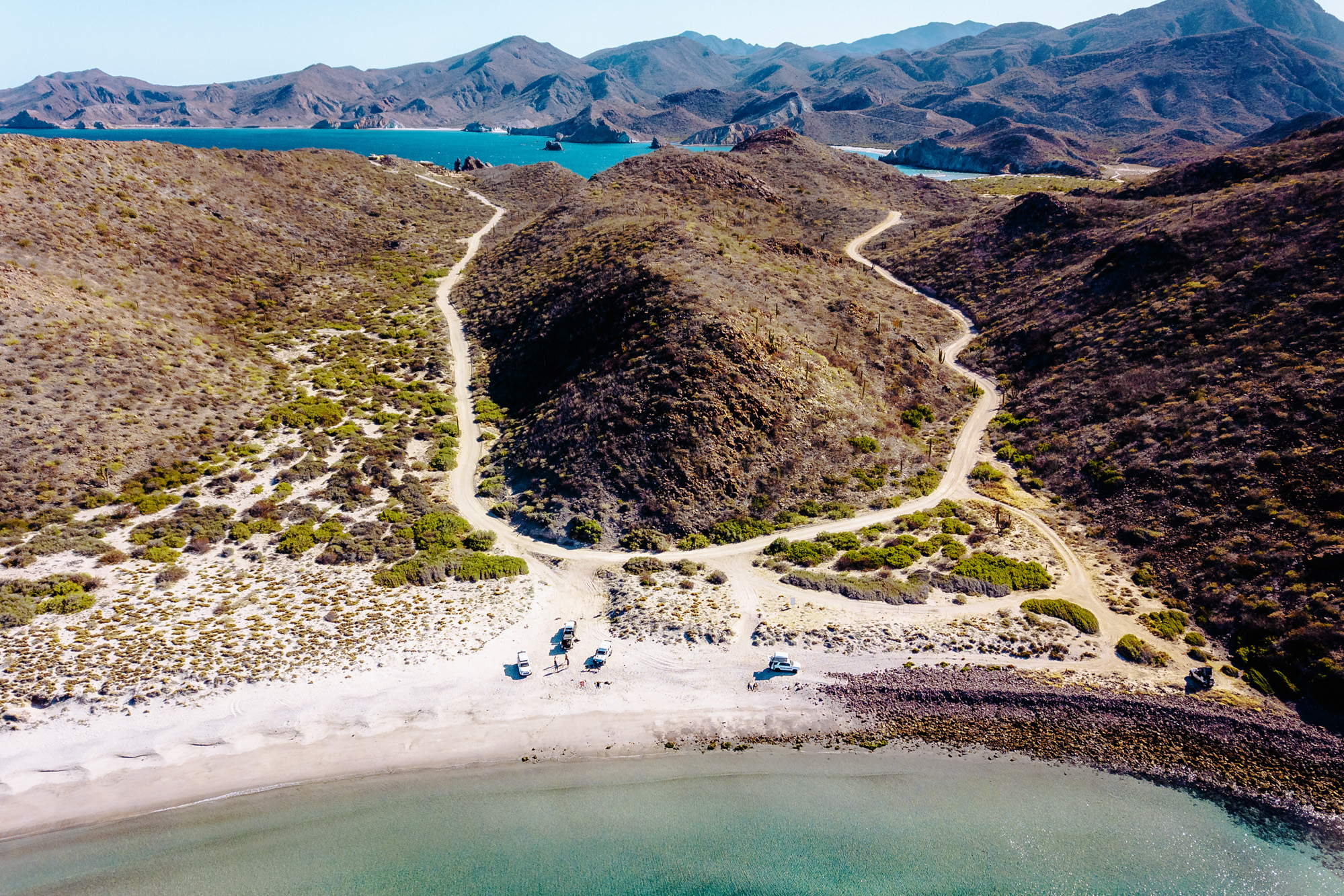 As guides with Pacific Overlander, a small overland rental outfit and tour provider in California, we had the unique pleasure of knowing that we would be sharing one of our favorite places on Earth with our guests. Before departing for our trip down the peninsula, we met on the San Diego waterfront for introductions and a brief orientation on the adventure we were about to undertake: 8 days of travel between the Pacific Ocean and Sea of Cortez en route to our final stop in the quiet coastal town of Loreto. We would be traveling in a caravan with a Land Cruiser 200 as our guide vehicle and 4Runners and Jeeps in pursuit. 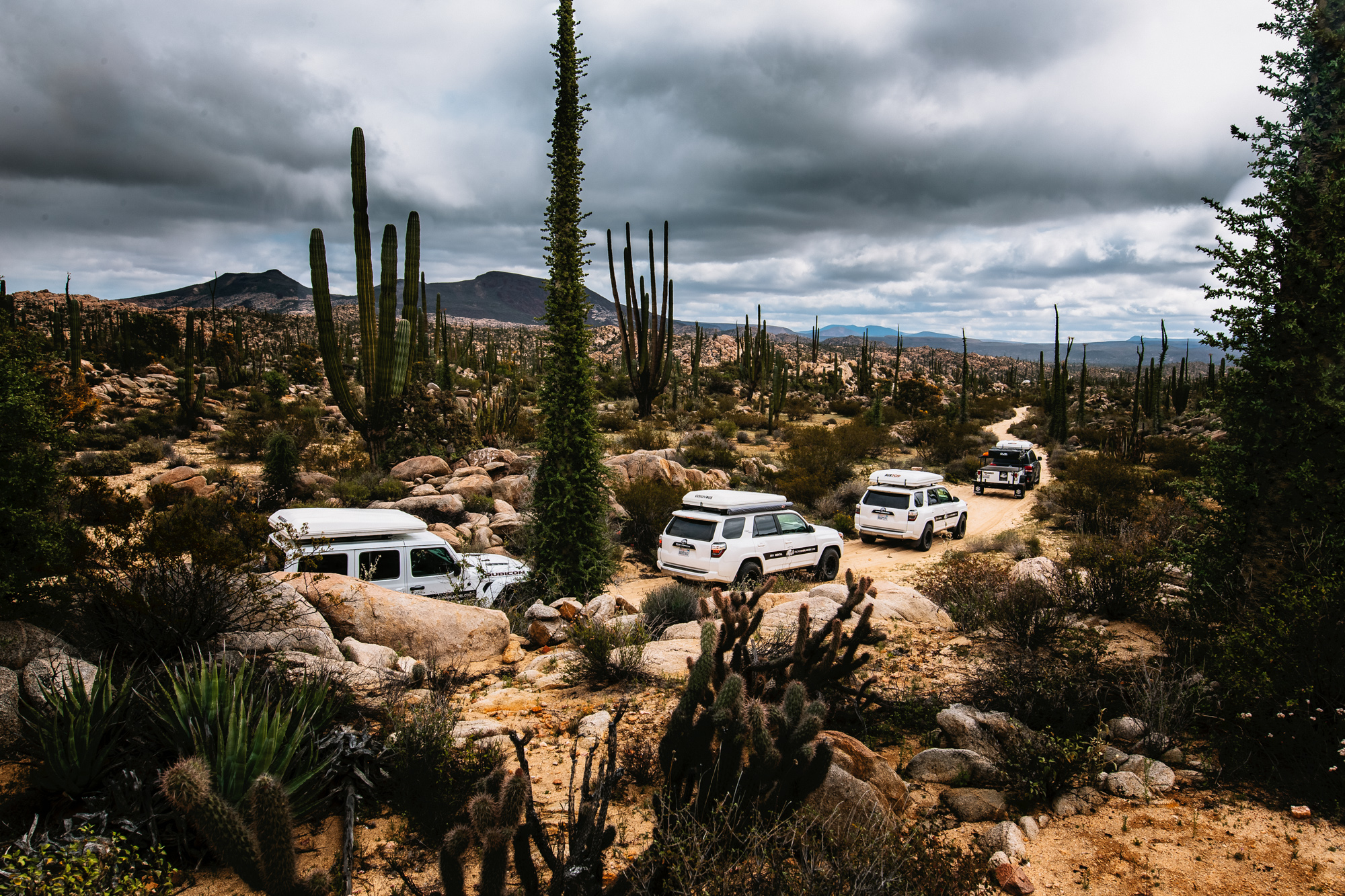 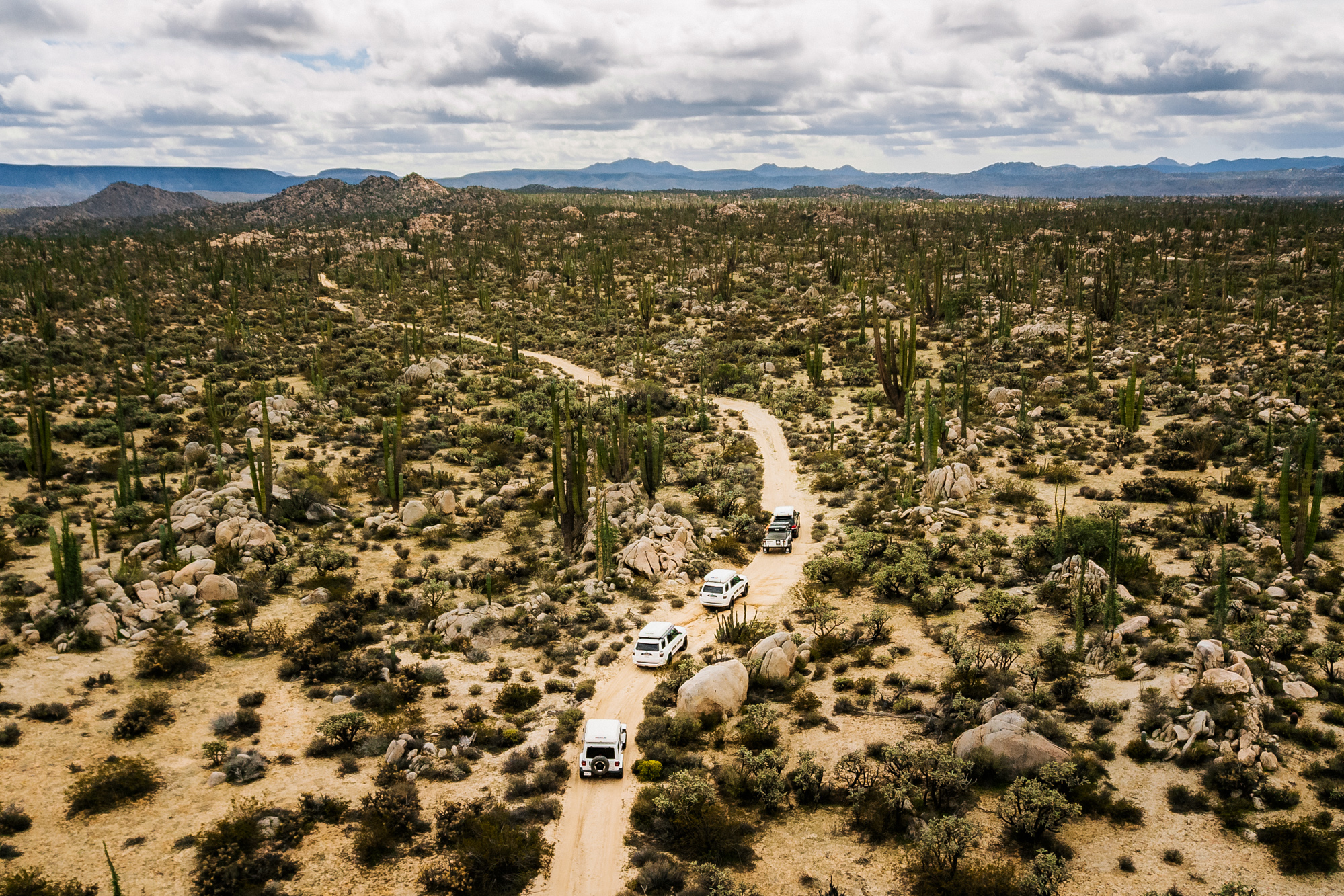 We were joined by guests from Bolt Travel, a company that recently launched with a vision to offer its members access to unique group travel experiences, as well as the team from Architec Apparel, a travel-inspired clothing company. A collective of Americans from both the East and West Coasts, they came along for the promise of time in the wilds with friends and loved ones, the pleasures of group overland touring, and the chance to explore one of North America’s lesser-visited stretches.

Here, 200 miles of highway can pass without a single gas station, and scant resources require that visitors have an appetite for adventure, a tolerance for the unpredictable, a good high-clearance four-wheel drive, and a considerable amount of pre-planning. But with so much open country, devoid of light pollution, and lacking much of the development seen to its north, it offers visitors an unmatched sense of connection to a seemingly timeless wilderness. 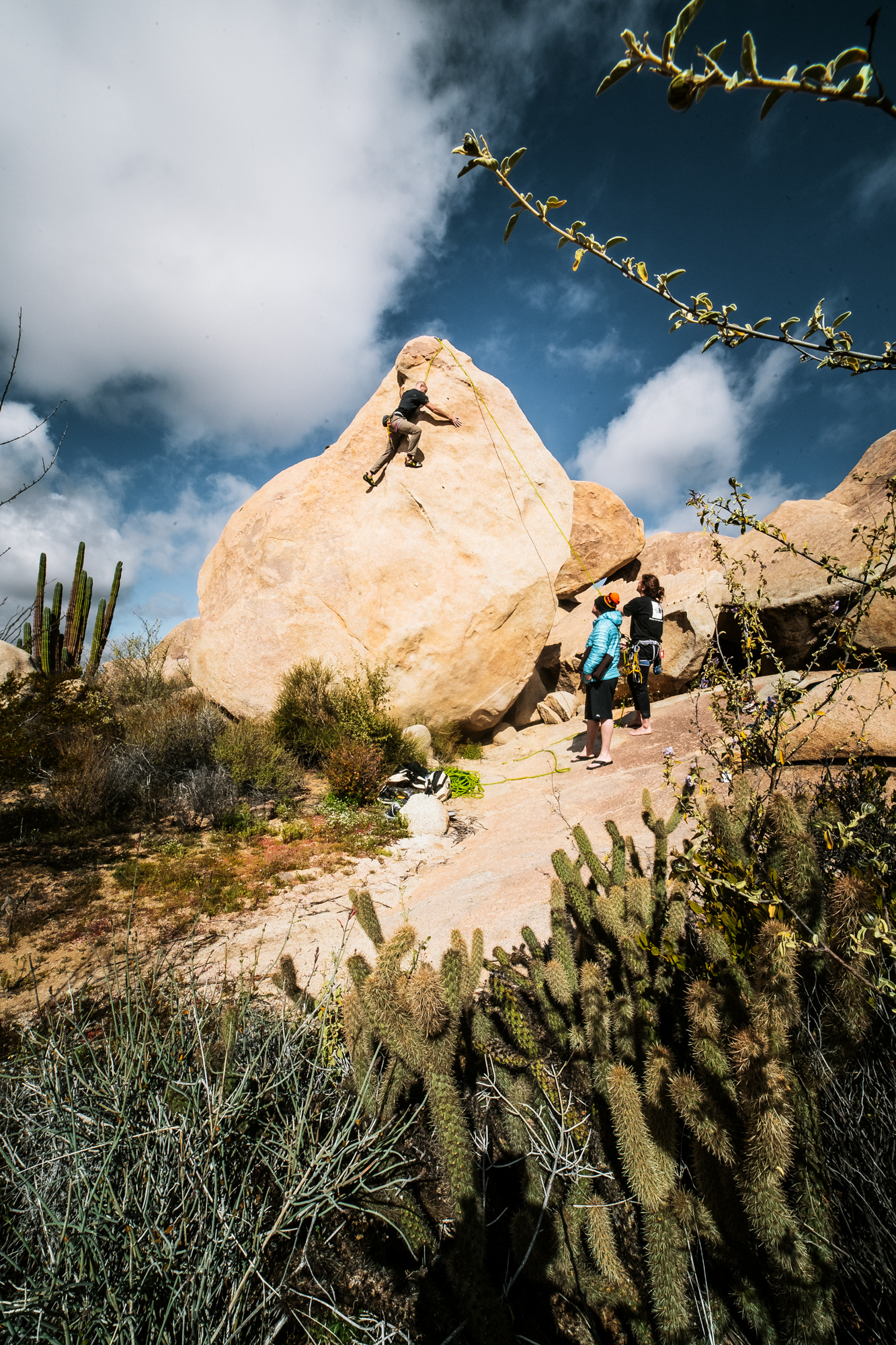 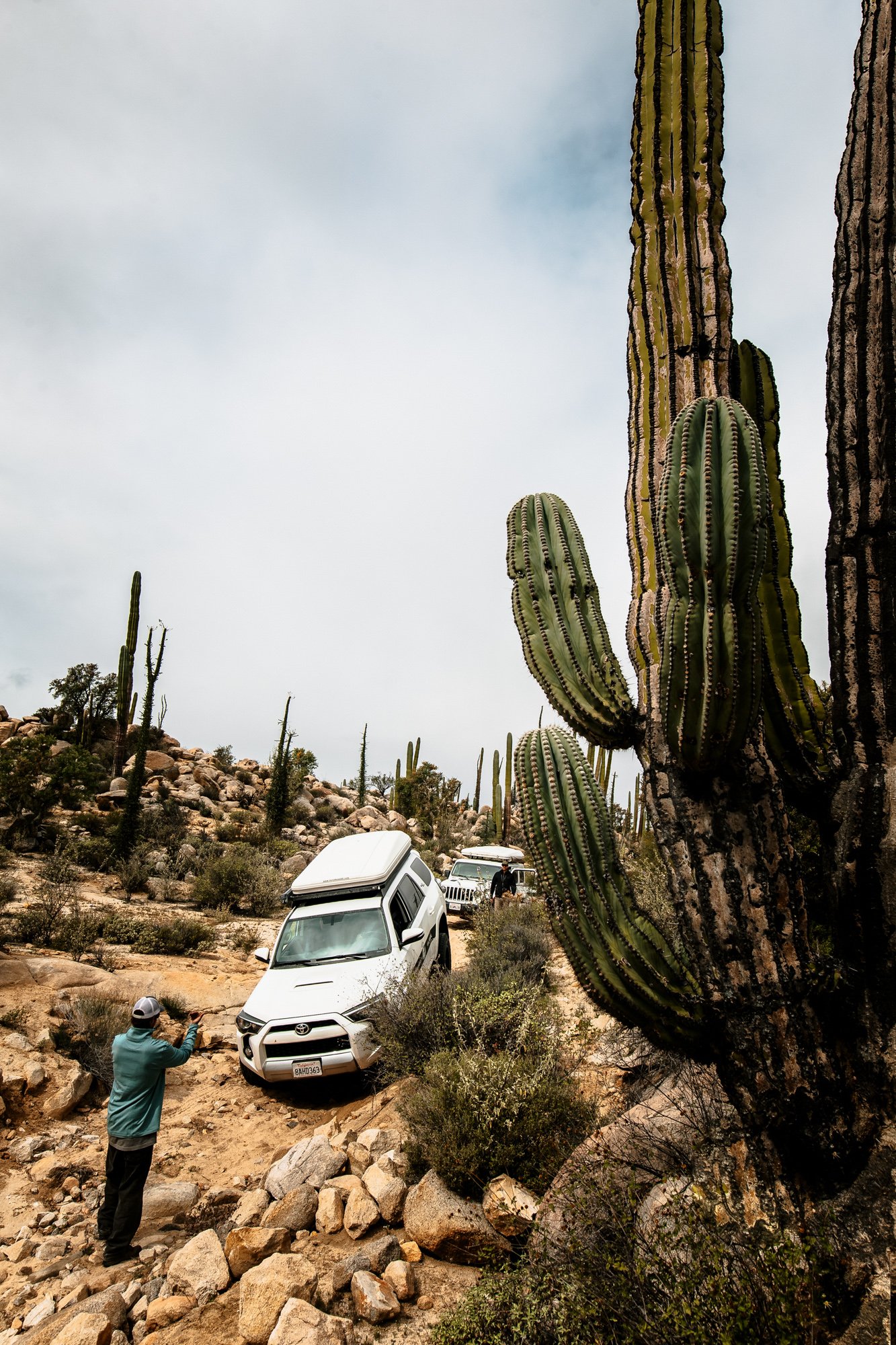 This is a sentiment not lost to Miguel Angel de la Cueva, an impassioned conservationist, our contact in La Paz, and a man who straddles Baja’s many epochs. Miguel has lived in Baja long enough to know it as well as anyone, and undoubtedly better than most ever will. Much of his life has been spent pushing his Land Rover Discovery high into the Sierras de La Giganta and Guadalupe ranges, then trading it for a mule or his boots, as the trail narrows and disappears. His aim, to find and document the rare species and increasingly rare communities that call these mountains home. 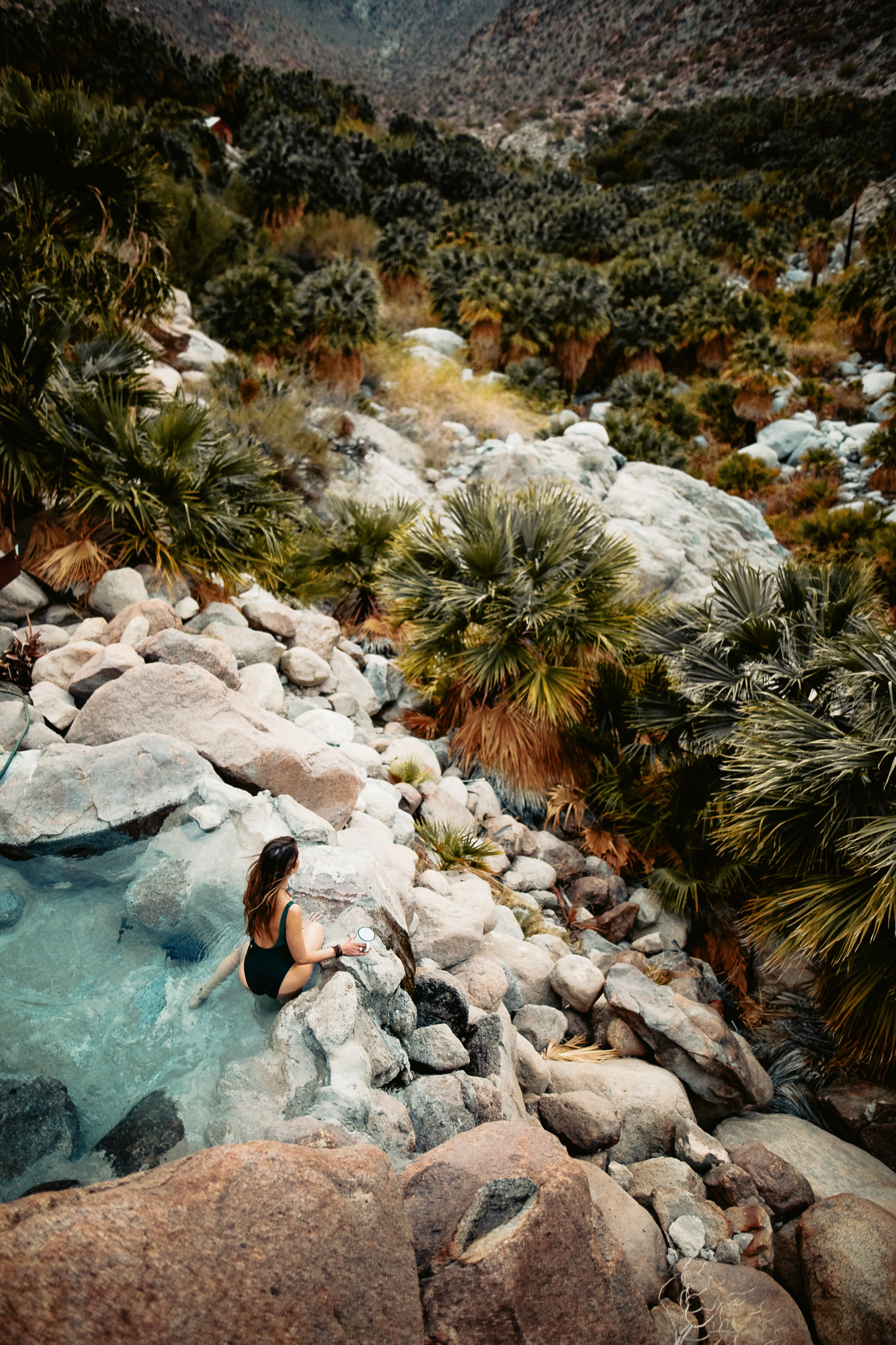 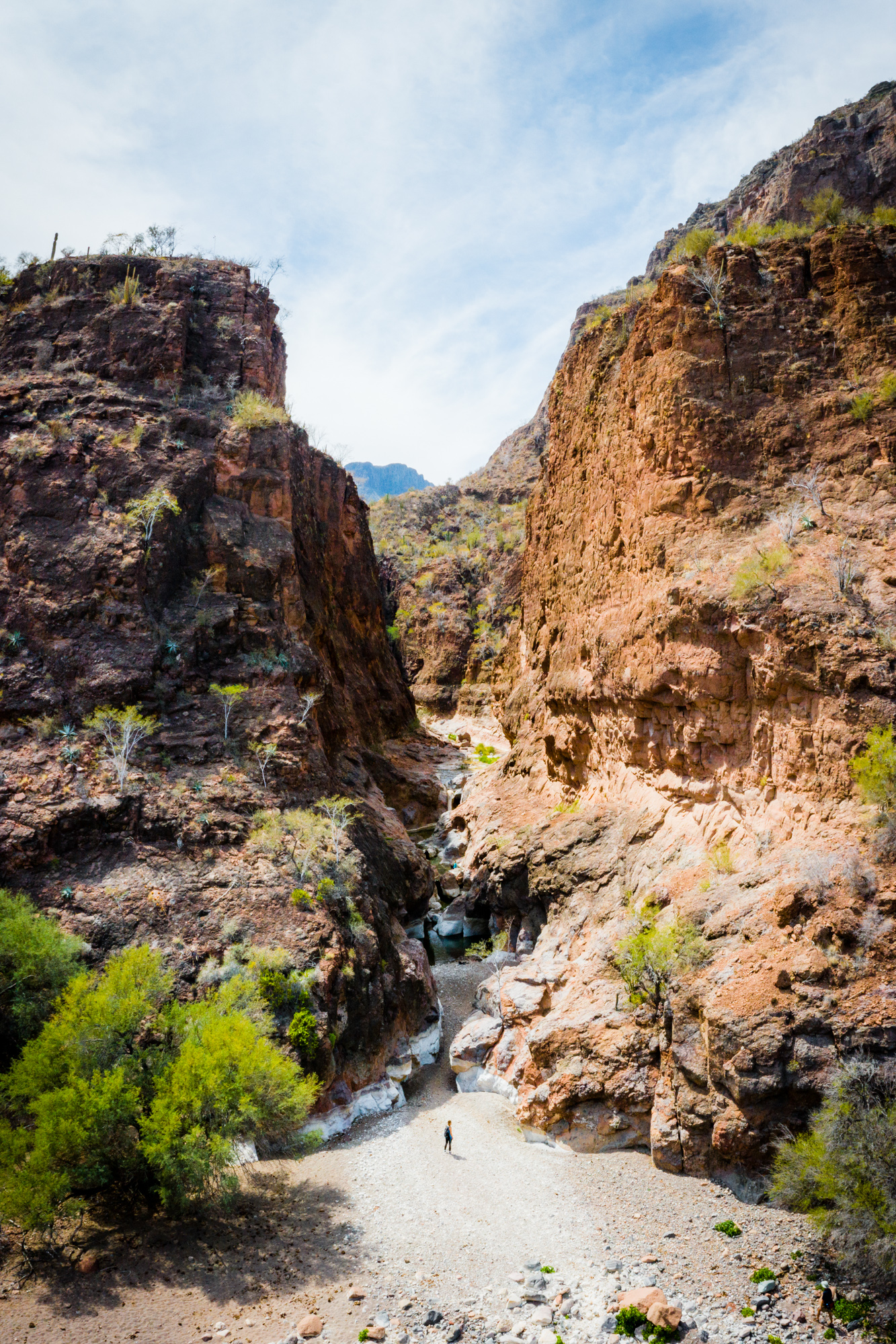 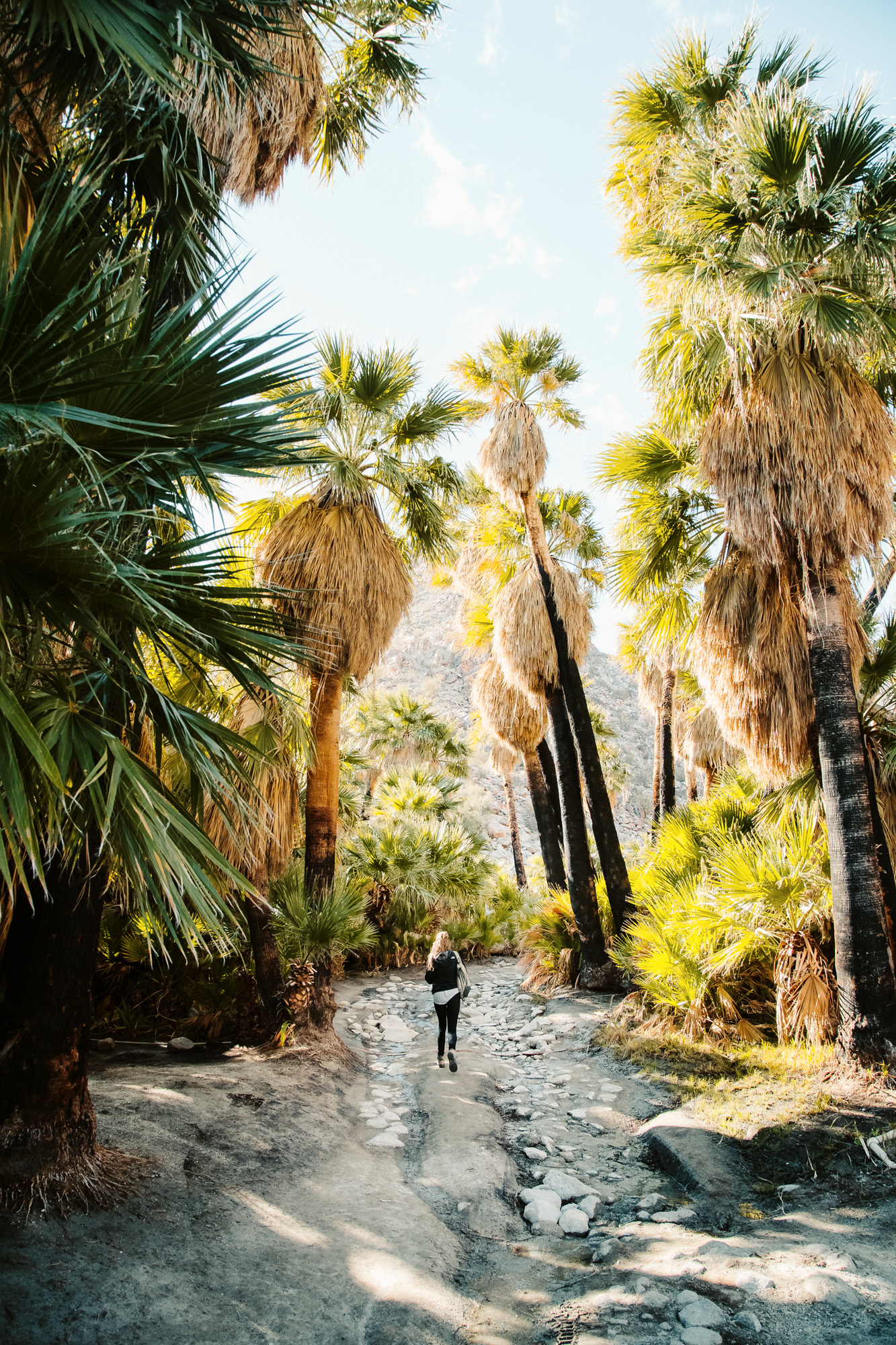 Having met our group in Loreto at the start of our trip back up the peninsula, Miguel described Baja as a vast archipelago, a desert sea dotted with “sky islands” rising above it. Becoming the fractured remnants of a vanishing Pleistocene wilderness at the end of the last ice age, these high-elevation oases and verdant plateaus survived as an arc while the rest of the peninsula became hotter and drier below. Today they are uniquely fragile and isolated ecosystems, much like the communities of people that call them home, who brace against climate change and the dwindling economic opportunities that force many to leave. 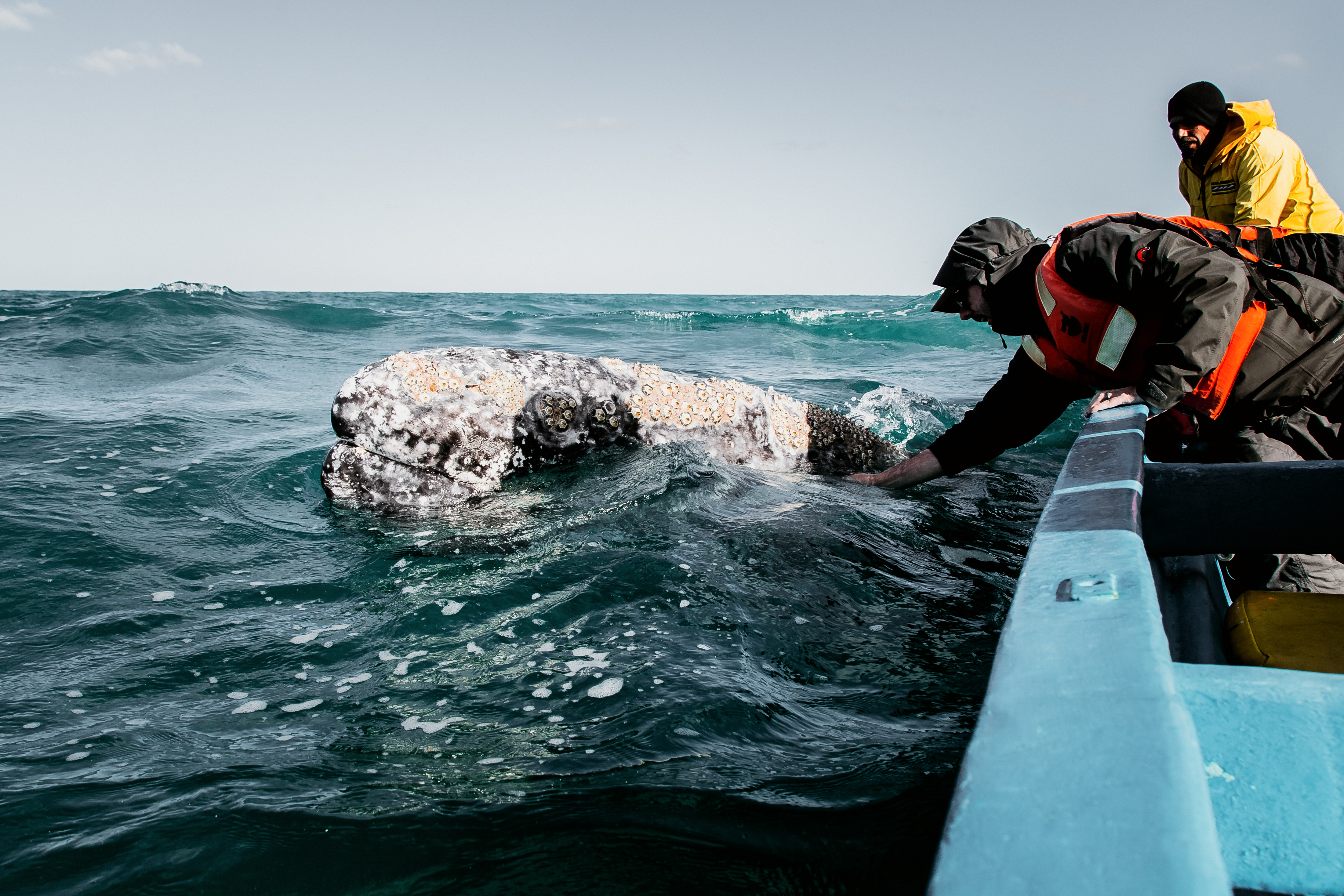 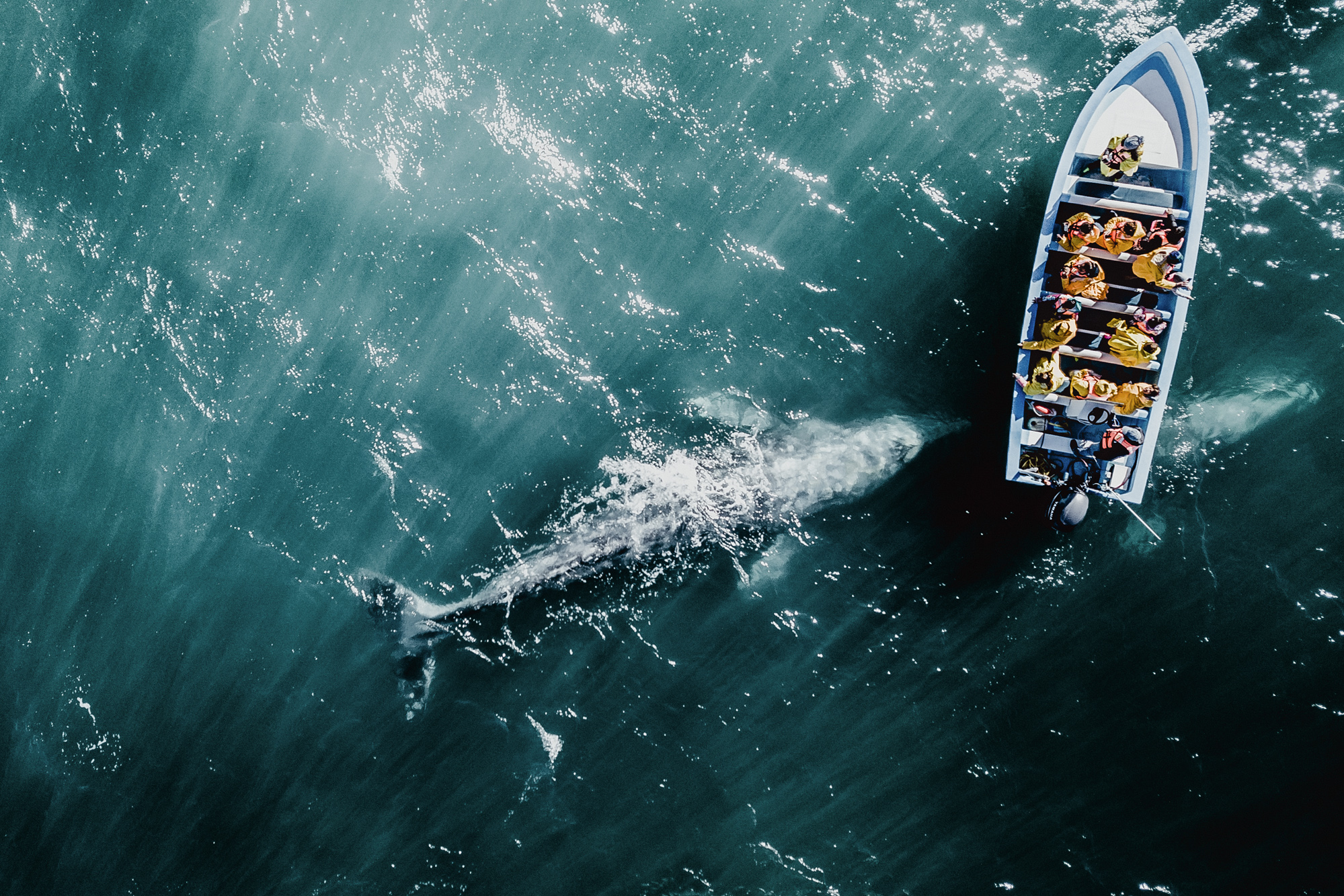 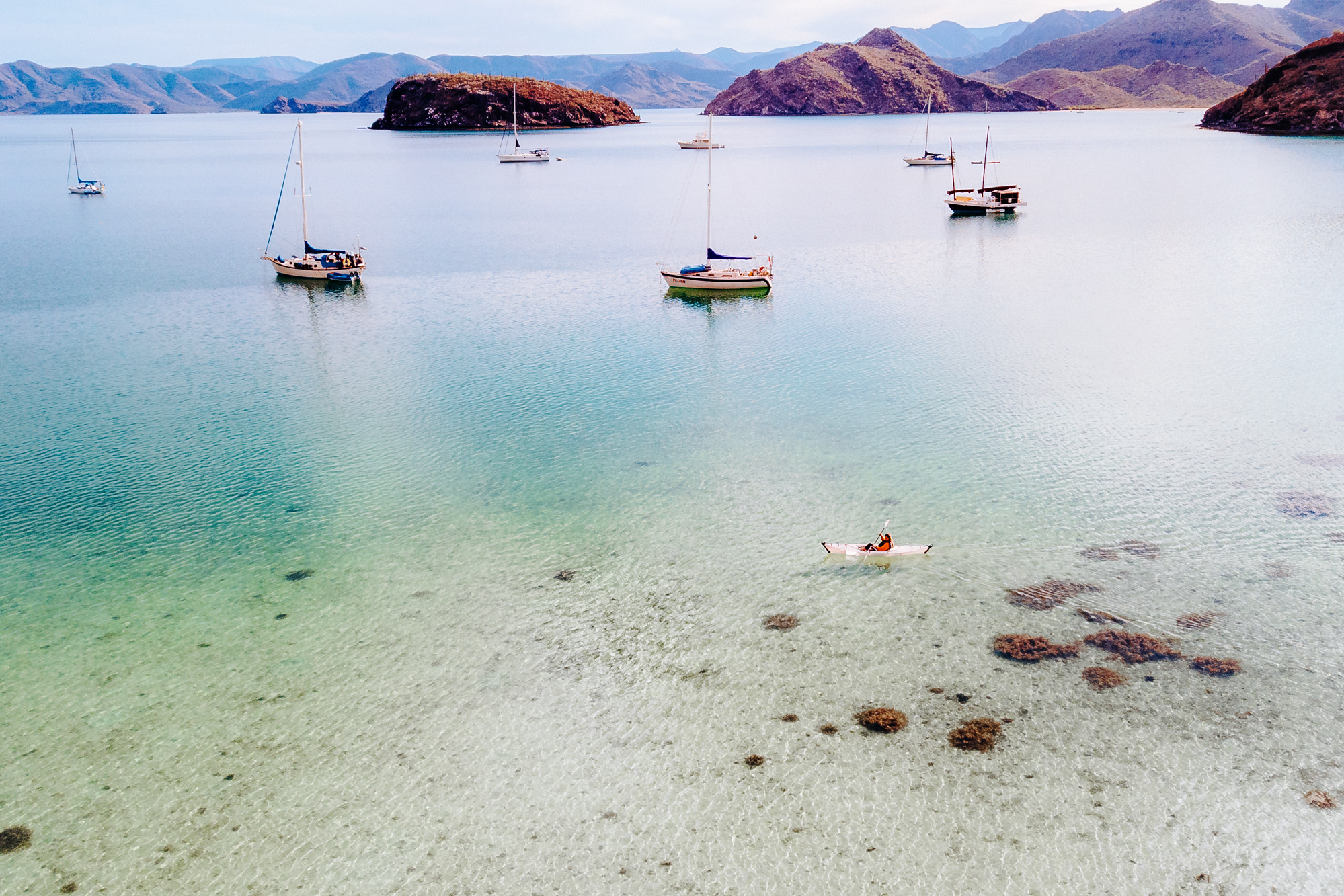 Small ranch towns in these mountains bare names like Vivelejos, or “live far,” and trace their plots back to the Jesuits arrival some 300 years ago. The ranchers, many with skilled trades, unique crafts, and rich traditions, now depend on the few Western visitors they receive looking to hunt bighorn sheep (borrego), or in the case of Santa Marta in the Sierra de San Francisco, to see a series of caves recognized by UNESCO as a World Heritage Site for the ancient rock art they contain. 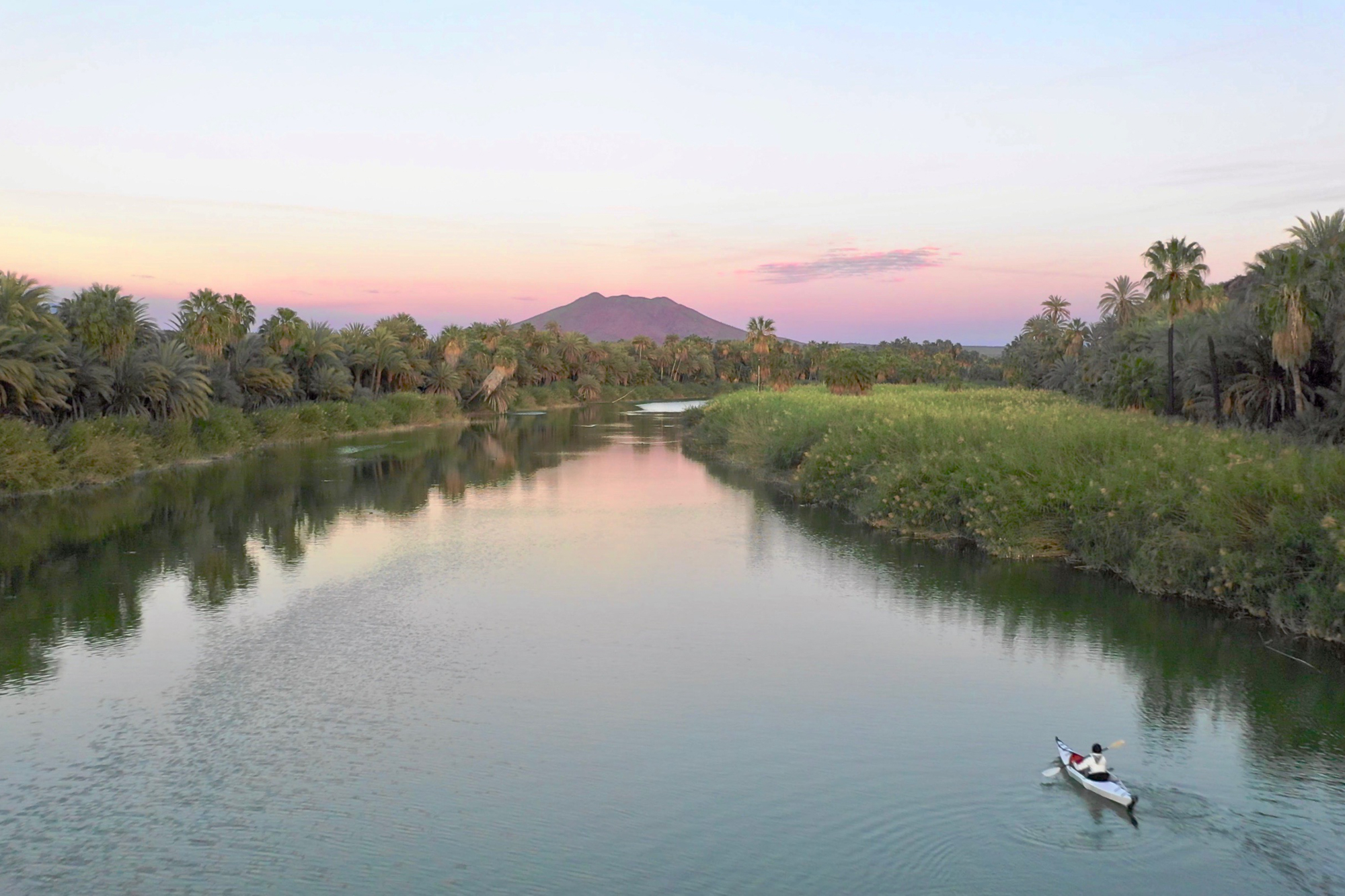 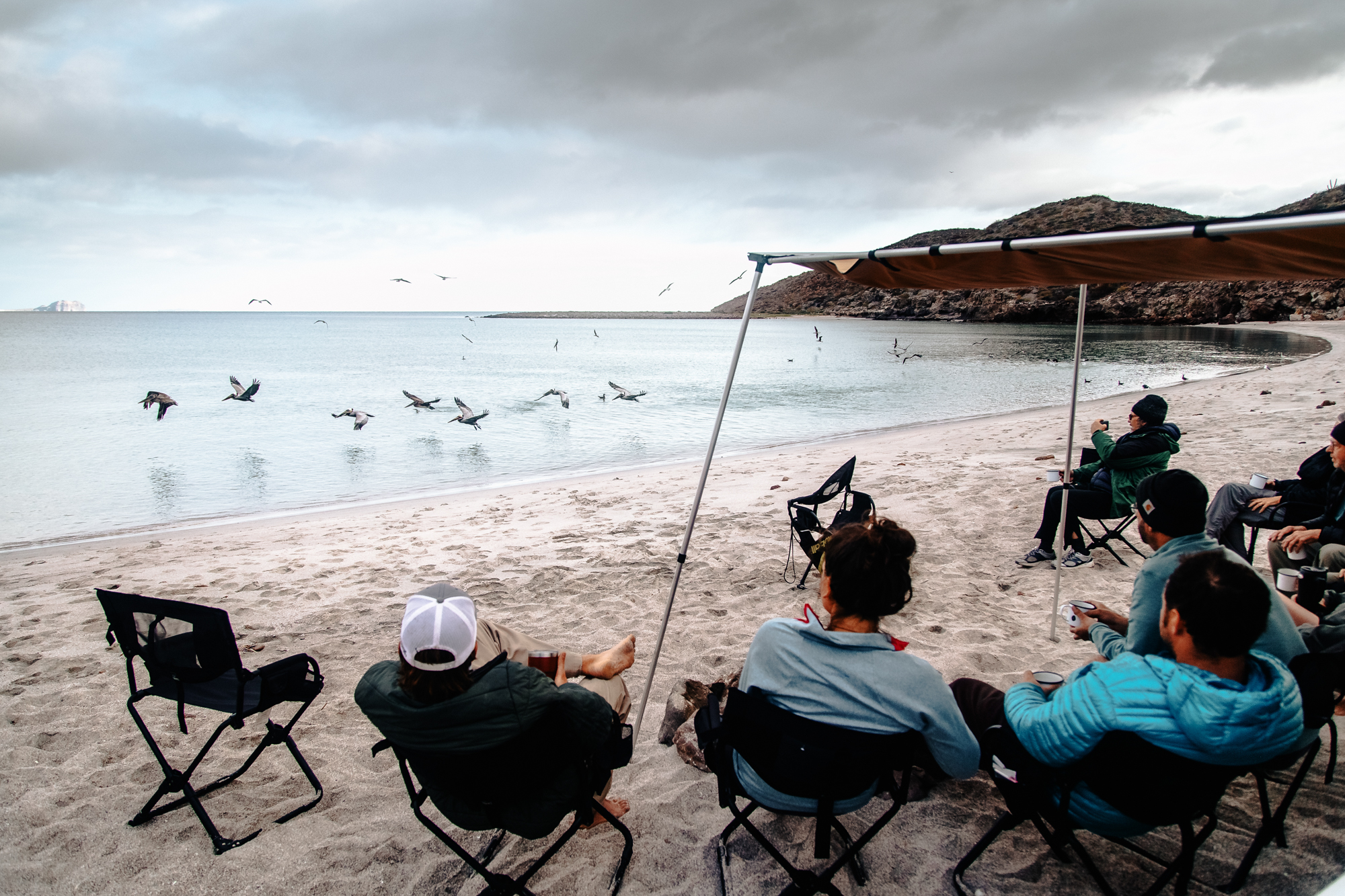 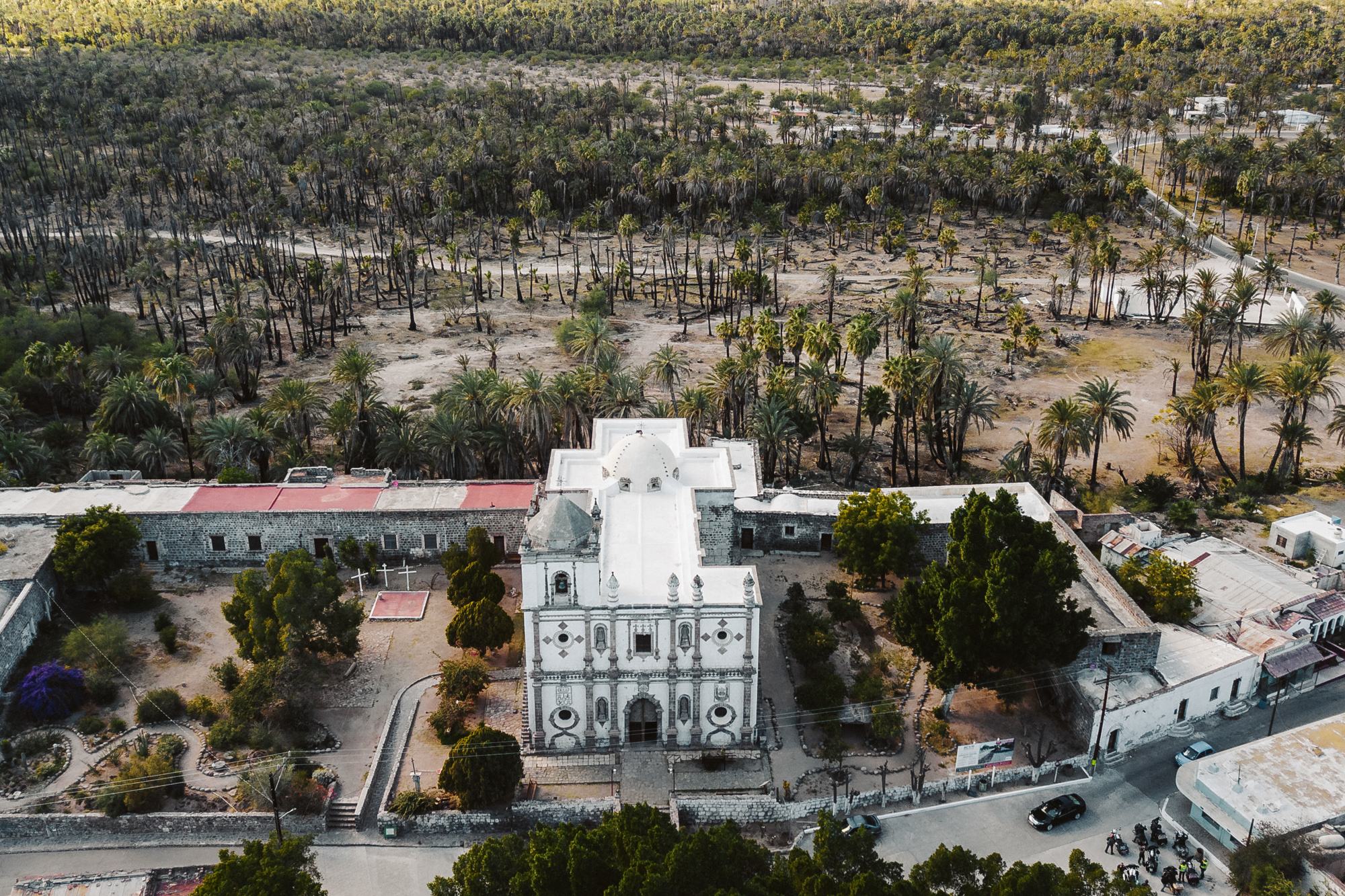 Following a loose description of this site’s whereabouts and our GPS tracks, we drove a long dirt road into the canyoned feet of the Sierra toward Santa Marta, while Las Tres Vírgenes (still active volcanoes) quietly brooded to our South. We made good time along the 30 kilometers of graded dirt, slowing only for a few cattle painfully adorned with cholla cactus. Hare, deer, and badger disappeared into a bush as we drove. This was the most wildlife we had seen on the peninsula, making it easy to imagine what it must have looked like for the first people to overwinter in the caves above some 9,000 years ago. 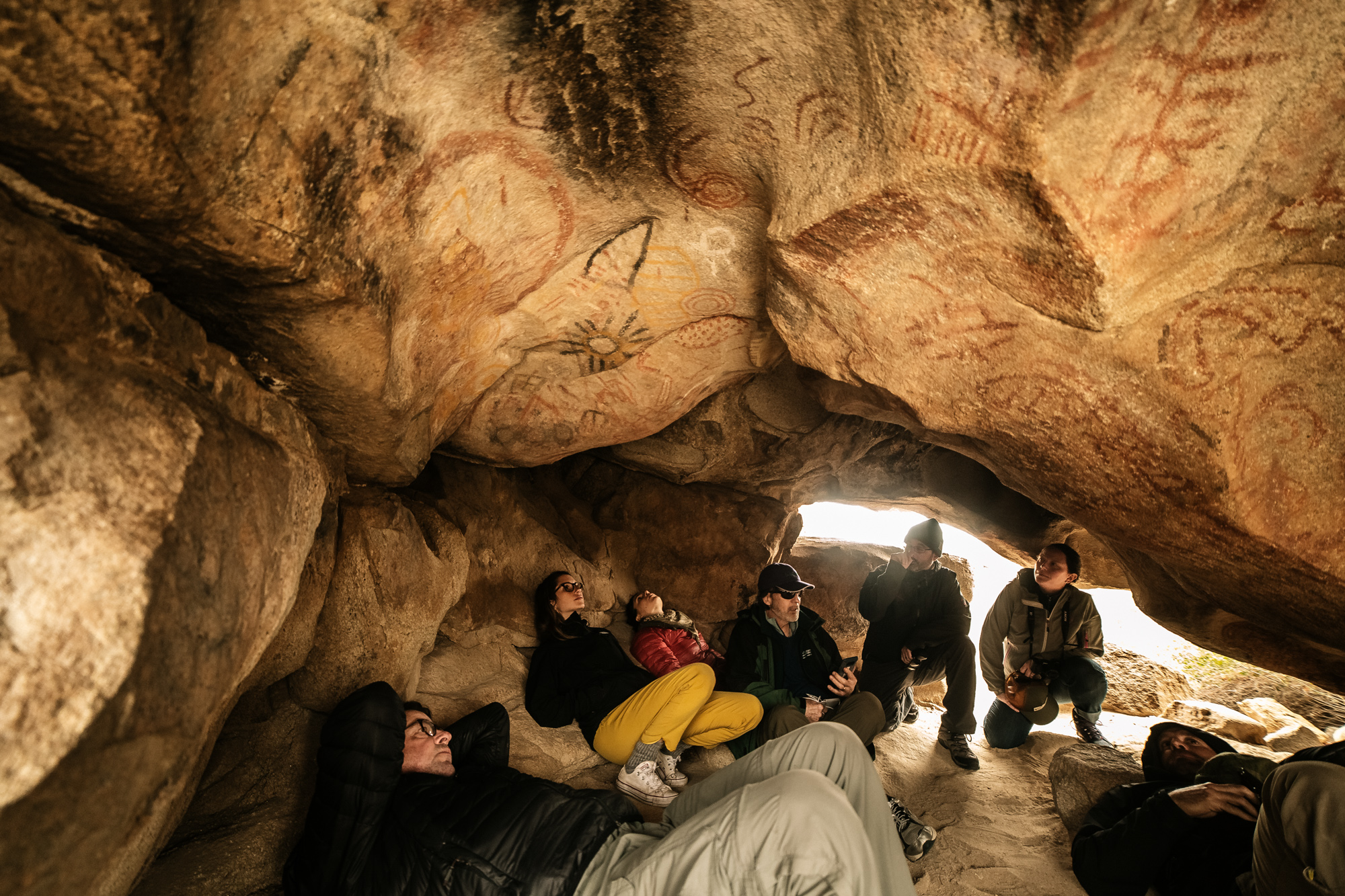 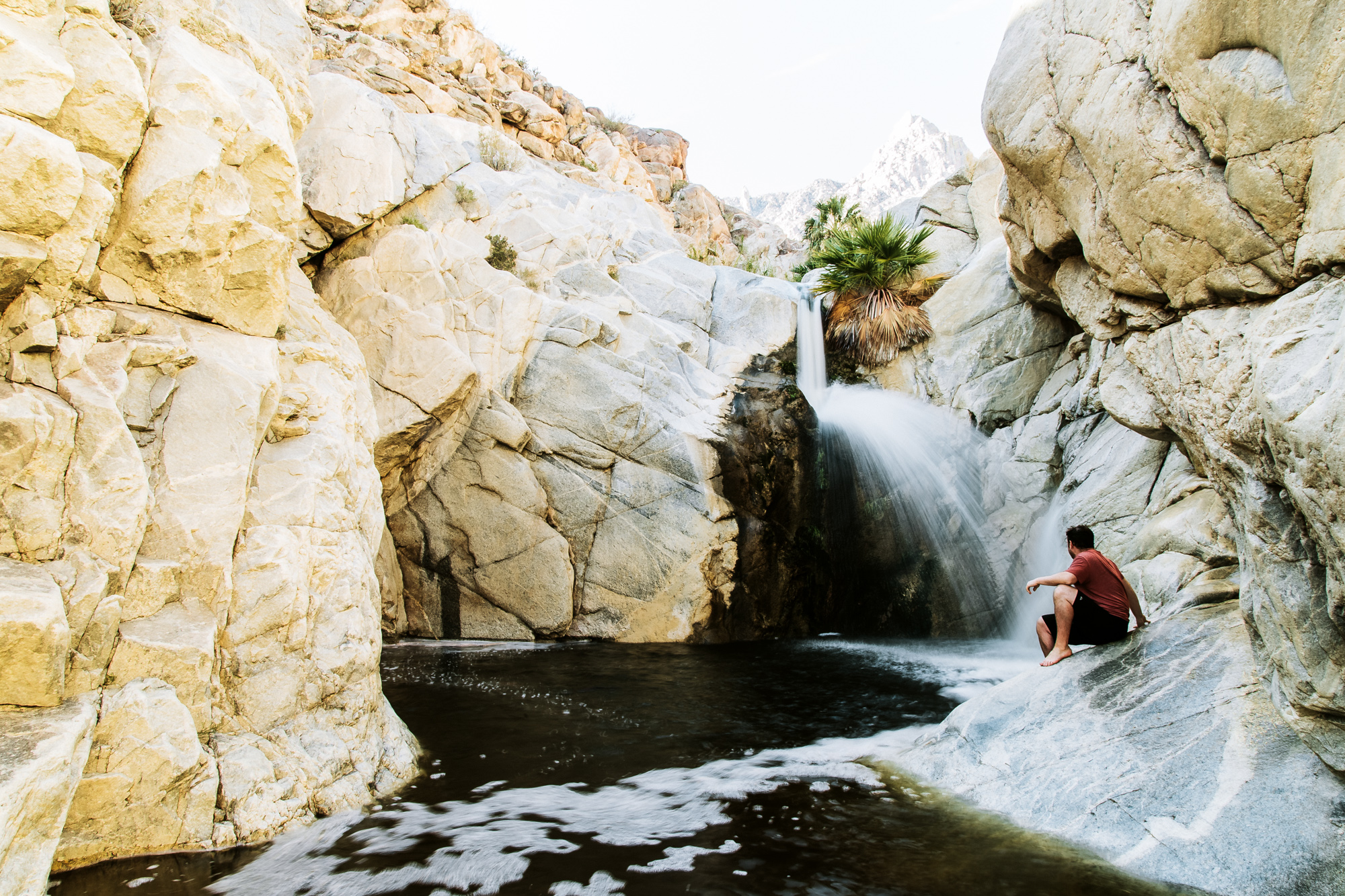 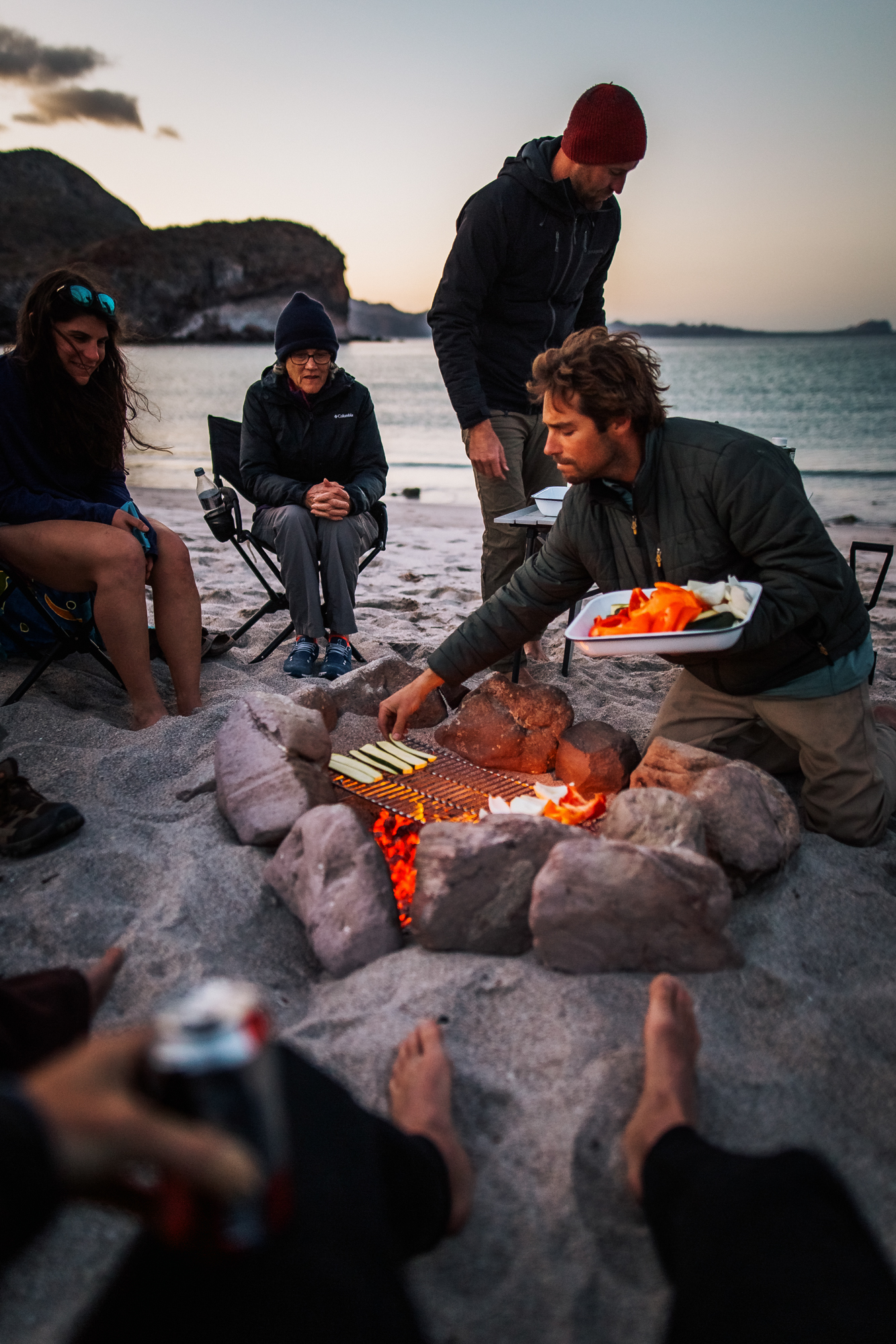 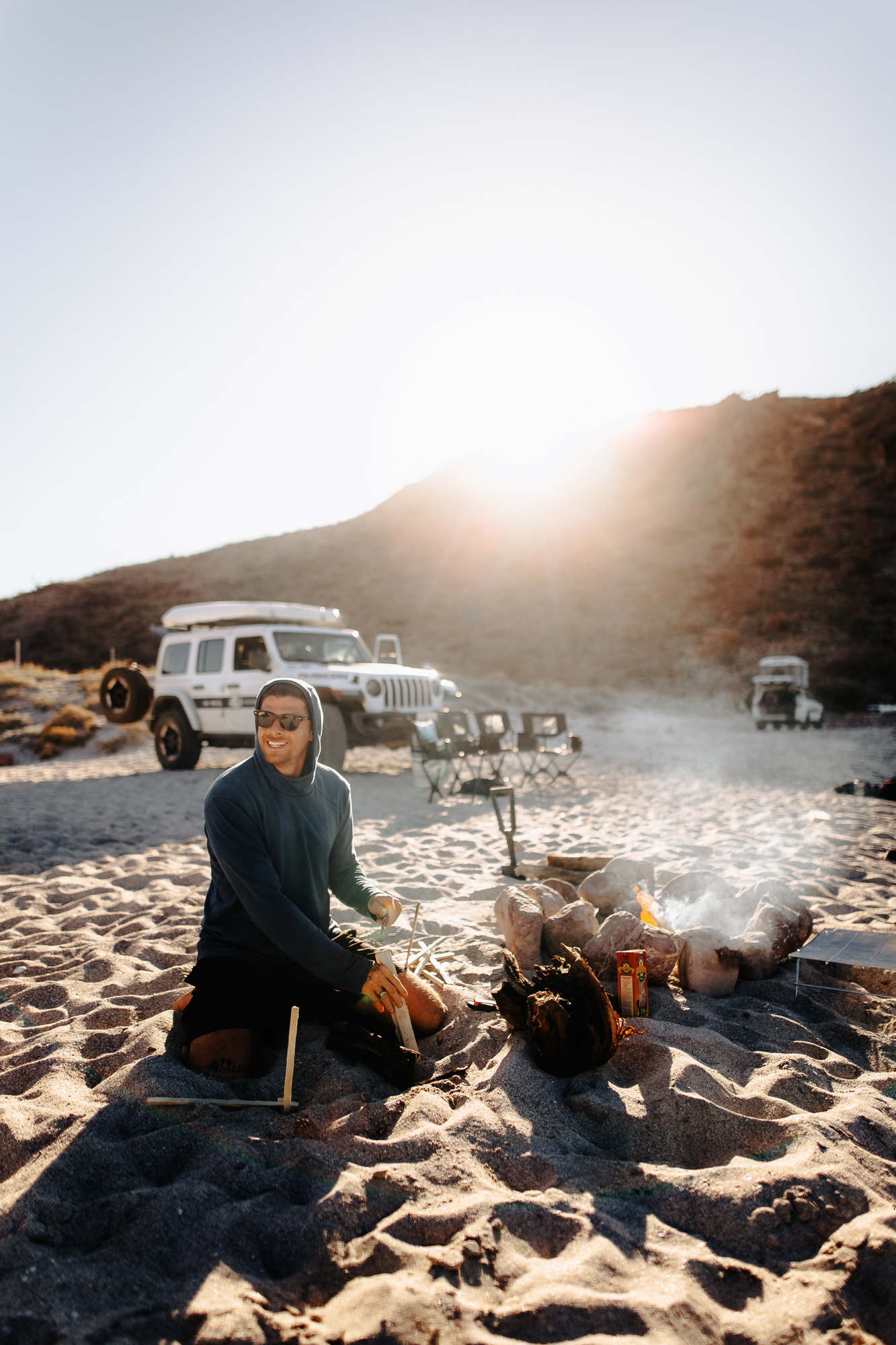 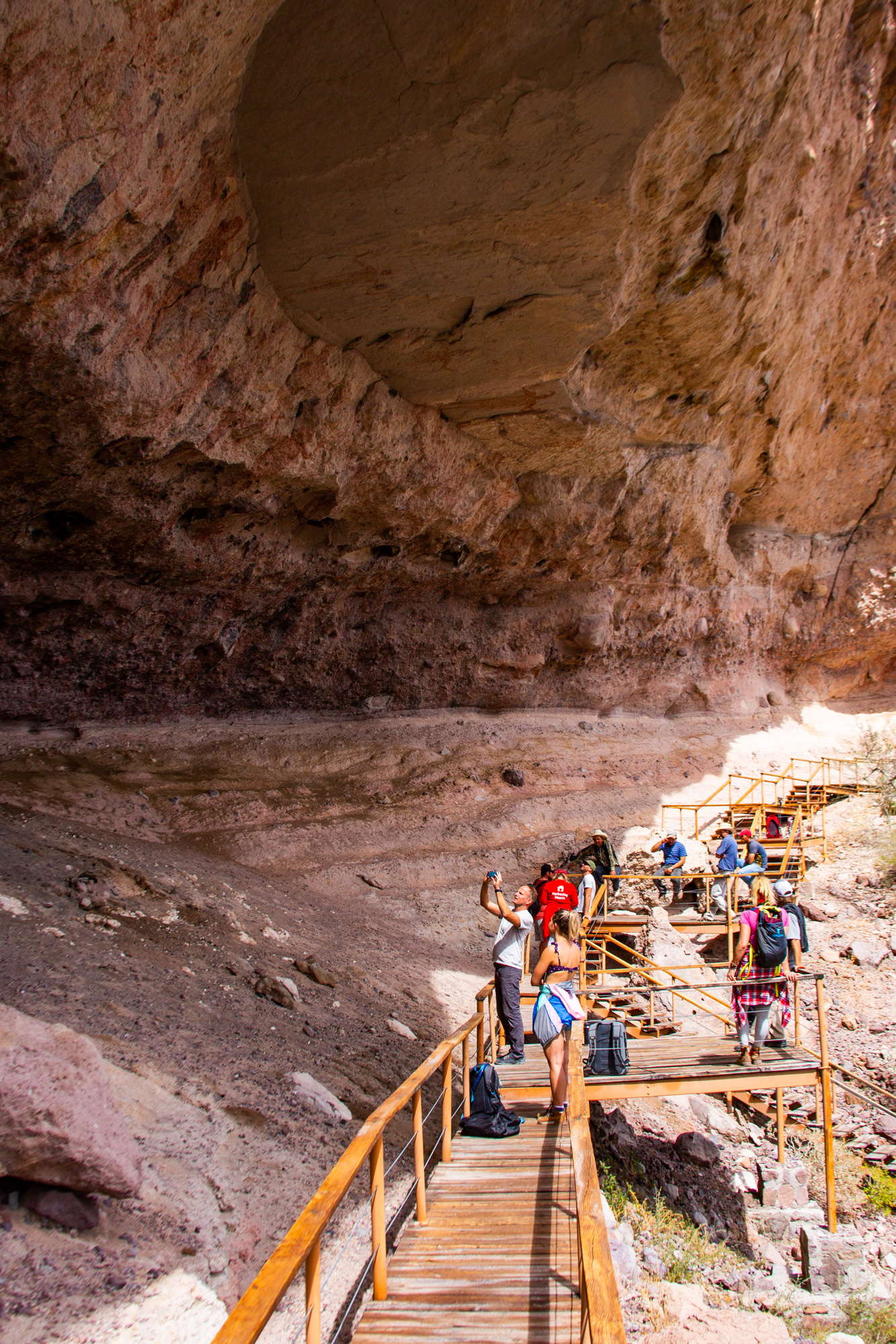 Having arrived and met our guides, we set out weaving steeply through cacti and Palo Blanco into the mountains, where we were soon greeted by an impressive overhang, with sweeping views over the canyon lands below. Its huge petroglyphic panel stretched over 60 feet and at times stood 30 feet off the ground above us; this was the single most impressive display of rock art the group had ever seen. It filled our field of view, covered floor to ceiling in red, black, and tan pigments. Enigmatic human figures with arms outstretched, surrounded by deer motifs, and embellished with rabbit, fish, and whales, showed the bounty of Baja that once was and still is.

Whether those that painted these sites survived the desertification of the area is not well known, but today the communities that protect them and share them with others are able to maintain their lives in the mountains in large part due to the tourism they receive.

Just like the rain that falls over Santa Marta and gathers in the roots and timbers of the plants above, slowing just enough to remain in the earth through the dry season, our visits can nourish this fragile, peopled ecosystem. Lose the ancient plants that cover the mountains, and you lose the water. Lose the water, and you lose the communities. And if no one takes the dirt road to Santa Marta and others like it, the guides will disappear along with their traditions and the lands they look after. 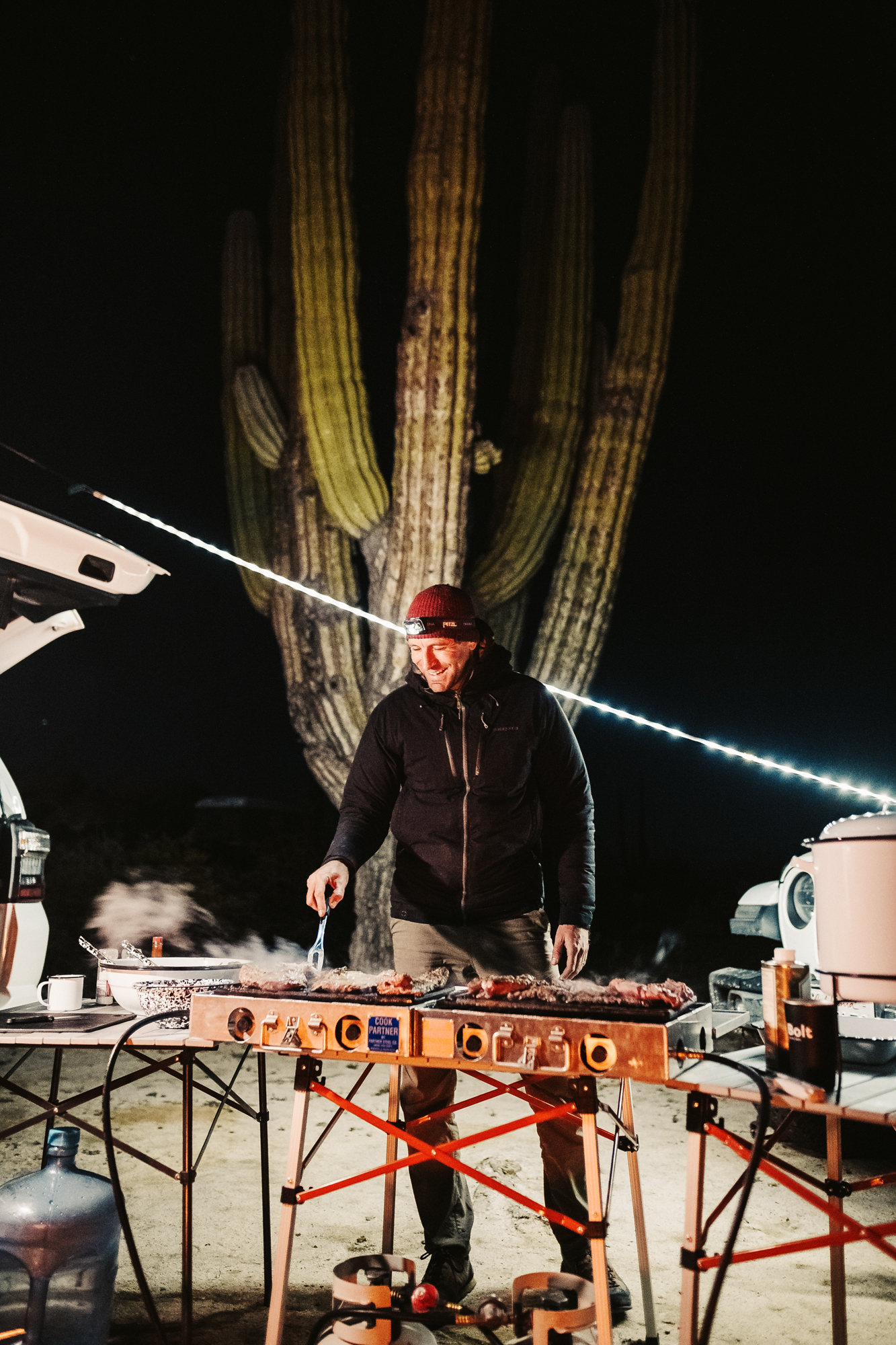 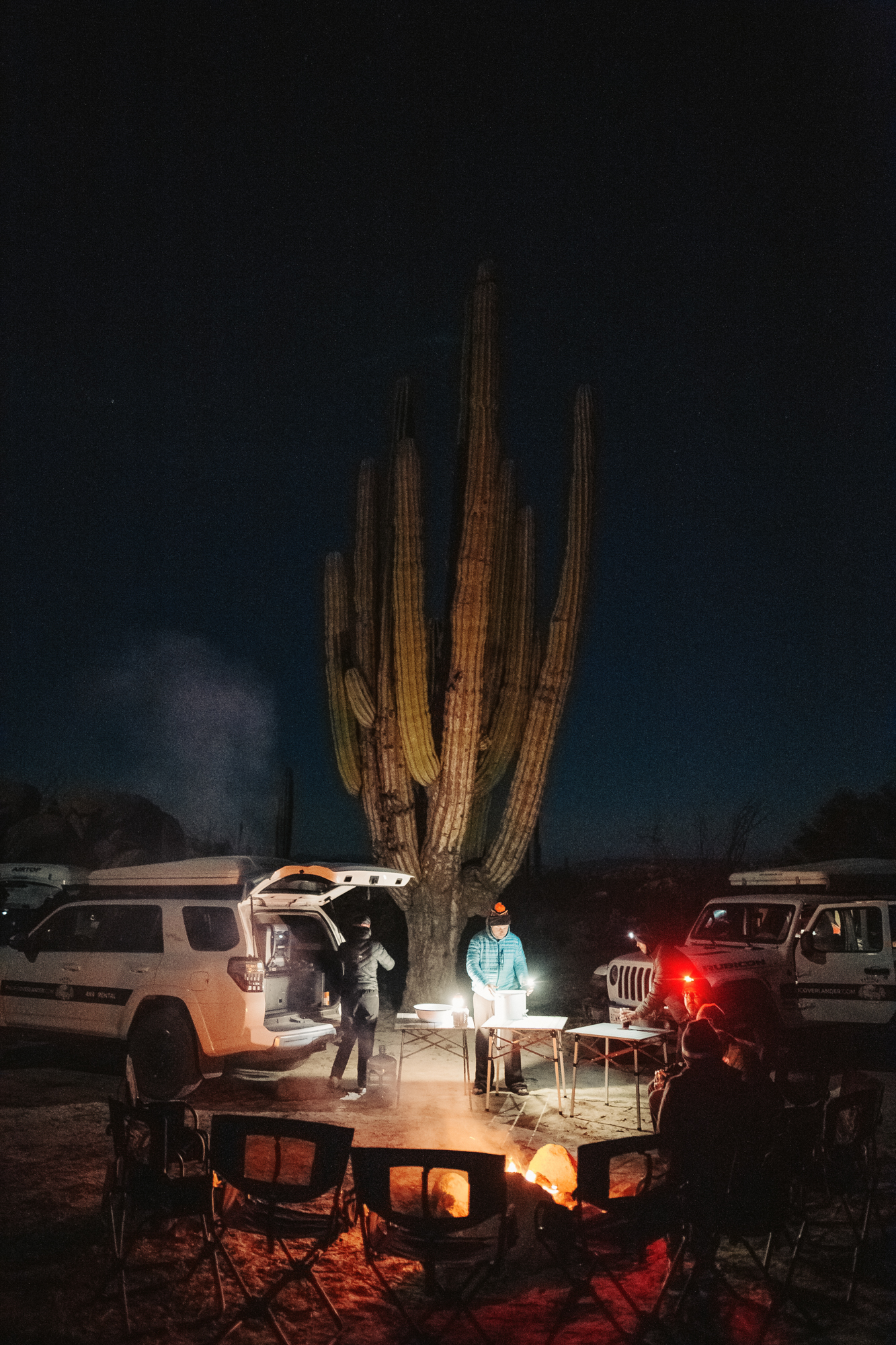 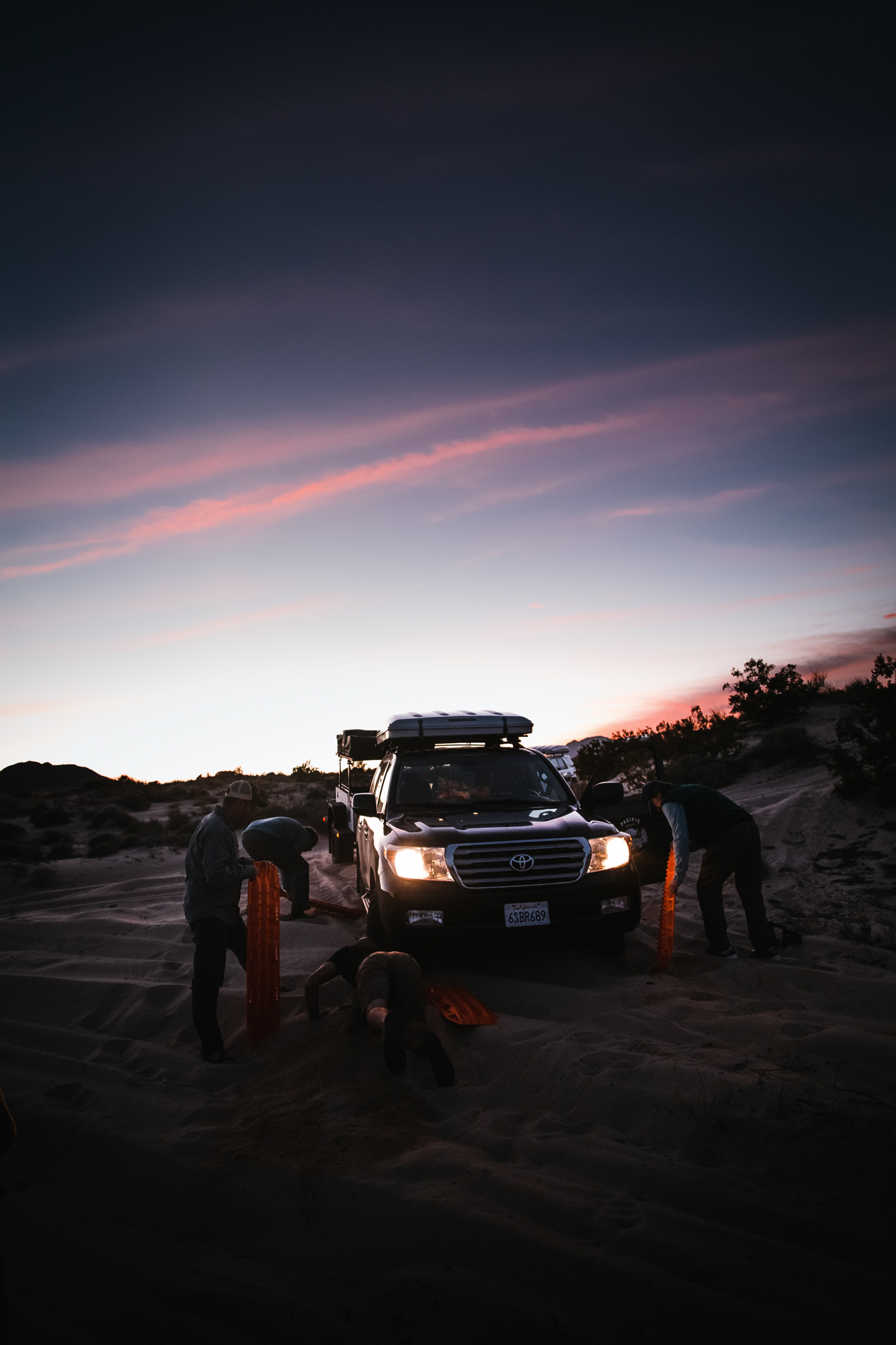 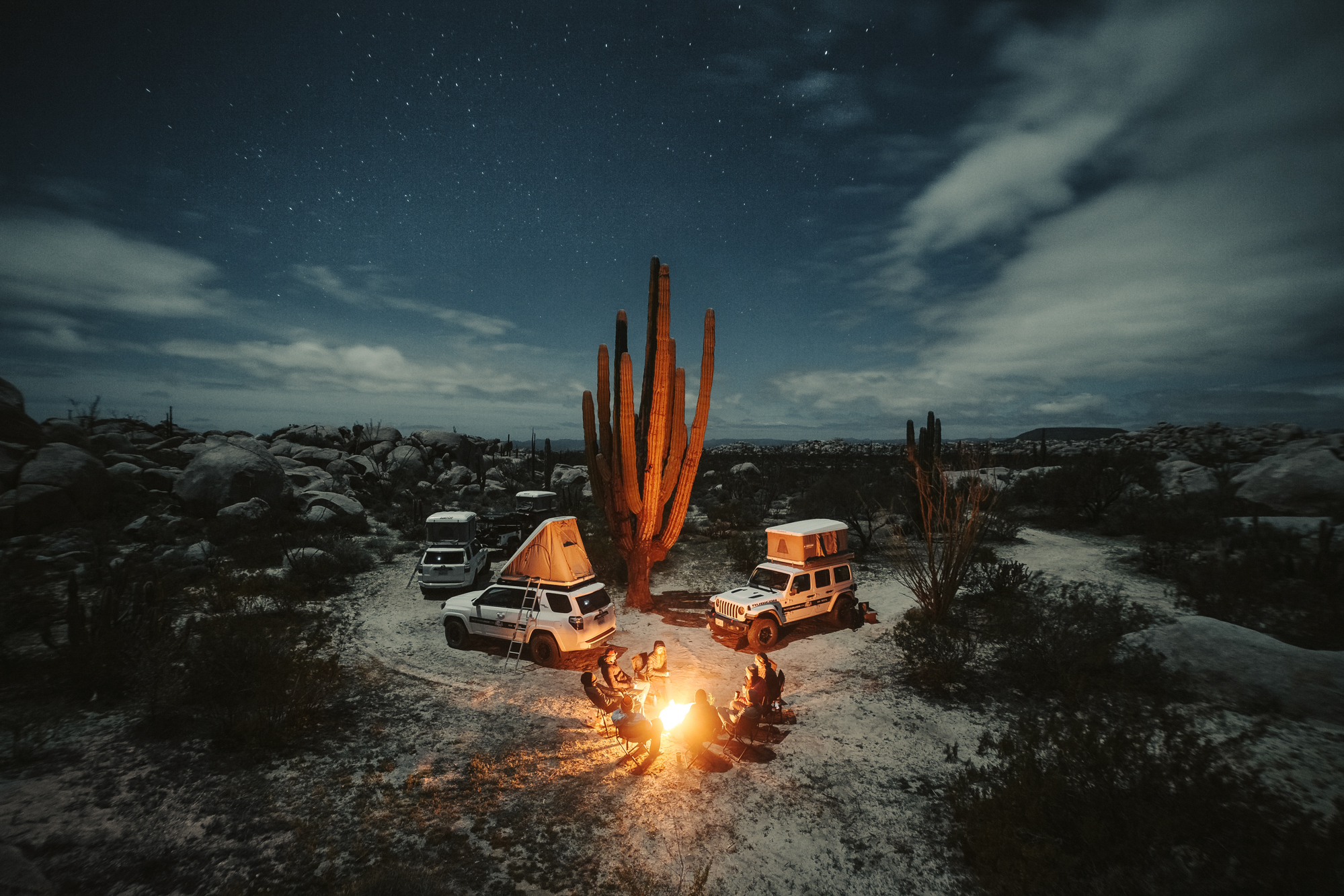 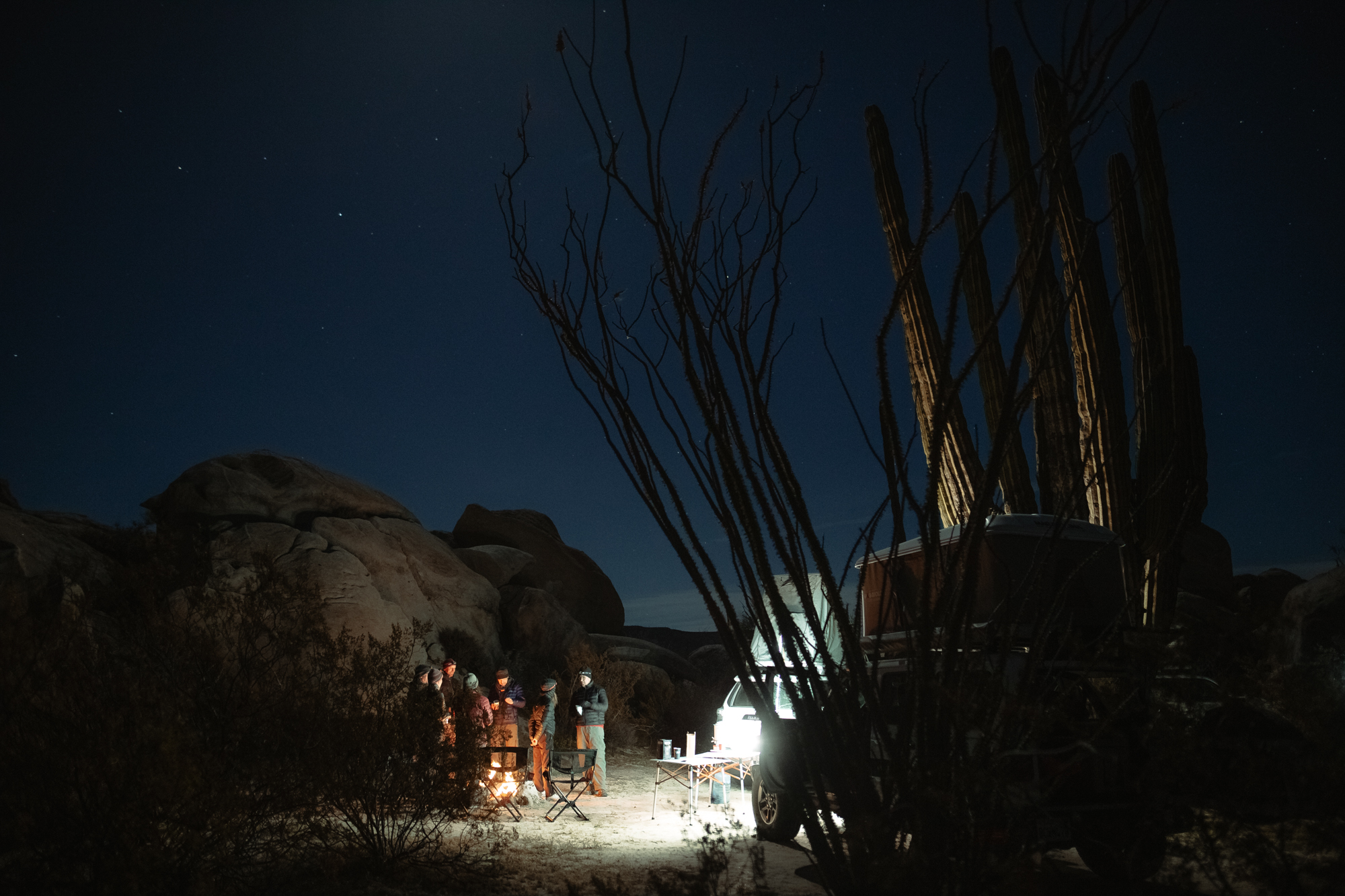 So visit Baja and its far-off places knowing that you are instrumental in their preservation. Come face to face with Gray Whales in San Ignacio and Guerrero Negro. Camp on the beaches of Bahía Concepción. Dine and be welcomed like family in Loreto. Explore the countless islands in the Sea of Cortez. Drive endless trails through the cacti of El Vizcaíno. Rest in its palm-filled oases and hot springs. And take the long dirt road to Santa Marta.

Mason is a third-generation Californian, avid surfer, and outdoor enthusiast. Adventures at home and abroad in search of remote waves and landscapes inspired a love of vehicle-based travel and a vision to share it with others. Today Mason fulfills this passion through Pacific Overlander, the company he founded in 2016, offering rental access to overland vehicles and tours.