Few national cuisines have been so extravagantly gentrified as Spanish food. From upscale tapas bars to artisanal sangria mixology, it’s easy to forget that many of the country’s most popular dishes come from very humble origins. Using basic ingredients and simple cooking techniques, much of Spanish food can be easily adapted for camping. Such is the case with paella.

Paella began as a mid-day meal that was prepared for laborers working in the fields. Cooked in a broad, shallow pan over an open flame, this versatile rice dish would incorporate whatever meat and vegetables were available at the time. As its popularity spread, each region of Spain developed its own unique version of it, resulting in countless provincial variations. This flexibility is great for camping as it allows you to improvise with whatever provisions you happen to have on hand.

Spain is not a particularly wooded country and finding good firewood can be quite difficult. Paella is therefore traditionally cooked over a brush-fed flame, rather than over embers. This direct flame approach is what helps create the socarrat, the layer of burned rice crust along the bottom of the pan that gives paella its distinctive crunch. Cooking on flame is also great for camping (especially for the absent-minded chef who forgets to get the fire going until everyone is already hungry). Just get a few logs going and you’re ready to start cooking.

However, what makes paella great is it’s communal nature. Served family-style right from the pan, there is something about this dish that really brings people together. At festivals across Spain, people line up around massive paella pans to have heaping scoops served onto their plate. Impatient revelers may even stick their forks directly into the pan to sneak a few bites. But thankfully with paella, there is almost always more than enough to go around. And nothing beats turning in for the night on a full stomach.

So on your next overlanding trip, why not bring a little Spanish flare out into the backcountry and give this campfire-style paella a try. 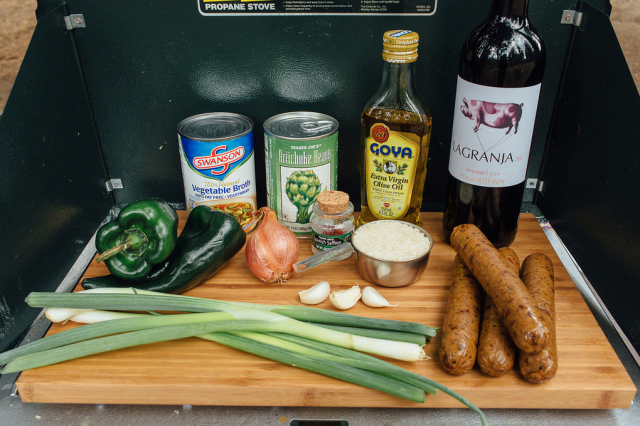 Olive or vegetable oil to cover surface of skillet

Place the poblanos, green onions, and chorizo directly on the grill grate over the fire, turning occasionally, until the peppers and onions are soft and charred and the chorizo is mostly cooked through. Remove from the grill. Slice the chorizo into 1/4 inch rounds. Allow the peppers to cool, then peel off the skin, remove the seeds, and chop. Chop green onions into bite-sized pieces. Set aside.

Place cast iron skillet on the grill directly over the fire. Pour enough oil to coat the bottom of the skillet, then add the shallots. Saute until soft, 3-5 minutes. Add in the sliced chorizo and garlic and saute until the garlic is fragrant, about 30 seconds. Add the rice and cook 2-3 minutes, stirring occasionally, until it just begins to become translucent at the ends. Pour 1/4 cup red wine into the pan, allow to evaporate, and then add the broth. Season with salt and a pinch of saffron. Stir well to evenly distribute all the ingredients, and then allow to simmer, undisturbed, until all of the liquid is absorbed, 20-30 minutes.

Add the chopped poblanos, green onions, and artichoke hearts to the pan to reheat. At this point, the paella will begin to develop the socorrat on the bottom. After a few minutes you will begin to hear the rice begin crackling – this is your indicator that the dish is nearly done. Cook for a few more minutes to ensure the socorrat has developed (you can use a spoon to check a small portion of the pan).

Serve immediately, shared out of the skillet or served on individual plates along with a glass of the remaining tempranillo. 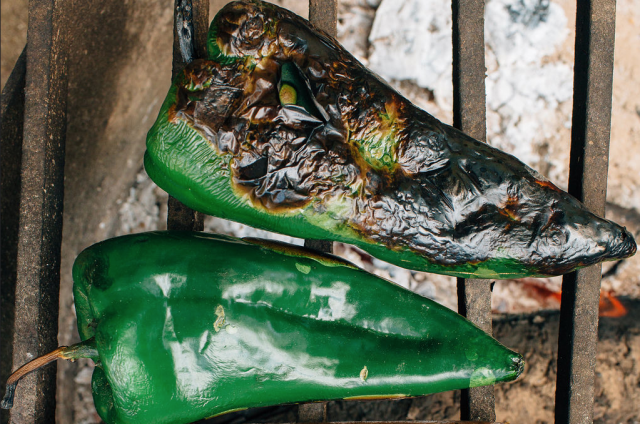 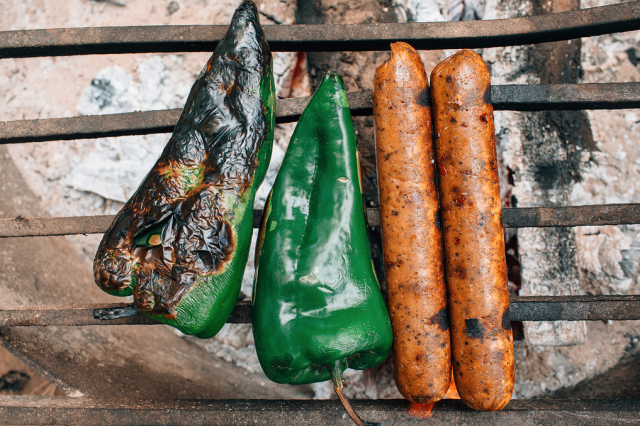 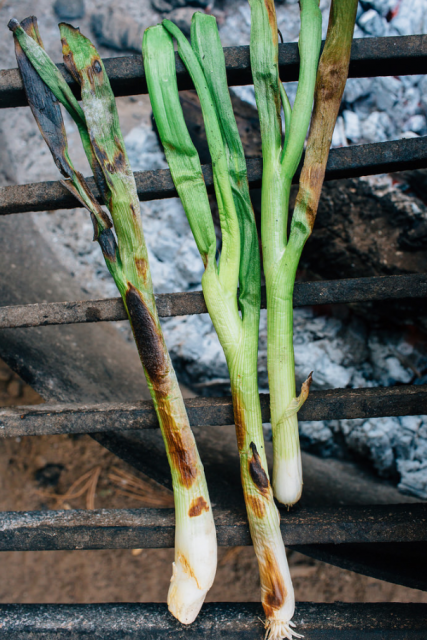 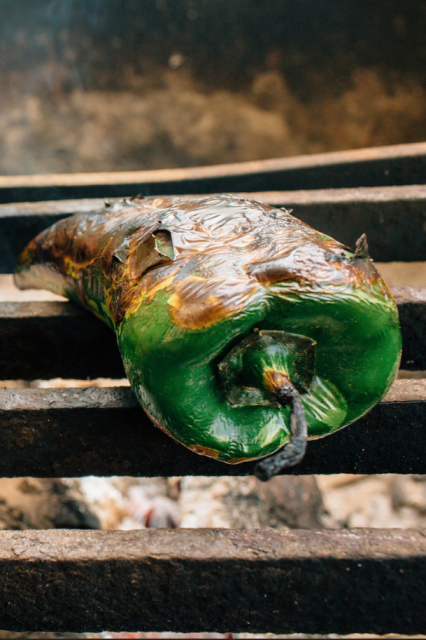 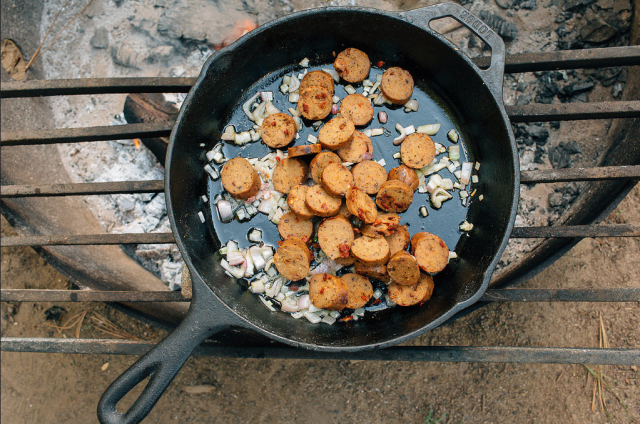 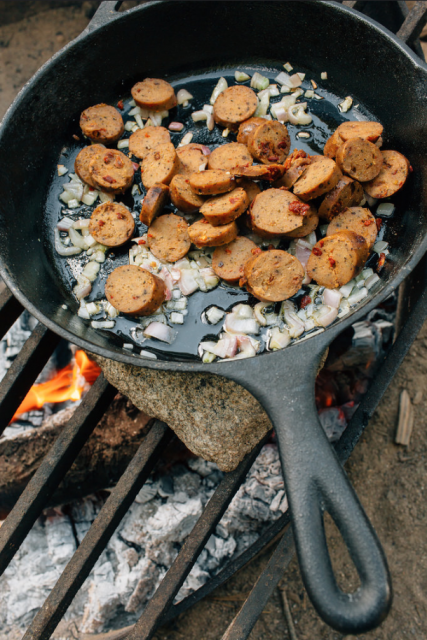 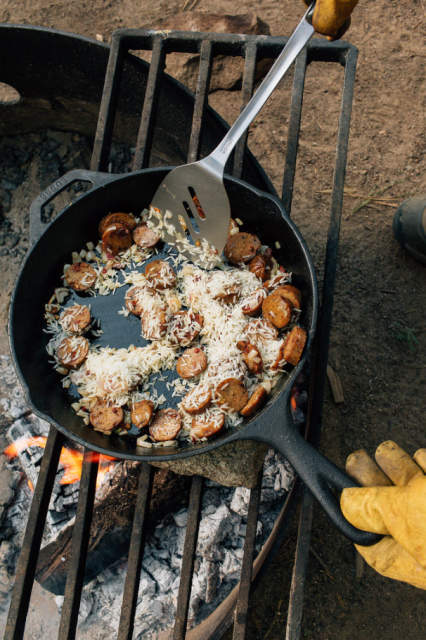 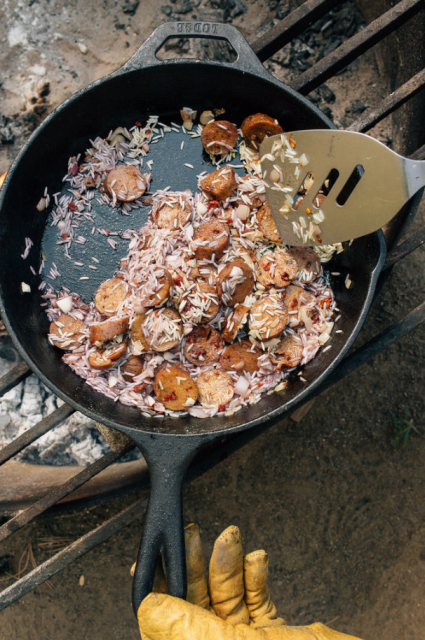 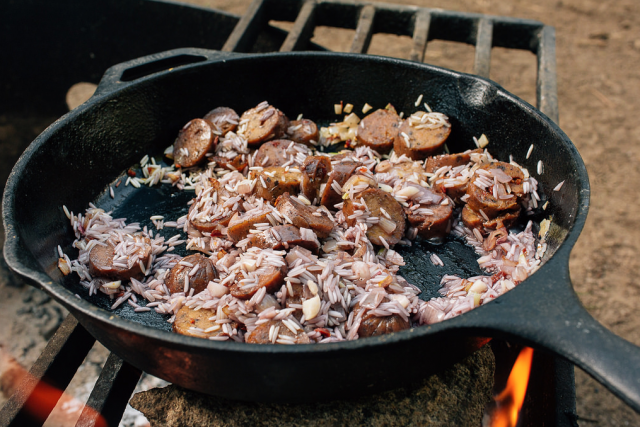 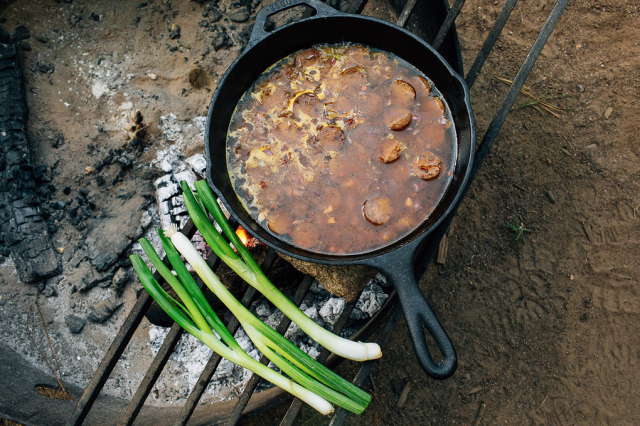 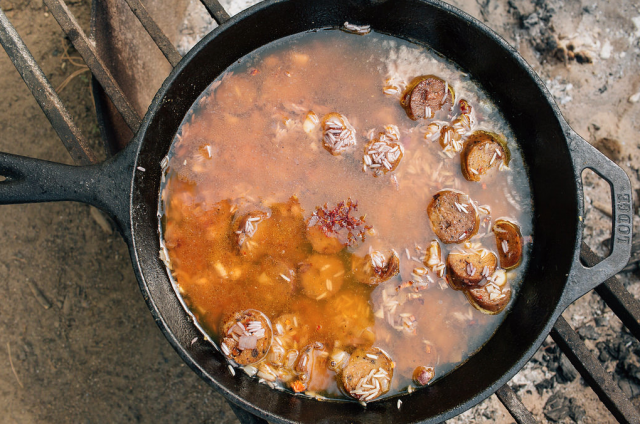 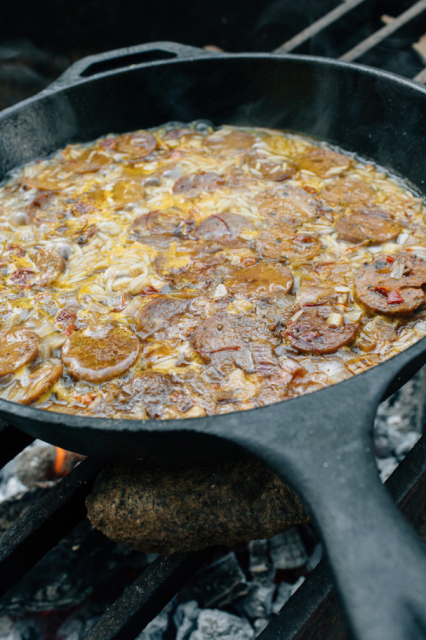 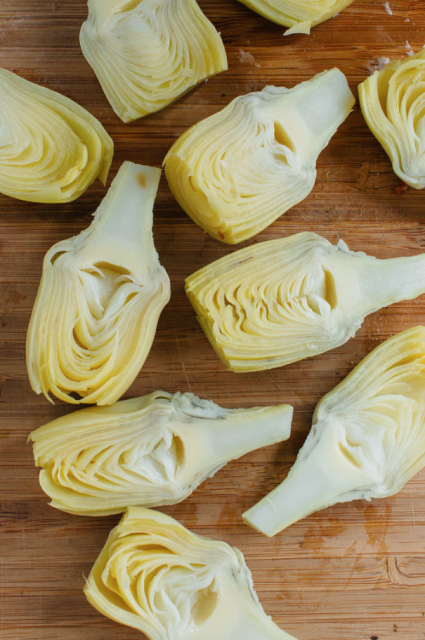 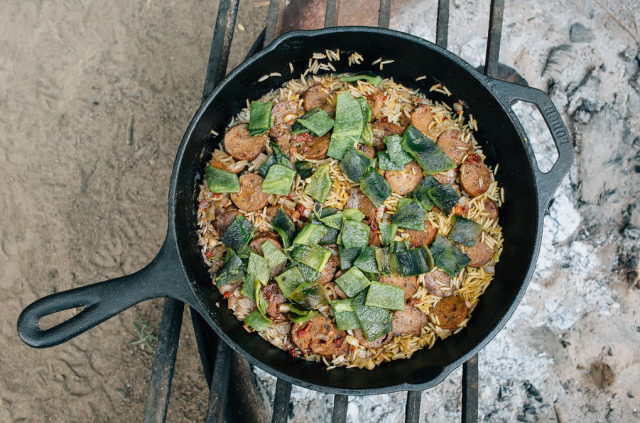 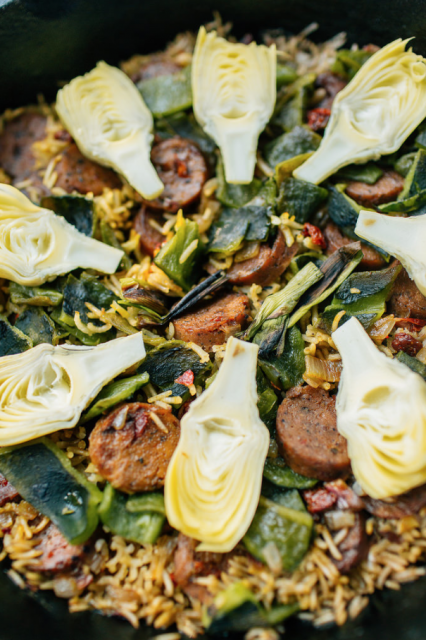 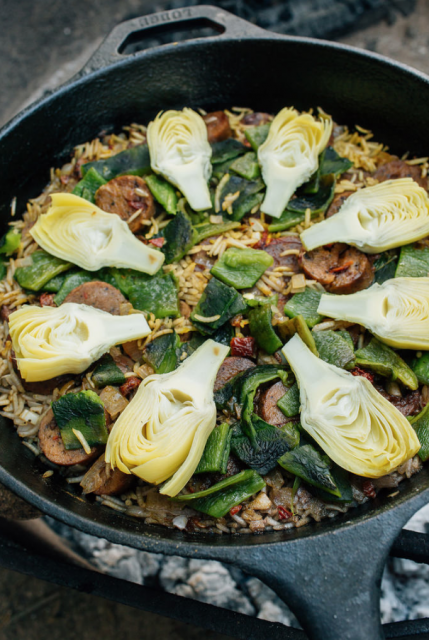 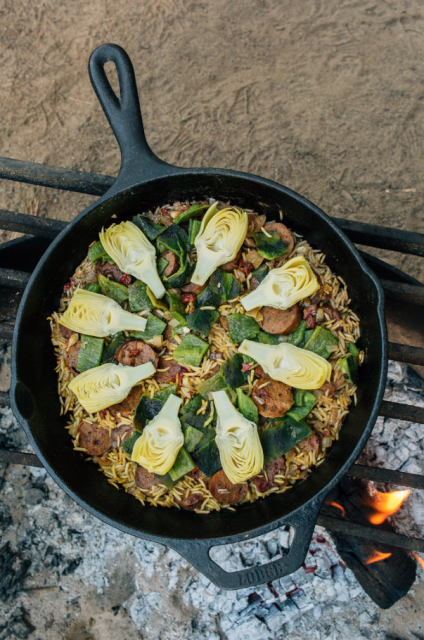 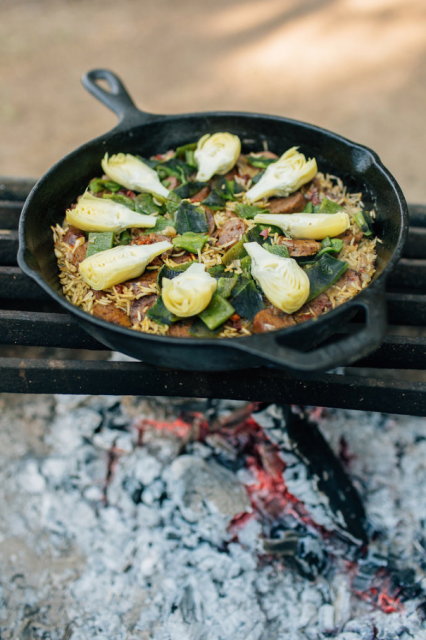 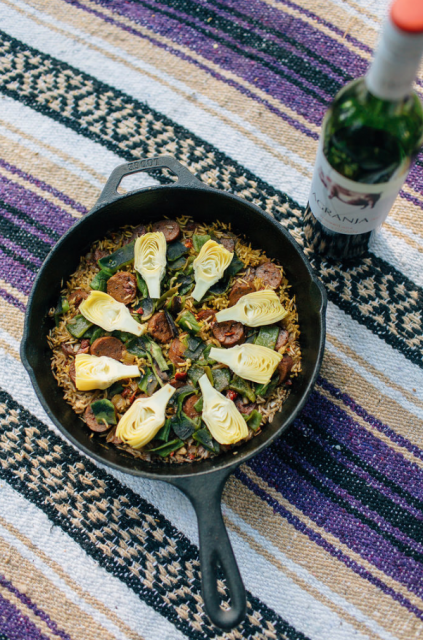 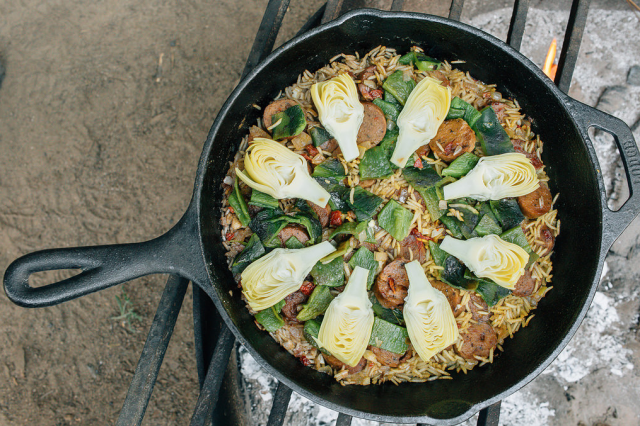 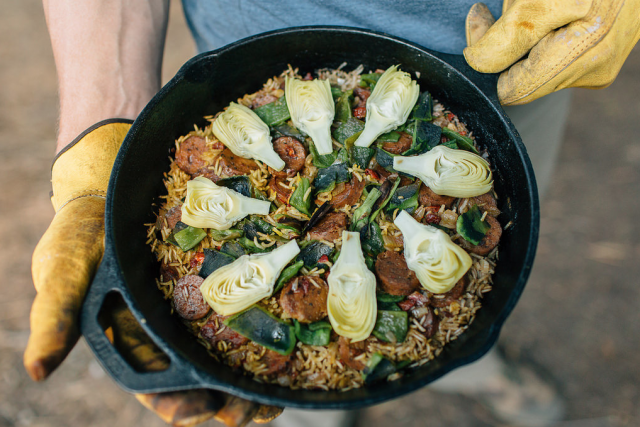 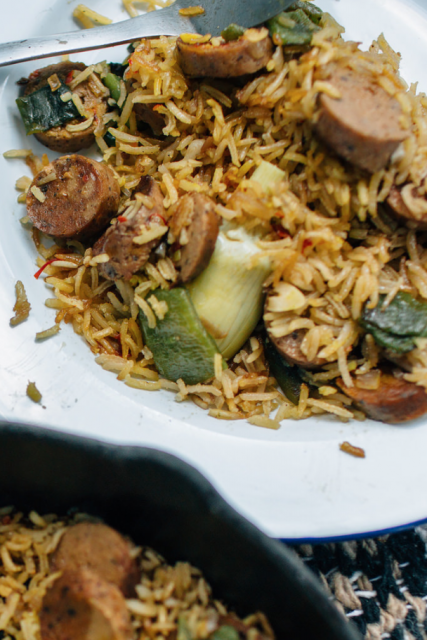 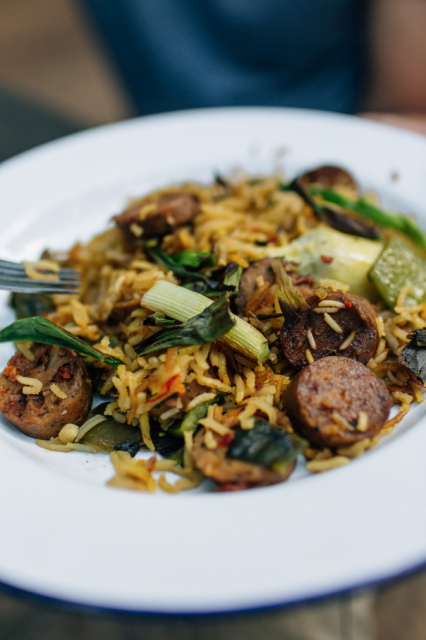 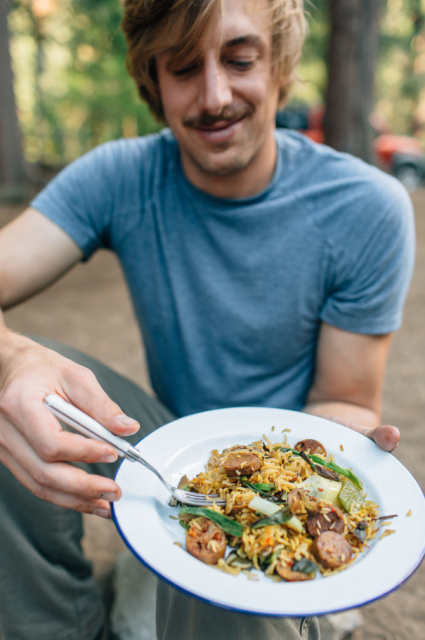 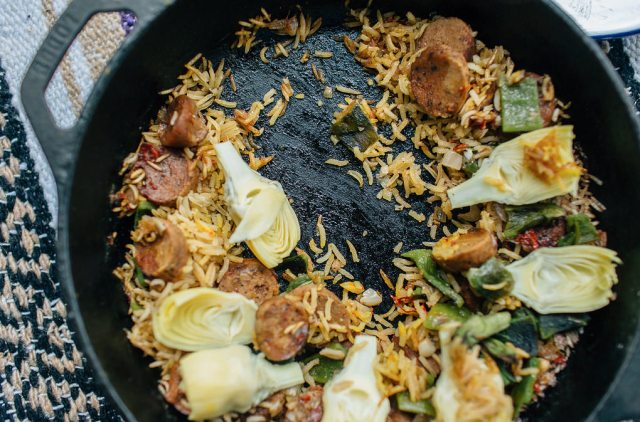 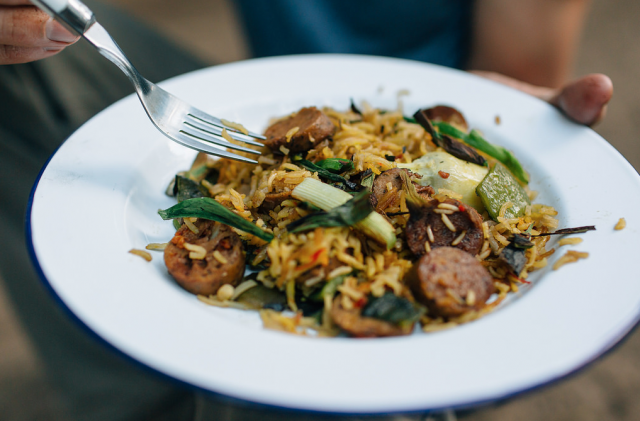 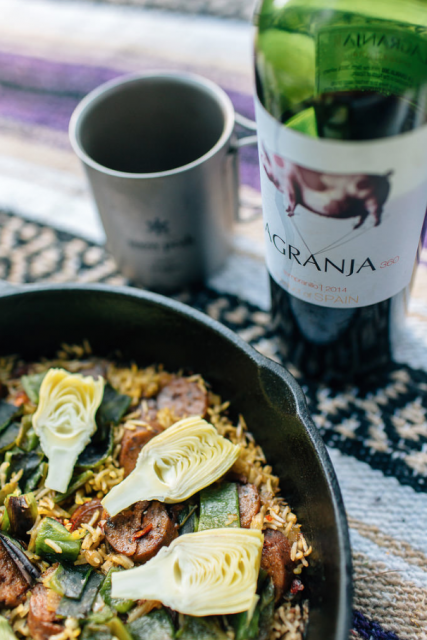