It’s common wisdom in overlanding circles that older vehicles are the smart choice for exploring remote and seldom-visited corners of the globe. Because they were built without computers, function perfectly fine without the need of fancy gizmos, and are made with virtually no plastic, it’s widely believed they’re simpler and more durable. It’s also generally accepted they can be repaired with little more than baling wire and a hammer, which is probably a good thing deep in the jungles of the Congo.

While traveling through 55 countries and covering more than 100,000 miles through Latin America and all the way around Africa, I met all manner of people driving a wide range of vehicles from shiny-new, million-dollar Unimogs to $500 beaters literally falling apart. With my eyes and ears open for five years as I moved through the Majority World, I’ve come to see this preference for older vehicles from another angle. 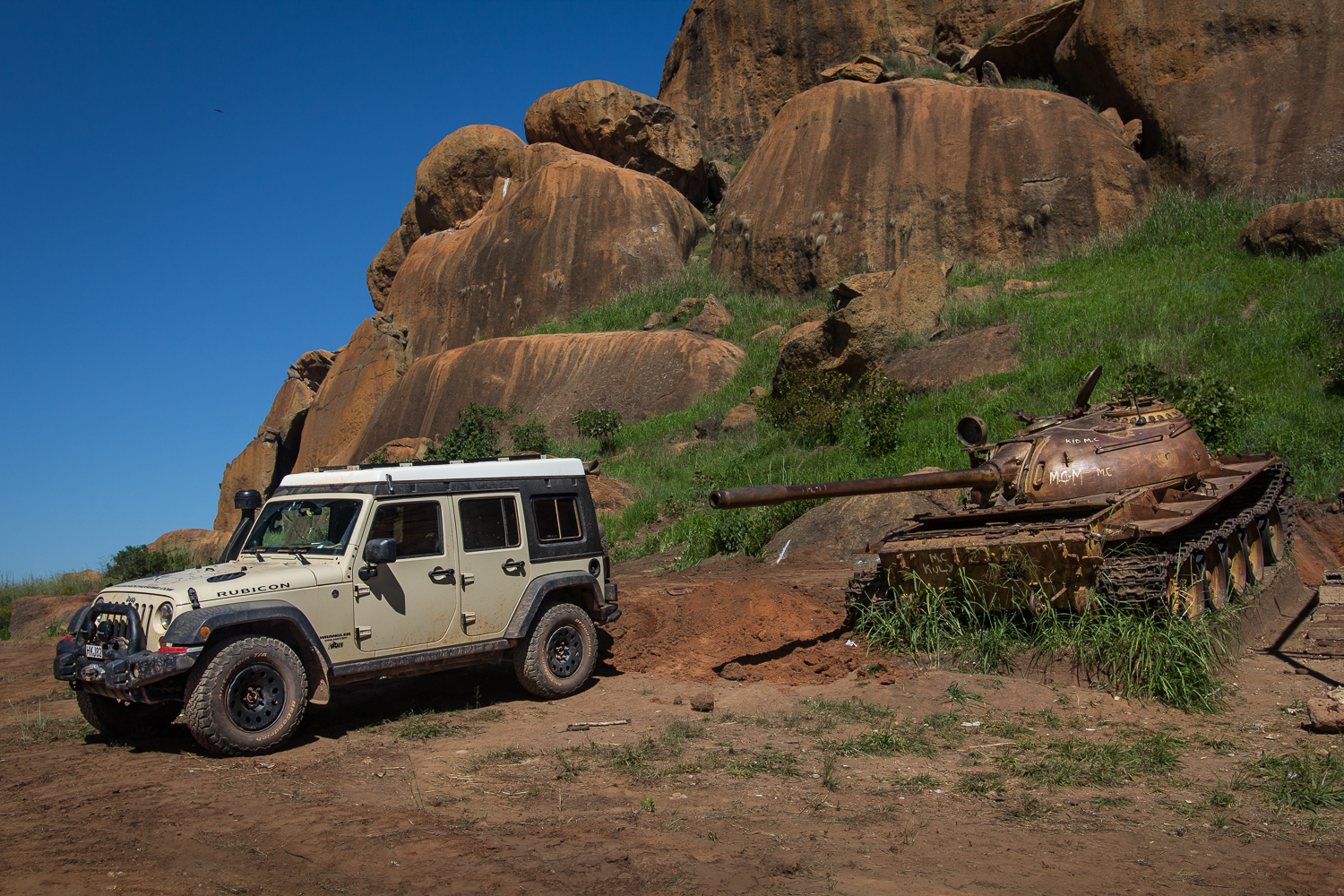 To traverse the length of the Pan-American Highway, I selected a gas-powered Jeep that was fuel-injected and only eight years old. It already had 65,000 miles on the clock when I purchased it, and after adding another 40,000 on the way to Tierra del Fuego, it still hadn’t suffered a single mechanical issue. Besides tightening the rattling 4WD shifter that was annoying me, the only wrenching I ever did on that Jeep was for routine tire rotations and oil changes. Talk about the perfect vehicle for the task at hand.

With that reliability record, I had no hesitation when selecting a bigger vehicle to circumnavigate Africa—a Wrangler Rubicon barely five years old. Built in 2011, this Jeep is heavily computer-controlled and has modern luxuries like electric windows, heated seats, and air conditioning; it’s packed with technology not commonly considered essential for an overland vehicle exploring the far-flung corners of Africa.

Because my two vehicles were designed and built within the last 10 years, they benefit from modern engineering and construction, and they’re not old enough for anything to break or wear out.

In Africa, I bumped into Ed, a friendly Australian driving a 1980’s Land Rover Defender 110 around Africa on an almost identical route to my own. On the day we met, Ed was up to his elbows in grease, desperately searching for a replacement alternator in Bamako, Mali. As I held various tools, Ed gave a rundown of the Defender’s numerous oil leaks and electrical gremlins, and I soon realized his lap around Africa had been entirely different from mine.

While I only performed routine maintenance on my Jeep, on his trip around Africa, Ed spent more than 85 long days wrenching on the 110. During the journey, he replaced the water pump, alternator, power steering pump (twice), two halfshafts, the clutch and transmission, ball joints, body mounts, and countless other bushes, bearings, and oils. As Ed says, “It’s never over with a Rover.”

No doubt it’s impressive he was able to source all those parts and keep the 110 running—though it begs the question if Ed would have spent more time enjoying his trip and less time lying under the leaky Rover if he had been driving a newer vehicle.

While it’s undoubtedly true older vehicles are easier to repair, it’s a strange catch-22 situation as they require vastly more repairs and constant attention directly as a result of their advanced age.

Not only do newer vehicles benefit from decades of engineering and manufacturing improvements, but because they haven’t been subjected to decades of heat cycles and corrosion, wear items simply haven’t had enough time to break down.

I’ve seen this story play out firsthand in Latin America, Africa, and also in North America in the form of a friend with a much-coveted Land Cruiser BJ70. Together we set out for a weekend in search of remote hot springs in the mountains of Western Canada. While the logging roads dished up dust and corrugations, I rate them a 1 out of 10 compared to what I experienced daily in Africa for three years. Nevertheless, the corrugations proved too much for the old Cruiser, and an aging tie rod end let go. Because they were designed almost four decades ago, these tie-rods ends fail completely, leaving one steering knuckle free to turn in any direction it pleases. For safety reasons, modern tie-rod ends are designed specifically not to do this, and while they may clunk and complain, they should never fail completely. Only a solid impact can induce failure in a modern joint.

Without spares, we spent the next 24 hours limping the Land Cruiser to paved roads before we could call a tow truck and begin the hunt for rare parts and someone able to repair a right-hand-drive Japanese import Land Cruiser. 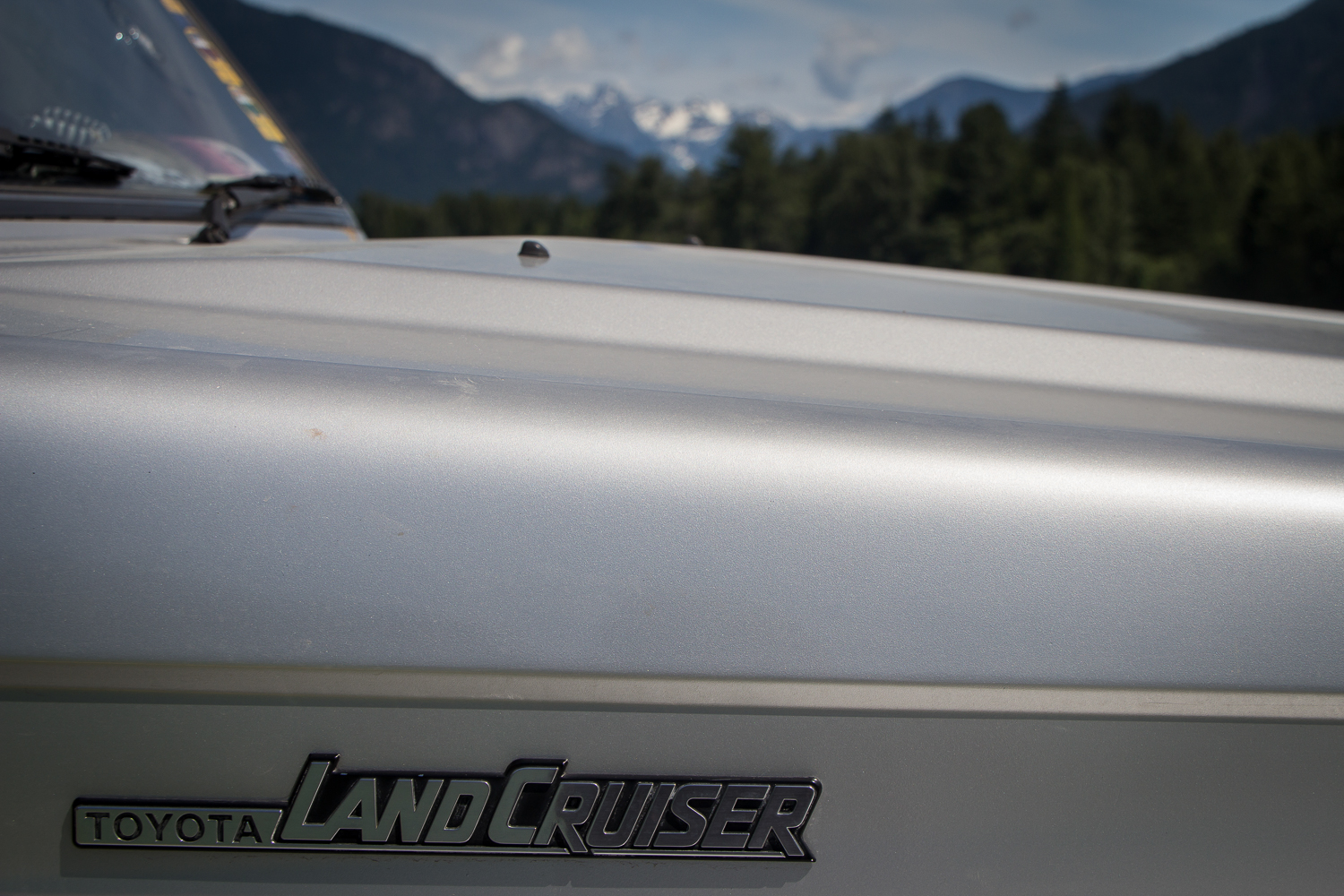 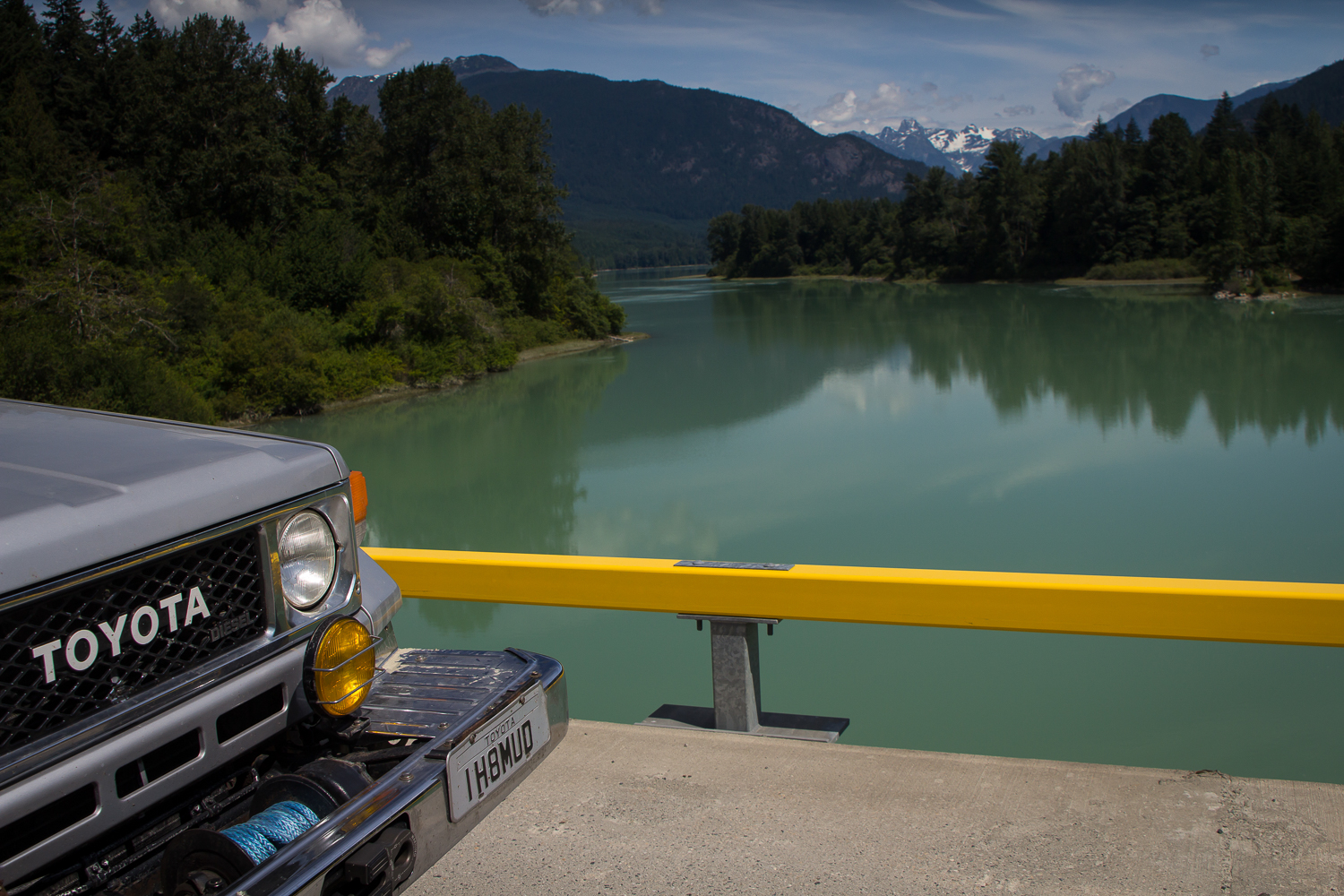 In another such example, I found myself visiting Prescott, Arizona, during the first snowfall of the year, a deluge of wet flakes that reduced visibility to a handful of feet. My Jeep and I tackled the conditions in our usual slow and steady fashion, though my friend, Scott Brady, found himself with a problem. His mighty Defender 110 suffers from the typical electrical gremlins Land Rovers are infamous for, and on that particular day, all the indicator lights went dark. Driving in thick wet snow without brake lights and turn signals is not only illegal, it’s downright dangerous.

Meanwhile, my current Jeep still has the original tie rod ends and even light bulbs after tens of thousands of miles around Africa on the worst roads on the planet. Now it’s 10 years old and has over 170,000 miles all told, but it has still never experienced the kind of issues that plague 30+-year-old vehicles. To this day, it has never suffered a breakdown of any kind. Not only does my Jeep continue forward with its factory tie rod ends and light bulbs, but it’s also still sporting the factory radiator hoses, wheel bearings, and suspension bushings. Besides those housed in museums, virtually every vintage vehicle has had those components replaced multiple times over. Meanwhile, I’ve never had to replace them in my Jeep and have never required a tow truck.

It has become common to prefer vehicles with manual windows without an engine control unit (ECU) because everyone remembers when they would fail and leave people stranded. While that may have been the case in the late ’80s and early ’90s, modern vehicles have come a long way. To illustrate this point, I challenge you to think of a vehicle built in the last 10 years that has suffered a failure of the electric windows or the engine control unit. The simple fact is that those problems were eliminated well over a decade ago.

Furthermore, with the benefit of computer design and simulation, core vehicle reliability and durability have improved leaps and bounds. While it’s quite common for older vehicles to overheat, that is essentially unheard of in a vehicle designed and built in the last 10 years.

Safety is also a huge factor that shouldn’t be underestimated or overlooked. Drivers in the Majority World often operate with a sense of reckless abandon that needs to be experienced to be believed, which means deadly motor vehicle accidents are a way of life. I’ve met a handful of overlanders who barely escaped with their lives after suicidal truck drivers caused enormous crashes. While crash safety was barely an afterthought in the tin-can 4WDs of the 1980s, my modern Jeep has four airbags, ABS, stability control, and an engineered and heavily scrutinized crumple zone. While I hope my luck continues, it’s comforting to know I’m well protected if something goes horribly wrong.

I will admit the Jeep’s heated seats are not exactly essential for a circumnavigation of Africa, though I have to say keyless entry, a factory alarm, and air conditioning are very nice to have. It is always helpful to quickly unlock only the driver’s door with a tap of the button in my pocket. And when going to sleep at night, it’s very reassuring to hit the lock button and hear the familiar clunk of the door locks.

On more than one occasion while parked in a city, I intentionally triggered the alarm by remote when teenagers got too comfortable sitting on the front bumper—an apt reminder to anyone nearby that the vehicle had a functioning alarm. 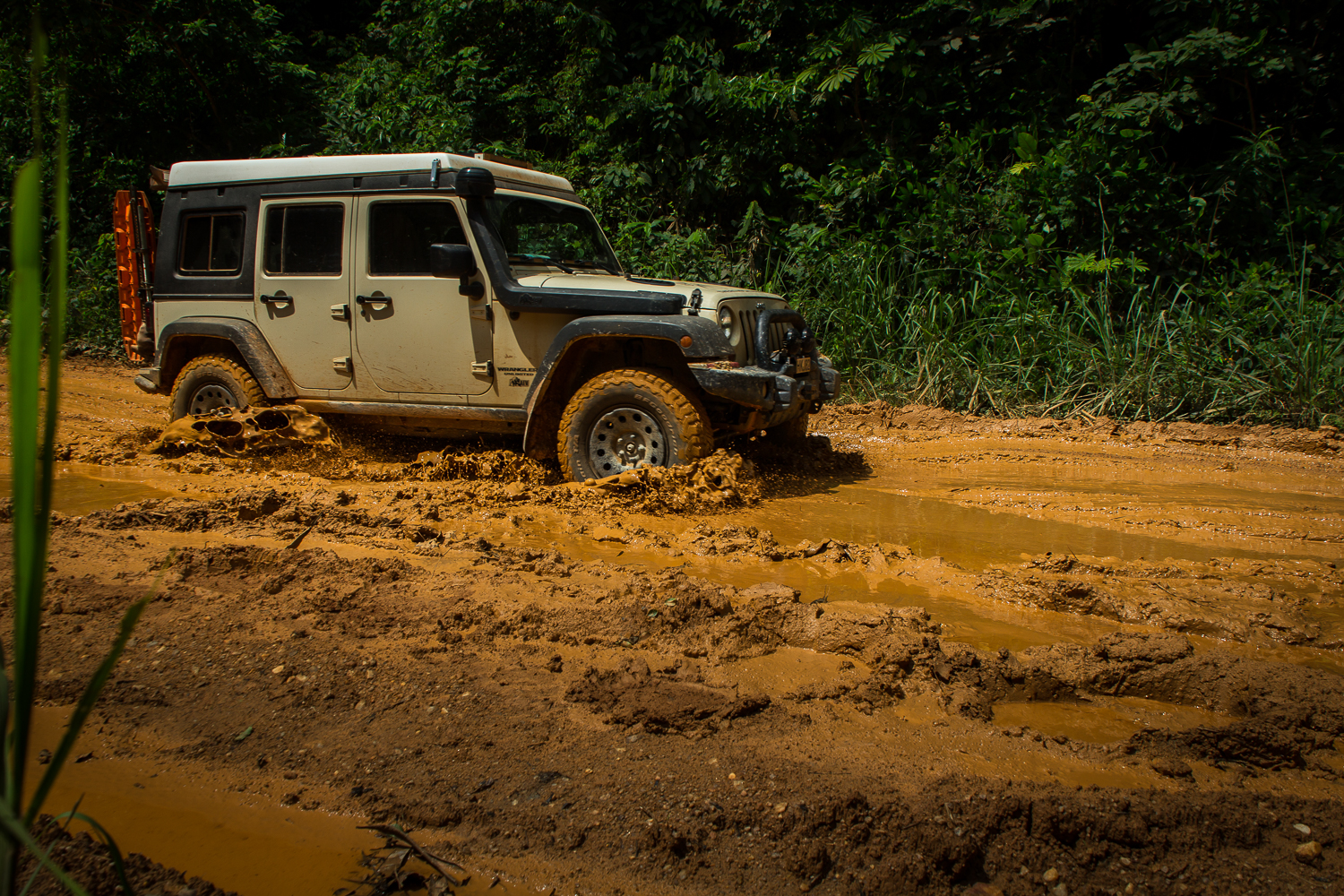 When driving into an overlander campground or hangout, it is always easy to spot the drivers battling constant vehicle problems—their first question is not where I’m from or where I’m headed—but where do I source parts for my not-so-common Jeep. They never seemed to like my reply. The answer is I just didn’t need to. My Jeep never broke down, and I only once turned a wrench for anything other than routine maintenance. I distinctly remember one couple in Peru asking if I had trouble running out of T-shirts. Not following them, I asked for an explanation, and they had to admit lying on the ground under their vehicle was a daily occurrence, and it had become impossible to keep their clothes oil-free.

While I’m sure this debate about old versus new will continue for years to come, we only need to examine the vehicles chosen for the world-record-setting Expeditions 7 around-the-world endeavor. With the ability and resources to select any vehicle on the entire planet, the team decided to drive modern computer-controlled vehicles straight off the showroom floor. It’s no surprise they never encountered a single mechanical issue while crossing all seven continents.

Think long and hard about how you want your trip to be defined: lying in the dirt wrenching on your vehicle or eating street food and bantering with locals about the price of a cold beverage. We should all think twice before romanticizing old vehicles that are extremely expensive and difficult to legally import into North America. It is almost a certainty an old vehicle will require more repairs and constant attention than the newer one already sitting in your driveway.

Dan Grec is an adventurer, snowboarder and photographer based in Whitehorse, Yukon, Canada. Growing up in Australia gave Dan a passion for travel and exploration, and years of family road trips around the continent re-enforced that passion. In 2011 Dan set out in his Jeep Wrangler and drove 40,000miles from Alaska to Argentina, passing through some 16 countries over 22 months. You can connect with Dan, and learn more about his developing adventures at: The Road Chose Me