We quickly understood Norway was going to be the country for us.

Once the capital, Oslo, passed, the road started winding through the mountains. There is no rest in this country. The roads go up and down at the rhythm of the valleys. Someone told us, “In Norway, the roads were built following the cows.” On the southwestern coast, the land of the famous Norwegian fjords begins. Imagine huge mountains falling abruptly into grey, cold, and narrow sea arms—we are talking 600- to 900-meter high cliffs. There is little space left for men in this extreme topography. The roads are magnificent; the hikes are breathtaking. 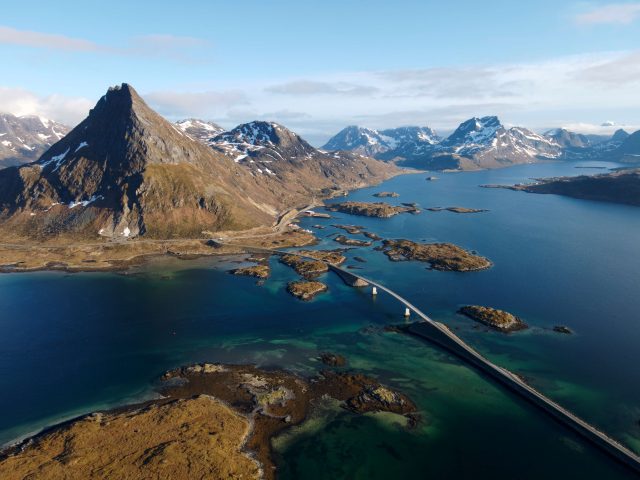 The Lofoten archipelago looks like endless sparkles of land in the Arctic sea. But do not let yourself be fooled; even at these latitudes, people live permanently up there. Education and health services are still guaranteed, even if it means building a bridge for two or three farms on an island. 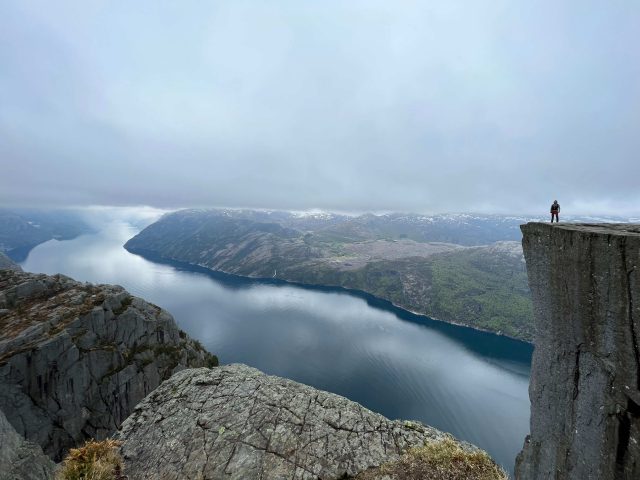 Lysefjorden is the first of the grandiose Norwegian fjords we got to discover. Around the corner of a hike, suddenly, it was there. We fell immediately very small and fascinated. What is even more fascinating is that there are dozens in the country.

We engaged always more north; at these latitudes, the spring weather is like a toss of a coin. One continuously travels between spring at the bottom of the valleys embellished by blooming apple trees and winter in mountain passes covered under 3-meter-high snow walls surrounded by frozen lakes. As we drove north, it began to get cold, but after weeks on the road, we are now well accustomed to life in the 4×4. In the summer, tourists and mosquitoes take over, and it can get overwhelming both for the visitors and the locals. Visiting Norway during the early spring, we had the opportunity to see these breathtaking landscapes in a more intimate way and find wild camping sites even in the most touristy regions. The downside is that some roads are still closed due to snow, and you will need to hike on snow to reach some of the most famous viewpoints. Overall, we do not regret traveling so early in the season and would probably do it again this way.

As we passed the latitude 66°, we officially entered the Arctic Circle and were surrounded by snow and small birch trees scattered in the plains. We saw our first reindeer on the road licking leftover salt on the slushy tarmac. It was mid-May, and our impression was that we had reached the true north. There is no more night; we wake up at 2:00 a.m. in broad daylight. In Bodø, we hopped on a ferry sailing to the extreme western point of the Lofoten archipelago— imagine alpine peaks dropped on sand beaches. It’s a must if you come to Norway. Especially for its grandiose hikes above the cold waters of the Arctic. While many told us it was far north as was worth going, Lofoten’s northern sister islands, Vestragren and Senja, offer great beauty and a wilder set of amazing landscapes that you only share with a few local fishermen.

Eventually, summer switched on at the North Cape. After five weeks, hundreds of tunnels, and 7,000 kilometers on the road, it is under the sun and in 15°C temps that we made it to the northernmost point of the European continent. In just a few days, the icy roads and the cold fog described to us by travelers coming from the north were replaced by a bright blue sky and warm, 24-hour-long sunshine. In front of us, a clear horizon opened from the edge of the cliffs standing 300 meters above the Arctic Ocean. The midnight sun shone orange rays low on the horizon, and the cold wind from the sea reminded us that it never gets much warmer around here. It was time for us to take the road back south. 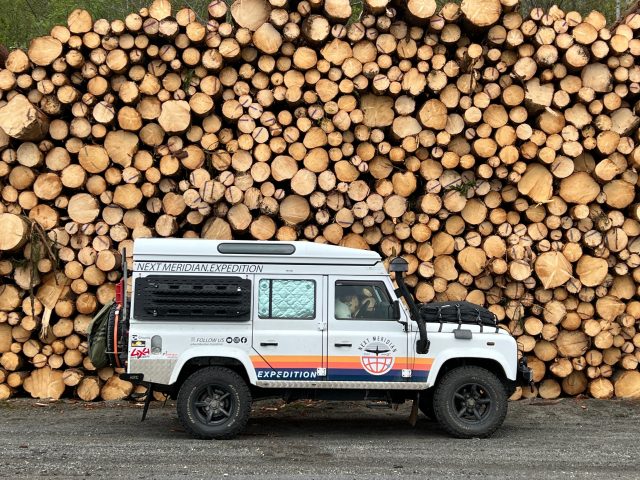 Timber is a traditional and important industry in some parts of Norway, Sweden, and Finland. Anyone need firewood? 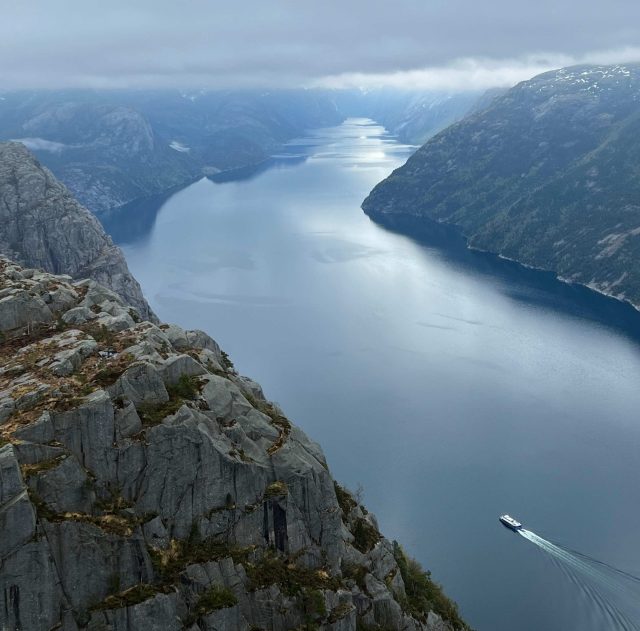 Preikestolen is this mystical rock platform suspended 600 meters above Lysefjorden—it’s just another Norwegian landscape used many times as a movie set. It is not the only breathtaking hike in the area. There are three types of visitors: the ones that look from far away to take the picture, the ones that stand on the edge to get their picture taken, and those who run and do a base jump of it. All three types get their dose of adrenaline. 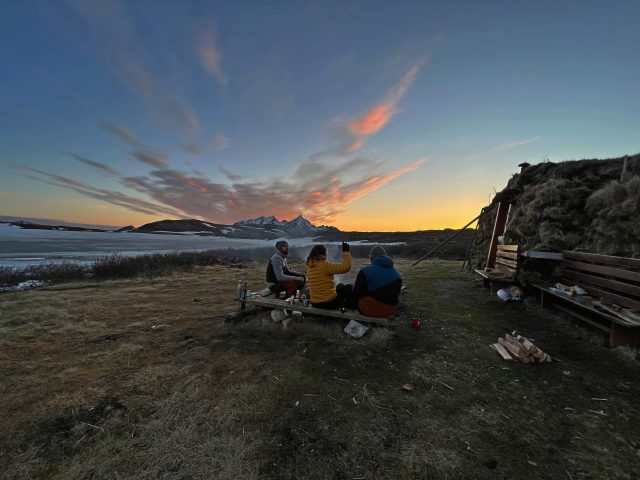 One day, someone gave us GPS coordinates and told us, “This is the location of a secret cabin,” a dot in the middle of nowhere in the Lofoten. We liked the mystery of the offer, packed our bags, and invited two other travelers for this intriguing expedition. Quickly, we lost track of any trail, and cutting straight into the snowy slopes, arrived at what we ended up calling the cabin in the sky. In the picture, it is 2:00 a.m. We had burgers on the fire for dinner and had the most exceptional shelter for the night. 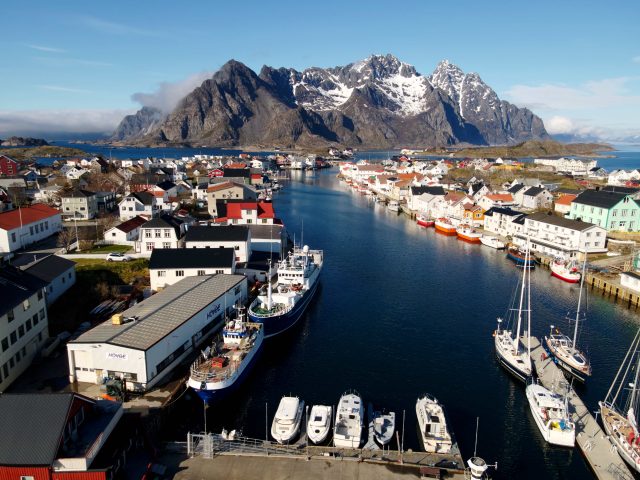 Henningsvær is probably the most famous village of the Lofoten. It is interesting how such sets can seem so normal in coastal Norway and so exceptional to visitors. 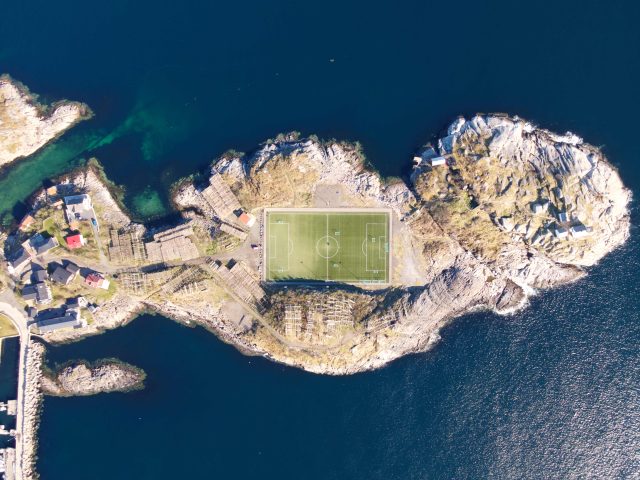 This is probably one of the most scenic football fields in the world. But in the end, it’s just a local football field surrounded by smelly drying cobs. We would not want to have to collect the lost balls. 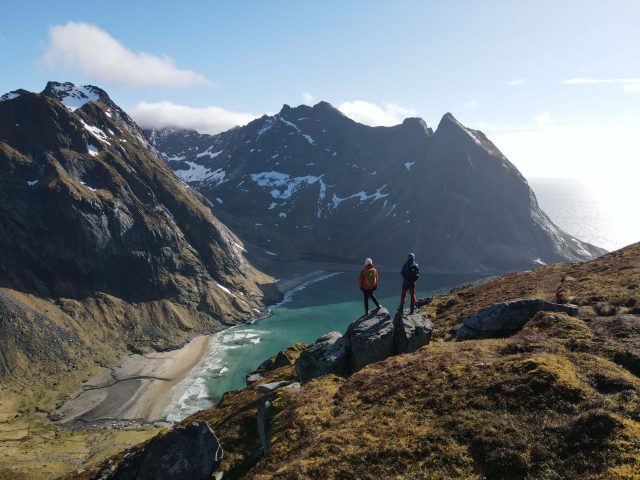 Ryten is probably our favorite hike of the Lofoten—you get the best panorama on the archipelago. Imagine someone has collected Alpine summits, kept only the top 600 meters of them, and dropped them on sandy beaches in the Arctic Ocean. On a sunny day, one can see to the tip of the archipelago. 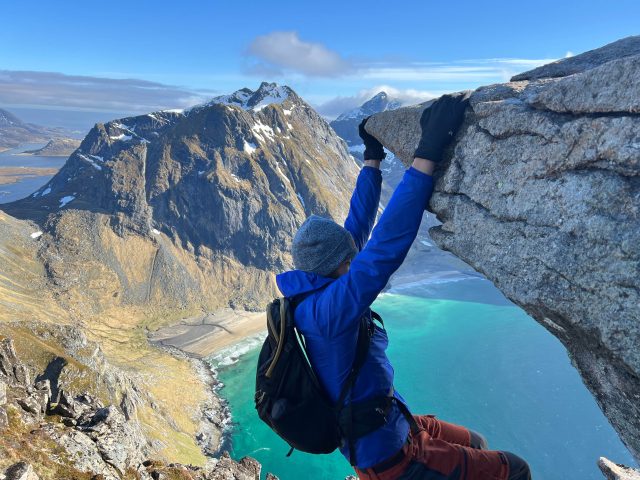 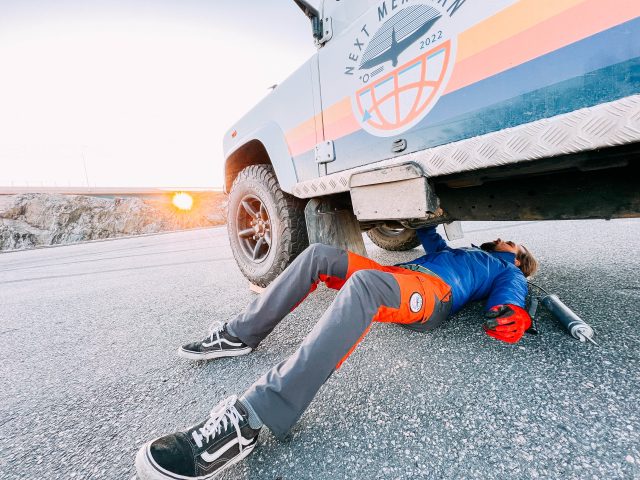 Not being trained mechanics, we try to be diligent with the vehicle’s maintenance. Slowly, slowly we learn. That day, on a parking lot next to the ocean at sunset, greasing U-joints. How romantic is that? 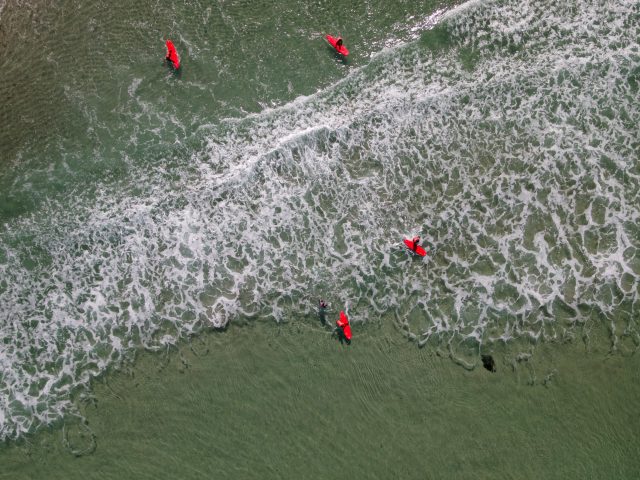 Unstad beach is home to the self-proclaimed northernmost surf shop on earth. Surfing in cold water like those was only made possible recently with the invention of new types of wetsuits. In Unstad, we found beautiful beach break in glacial arctic water. In summer, the 24-hour-long days offer endless sessions; in winter, some brave, passionate, cold-water surfers make use of the short daylight to surf with a snowy mountain background. Not your usual sight. 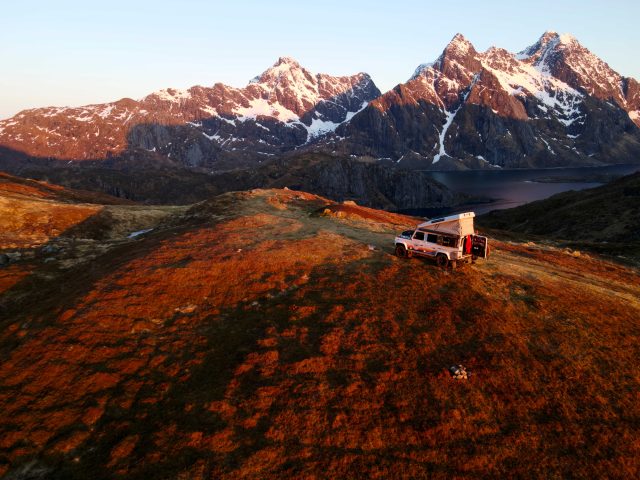 If you asked us to draw the perfect wild campsite in Norway, it would probably be of this one in Unstad, a sandy beach in the middle of the mountains. To get there, we climbed the old road previously used to access the beach before the modern tunnel was made and parked the Defender right on the mountain pass dominating the bay. 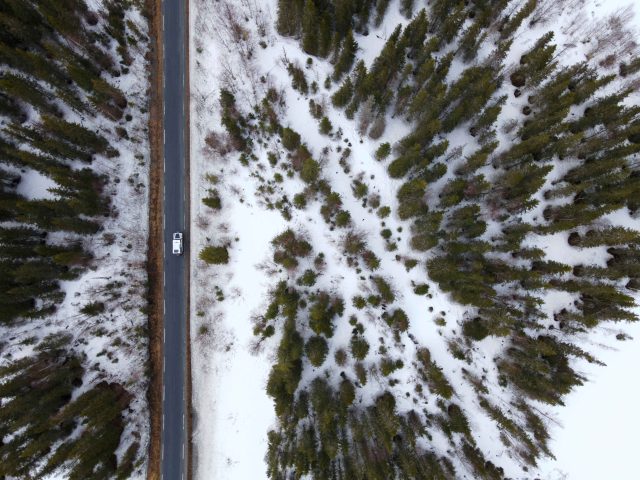 We decided to take Highway E6 which connects Trondheim to the north of the country. We drove on that thin land section stuck between the Atlantic Ocean and Sweden. This is where we understood the country was much bigger than we had imagined. In two days, we progressed from latitude 63 to latitude 69, crossing the Arctic Circle line on the way. 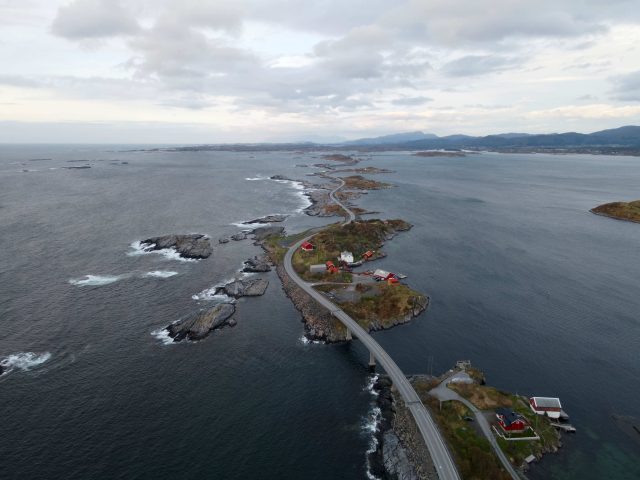 The Atlantic Ocean Road (or Atlanterhavsveien for the locals) is a section of 8 kilometers comprising eight bridges constantly exposed to the Atlantic raging wind and waves. On top of being one of Norway’s most famous roads, it was in the last James Bond movie. 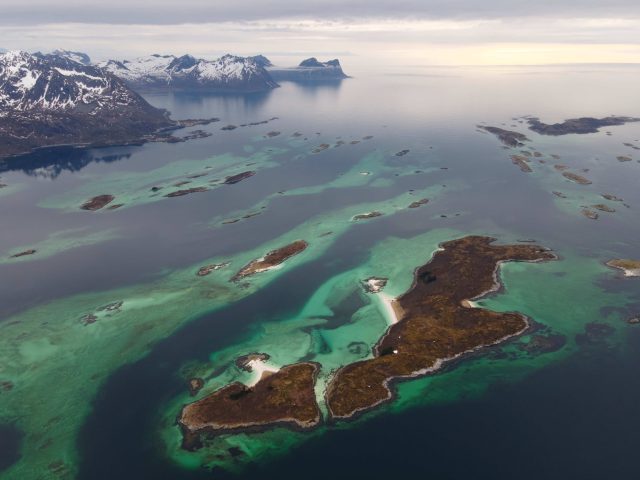 Off the shores of the island of Senja, somehow, you can find the Seychelles. Or, to be more exact, the Bergsøyan archipelago. It is almost 70° latitude, and as we were hiking in the snow, we could see those turquoise waters and white sand beach in front of us. A glitch in the Matrix?

Nick and Mathilde launched their World Tour in April 2022, the Next Meridian Expedition. The plan is three years, seven continents, and 88 countries in their fully transformed Land Rover Defender 110, aka the Albatross. After spending most of his life between Asia and Africa, Nick worked for a French tech start-up based in Paris. Mathilde, originally from the French Alps completed degrees in international relations before working several years for the United Nations based in Brussels. The French-Italian couple has always traveled together (their first date revolved around a road trip), but they only recently moved to a full-time overlanding lifestyle. They document the Next Meridian Expedition project on Instagram and YouTube in addition to publishing regularly in travel and overland magazines in French, English and Italian.