I’d never heard such thunder, and it was getting closer—I could feel each crash reverberate in my chest. It was like enemy mortar shells finding their range. Then there were the punches of lightning, so close they seemed only feet away from my rooftop tent. Maybe the tires on my ’99 4Runner would insulate me. In any event, there was nowhere to run, so I did what anyone would do: I zipped up my windows and went to sleep. 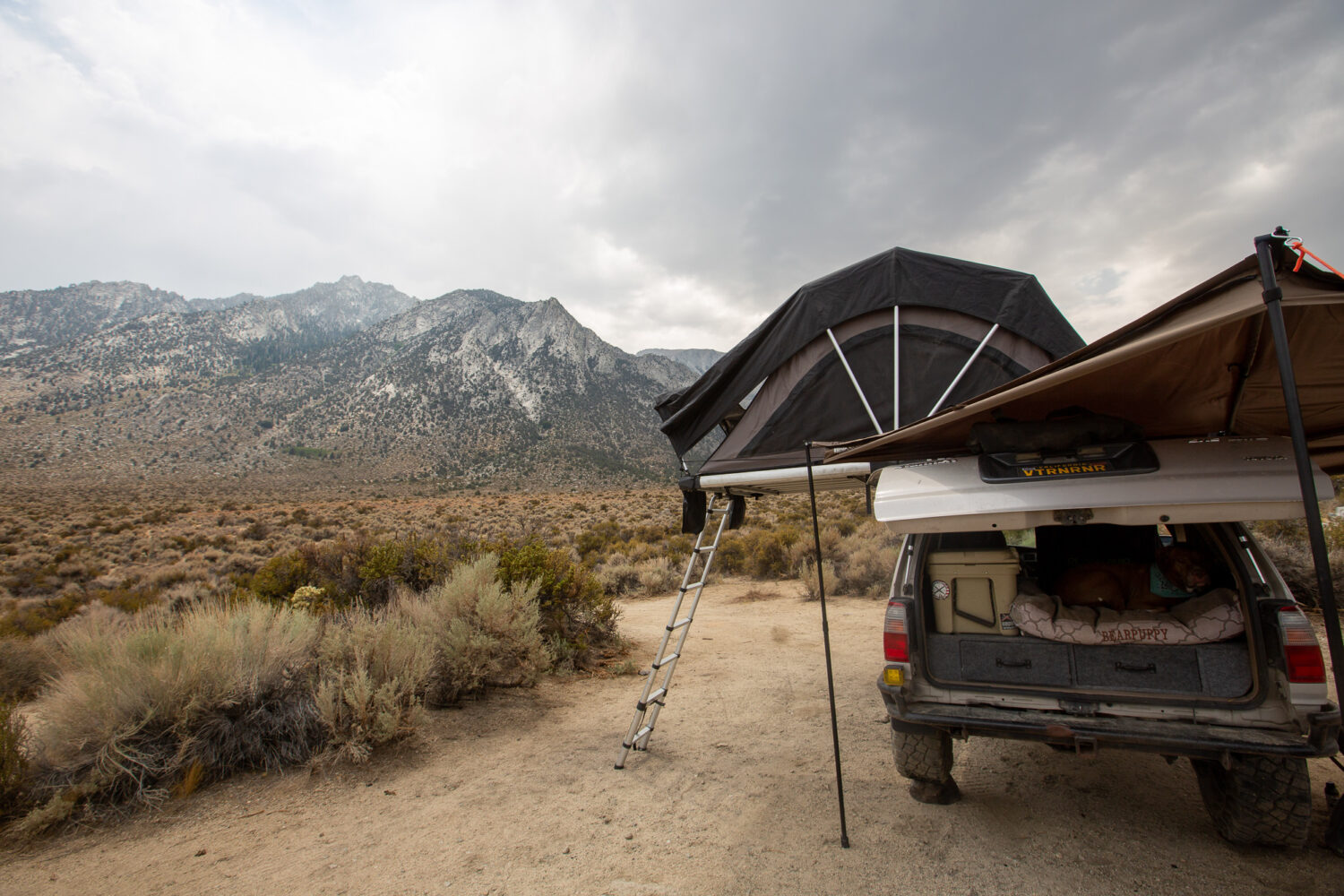 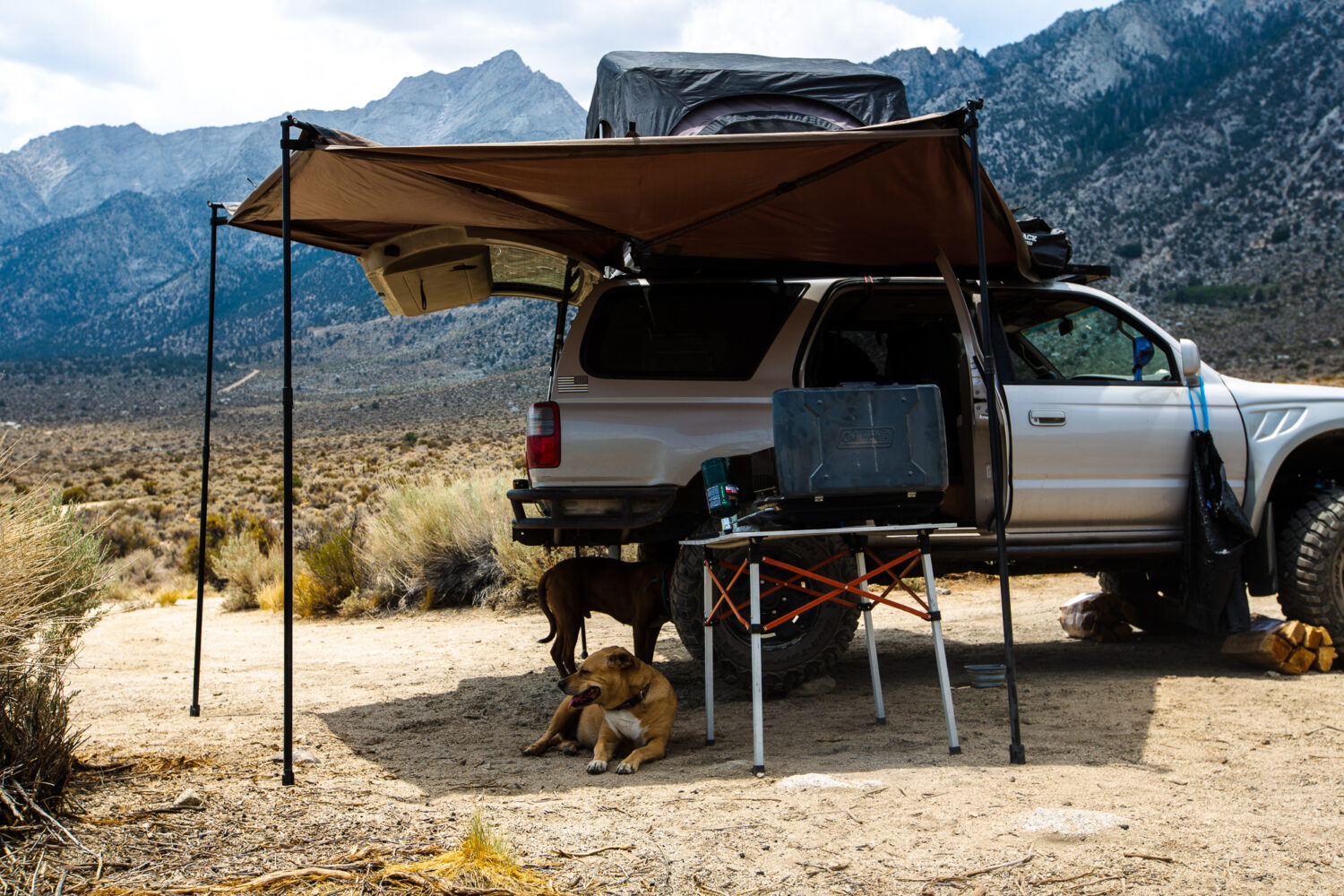 If I was going to be struck by lightning, I didn’t want to see it. This trip was supposed to be a relaxing weekend at the base of Mount Whitney, one of my go-to spots since I’d retired from the Marine Corps. I’d spent five days brainstorming in my journal, snapping random photos with my Canon, and taking in the sunsets. My two dogs were there with me, so I’d loafed around with Bear and wandered the trails with Puppy. 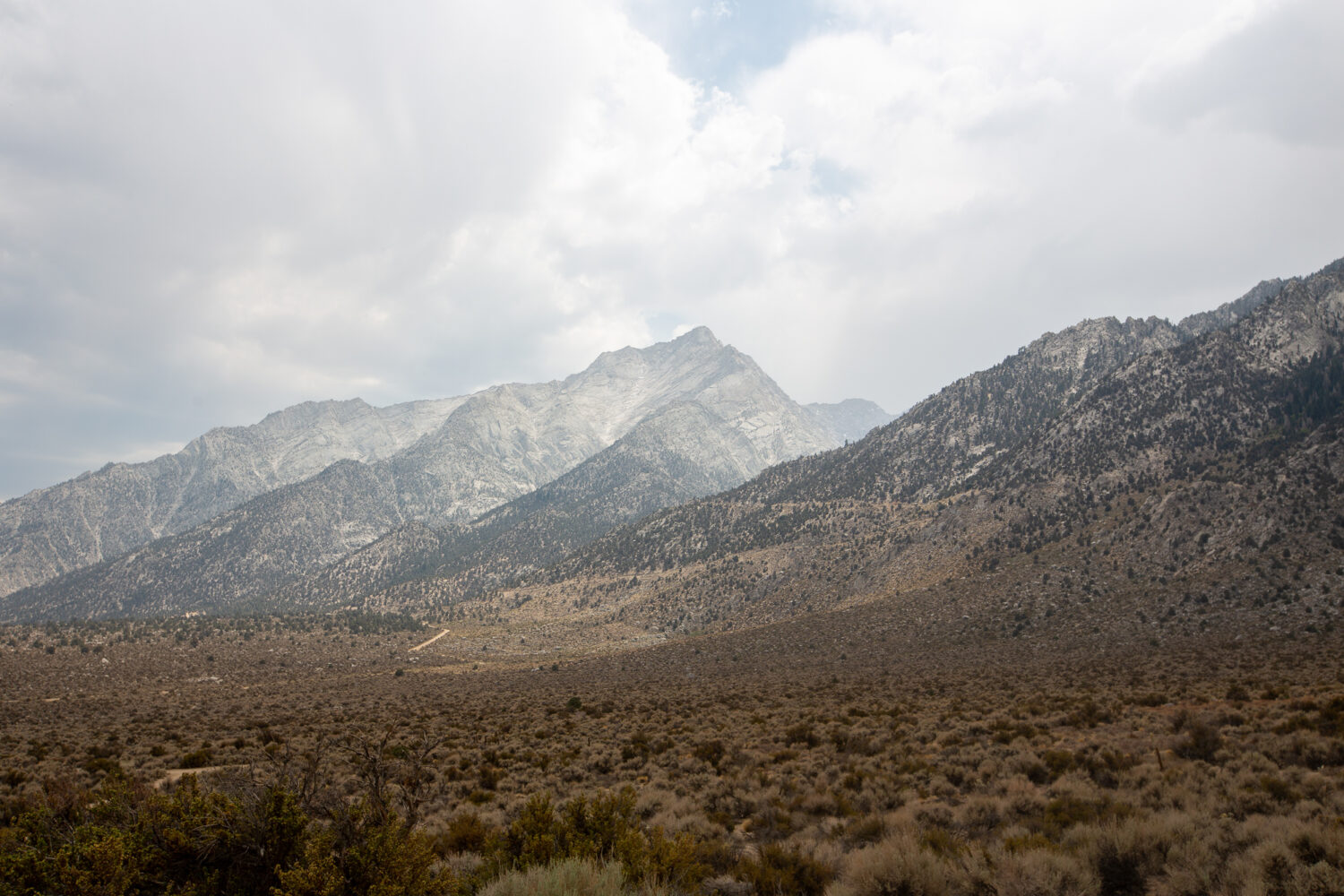 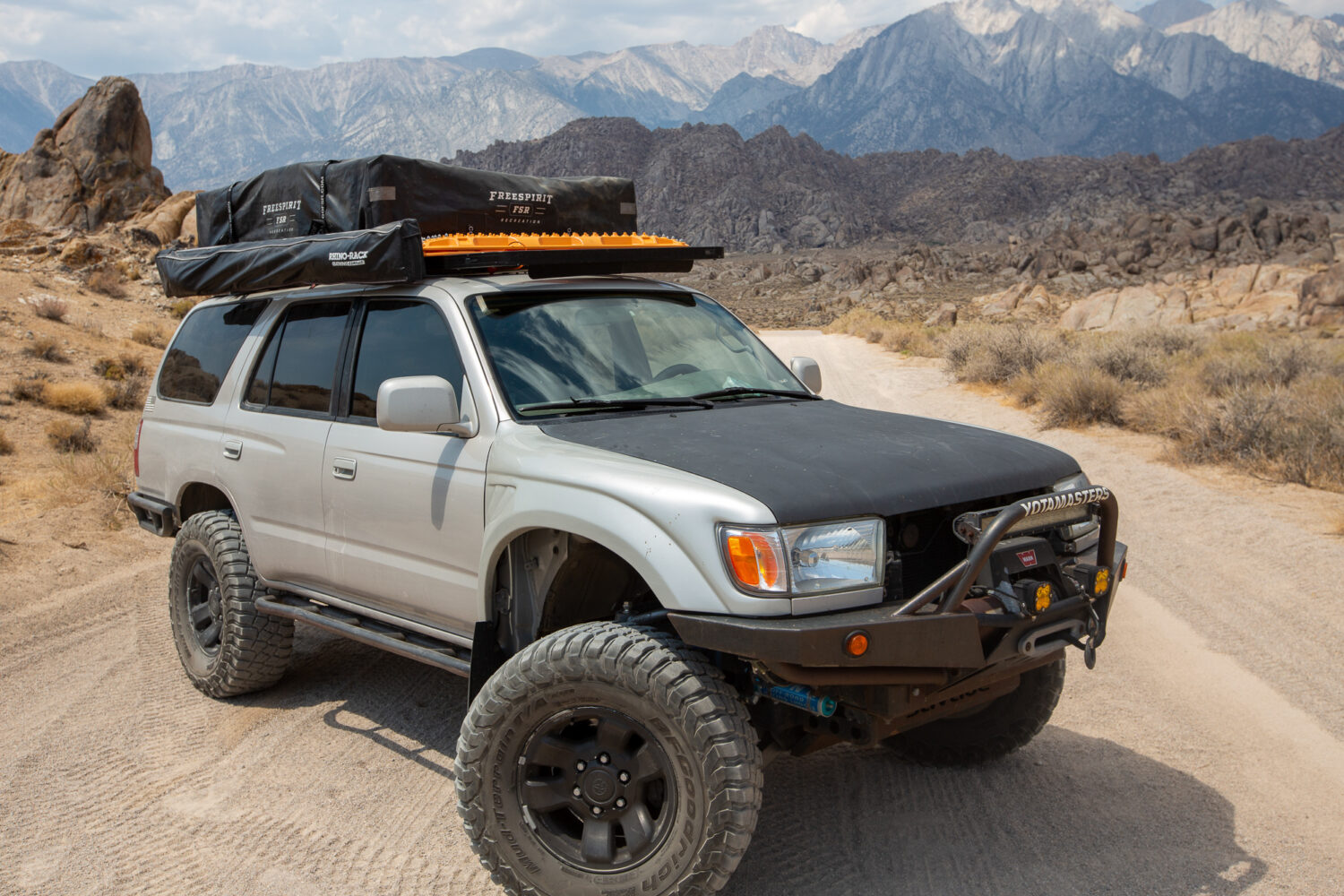 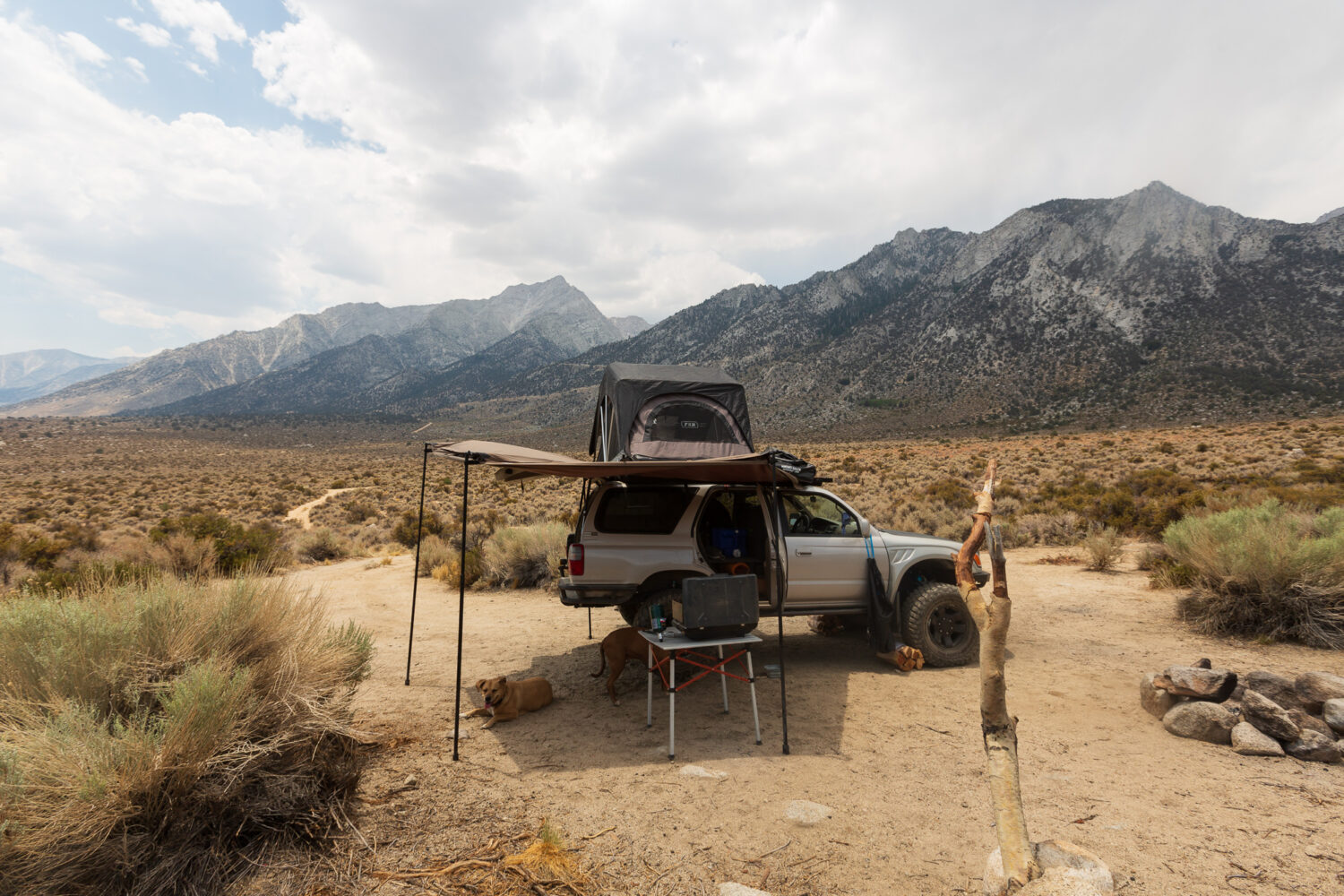 At 3 a.m., I woke to the pleasant smell of barbecue. I sat up in the tent, unzipped my window, and looked around in the dark. Fifty feet away, on the far side of the creek, a small fire glowed in the brush. The lightning bolt must have barely missed my campsite. I got out and climbed down to the ground to reconnoiter. When I turned around, the flames were now as tall as a pinyon pine. I laughed out loud. Was it even possible that it could grow that fast? It was my cue to fall back. 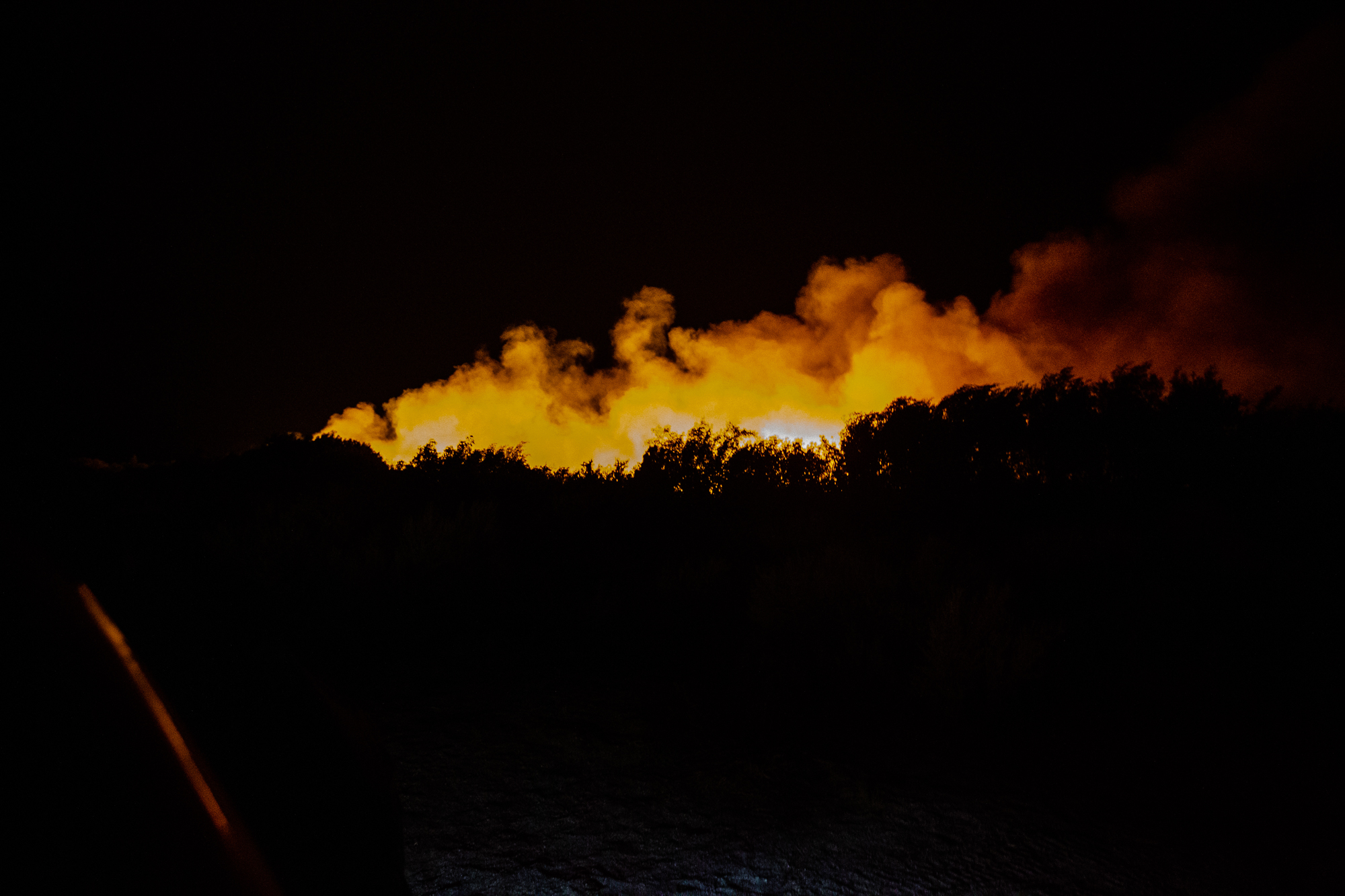 By the time I’d removed enough gear from my tent to close it—the fire was at the creek’s edge and growing fast. Airborne embers stung my eyes. The dogs, still in the back of the truck, snored in a heap on their heated blanket. It was clear I hadn’t raised watchdogs.

I let sleeping dogs lie and grabbed my camera. I wanted to be a writer, and maybe this would make a good magazine piece. 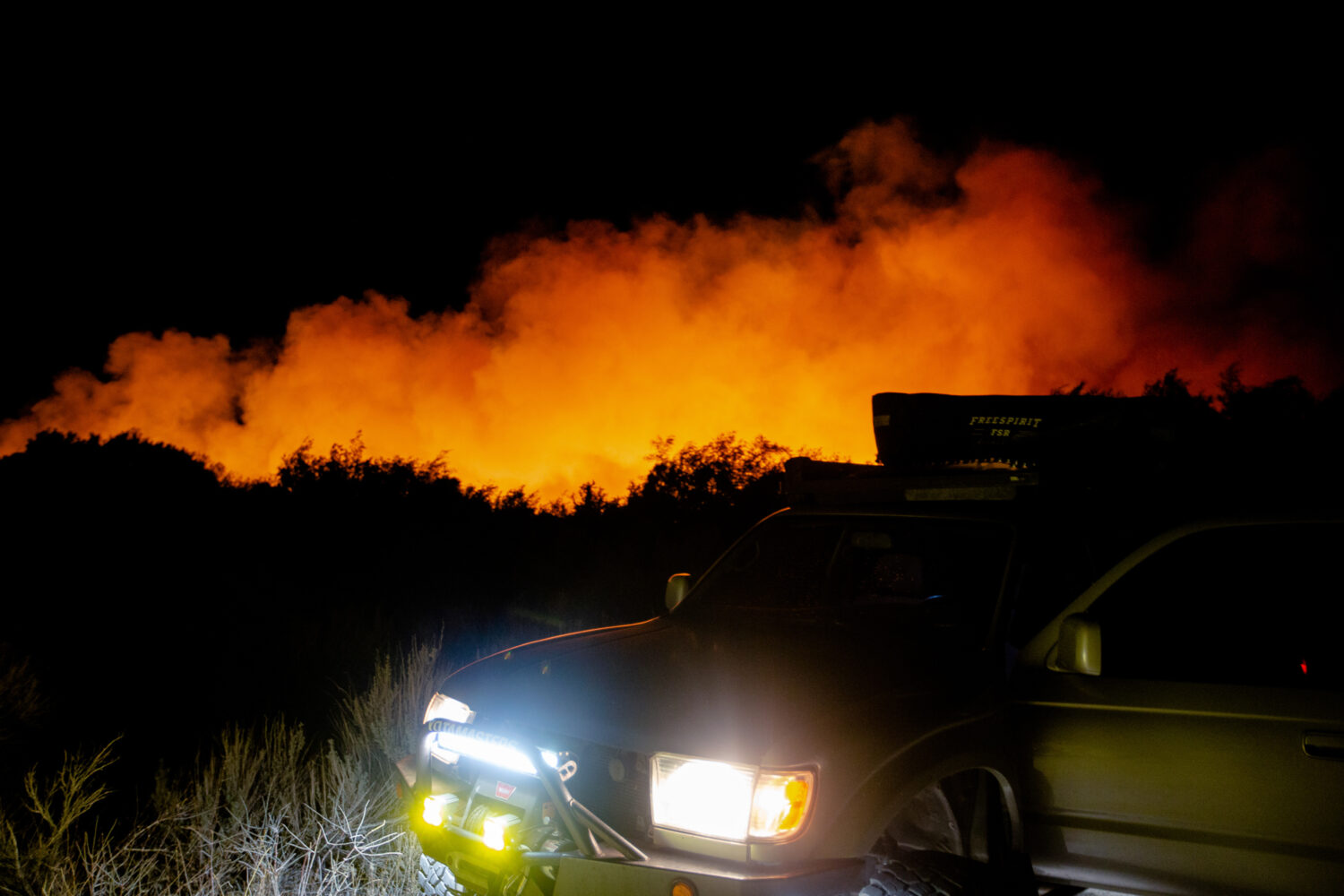 Earlier that day, a family of three in a Ford F-150 had passed my campsite. That same truck now careened down the road in my direction, high beams bouncing through the smoke. It fishtailed to a stop next to my truck. The driver barreled out in full nighttime dad attire—a damp oversized white tee with a stretched-out neck, roomy sweats, and slides.

I put the camera back in the truck where he couldn’t see it. I didn’t want to feel like, well, the kind of writer who grabs his camera, risking his life to film an emergency.

“Hey, bud,” he shouted. “You good?” I straightened up and told him I was fine. A tired-looking woman watched us from the open passenger door. A little girl, maybe seven, climbed out, ran past her, and clutched the man’s leg. “Daddy,” she asked. “Is that man okay?”

I assured her I was. I told them I’d be fine. Honestly, I just wanted them to leave, so I could get a few shots before the fire jumped the creek.

“It’s just—we were watching from up there.” The man jabbed his thumb in the direction they’d come from. “Your site got struck like seven times.” He stared at me as if wondering what the holdup was. “You know, this is dangerous,” he said. “We shouldn’t be dilly-dallying.”

There was nothing I could say without looking like an idiot. He was genuinely concerned, and he wasn’t going to leave until he knew I was in tow. I got in my car and started it up. 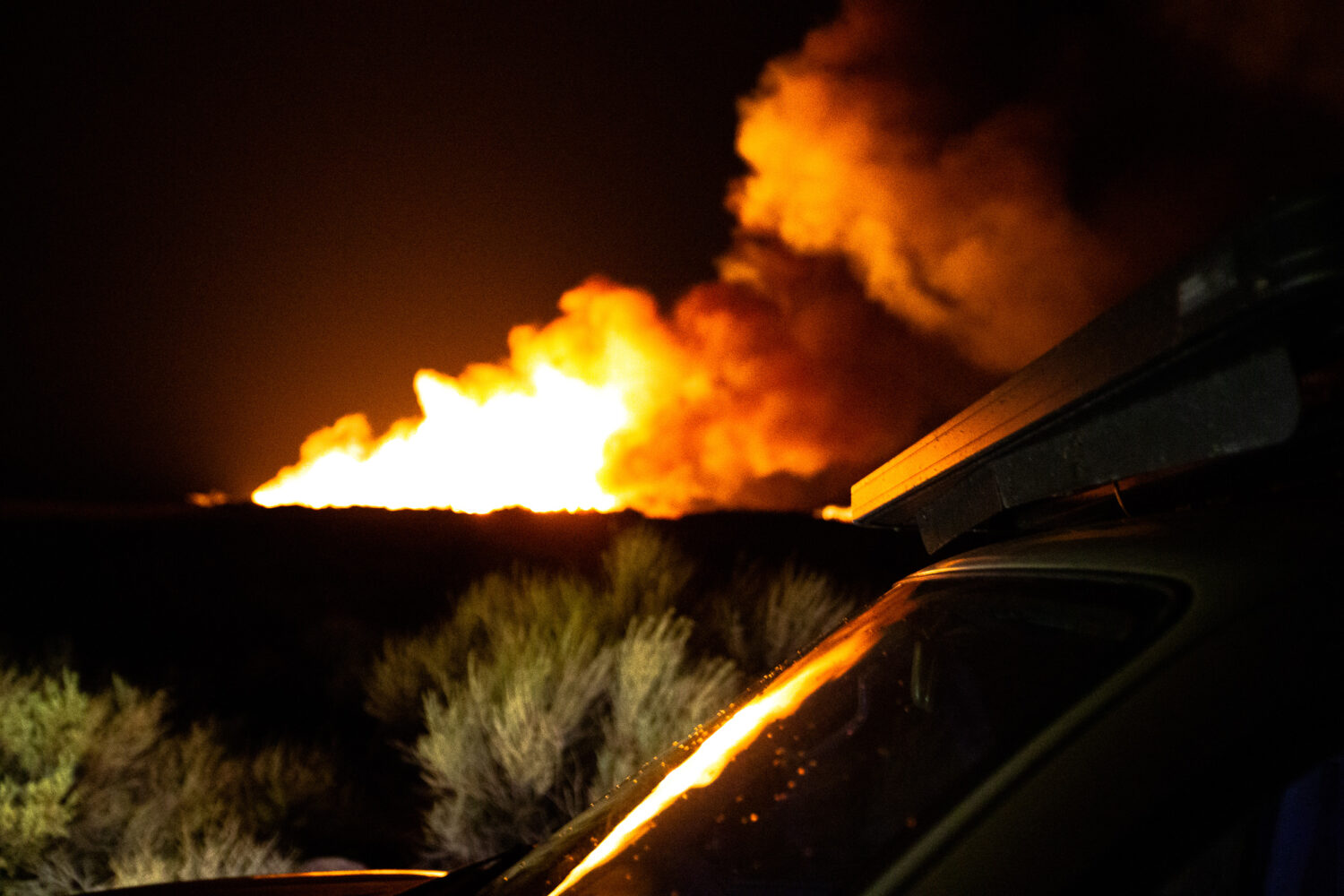 The dad got in his car. I put mine in gear; he put his in gear. He clearly wasn’t going to move until I was rolling, so I gave it a little gas. As soon as I did, he floored it down the mountain. I watched his taillights disappear into the dust and put my 4Runner back in park.

I jumped out, focused my camera, and snapped as many photos as possible, as if I was viewing an objective. It looked pretty impressive in the viewfinder—a squall of livid flames in the darkness. I got back in the car, satisfied, and got the hell out of there.

A few hairpins down, a fire command SUV was coming up the road. When he got even with me, he rolled down his driver-side window, so I did too. He seemed vexed. “You didn’t have a campfire, did you?” I got the feeling he wanted to climb out of the SUV and throttle me.

No, it was lightning; I swore it. He nodded and let me pass.

On the way down to Highway 395, a parade of sedans passed me coming up—old Subaru hatchbacks and Hondas with bald tires. It took me a while to realize who they were, volunteer firefighters—workaday mechanics and carpenters and line cooks—gritty locals whose backyard was ablaze.

I was free to head down the mountain and hit the highway. I’d sleep in my own bed that night. These guys were heading up to help evacuate, dig trenches, and keep things from getting out of hand before the wildland fire engines arrived—a job that was probably becoming far too familiar. With drastic changes to our climate, fires like this are nearly as commonplace a concern as rattlers and bears. We overlanders need to be prepared for them. 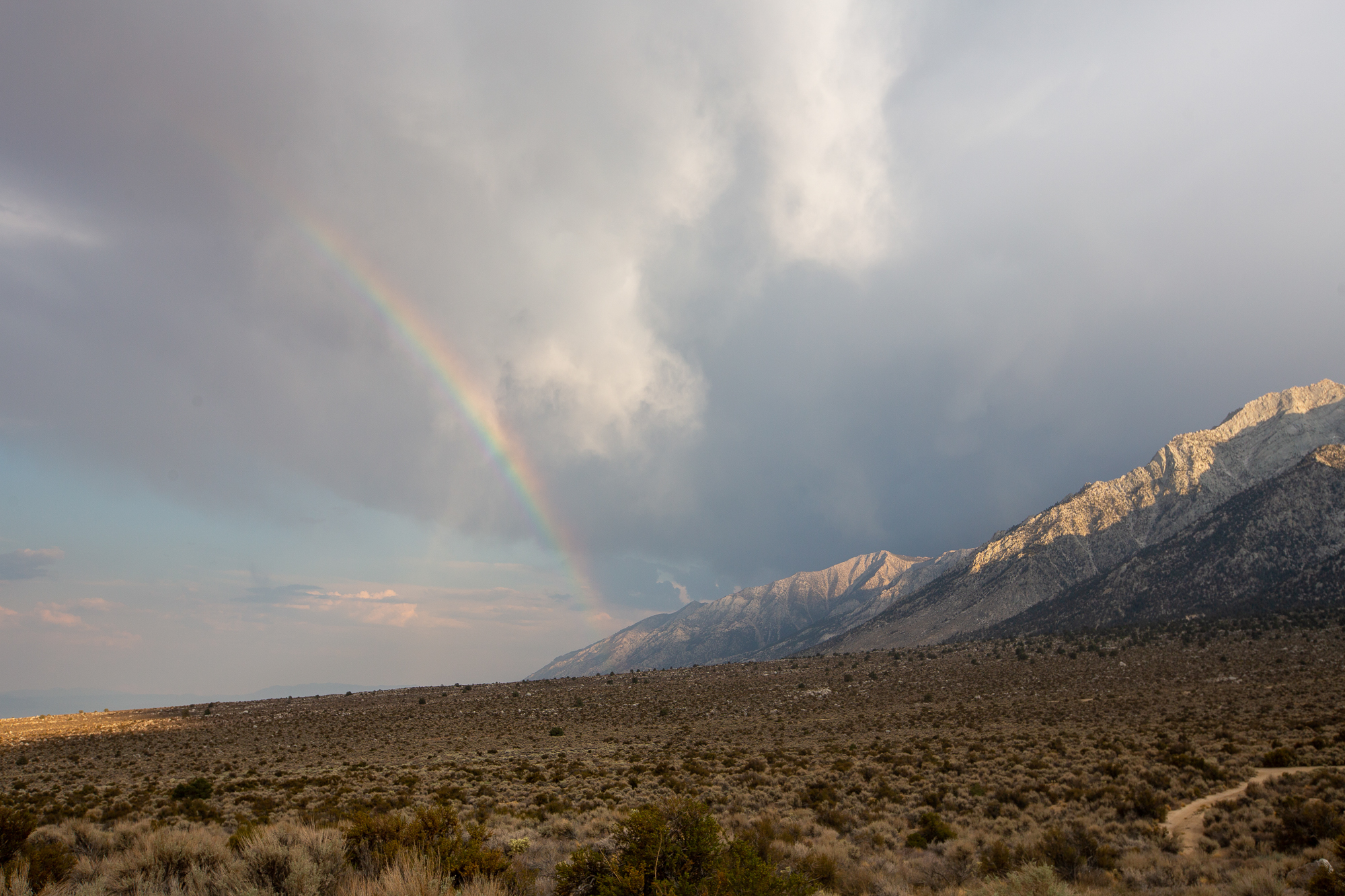 In the final tally, that fire consumed 560 acres and took three days to contain. That made it small potatoes. The following month, the Dixie Fire would charr nearly 1,000,000 acres in California.

I stopped at a Chevron station down in Lone Pine to fill up. It was lively for three in the morning since the siren had sounded. A ring of young women stood in front of the newspaper machines, drinking Red Bull and chatting. Their children chased each other among the stacks of firewood. Volunteers were arriving from all over—and these were their families.

When my tank was full, I went inside the convenience store to buy Sour Trollis and some black coffee. I took them up to the counter and the attendant told me that coffee at this hour was free. Small wins.

As I walked out to my car, the disheveled dad pulled up in his pickup. His daughter pointed at me. “There’s that man, Daddy!” she shouted.

While he filled his tank, we talked about our plans. I was heading home. He and his family were on their first night of a week-long camping trip. They’d just move on to a new location. Everyone else—the volunteer firemen and the waiting women and children—would be choking on smoke and stamping out embers for a few days.

It occurred to me, only then, that I hadn’t checked on Bear and Puppy. I cupped my hands and looked through the back window—the two of them were still sleeping.

I'm a recently retired Reconnaissance Marine with 13 years of service. I was born and raised in Cleveland, Ohio, and now reside in Dana Point, California with my wife and two dogs. Currently, I am a full-time student earning my degree in English. I'm pursuing my passions of writing, photography, and exploring. I'm a beer enthusiast and training to run my first triathlon. Having not grown up in the outdoors, my experiences in the reconnaissance community were eye-opening and informative. I'd experience parachuting into multi-day treks through remote mountain ranges and diving into patrols along coastal plains. I was excited to learn that overlanding afforded me the ability to enjoy the outdoors—off the ground.