It was May of 2013 when I sold and gave away all of my belongings, until all I had left fit in a Sportsmobile Van. With countless miles promised to soon be between myself and the house I no longer rented, the location of my passport and my Chaco sandals was all I cared about. As I dropped off my last bags to Goodwill on the day I left Grand Junction CO, I already knew I was in love; in love with the van, in love with my man and in love with this land.

‘Adventure’ is the word I seek to define my life. The only thing standing between that definition and me, is time. So, I grabbed that time by the balls, said goodbye to my 9-5 and headed onward to my first real overland adventure, knowing that come monday, I would be far, far away from any office.

Overland Expo was the destination for this leg of our journey. How we were going to get there from Moab, UT was left up to our 4×4, departure angle and lengthy wheelbase. Upon our arrival at the Moab visitor center we were informed of the heavy rain the area had been getting for the past few weeks, and how the crazy trail we were looking at was mostly impassible. The ranger gave us some other suggestions, told us we were crazy and good luck in the van. We surveyed their comprehensive maps, took the free one to give us a general idea of what to look for and then decided that we’d just see where the road beckoned and called. 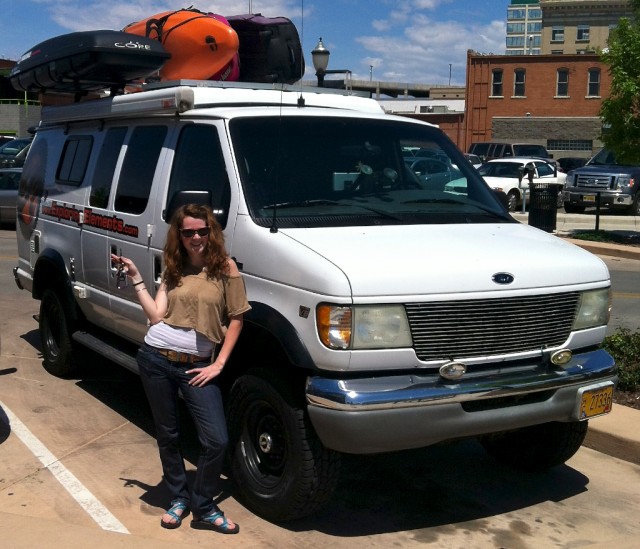 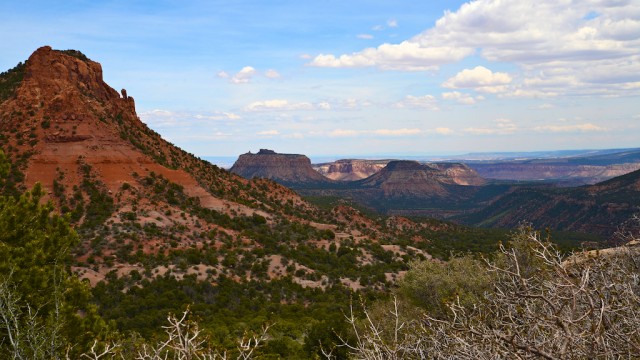 Headed down 191, we each looked out into the beyond, silently questioning which road would hold the best adventure. Eventually we came upon a road name that rang a bell from one of the trails that the Rangers were telling us about. We turned west, curious to see what landforms awaited us. It wasn’t long before we came in contact with another overlander. A matching Lexus 450 and offroad trailer danced across the pavement as it passed us. I was so giddy. How awesomely small this world is that so soon in our journey we would find others out to enjoy this planet beyond highway hotels. Seeing signs for Newspaper Rock, we decided that we would check out the first ‘site’ of the trip. The Lexus apparently had the same idea, as they were already out and soaking up the history. Not feeling like a stranger at all, I bounded up to them, excited to be sharing this experience with kindred spirits. While maybe naive in thought, outpouring smiles and joy are hard to be met with a grumpy demeanor. We chatted for a bit, discussed campsites, future viewpoints, vehicles and then went on our way, as there was still the perfect camp spot to be found.

That first left turn out onto the red dusty oasis, breaking the quiet whirl of pavement, flipped a switch. The sounds of the tire rubber curling over exposed rocks and sinking its tread into the soft pillow of resting dirt sent a chill down my spine. The fresh dry air that was already billowing in though the windows took on a renewed sense of freedom. Two tracks stretched out before us getting lost and snaking deep into the mountains. The gentle purr of the diesel reached out to the sheer rock faces echoing back quiet whispers of all that have been there before. With each breath in, my already sprawling smile spread deep into every fiber of my being. This, my friend, is my kind of adventure. 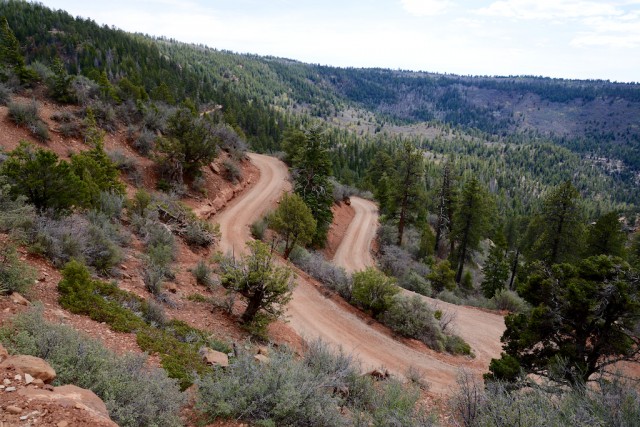 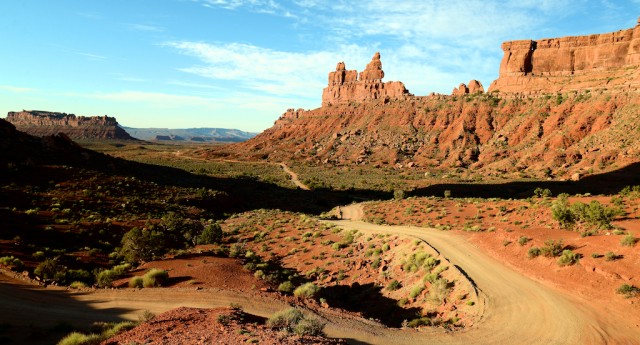 After traveling a ways off the beaten path, we found a perfect site to nestle the van for the first night of our journey. We climbed on top of a few nearby boulders to watch the sunset. As the sun tucked itself in behind the mountains, I reveled in how much more I was able to appreciate time, and how when there are only destinations in your future a schedule is merely an application for experience. After the last of the light had slipped from the tallest edges of the red rocks surrounding us, we sat there basking in the cool enchanting ethers dotted with bright glowing stars. Crawling into the cozy cave of the van, I curled up with the man who was just as happy as I was to be exactly where we were. The sleep that finds you when you are completely and utterly relaxed, bathed in the delicate whistling of the wind through the dry surrounding plants is something of a miracle. However, those first barely conscious morning breaths complimented by nothing more than the stirrings of desert creatures, sooths my soul even more. After a quick bowl of Wheaties and an illuminated ‘SW’ on our compass, we headed into the offroad unknown. Choosing trail after trail based on gut instinct was amazing. As it were, it wasn’t long before our trail dead-ended into a stream. Pilot and co-pilot peered ahead and watched dried tire tracks disappear into the crystal water. Recalling the recent rain in the area, my co-driver embarked on a brief scout ahead to see if the road went on. The stream continued to twist beyond, but we decided to test the waters anyway and forge ahead. Affirming that our 10,000 lbs of home wasn’t sinking into an abyss, we followed the flow upstream until, low and behold, the trail was found again. 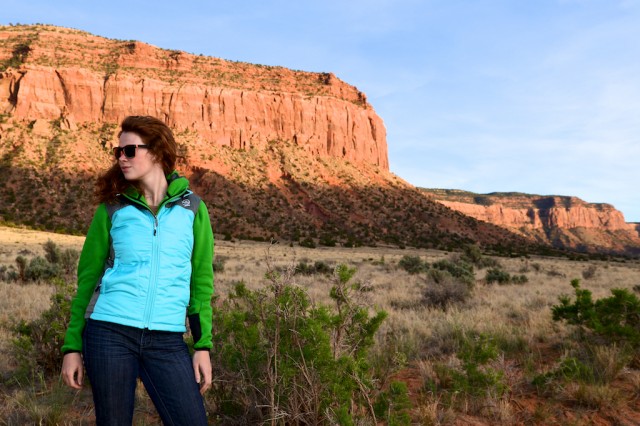 We continued on like this with nothing but smiles, wind and dirt in our hair, for miles. We twisted up the mountains until the view from our windows made my body’s reach for oxygen almost impossible. With my feet planted on the edge of the mountain face, I stood abreast space and time, and watched it still as I felt my body rise up to the adventure at hand.

And the adventure continues…

Sarah Blessington has now been on the road with Bryon Dorr of Exploring Elements for a little over a year, and has been completely immersed in the overland lifestyle. While she set out in an ’02 Sportsmobile 4×4. she now travels in style in the new EEXP adventuremobile build that she help bring to reality. Sarah’s overland adventures around the globe have just begun. 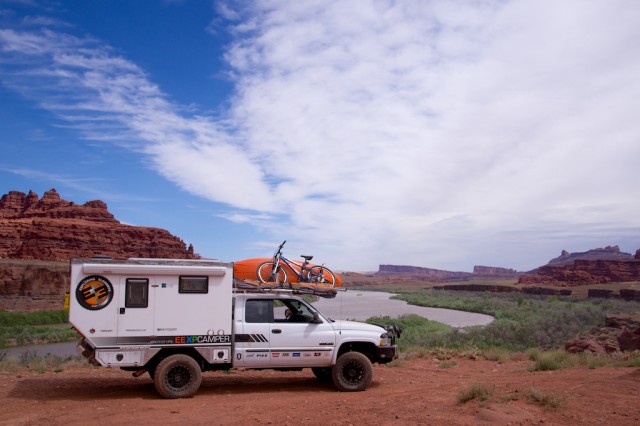 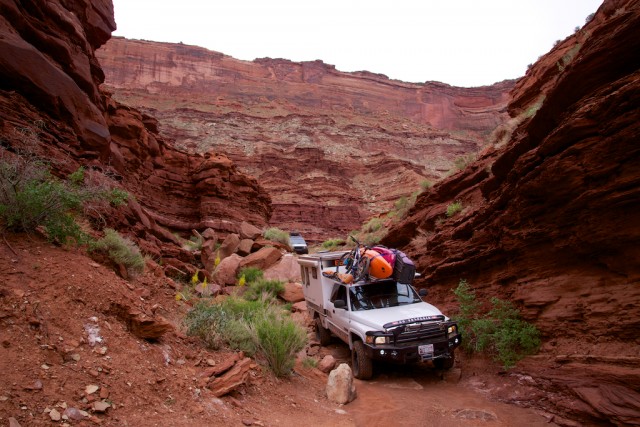 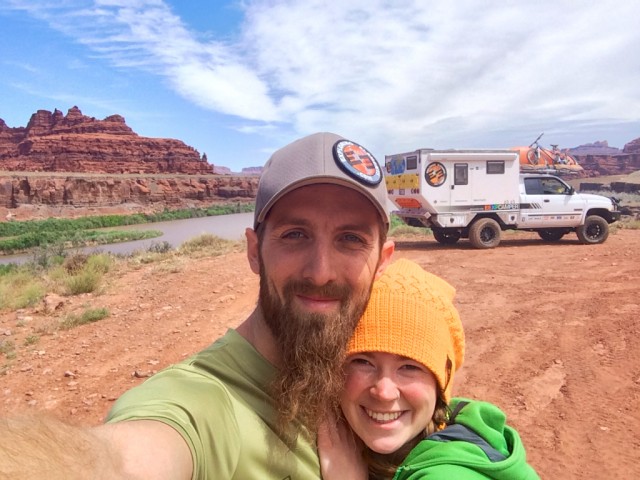