Are you super-rich? Bored? Looking for a good time? Then the new Morgan Plus Four CX-T might just be the midlife crisis for you!

Sure, at a glance, the Plus Four CX-T might look like what Sherlock Holmes would choose to compete with in the World Rally Championship, but there are some bonafide rally credentials behind the badge. The company has a long history of participating in all-terrain endurance events, called “trialling,” which tested man and machine to their limits. As early as 1911, Morgan sports cars were competing in—and winning—competitions around the UK. In fact, trials is where the “T” in Plus Four CX-T comes from, whilst “CX” refers to the CX-generation-bonded-aluminium platform, which underpins both Morgan’s Plus Four and Plus Six models. 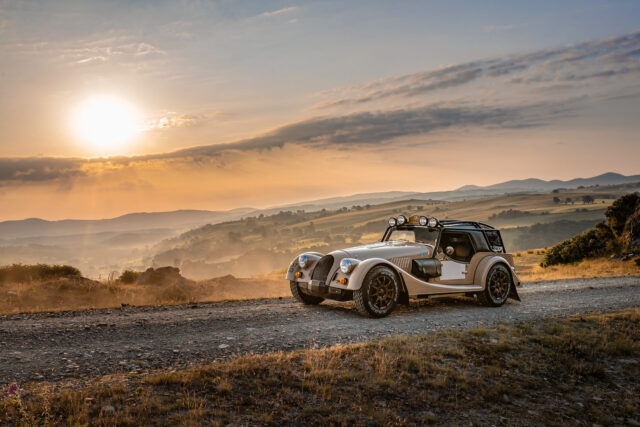 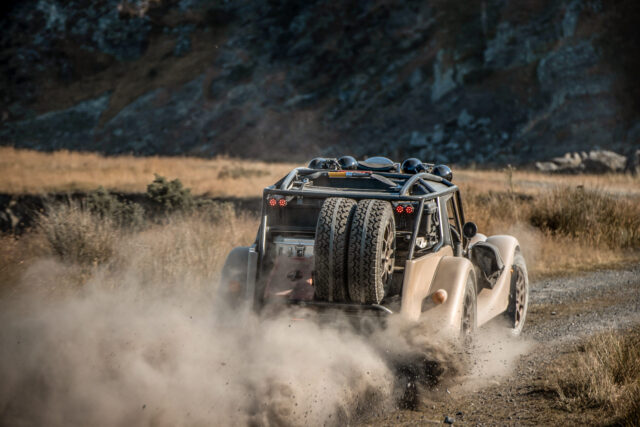 Morgan’s Head of Design Jonathon Wells states: “The project was unrestrained and born entirely from a desire to create an exciting British adventure vehicle. For me, it’s a complete package: historical integrity, legitimate capability, and a brand-new adventure-lead aesthetic.” The Plus Four CX-T was created in partnership with off-road specialists Rally-Raid UK and is “a vehicle set to conquer almost any type of terrain and take you on adventures never previously possible in a Morgan vehicle.” Yes, you heard right, this Morgan is no longer restricted to summer days in the Cotswolds but will also perform flawlessly on the gravel driveway up to your second home or castle in the Highlands. Okay, perhaps I’m being mean, but considering prices start from £200,000 ($277,000), it’s a lot of money for a summertime toy. 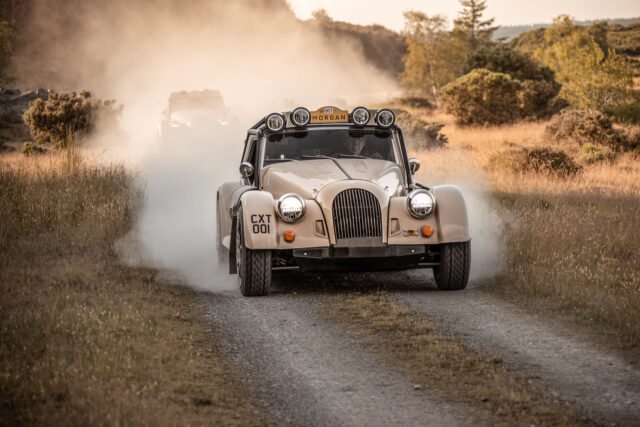 Nevertheless, the Plus Four CX-T’s rally-ready features include EXE-TC coilover assemblies, Plus Six suspension arms, bespoke bushes, off-road tires, five-piece underbody protection, and a custom exhaust system with a rear side-exit that improves departure angle. This setup provides a drive-over obstacle clearance of 230 millimetres (with 140-millimetre rear suspension travel), whilst the three-mode locking differential enhances traction. Morgan also offers a selection of overland accessories, such as a rear equipment rack, which incorporates a protective exoskeleton and houses an array of stowage solutions. Morgan explains that it can be “further adapted to carry leisure equipment such as bikes and surfboards.” The Plus Four CX-T will be built at Morgan’s factory in Malvern, Worcestershire, before undergoing final preparation and setup at Rally-Raid’s UK workshop. 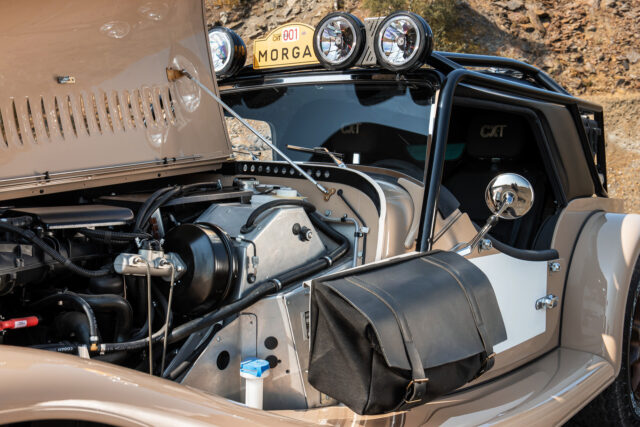 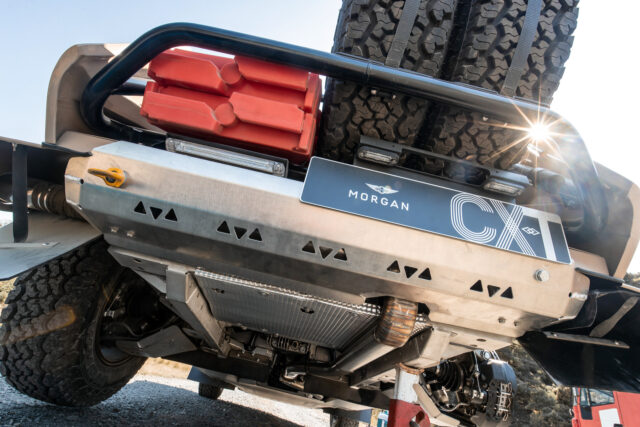 According to Mike Jones of Rally-Raid UK, “Applying my experience of 13 Dakar Rallies, 60 Dakar vehicle builds, and a lifetime of overland adventuring to an unconventional sports car such as a Morgan has been an interesting and rewarding project. Rally-Raid UK and Morgan have engaged with industry-leading suppliers to source the highest quality components, as well as designing a range of bespoke parts that will remain unique to the model. The Morgan Plus Four CX-T is a genuine overland adventure vehicle, and I look forward to seeing the incredible destinations that owners will find themselves in.” 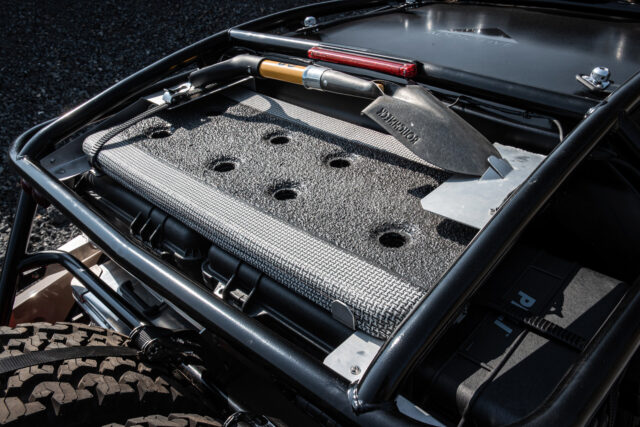 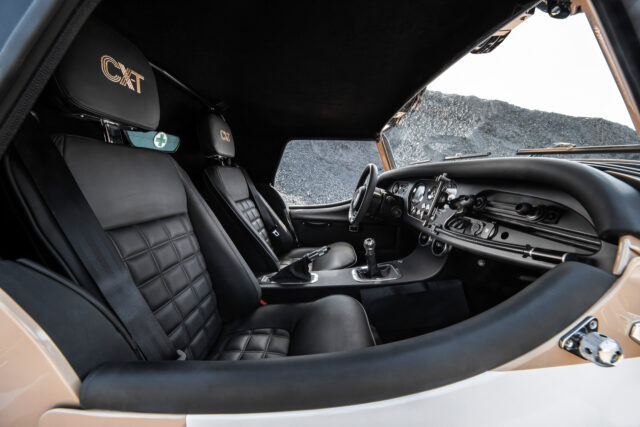 In truth, I appreciate the backstory behind the Plus Four CX-T—after all, it’s like nothing else. And I don’t question the expertise and attention to detail invested in this model by Rally-Raid UK. The concept is really cool, and I love the notion of a lightweight, minimalist, go-anywhere vehicle with all the charisma and style synonymous with classic Morgans. However, I can’t help feeling this was a missed opportunity, and what began as a tribute to the raw trialling of Morgan’s early days became an expensive show pony. The price is just a little ridiculous, particularly when you consider the comparable Ariel Nomad starts at just £33,000 ($45,000). I’d love to see Morgan continue to pursue this overlanding trajectory, but if they want to recapture the magic of their past, they need to create something altogether simpler and more affordable. Morgan mentioned in an interview that a customer requested “lifting points to hoist the vehicle onto his yacht,” which is hardly in keeping with the rugged grassroots rally history that inspired this build. 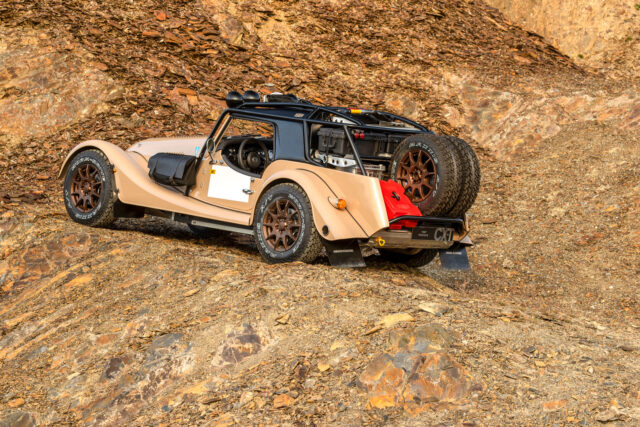 If you’re looking for something unique for the commute to Parliament, then best be quick because only eight Plus Four CX-T’s will be made, and all will be finished before the end of 2021. The lucky buyers will have the opportunity to sit down with Morgan’s design team to tailor the specifications to their exact desires.