Overland travel is an activity that encompasses a wide range of diverse activities, from weekend journeys into the outdoors to multi-year expeditions, group tours for recreation or scientific discovery, and solo exploration far from the beaten track. For some, traveling in convoy or groups is an integral part of the overland experience, and there are more group operations and organizations than ever for whom effective intergroup communication is essential.

Midland Radio is offering three new products which enable two-way radio users to achieve a maximum GMRS range up to 50-Watts (General Mobile Radio Service (GMRS) is a licensed radio service that uses channels around 462 MHz and 467 MHz) without being tethered to their vehicle or home, making the “MicroMobile” entirely portable. Think exploration base camp, tracking animals in the wild, groups camps in remote locations, emergency managers and response teams, preppers, farmers, or teams of scientists or archaeologists working a large area in the field. These products are branded the MXPW series and includes the MXPW500 compatible with Midland Radio’s MXT500, the MXPW115 compatible with the MXT115, and the MXPW01 compatible with the 40-Watt Solar Bundle. The base stations are designed to be rugged and durable with a full suite of features, including a long battery life, quick recharge, and solar charging capabilities. We are crushing hard on the MXT500 Portable Base Station, which comes with a powerful 10Ah LifePo4 built into a genuine surplus 5.56 ammo can, which looks fit for purpose (the MXWP500 uses the ‘Fat 50’, and original ammo would have been either .50 caliber or .556 [M16/AR15/M4]). This base station is waterproof and is claimed to be nearly crushproof. Fully charged, the LifePo4 battery allows 40 to 50 hours of listening and 3 to 20 hours of general use (depends greatly on power setting and transmissions). The LifePo4 lithium iron phosphate battery is claimed to have a cycle life of over four times that of lithium-ion polymer batteries.

“We’re thrilled to bring a new product to the market that takes Micro Mobile usability to the next level. Now, our customers can take their two-way GRMS radios wherever they go without worrying about losing power or staying close to home. No other radio provider offers a compatible portable base station quite like this,” 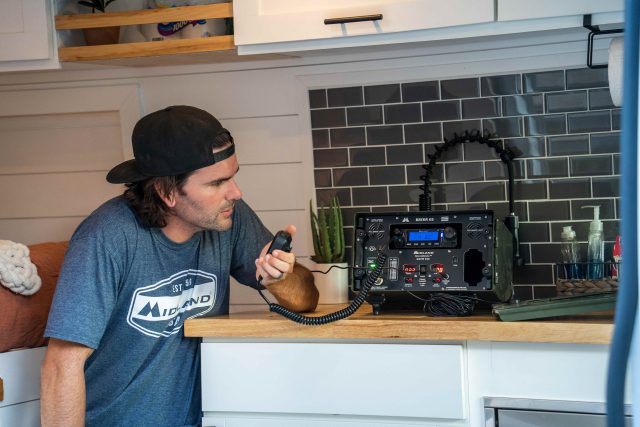 Depending on availability, the units are offered at the following price – radios not included: