It was roughly a year ago when I plucked this little beauty from a collection of boxes and with anxious hands began assembling it piece by shiny piece. As it came together, passers by at the Overland International office would stop and say, “Wow, that’s a cool bike. What is it?” It’s easy to forgive the uninitiated for not immediately knowing what to make of a bicycle that looks largely like a mountain bike until you take note of the unusually flared drop bars. To the adventure cycling set however, that is the one thing that sets it apart as unmistakably––a Salsa Fargo.

As I said of this bike in the 2014 Overland Journal Gear Guide, “The Salsa Fargo Ti is a witch’s brew of exotic ingredients borrowed from other platforms to create an adventure bicycle without peer.” I do get carried away with my wordsmithing, but you get the drift. It’s a handful of 29er mountain bike mixed with a pinch of touring bike. What ever it is, the end result is a bike designed to devour big miles regardless of the terrain. 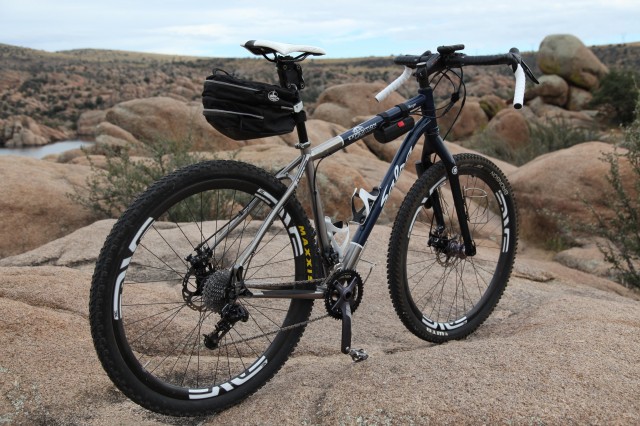 The thing that is most surprising about the Fargo platform is how well it does at just about everything from tough trail to baby smooth tarmac. We’re all well aware of what happens when you design something that does everything. It usually does nothing, or at least nothing well. The Fargo certainly isn’t an all mountain shredder, nor will it win your local road race, but it is impressive how well it conquers everything in-between.

Some of you may remember our Fargo project from a couple years ago. We built up a steel Fargo in a multitude of configurations from commuter to tourer, singlespeed to bikepacker. I even rode it in a 100 mile mountain bike race proving two things: I’m a glutton for punishment and the Fargo is if anything––versatile. The titanium version is all that and more.

I have now racked up just short of 1,800 miles on the 2014 Salsa Fargo Ti, and I am wholly smitten by it. I loved the steel variant, but the titanium version with updated full carbon fiber fork is simply better. What I noticed first, something I hoped I would notice, is the lively feel of the titanium frame. There is a feedback that is indicative of titanium that is hard to put to words, but it is there. It’s more than a compliance to the ride, it’s a feeling that the frame is contributing to the effort. It has a springiness that is, well, what makes titanium the “magic metal.” Regarding the new all-carbon fork, it simply adds a level of control accuracy that the steel fork couldn’t achieve. Diving hard into turns the new fork holds a line with tenacity and confidence. Standing with the bike fully loaded with bikepacking kit, the fork is steadfast, never flexing to the pressure. 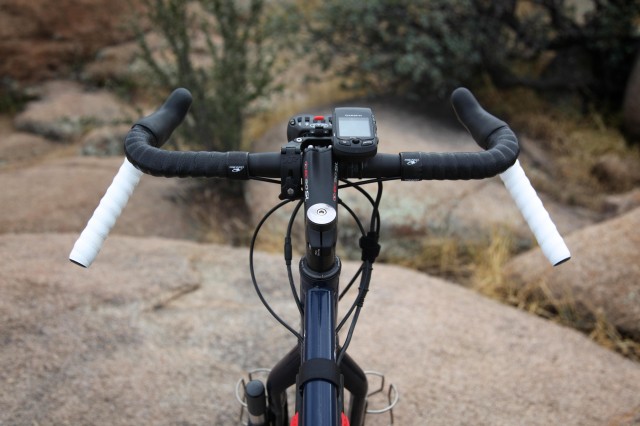 Taking the Fargo Ti to the singletrack is one of those things I do more often than I thought I would. Maybe it unleashes my inner Tomac (Who raced drop bars in the early 90s), or maybe I just like the challenge. Regardless, it is very doable to ride technical singletrack with the Fargo as long as you adapt to three considerations. First, the bottom bracket is relatively low, so being mindful of foot placement is key lest you smack your cranks on the rocks with enough force to loosen your fillings. Secondly, the hand positions best suited for braking will likely put you in the drops. That’s a pretty aggressive place to be when rolling down techy trail. Lastly, the geometry is pretty relaxed so diving into hard turns requires some turn telepathy. You can’t figger out your line mid-turn. If you do, you’ve way over shot it. Fitted with full bikepacking kit, and at moderate bikepacking tempo, the off-road chops of the Fargo Ti are more than adept at tackling any moderate trail. 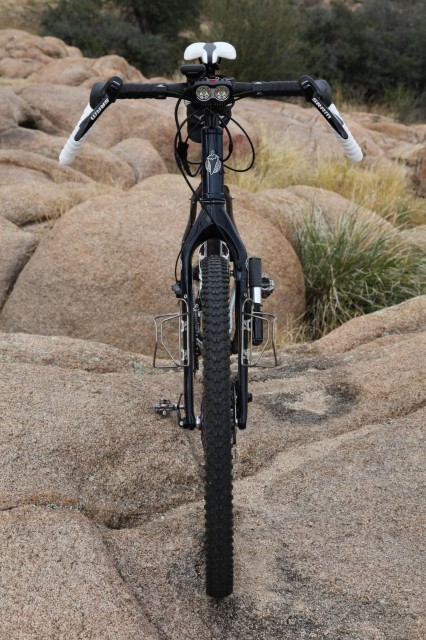 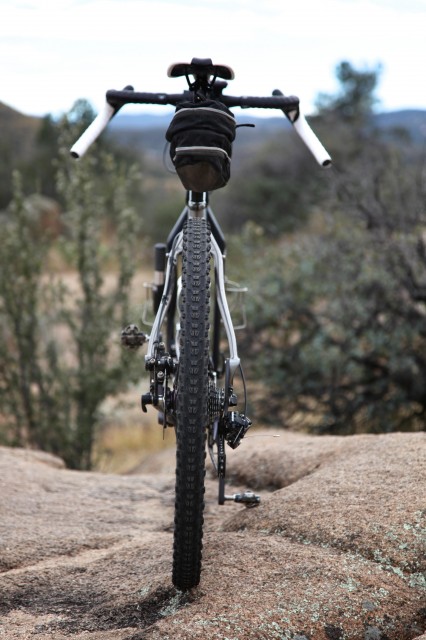 At the risk of just burning good tires for the sake of wasting rubber, I have slogged down many a mile of pavement on the Fargo Ti. The longest day might have involved a solid 87 miles of pavement and all things being considered, it did quite well. Hunkered down in the drops, the miles melted away, the drivetrain more than tall enough to provide enough gear. On a recent bikepacking trip near Durango we hit speeds nearing 55mph on the road and the Fargo Ti was rock solid, even under full load.

Being a bike dork of the highest order, it was only a matter of time before I adorned the Fargo Ti with a multitude of upgrades, most of which are obnoxiously unnecessary, but fun all the same. I don’t know why I felt it needed a 120 gram Easton EC 90SL carbon fiber stem, but it’s on there. It probably didn’t warrant carbon fiber bottle cages, but I had them in the closet so why not, right?

The big register dinger was the purchase of the ENVE XC carbon rims paired to Sapim spokes and Chris King hubs. I could have bought a really nice bike for the price of these two wheels alone, but they are spectacular wheels. Okay, that might have been over the top, but they really did add to the line-holding capabilities of the front end and the power delivery at the rear. And, most importantly, they declare my status within bike geekdom better than a cog-capped scepter. 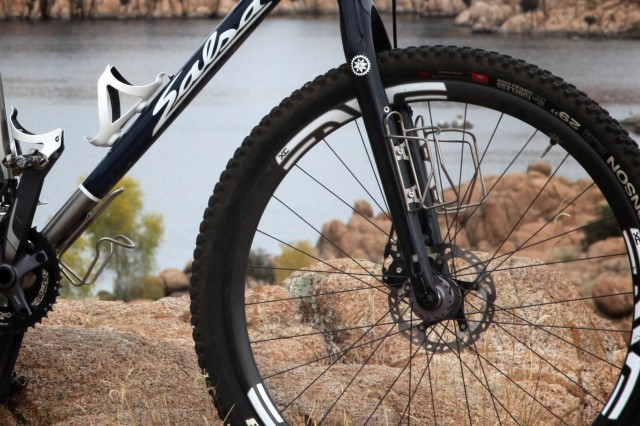 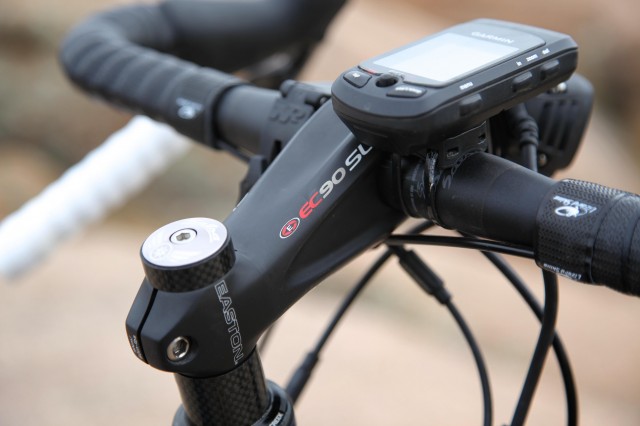 By now my Fargo Ti has become a bit of a do-all machine and as such gets used as a daily trainer, weekend bikepacker, and as soon as my schedule clears, will be used for more protracted journeys. As the days shorten, I have fitted the Fargo Ti with a Nite Rider DIY Pro 3600 light system. Some may lament the weight of the battery and lamp, but for me, they permit several rides on one charge. Plus, they are ridiculously bright. I have only had the lights for a month, so I’ll have to give a full report on those later.

At the aft end, I did what I said I’d never do and fitted the bike with a rear rack and bag system. I hate riding with a pack, so the Moots Tailgator system seemed ideal. The tubular titanium rack weighs but a handful of grams, and can be used to hold the two purpose-buit Moots bags, or any small bag. For things like spare tubes, a jacket, snacks, and all the goodies needed to keep me on the road as long as possible, it’s pretty slick. With the ability to mount five water bottles on the Fargo Ti, I’m seldom thirsty. 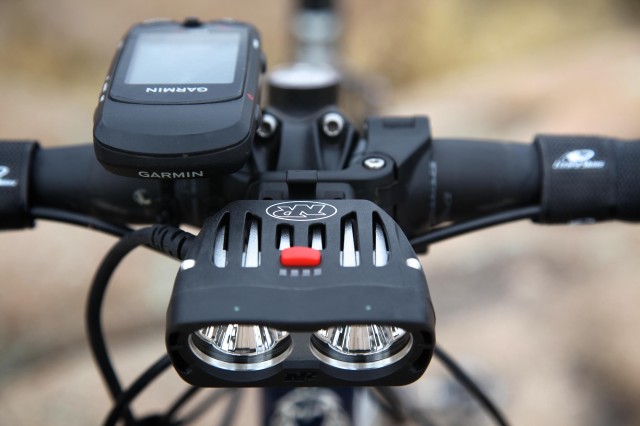 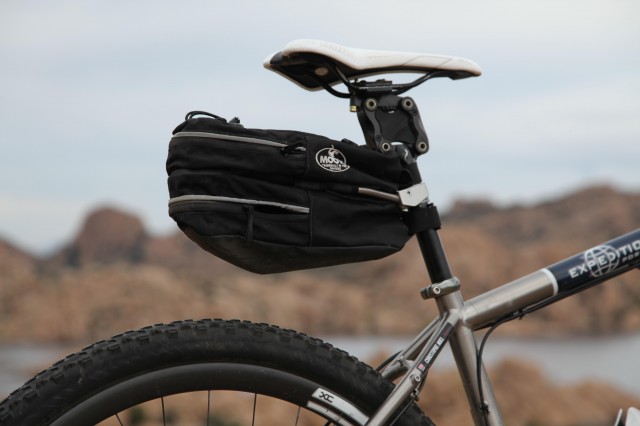 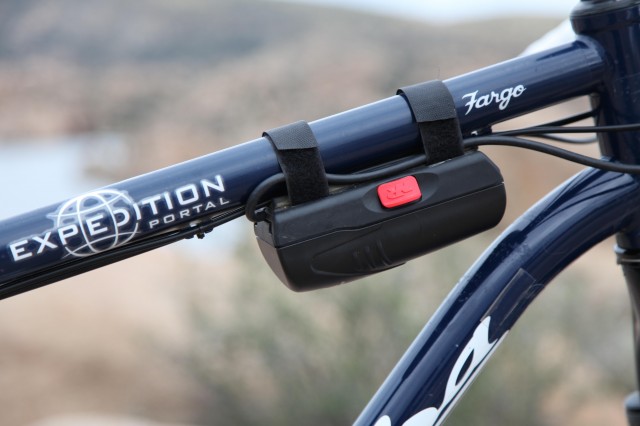 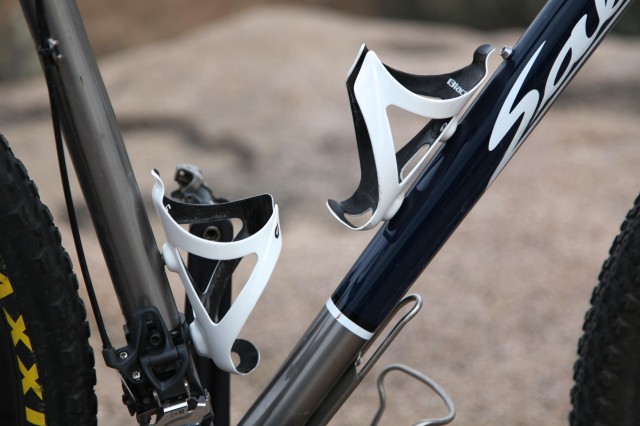 It’s a beautiful machine, the 2014 Salsa Fargo Ti. I’m happy to see Salsa didn’t make many changes for 2015 as it is a near perfect design. Even when I squint through a critical eye, I can find no discernible faults with it. The finish detail is superb, equal to the boutique ti bikes in my quiver. The geometry and fit dimensions are neutral and accommodate a wide range of rider sizes. It’s a thoughtful bike, one the competition must feel is too intimidating to challenge. The Fargo seems to occupy its own space in the market, and perhaps that too makes it extra special.

What I enjoy most about the Fargo Ti is that every ride holds endless possibility. I might start a ride burning pavement, then hit a gravel road, stretch of singletrack, it really doesn’t matter where the route takes me, the Fargo will eat it up. It also begs to be ridden for long hours. Anytime I get a full day to ride, I load it up with food and fluids and just go. Where I go matters not. That freedom to go anywhere gives the Fargo a sense of freedom I truly love.

The only thing mine needs is more miles. Where to find the time, that’s the thing. 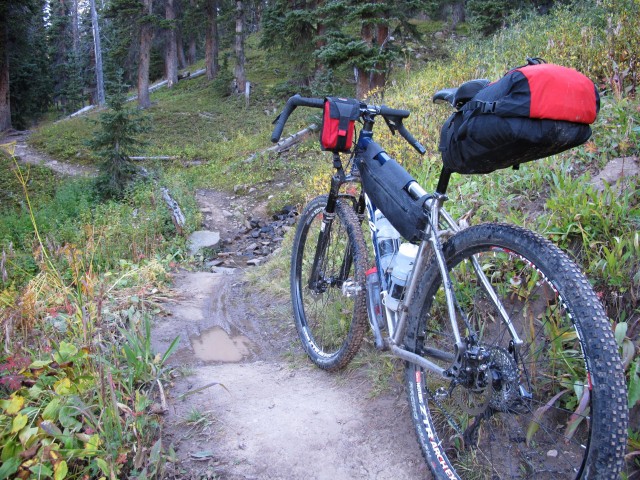 On a recent bikepacking trip along the Colorado Trail from Silverton to Durango, the Fargo Ti carried me and my gear with no problems at all. I did fit the Fargo with a SID carbon-crowned fork, which was necessary for such an aggressive trail. The brakes might have been a tad underpowered for the long and steep downhills, but all-in-all, it was a great platform.