“What? Are you kidding me? I’m not going to lug that thing around on the trail,” I exclaimed. In preparation of our ten-day hike in Torres del Paine, a national park in south Chile, we had laid out all our camping gear and separated it into two piles: one for the essentials and the other for if we’d have room left in our packs. Marty had just tossed his gift to us – a colorful, double cotton hammock from Mexico – on the pile with essentials.

“Trust me, you will love it. What’s more, you will long for it, especially after a tough section you will want to do just one thing: lie in that hammock,” our experienced hiking friend responded while patting my shoulder. 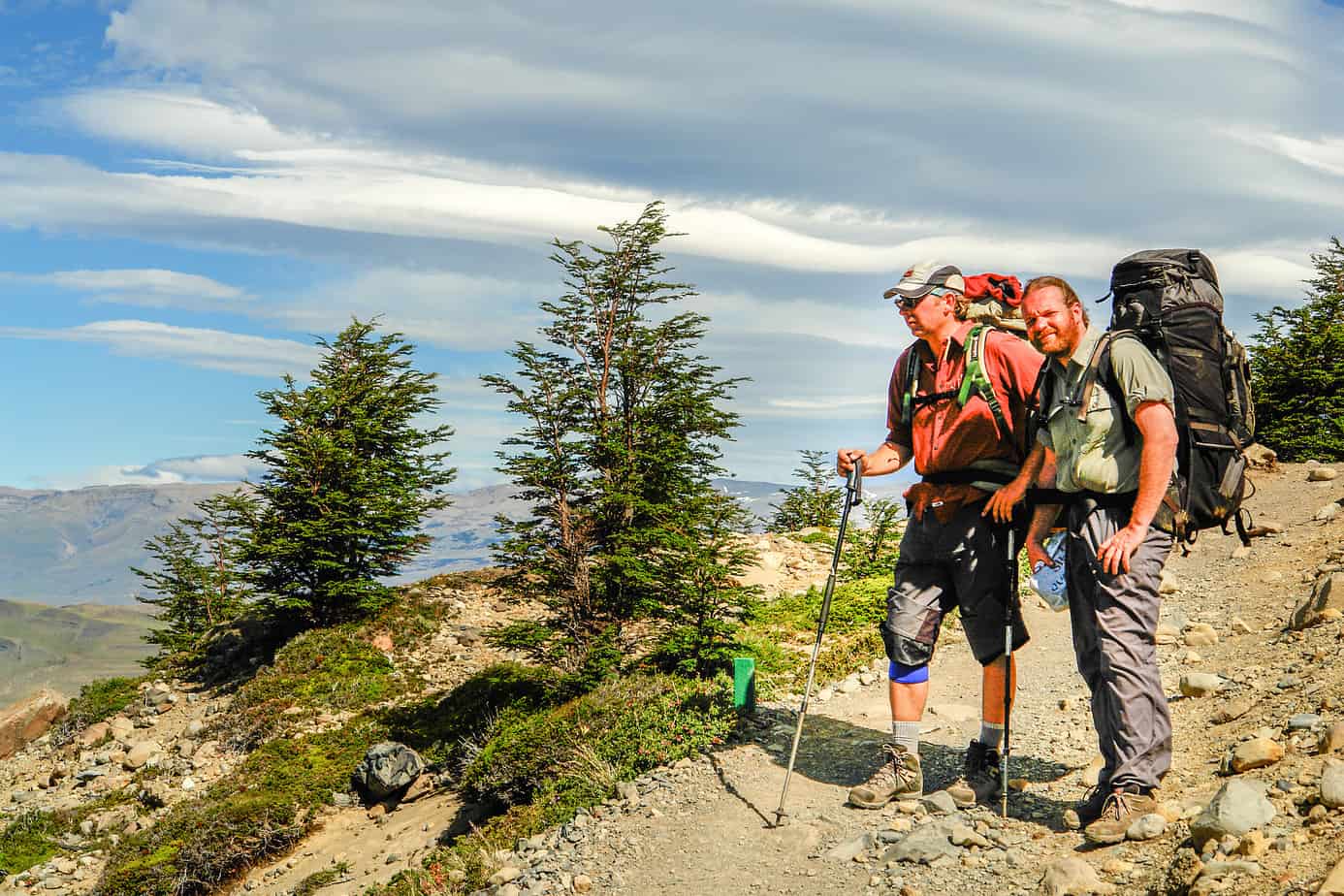 Hammocks are not ingrained in our Dutch culture. I remember having one when I was a kid, which I think my parents brought as a gift from some far-away land. As a result, a hammock was not on my mind when packing for our overland journey in 2003. After our departure, the first encounter with hammocks was in Greece, where temperatures hovered above a hundred as a heatwave had struck the country. We were going to take it slow and had brought a pile of books. At one campsite, I saw one or two people lazing in hammocks and looked at them with envy. Our folding chairs came with comfortable but thick padding – not the best choice in this heat.

When I came across hammocks for sale in a sprawling bazaar in Istanbul, I immediately spent the equivalent of six euros to buy one, my untrained eye not realizing it had been made from coarsely woven, nylon ropes. The hammock was too rough to lie in comfortably without wearing a shirt and would leave my back with deep imprints when lazing time was over. The advantage was that any airflow, just the tiniest breeze, found its way through the mesh netting and in that respect the hammock was a perfect hot-weather solution. It came with two wooden crossbars on either side, which made it easy to roll up but it took up quite some storage space in our Land Cruiser. But as this was the only model I saw, I didn’t question its design and material and enjoyed it throughout the summer as we traveled along Turkey’s turquoise sea and camped on yellow-sand beaches.

Winter set in and the hammock got packed away, only to be used a couple of times in Pakistan and India later on our journey. After three years on the road, reaching the end of our Southeast Asia journey, we had a thorough repacking session, discussing what we wanted to keep for the next leg on our trip: South America. Among the items discarded was the hammock. 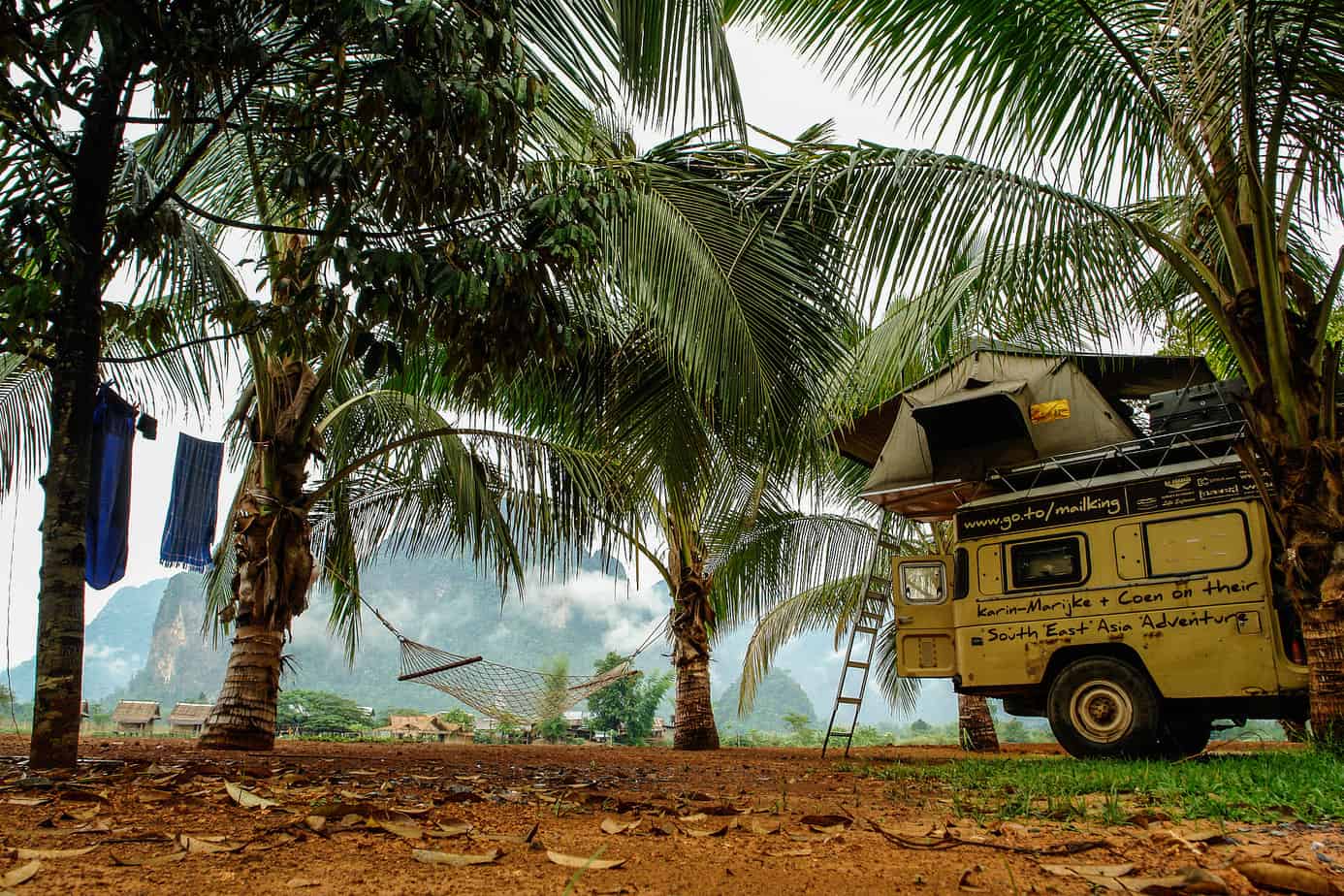 Our Canadian friend Marty had flown into Patagonia a couple of weeks earlier, and was cruising with us for three months in South America’s most southern wilds that offer so many hiking opportunities. He swore by his Mexican hammock and, as a thank-you for inviting him to this trip, had brought us a double version. These Mexican hammocks are made of fine cotton thread and woven much more tightly, so they feel much softer to lie in than our first nylon version from Turkey. The absence of crossbars make it a small and adaptable package to stow away. You can pack it sausage style or in a ball depending on where you store it. However, Marty warned, never, ever get it tangled! He showed me how to string it up and pack it away to prevent this problem, which does require a bit of practice. 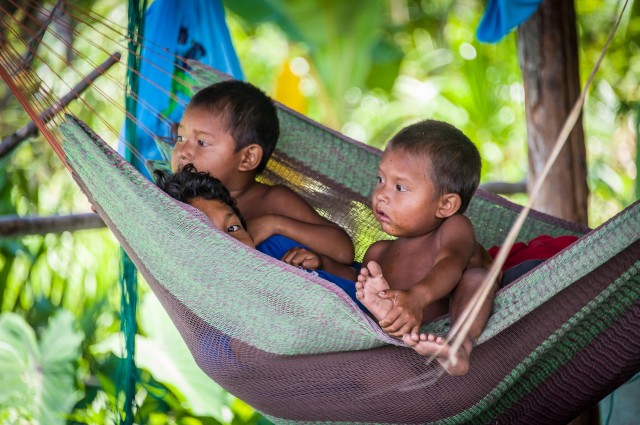 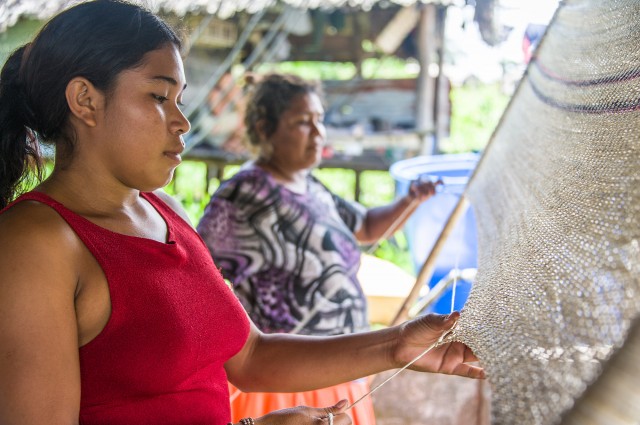 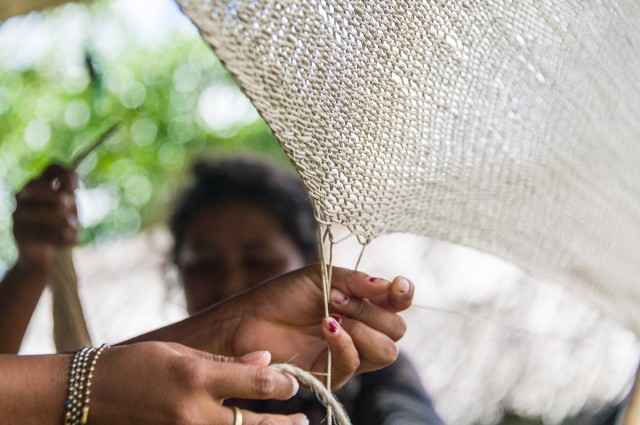 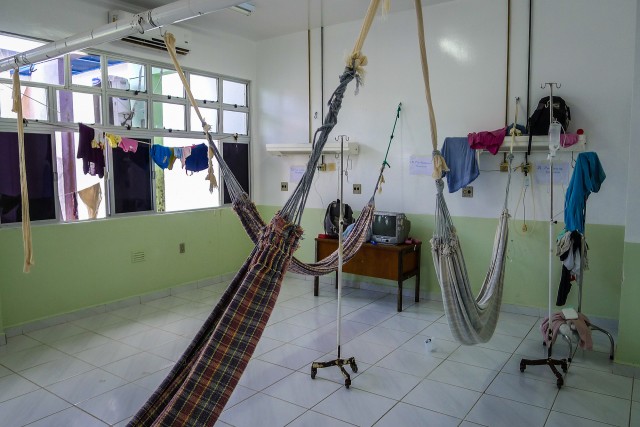 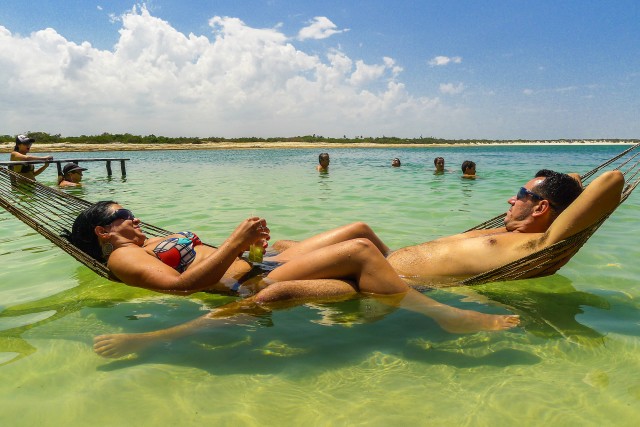 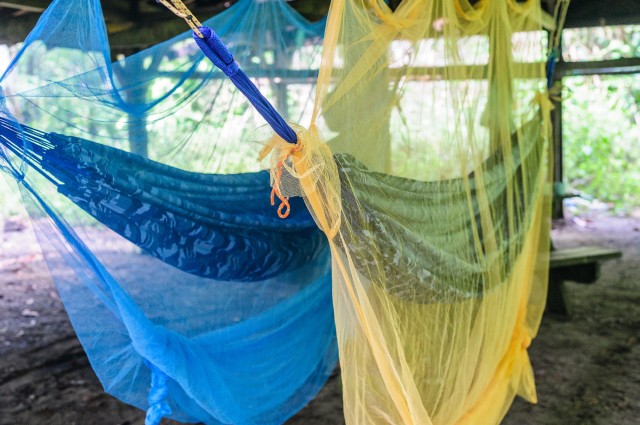 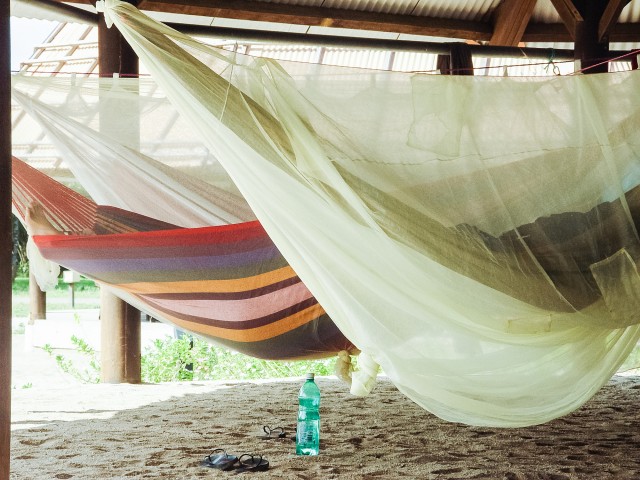 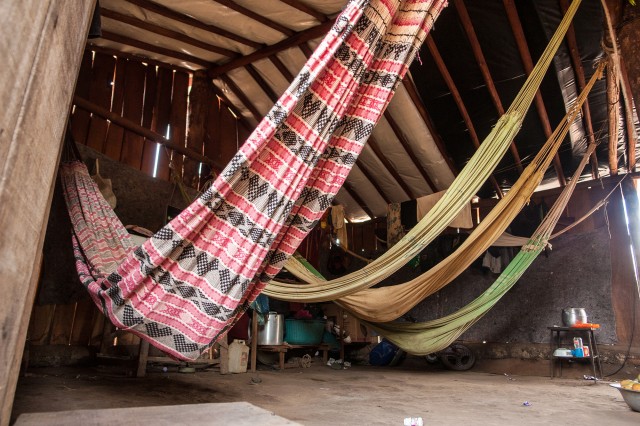 Contrary to Asia, many countries in South America do have a hammock culture, in particular the ones in warmer climates, often, but not limited to, in and around the Amazon. The hammock is one of the few things, if not the only one, colonizers ever adopted from indigenous groups in Latin America, although they have changed its style and materials. Throughout our travels we have come across locals who use hammocks in their daily lives, which come in many different types, from heavy cotton ones to hammocks made of lightweight, woven bamboo fibers.

You’ll find them slung across verandas or in the middle of the living room for a nap, while others love to sleep in them at night. Locals sling the hammock with just a few wraps of rope between two beams or on sturdy, stainless steal hooks that can be folded away into the walls when they pack the hammock away. When we visited Boa Vista to see our friend Ricardo, he showed us around in the hospital where he works as a pediatrician and pointed out rooms that had been specifically equipped for indigenous people who lived in the forest: these rooms had no beds but hammocks.

While Marty preferred stringing his hammock up with two pieces of rope, I’ve added two carabiners to make it easier to tie and release the hammock without getting it tangled or dropping it on the floor. The first time I used a bowline knot but found it cumbersome. Marty demonstrated a type of dual knot that ended in a slipped half hitch. It turns out to be very secure, and with one (or two, if you want it to be more secure) pull is undone quickly and painlessly. I still use that today. On long days of driving through the vastness of Brazil, I particularly loved my hammock for an after-lunch nap, always making sure to park next to a tree for much needed shade and as a fastening point, while the other end of the hammock was fixed to the Land Cruiser. 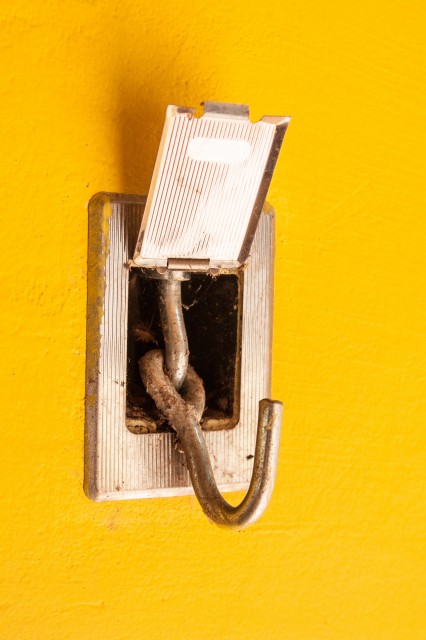 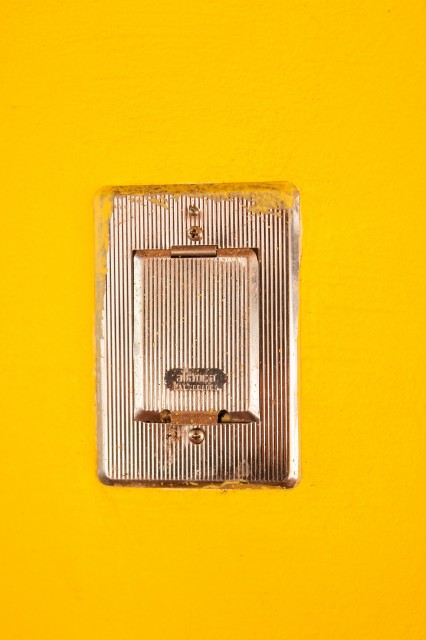 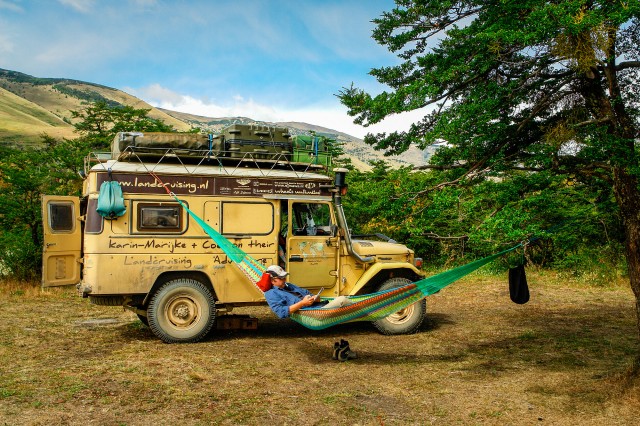 The downside: contrary to thick cotton hammocks, the Mexican one is not a first option to sleep in at night. The open weaving makes it cold to sleep in, plus it provides easy access to bugs, so you need a sleeping bag to lie in or on. Sleeping in it with two persons would be very uncomfortable as when one moves the other will be disturbed. As a result, when we needed hammocks to hike in Suriname’s and French Guiana’s jungles, we bought two cheap nylon sheet hammocks with mosquito nets, which is the common way of using hammocks in the Guianas. 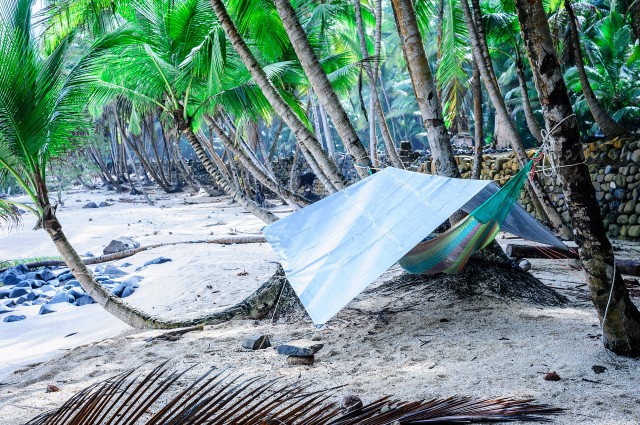 A hammock on the trail

Marty is a very experienced outdoor man and so our double hammock did end up on the pile of essentials for the ten-day hike in Torres del Paine. While Karin-Marijke doesn’t care much for a hammock, I used it every day. I will even confess that I would hallucinate about it while struggling across a snow-laden pass with views of a glacier and when hacking our way through peat bogs.

Meanwhile we’ve had several repacking sessions, discarding more stuff, but the hammock is still with us and, even after nine years of use, in perfect condition. We shipped the Land Cruiser and are, once more, back in Asia, albeit in the northeastern part of it. Koreans love the outdoors and camping, but swaying in hammocks is not part of it. I admire all the fancy outdoor stuff they have, but at every campsite I’m glad to sling my hammock and snatch forty winks. 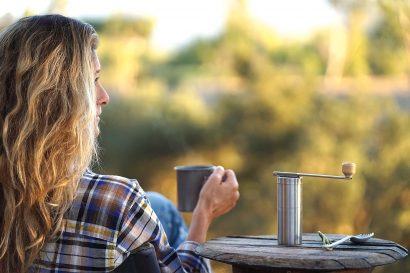 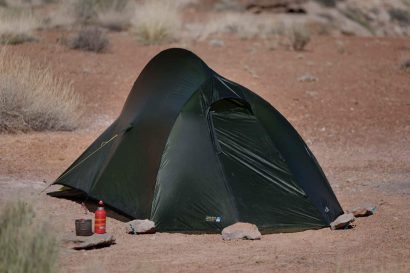 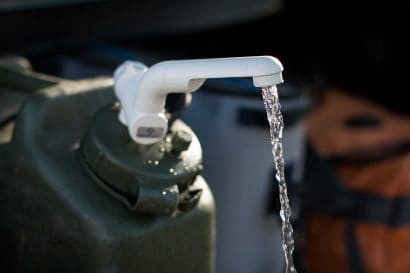