Coffee is an important part of our daily ritual and while I am by no means addicted (but Karin-Marijke is, hence this topic being part of the Essential Series; for other essentials check out the bottom of the page), I like brewing it. Over the years we have adopted different styles of preparing our ‘cuppa joe’, depending on availability and gusto. Here is an overview of the path that led to our current preferred way.

In the Beginning – From Nescafé to Moccachino

When we started our journey in 2003, minimalism, budget and keeping things simple prevailed over refined and sophisticated choices for the best quality. So, shockingly enough, I left my iconic hexagonal 9 cup Italian Moka pot (Espresso Maker) in my mom’s attic and we hit the road with a large pot of instant coffee. I know, don’t remind me. 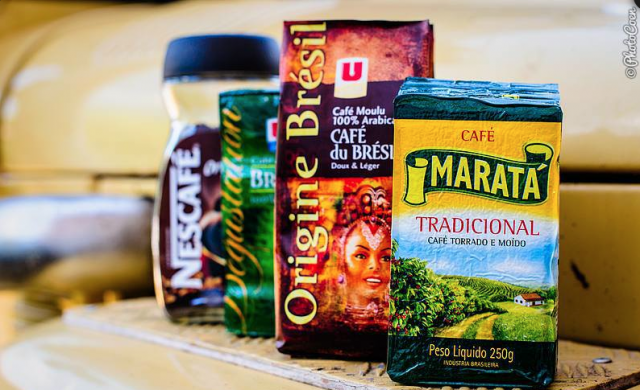 Actually when you get used to the stuff it isn’t half as bad as you might think. The big advantage, of course, is that it is super easy to prepare. Just fill up the thermos with hot water in the morning and on any moment of the day the freeze-dried, rehydrated beans can ‘instantly’ fulfill your craving for caffeine.

Other overlanders taught us how to make a great Moccachino. Mix in a table-spoon of instant coffee, sugar and a splash of cold water in a cup and start stirring. After a while you’ll be getting a light brown frothing or foamy kind of liquid. When it is homogenous, it’s time to add boiling water and voilà you have a perfect moccachino.

After seven years of living on instant coffee, we renewed our contact with Brazil’s highly addictive cafezinhos. Served in tiny – mostly plastic – cups this super dark and sweet beverage is omnipresent in Brazil and offered for free after lunch and at any gas station. There is no avoiding the tasty brew and we found ourselves topping up fuel more than ever. It is especially dangerous when combined with the ever delicious pão de queso.

In fact, Karin-Marijke loved it so much that she dedicated a separate blog post to Brazilian coffee (you can read it here). 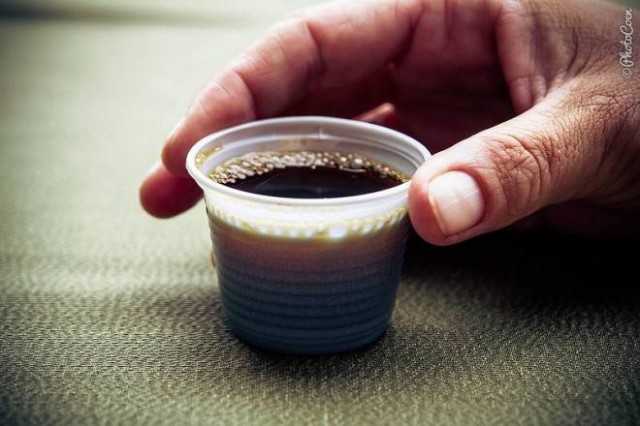 By the time we crossed into French Guyana, Karin-Marijke – in her inventory/space manager role – had no problem whatsoever storing several packs of her preferred blend of dark roast as well as a coffee sock. So size-wise we now had a few packs of coffee, a Brazilian coffee sock and a thermos.

The Brazilian brewing method takes more time than the instant way, but much more rewarding in terms of taste, and after seven years it felt good to drink ‘real’ coffee again.

How does it work? You bring water to a boil in a pan, lower the flame, add coffee (and sugar if you like) and start stirring. After a minute or so, you turn off the heat and keep the pan covered for another minute or so for the grounded beans to sink to the bottom of the pan. Now comes the tricky part: You have to poor the brew into the coffee sock that you’re holding over one cup, then another cup and finally the thermos. It may take a while to master this without spoiling too much of your precious dark liquid. In fact, with our pan it generally did become a mess; it would be better to have a pan with a spout or a dedicated drip pot

The downside of this, I find, is the amount of water it takes to clean it all. It also meant having to find a small quality thermos to keep the brew hot as we progressed through the day. 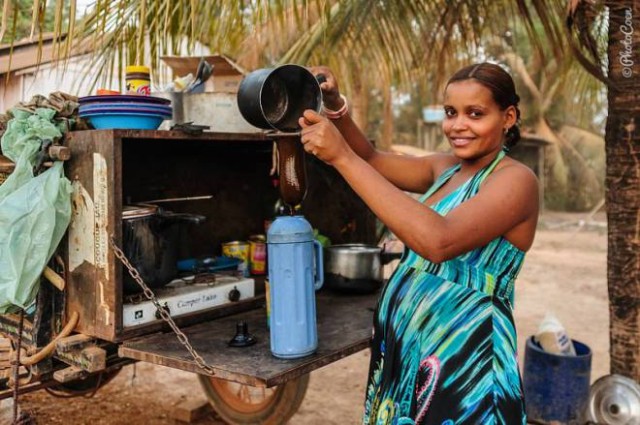 We rolled quite some time with this set-up until we dropped in on our friends’ house in Cochabamba, Bolivia, where we spent a couple of weeks spending time together and getting things crossed off our many to-do lists. Here my love for the Italian Moka pot was rekindled, because in their kitchen stood a beautiful stainless steel classy version of my classic hexagonal aluminum one that is still gathering dust in my mother’s attic. 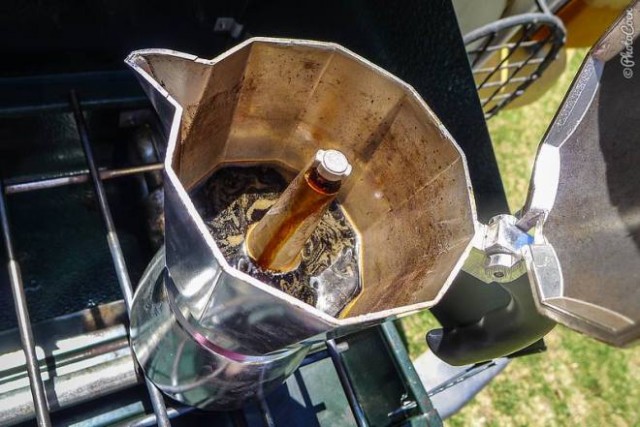 Weeks after our intermezzo in Bolivia, we were strolling the isles of a big box store in Arequipa, Chile, looking for a new duvet, when we both spotted the cheap Moka pot, albeit an aluminum one. That same night we discussed whether we should change our coffee-making habit once more.

We bought the aluminum one but didn’t use it much as Karin-Marijke let it sit on the fire too long and the valve exploded. Maybe this was not meant to be the one for us.

Lesson learned is that while it is very difficult to burn a big boiling pot mixture of water and coffee, it is easy to let a small Moka pot explode if you let it out of your sight for too long. The poor pot had a huge gash in its side. 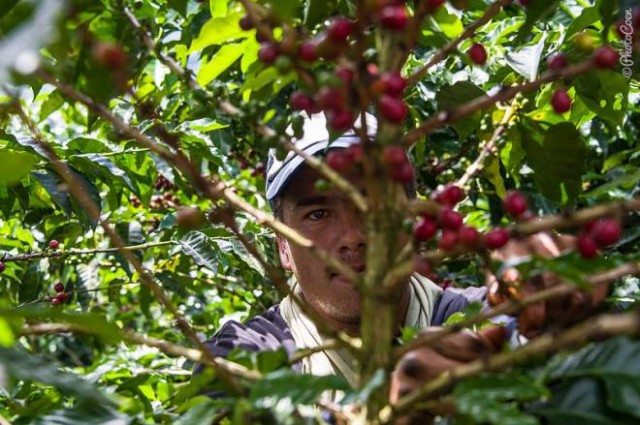 While foraging at the weekly Saturday organic market (read about it here) in Lima, I spotted some funky colored original Italian Bialetti Moka pots but was put off by the ridiculous high prices. I understand that quality has a price, but with the high importation taxes most South American countries impose, these Italian Moka pots were way out of our price range.

When we camped on the beach in Huanchaco (near Trujillo, Peru, read about it here), we discovered that Trujillo has a fancy shopping mall, which was just what we needed. High on our list were a duvet, a stainless steel frying pan, a piece of leather, and of course a Moka pot.

Ultimately we found a perfect 4 cup stainless steel Moka pot resembling the Bialetti Musa and for 15 dollars, it was a steal. 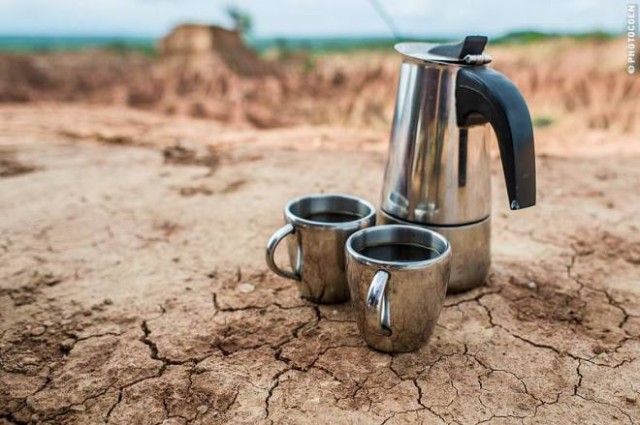 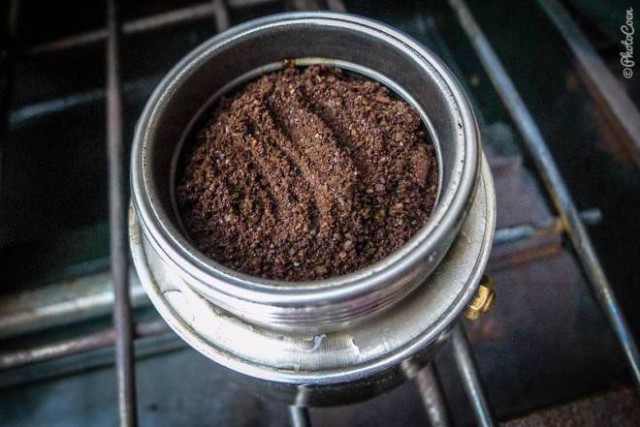 We have been using the fake Musa for some time now and I don’t know what they did with the filter gasket, but it looks still as new. When cleaning it a bit more seriously for the first time, I found out that in fact, they had put two filter plates in there. Not sure why that is, but we now have a spare. The filter gasket thing has me worried a bit as the shop didn’t sell the gaskets, only the complete pot. But as it is a clever copy we might find that the original Musa’s gaskets

Never change a winning horse they always say, but that doesn’t mean you couldn’t try a different flavor once in a while. It may change the way you think about making coffee, or it will confirm your initial choices. In light of this I made a small side step as Julie Schwietert, one of our New York friends send us a Handpresso as a gift. 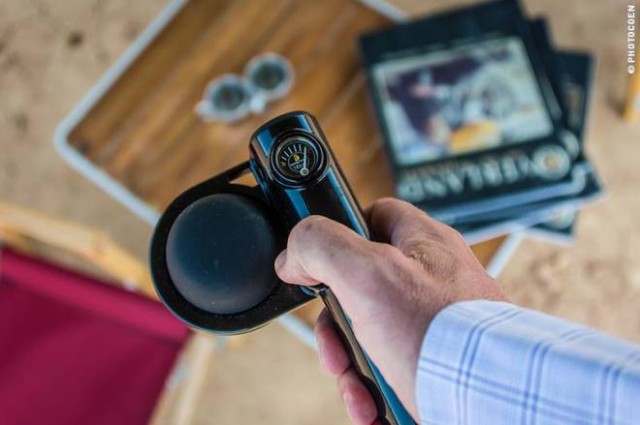 I opened the package and found my long cherished dream come true when I held yet another beautifully designed piece of coffee culture in my hand. You might see it as a small bicycle pump on steroids as it uses a whopping 16 bar to produce a true espresso without the whole shebang you normally associate with an espresso machine

It took me some time to figure out a good strategy and the perfect coffee grind. This might pose a problem on the road as it is not that forgiving as the Moka pot when it comes to finesse of the grind. But once I had overcome the initial challenges and found my way with the Handpresso, I thought it brewed a pretty hefty albeit very small cup of delicious espresso. It is the perfect way to enjoy a cup out on the road. You fill a small thermos with boiling water and while on a hike or bicycle ride you sit down and pressurize the Handpresso to inject a powerful black creamy liquid in a small cup. 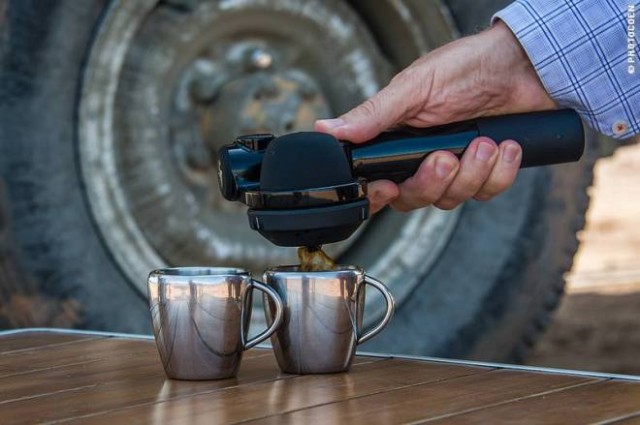 Now the not so fun part started, as we are two and generally I like two small cups this meant I had to brew three consecutive cups of espresso. Quickly cleaning, pressuring and refilling the Handpresso prove not to be very successful and after the initial euphoria, the joy of making coffee slowly faded away.

The Future of Coffee Making

The Handpresso has found its way to my motorcycle friend Edwin, who will give it a try and see if it can spice up his solo motorcycle travels. As for us, we have gone back to our trusted way of using the Moka pot. 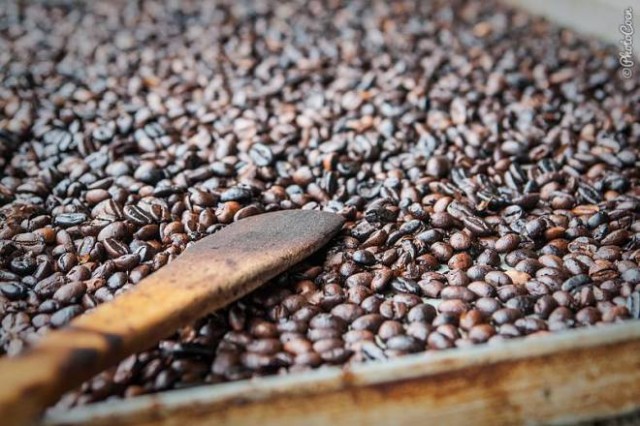 But while we were roaming around Colombia we landed in some funky coffee bars and I have come across some interesting ways of making coffee. Some might not be as convenient as others for example the 48 hours cold drip we saw in Salento. But what did sparked my interest was a Bialetti Brikka that was sitting in a modern café in Armenia. 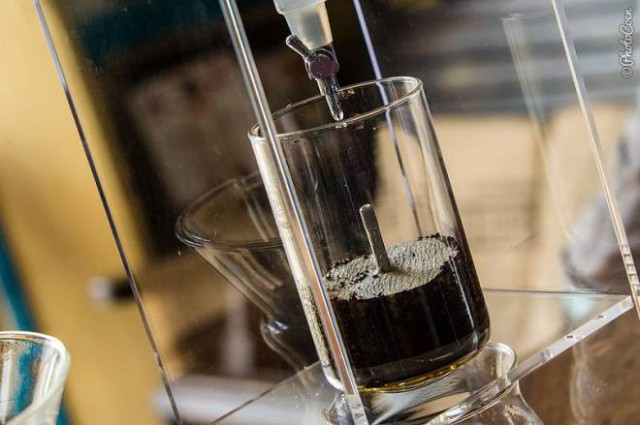 For a nice read on getting the perfect brew head over to La Bottega Milanese. That is also where I read more about the Brikka:

A variation on the Moka, the Brikka features a modernised weighted pressure valve, which essentially acts as a pressure cooker. This means less vapour is released from the valve, so that pressurised water reaches the upper chamber at a much lower temperature. This lower brew temperature is similar, and perhaps slightly lower than the 92/94 degrees widely applied to pour overs and opens a new world of possibilities for this old-fashioned charmer.

For now we stay with the Moka pot and who knows what the future might bring. Let me know what system you use when traveling in the comments below, and we might end up trying your set-up as well.

Read more interesting tales from the travels of Landcrusing Adventure by clicking on the banner below: 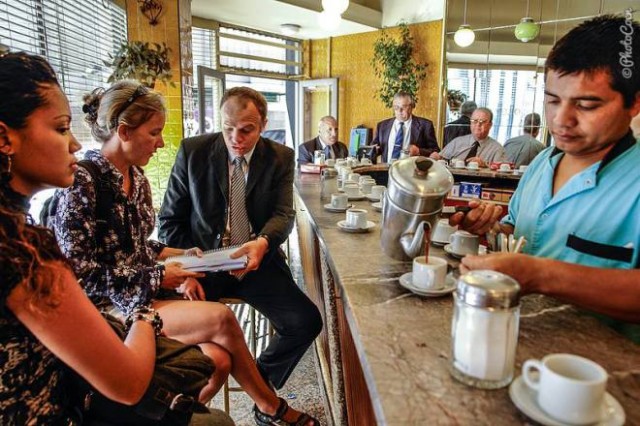 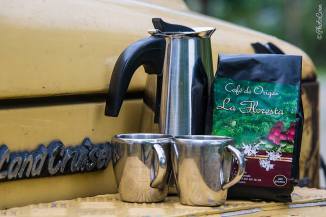 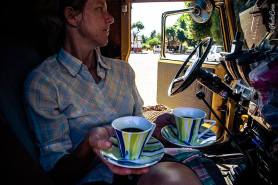 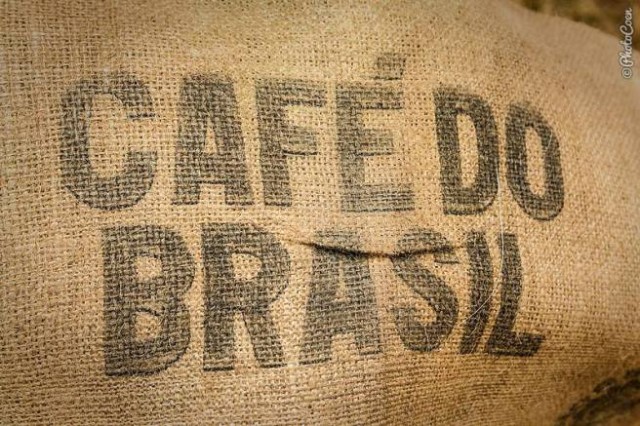 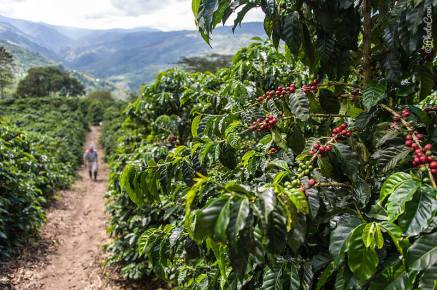 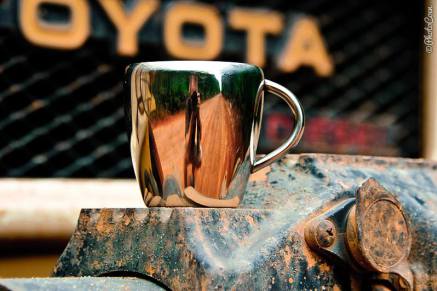 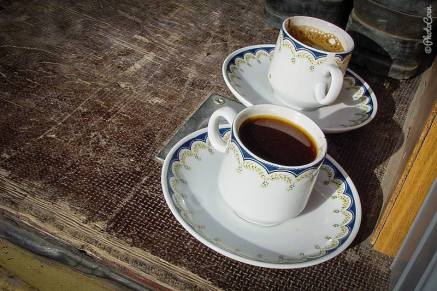 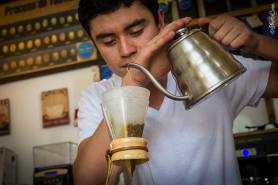