I’ve never ridden a bike with a sidecar or been a passenger in one. But after reading Carla King’s book, American Borders, and now being onto my second story about riding in sidecars, Our Ridiculous World Trip, by Matt Bishop and Reece Gilkes, I feel I’ve made the right choice. I don’t even want to sit behind anyone on a bike, let alone off to the side, skimming the ground, leaving my safety in someone else’s hands. Nor do I want to worry about flinging a passenger into the air when I take a left turn too fast.

See? I know nothing about sidecars.

I do, however, know the vintage motorcycles and sidecars on auction at Bonhams Sale July 2-4 are gorgeous antique specimens. Some come with an astounding $160,000+ price tag, like this Brough Superior SS100 1000cc Supercharged Special below. 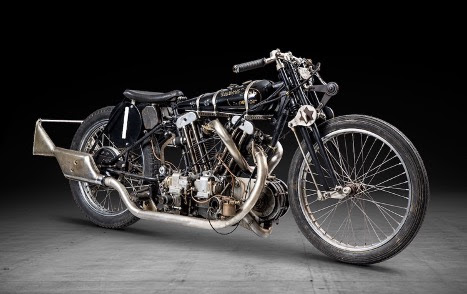 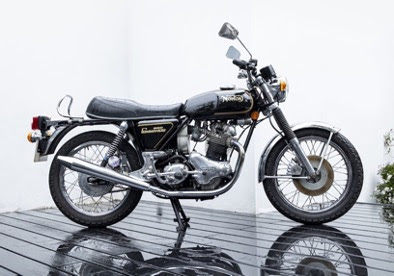 The auction isn’t only for the elite motorcycle collector, though it will surely appeal to anyone with an eye for classic bike beauty.

Below is an unedited press release on the auction event scheduled for next week. This might be your chance to acquire a motorcycle-with-sidecar combination from the roaring 1920s, so read on.

If you’re not in the market, the stories alone offer an intriguing historical view into the lives of these vintage recreations.

Press release, June 22—Superbikes from all eras, including a clutch of desirable Brough Superiors, will line up with a more sedate collection of vintage sidecars in next month’s three-day Bonhams Summer Stafford Sale which will present more than 330 machines from 2-4 July.

The Brough devotee and specialist’s objective was to recreate Noel Pope’s Brough Superior that set the outright motorcycle lap record of 124.51 mph at Brooklands 80 years ago, which still stands. Incorporating many original Brough parts, this stunning machine is a formidable recreation delivering the same power, speed, and smell as the original.

In its slipstream is another desirable example of the early superbikes, a 1931 OHV 680 ‘Black Alpine’, estimate £120,000 – 160,000, offered from the National Motorcycle Museum. Dubbed the ‘Miniature SS100’, this ultimate middleweight Brough was restored in the late 1970s/early 1980s and has been owned and displayed by the museum since. 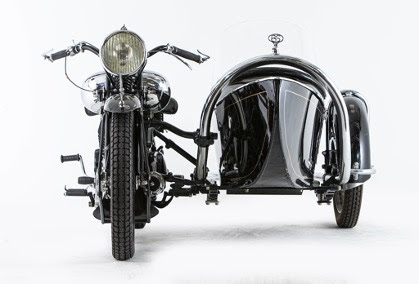 However, not all Broughs were destined for Brooklands or other racetracks. Fitted with a Petrol-Tube Sidecar, the third highlight from the British maker, a 1937 1,096cc 11-50, estimate £55,000 – 75,000, was delivered new to the Sheffield Police force. The largest model of the marque was still capable of a top speed of 90mph solo and an impressive 75mph with its sidecar. Living up to its ‘Superior’ name, this combination was the finest of its time, with the sidecar offering comfort with its red leather interior, exterior luggage rack and even mascot. 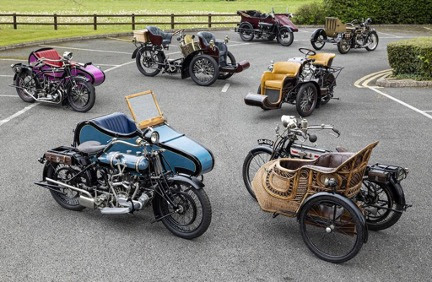 Along with the Brough, the Stafford Sale will be offering a collection of ten sidecars, tricars and hybrids from the National Motorcycle Museum. Representing the golden age of vintage motorcycling, highlights include an extremely rare 1923 Martinsyde Motorcycle Combination, estimate £22,000 – 28,000, produced by the former aircraft manufacturer, and a 1925 Seal 980cc Family Motorcycle Combination, estimate £16,000 – 20,000. This unusual motorcycle/car hybrid is one of only two known survivors and has its controls, with a car-type steering-wheel, inside the sidecar, which can carry two adults and two small children. 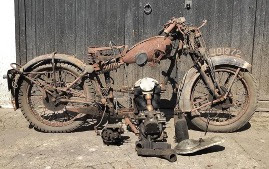 Bonhams Motorcycle Sales are always fertile ground for presenting long-hidden ‘barn finds’ and never-completed projects. The Summer Stafford Sale continues this tradition, being peppered with fresh to market machines that have not seen the light of day in years or even decades.

…To a Rockstar’s motorcycle

A rather shinier motorcycle, with a touch of stardust, is the 1973 Norton Commando 850 Roadster offered by the family of the late Keith Emerson, estimate £5,500 – 7,500. This was the second Commando for keyboard maestro and founder member of the 1970s ‘prog rock’ group Emerson, Lake and Palmer, who bought it to replace his first, he used to commute from his Sussex home to a London recording studio, which had been stolen.

The sale will be a traditional live auction, welcoming bidders back into the saleroom, in addition to being streamed and available via Bonhams.com and on the Bonhams App, providing registered bidders the opportunity to bid in real time online. Absentee and telephone bids are also encouraged.

Friday:In accordance with the latest Covid-19 related guidelines, numbers will be limited in the saleroom, so viewers should register in advance with the Bonhams team: ukmotorcycles@bonhams.com.

Saturday/Sunday:Entry to the International Classic MotorCycle Show and Bonhams Summer Sale Auction is by ticket only, which must be purchased in advance at www.classicbikeshows.com or by calling 01507 529529.

Ticket numbers are limited for both Saturday and Sunday and will no longer be available when the maximum capacity is reached for attendance. There will be no tickets sold on the day.

Bonhams, founded in 1793, is one of the world’s largest and most renowned auctioneers, offering fine art and antiques, motor cars and jewellery. The main salerooms are in London, New York, Los Angeles and Hong Kong, with auctions also held in Knightsbridge, Edinburgh, Paris, San Francisco and Sydney. With a worldwide network of offices and regional representatives in 22 countries, Bonhams offers advice and valuation services in 60 specialist areas. For a full list of forthcoming auctions, plus details of Bonhams specialist departments, please visit bonhams.com.