If there’s a dull, muted colored Land Rover Series taking a well earned rest in front of the aqua blue Puerto Rican seashore and a wispy green Puerto Rican palm, do the sea and the palm respect the Series’ heritage with the same fervor as the Series respects the island?

Add seventeen more Series vehicles and put them in order, circling the entirety of their Caribbean home. Add the sun-worn faces of tomato growers on the south of the island, add the air conditioned but stressed late-model European sedan owners in traffic jams in a city with 3 million people. Add the ancient petroglyphs of native Taíno indians, a surfer dude catching waves on the northwest shore, a 400 year old Spanish canon still holding post over San Juan harbor, and an economy boosted by using Series vehicles to do the heavy, muddy, tropical lifting on its coffee plantations. 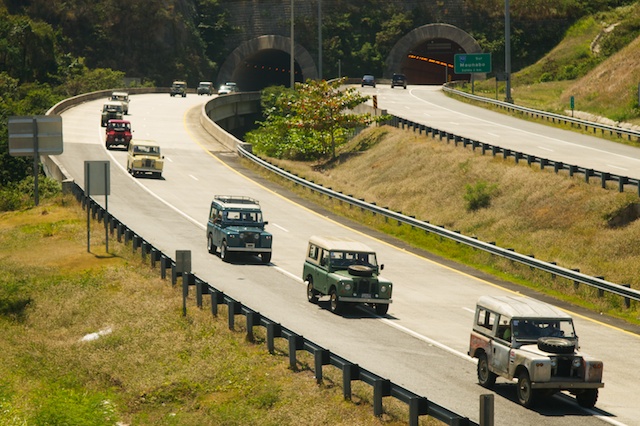 There exists a hard earned connection between Land Rover Series vehicles and the island of Puerto Rico. These are two proud old workhorses that share an island time pace of relaxed but dutiful daily living, and humbly go about their business regardless of what the world, and time, throw in their way. Here, criss-crossing the 18th parallel north, the Land Rover Series Club of Puerto Rico set out to celebrate both by establishing the first Land Rover based Circle Tour of the island.

On a friday morning in March we took Highway 1 east from the southern city of Ponce. This old road gives a glimpse of the slower pace of life during her tenure as the main route over the mountains connecting to San Juan. Flirting with the Caribbean Sea, we passed tomato and sugar cane fields, a tiny airport, and several smaller town gawkers, staring at us as we meandered by. We wondered if these people were interested in the trucks simply out of curiosity, or were they thinking back to their own youths, when these trucks were working on the farms? In the 70’s the state built the expressway up to San Juan, and left Highway 1 to carry on at her old pace, which suited our Rovers nicely. 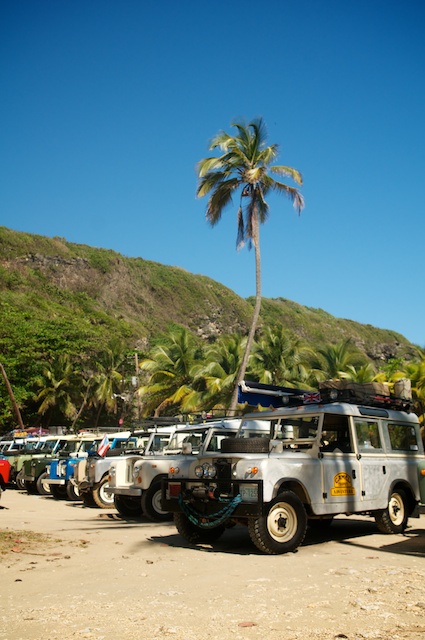 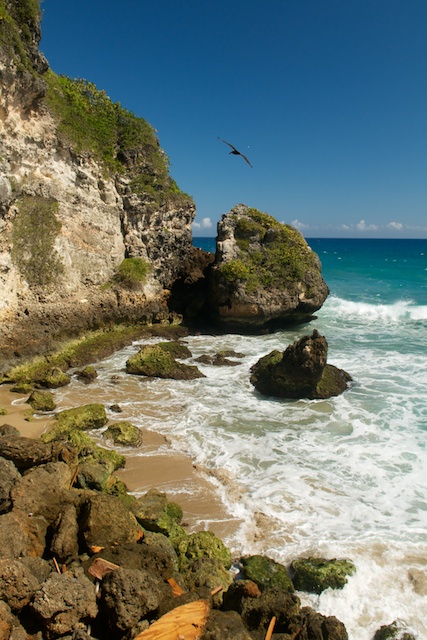 As the highway turned north at Salinas, we continued east and stuck to the shore. Just past Patillas we stopped at a small beachfront restaurant for a deep fried Puerto Rican morning snack. Some of us dipped our toes in the beautiful Caribbean Sea, the rest ate empanadillas (small stuffed bread/pastry, deep fried), bacalao (deep fried cod fish) and alcapurrias (fritters with plantain/root shell and meat filling, deep fried) while doing standard Series activities, like checking fluids and using hammers and crow bars to remove door tops.

We continued along the coast as the road climbed from sea level to 900 feet, giving us views of the Caribbean Sea out over the historical Faro de Punta Tuna (Tuna Point Lighthouse). A little further east we stopped at Restaurant El Nuevo Horizonte (The New Horizon Restaurant), which sits spectacularly at 700 feet above the sea. With its setting back from the shoreline, the views start high atop the ridge and carry down past beautiful beaches and endless miles of sea. We lingered and enjoyed each other’s company before pushing northeast, passing in and out of the afternoon shade of the 3,543 ft high El Yunque rainforest. We ended Day 1 in Fajardo. 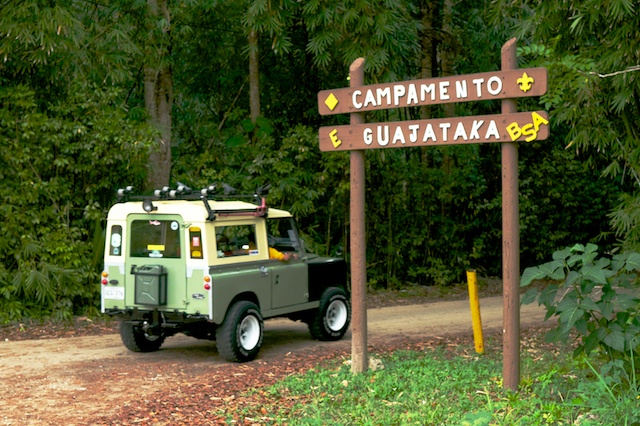 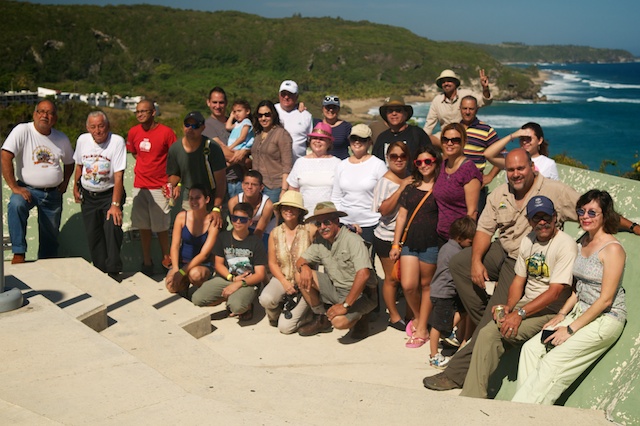 Series vehicles will show their commitment to a worthy cause. Though there were a few mechanical issues on the first day, all the trucks roared in to action Saturday morning to tackle expressway speeds and traffic on the way from Fajardo to the oldest city in the United States, Old San Juan. After lining up in front of El Capitolio (the Capitol Building), we wound our way through the most historic city in The Caribbean. Some of the streets are still paved with the original blue colored adoquine bricks, which were used as ballast on the empty ships arriving from Spain. On their return trips, the ships carried gold, silver, sugar cane, and more.

Back on the expressway, we continued west to Arecibo, and then south through Lares. Giving our trucks the opportunity to climb up to altitude in Coffee Country really let them shine. It was as though they recognized they were close to their muddy working past, and also driving the same roads the Jibaros (farmers) of Lares marched when they rose up against their Spanish rulers in 1868. At 2:00am, with a flag planted in front of the church in the town square, the rebels proclaimed The Republic of Puerto Rico as a free and independent government. By the following day, the Spanish had crushed the rebellion. But for over 24 hours, Puerto Rico was a free nation, ruled by neither Spain nor the USA. Our Rovers understood the independence those roads represented, and their nostalgic enthusiasm carried over to all of us. We spent the night along the shores of nearby Lake Guajataca. 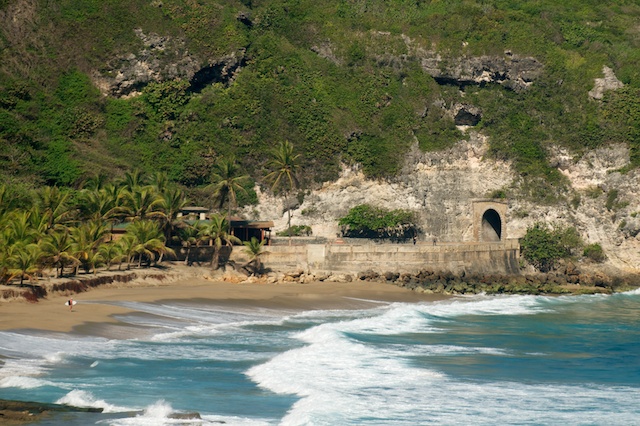 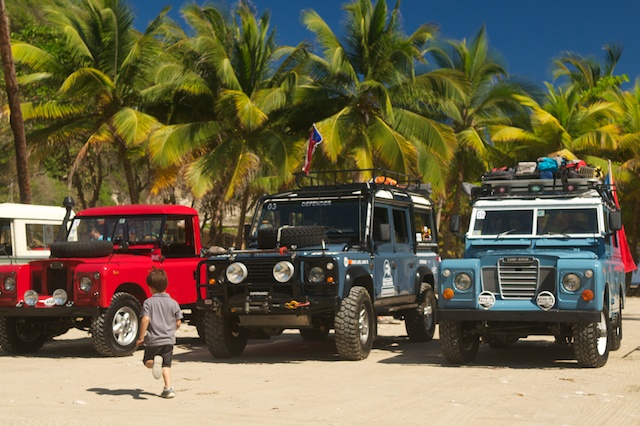 Sunday morning we returned to the Atlantic Ocean on the north shore. We held the official Circle Tour Raffle at an impressive roadside stop overlooking the Guajataca Tunnel, which connected the national railway system between the towns of Quebradillas and Isabela during the first half of the 20th century. Thanks to our sponsors from Rovers North, Caribbean Rovers, and personal donations, we proudly passed out classic Land Rover prizes, including gift certificates, hats, stickers, and more.

We kept our pace past the surf beaches in Isabella, on through Aguadilla, Mayaguez, and around the southwest corner to the dry side of the island. That’s right, dry. The Trade Winds bring moisture filled air toward the northeast corner of Puerto Rico. The moisture gets trapped by the height of the El Yunque rainforest, and turns back on itself, creating 225+ inches of rainfall per year. This “rain shadow” leaves the south and southwest of the island cactus dry, averaging less than 40 inches of rain, and some areas as little as 20-25 inches.

The sun fierce, we were anxious to get back to Ponce, and the very spot from which we started the circle tour three days before. Passing Guanica, the historic city where the US mounted its invasion of Puerto Rico in 1898,, we were close to the end. Approaching 5pm, with one sunburnt arm still hanging out the topless windows, we pulled over for the final time beneath the gigantic P-O-N-C-E letters. For a few days in a vehicular battle of attrition beneath the Caribbean sky, we saw life with the most relaxed of eyes. Guided by an island with a rich historical beauty only rivaled by the historical beauty of Land Rover Series vehicles, we won the battle. . . On island time. 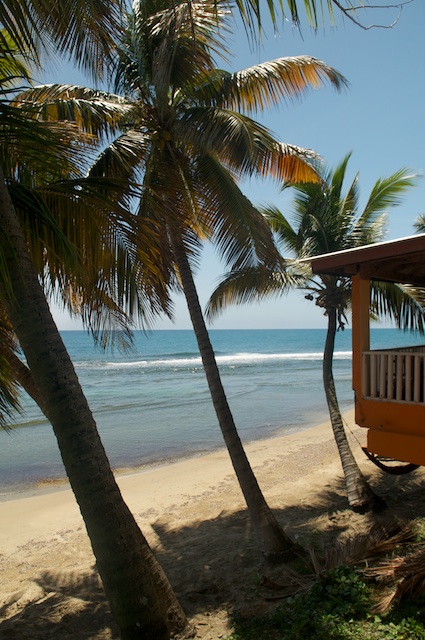 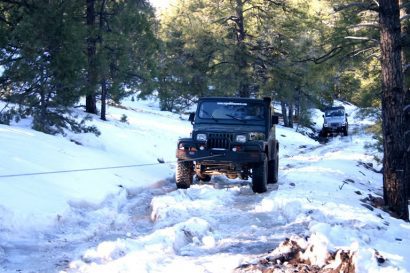 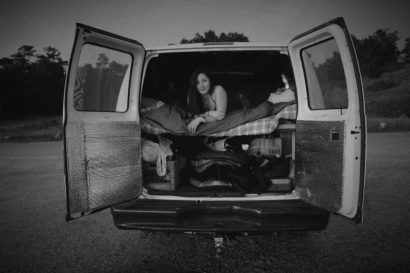 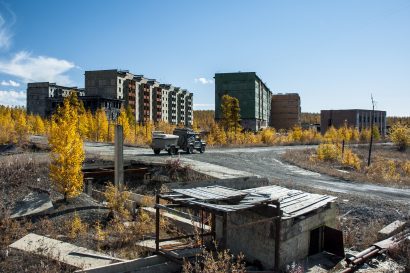