One Lada Niva or UAZ Hunter after another came bumping down the trail, the vehicles packed with people. What was going on? Weren’t we going to a super remote place deep in the Uzbek mountains, a place that “everybody” told us to visit?

“You have to go to Urungach; it’s the most beautiful place in the mountains,” they said while pointing it out on Google Maps or our Reise Know-how paper map. The spot was still somewhat of a novelty. Under the old regime of Karimov, the area had been off-limits. Only when the current president, Mirziyoyev, came to power in 2016 was the region opened up. 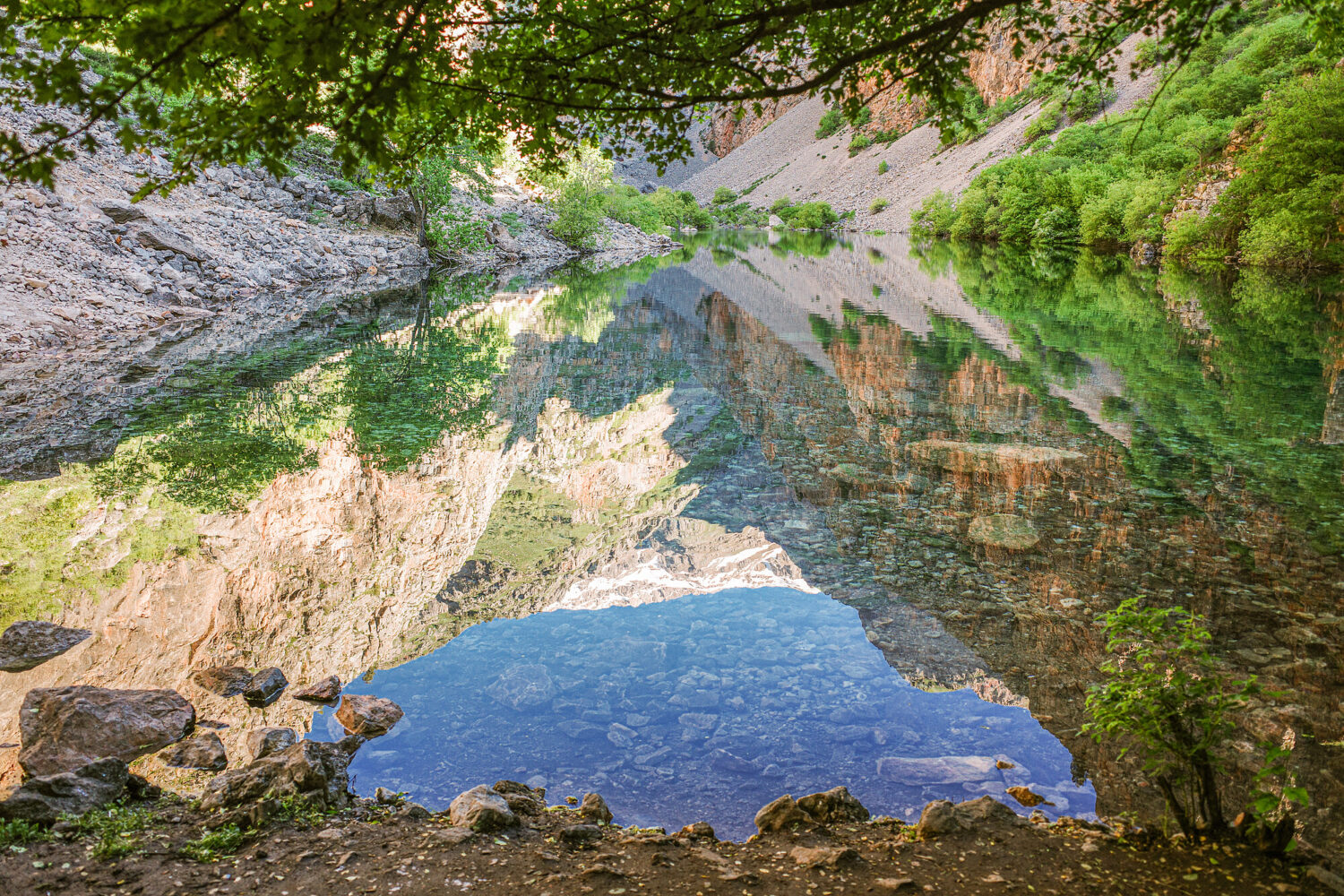 Coen had been in Kazakhstan and Uzbekistan for some weeks to take care of the Land Cruiser’s paperwork. The car had spent more than a year in a parking lot due to Covid, and its temporary import document was about to expire. For the first time in 18 years on the road, Coen and I had been apart for longer than a week or so, with me staying in the Netherlands due to family circumstances. So when I finally flew to Uzbekistan, we were more than ready for some “we” time.

What would be a better place for this than deep in the mountains, wild camping along Uzbekistan’s “most beautiful lake”?

The trail was mostly one-vehicle-wide. Drivers would look down the trail, anticipate, and stop way before our vehicles could pass abreast at a wider spot. They were the politest drivers ever, not Uzbek style at all. For some context: driving in Uzbekistan is like being in a racing video game. Asphalt without lines, overtaking left and right, playing chicken with oncoming traffic, and indicators are for decorative purposes only. There’s one rule you obey: you stop at a traffic light. 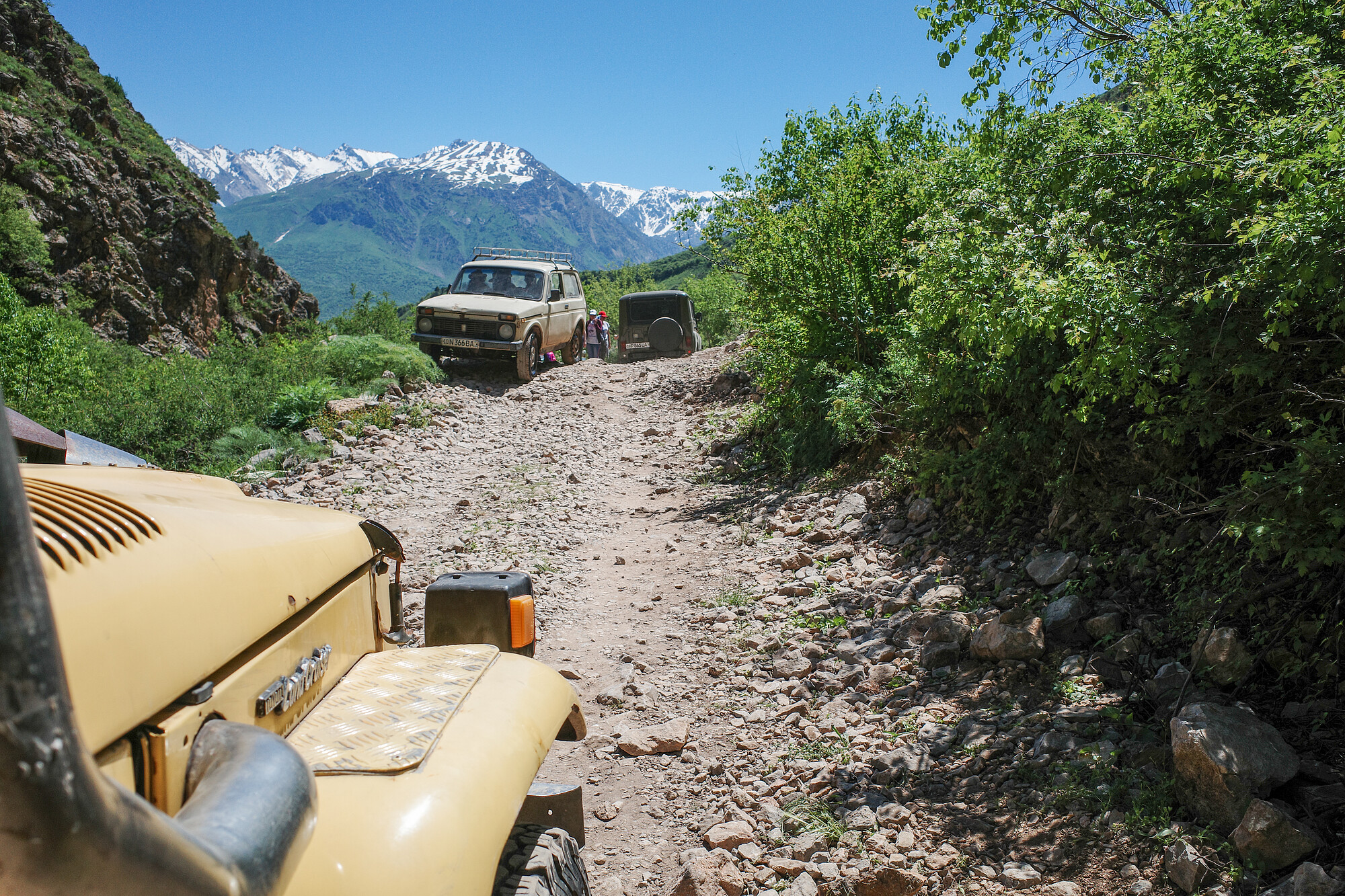 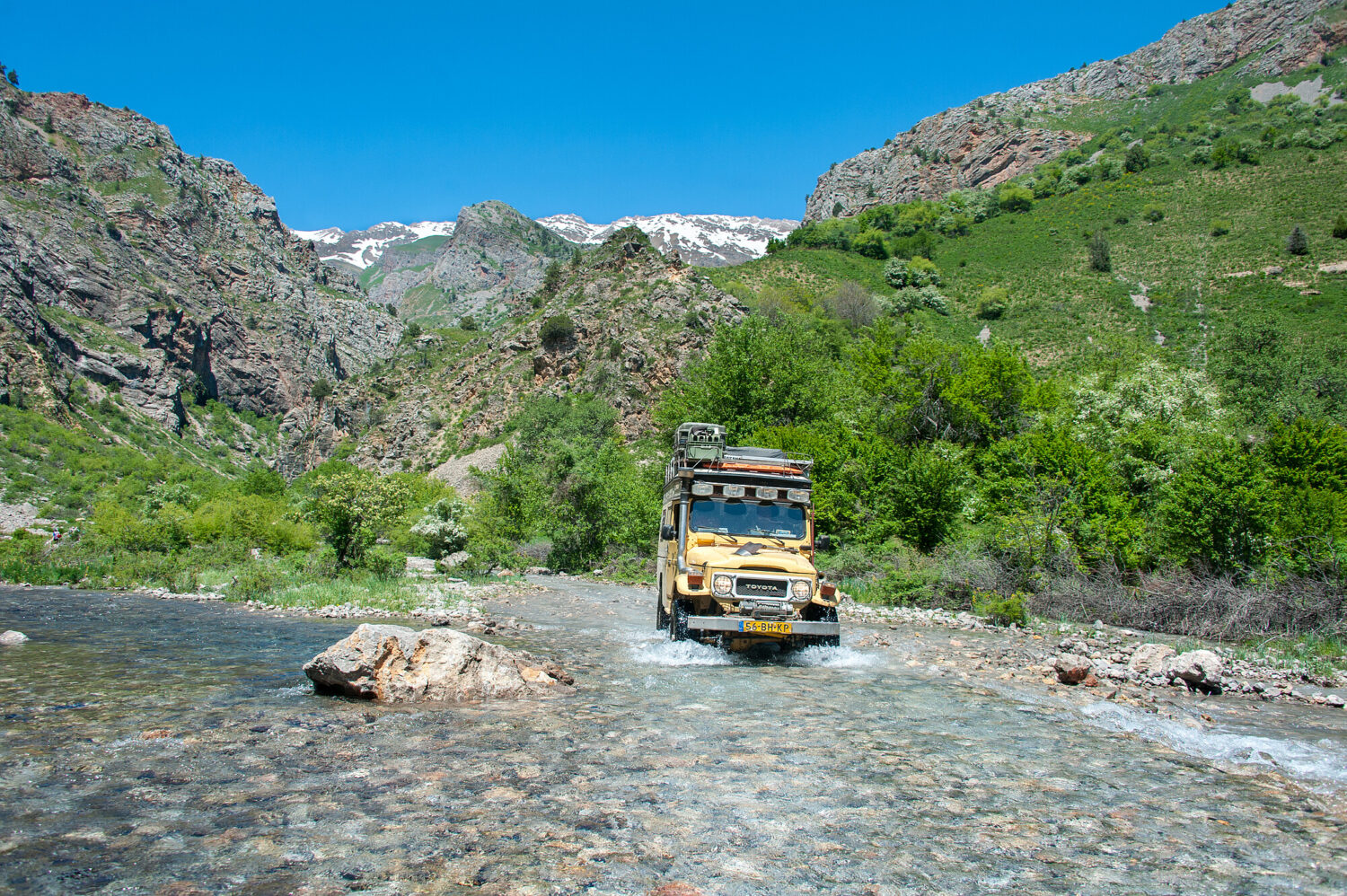 No traffic lights on this trail, though, which cut through the Ugam Chatkal National Park. Unpaved, eroded, and full of potholes, it requires a high-clearance vehicle. The Land Cruiser crawled uphill, often in low gear, which gave us ample time to try and solve the puzzle of all these vehicles on the trail and to take in the surrounding landscape: rolling green hills with yellow flowers, streams with ice-cold water (I know because I got out the car, waded through the water to take a picture from the Land Cruiser traversing it), and mountains rising in the distance with remnants of snow. The views were gorgeous. 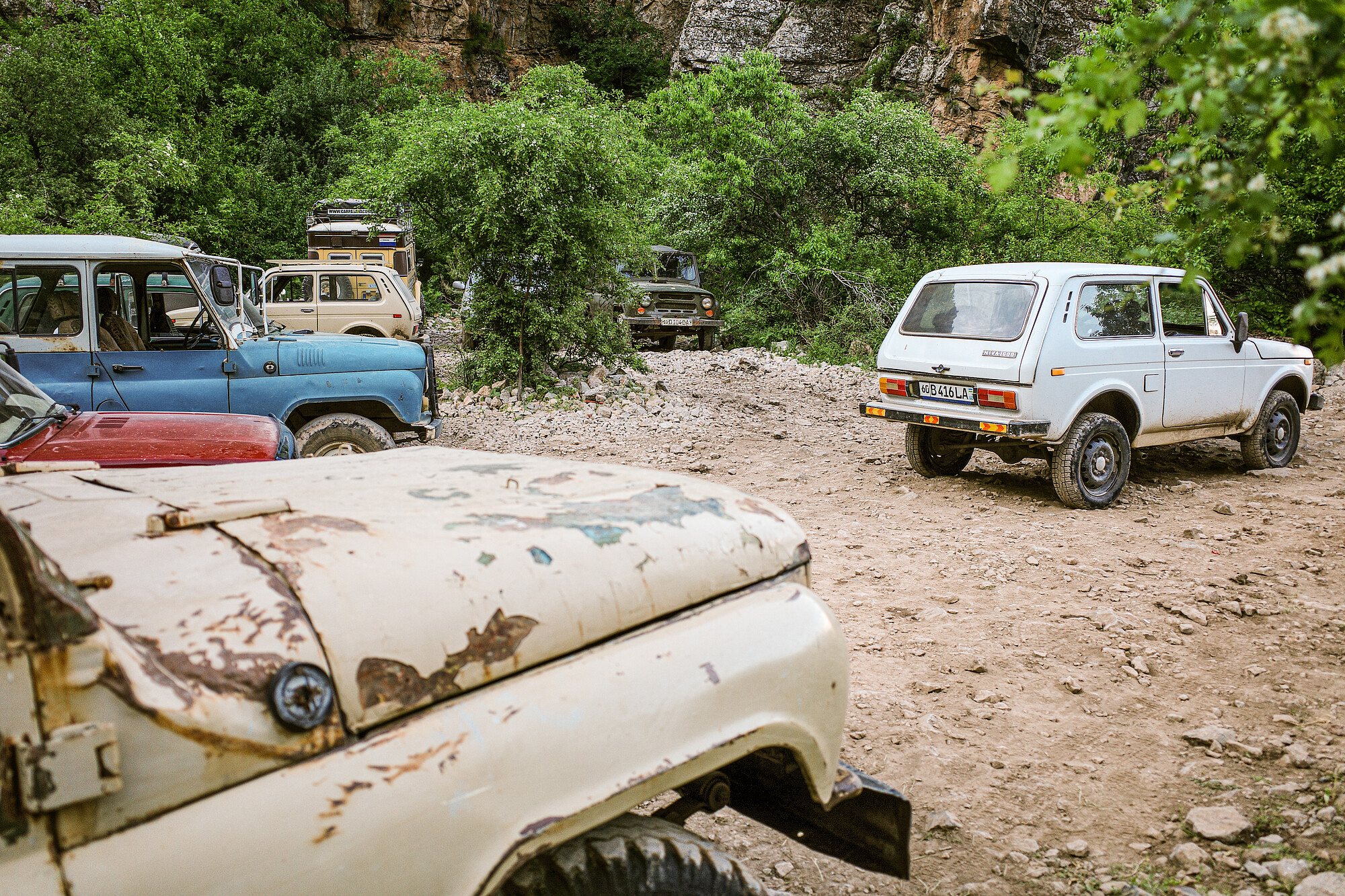 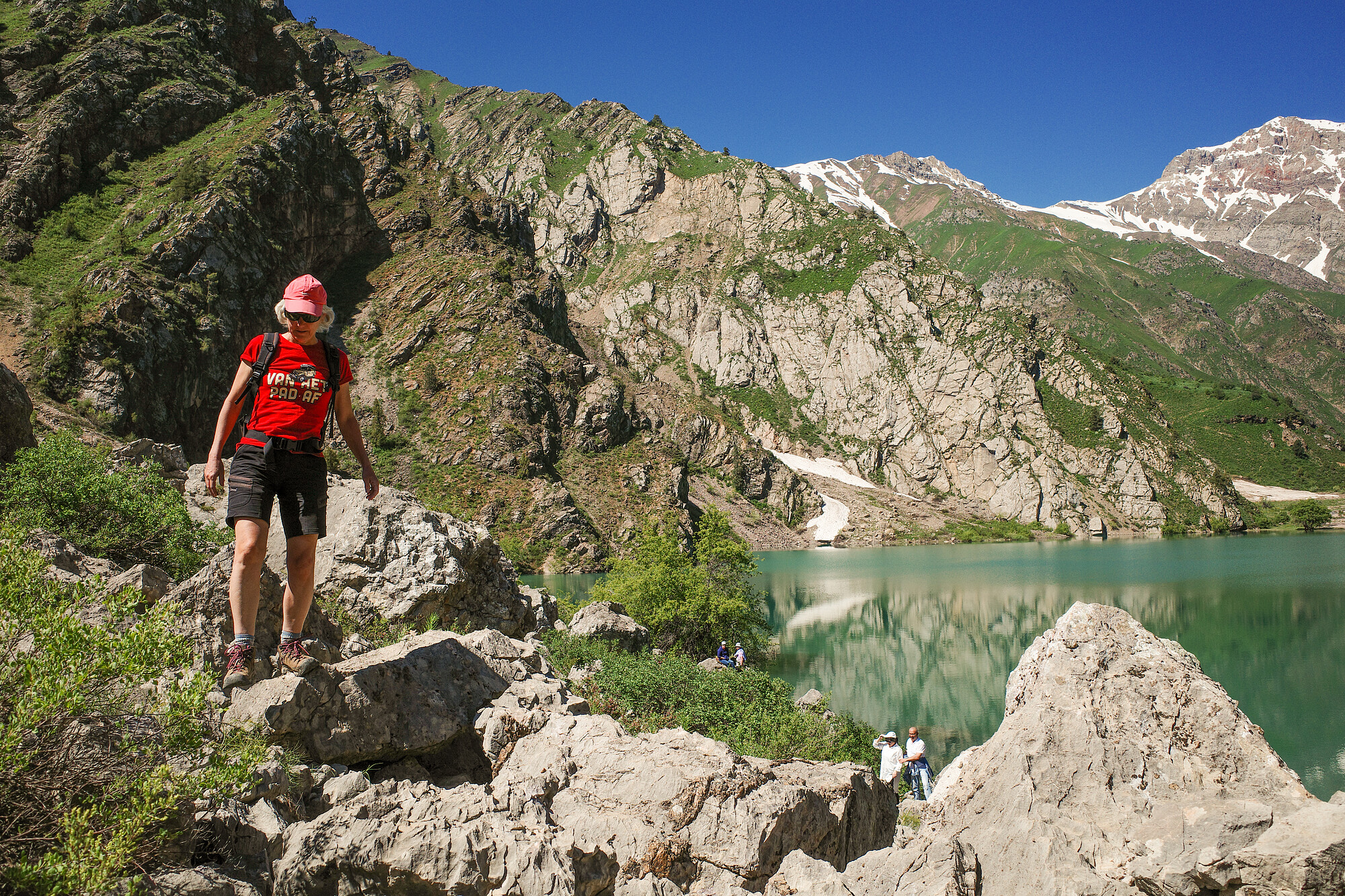 The trail ended abruptly with just enough space to make a loop around a small tree. The place was packed with visitors getting into vehicles to return home. It was late afternoon, and the sun was about to disappear behind the mountains. Our moderate BJ45 seemed humongous among these short vehicles, and there was little place to park it without blocking the loop for the local vehicles to turn around.

Behind the dead-end road stretched a shaded area under trees, jammed with people picnicking, taking selfies, sploshing in the lake, and thoroughly enjoying themselves. We needed a moment to shake our minds free from expectations of finding ourselves alone in a gorgeous wild camp. 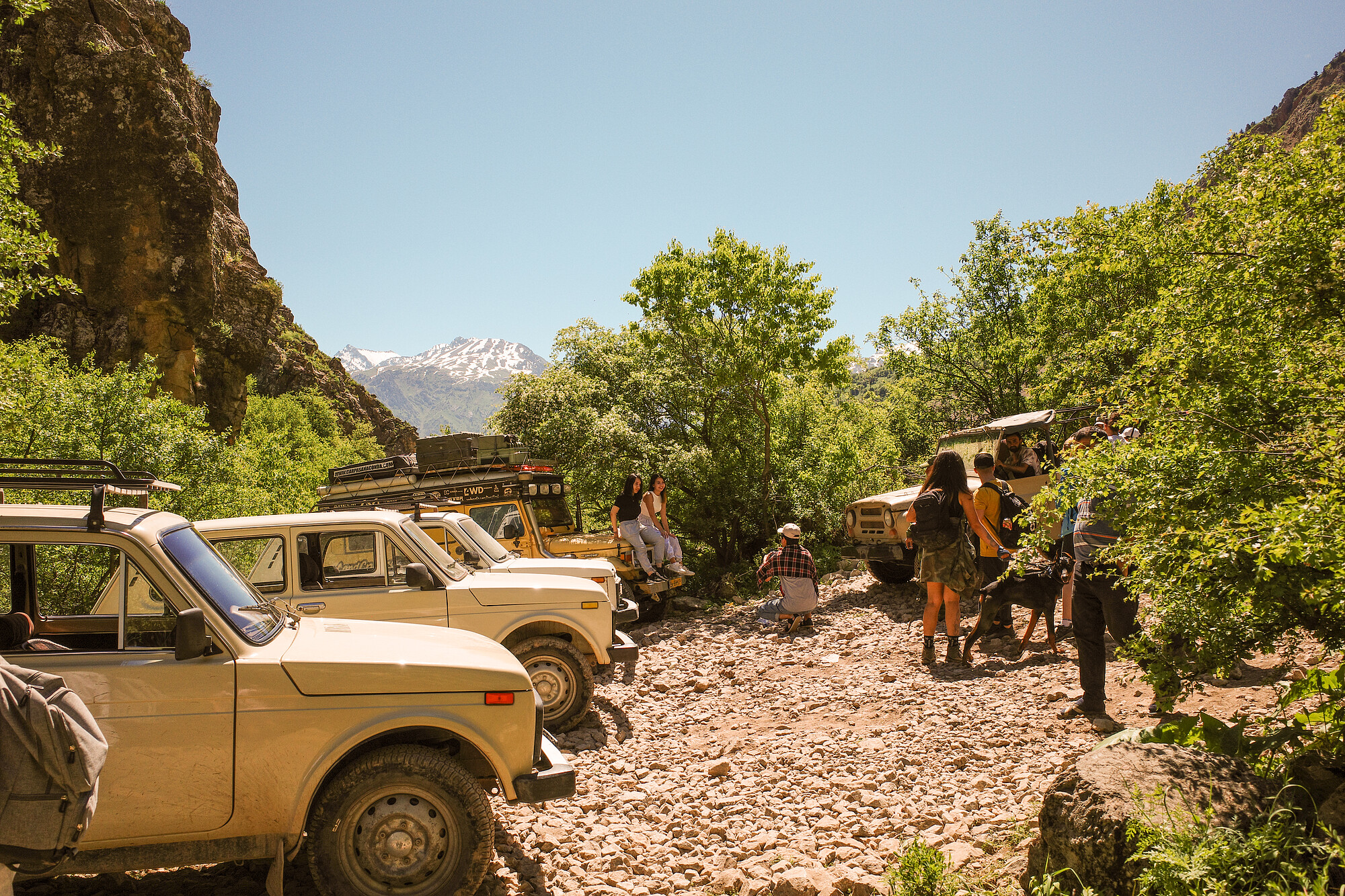 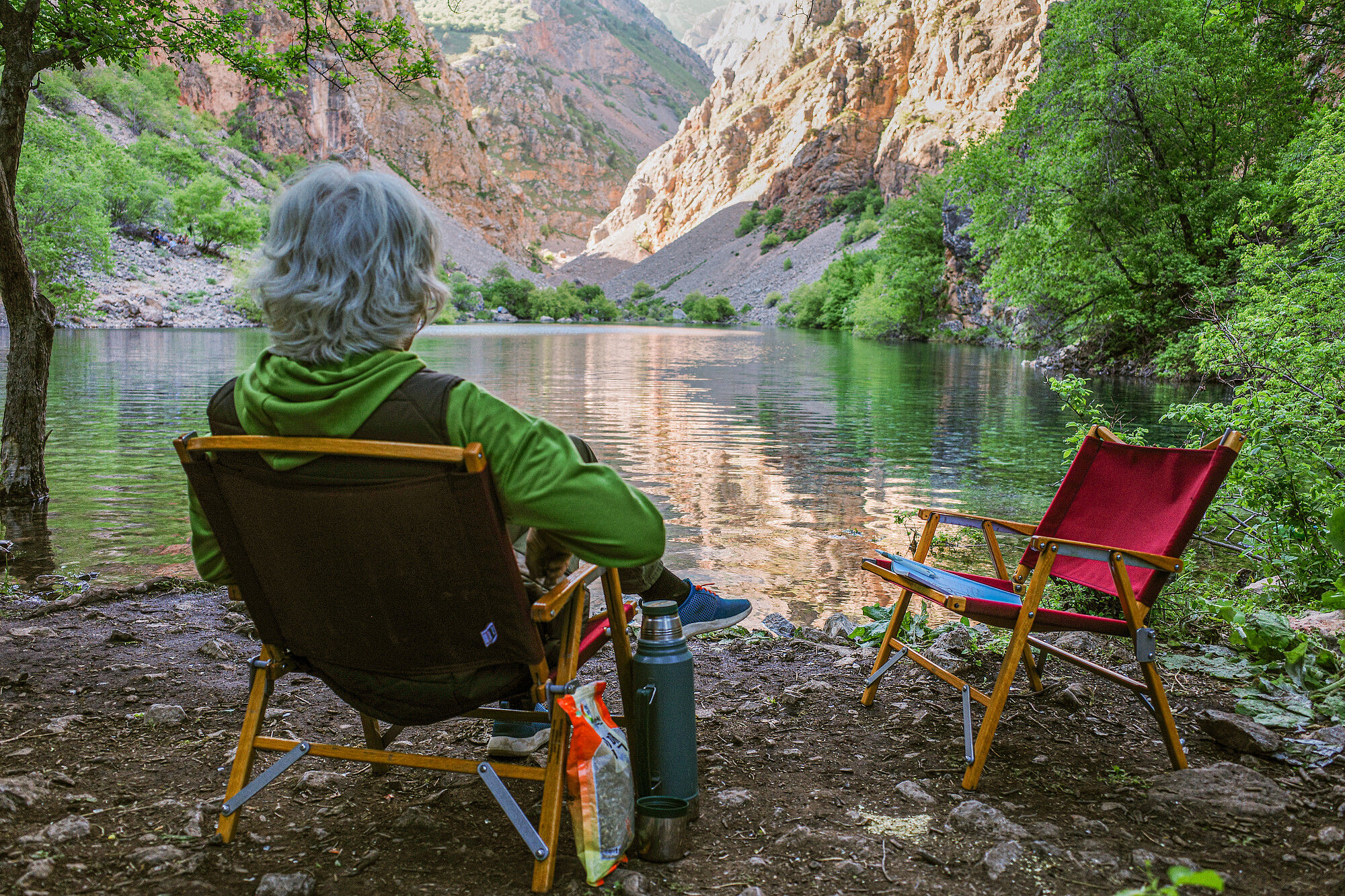 Ramadan had just ended, and this heralded a four-day holiday. The inhabitants of Tashkent were fleeing the rising temperatures in the capital to enjoy a couple of days in the mountains. It is easy to see why visitors come here. The region is indeed spectacular. Hemmed in by a vertical mountain wall on one side and lower hills on the other, a river widens into Urungach Lake with translucent, blue, turquoise, or aquamarine water, depending on the angle you look.

Most Uzbeks drive white, modern, low-clearance vehicles; we have dubbed Uzbekistan the “Country of White Cars” as 90 percent of the cars are white. Since such low-clearance cars can’t drive this trail and there wouldn’t be enough space to park them all at the far end, they were parked in fields at the beginning of the trail. It provides locals with great job opportunities to serve as taxi drivers with Lada Nivas and UAZ Hunters. 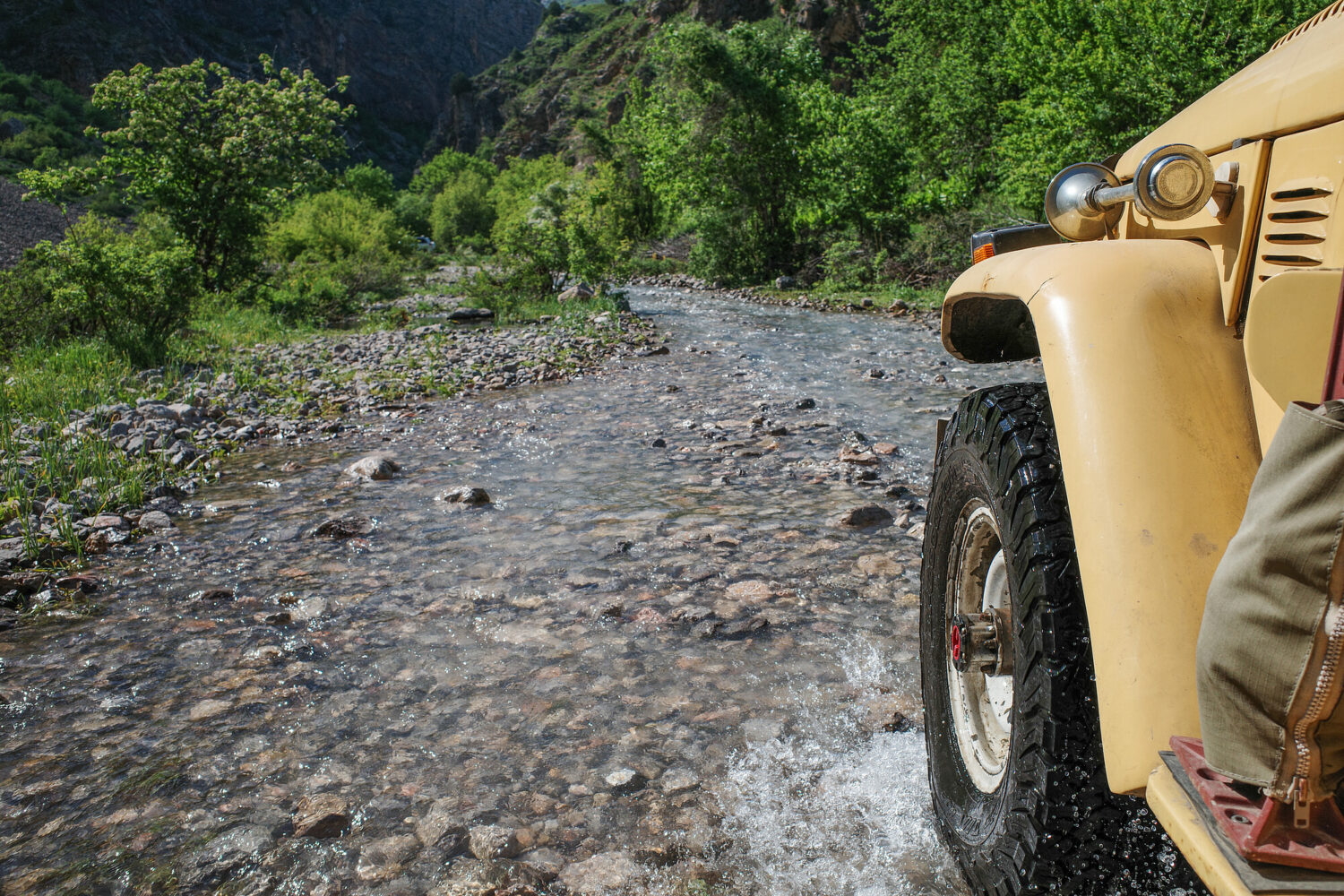 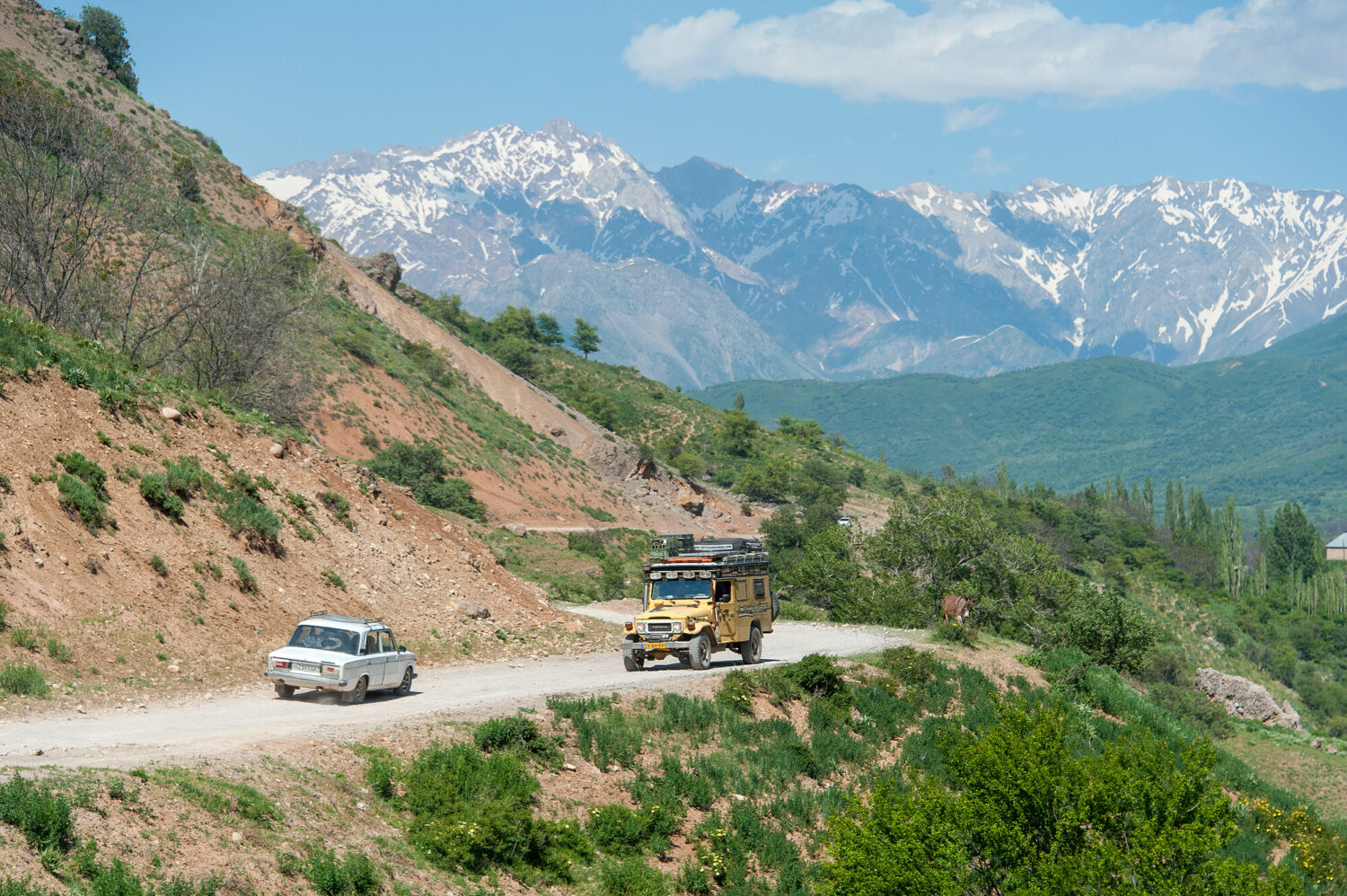 It was the perfect place for a day outing with beautiful weather. Visitors admired the views, the courageous took a dip, and we joined the early birds next morning for a hike to another beautiful lake deeper in the mountains. It was not, however, a place for wild camping.

And so, after our hike the next morning, we hit the trail once more in search of solitude. As we were driving down the rocky trail, it was now the Lada Nivas that were driving uphill, packed with new visitors, and we gave them the right of way where needed. 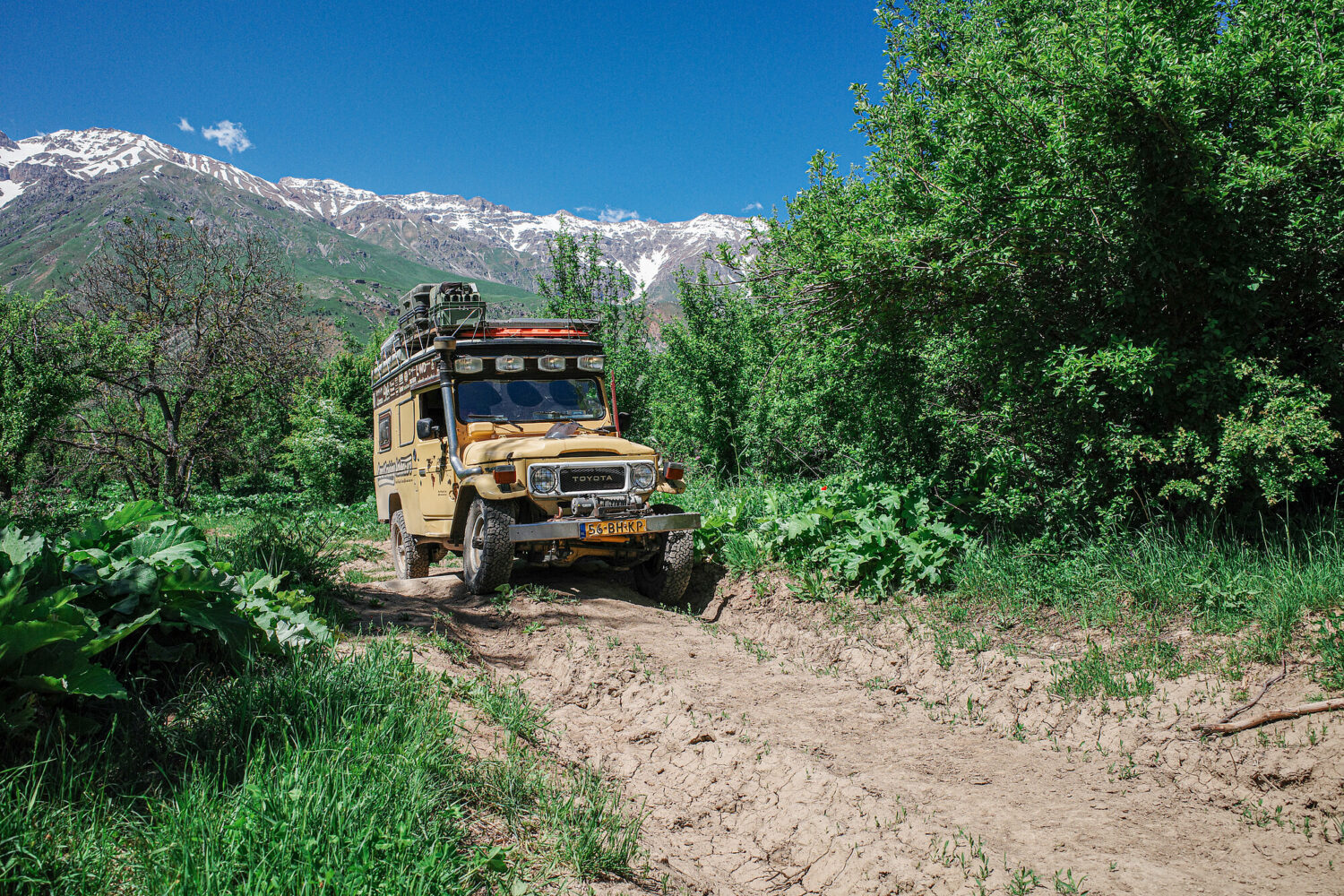 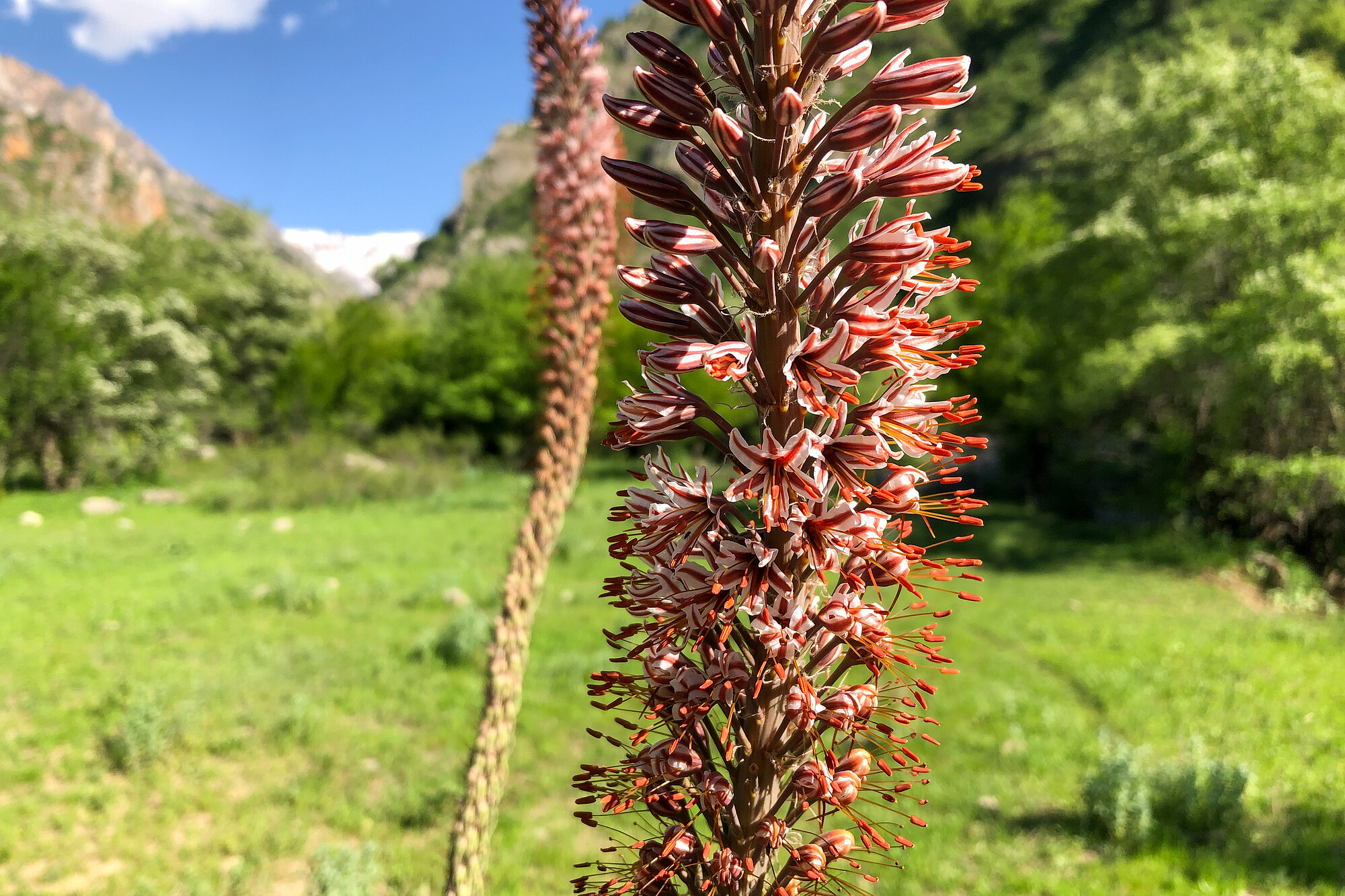 When we arrived at the fields where all the cars were parked, we picked a random side road. A well-maintained, unpaved road traversed two hamlets which seemed straight out of the nineteenth century. Not even a satellite dish or small solar panel betrayed the presence of any modernities in the setting of adobe houses, fences made of branches, and vegetable gardens big enough to sustain a family throughout the year.

We crossed a bridge where soldiers required us to register, as happens in other remote border regions, and we studied an online map. Tracks were going in every direction, but we had been given another point of interest, Badak Lake, and decided to check it out. We picked one of the trails vaguely heading into the right direction, happy to be chugging through vast fields full of soft-pink flowering fruit and almond trees. As the saying goes, traveling is often about the journey, not the destination, and we thoroughly enjoyed the drive. We had reached our goal: we were definitely all by ourselves as far as we could see in the distance. 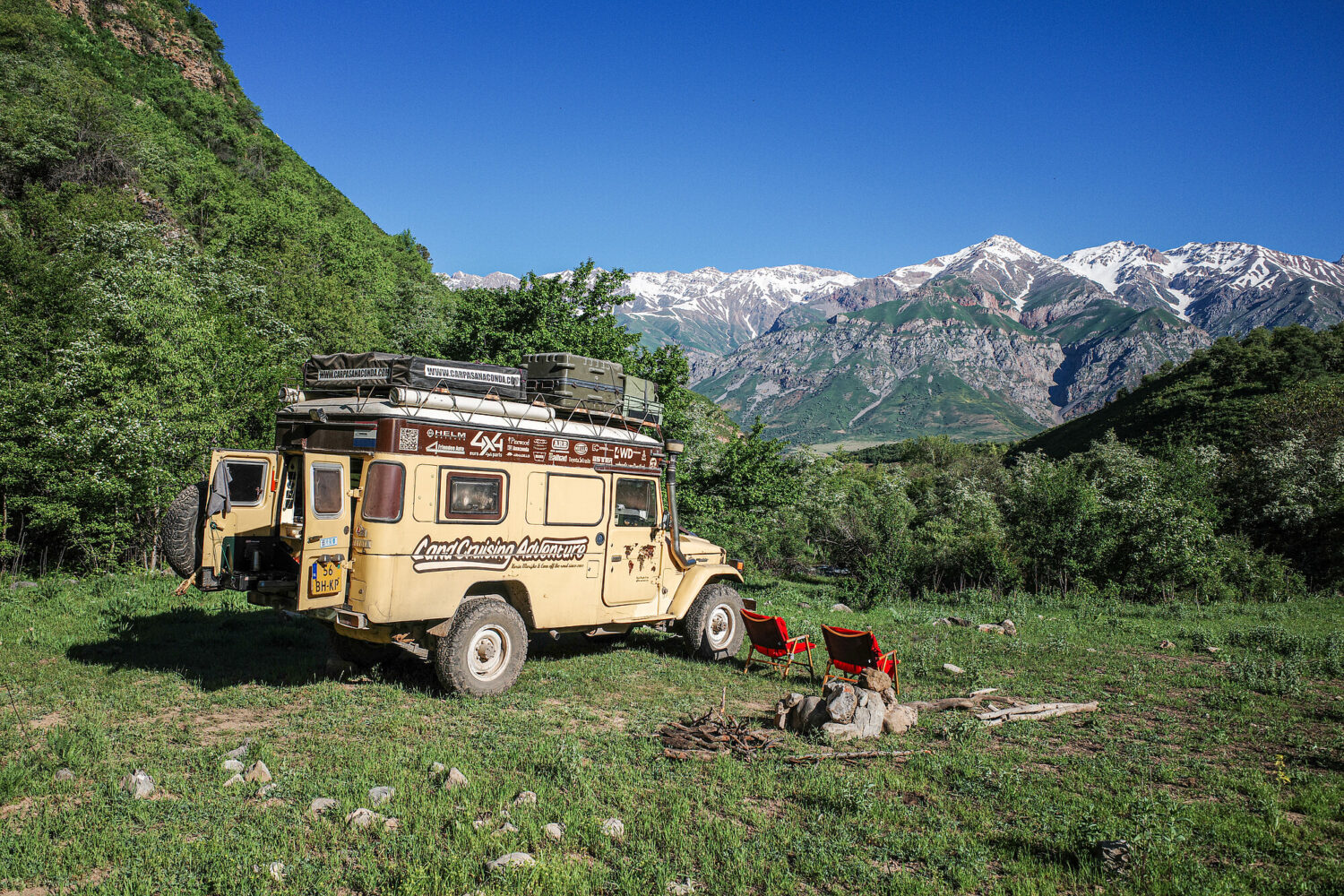 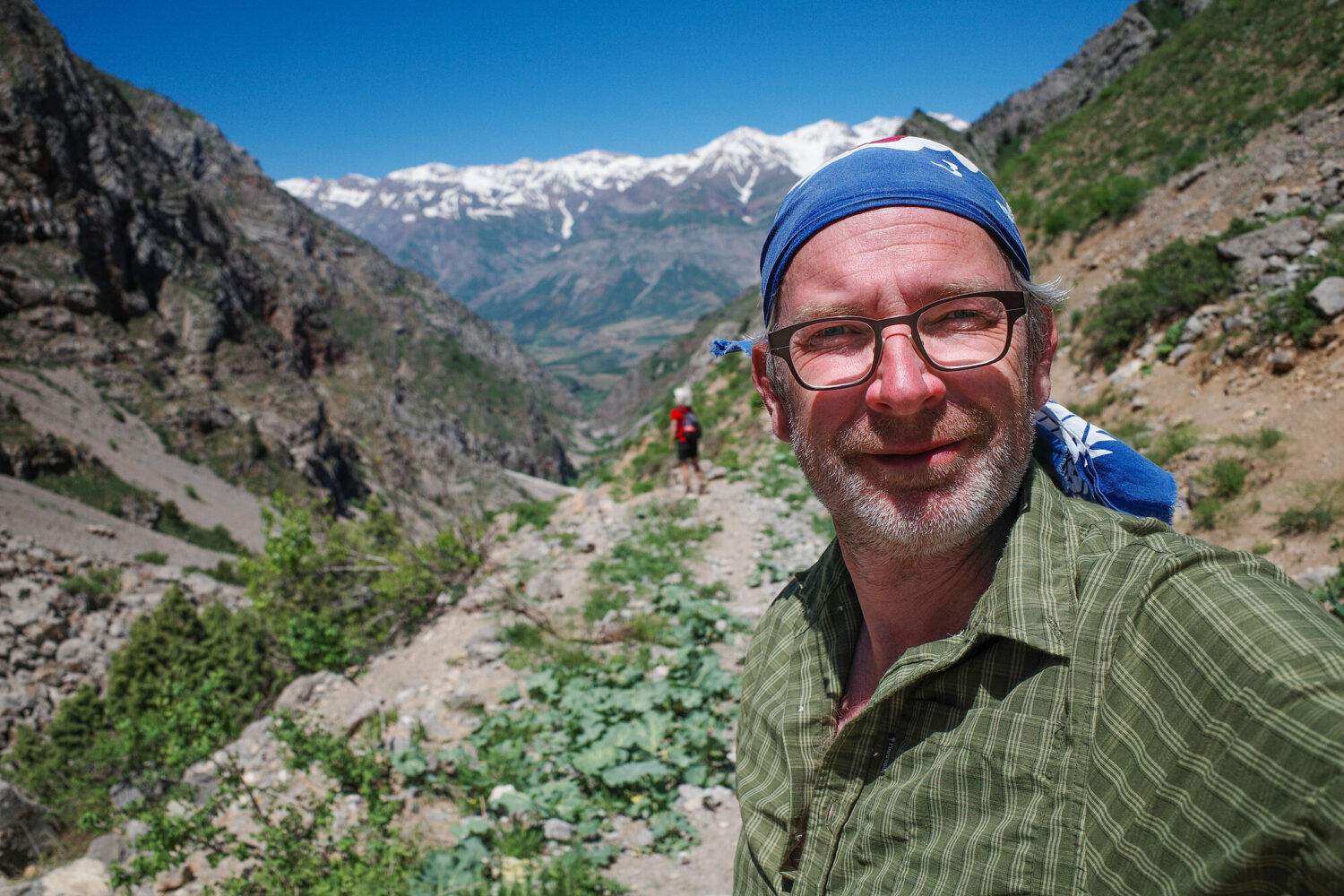 Fields were bright with yellow and purple flowers and bushes. Spring had started in earnest. On the map were many streams but most had dried up, as had a few small lakes. We chugged on, determined to find that perfect spot. We passed a small solitary farm, the owners sitting outside and putting up their hands in greeting, left the wild orchards, hit a regularly used, unpaved trail, and beyond the curve, drove downhill.

“Look! There it is,” I exclaimed. Sometimes you just know: look no further, this is it. Here was a wide field, a 6-foot wide river, no people. We had found our little paradise for the next couple of days.