Life has taught me to at least appear humble. I have a childhood friend who somehow got it into his stubborn mind that he would never, ever apologize. He is a miserable, wealthy adult. I am relatively poor but proportionately happy. I say sorry. As my Brazilian friend Rafa (pronounced Haafa) likes to observe about his marriage, “I would rather be happy than be right.” I was not right about the Poolahoop.

Many of you might have seen the mannequin at Overland Expo West last year, sitting outside on a bucket. I wondered about that cold man but never took the time to ask, being inundated with the endless activity of acting important and trying to rectify my state of poverty. Eventually, on the last day of the show, I meandered between the stalls being packed up in the rain, flaunting my media status in the search for freebies to review. Well, the one freebie I received I never expected. The inventor of the Poolahoop recognized me from the movie in my own head, called me over and, proudly, offered a plastic gadget suspended from a lanyard bearing the legend, poolahoop.com. I could not figure out what this contraption could possibly be used for. It took a while; there were only a few clues. Being the monk I wish to be I pieced it all together. “Poo,” must be something to do with poo. “Lahoop?” I had no ideas. Or was it a Pool-Ahoop? Too small, surely? I then studied the mannequin with now sodden khaki pants around his pale, hairless ankles, a strained smile and a wet toilet roll dangling from his neck. I began to laugh. The inventor began to laugh. The guy with the cool blue, wood-paneled, Instagram-famous old Jeep on fat tires began to laugh. We all laughed. The inventor stopped laughing. 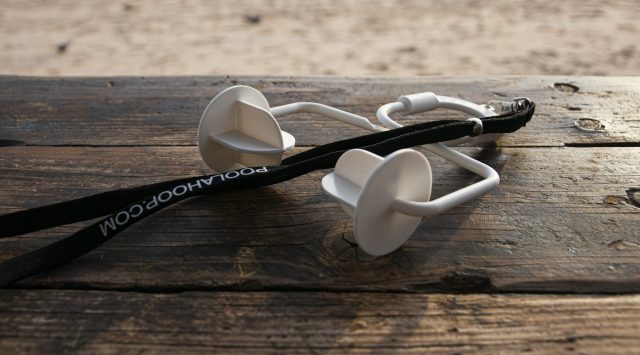 Later, en-route to Little Caesar’s for our traditional post-Expo coronary, my family could not fathom the purpose of the naked plastic contraption while I sat smug as a flash-card-informed game-show host. After 10 minutes of guessing, the wife lost her sunburned patience and demanded an answer. She scoffed when I revealed the true nature of this invention and reprimanded me for wasting her time. The kids groaned. Dad is such a loser. It seemed the Poolahoop would be donated to the Salvation Army along with our rusted Coleman metal plate set, the Volcano grill, and a Spork. A voice in my head told me to not give up on the creation until I had tried it at least once, and I tend to obey the voices. One day, a few weeks later, we were camping in the desert, and I needed to do the walk of shame. As a journalist of unquestionable integrity and insatiable curiosity, I decided to load the Poolahoop and head out, shovel in hand.

What a game changer! Hands free, it just hangs there, from your neck, your chest the bathroom wall. You do your business and without missing a beat unroll the desired amount of two-ply and take care of business. The paper spools perfectly, as if on well-greased Timken bearings. Returning to the camper with a smile, I proclaimed, “This gadget is actually bloody brilliant.” Eventually, with experience, my family agreed. 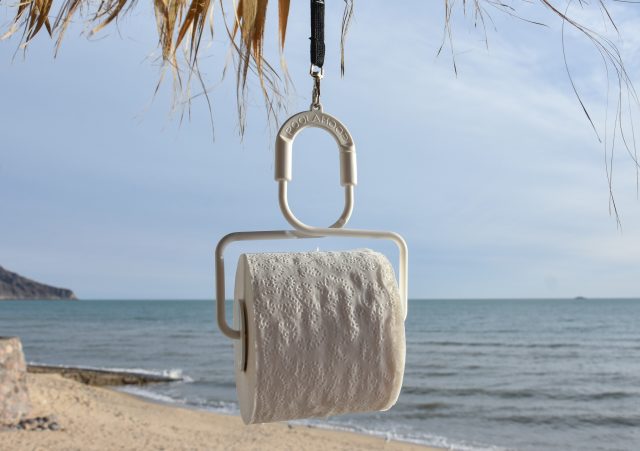 Over the next few months, the Poolahoop proved its value, swinging gaily, an oscillating pendulum across my chest as I sauntered to numero dos in a campsite, state park, dug pit, outhouse, or long drop. The construction is excellent, there is no need to carry spare parts, there are no moving parts, the lanyard is adjustable, it is lightweight, functional, and the mechanics spot on. The contraption now hangs permanently from the camper ceiling, ready to serve. Is it dignified, sauntering about with a TP necklace? No. Will Billy Eilish wear one to her next concert? I doubt it. But, who needs dignity when you have humility and convenience?