Perhaps one of the most luxurious gifts an overlander can receive is a (fully paid for!) apartment rental for the holidays. In December 2013, we parked our little 1990 Toyota Pickup on the curb, excitedly hauling our belongings up several sets of stairs to a cute apartment in Puerto Vallarta, Mexico. “Is it safe to park on the street?” we asked the host as we checked into our version of a five-star hotel. Running water! A kitchen! A real bed! “Yes, of course,” he replied. No matter where we were in the world, we always felt weary leaving our truck vulnerable to prying eyes. There was a security guard on duty, our host explained. Perfect!

The next day we woke up early, ate breakfast, and jumped into the truck, excited for the drive to Boca de Tomatlán—a quaint fishing village marking the start of a half-day jungle hike along the coastline. A bit fuzzy-brained and bleary-eyed, we hopped out of the truck, donned our packs, and circled to the back of the vehicle, heading toward the trailhead. All locked up and loaded, one of us happened to glance back at the truck.

Someone had smashed the glass window in the rear of our canopy topper, prying open one of the locks, and grabbing a blue Rubbermaid container that housed a complete set of pots, pans, and dinnerware. Our 20-liter water jug had also miraculously disappeared. Saying adiós to our hiking plans, we spent the rest of the day driving to various repair shops in Puerto Vallarta. Finally, our Toyota emerged from a glass repair shop sporting a fancy-dancy steel rear-end. Due to a slight language barrier, the canopy panel was painted a hilarious red colour to “match” the truck, but at least it was now bandit-proof. 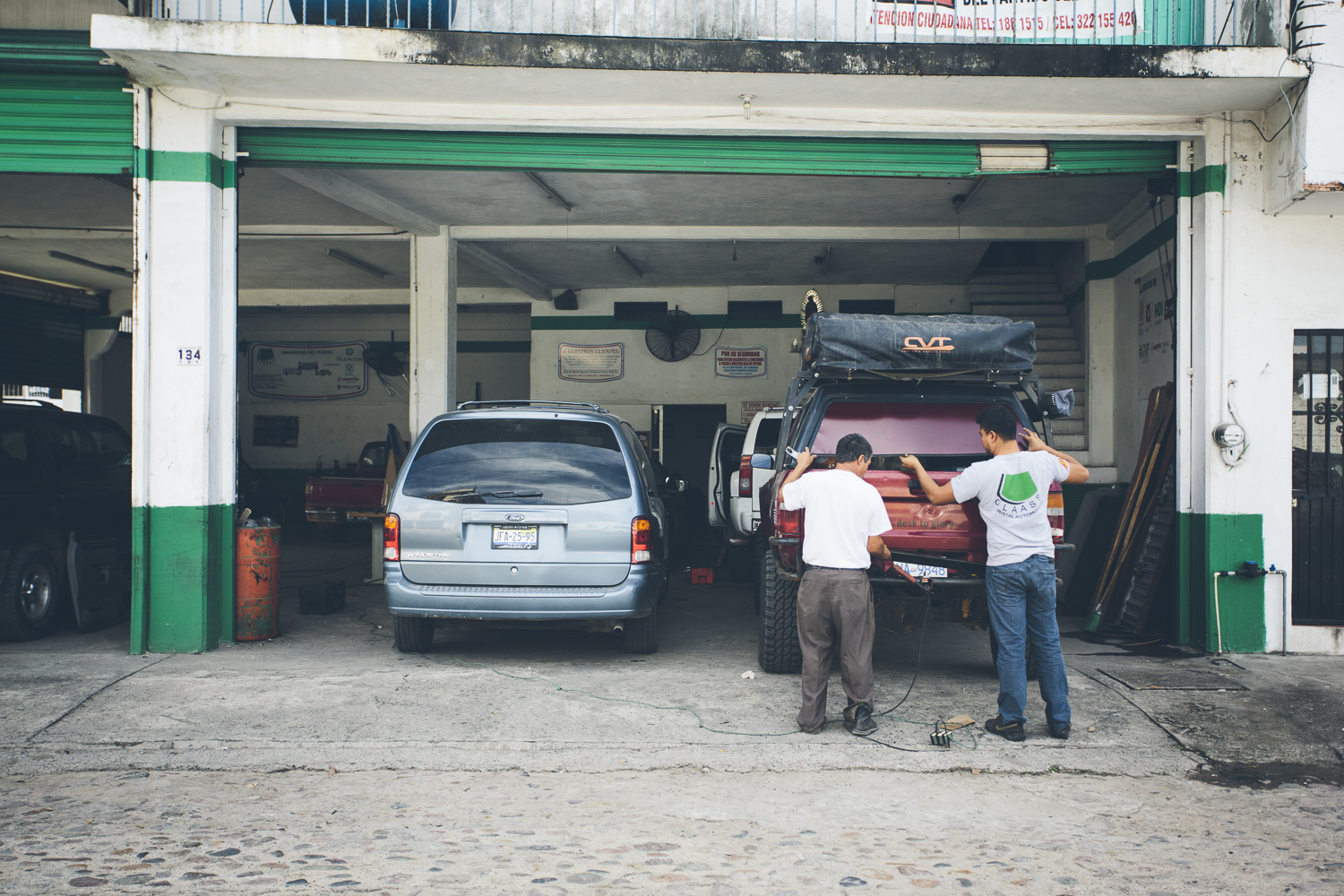 The next evening, we were surprised by a knock at the door. It was the night watchman, grinning widely as he rattled off a string of Spanish something to the effect of “Follow me!” To be honest, we were wondering where this guy was the night before when our truck was broken into. Nonetheless, Richard followed him away from the apartment up a dark main road. Richard told me later that he started to get nervous at around the half-a-kilometer mark. Without any cash or a cell phone or any clue as to where he was going, he blindly followed this stranger into the night. Two men emerged from the darkness and joined them. “Where are we going?” Richard asked, moving nervously to the rear of the group. The night watchman pointed to a hotel up the road.

Arriving at a nondescript side entrance, the night watchman knocked on the door. A set of eyes peered out, surveying the situation before closing the door again. Suddenly, our blue Rubbermaid container and 20-liter Scepter water jug emerged from the hotel entrance. What the hell was going on?

It turns out that our night manager had the previous evening off. Two other security guards were patrolling the area and spotted a couple of individuals poking around the lineup of vehicles in front of our apartment, whistling to each other to communicate. The security guards heard the smashing of broken glass, ran out to look, and saw the thieves slinking off with our stuff. Running after the robbers, the guards grabbed our Tupperware bin and water jug, storing them overnight at the hotel as they didn’t know who the red Pickup truck belonged to. The guards explained the whole story to our night manager the next day. That was why he was so excited when he arrived at our doorstep, urging Richard to follow him into the night. Later, we dropped off a large box filled with bottles of cervezas at the hotel to express our gratitude.

Each time we tell this story, our cold human hearts grow many sizes larger, softening at the kindness elicited by a group of strangers on a dark winter’s night. While it truly felt like a Christmas miracle, we know that acts of goodness and light take place every day around the globe. This one just happened to take place in Puerto Vallarta, Mexico.

Got a Humanity story? Expedition Portal is looking for people-helping-people stories: feel-good tales that start out not so great yet end on a happy note when travelers are helped on the road. If you have or know of a compelling Humanity story, send your ideas to https://overlandjournal.com/write-for-us/

Article length is 500-750 words, and excellent photography is a must. We look forward to hearing from you!

Want to read more from our Humanity collection? Check out From Russia With Love by Motorcycle Senior Editor Heather Lea.