Inside the world’s largest country, you’ll find elderly ladies baking bread in wooden houses with painted window frames; large, prosperous cities and honking horns; children riding bicycles on gravel roads, and some of the most industrious, approachable people on the planet. 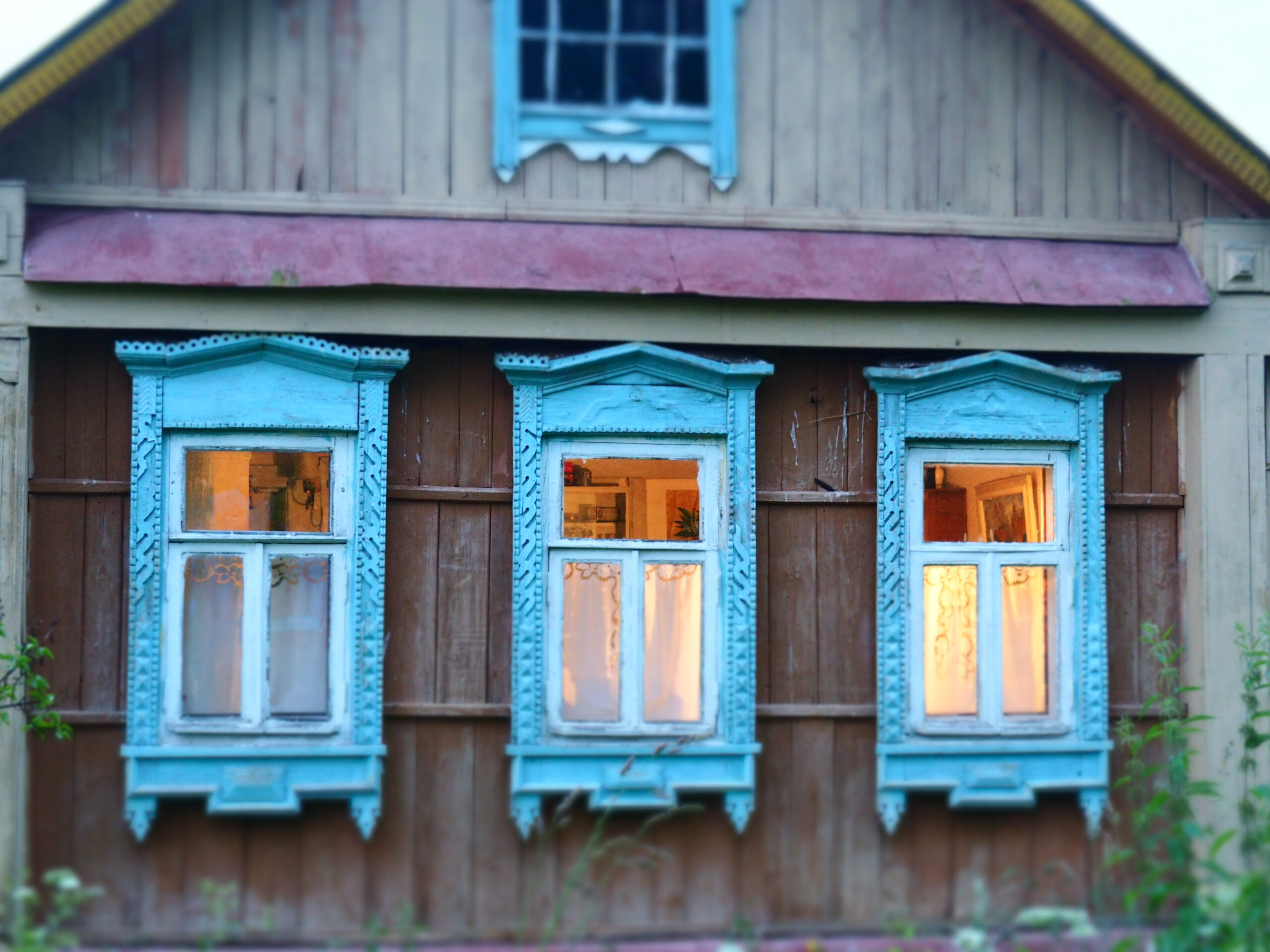 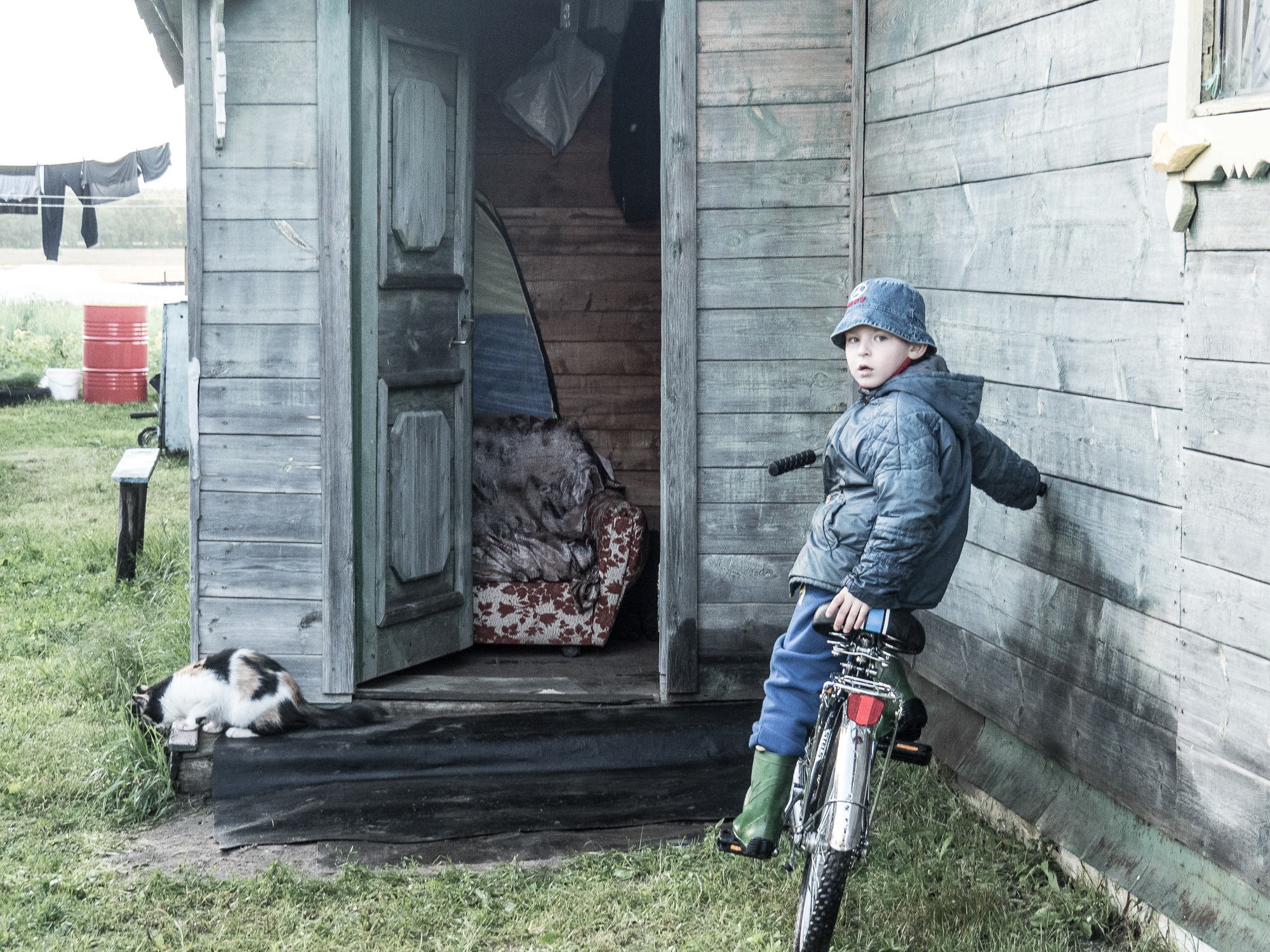 Russia scares many travelers. Bad things happen there, just like bad things happen in your own country, where you may feel safe and sheltered. Perhaps it’s Russia’s mystery and intrigue—its seemingly inhospitable line in the sand—that puts people off. Or the fact that it’s so difficult to visit the country, or to stay long once you’ve arrived. 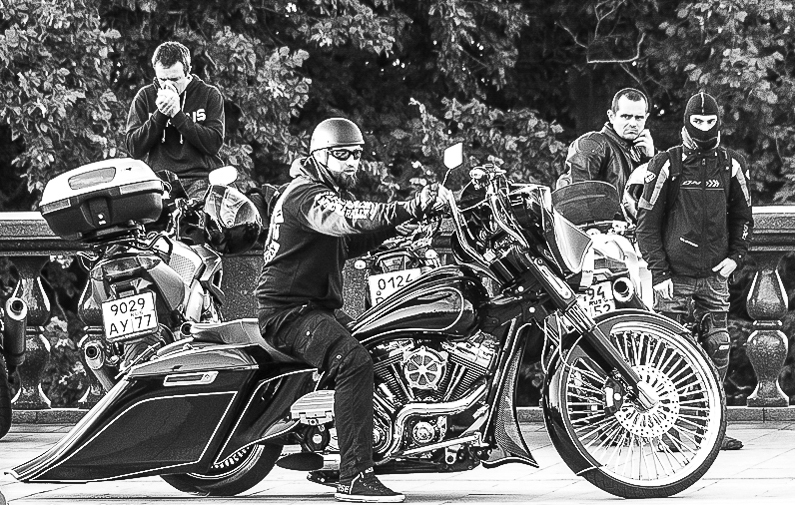 Don’t let the tough demeanor fool you; Russians can be the friendliest people on the planet.

But Russians are nothing if not friendly, resourceful, and accommodating.

I roll my broken and battered F 800 GS into the non-touristy city of Yakutsk—a place with few hotels. Travelers rarely venture this far, preferring to stick near the modern western cities. The only accommodation here is for truckers and those who must be there for work or family. We are 5,095 miles east of Moscow. After an accident on a gravel road busted my brake reservoir, rendering my front brakes useless, Dave and I need accommodation and parts—both of which are hard to come by. 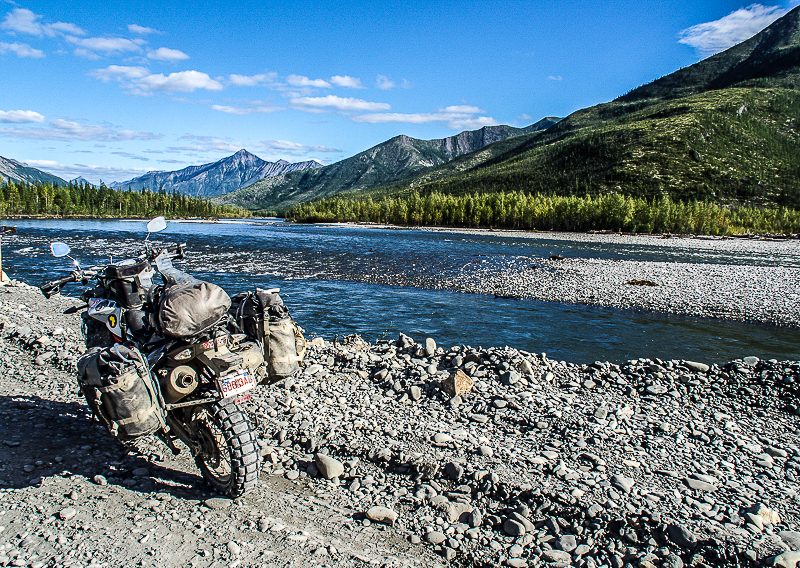 Gravel roads in Russia can be rough at times.

Before leaving Moscow, our friend Al had acquainted us with members of Russia’s notorious biker gang, the Night Wolves. Though it felt risky at first, I soon relaxed. If we got into any trouble, these were the folks we wanted on our side. 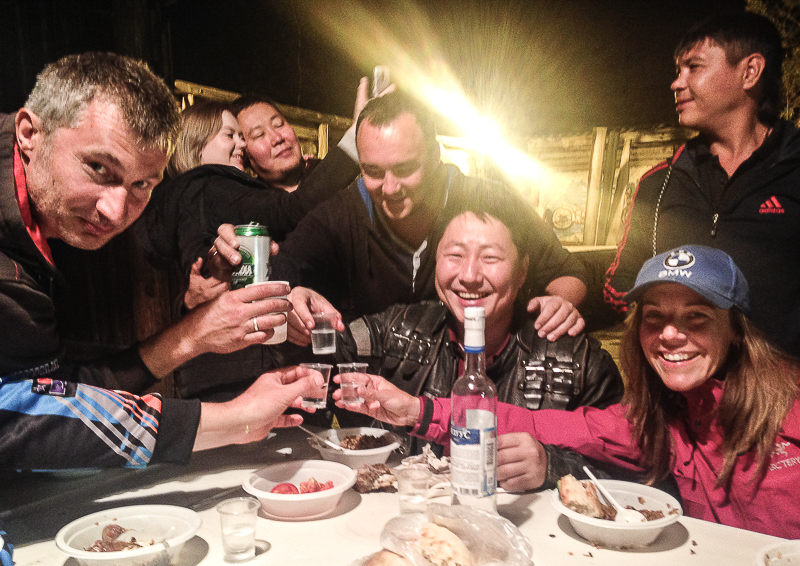 In Yakutsk, Ivan—a Night Wolves member—finds us a pleasant hotel room where we get a biker’s club discount.

The next day, another member, Victor, comes to aid us in finding parts for my bike after Ivan calls him. We don’t even need to search for someone to help us; they just show up. Victor takes two days of his time to track down the parts I need—not BMW stock, but Chinese knockoffs that will work for the time being. When it’s too hot in the hotel parking lot to work on bikes, we follow Victor to his garage—a shack down a gloomy alley secured with a padlock and wooden doors, like many garages and storage units more affluent locals can afford. 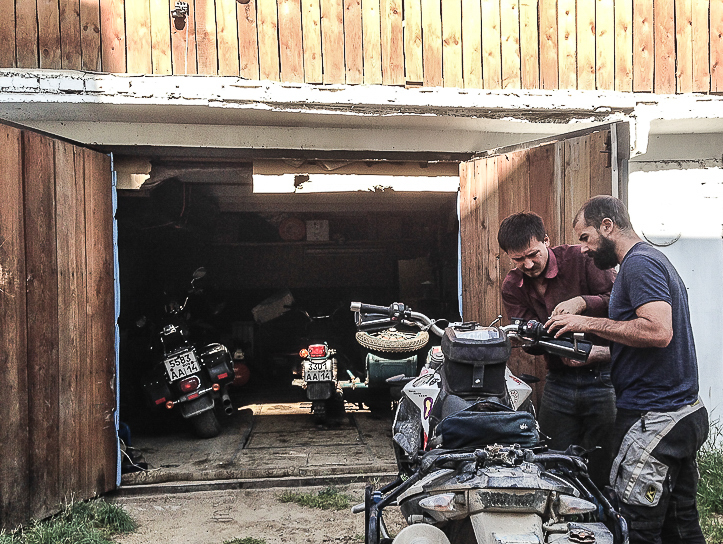 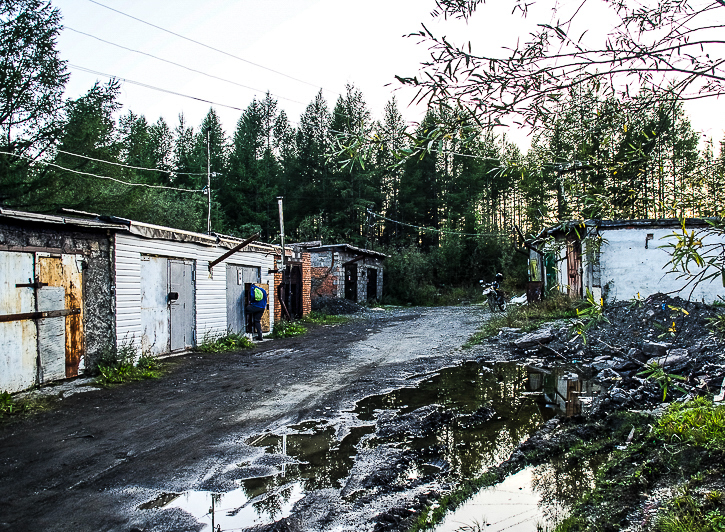 These garages are usually down sketchy looking alleyways and are what Russians use for storage or garage/workshop space.

A few days later, we’re still in Yakutsk waiting for a replacement rear shock for Dave’s bike, which is so completely trashed, he bounces down the road as though riding a pogo stick. Anatoli, another gang member, picks up where Victor left off, and we again find ourselves in a dark wooden garage, trusting Russian hospitality.

Anatoli is scarier looking than the blue-eyed, baby-faced Victor, but as soon as I set foot in his workshop, he seems to want to put me at ease while Dave works. The 50-something man bestows me with gifts, including a home-baked muffin, which he unwraps and hands to me like a flower. Ice cream follows, which I enjoy while looking at photos Anatoli shows me of his 6-year-old daughter and kind-looking wife. Anatoli speaks not a word of English, yet I feel welcome and trust him, despite the gang flags on his walls and his roguish exterior. When we leave, he gives me a souvenir I can see right now in my office—a heavy belt buckle made from solid steel with a wild etched-on skeleton. 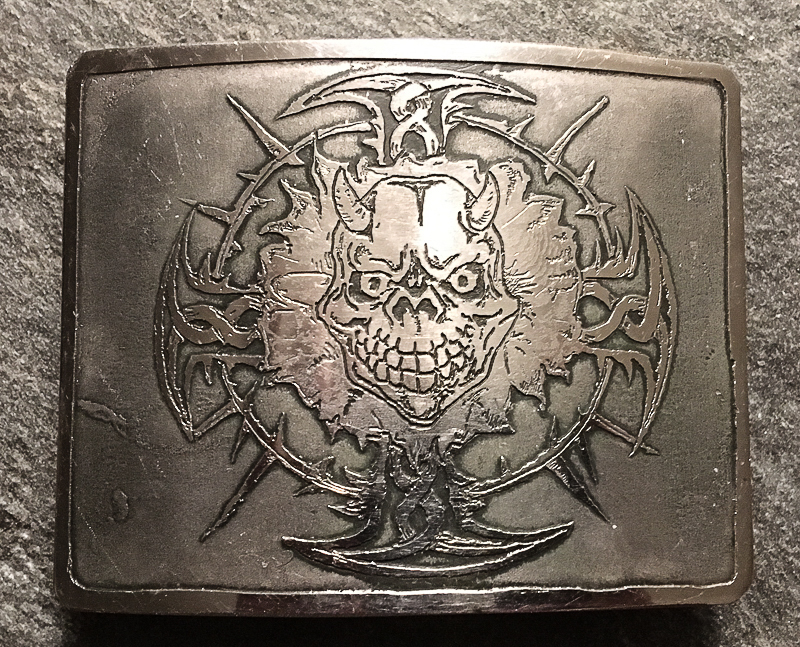 The awesome belt buckle Anatoli gave me as a gift.

Dave and I are riding the last hundred miles of our round-the-world trip and are closing in on Magadan when his rear tire blows. I’m ahead and have no idea until a car flags me down and says, “Your friend!” when we’ve stopped, then draws an arrow on his dusty passenger door. I return the way I’ve come, panic mounting with each passing mile where I don’t see my boyfriend.

I almost miss Dave. He’s standing at the rear of a tow truck, getting ready to lift his F 800 into the back. With the incredible luck we’ve come to know and appreciate while traveling the globe, the truck happened to be behind Dave when he veered to the shoulder after the blowout, trying to keep 600 pounds from crashing. Not only did the truck happen by at a most opportune time, but there is also a small crane affixed to the bed, which is the only way to get Dave’s bike hoisted and on its way to Magadan for repair. I follow them. When we arrive, the driver refuses any money from us for his time and efforts. 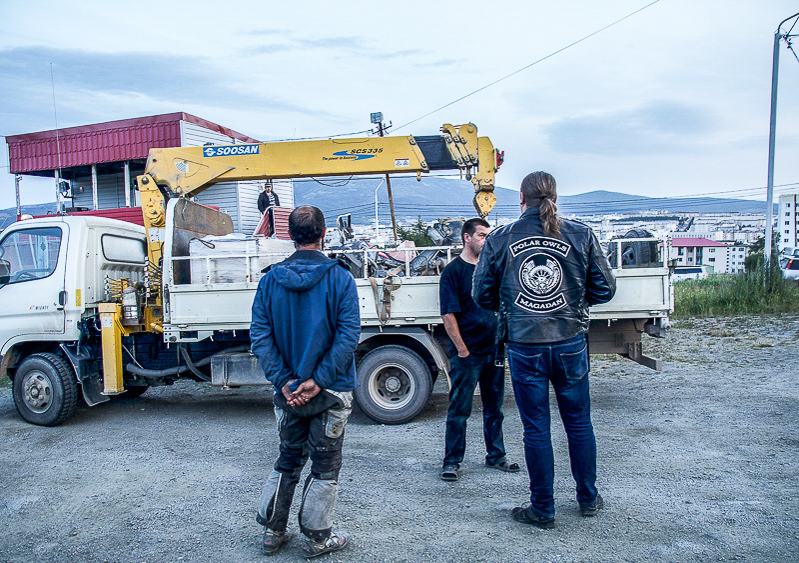 The tow truck and crane that came along at just the right time. 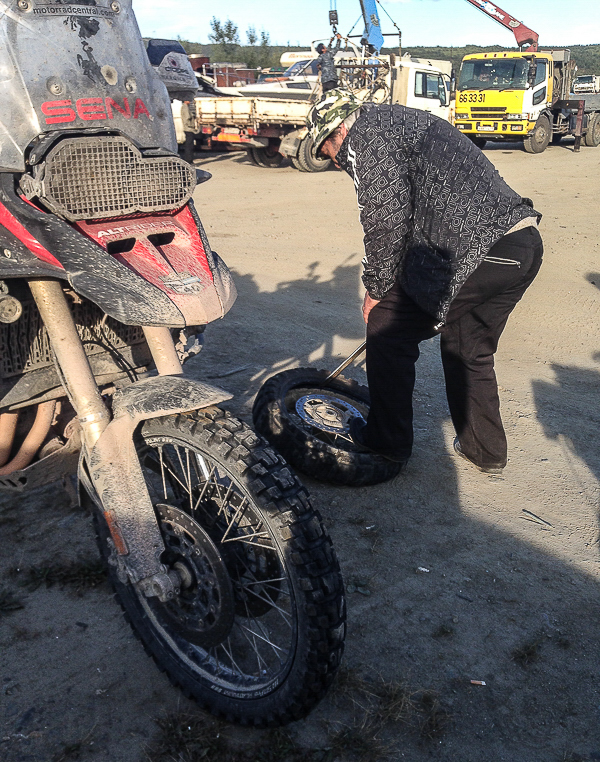 A man in the wrecking yard helps Dave replace his rear tire. 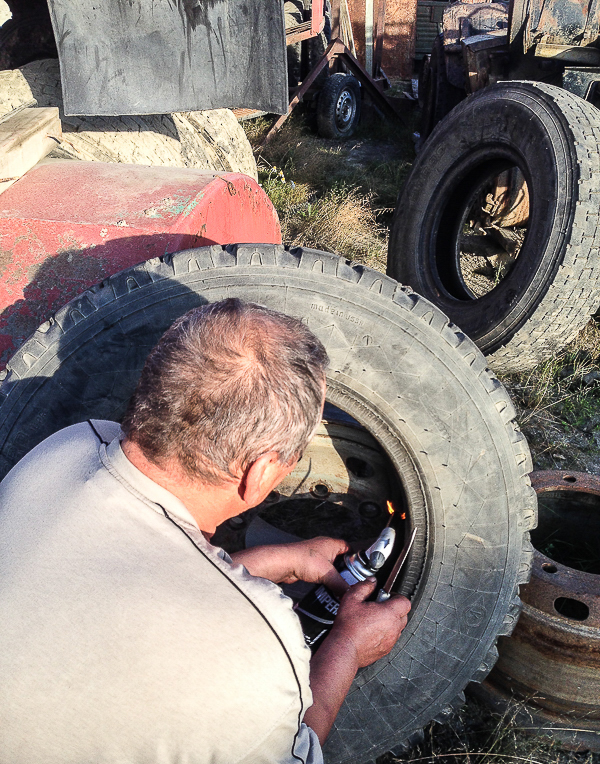 True Russian industriousness pictured here: a trucker shows us how to melt old rubber to make a new tire patch.

Whenever we needed something in Russia, the Russian’s had our backs. If they didn’t have what we needed, they set about finding it with an enthusiasm and resourcefulness that is a lost art in the world we know today.

I hope someday you feel compelled, as we were, to visit this beautiful, welcoming country. 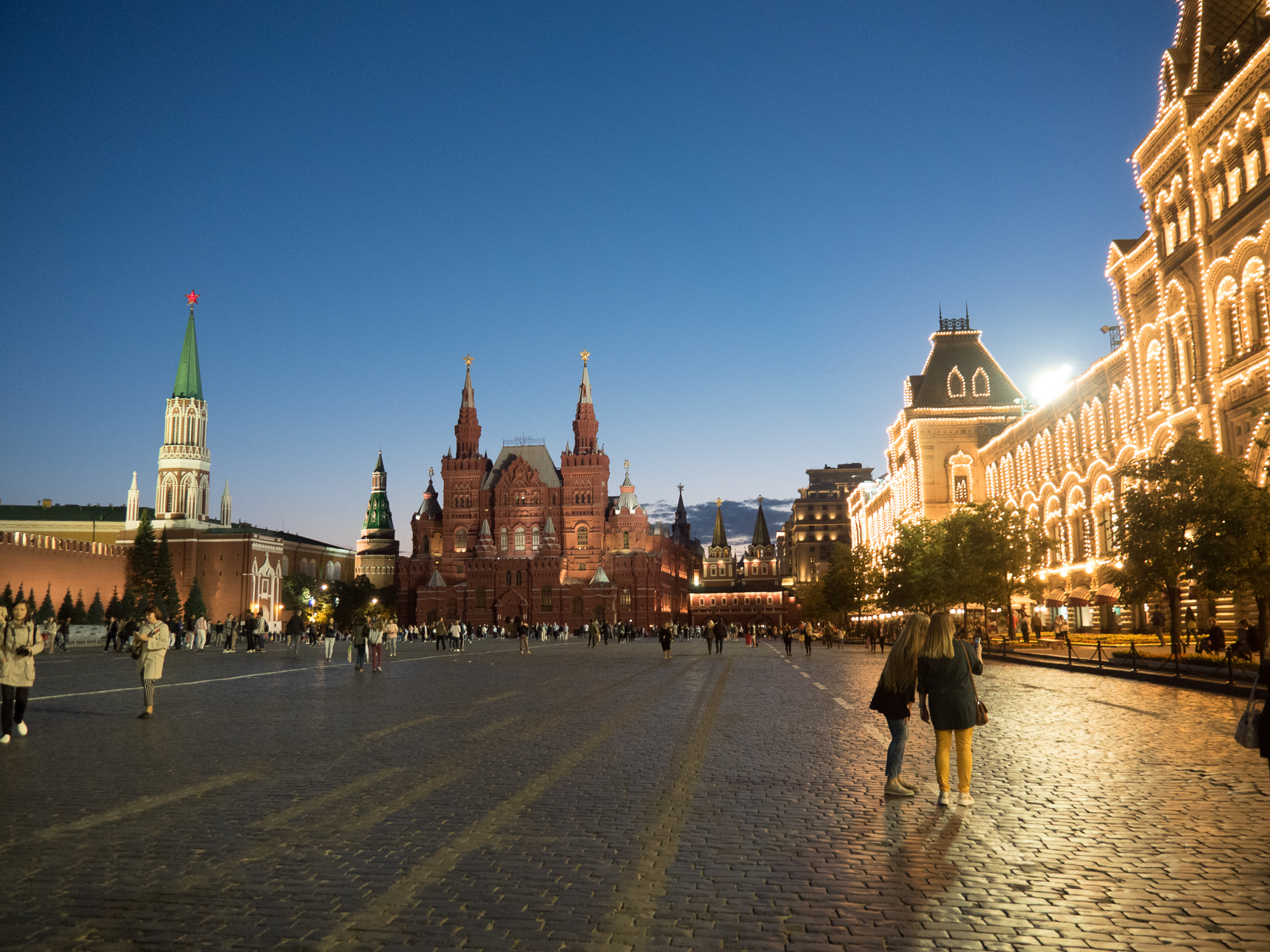 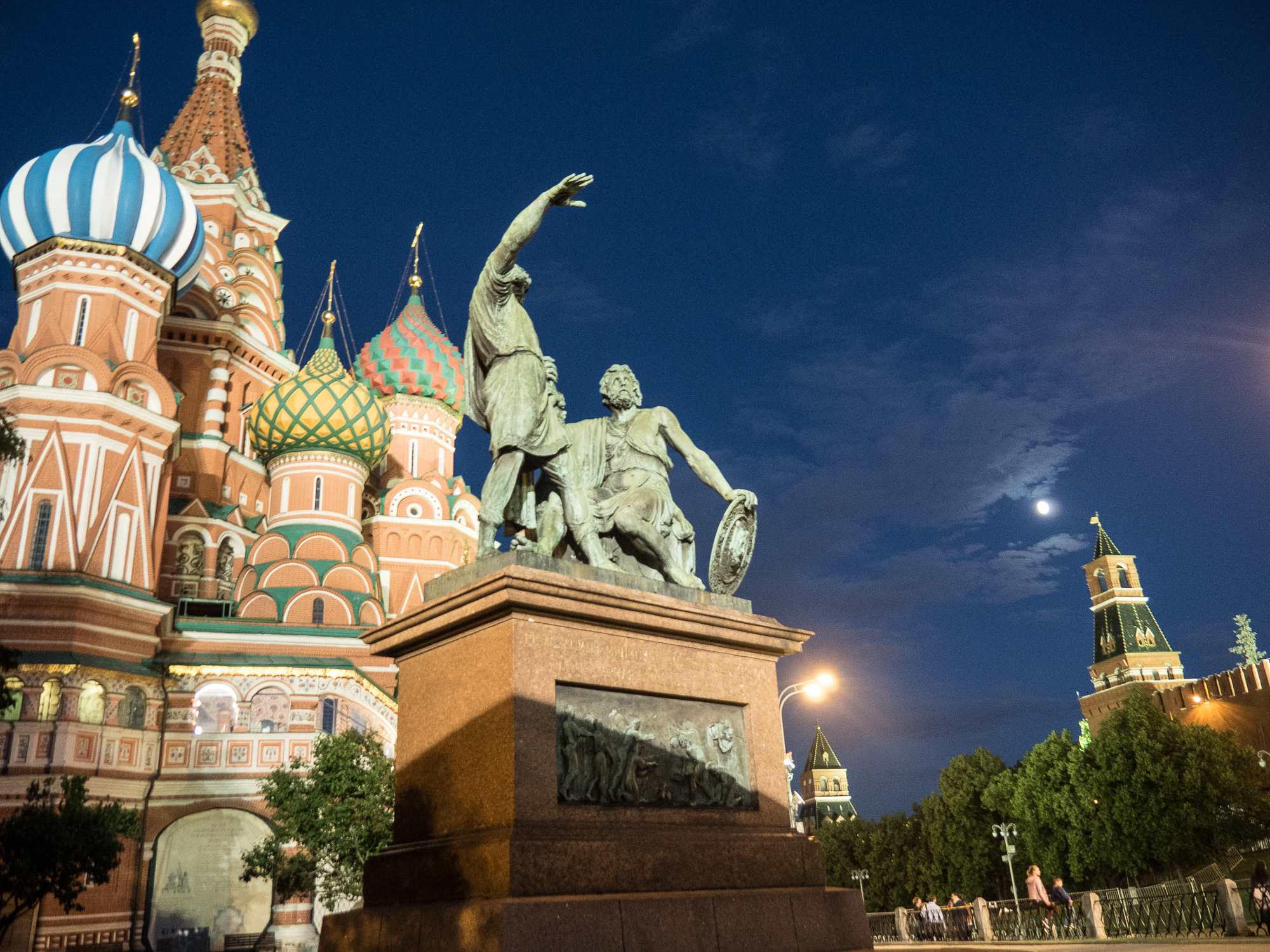 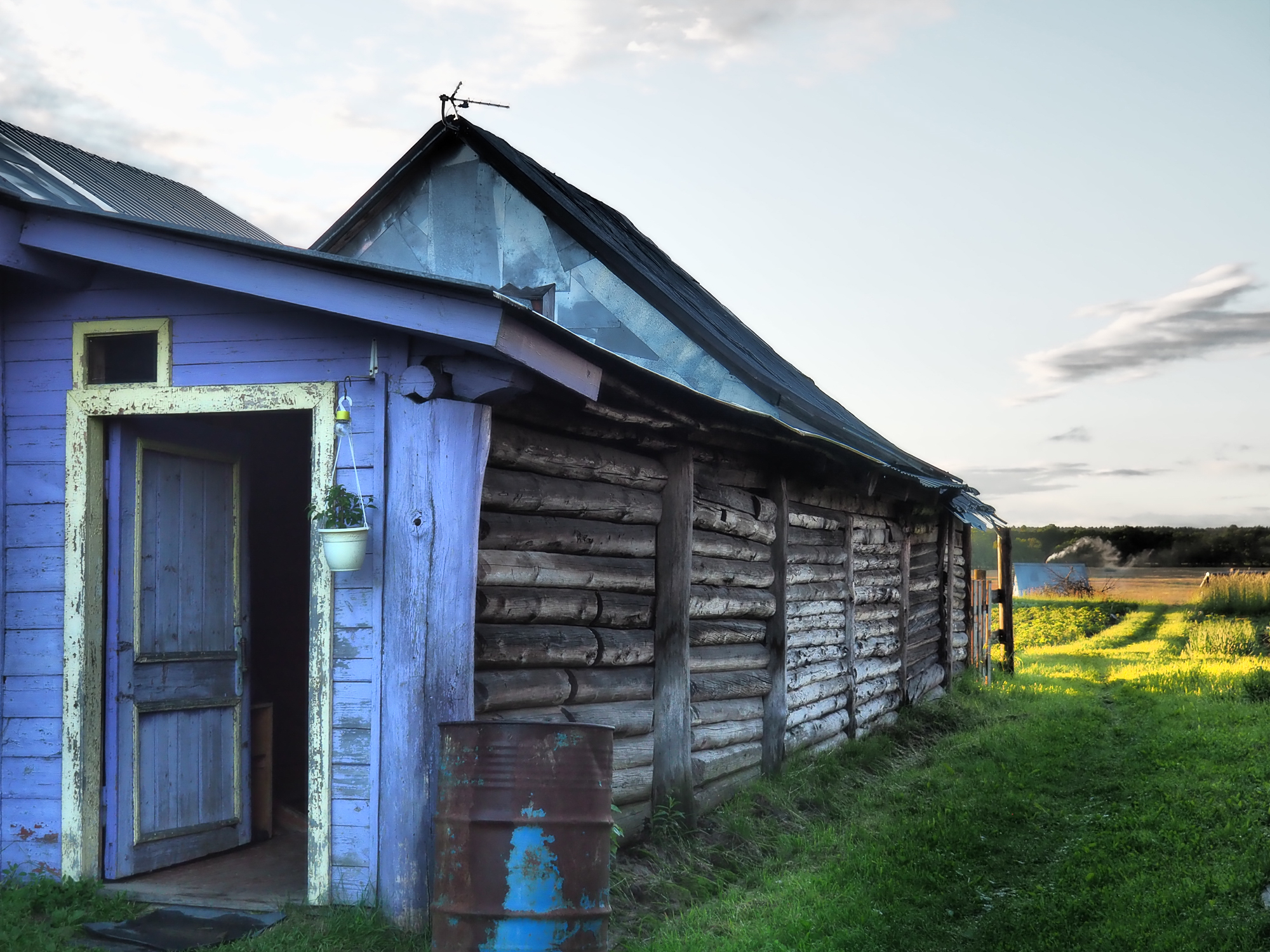