A sound made us look up from our screens.

“What’s happening? Did you turn the heater off?” Coen asked me, since I was sitting next to the control panel. 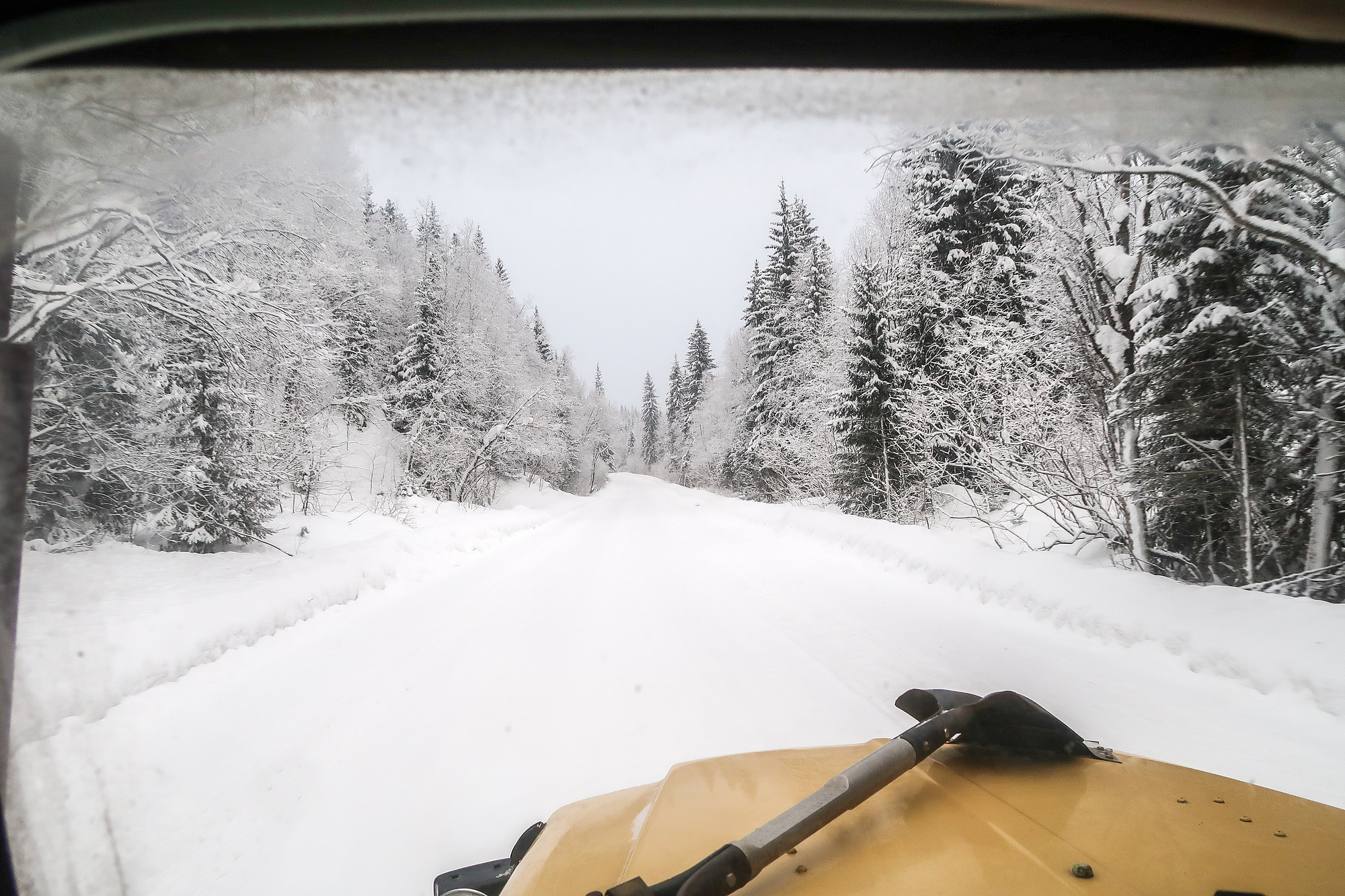 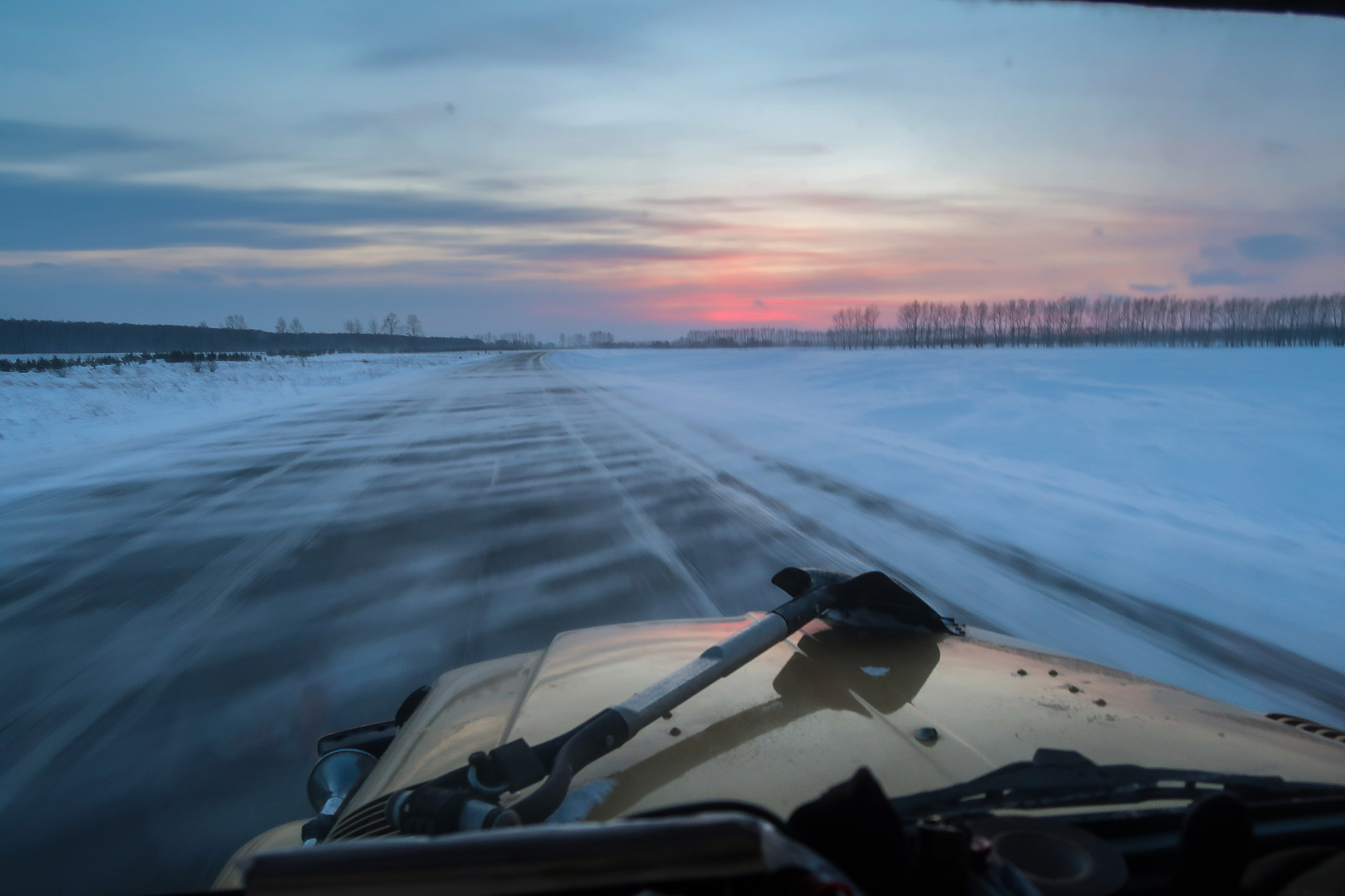 It was 11:00 p.m and we were quietly camped in a parking lot. To maximize the heat in our living compartment, we had closed the Land Cruiser’s front section off from the rear by putting blankets behind the front seats up to the ceiling. The Planar heater was blowing hot air across the floor, keeping the area cozy and warm while we were both typing away on our laptops. When the heater gave out, and the warm air stopped flowing, the temperatures dropped quickly. Outside, it was -15°C (5°F).

We couldn’t figure out why this was happening and thus settled for the best option available: going to bed and crawling deep under our down blanket topped with Big Agnes sleeping bags. (No matter how cold, we never sleep with the heater on and always leave a window open.) 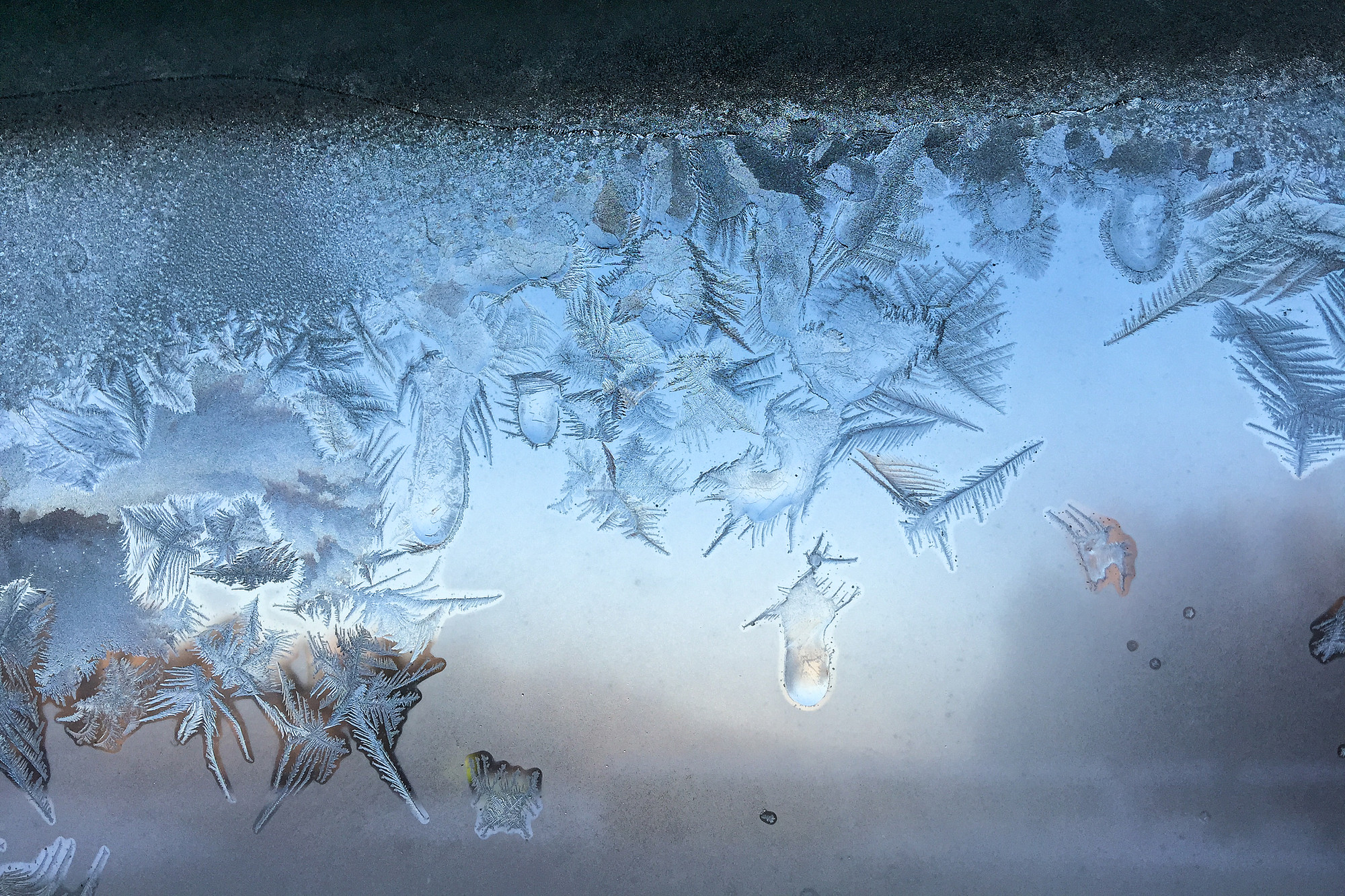 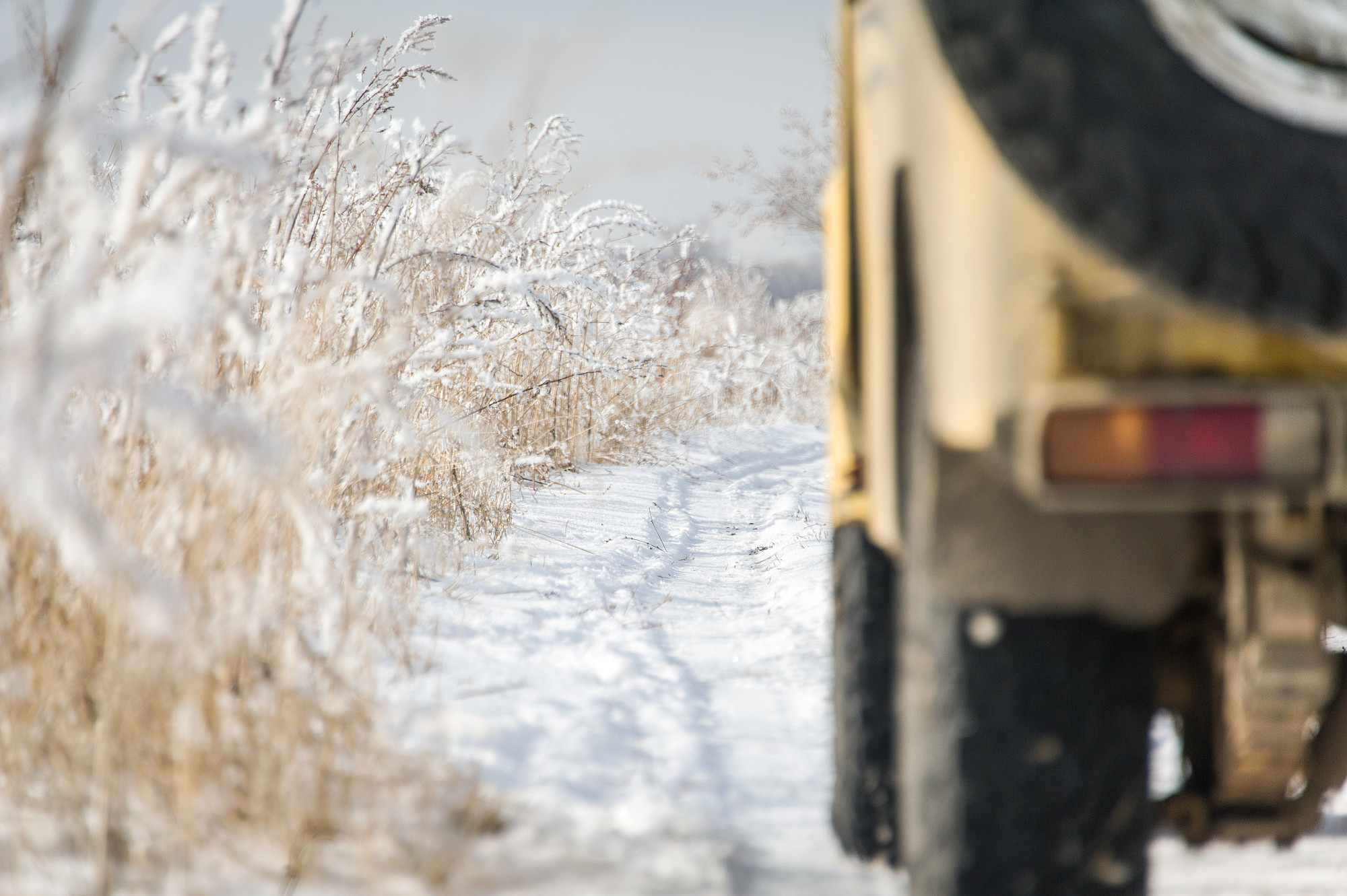 This was not our first winter overland adventure. Two years earlier we had spent seven weeks in snow**, on Japan’s northernmost island of Hokkaido. In the years prior to that, we had had a series of cold nights in the Himalayas and the Andean highlands.

Here’s what we have learned over the years to ensure a comfortable overland journey in winter.

Of course, you need winter tires, functioning glow plugs, antifreeze and a number of other measures necessary before the onset of winter. But since those are necessities whether you go on an overland trip or commute to work, I’ll leave those aside. Here, we will be talking about comfort-related issues for an overland journey that includes camping.

Thermal underwear is an essential layer to stay warm, serves perfectly as pajamas, and takes up little space in your clothes department. During winter, we basically live in our Armadillo wool undergarments. Gloves, hats, and shawls seem too obvious to mention, but I figured I’d do so anyway as we managed to start our first winter in Turkey totally unprepared—clearing your rooftop tent from a layer of snow without gloves turned out to be quite unpleasant. 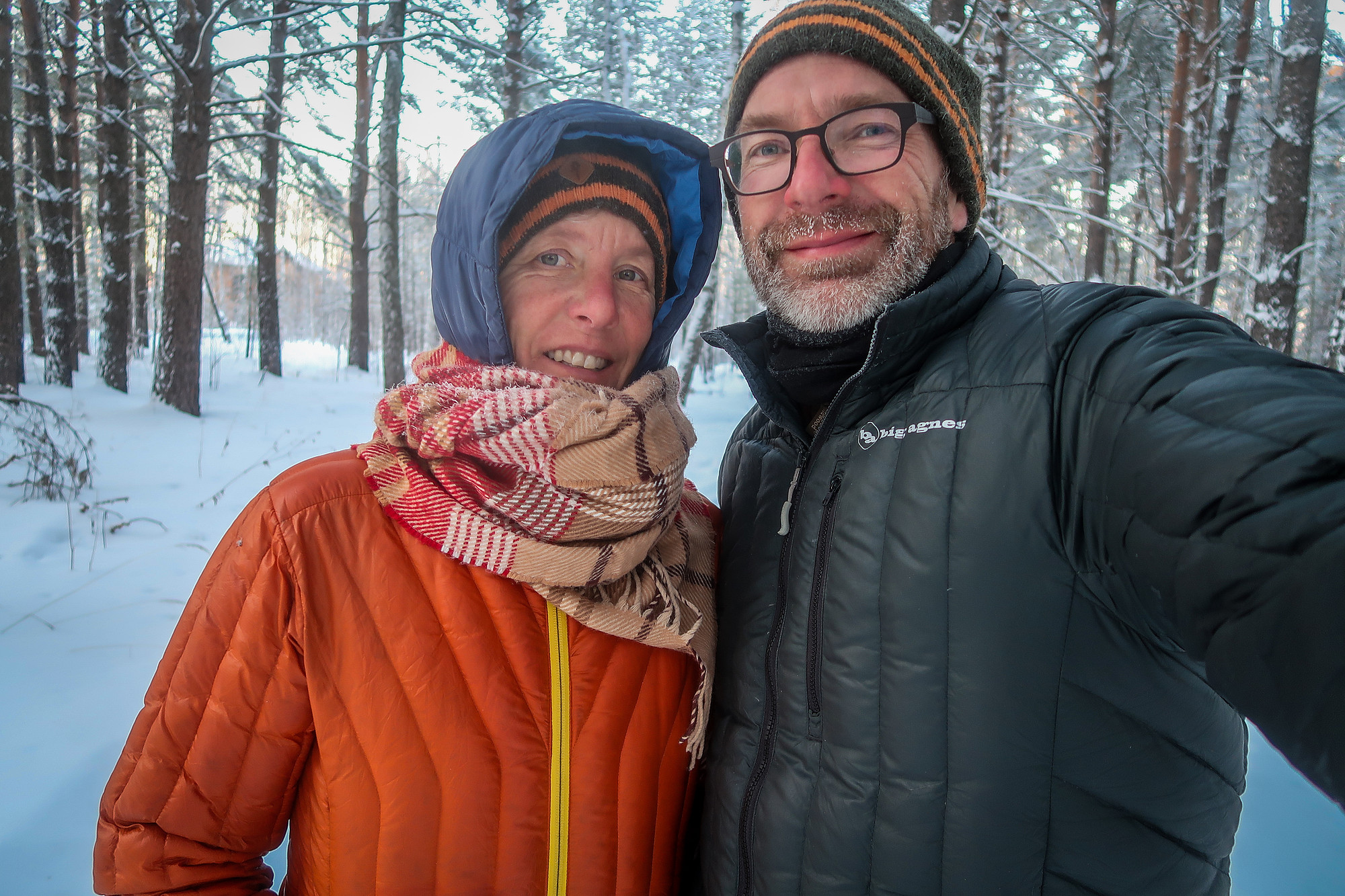 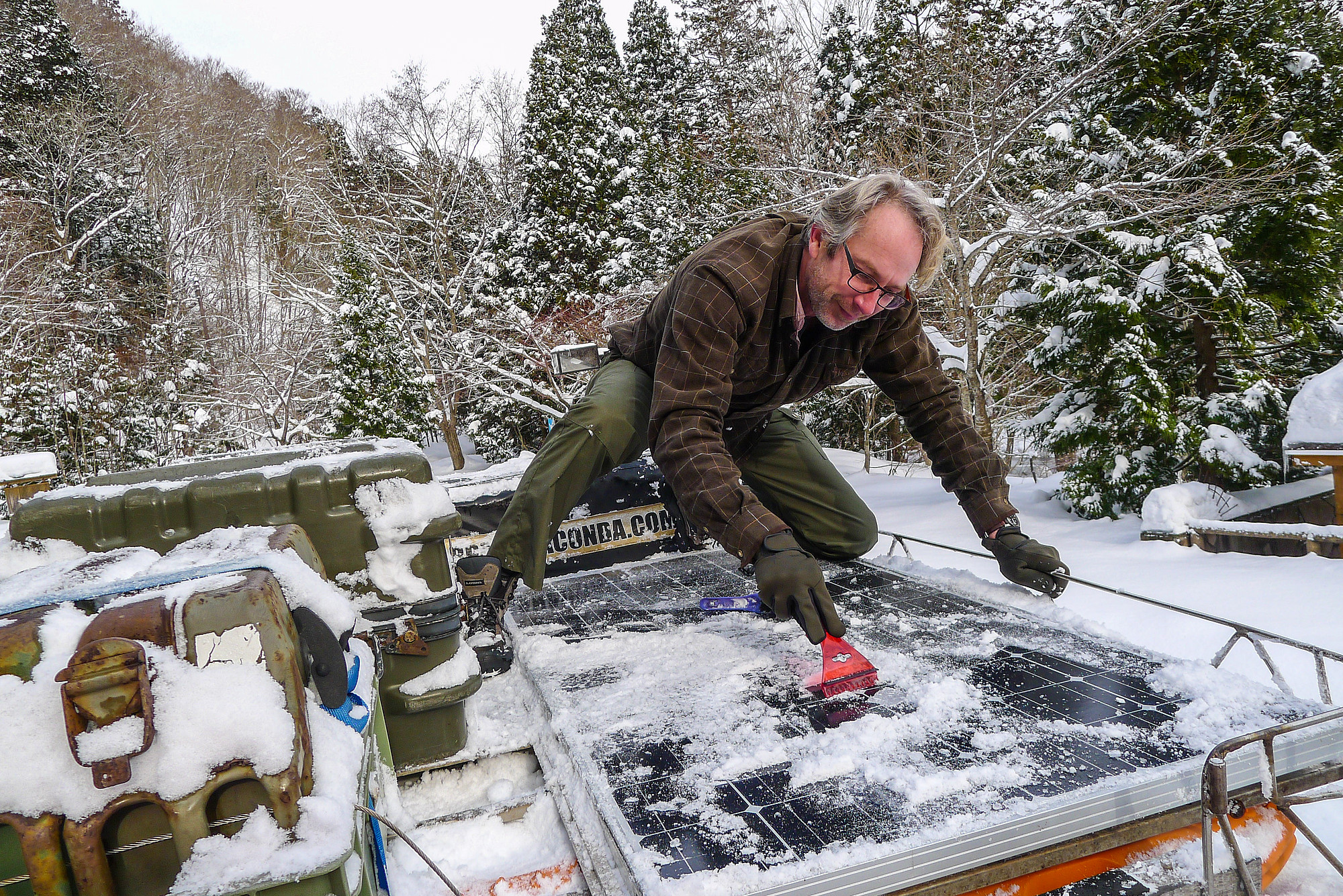 The sides and ceiling of the Land Cruiser are permanently insulated, but for the winter season, we bought additional insulation. We used large pieces to cover the floor, the lower section behind the front seats, and the rear door. Smaller pieces were fitted under the car seats and even under the floor mats. In Japan, we bought foam, while in Mongolia, we bought felt (that people use for their yurts) that worked great as well.

When parked for the night, the second the sun sets, we put foam insulation in front of the windshield and side windows. It makes a huge difference in keeping the cold out. 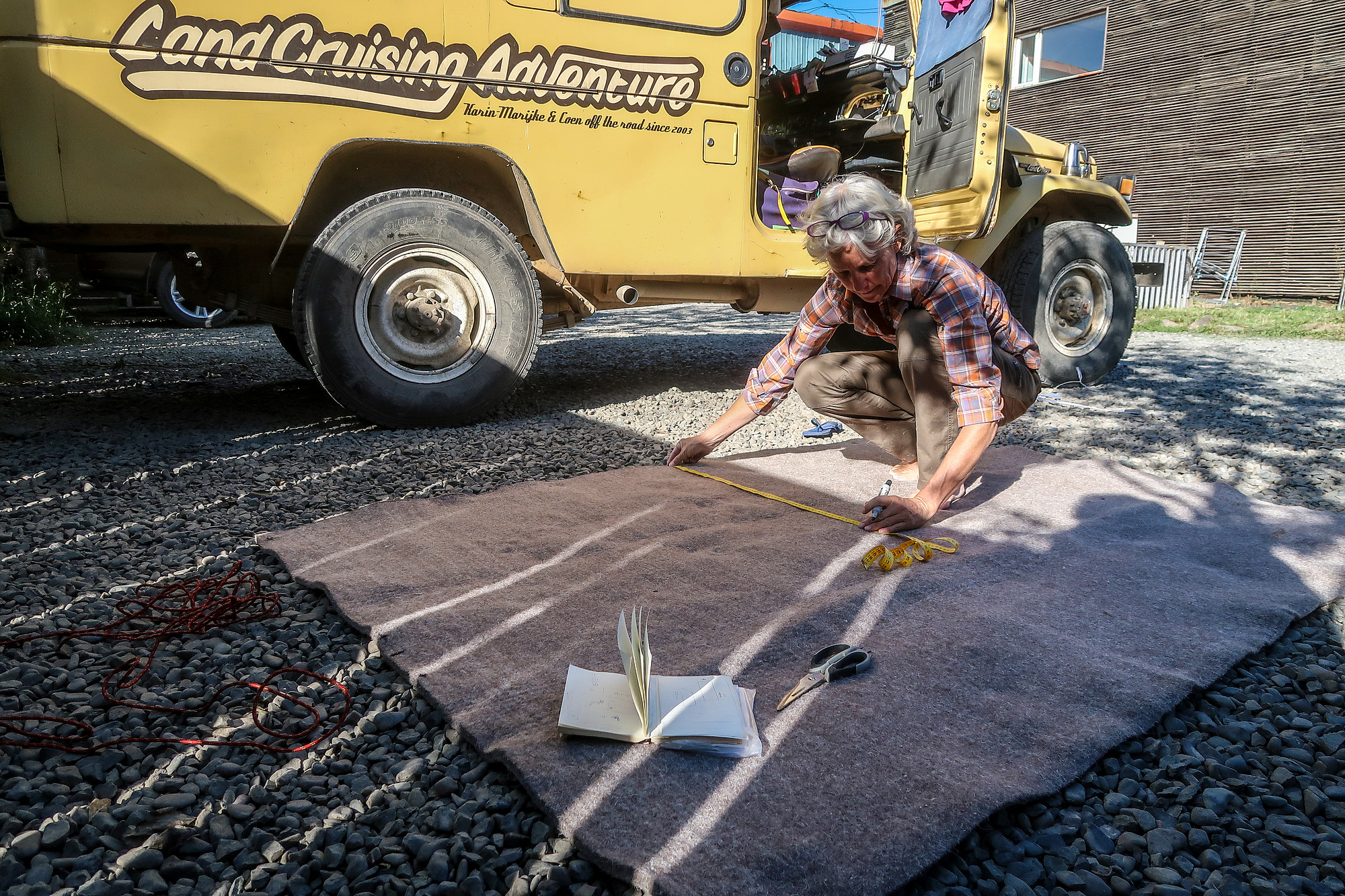 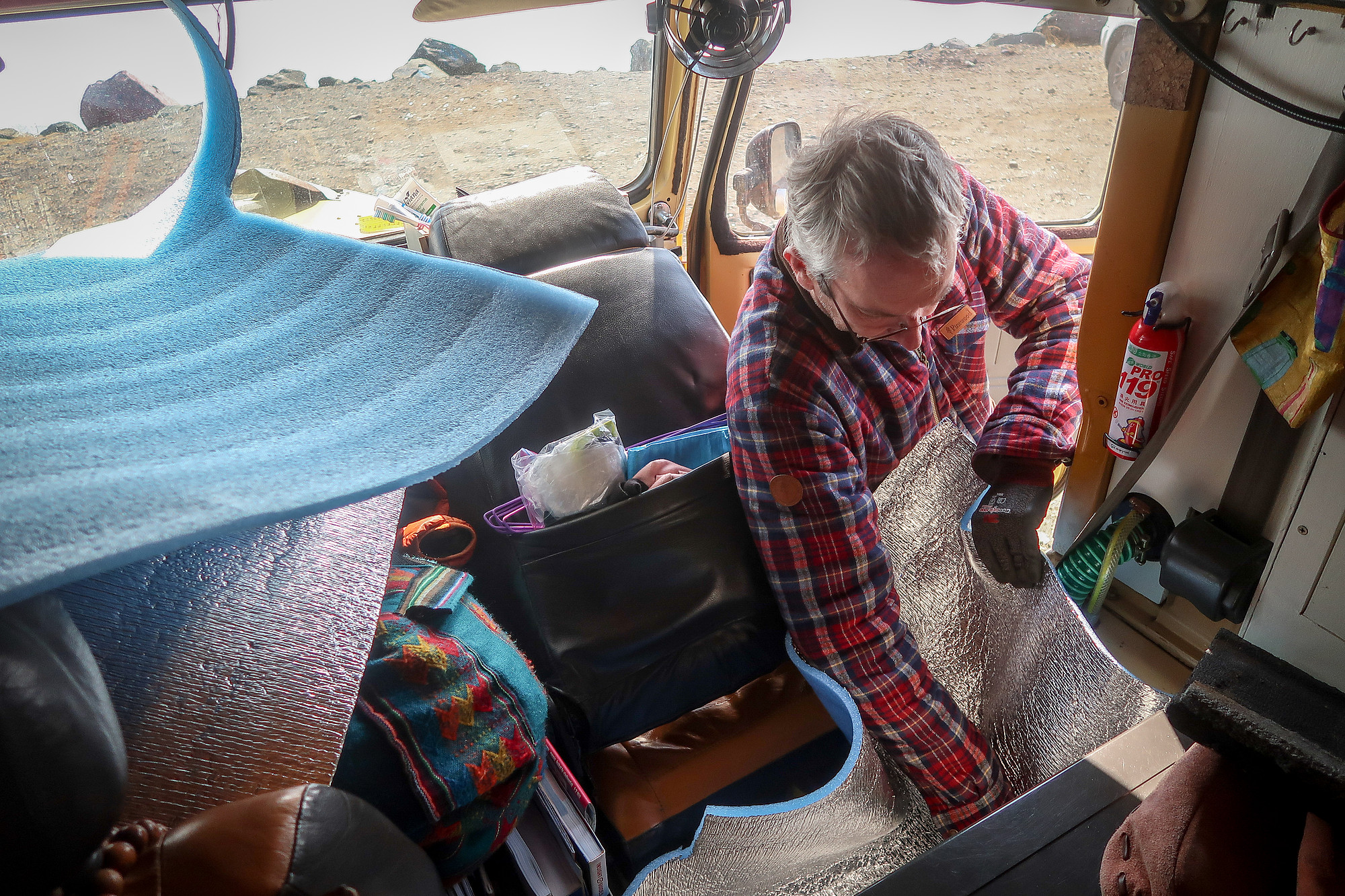 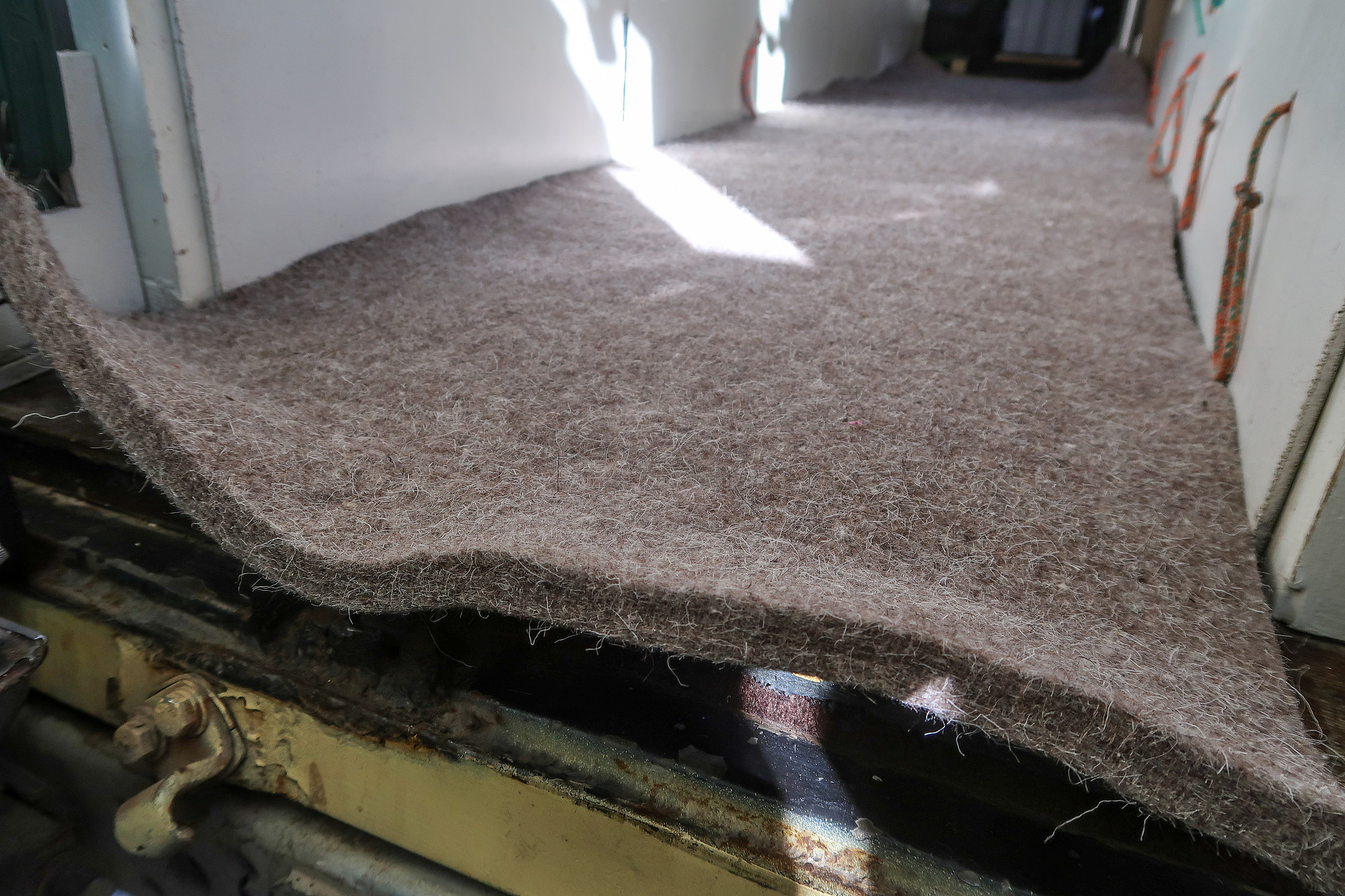 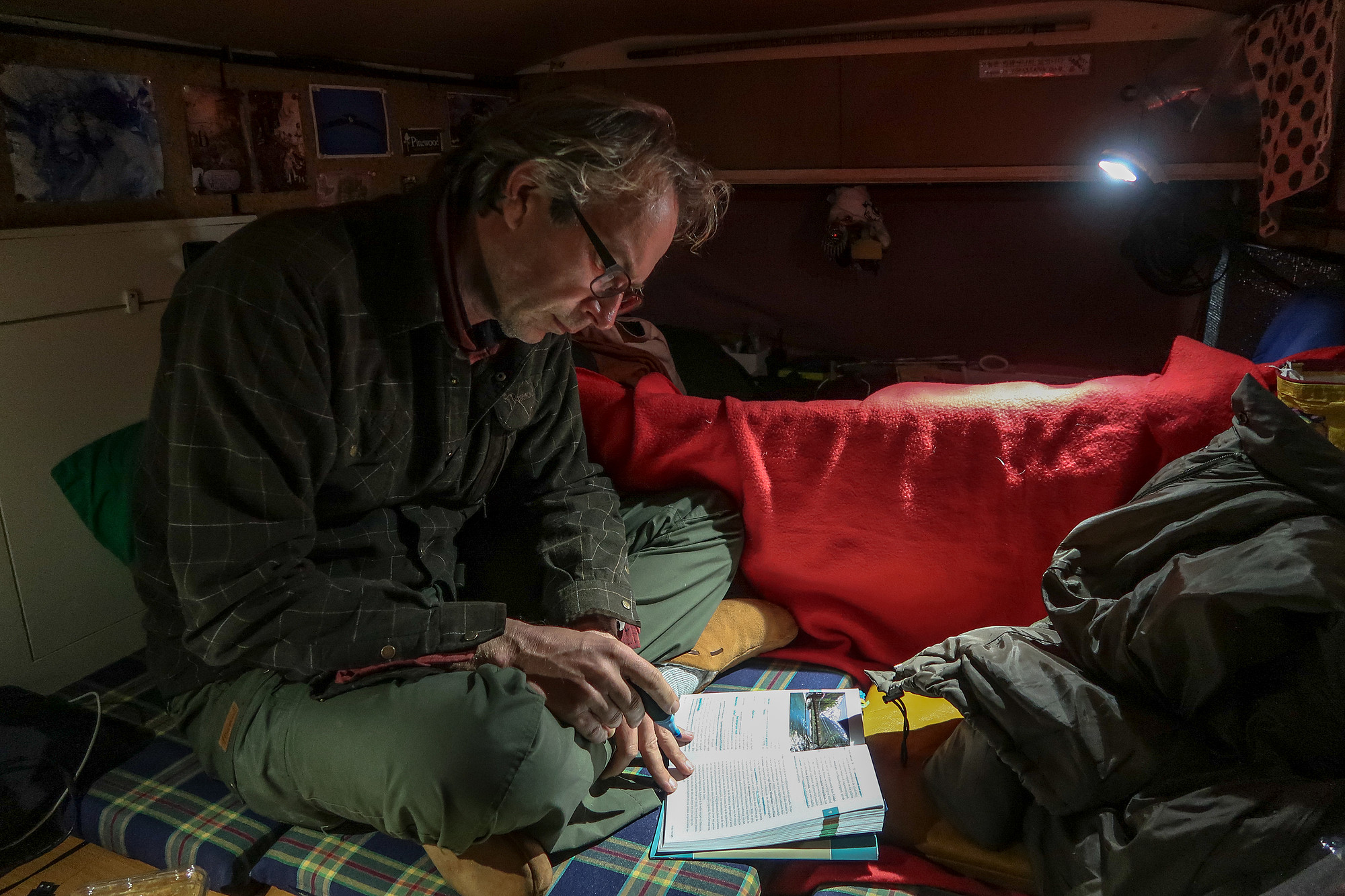 If you have an indoor water system and can keep the temperatures inside the vehicle above freezing at all times, there are no worries here. Our water tank, however, hangs under the carriage and so the system needs to be closed off before frost sets in. During the winter season, we use water canisters that we fill up whenever possible or otherwise buy 5-liter water canisters in supermarkets.

For Japan, we bought a gas heater in a hardware store that works on butane gas canisters. It gave more than enough heat for a small car like ours. If you plan on taking one long winter trip or go winter camping in the weekends, this may be a good, low-budget option. 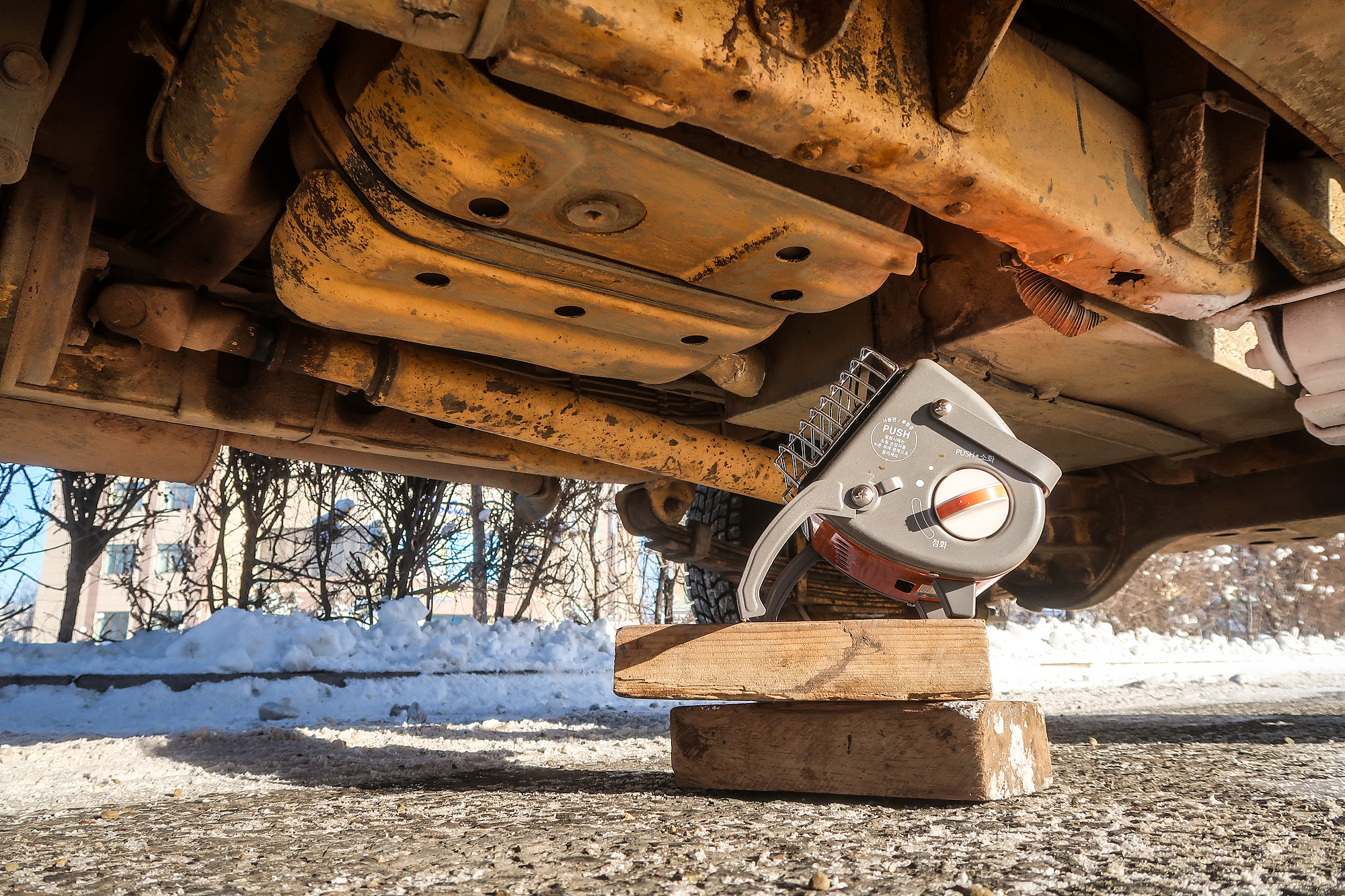 In Russia, we started with a gas heater until Tigerexped offered to send us a Planar air heater that runs on diesel, which we gratefully accepted. Initially, I didn’t see the point in switching to a diesel heater system, but now that we have used the Planar for two months, I am very glad we do have one. There are a couple of advantages in having a diesel heater:

– There is less condensation inside the car than with the gas heater.

– You don’t have the potential problem of carbon monoxide poisoning.

– We can leave the diesel heater on while driving.

– We can schedule the Planar to start before getting up, so the car is comfortably warm when we throw off those blankets and get ready for the day, which feels like a sheer luxury.

Modern rigs may have heated seats. Forget that when buying an old vehicle. Throw a blanket on the seats or, as we did, buy sheep skins in Mongolia. This made a big difference, all the more so because our seats are covered with leather which feels cold in winter without that extra layer. Another option is to buy aftermarket 12-volt seat heaters. 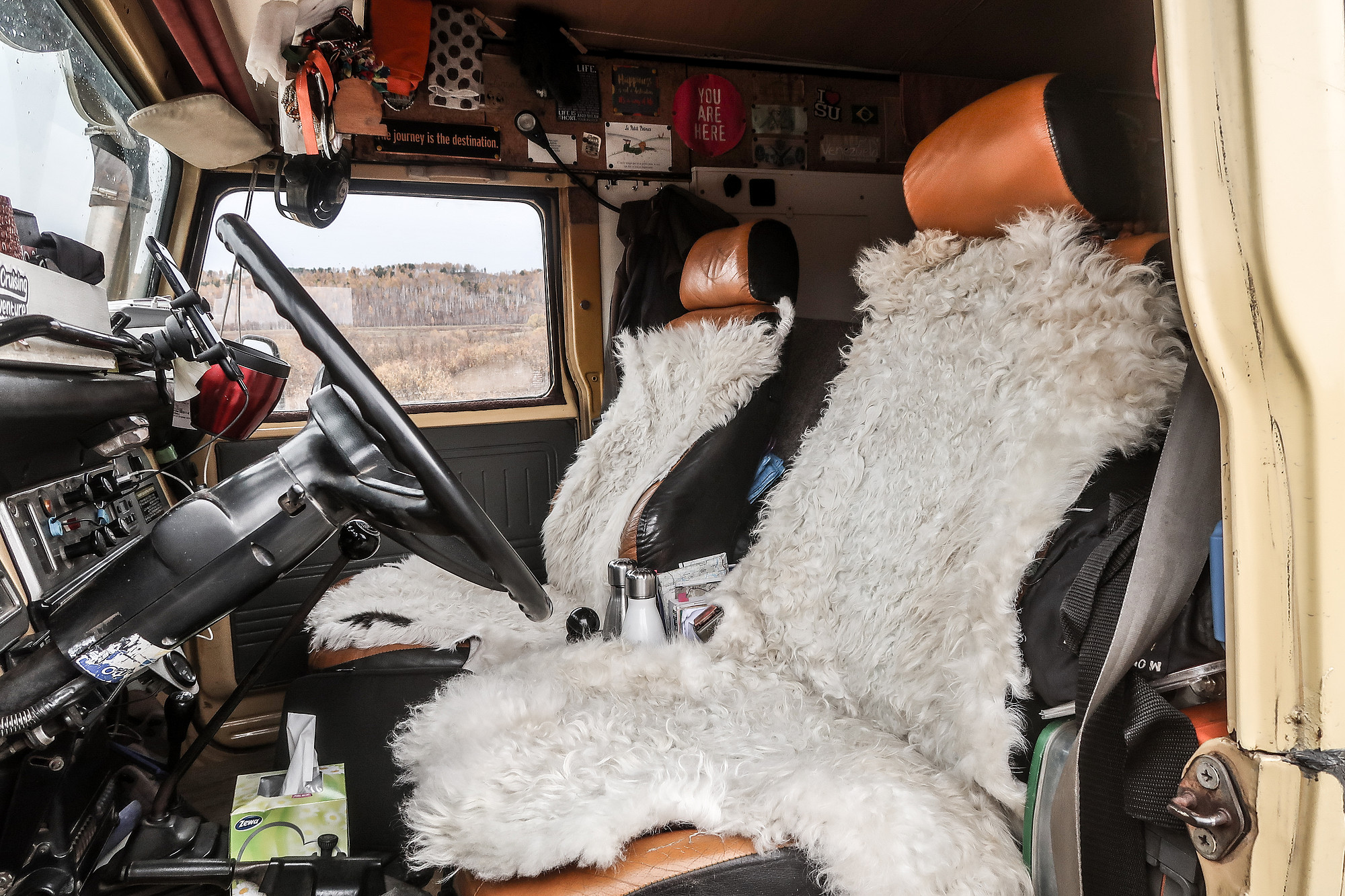 In Yakutsk, Siberia, we learned that in November locals get second windshields installed because otherwise, the driving becomes unbearable. The side windows are covered with a sheet of plastic on the inside, which we got installed as well. As the Land Cruiser has a straight window, this is simple and cheap to do. During extreme cold, such as when driving across the plains with fierce winds, these measures made a huge difference. 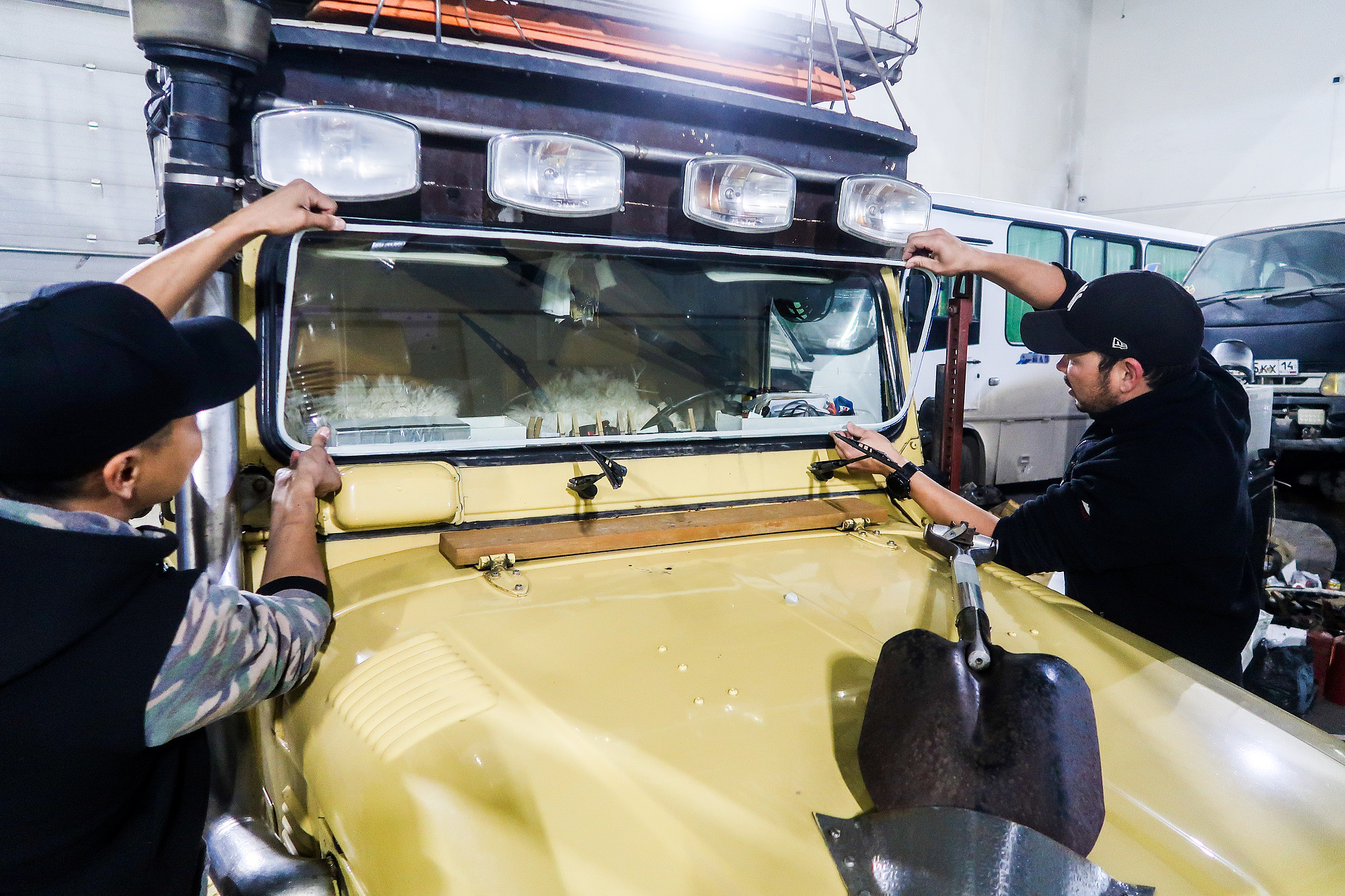 A Couple of Tips

We realize that sleeping without a heater no matter how cold and having a window open may be taking it to extremes—it’s not for everybody. Ventilation, however, is important to keep a healthy airflow going and to prevent an overkill of moisture. 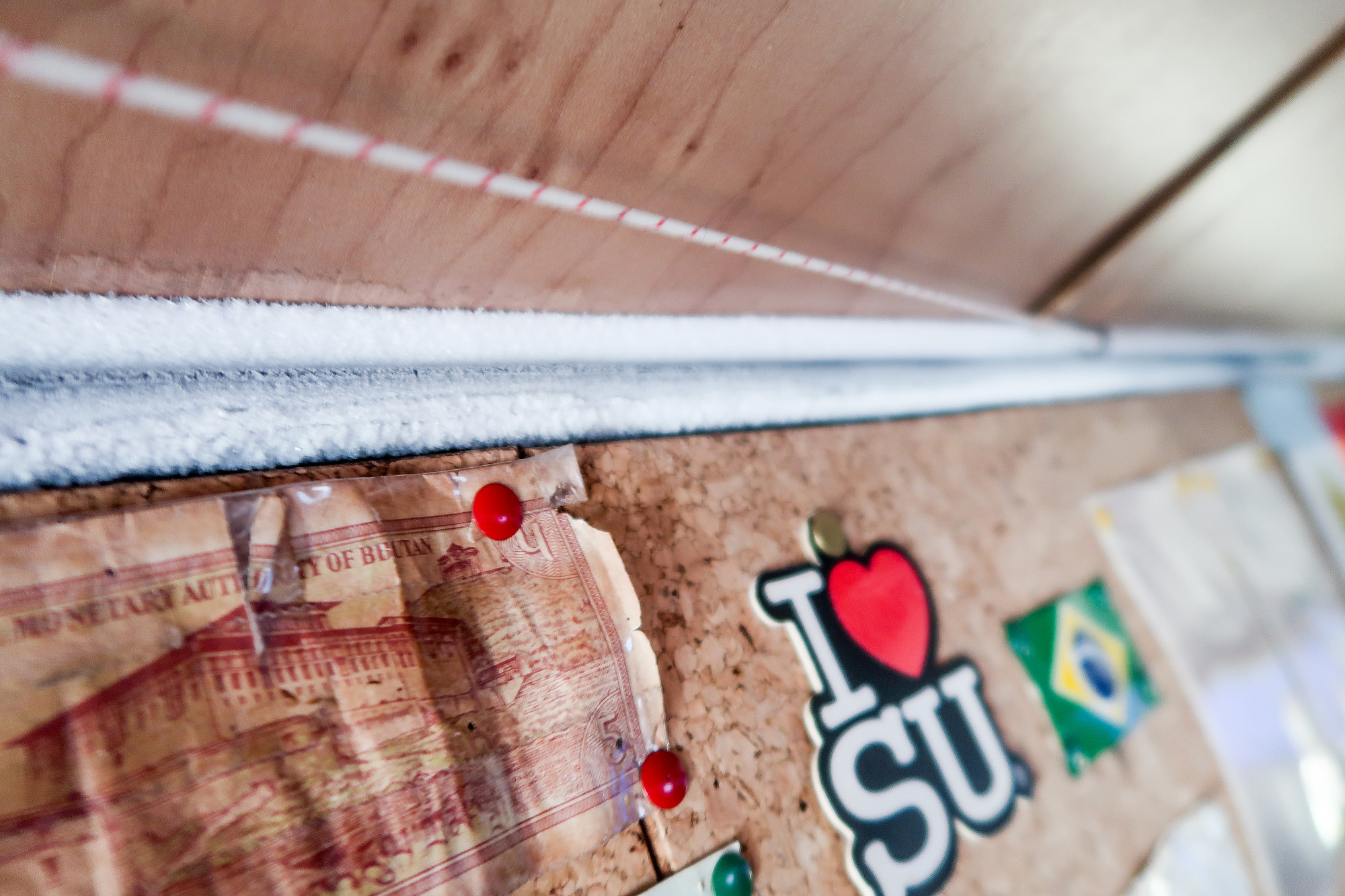 When the temps inside the vehicle go below the freezing point, fruit and vegetables deteriorate quickly. Put them in the fridge (that you don’t turn on), and you can keep them a bit longer (until it gets so cold that no matter where you put your food, it will freeze).

The frozen water in a 5-liter canister takes a long time to melt. In order to have water you can use right away in the morning, keep it in a thermos flask.

What measures you take all depend on where you go, how cold it gets there, and, of course, your required level of comfort. The shutdown of our heater taught me something important: namely, to have a back-up system in case of extreme situations. While I had originally planned to throw out the gas heater that we were no longer using, I am now going to keep it as we intend to return to Siberia for another winter adventure. 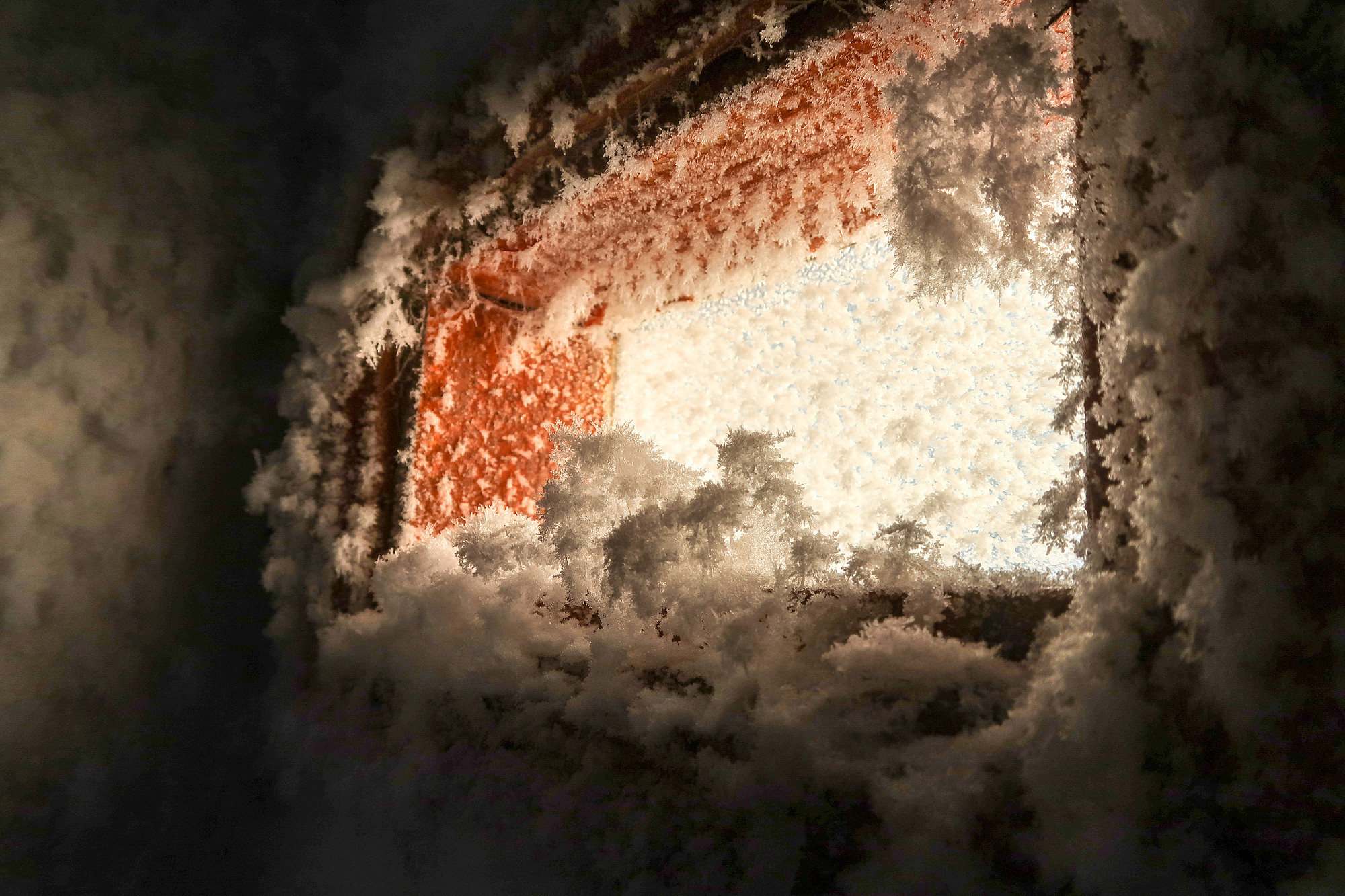 As to why that heater shut down, contrary to Russia, Kazakhstan doesn’t sell winterized diesel, and although Coen had bought anti-gel fuel additive he had misread the instructions and miscalculated by just one ‘0’. So instead of 100 milliliters, he added 10 milliliters. Unsurprisingly, the Land Cruiser didn’t start the next morning. How we got it running again is another story.

What measures do you take when going on a winter overland trip? 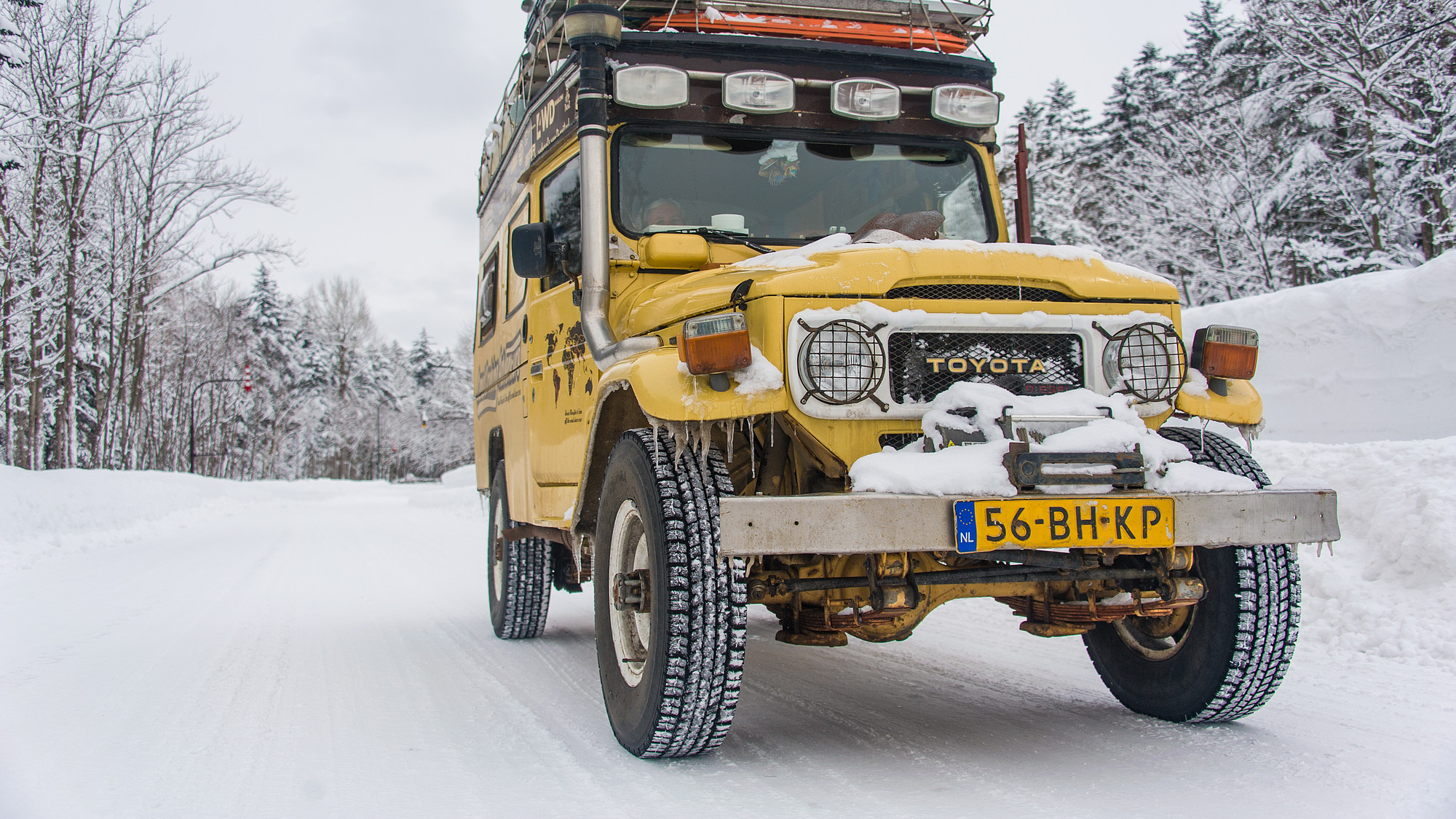