Okay, maybe “conquer “ is a little grandiose – how about “survived with honor?”

It all began after returning from my second year of racing the NORRA Mexican 1000 rally on a vintage motorcycle when my wife said she wanted to go to the next year’s race. “To chase?” I naively asked. “To race,” she said matter-of-factly. Well, since Laura doesn’t really enjoy riding motorcycles, I suspected she meant racing something with four wheels. Being a big fan of the entire build process of any cockamamie motorsports idea, I set out to find the perfect donor vehicle. 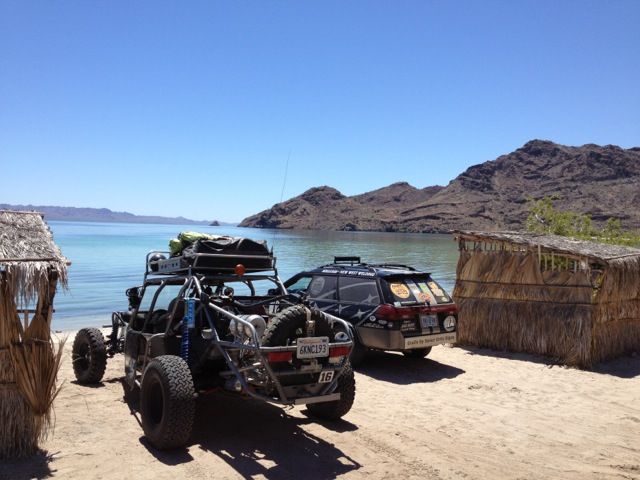 The Mexican 1000 Rally is the reincarnation of the original race that transformed into the World-famous Baja 1000. It is a race steeped in history, where actor-cum- racer James Garner went bumping steering wheel to handlebar with the likes of motorcycle legend Malcolm Smith. The “new” Mexican 1000 was deemed the the happiest race on earth by its promoters and had a focus squarely on reliving the roots of Baja racing – what’s not to love? I first showed up in 2011 on a 1972 Honda SL350 twin motorcycle, an appropriate (if not painful) choice considering the M1K’s vintage vehicle focus. The draw of the M1K for me was that it was more about fun than intense competition, and racing old and eclectic racecars and motorcycles was more than just accepted, it was encouraged (how else can you explain seeing a ’58 Edsel drifting around a corner on a washboard gravel fire road). Learn more here: https://www.norra.com/norra.php.

For my wife’s first racing experience, I decided I wanted the ride to be slightly more plush than a VW buggy or open-air Bronco. It also had to be cheap, due to that fact that my race budget is usually closely tied to our tax returns, which is to say, not enough scratch to buy a real racecar and also pay the entry fee and other expenses. The car I was driving when I met my wife was an old Subaru station wagon, and since I live in the Pacific Northwest, the Subaru capital of the universe (Colorado and Vermont notwithstanding), the choice seemed to make itself. Beside, what’s more fun than watching amateurs race 1200 miles in Baja, mostly off-road, in a pretty near-stock Subaru station wagon?

Based on my 2 previous successful M1K attempts (winning our class), I knew that the M1K was more about survival and endurance than actual speed, at least for those at our sponsorship level. We also needed to carry spare parts, tires, camping equipment, provisions and tools in the racecar, as we would be traveling in places where it could be 10-15 hours before a chase truck could come to our aid. Therefore, I always thought of the build as more expedition vehicle than rally car. After all, we would be driving over the 3-foot-tall whoops and silt beds at close to expedition speeds anyway (ie; slow). 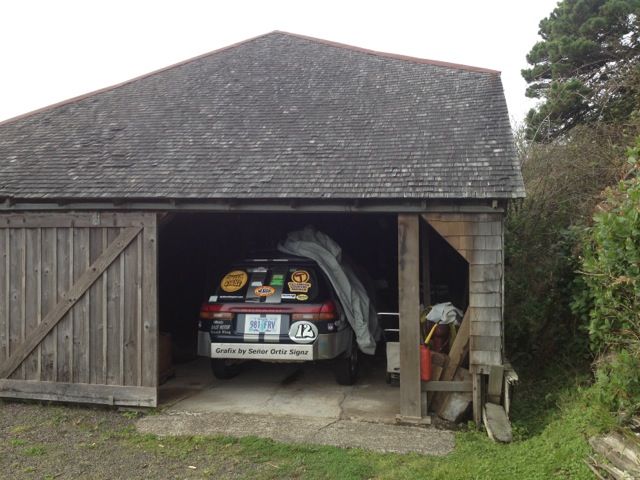 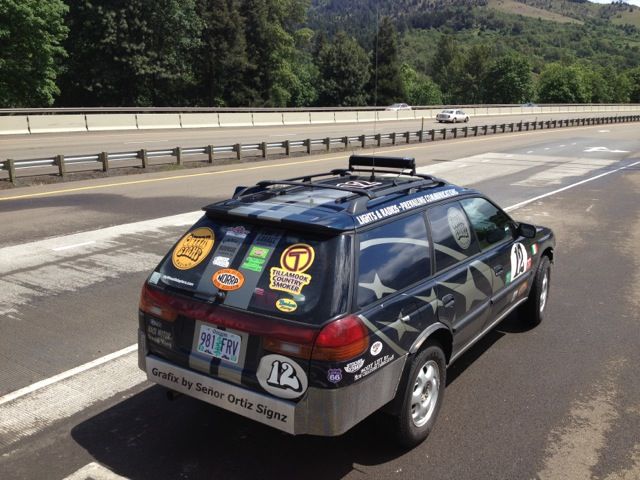 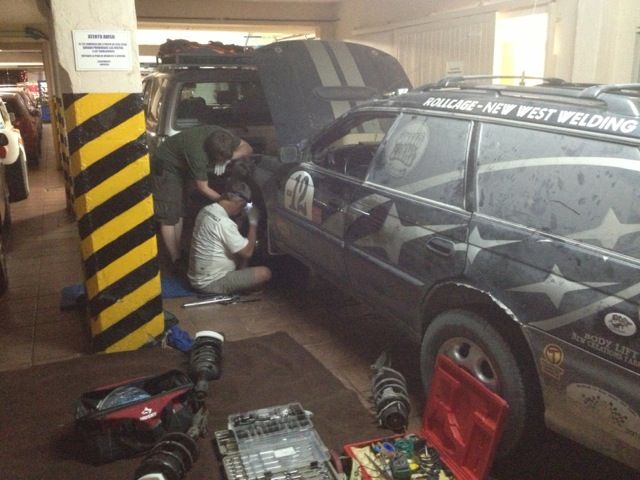 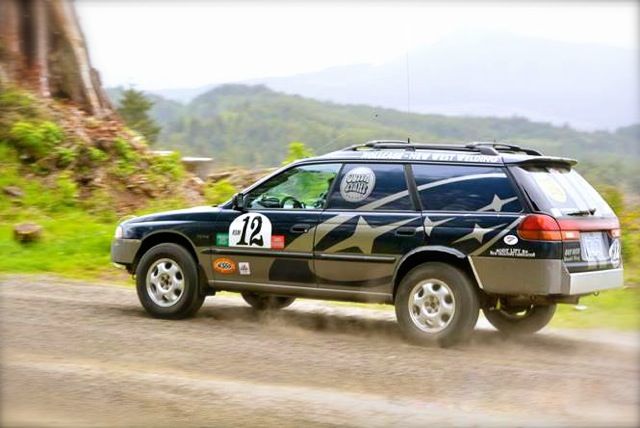 We started with a 1997 Subaru Legacy Outback I found for $700 on Craig’s List, which is also where I also found my Zen-master Subaru mechanic, David King, and his home-based Apple Automotive in Vancouver, WA. Dave has a knack for building reliable Subaru motors and a soft spot for lost causes. Dave sponsored us by only charging me for parts, his hundreds of hours of labor were gratis. The rules for that year called for non-turbo engines only, which was fine because I didn’t want to deal with the complexities of a turbo, nor did we need the speed. Dave built up a normally aspirated 2.5-liter stock motor into a true race motor, using Delta cams, ceramic tri-coating on the pistons and an external oil cooler. The complete engine build is detailed on Dave’s website here. The car was dubbed “Dirty Dorothy,” nickname in honor of a particularly spry elderly patient of my wife’s. 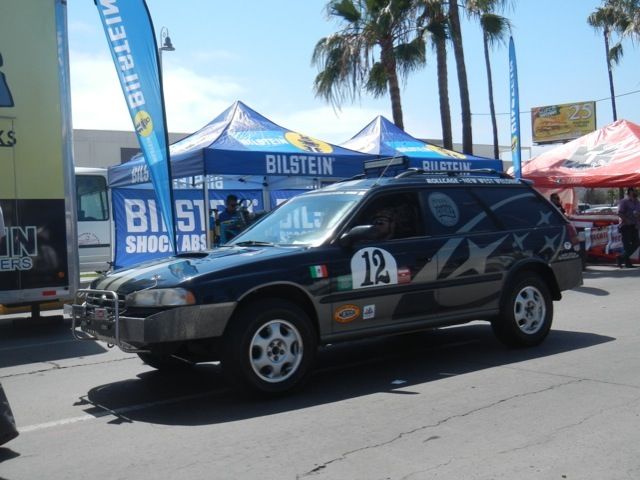 Although she looked like a ubiquitous grocery getter, Dorothy still needed the required safety equipment in order to enter the M1K. Luckily, my friend Ray L’Hommedieu is one of the best welders in the Northwest specializing in stainless steel and aluminum, and in between fabricating cheese making and brewery equipment, Ray TIG welded one helluva safe NASA Rally Sport spec roll cages for Dorothy. She also got race seats, 5-point harnesses and window nets. We gained ground clearance by lifting the car 2 inches via lift-blocks on the struts and installing taller 215/75/15 10-ply off-road tires on the stock aluminum rims. The airbags were removed, and we added a racing steering wheel, LED driving lights, emergency lights, a siren, and a custom navigation system. Cool graphics by my friend and artist Lonnie Ortiz rounded out the off-road racecar conversion for an otherwise ubiquitous Subaru Outback.

Although Dorothy was trailered down to San Diego and then driven to Mexicali for the 2013 M1K Rally, we decided to go hardcore expedition-style and drive Dorothy from our home on the North Oregon Coast down to the starting line in Ensenada for the 2014 running. The plan was to race the 1200-plus miles to Cabo – and then drive the car back home.

Luckily, I have a knack for getting the best people available to sign-on to my crazy ideas, and building Dorothy was no exception. I have already mentioned David, Lonnie and Ray. But we would never have achieved any measure of success without the participation of Tim Roach of Prevailing Communications (lights and radios), Super-Chaser and back-up driver Cory Burkhead, and chase team members Ted Sumner and cousin Mike. One should never underestimate the power of having an amazing team and/or support crew onboard whenever trying to accomplish a daunting task. For me, meeting and working with these people has been the most rewarding aspect of Dorothy’s whole existence. Not to mention how effective racing with your co-driver/navigator spouse down the length of the Baja Peninsula is at keeping a marriage fun and exciting! 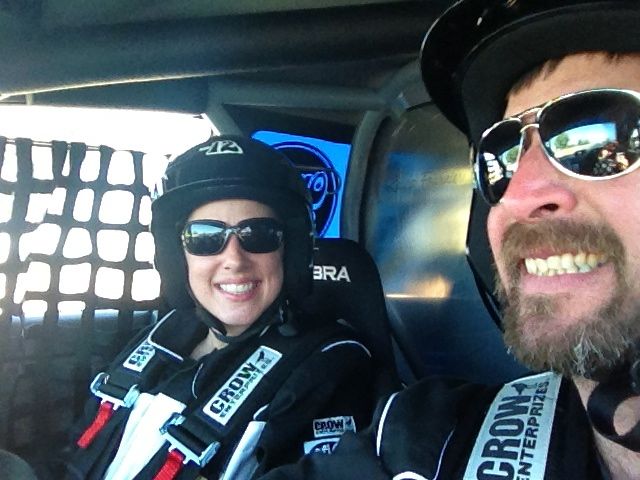 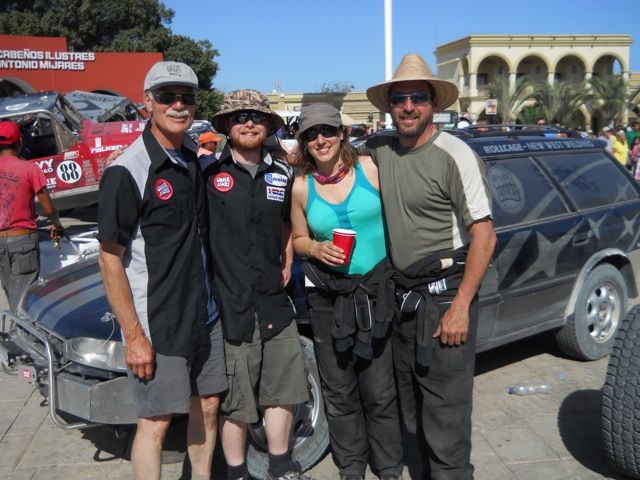 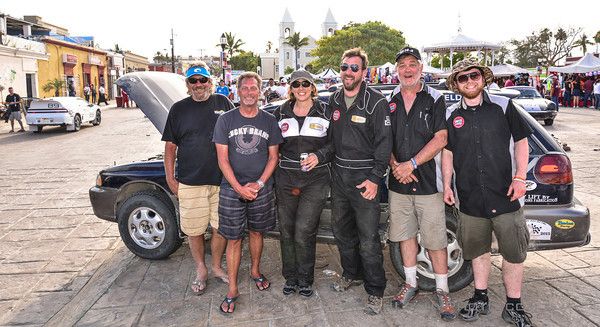 So…how did we do? One thing can be said about Baja – its appetite for suspension is ravenous! We initially broke our cheap-aftermarket struts, then the following year, bent every one of our two-thousand dollar coil-overs before realizing that new KYB struts and a set of King lifting springs would probably be sufficient enough for our purposes (especially if running the car in Expedition mode). But, we not only finished both years we raced in the M1K, we also won our class twice (so what if we were the only ones in the class!). For us it was always about survival and having fun. If we wanted to be truly competitive, we would have raced a buggy or a truck, not a station wagon. In those two years of racing, the car never had a single engine or major mechanical issue despite 2400-plus miles of racing in harsh conditions in 100-plus degree Fahrenheit and with huge variations in elevation. And this was all while having the air conditioning on, using low-octane Mexican pump gas, and occasionally maintaining speeds of over 100 miles-per-hour for many miles – oh don’t forget the 10,000 highway miles just to get to the races and back. 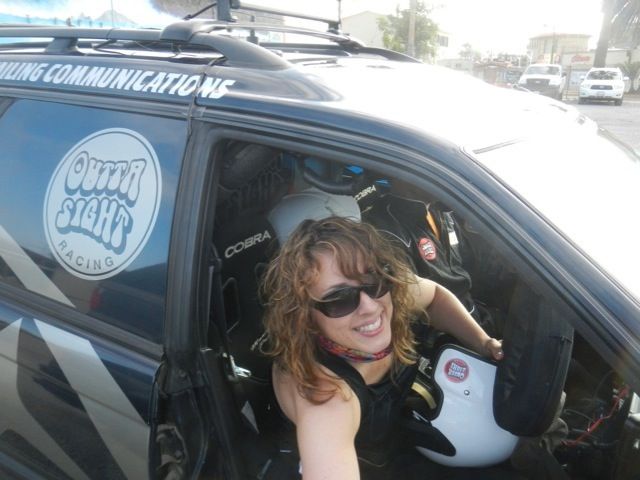 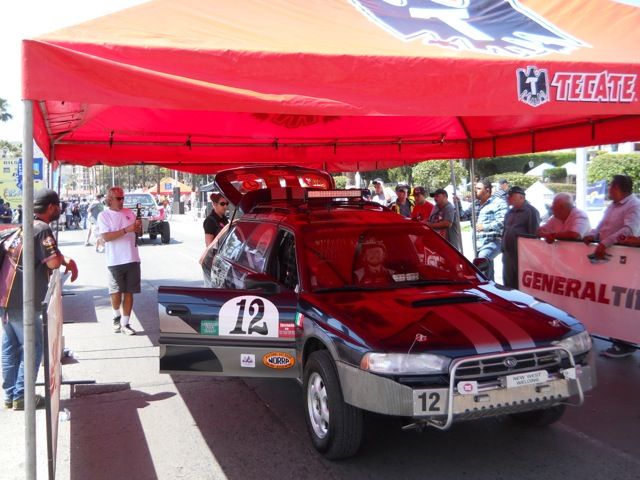 I’m still writing the story of our four-years of racing in Baja, but the story of Dorothy is not close to being over. We believe there are still a few races left in her, including another Baja run or two, a stage rally, a TSD rally and maybe even the Alcan 5000. However, her main duties for this year will be to serve as our desert exploration/expedition vehicle. That said, we most likely try and sneak in the Cortez Rally – Rally Raid taking place this April in the Sonora Desert – mostly because it looks like an interesting challenge, and I doubt they’ll be anyone else stupid enough to try and race a Subaru Outback.

Crossing The Congo: Over Land And Water In A Hard Place
by Mike Martin, Chloe Baker, Charlie Hatch-Barnwell
From $29.95From CAD$27.72 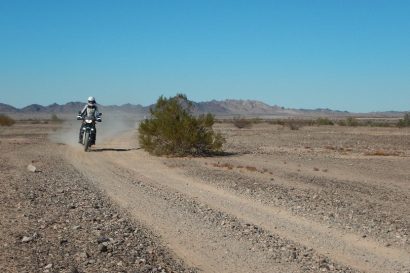 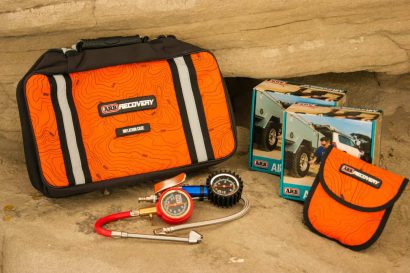