I was lucky enough recently to get the opportunity to join Paul May from Equipt Outfitters at the Cruise Moab event and more importantly the overnighter before. Just in case you don’t know about this awesome event it is essentially a get together of the most reliable cars ever, Toyota Land Cruisers. While not every car there is a Land Crusier, you also find a smattering of 4runners old and new, but Cruisers are the basis of the event. And if you haven’t guessed, it’s in Moab.

The overnighter in San Rafael Swell before the event starts has become a thing of legendary repute with the limited 25 spots filling in about 10 minutes. It is not the trails themselves that are the big draw, it is simply the atmosphere of the trip as a whole. Paul attempted to explain this too me before we headed out, but I was unable to truly grasp it. The best way I could try to describe it is to say it is a gathering of your best friends, who happen to be strangers, at least for me. Within minutes of meeting everyone, it was clear we all had one thing in common––the love of Cruisers.

It turns out that Paul is a bit of an icon within the group and when we rolled up he had a spot saved for him, so we swung the trailer in and set up camp. It did take us almost 10 hours to get there, we were in a 5th Gen 4runner with trailer. Not that the car was slow, but it was certainly worth it in the end. The first night consisted of getting to know everyone while all I could see were peoples eyes, it was damn cold, even near the fire, so everyone was rugged up to the nines. 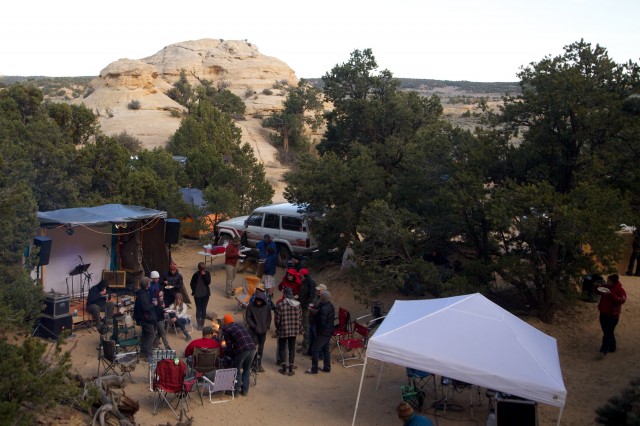 After spending the night dressed in almost every item of clothing I had with me, I got up the next morning to a beautiful morning, albeit a cold one. I was jumping into a BJ74 for the day with Kurt from Cruiser Outfitters. I had met him through Expedition 7 back in Aus so it was good to catch up. After a few brief driver meetings we hit the road and headed for Devils Racetrack. This was a great track that ran around the edges of the Canyon and offered plenty of challenges, even for the cars with the best set-ups. 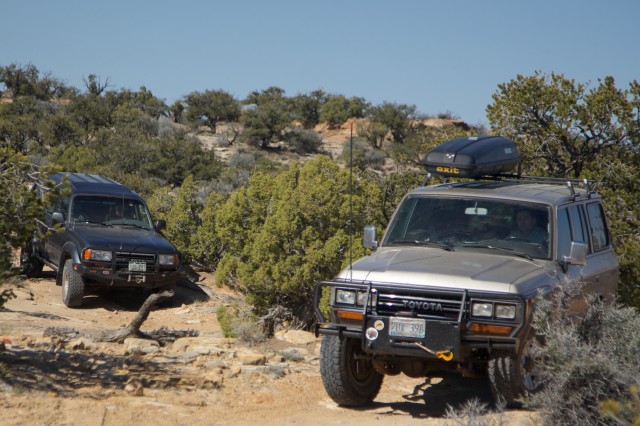 It is impossible to describe how spectacular the area was, even the pictures don’t truly do it justice. A number of people have said that southern Utah is at the top of their list of most spectacular places they have seen, including some very well traveled people, and I would have to agree. If I’m lucky I might get to spend a bit more time there in the future. 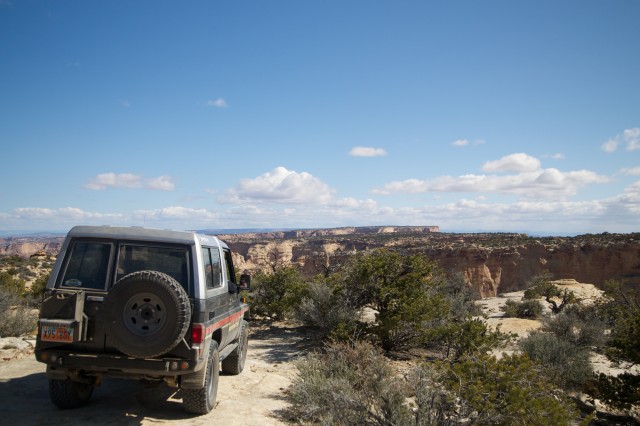 After the day out driving, we made a B-line back for the campsite. When we arrived we found out why Paul is so iconic. The Lone Soldier had been erected, a wooden bar that Paul assembles and dismantles just for the night. This year it had three home brews on tap, an amber ale, an oatmeal stout, and a saison, all of which were greatly appreciated by everyone there, finishing almost 15 gallons in the night. 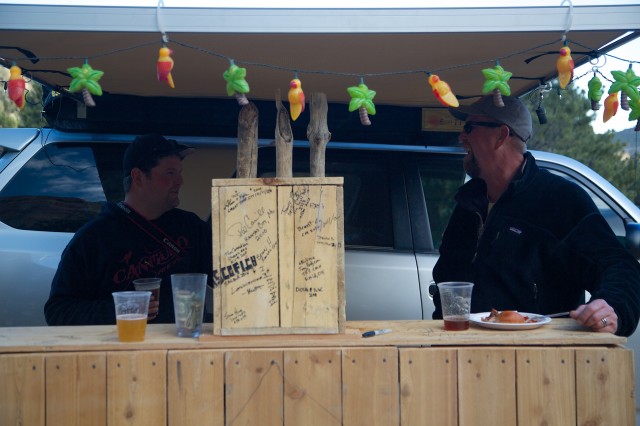 The night was filled with entertainment and festivities. This began with a group dinner of pulled pork buns and various salads, tirelessly prepared by a couple of guys from the Wasatch Cruiser Club. By the time we were all done, we had a roaring fire to ensure that we were substantially less cold then the night before. On top of that we also had a full stage and band that kept us going with a few great classics, I even did a rendition of Land Down Under by Men At Work. It was one night I wont forget for a while. 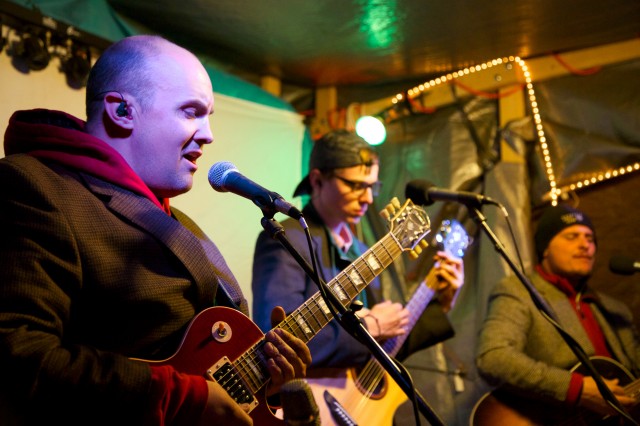 Breakfast was on hand when we awoke the next day, a tasty egg and sausage breakfast burrito, it certainly hit the spot. Once packed down we were on the road again, this time headed for Black Dragon Canyon and eventually Moab. This run again was as spectacular as the day before, just in a different way. This run had more time driving in river wash, with some high-speed sections which were enjoyable. This time I was riding along with Paul in the 4Runner, so it was nice to have a few extra luxuries. After popping out of that track, some of us headed to a well talked about burger joint in Green river called Rays.

After a tasty burger we made our final move towards Moab. The trip back to Moab was very eventful as the truck started to develop a shake. After stopping, we were not able to see anything out of place, but it turns out we were not looking in the right place. As we went to take off again we knew something wasn’t right and it turns out the front passenger wheel nuts were coming loose and the rim was beginning to fall off the hub. Thankfully we caught it in time and had no further problems for the rest of the umpteen miles we did. 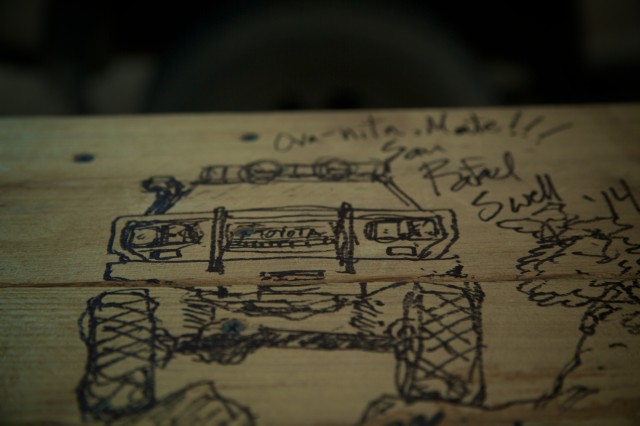 I will leave this particular story here, I could go on about what I got up to in Moab but I wouldn’t want to make you too jealous.

I will however say that Cruise Moab is defiantly an event worth attending if you ever get the chance. Plenty of camaraderie and even more knowledge about Land Cruisers all makes it a worthwhile trip if that tickles your fancy. 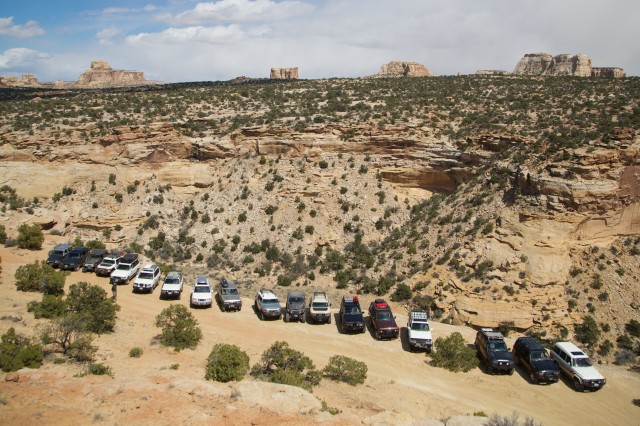 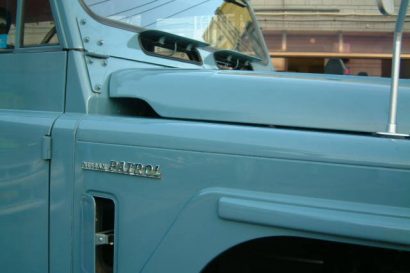 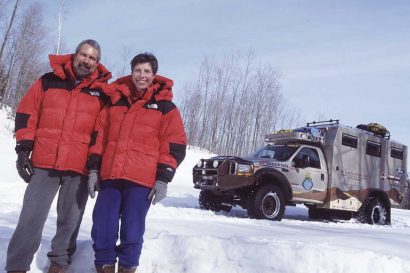 Living Legends: Gary and Monika Wescott of the Turtle Expedition 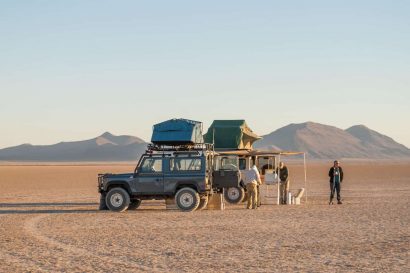 You Know You’re An Overlander When…