Wrapped in bacon and pan fried with plenty of salt and butter, James and I were furiously consuming what may have been the moistest steaks either of us had ever eaten. It’s difficult to say though, it was pouring with such force that much of that was likely just rain flavored with steak juices. But no matter, this is just part of the fun and we had our tents set up before the rain came. One great advantage of eating in the rain? Mother nature does most of your dishes.

This was only our first night of six planned for southern Colorado. Despite the downpour that began the instant our steaks were done, the days drive from Prescott to our camp north of Dolores had been quite uneventful. With a new 5 speed transmission in the old FJ60, 80 miles per hour was pleasantly possible despite the factory 2F motor. Saturday morning greeted us with a continuing threat of rain until we reached Ophir, where the weather broke and we were had our first views of the Rocky Mountains and Ophir Pass. Though Ophir Pass was just a quick out and back for us it was well worth the drive. Another quick detour was had through Telluride and up to Bridal Veil Falls for lunch on the tailgate. 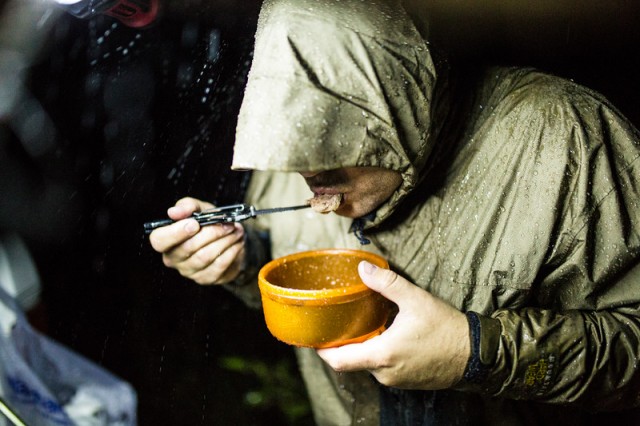 There was a music festival going in Telluride, but despite the tourist crowds in town we only encountered one other vehicle climbing Tomboy Road. This was just fine by us, giving plenty of opportunities to ogle the views before reaching the Tomboy Mine. At  Imogene Pass the dogs had the time of their life bounding through snow drifts. I pulled up to an overlook just east of Imogene Pass looking to stretch our legs a bit more. Two days in the driver’s seat had left me itching to get away from the truck for a bit, so I walked up to snoop around the old Army lookout hut at the peak. James changed shoes while I was checking out the hut and we then walked down to Ptarmigan Lake. I had dreams of loading my pack and spending the night on the lake, but James was a little more skeptical and insisted on leaving the packs behind; and he was right. The walk was harder than I thought, especially at 13,000ft and deep snowdrifts crossing the road didn’t help any. Despite the amazing views from the old miners cabin, I finally relented and we returned to the Land Cruiser. On the way down we met a Phoenician named Marty who had sank his FJ Cruiser in a snow bank. Good thing we happened along when we did, otherwise a Jeep might have had to pull him from the snow and that wouldn’t be good for any self respecting Toyota owner. Not too much further down the road James and I made camp in an old cabin at Upper Bird Camp. 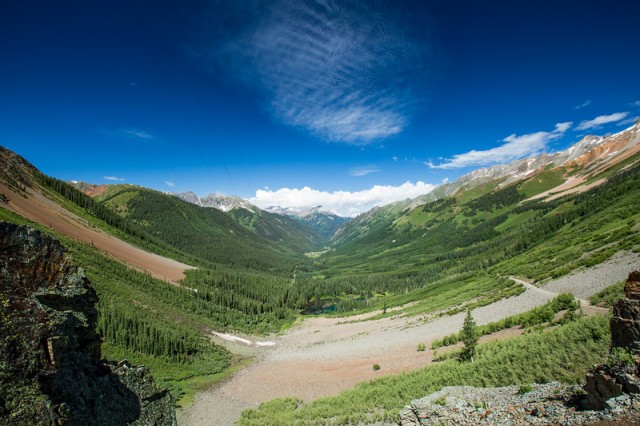 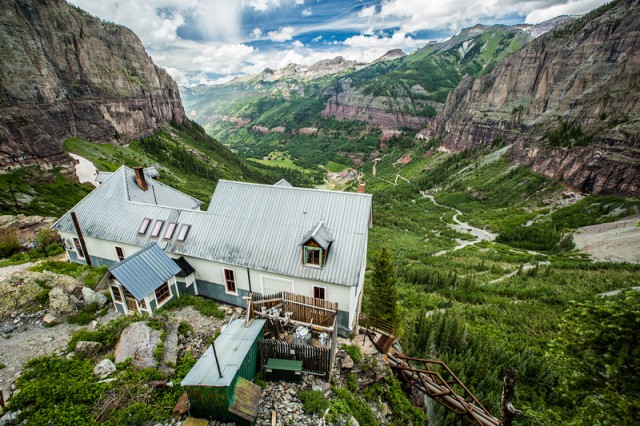 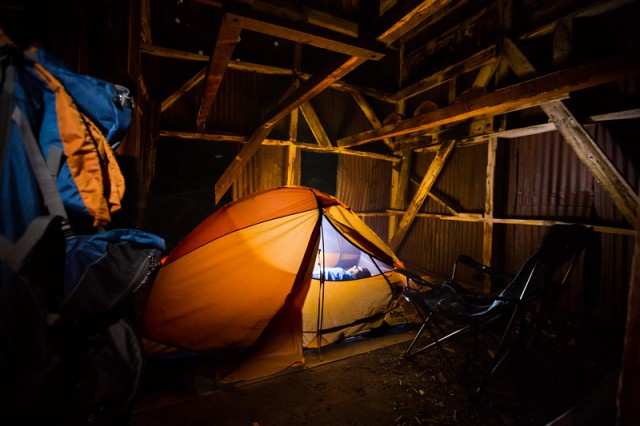 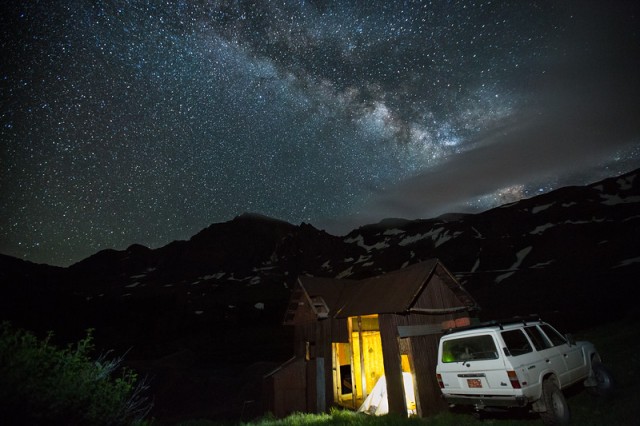 By noon Sunday burgers and a pint were had at the Ouray Brewery while James and I studied the maps for Engineer Pass. By this point we were both getting leery of the trip reports we had read from others. Not that the FJ60 was having any trouble, or the roads were beyond our comfort levels, but the reports claimed things such as Subaruable for Imogene; Bollocks. That said, the only trouble we had getting to Engineer Pass was convincing the Range Rover Sport driver and his friends in their side by side to reverse 20ft up the trail rather than our reversing a quarter mile down the trail. Personally I feel it should be a flexible thing based upon location of pullouts but if they are reading this; No, the rules of the road aren’t randomly different in Colorado, those going uphill do have right away. After the short detour to Engineer Pass, we returned to the large mine near Mineral Creek for the night. Again camping in an old mine cabin we moved in before the rains began, enjoying our drinks of choice with our pipes. Soon the sun was setting with a spectacular double rainbow over camp and a light sun-shower.

A Dark and Stormy and a Mojito made with Silverton distilled rum seemed like a good way to finish off the Alpine loop Monday afternoon. The day had been filled with more spectacular scenery on the way down through Animas Forks, including a tailgate lunch while watching people drown their Jeeps in a nearby ford. The plan was to camp near Clear Lake, then backpack into Ice Lake for two nights of spectacular scenery. Our first clue of that plan’s demise was while enjoying the rum looking at NOAA. 60% chance of rain the next two days and starting tonight. That played out as scripted soon after making our way to Clear Lake and setting camp. The weather thankfully broke long enough for some spectacular views to be had however, so I got plenty of exercise running all around Clear Lake with the camera. By morning the rains had returned in full and we agreed a new plan was needed. Based upon weather, we opted to make a pavement run up to Black Canyon of the Gunnison National Park. 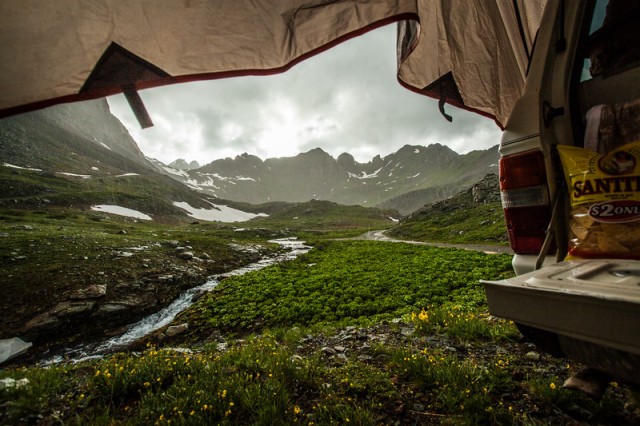 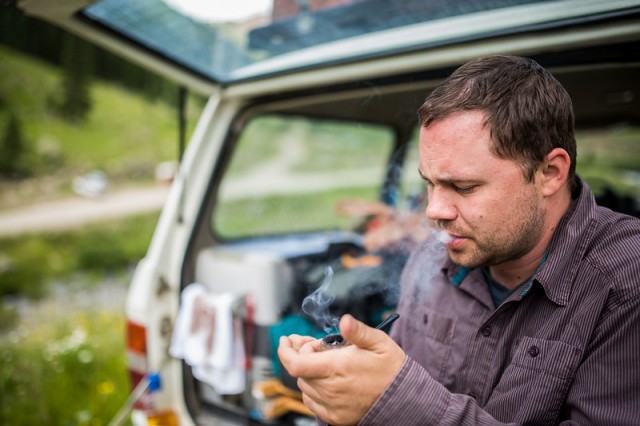 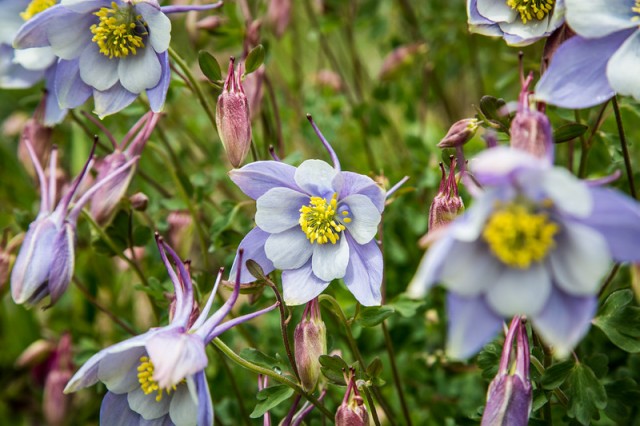 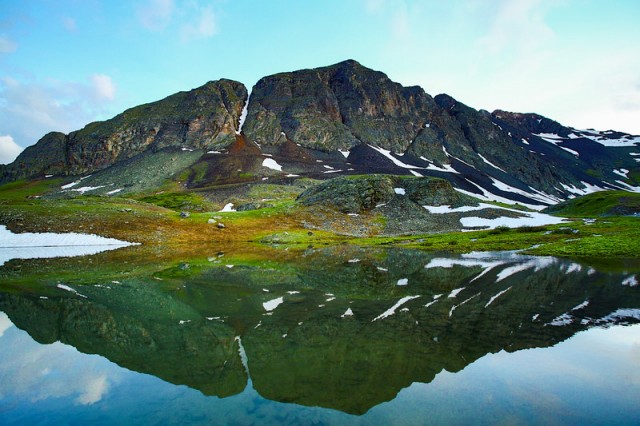 For anyone thinking of going––do. Montrose is nothing to boggle the mind, but the National Park is pretty stunning; and the routes (the Park Service doesn’t see fit to call them trails) to the river are pretty epic. I arose at 5:45 for a good breakfast and the mile walk down to the Visitors Center to fill out my back country permit. Why such an early start for a measly two mile round trip hike? Because, that one mile route from Visitors Center to the river drops 1,800 feet, that’s why. That is the easy route too! Again, for anyone thinking of going, do. It’s only two miles, just try not to think about 3,600 feet of total elevation change in that two miles. For obvious enough reasons, I had no interest in putting forth the effort to find another campsite outside the park, so stars were again gazed from the South Rim Campground.

Montrose’s inability to impress largely had to do with my inability to find a decent breakfast there at 9am on a Thursday. We finally stopped for a breakfast burrito made fresh to order. Too bad it was made with Kraft cheese, Jimmy Dean sausage and they didn’t have any coffee. Such is life I guess, not everything can be perfect. Coffee was had at a barista across the street and it was now time to head for home. Being homeward bound doesn’t mean the fun is over though, Black Bear Pass is on the way and had just opened that week. This lead us to some more amazing views, fields of wild flowers, and the only mud bog of the trip. Nothing 33 inch Mud Terrains can’t handle, but it’s worth a thought for anyone with lower vehicles since even my lifted FJ60 was dragging the frame most of the way. After another lunch near Bridal Veil Falls, James and I met a friendly family with quite the story to tell; The parents had been born in Telluride. Grandpa had worked the mine at Via Ferrata, and Great Grandma had been brought down from the Tom Boy in winter where her husband worked through the mines and trams to give birth in Telluride. 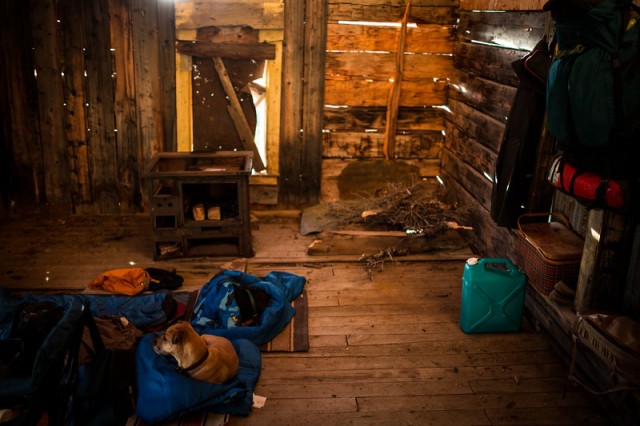 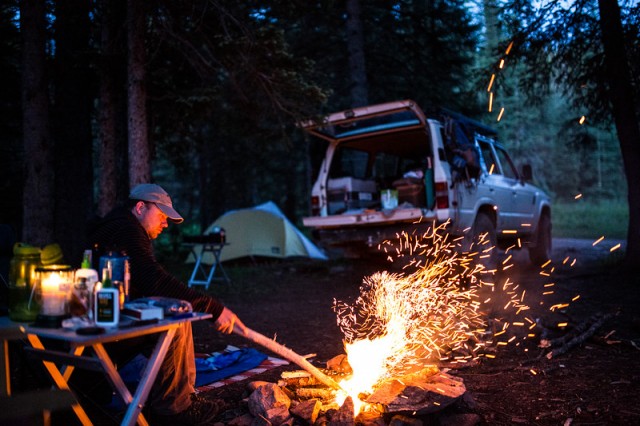 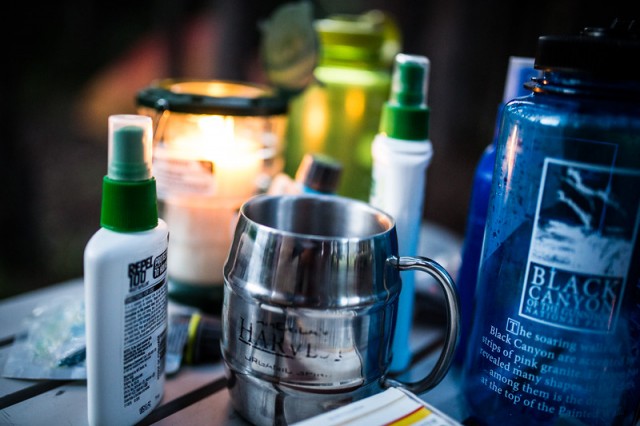 Our final camp of the trip was had west of Dunton on the Dunton Road. The dogs ran and played until they dropped while James and I sipped some Bundy rum and smoked our pipes around the first campfire of the trip. With visions of the Milky Way fresh in our minds we crawled into our mosquito proof tents. Fridays drive was of course long, made worse by a fierce west wind badgering the poor 2F motor down to 55mph. We did, however, make a quick scouting trip through Canyon de Chelly National Monument on our way, a must see site to return to on another trip. 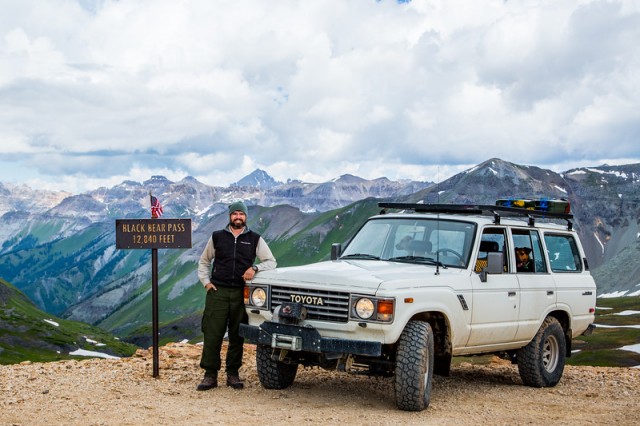 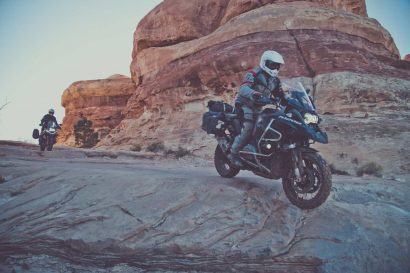 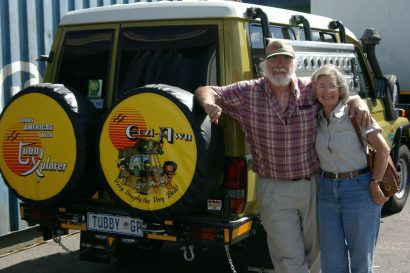