Every overlander has a need for storage solutions capable of protecting valuable gear from the hazards of extended travel. Cases like those from Pelican and Alu-Box have both been favorites of the overlander despite their significant differences. For our latest Head to Head evaluation, I take a closer look at these two options to determine if one case reigns supreme. Entering into this evaluation with a bit of a preference, I admit my opinion has changed. 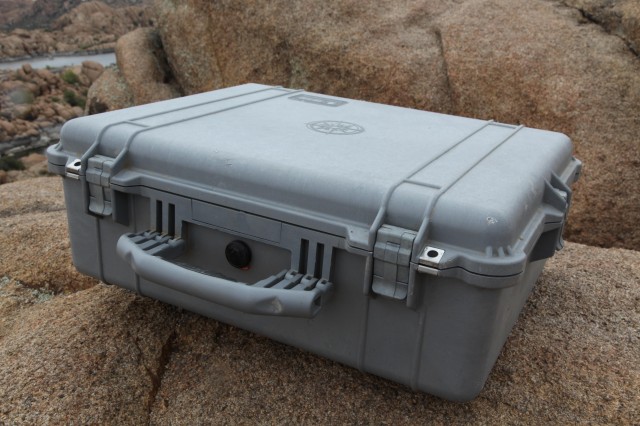 The Pelican 1600 is one of the more popular cases in the extensive Pelican lineup. With 46 liters of storage capacity it is one of their largest cases offered in the traditional Pelican format, which is to say it has a single handle and no extra features such as rolling wheels or retractable handles. Like all Pelican cases, it is constructed of roto-molded plastic, a manufacturing process that yields a case with highly sculpted shapes and impressive durability. The 1600 also employs Pelican’s integrated hinge technology, a full rubber gasket around the perimeter of the lid, four double-hinged closures, a large rubberized handle, and a unique pressure equalization valve to prohibit the case from effectively locking shut with changes in pressure. The 1600 also has two stainless steel padlock hasps and an insert for a label or personalized tag.

One of the most notable benefits to the 1600, or any Pelican case for that matter, is its waterproofness. Rated to a depth of 1 meter for 30 minutes, the 1600 is unfazed by assaults from rain, dust, or other intrusions. The roto-molded construction is also more crush resistant than would seem plausible for a case made of plastic, a material often chided as being cheap and flimsy. It is nearly impossible to crack or dent a Pelican case and the operating temperature range for the 1600 dips as low as -40Fº with a scorching high exceeding 200Fº. 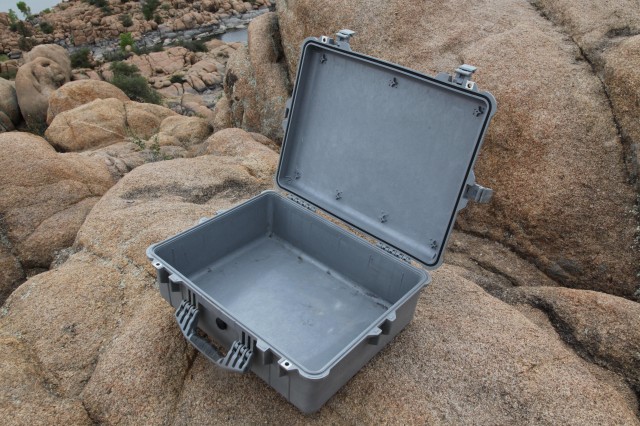 For those needing a case for sensitive items like camera gear and electronics, a Pelican case is a trusted vault, especially if the interior is fitted with Pelican’s highly regarded Pick N Pluck foam inserts. Another positive attribute of the Pelican 1600 is its large suitcase-inspired configuration. The slender shape coupled with the oversized handle make it a comfortable carry even when filled with heavy items. It can be transported in the tight confines of a vehicle standing up or on its side and the large lid and relatively shallow depth facilitate unobstructed access the case’s contents. Having used this case on countless outings spanning the past six years, I have to say my Pelican 1600 has performed flawlessly and looks as good today as it did on day one.

This brings us to some of the inherent drawbacks to the Pelican 1600. While roto-molding produces a very durable and watertight case with a minimum of components, it is also rather bulky and heavy. The Pelican 1600 tips the scales at a full 14 pounds and has a large exterior dimension relative to its interior capacity. I often lament the minimal amount of storage capacity afforded by a case with such a large physical presence. If I get really particular about the design of the Pelican 1600, I might also peg the lack of tie-down points as a minor complaint. That’s getting downright picky, but those are the only minor faults I can file. 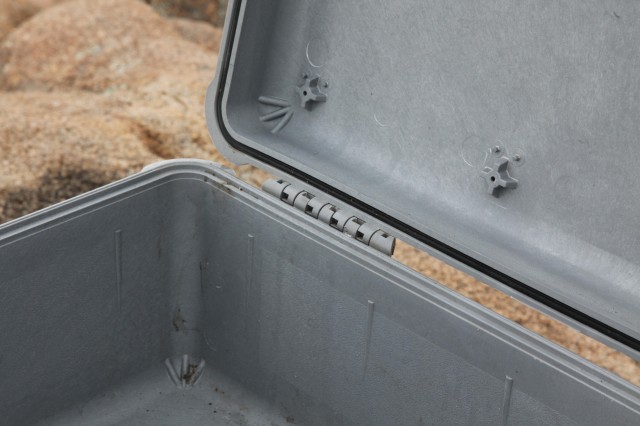 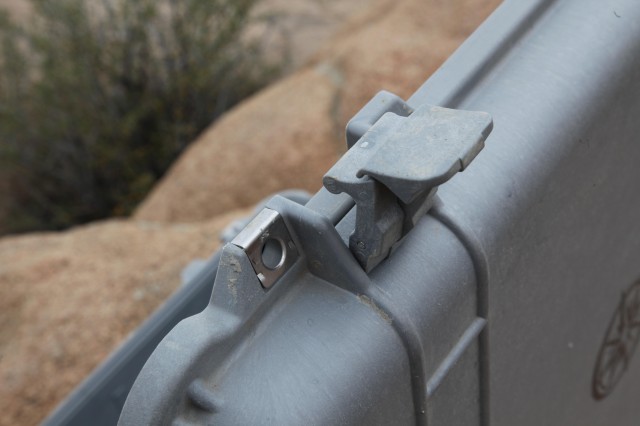 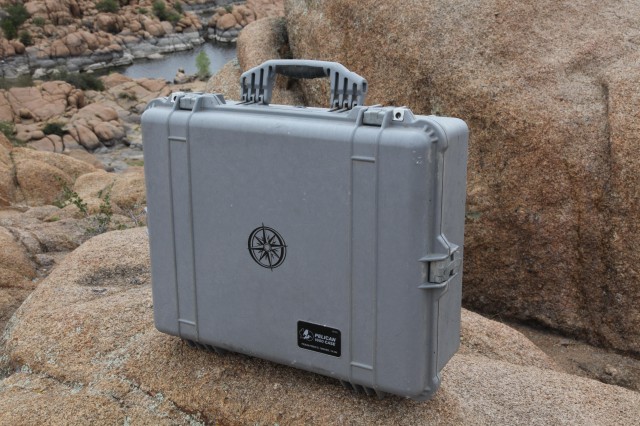 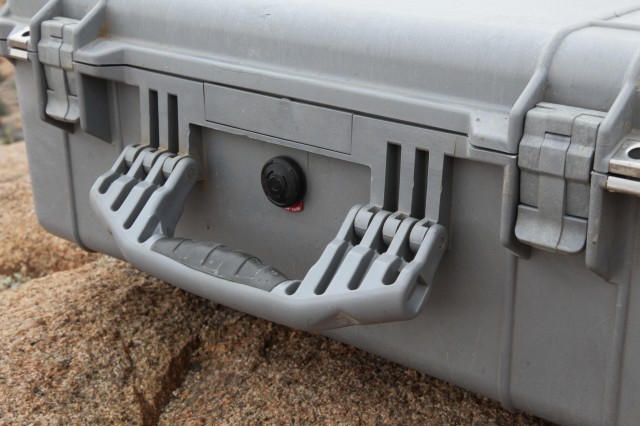 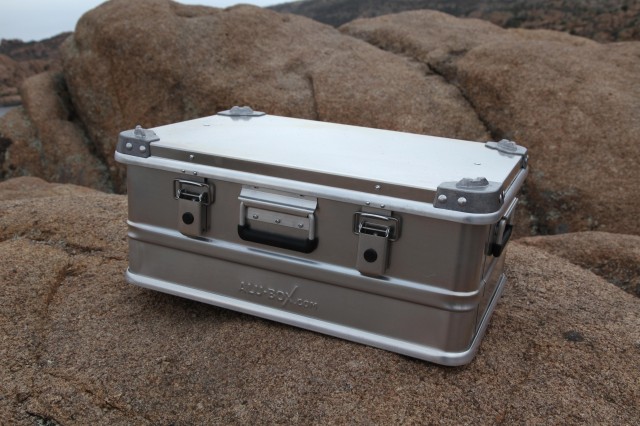 Because I have relatively little experience with Alu-Box, I enlisted the help of overlanders who have owned and traveled with these cases for several years over the course of many thousands of miles. Their insight was invaluable and their stories of Alu-Boxes surviving unimaginable assaults confirmed the good reputation I had come to associate with the brand. In evaluating the Alu-Box, I first emptied the contents of my Pelican 1600 and transferred them directly to the ABA42. I was surprised how similar the volume appeared to be given the Alu-Box is 4 liters smaller. I’m inclined to attribute that to the shape of the ABA42’s interior, but I’ll touch on that more in a minute.

As the name would imply, the Alu-Box is an all-metal case constructed of high quality aluminum components. The sides of the case are made of precision-bent sheet aluminum with interlocking seams. The base perimeter is made of extruded aluminum and the corners of the lid are reinforced with cast aluminum fittings that not only protect the corners from damage, but facilitate the secure stacking of multiple cases. The handles and lock-compatible latches are also made of aluminum and a rubber gasket at the lid interface seals out moisture and dust. The ABA42 also features handles on three sides for easy carry and secure lashing. Those handles are spring-loaded to hold them in place against the sides of the case, thus reducing any unwanted rattling. 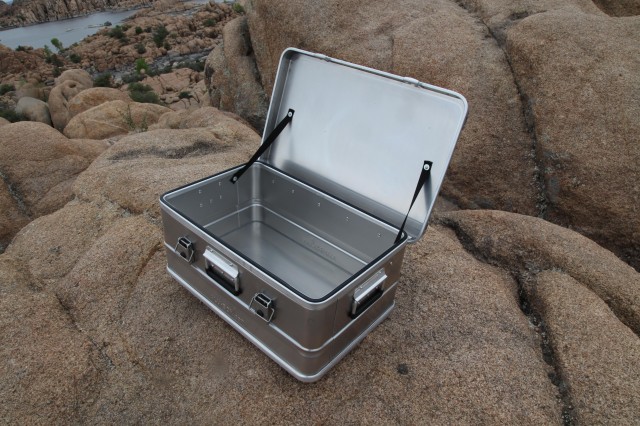 There are several key benefits to an all-aluminum case, the most obvious is the reduced weight and bulk. At only 9.9 pounds, the ABA42 is capable of hauling an impressive 220 pounds. Because the wall thickness is so thin, the exterior dimensions are nearly identical to the interior giving it an excellent size to volume ratio. It also has an operating temperature range with a low of -238Fº and a high of over 300Fº. The quality of fabrication is astoundingly precise and it certainly looks the part of expedition grade equipment.

In addressing the finer points of the ABA42, I couldn’t help but appreciate the efficiency of the available storage space. Whereas the Pelican case has a relatively rounded interior with a deeper lid, the low-profile lid of the Alu-Box paired to its more box-like interior seemed to accept my gear with greater ease. It made me realize how bulky and doughy a Pelican case really is. When stacking multiple Alu-Box cases I had to admit, it is an extremely efficient system. I can see why many professional expeditions rely on Alu-Box cases as the stacking capabilities are reason enough to buy them. I can also see how an Alu-Box will provide a lifetime of rugged use. Aside from the replaceable rubber gasket, there is nothing to ware or degrade due to UV or weather exposure.

As is true for nearly every product, nothing is perfect and that holds true the Alu-Box. It is surprisingly water resistant, but it can’t make the claim of being fully waterproof. That said, many users are quick to assert that they’ve traveled for thousands of miles with an Alu-Box on the roof of a vehicle and even after countless storms, their cases have always fended off the ingress of water. While I feel it safe to call the Alu-Box sufficiently weatherproof, I can’t say it has the overall durability of the Pelican. The aluminum exterior can obviously dent and scratch. Call it expeditionary patina, it’s unlikely an Alu-Box will get so damaged as to become unusable, but it may develop some “character” after a few years. 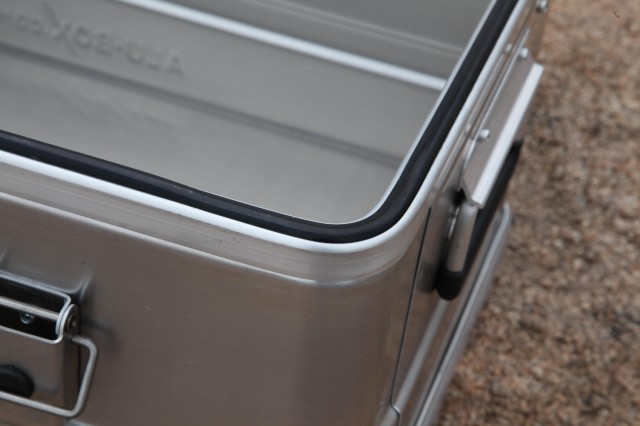 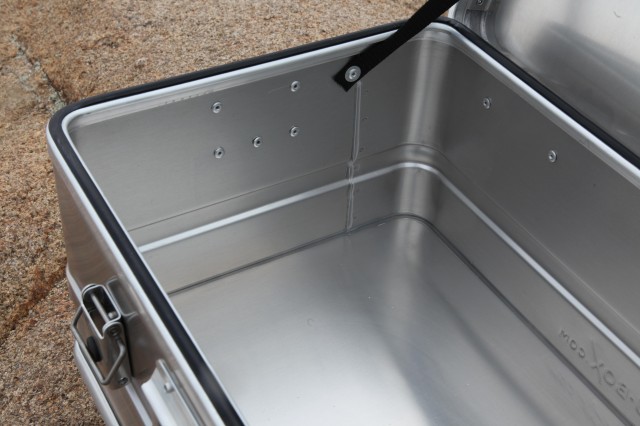 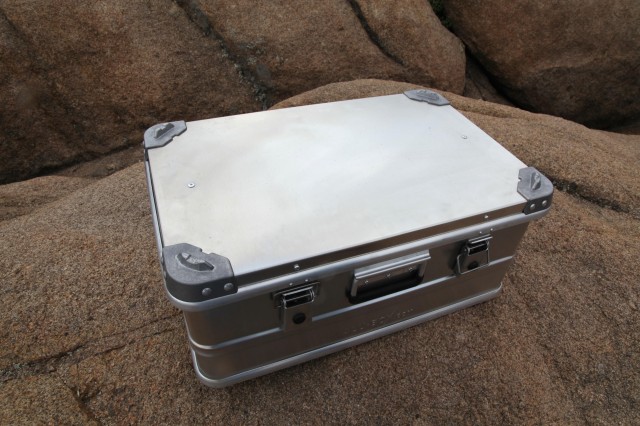 This is another one of those Head to Head comparisons that forces me to split hairs, double back on my initial impressions, and scratch my chin once more. For delicate electronics faced with the potential threat of being drowned or crushed, I would (and do) accept the size to volume compromises of the Pelican case. For everything else, I think I am an Alu-Box convert. There are other factors I should fully integrate into the discussion like purchase price and warranty. The Alu-Box is a tad more expensive than the Pelican, only because Pelican can’t seem to regulate their supply chain. Blowout prices for a 1600 case can be found for as low as $180. The Pelican does come with a lifetime warranty to the Alu-Box’s rather humble one-year warranty. Either case is likely to outlive the user, so value and warranty issues are somewhat moot. I could use the ABA42 for the next three decades for an annual investment on par with a fancy coffee.

This is a tough one, but I’m going to make the call. For smaller cases used to protect cameras and electronics, I’ll give the edge to Pelican. For larger cases, especially those in the 40 liter range and bigger––Alu-Box seems the better choice, if just barely.

Special thanks to Paul May of Equipt Expeditions Outfitters for his assistance…once again…in compiling this review. www.equipt1.com