As a teenager in New Delhi, Amarjeet Singh longed to roam free and travel the world. He dreamt of meeting people and sharing ideas, food, and culture. But when Singh told his father of his plans, his father became upset. “This is not the time for you to travel,” his father said. “This is the time for you to settle down and do something for your career.” So, he did. Singh ran a successful garment export business, got married, and had kids. At age 60, he decided it was time to check off the first item on his bucket list: traveling by road.

On July 7, 2018, Singh took off from New Delhi in his 2013 Toyota Fortuner, traveling 40,000 kilometers in 131 days. He drove to Nepal, through China, across Central Asia and Russia, to Estonia, Lithuania, and Latvia. From there, he continued through Scandinavia, eventually arriving in London on December 16, 2018.

For Singh, the gurus of the Sikh religion have inspired much of his travels. He has followed in their footsteps, both in India and abroad. But what really brings a twinkle to his eye are the people. From his encounter with Arnold Schwarzenegger in Hungary to kind strangers in Italy, Singh not only collects signatures on his Toyota Fortuner but heart-warming tales from interactions with the people he meets along the way. 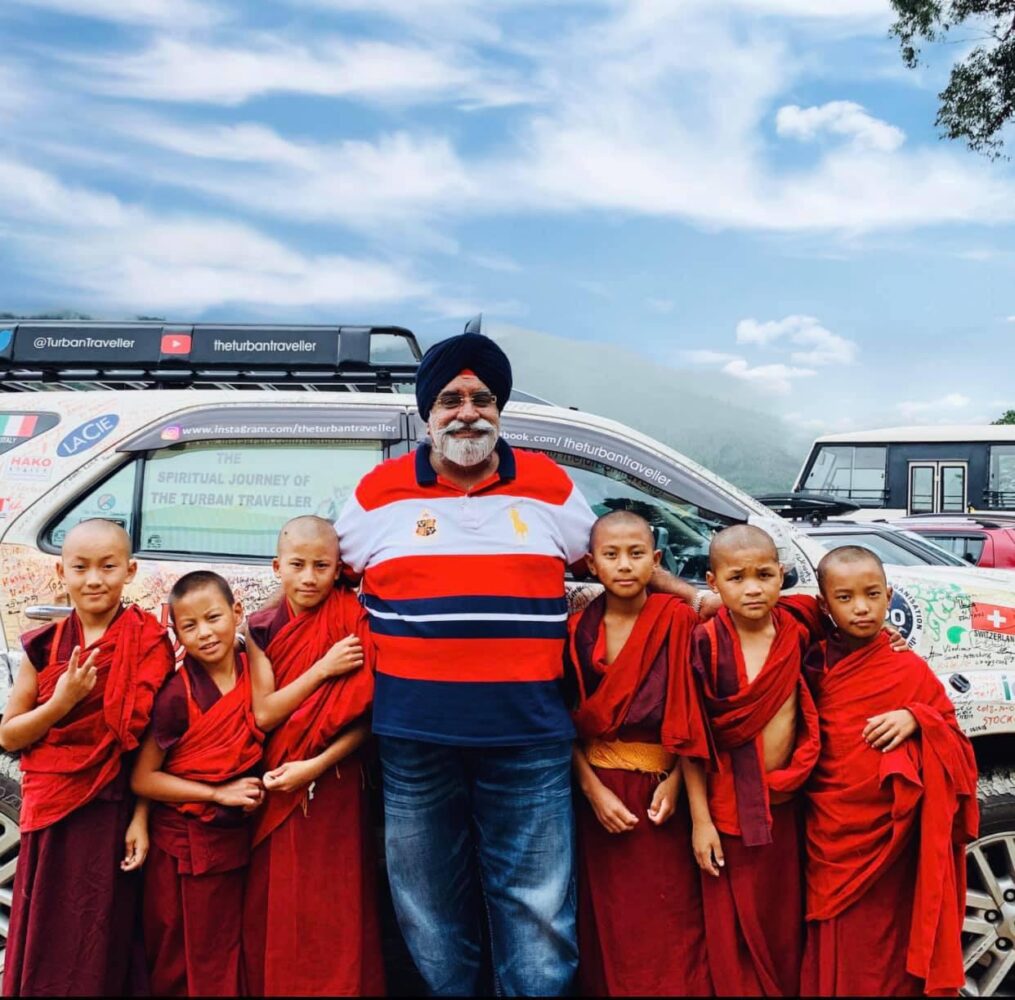 When you were 19 years old, you met a young couple from Holland—Julia and Robert—who traveled by road through India and Pakistan. What impact did this couple have on you at that time?

We first met in New Delhi, and then [again] roughly two days [later]. There is a place near Delhi, a tourist resort and health club. Julia met me there at the pool. Once you meet people twice, you become friends. I told them to come and stay with us. They were very nice and stayed with us for about 15 days.

The journey they were doing inspired me, because I was thinking if they can, why can’t I? My friend and I both decided, okay, let’s do it. We’ll go on a motorbike. For various reasons, we couldn’t do it at the time, but the dream was that one day I [would] do it. Time passed by, so many years. I was involved in my business, got married, had kids. Forty years passed, and one day, I decided, okay, it’s enough. No more making money. So, I created my bucket list. On the bucket list, the first thing was that I needed to travel by road.

Robert and Julia had such an impact on your life that you surprised Julia by arriving at her front door in Holland during your own trip from India to London 40 years later. How did you track down the couple after so many years had passed?

It was tough, but it took me about two to three months to find them. I didn’t have their address or their last name. Eventually, I found Robert’s last name, and there were 700 to 800 people with that last name. I called them, and he was the one who remembered that we shared a photograph. He said they were in Holland and that he and Julia were still together and had two kids. It was a dream come true to find them. I said [to Robert], “Don’t tell her. Once I come there, I will give her a surprise.” I knocked on the door and had a photograph. She recognized me and said, “Hey, Amarjeet! How are you?” Then we hugged each other and cried. It was a very emotional moment. Finding somebody after 40 years–that was a really great moment of my life. 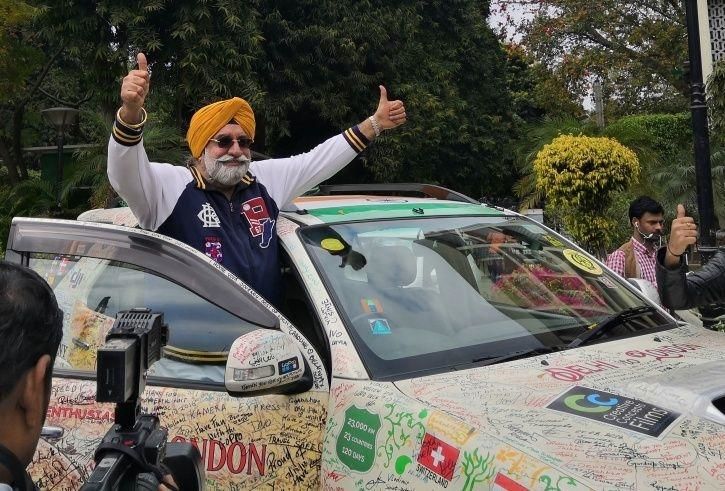 You eat a vegetarian diet. How easy was it to find good vegetarian food along the way?

You can get vegetarian food everywhere in the world, but the only problem is you have to find it. I had a tough time in China because the route we took, from India to Nepal and Tibet and then to Kashgar, China, was more than 3,500 kilometers. There wasn’t a single vegetarian restaurant along the way. Those 14 days were miserable for me. Another problem was that we had an agent who was with us, accompanying us through China, so we couldn’t go to every restaurant or stay in every hotel or guest house. I have been to China many times for my business, either in Shanghai or Beijing. I never had a problem with the food. This route was just such that we couldn’t find any vegetarian food.
The best food was in England, especially in London as there are many Indian restaurants there. I also love Italian food. A good friend of mine lives there, and while I stayed with him, we had such good food.

You traveled from India to London in a 2013 Toyota Fortuner. Why did you choose this vehicle for the trip?

When we planned our trip, I was told by one of my consultants that I needed to have a four-wheel-drive vehicle. I said, ‘Four-by-four! I have a Toyota!’ I had a five-year-old car with only 121,000 kilometers. I assume Toyota is the most reliable brand in the world, as far as small cars are concerned. I believed in that car, and the car was so nice and tough that I didn’t have any problem driving it. 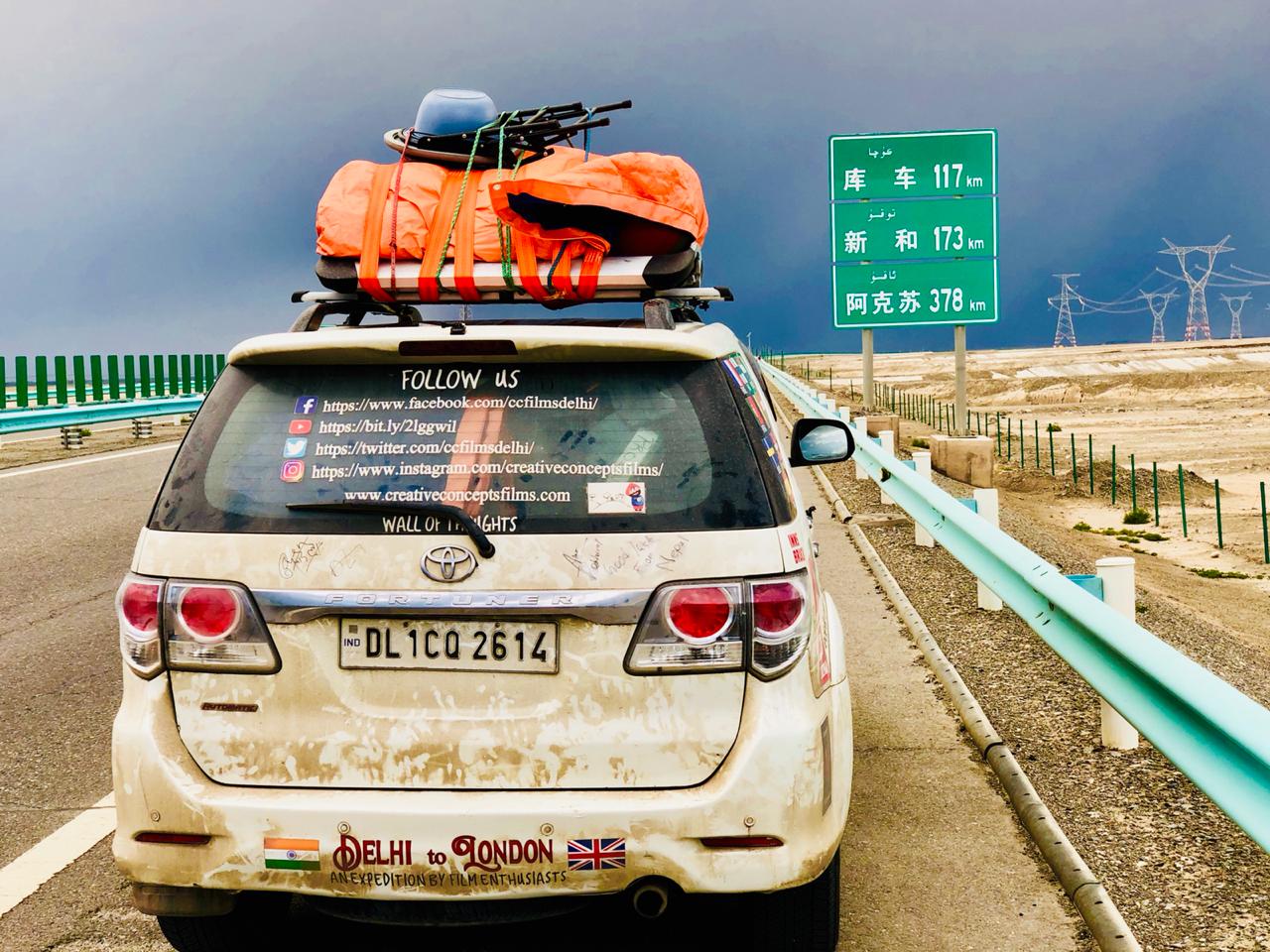 Did you make any modifications to the vehicle before you left on the trip?

No, not at all. I did repair the steering, brakes, and suspension. If you’re on such a long journey, you need a comfortable ride.

What were some memorable moments along the way?

I met Arnold Schwarzenegger, which was a great surprise for me. He met me in Budapest, Hungary, and signed my car. He was very kind.

After that, in Denmark, we were filling the gas in our car, and a lady came to me and asked, “Are you guys from India?” She was very excited. She goes, “Well, I have my little boy, and he would like to sit in your car, would you mind?” I said, no, of course not. He was only five years old, his name was Noah, and when he sat inside the car, he started clapping and then signed my car. His mom said to me, “Well, he’s a bit shy. He’s a special kid, too. He has a disability, and I’ve never seen him so happy in the past eight months.” I was just crying and crying and said, ‘Wow. There could be any reason—because of my turban, because of the left-hand steering, because of my car full of signatures—but if it can make a little boy happy, that’s the most memorable moment of my life. 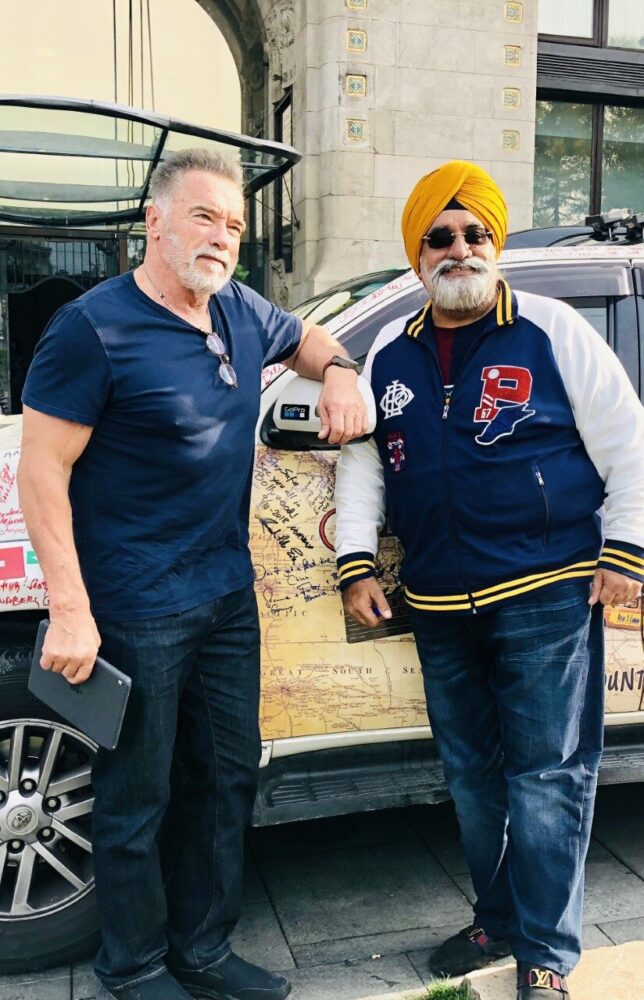 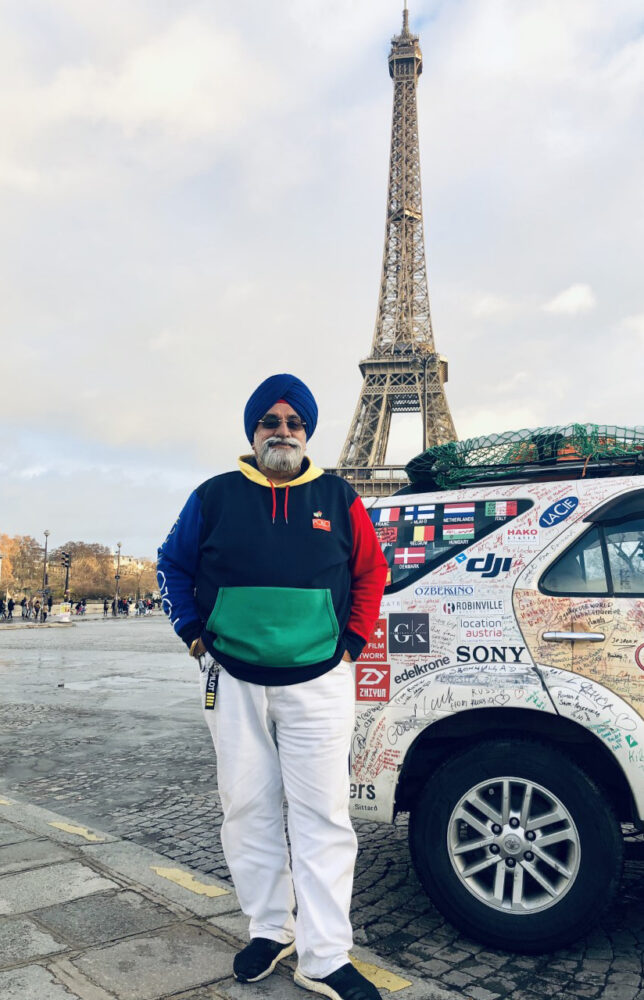 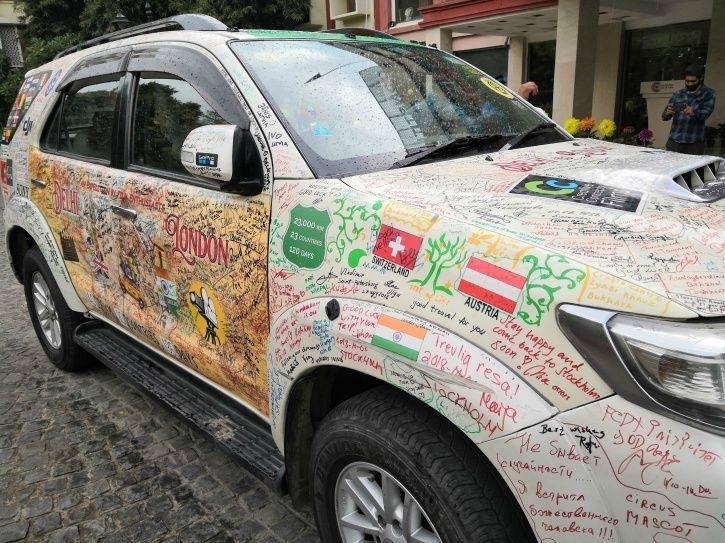 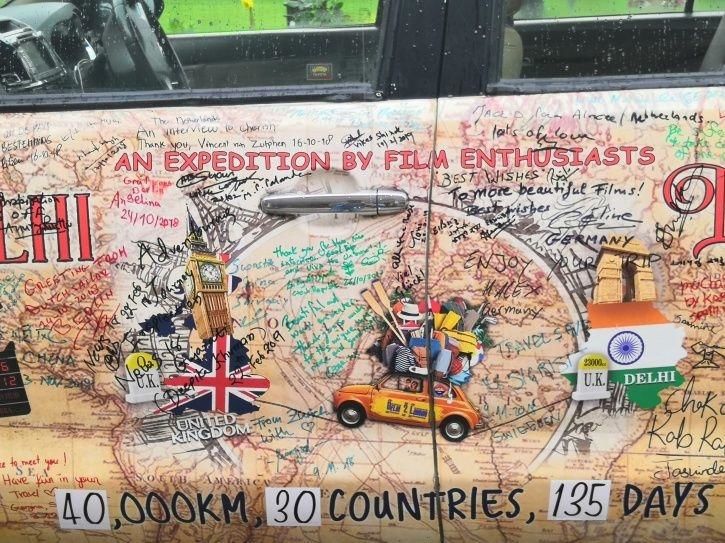 Tell me about your latest project, The Spiritual Journey of the Turban Traveller.

There were two spiritual journeys. I did the first one for the first Sikh guru, Guru Nanak dev Ji. He traveled 28 long years by foot, from India to Rome, including the Middle East and Sudan. I followed his footpath and the journey of 44,000 kilometers in India, all 29 states of India, and six neighboring countries, including Pakistan. We stayed in the gurdwaras, our holy places. There were no fancy hotels or guest houses. They serve free food for everyone there, and there’s a place to stay at most of them. Those places are sometimes good and sometimes bad. For eight months, my wife and I lived that life. That was an amazing trip. 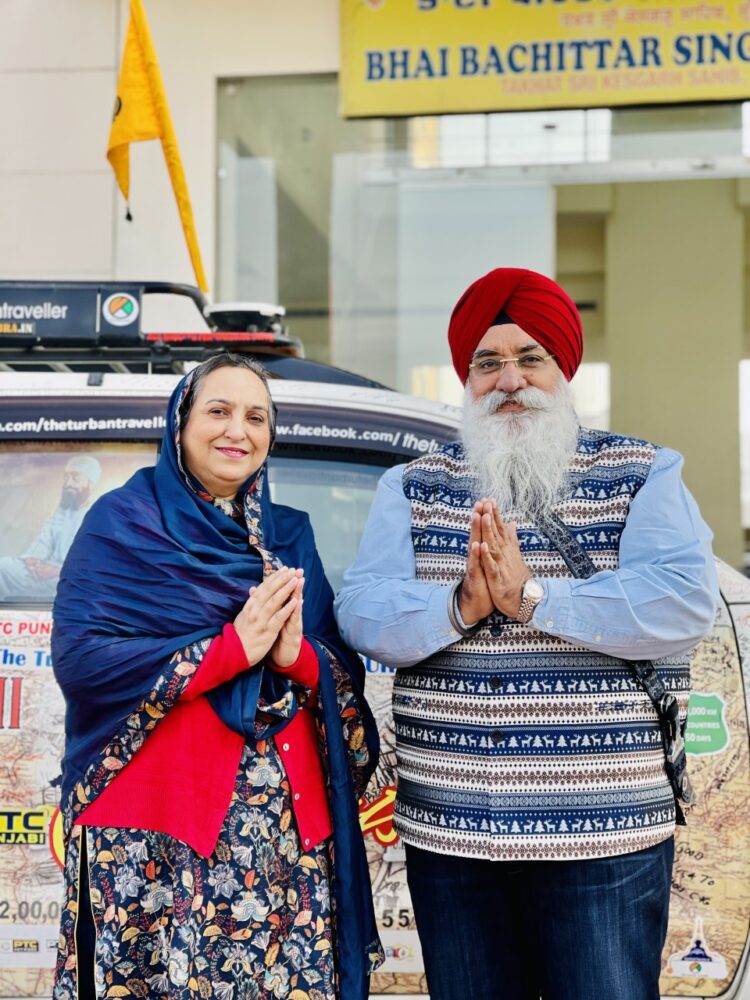 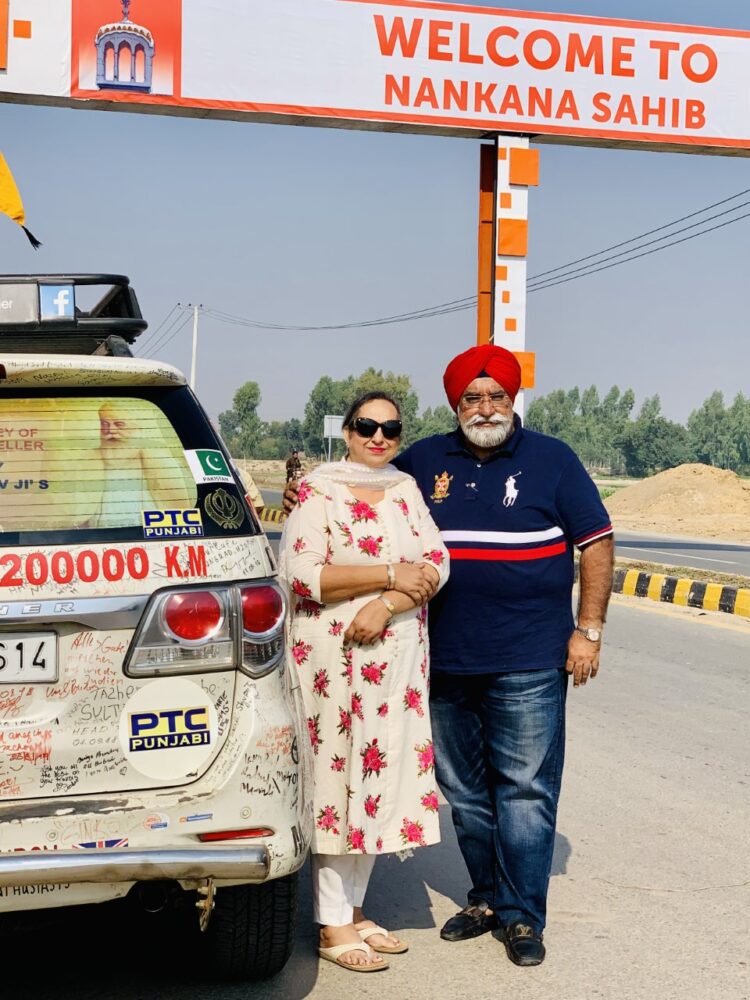 The Sikh religion has 10 gurus, and two of them traveled quite extensively. I did both of those guru’s journeys. The second was Guru Tegh Bahadur. This year he had a 400th birth anniversary, so on that occasion, I gave him a tribute and drove 29,000 kilometers in India, going to all the places where he had been. We made about 360 videos about the first and the ninth guru, and those were on a Punjabi television channel here. There are eight more gurus, so I will go on their journeys as well.

Did people ask you questions about the Sikh religion during your trip from Delhi to London?

People were curious. They said, ‘Who is this old man having a white beard with the multi-colored clothes, a hat on his head, and a car with so many signatures?” The first reaction of the people was, Wow. When they came near me, they asked, ‘Who are you, and why are you doing this?’ When I tell them that I’m coming from India, they ask, ‘How?’ because they feel that you can’t come from India through so many countries by road. The third question is, ‘Why? Why are you coming here?’ Then they get inspired that this man at this age is fulfilling his dream and traveling all around the world!

Then they ask about the hat that I am wearing on my head. I used to tell them this is our crown—our religious hat—or something like that. I tell them about our first guru and how he talked about humanity. Our religion is pretty simple—it’s about equality and humanity, all human beings are the same, and every religion needs to respect other religions. If you’re making $100, give $10 to other people. This is the teaching, and it’s all about humanity.

You are planning another trip in 2022. Where will it take you?

For my upcoming travels, I’m taking a caravan, and my wife is going to go with me. It will be fully stocked, so we’ll cook and sleep and eat while making a travel show. That trip will be from India to Paris via Pakistan, Afghanistan, Central Asia, Iraq, Iran, Georgia, the UAE, Qatar, and Saudi Arabia. My idea is to travel all over the world. That’s the plan. 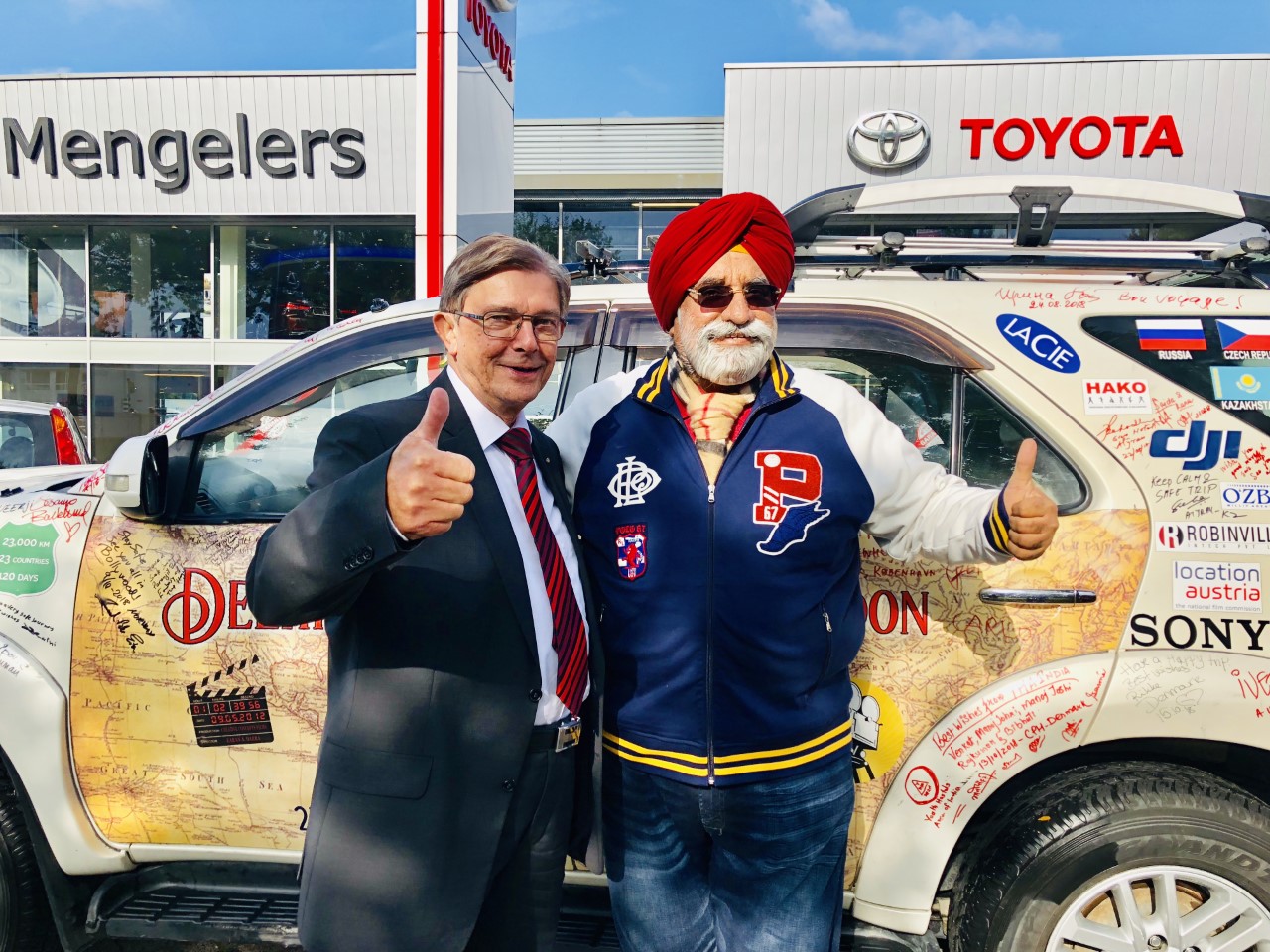