We left Germany some weeks ago, travelled through Eastern Europe to Russia, visited historical places, enjoyed the overwhelming hospitality of the Russians, and followed the vast open landscapes of Kazakhstan round the northern shore of the Caspian Sea. My girlfriend and I were on the road again with our 4WD—this time on the way to discover parts of the Silk Road and climb the “roof of the world,” the Pamir.

Shipwrecks in the Middle of a Desert

Mo’ynoq is the former port city in Qaraqalpaqstan, as the sub-republic here in northern Uzbekistan is called. During Soviet times this city was well known for its fishing fleet and fish factories. Today it is located in the middle of a desert, far away from the shores of the remaining lake and is home to only a few thousand inhabitants.

The Aral Sea area was the victim of a human-driven ecological disaster after large amounts of water was diverted and utilized for cotton production. A few shipwrecks are rotting in the sand near the port—like some bizarre and frightening warning. The extent of the disaster becomes even more clear when we looked at the information panels, which graphically document the decline of the lake. But Mo’ynoq does not look hopeless. The people living here seem to make the best out of it. We even find a small restaurant serving delicious fish for lunchtime. A memory of bygone days?

Oriental Flair in the Ancient Oasis City of Xiva

After traveling mainly through desert landscapes for the last weeks, we were drawn toward the oasis cities along the way. Xiva was strategically located on the route between Europe and India. Hundreds of years ago it was an important trading city and resting place for the caravans. The old town, Ichon Qal’a, which has been repeatedly attacked, destroyed, and rebuilt over the centuries, is surrounded by a high wall—today it looks like a large museum, and became a UNESCO World Heritage Site in 1990. The visitor enters the old town through a huge gate and thus another world. We were thrilled by the masterpieces of Oriental architecture. Here we can well imagine that the caravans stopped in the oasis after weeks of hiking through the desert and steppe.

There are more archaeological sites in Uzbekistan, the remnants of the ancient Khorezmian cities in this large oasis, which is bound on the north by the remaining Aral Sea, the deserts Kyzylkum and Karakum, and a steppe-like plateau. Walking across the dusty, sandy ground at the former fortresses of Toprak-Kala and Ayaz-Kala, it was easy to consider how it might have looked back then, more than 1,000 years ago when the area was still inhabited.

As we made our way through the desert to Bukhara, the region had already been hit by the first heat wave of the year. Like Xiva, Bukhara is a UNESCO World Heritage Site with many fascinating structures. The Samanid Mausoleum, located west of the old town, is probably the oldest preserved building in Central Asia and also the center of the ancient city of Bukhara.

The Amazing City of Samarkand

Samarkand—the name itself sounds like a fairy tale. The city was founded long before Christ and prospered through trade along the Silk Road. Over the centuries, it was repeatedly the victim of conquest and destruction and was finally rebuilt in the 14th century under its current name. The Central Asian conqueror Timur Leng made the city the capital of his empire and transformed it into one of the most important cities of that time.

Even today, we can enjoy the masterpieces of Oriental architecture and art in Samarkand. These old cities with their turquoise and blue dome buildings and mosaic-decorated structures are so beautiful to look at. 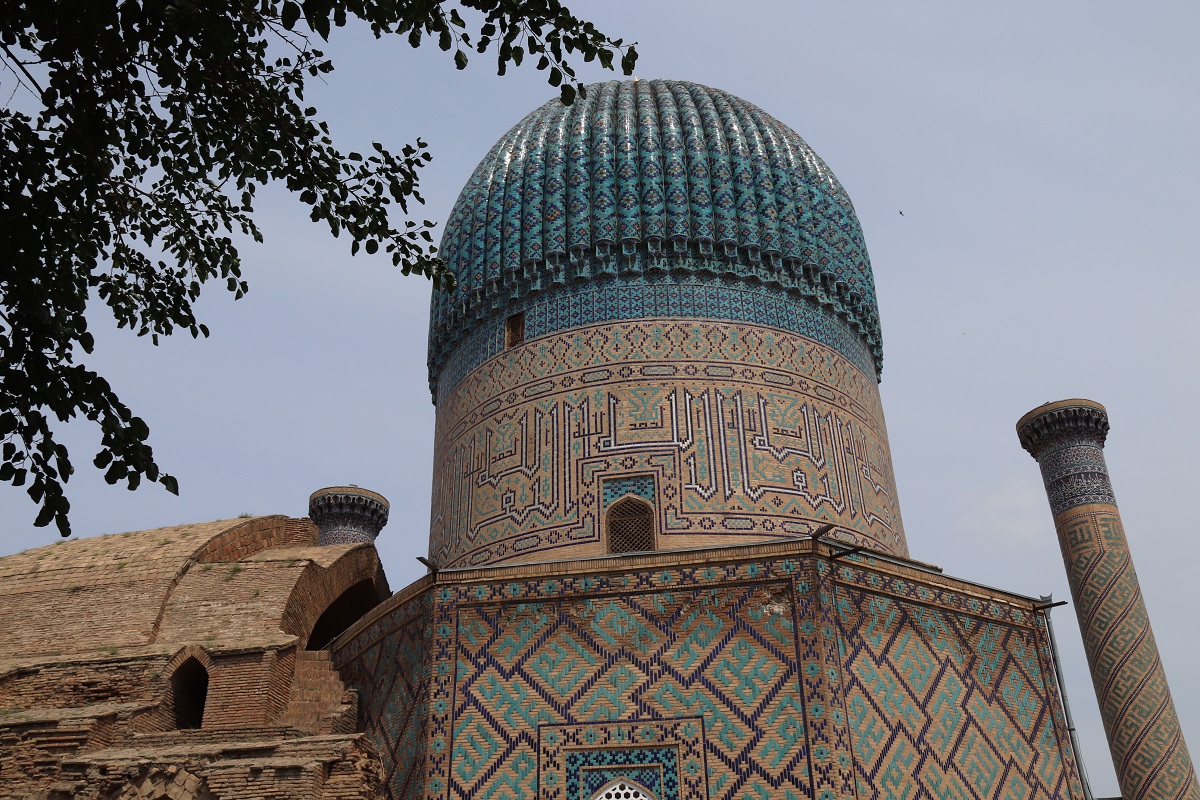 From Amazing Cities in Uzbekistan to the Nature of Tajikistan

After Samarkand, we headed for the 70-kilometer road to the border with Tajikistan, which marks the seventh border crossing since the beginning of our journey.

Through the Tunnel of Death

The approximately 5-kilometer-long Tunnel of Death, the Anzob Tunnel is actually smoothly asphalted and dimly lit, at least half of it. A ventilation system that could provide fresh air is still not in place. So passing this tunnel remains a little adventure.

From a distance, we could already see the huge flagpole on which a Tajikistan flag of gigantic proportion flew above the city. We spent the days in Dushanbe with walks through the city, along the Rudaki Boulevard, and in the Victory Park above the city. Camping in the yard of our good-natured host was almost like heaven because the cherries and apricots were ripe and we could pick the delicious fruits directly from the tree.

A Little “Thank You” for the Great Hospitality

Part of the M41 road is named the Pamir Highway. This is the main connecting route through the East-Tajik mountain region Gorno–Badakhshan Autonomous Oblast (GBAO), for which a permit is required. This permit is regularly checked at various checkpoints along the route. While driving and enjoying the scenery, a minibus came into sight, standing alongside the road. The driver was waving a towing rope and asked if we could haul him up the hill so he could roll the vehicle downhill to get it started. Of course, we were happy to help. His gratitude was great, and so we were invited to tea and biscuits. 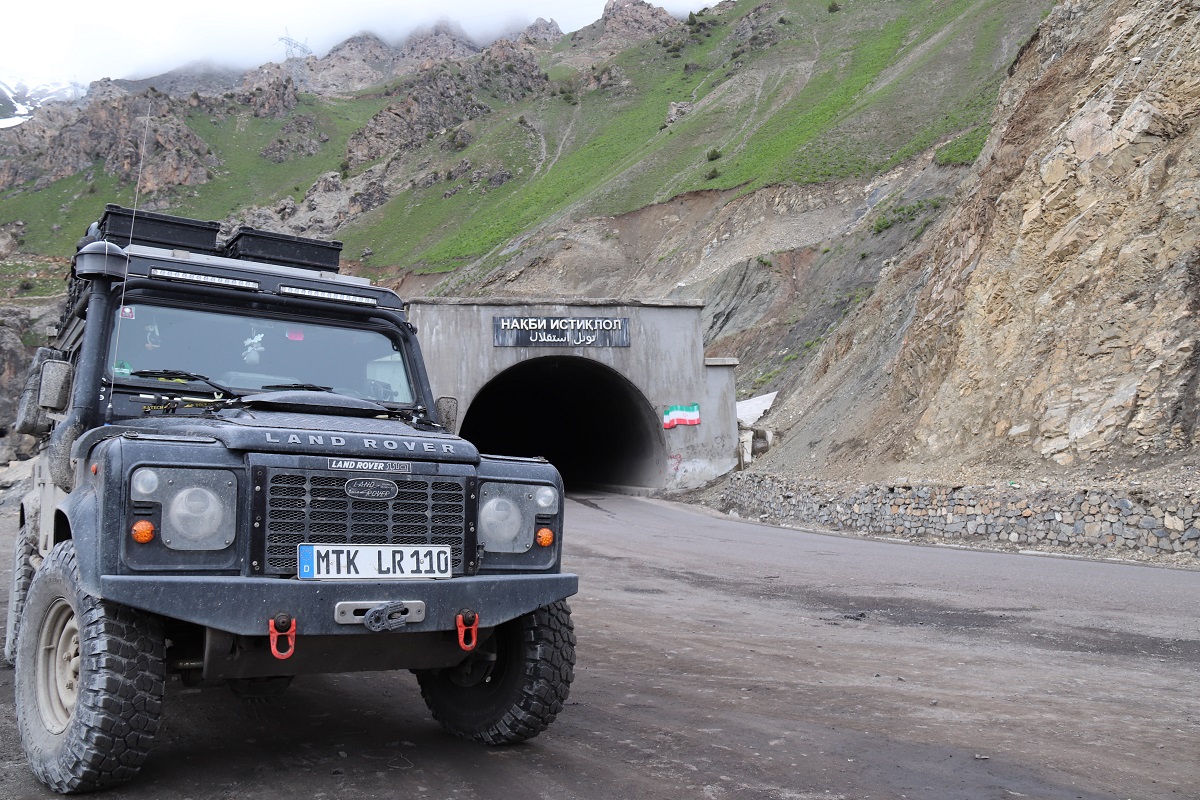 Climbing the Roof of the World

Khorog, the capital of the province, is a pleasant place to stay for a few days and also a good place to fill up fuel and water and stock up on food before moving on to the more remote regions in the mountains. From here, the southern route follows along the Wakhan Corridor and the Panj River which marks the border between Tajikistan and Afghanistan. The dusty road along the Wakhan Valley offers breathtaking mountain scenery. 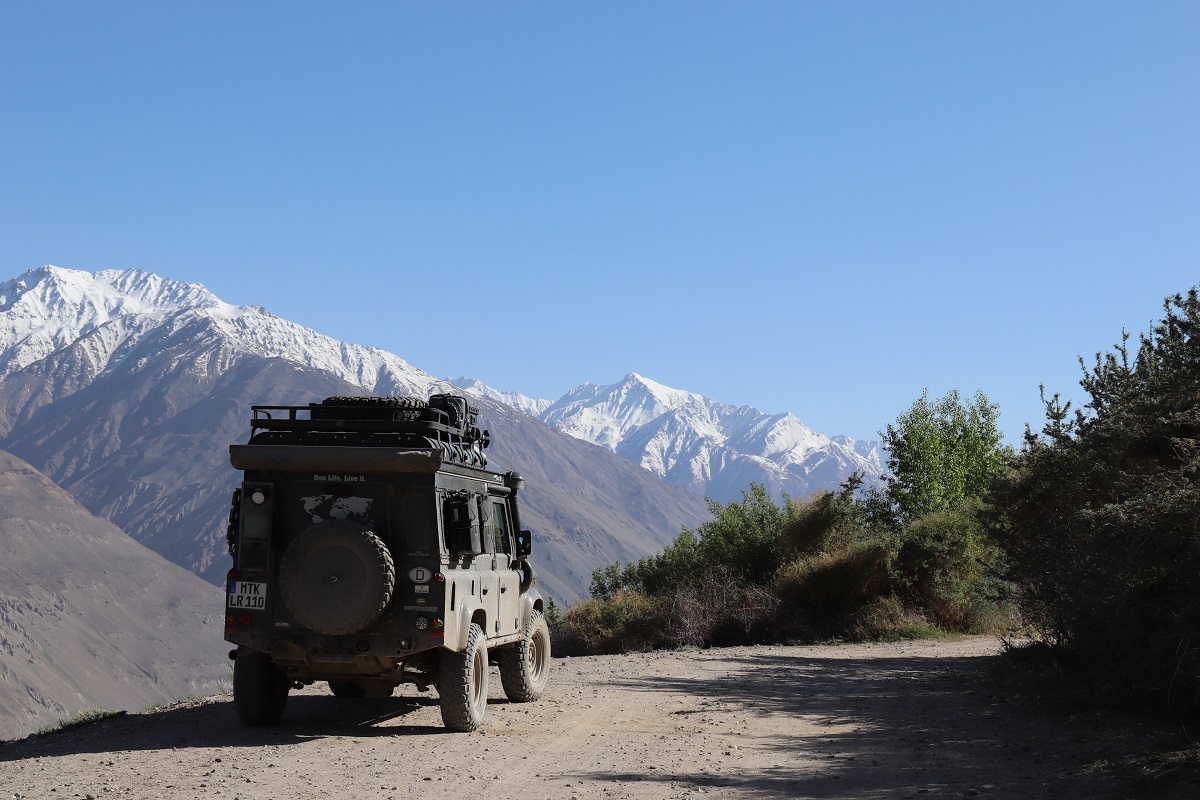 We decide to take a detour through a small valley. There are two ways to get from the main road onto the track: crossing through the river or driving over an old bridge. The way through the river seems to be too tricky due to the strength of the current and the water depth while being with only one vehicle. The bridge has seen better days, and some planks are missing, so that we can see the heavily flowing river underneath. However, it still makes a sufficient solid impression. So we replace the missing planks with sand ladders and make our way safely over the bridge. 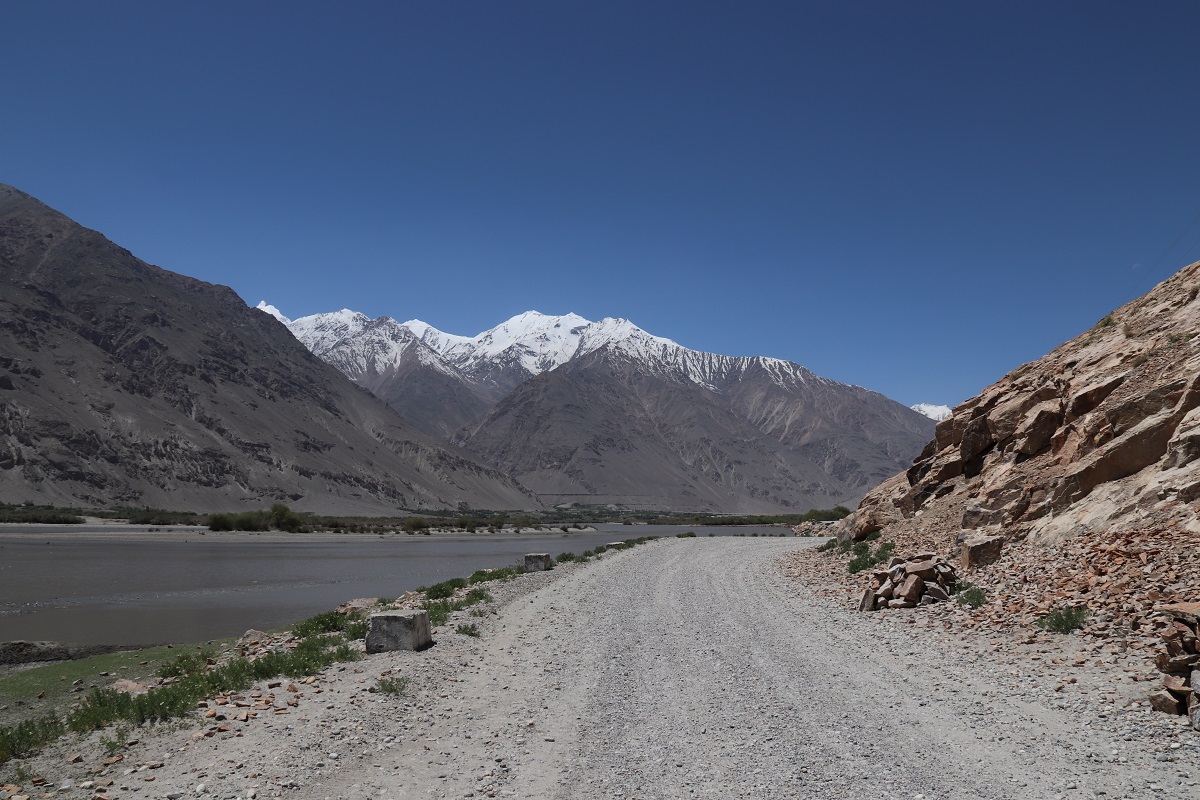 After passing the bridge, we followed the track for exactly 1 kilometer, before I successfully managed to maneuver the Landy into a 10 x 10-meter large piece of deep mud. Even after many years of overlanding and off-road experiences, sometimes there are these (fortunately rare) moments, where you ask yourself, “Why did I drive along here?” Normally, I always walk such sections before driving. But this time, I thought we would have easily made it with enough speed. Well, that’s how good stories are created for chats around the campfire. But we are not that far yet—we are absolutely stuck. For a good hour, we shoveled, hauled in rocks, and set sand ladders, but there was nothing to be done. This is all very exhausting at a 4,000-meter elevation, and would not have taken five minutes using the winch, but since there was no tree, we had to seek alternatives. We rolled the spare wheel into a small creek that had washed out the stony ground a little and blocked it with heavy stones to create an anchor point for the winch. Not a solid one, as it is not possible to dig deep into the rocky underground, but a good plan. Fully locked, sand ladders, and a little pull with the winch—I started to spool the winch rope, it slowly tightened, and success, the truck was free. 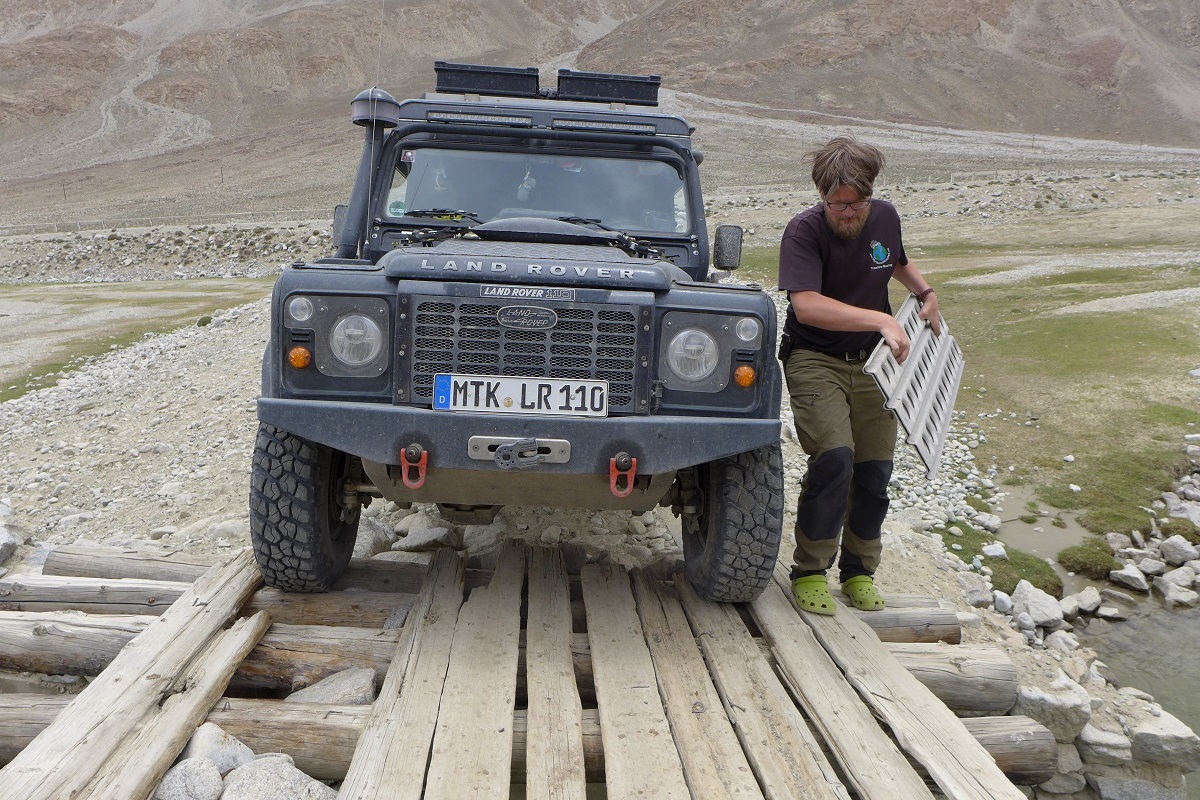 Through the desert-like plateau, we continued to climb until reaching Murghab. The village only has a few thousand inhabitants and offers good supply options in the local bazaar. It sits a little lower at about a 3,600-meter elevation within the high mountain landscape. Fortunately, we were completely untouched by symptoms of elevation sickness, and the Landy was still going strong at the high elevation.

In the village, there was no continuous electricity nor fluent water supply, but we had one of the best dinners of the whole trip through the Pamir. Hot water for the shower was prepared for us over a fire. Leaving the city, we received a freshly baked loaf of bread as a farewell gift. Again, an act of enormous generosity from the people living in this harsh environment. 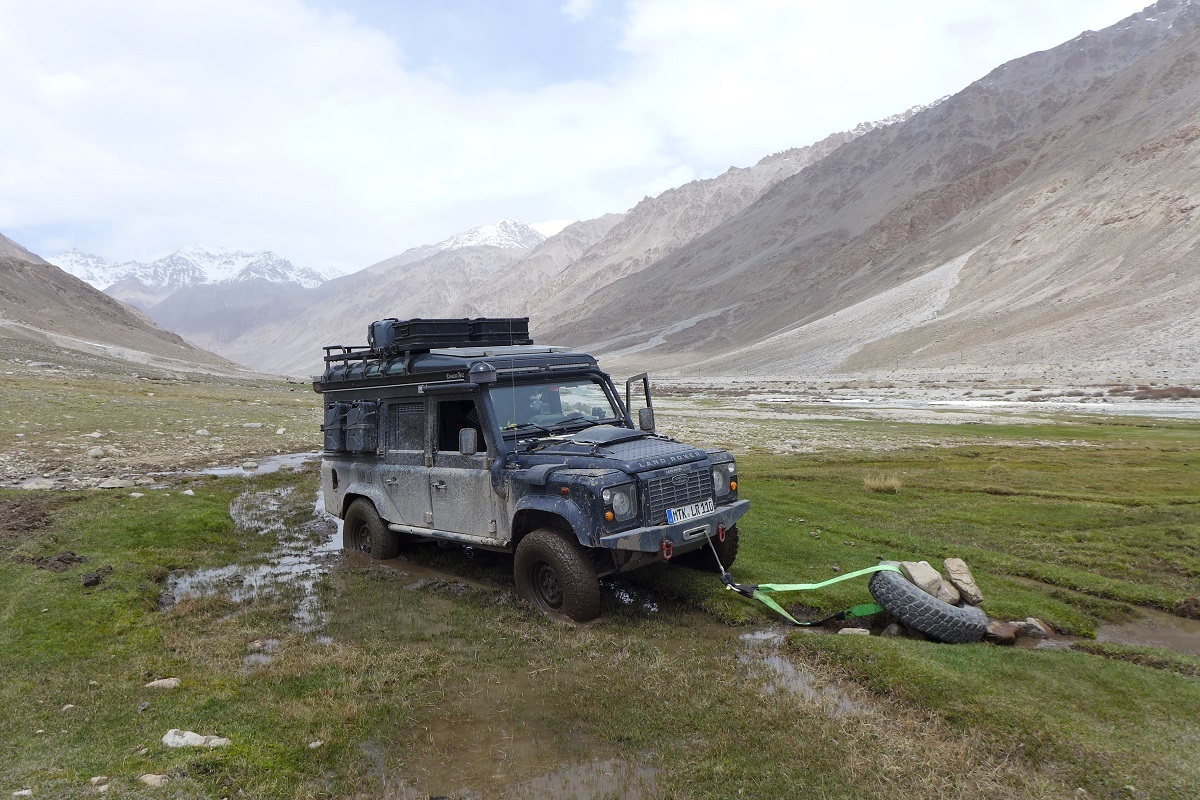 Following in a northern direction, the “Pass of the Passes,” the highest pass on the Pamir Highway awaited us, the Ak-Baital Pass at 4,665 meters. Once on top, it was hard to believe the elevation number on the display of the GPS device. 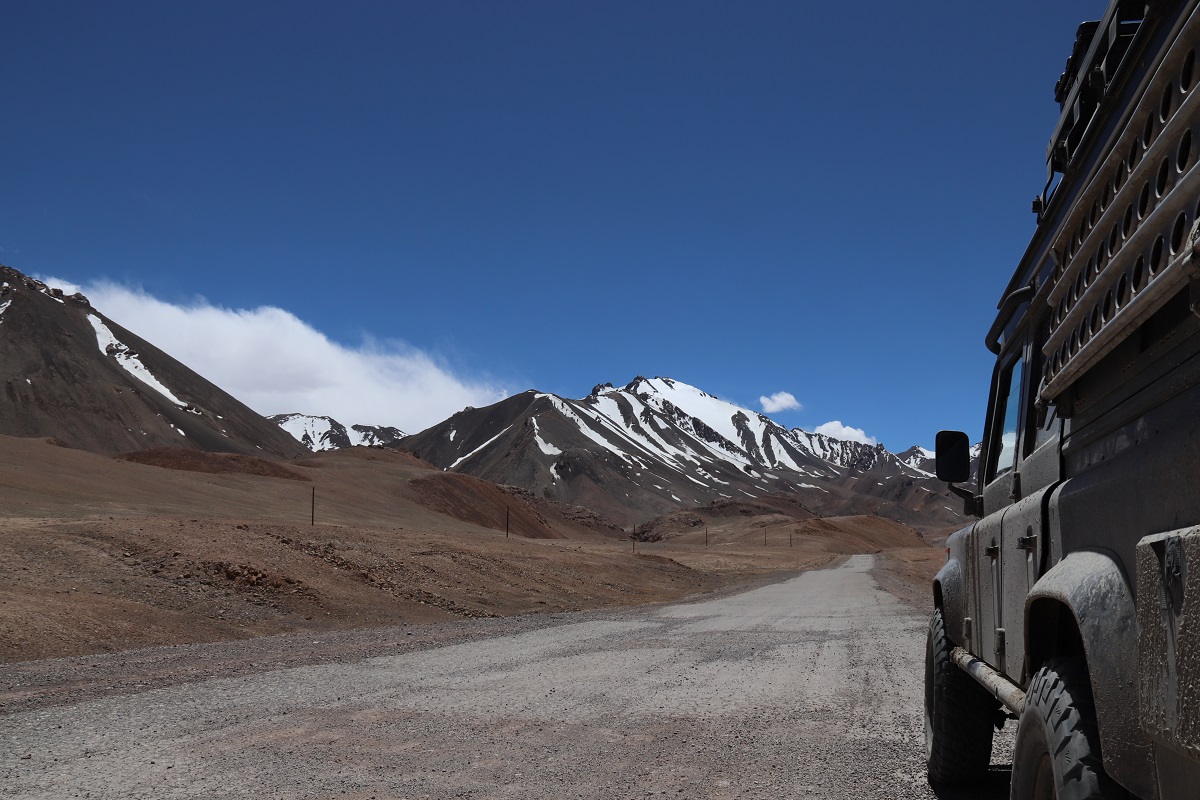 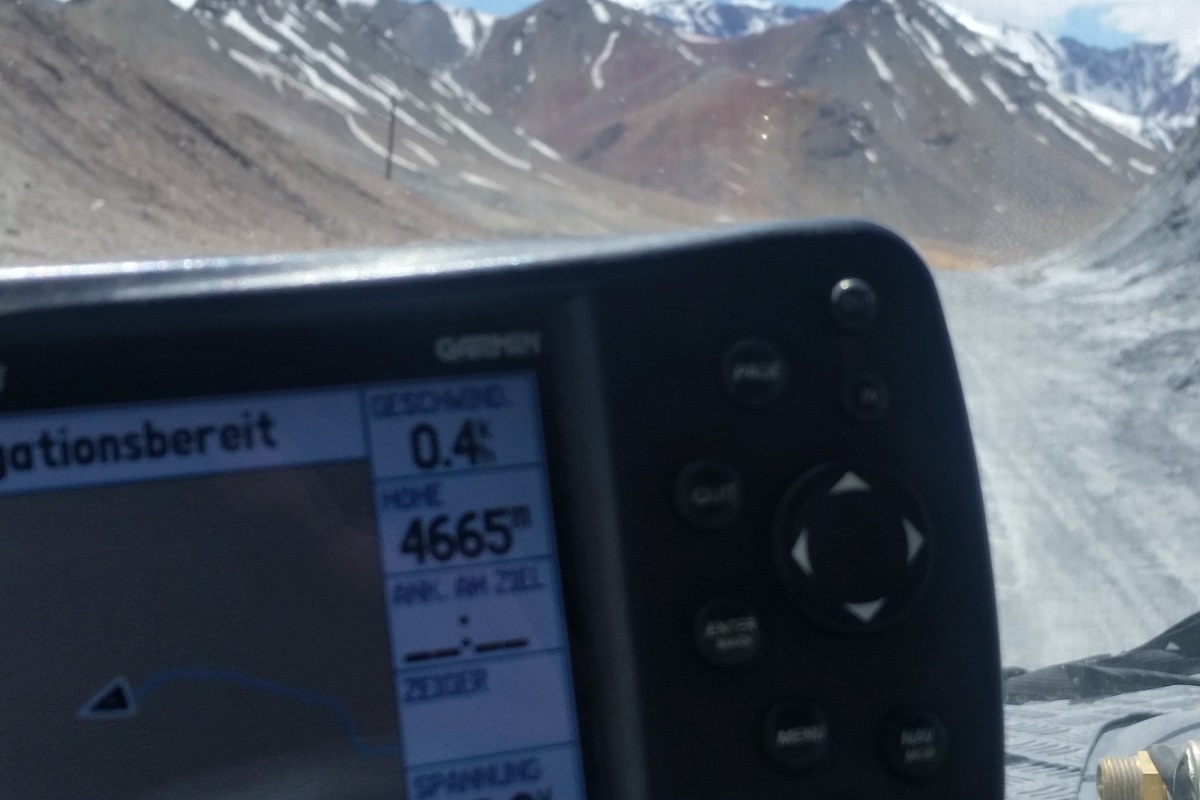 After a cold night with a stunning starry sky on the shores of the Karakul Lake, we followed the last few kilometers to the border to Kyrgyzstan.

The border is located at 4,282 meters on top of Kyzylart Pass. The customs officer released us with a friendly “Greetings to Germany!”

Bjoern is an overlander and adventurer since birth and grew up camping and traveling with his parents. Later, the journeys became longer, to more remote, challenging places on Earth. After studying and working successfully in finance and risk management for several years, it was time to give working life a change. He now focuses on his true passions for vehicle-supported overland travel, outdoor exploration, outdoor adventures, and doing what fuels his fire most.