Mirny is a city as isolated in the middle of the Russian expanse as many others in the far east of the country. But it has a strong reason to exist in that place: 25 percent of the diamonds which circulate the world come from its mine, an open pit 525 meters deep and 1.25 kilometers in diameter, one of the largest ever excavated by man. From there, in the direction of Lake Baikal, we would have to be self-sufficient over a stretch of more than 1,000 kilometers—our second winter road was ahead. We were concerned that because it was already spring, the ice, which makes this kind of road passable, would start to melt. I asked a truck driver for information at a gas station, and he said: “нормальный” (normal’nyy), that means “normal.” Normal only if it’s for him. 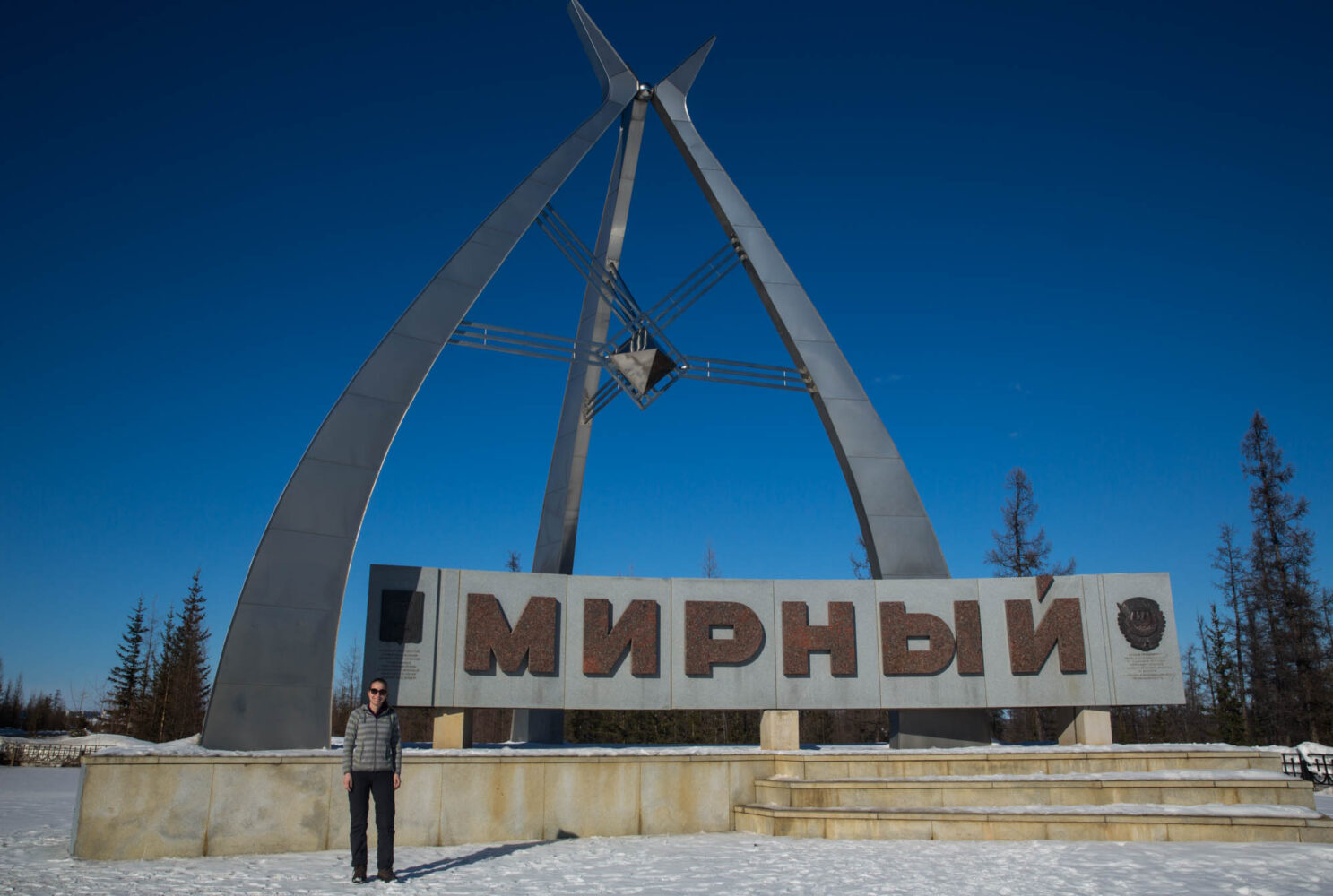 Mirny, an oasis in the middle of vast Siberia, was our last infrastructure point. As soon as we arrived in the city, we stocked up on groceries, filled up the fuel and water tanks, and got information about the challenges ahead. For us, Mirny was the beginning of another great adventure, the beginning of our second winter road in Russia. 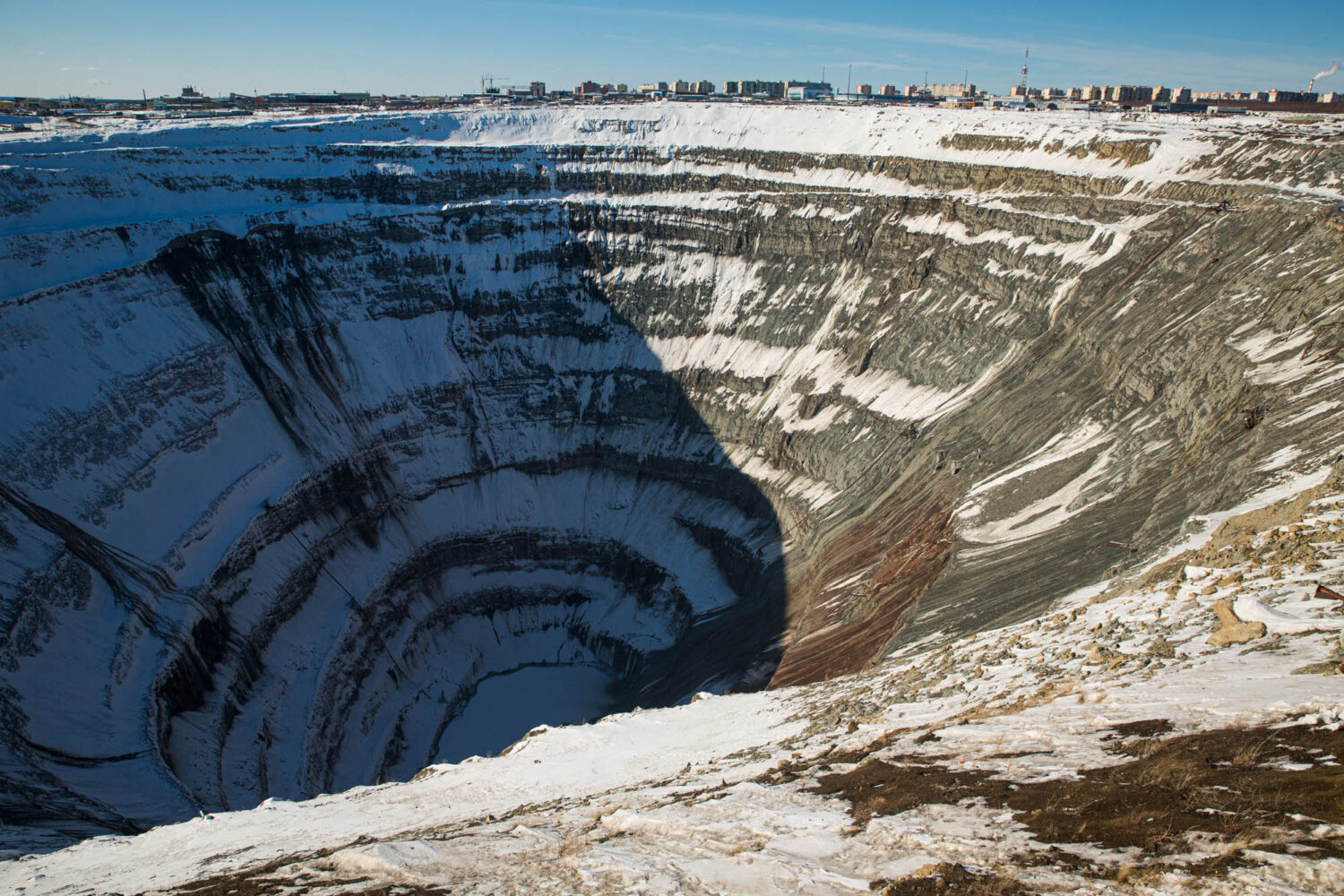 Mirny’s open mine scares anyone who approaches its edges, especially when comparing it with the proportion of the city in the background. It is unbelievable to think that such an immense hole was dug by humans and that shiny diamonds came out of it. Today all the extraction work is underground, with activities taking place up to 1.2 kilometers deep.

The road that connects Mirny to Ust-Kut is known as “forest road,” as it crosses, for the most part, the taiga. Along the way, we came across all types of trucks in big quantities. And for that, we registered our admiration for Russian drivers because we were driving a 3-ton 4WD vehicle while they traveled with trucks of up to 30 tons. We covered the route in five days; the trucks usually take 8, 10, or 12 days, depending on the road conditions. They go, return, go, return, until the gates close naturally with the arrival of the heat. 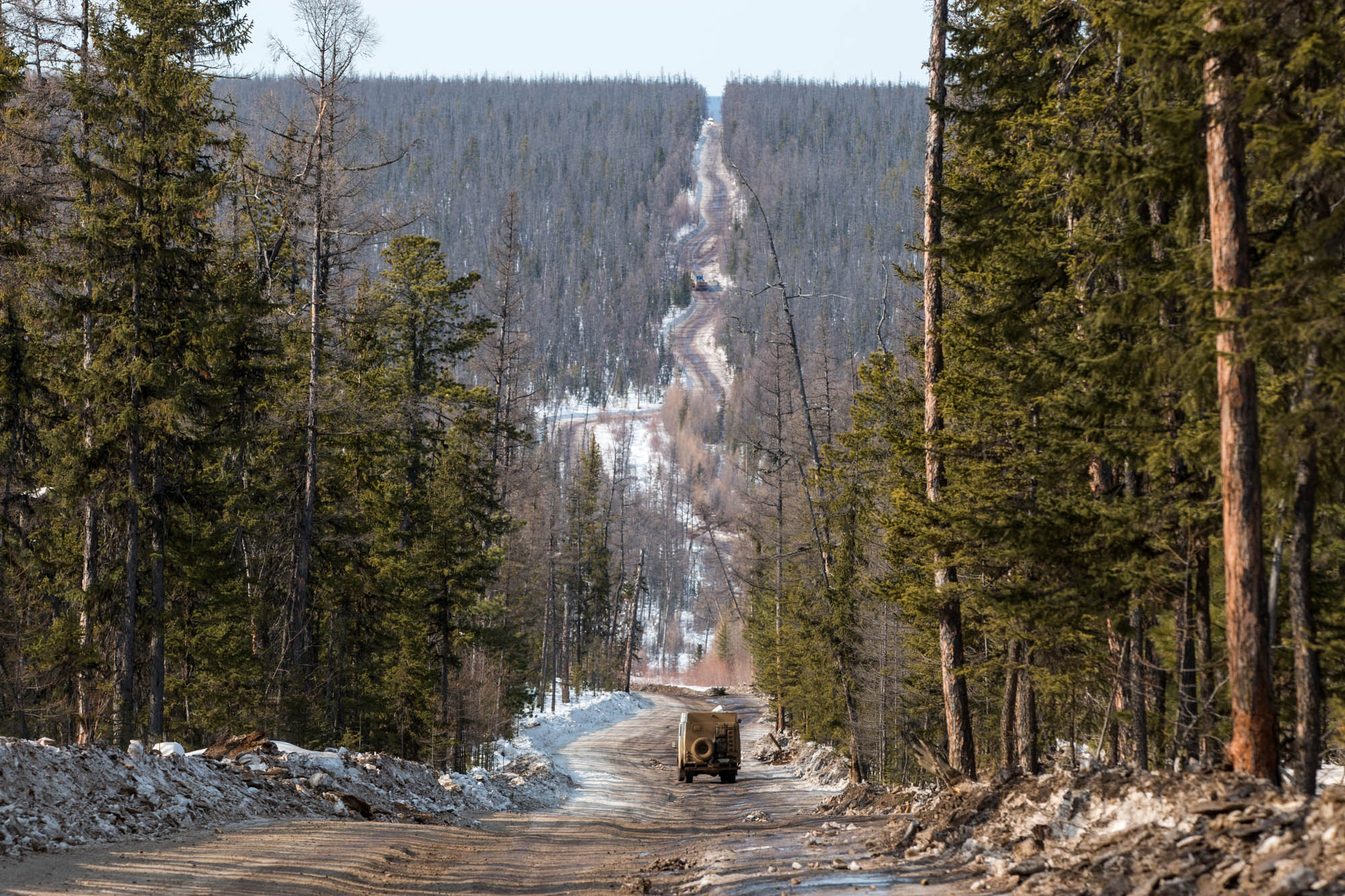 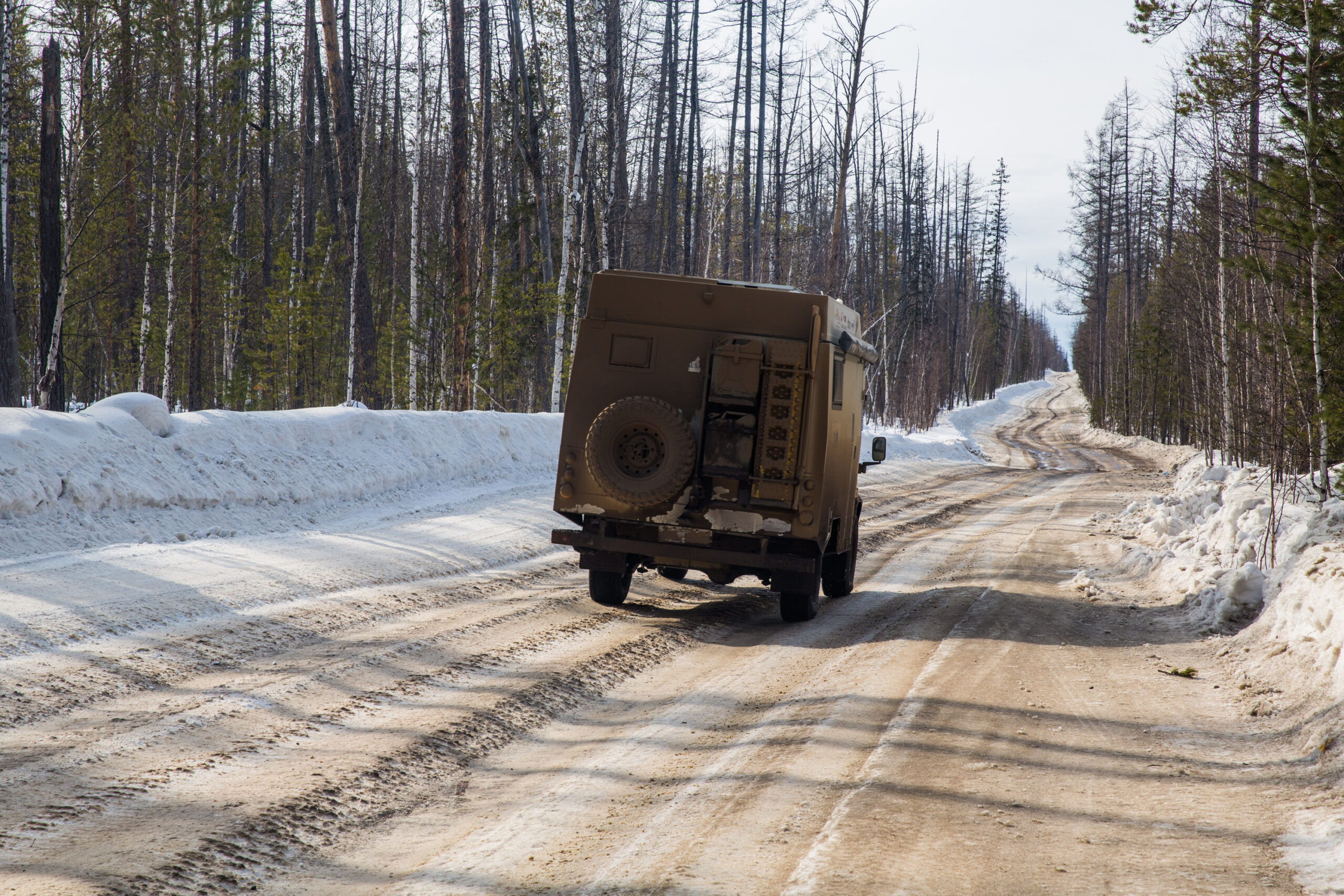 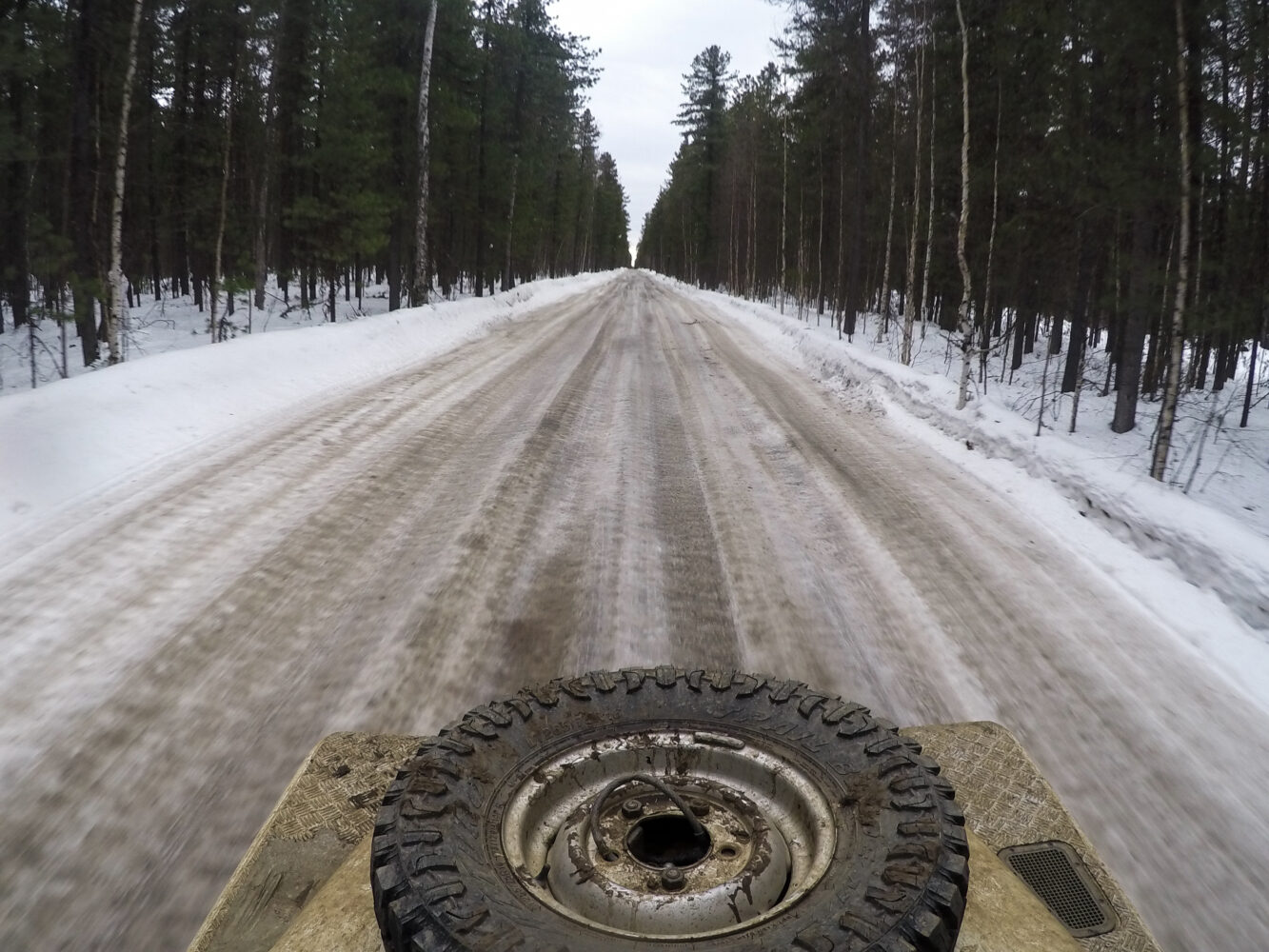 The road that connects Mirny to Ust-Kut is known as the Forest Road as it crosses, for the most part, the taiga. At first glance, it looks like a flat, empty and monotonous region, but it is from this region that much of Russia’s wealth comes from. 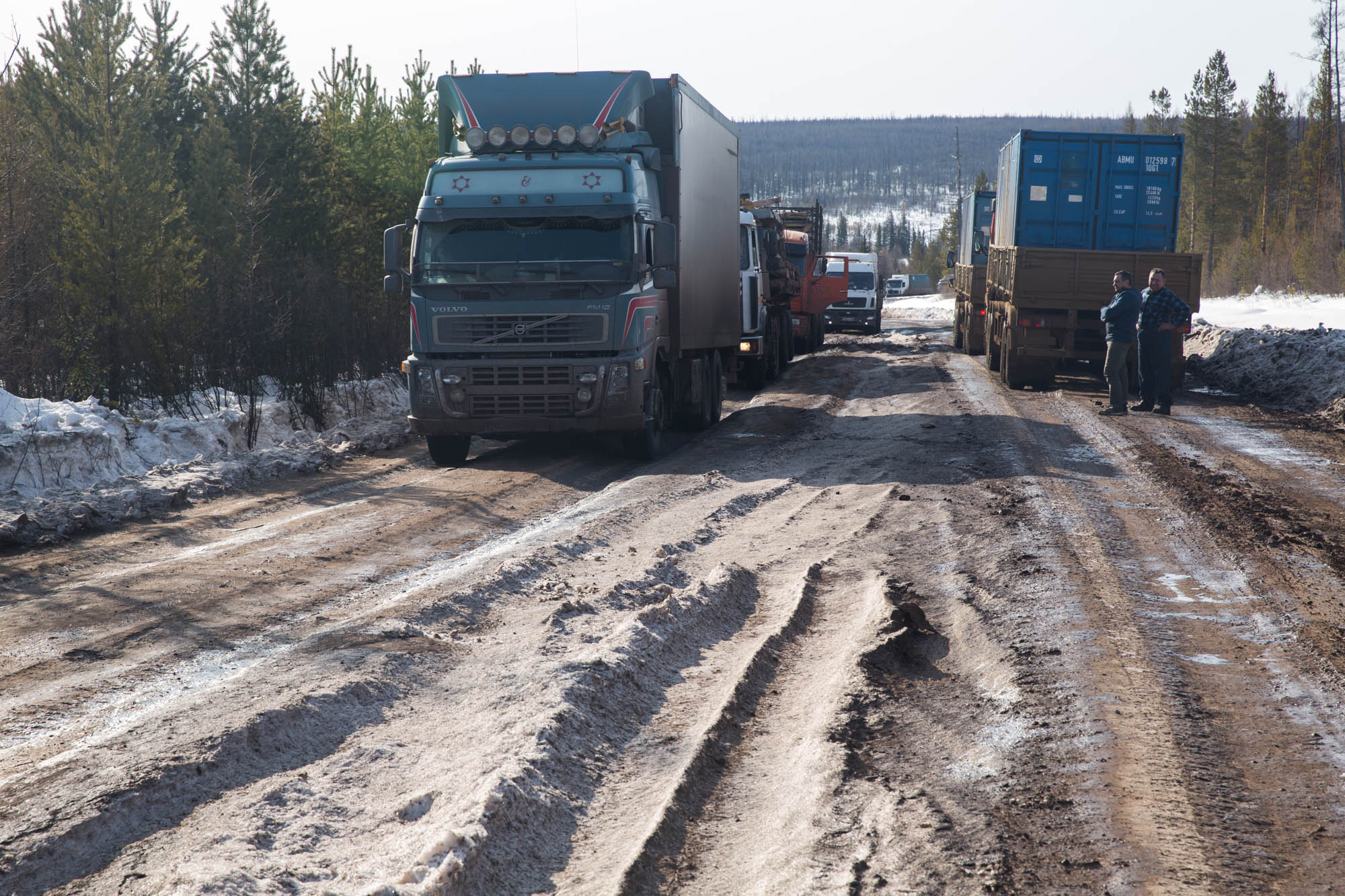 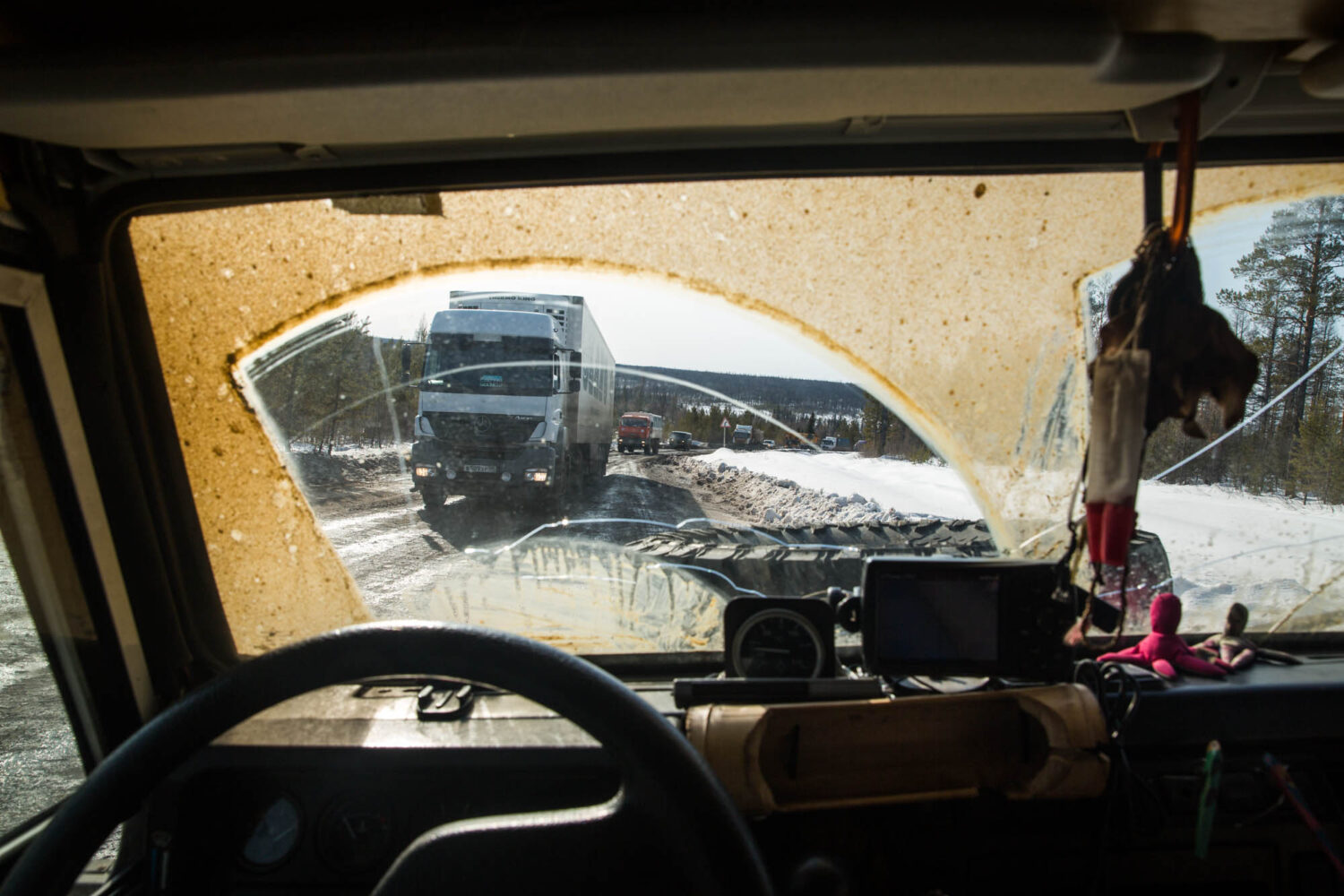 Along the way, we came across many trucks—hundreds of them. The reason for all that movement is due to the fact that this region is very rich in gas, oil, and wood. Ust-Kut, the city in which the winter road ends, is one of the main outlets for these natural resources, which leave via the port on the Lena River or by rail.

When they were lined up, it meant that we were approaching a critical stretch. This happens at this time of year when the temperature rises above 0°C during the day, and the surface melts. The track is so slippery that you can barely stand on your feet. Traffic jams occur in the narrow parts of the road and on uphill and downhill slopes. In addition to the small width for the passage of two vehicles, there is another complicating factor: they all pass through the central track when there is no other in the opposite direction; the sides of the road are higher compared to the center. Because the ice is so slippery, vehicles slide to the center of the road, even at minimum speed, making it difficult for two trucks to cross in opposite directions. Sometimes they hit and get stuck to each other in the middle of the road. 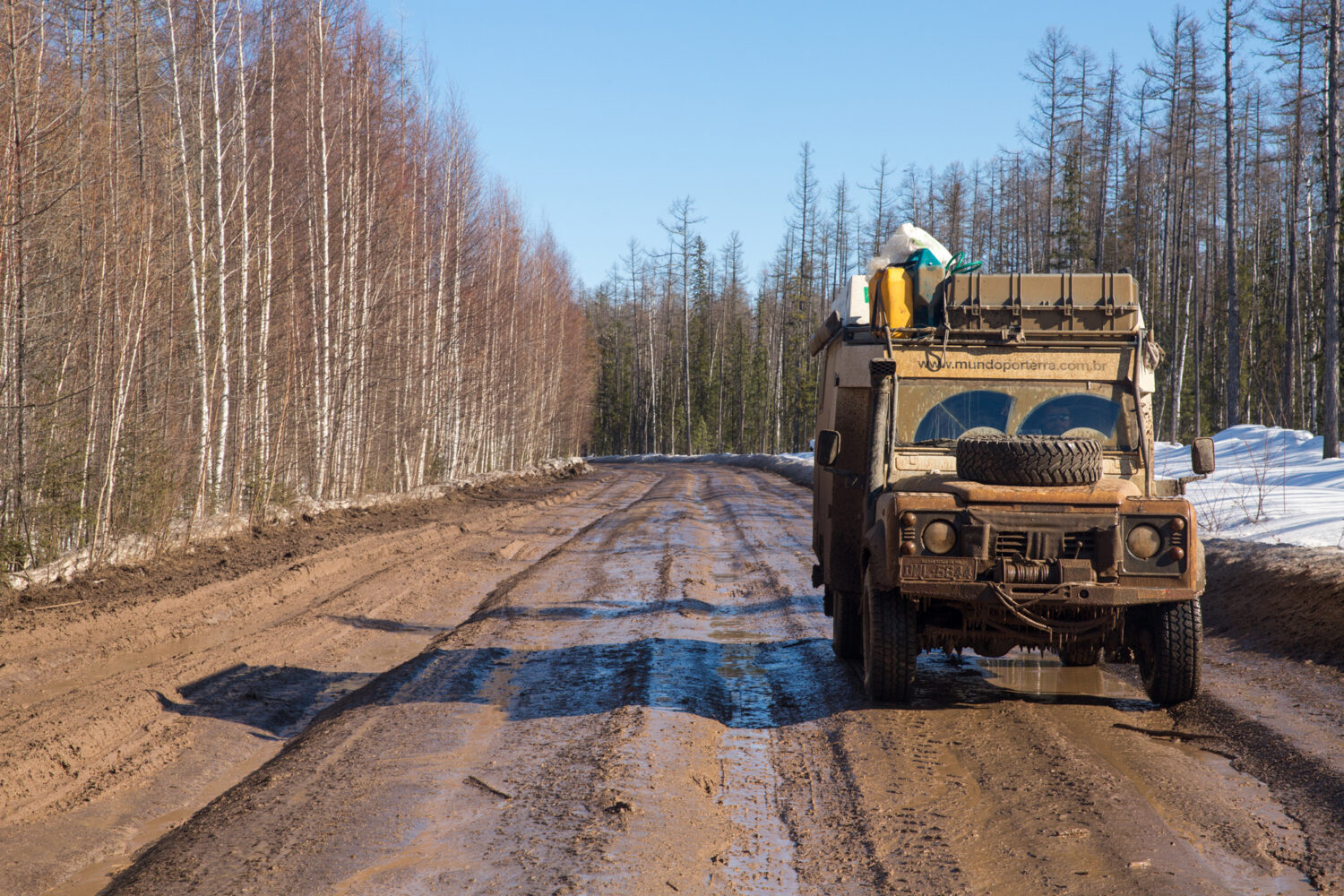 As it was already spring, with temperatures above 0° during the day, the superficial ice started to melt, and a sticky mud took its place on the surface of the road. 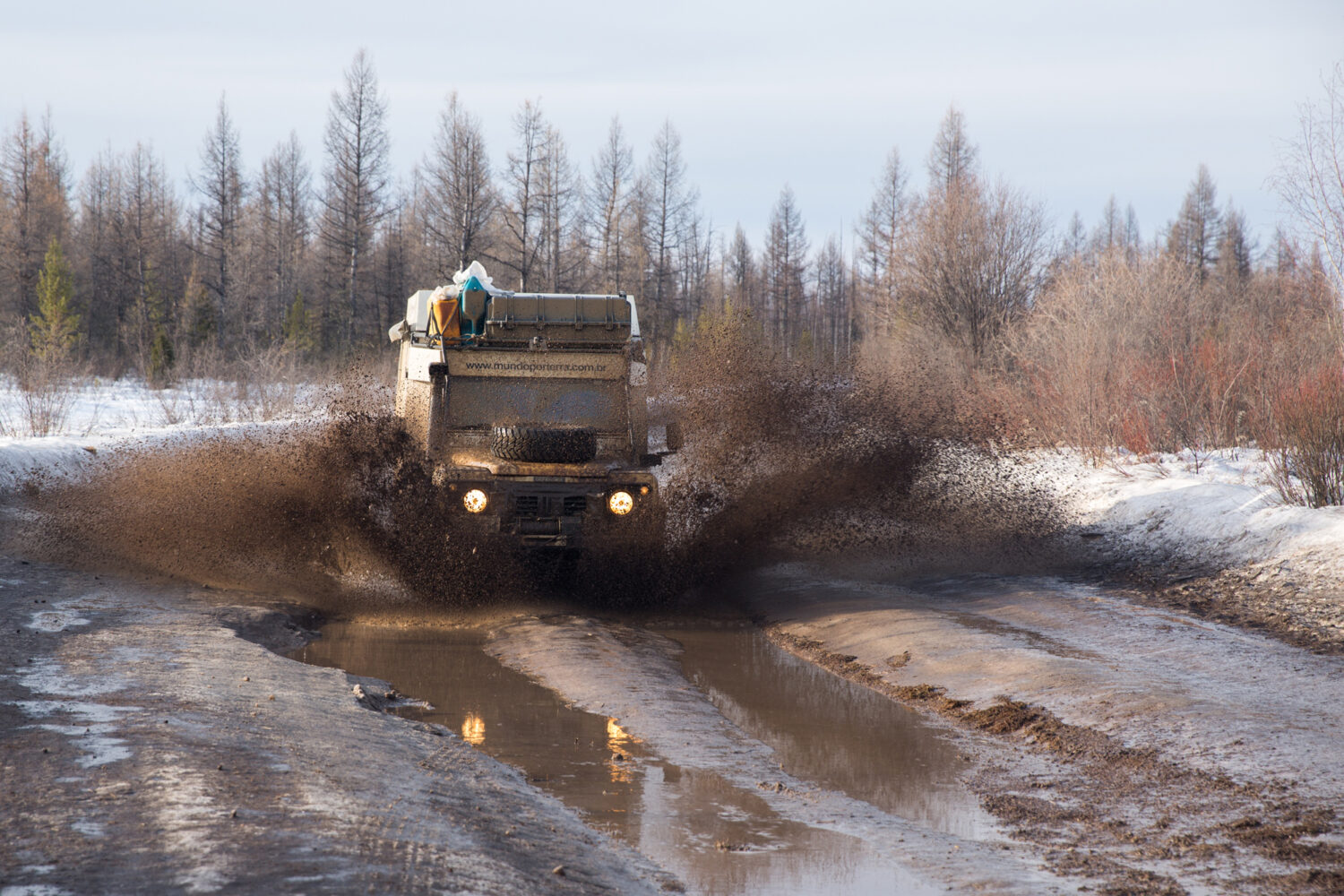 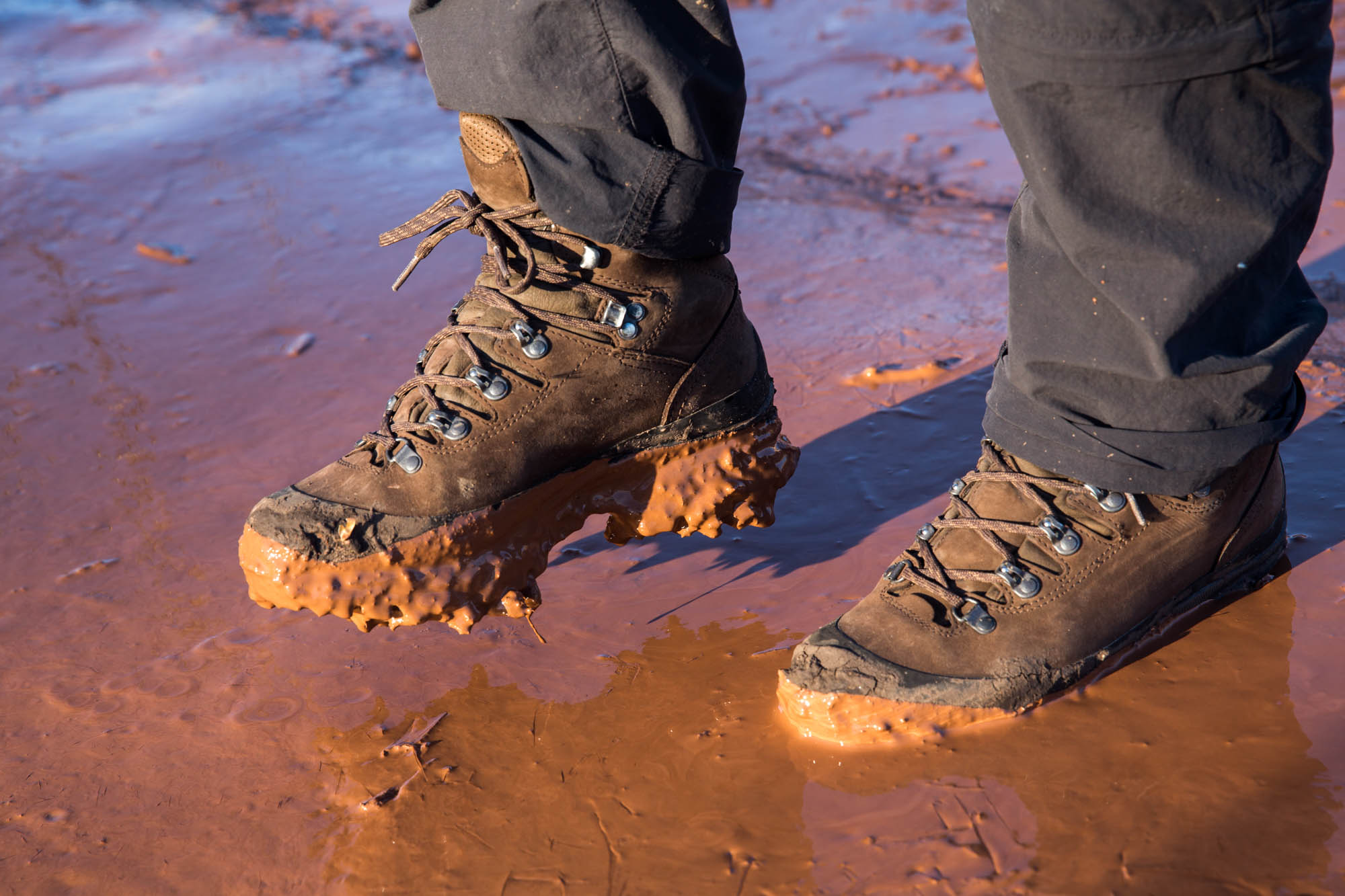 The road was so slippery that we could barely stand on our feet. In one stretch, we skidded with the car and rotated 180° so quickly that we even got confused as to the direction we were driving. It would have been dangerous if the wheels were chocked in some ditch, and it could easily make our car topple over. 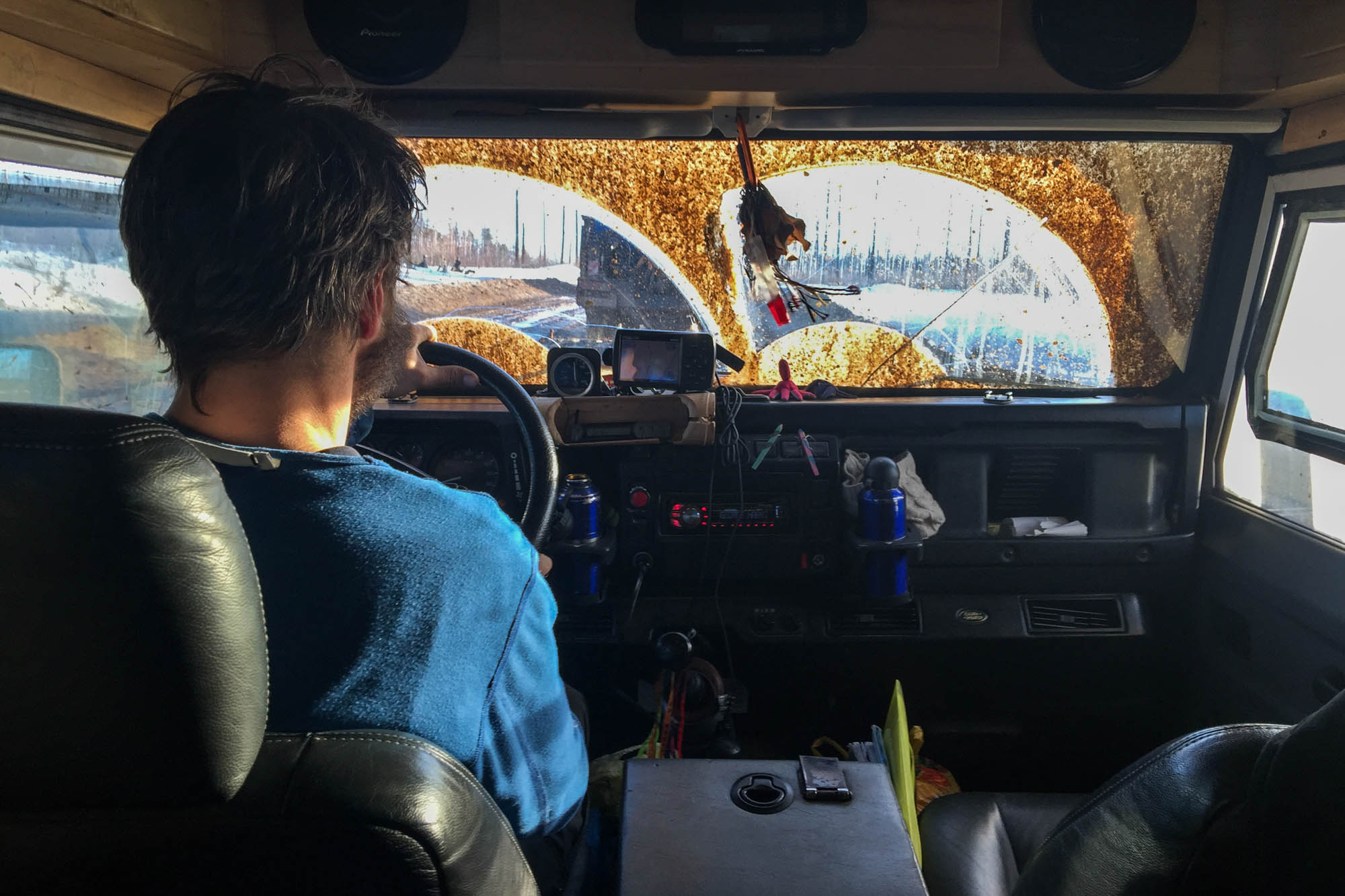 More than 1,000 kilometers were driven in these conditions at an extremely low speed, and it took us five days to overcome it. 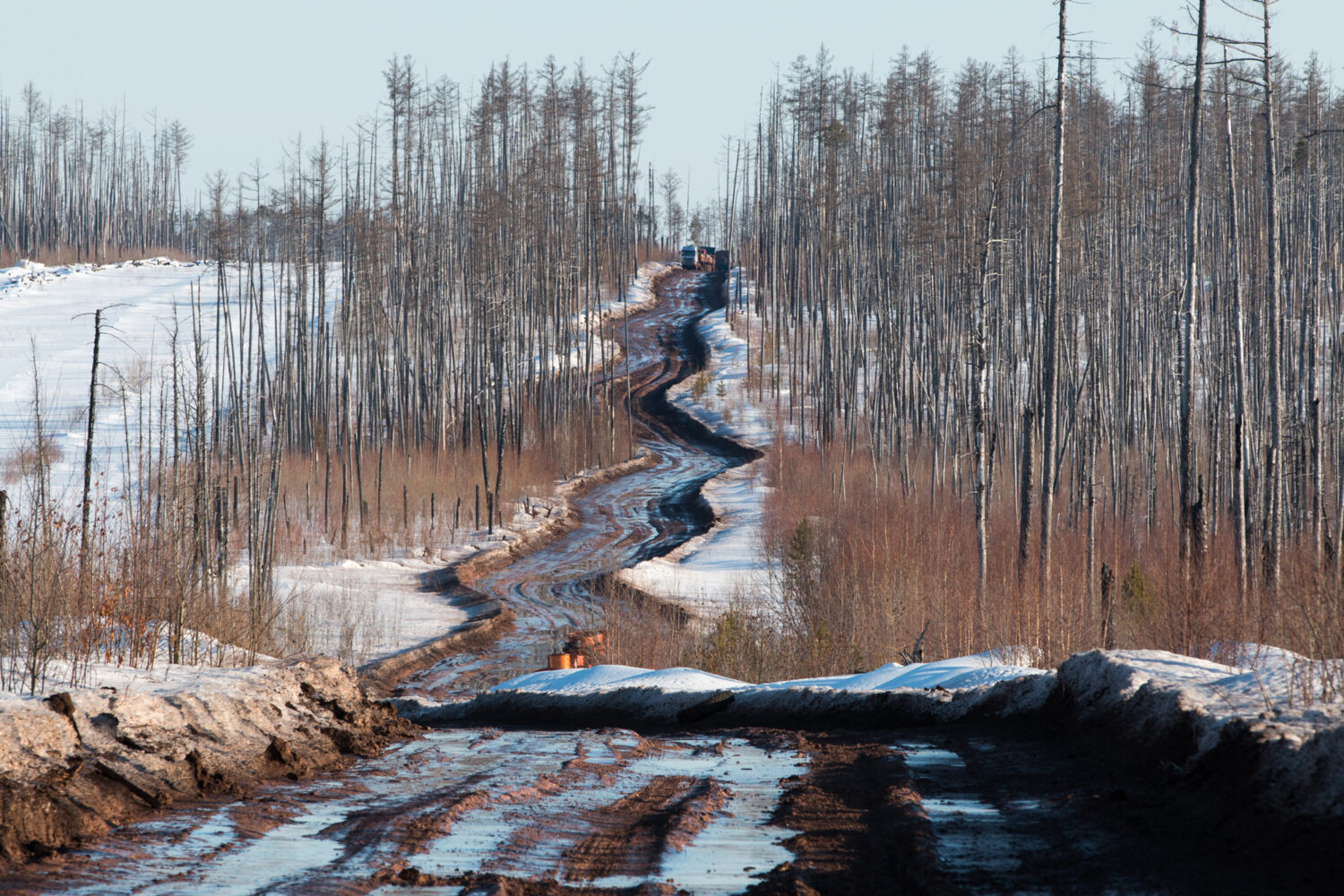 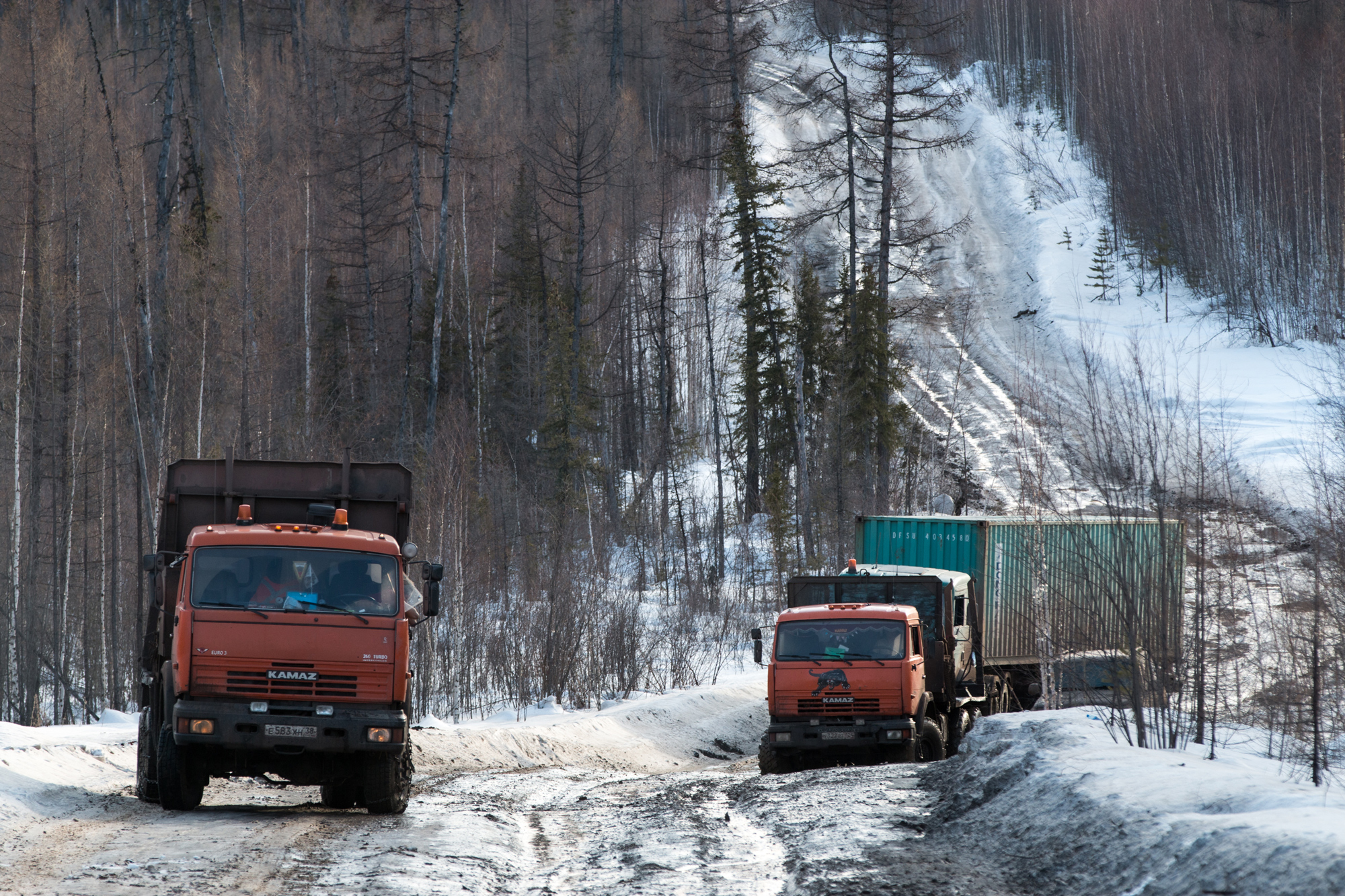 Traffic jams occur in the narrow parts of the road and the uphill and downhill slopes. If we were apprehensive in these parts of the road, imagine the truck drivers, hauling more than 30 tons total weight.

We learned a lot from the ice truckers. At this stage of spring, when the road begins to deteriorate, the period of greatest movement is between midnight and noon, when it is cooler, and the surface is more consistent. It was beautiful to see the work of those men, one helping the other, maintaining their self-esteem. We stopped to ask a truck driver who had rolled over if he needed help, and I came back with a bag full of fruits and vegetables from him. “No,” he had said, “everything is fine. This is normal. I am going to untanglethe truck and follow my journey.” The fruits and vegetables he presented us with were part of his load. Another driver who worked by putting chains on the wheels of his truck spoke to us with a smile, using probably the only words in English he could say: “Russia extreme,” indicating that this was Russia at the limit. To us, it seemed that these guys really liked their jobs. 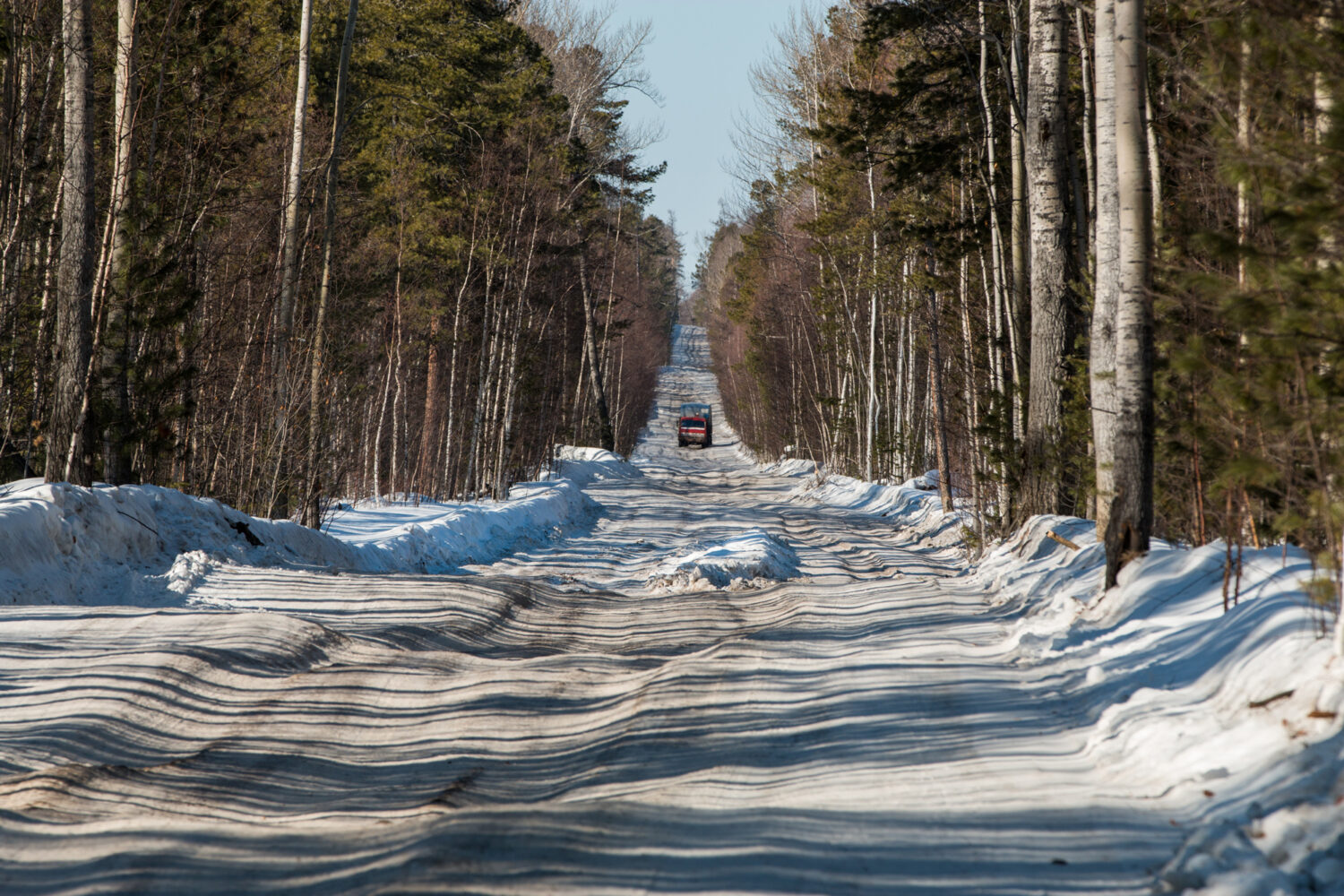 These truck drivers seemed to really like their jobs. 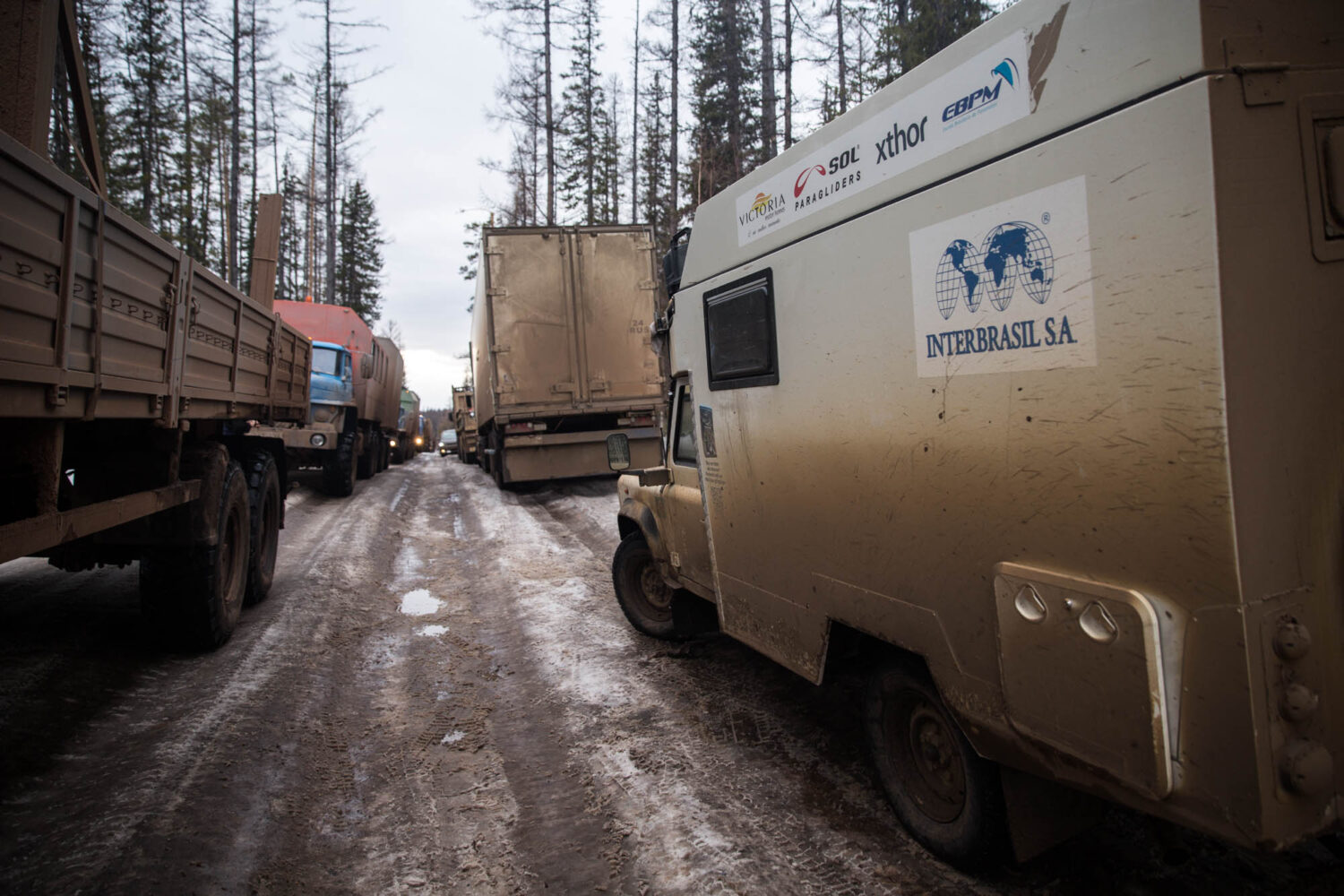 Agglomerated trucks meant trouble ahead, and many times we prayed for them not to slide into us. 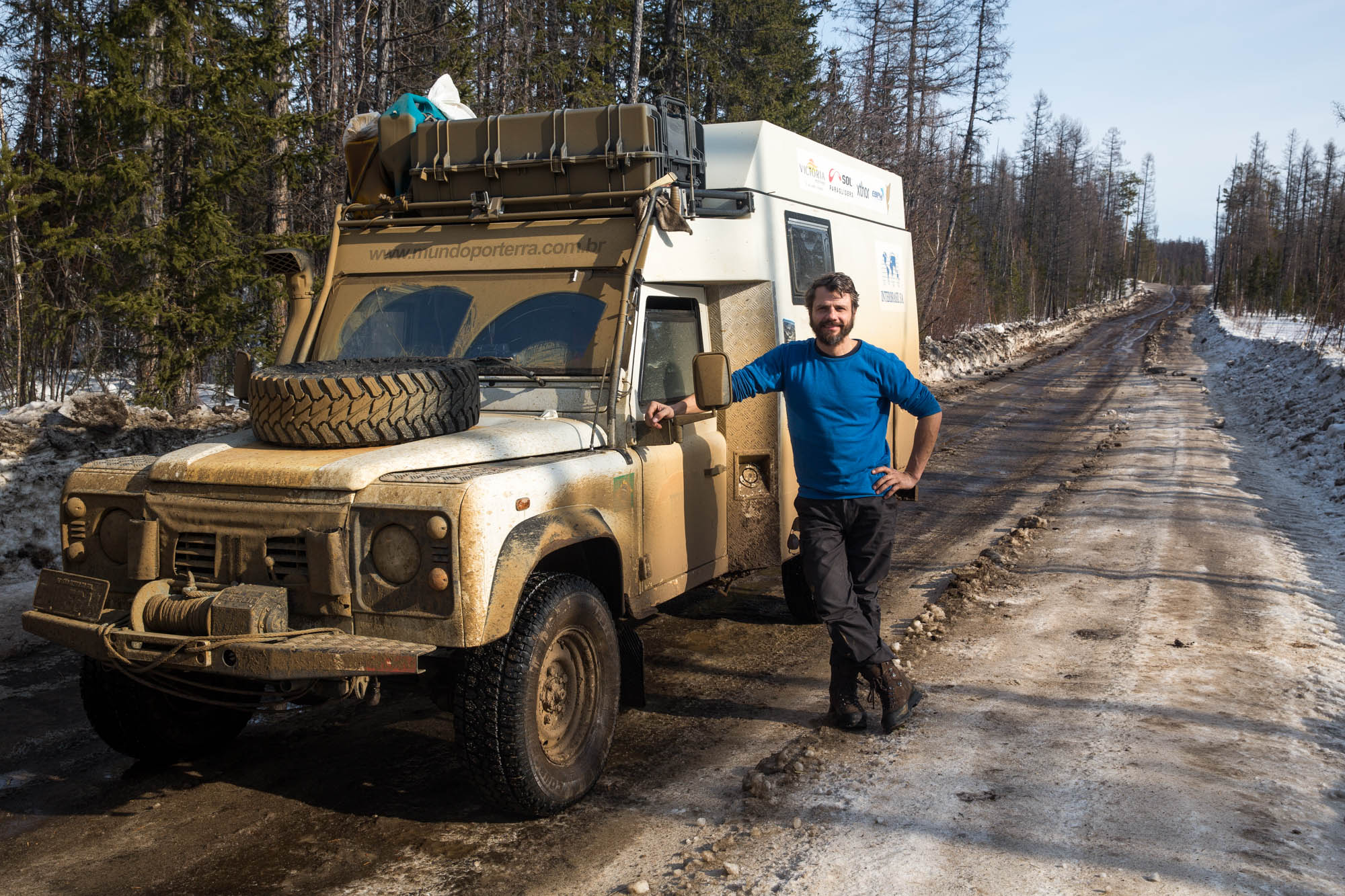 When the truckers noticed that a car with a Brazilian license plate shared the same adventure as them, they were amazed. For us, it was an adventure, but for them, it was normal life. 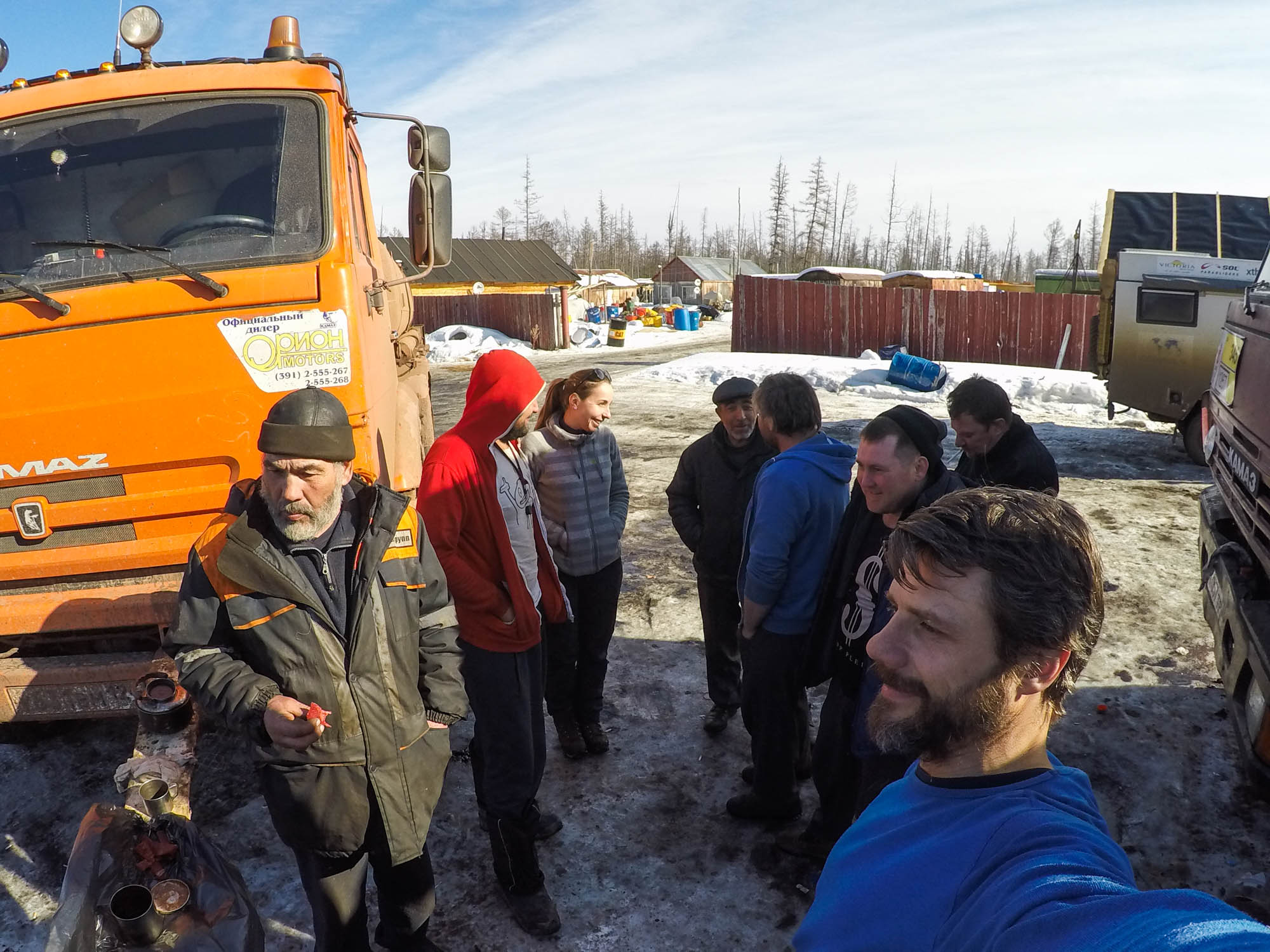 We learned a lot from the ice truckers.At a stop for lunch, truck drivers who were already deep in the vodka, offered us “aленина” (alenina), frozen reindeer meat, in addition to the fiery drink, of course. To top it off, they gave us large pieces of reindeer meat as a gift. 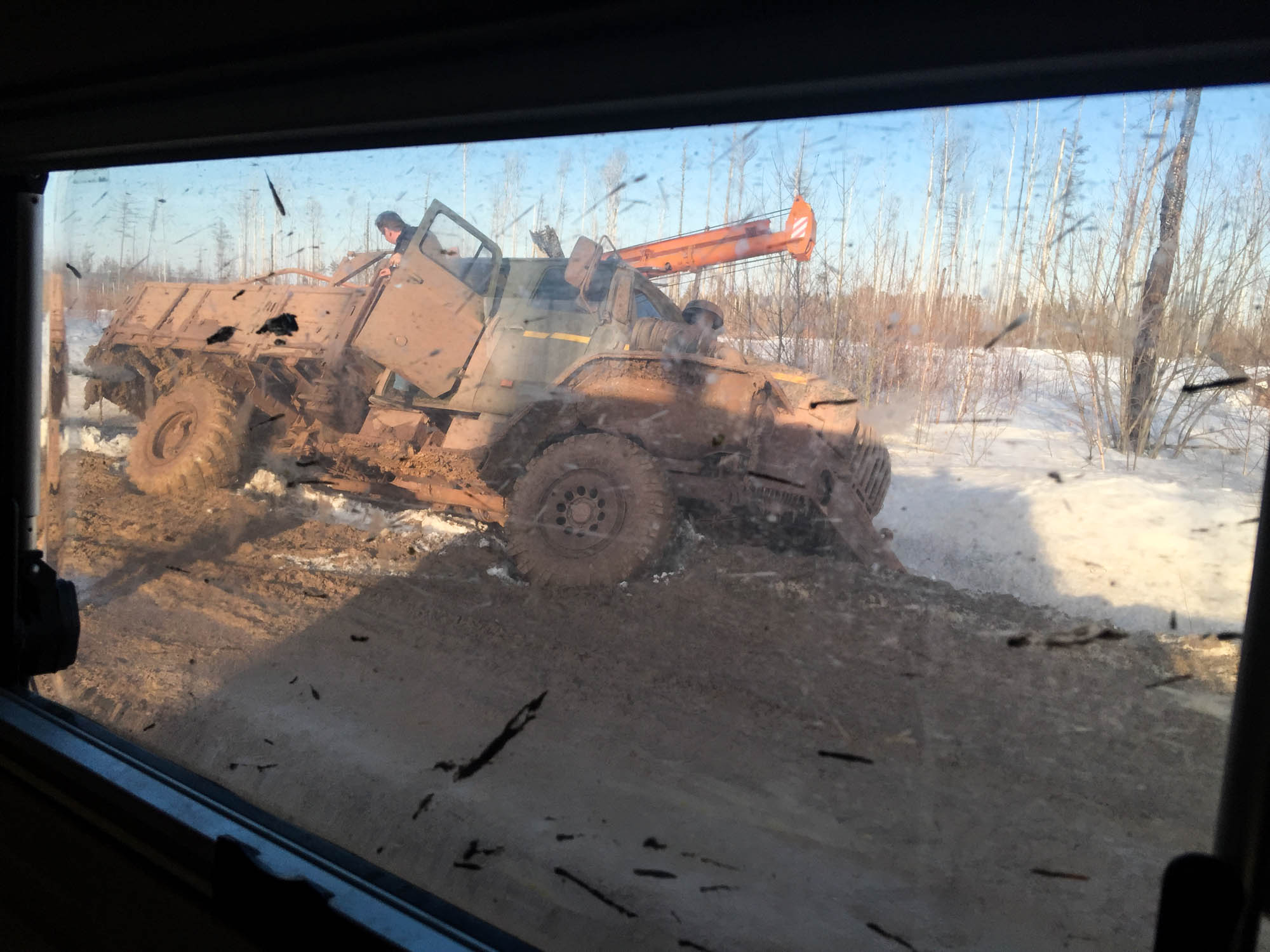 We saw many accidents happening in front of our eyes, but we were unable to help most of the time. 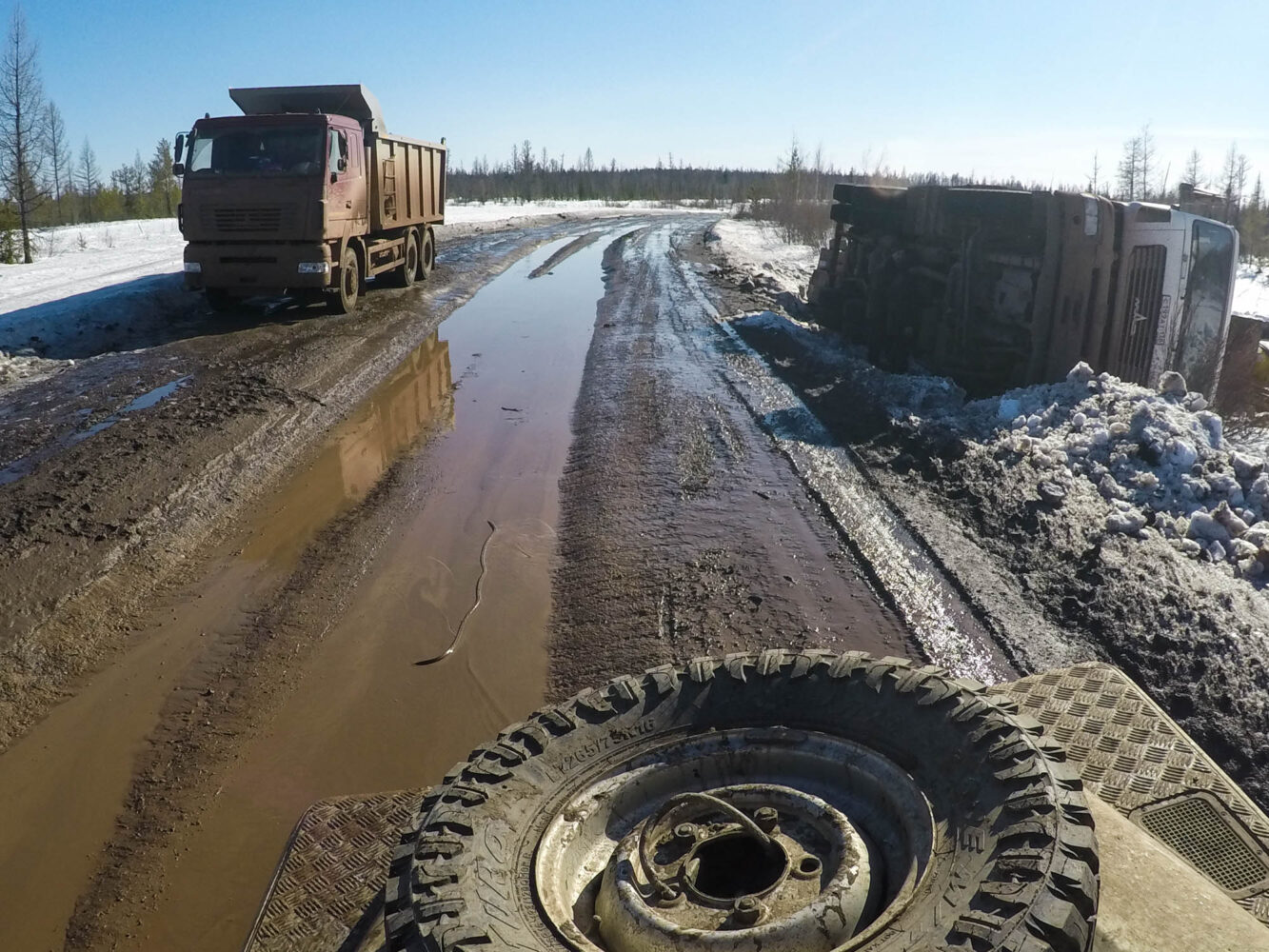 Even in the worst scenarios, the truck drivers seemed happy. 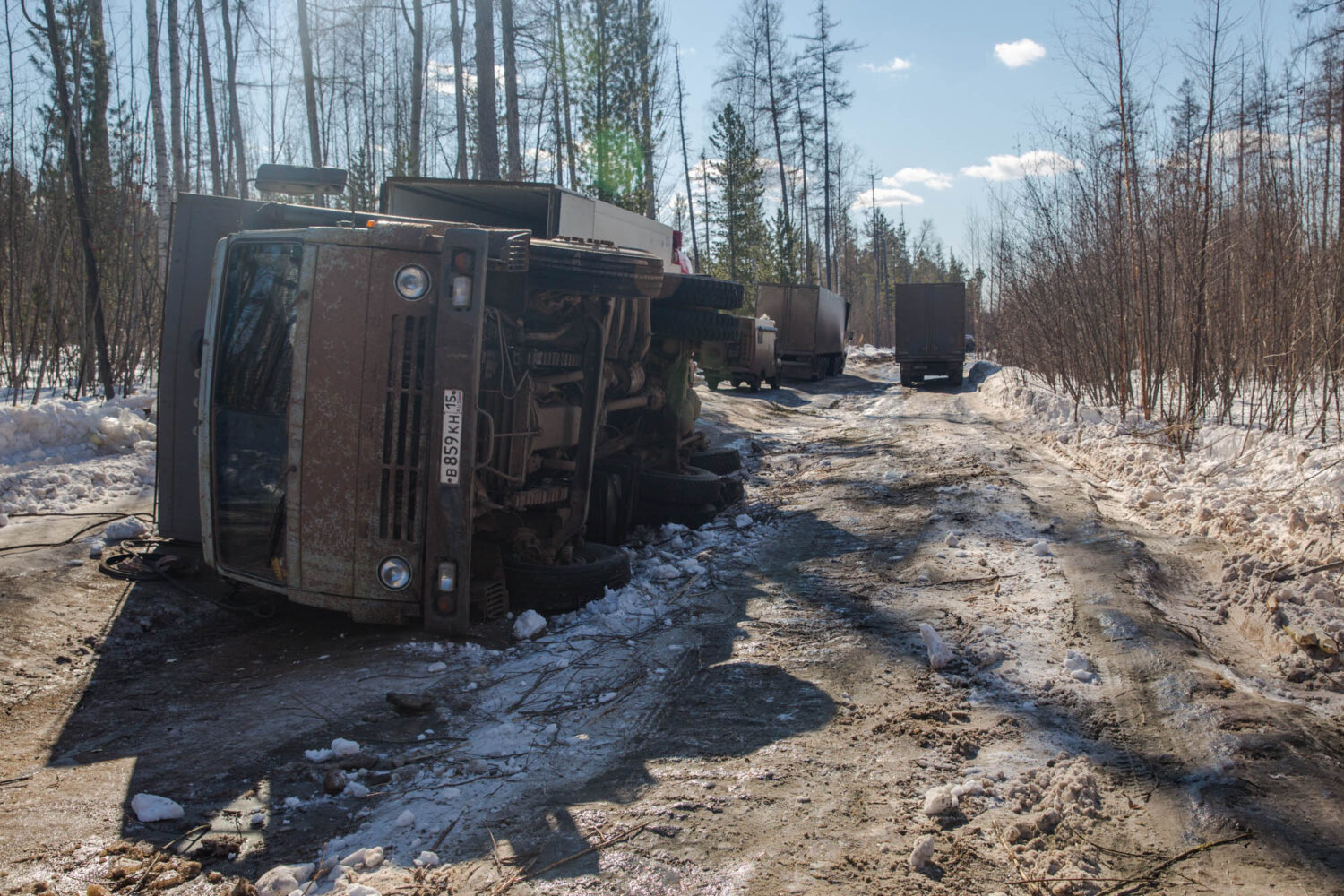 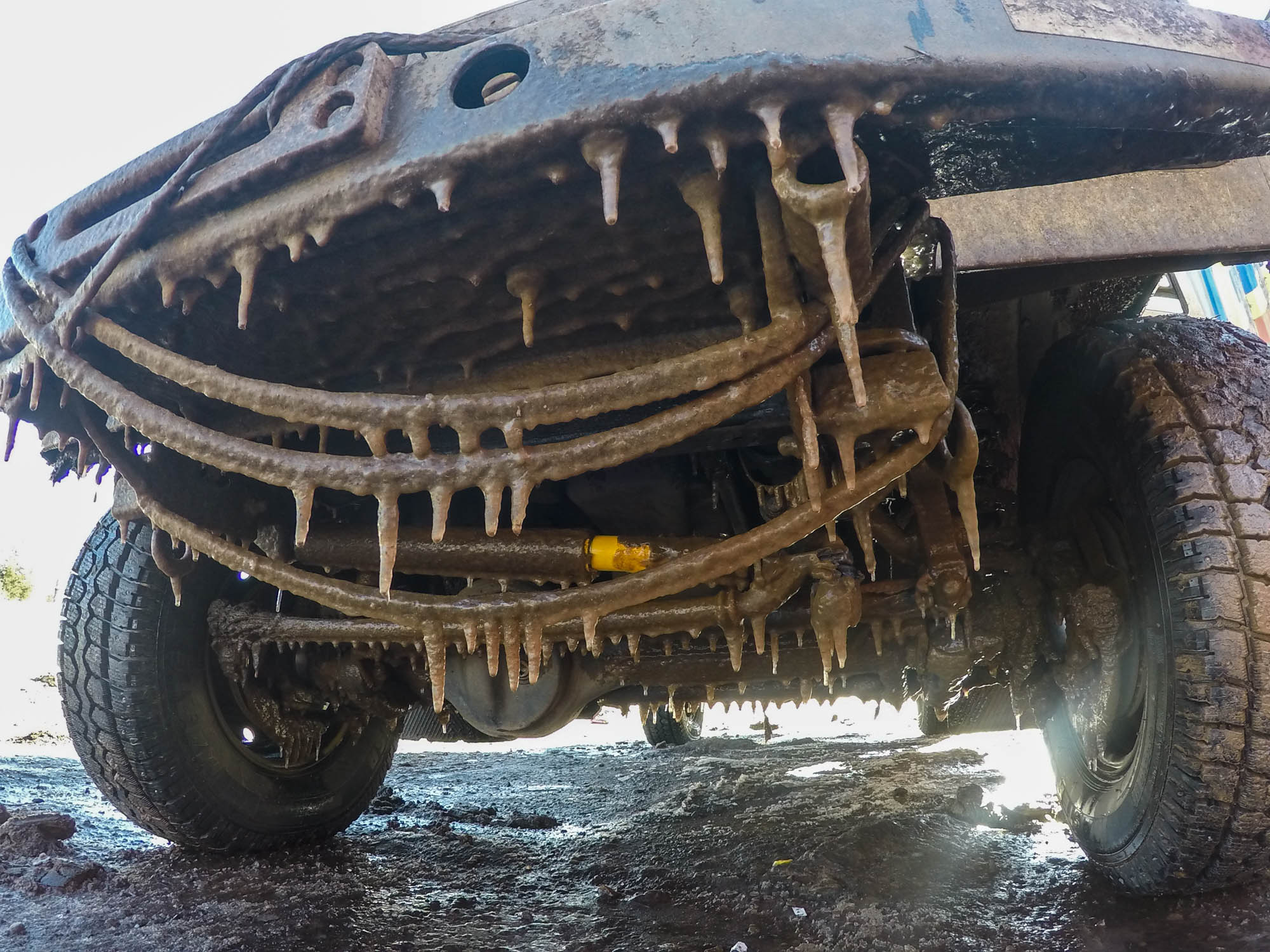 The appearance of our car gives a clue to the conditions of the terrain we were driving through. There was so much mud that we could barely see through the windshield. 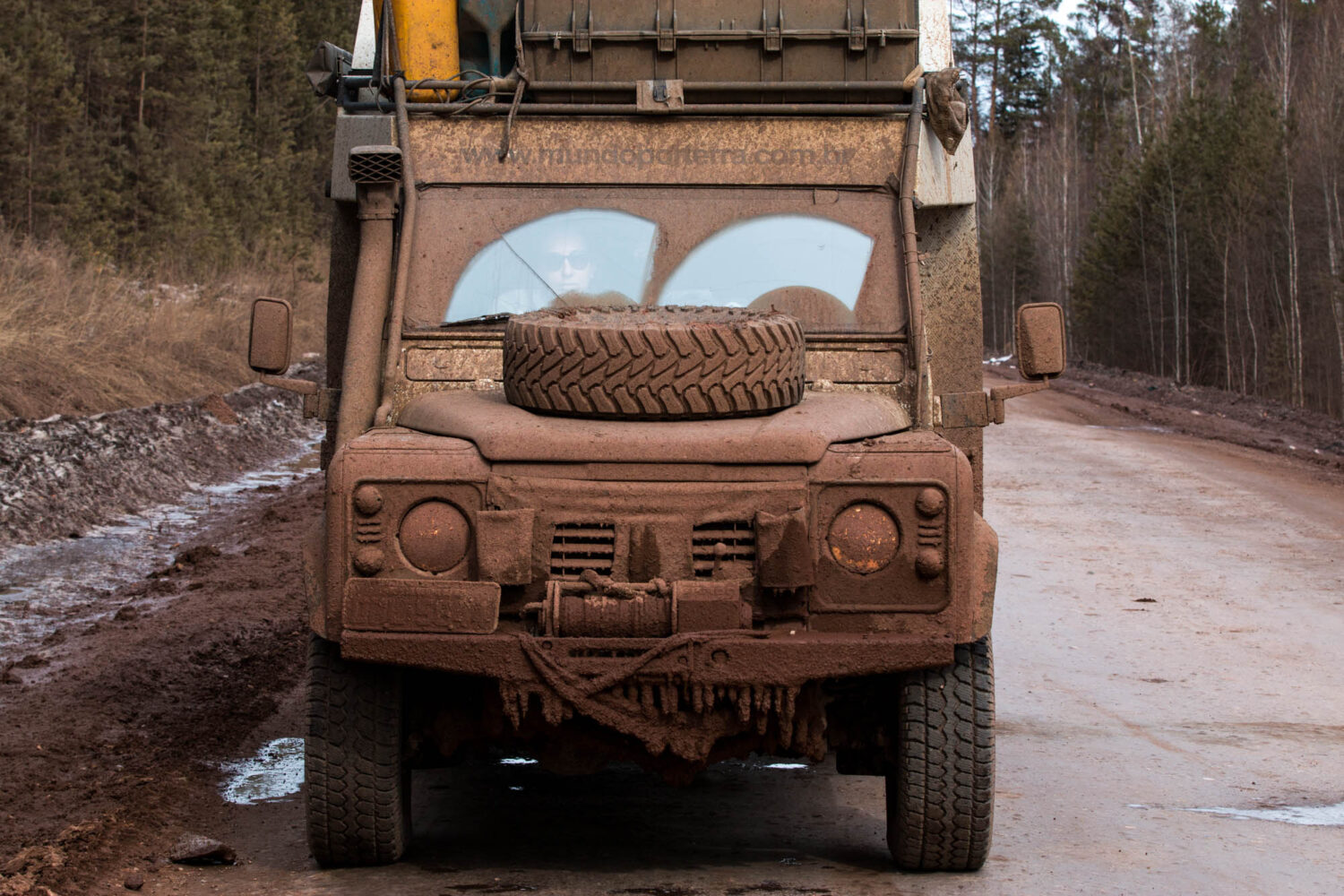 In the end, we were tired, dirty, but as happy as the Russian truck drivers.

Roy Rudnick and Michelle Francine Weiss Roy is a businessman; Michelle is an architect. At a certain moment in their lives, when work inside four walls no longer provided them much satisfaction, they took courage and dropped normal life. They decided to search in the world for their true passions and left for two round-the-world expeditions by truck. The wealth of information provided by the six years away from home led them to the decision to share their experiences in the most diverse ways. And so, they became photographers, writers, and speakers—disseminating the cultural diversity of our planet. Authors of Mundo por Terra—Uma fascinante volta ao mundo de carro (translated to English as World by Land—A fascinating trip around the word by car) and Mundo por Terra—Onde terminam as estradas.