It was with great joy this October that I read Japan was lifting its last Covid-19 travel restrictions and that the country would be open again to individual travelers. As of yet, Japan has been little visited by overlanders who bring their own vehicle, probably because it’s a long way from any of the main overlanding routes. Plus, it’s an island nation, thus requiring shipping, which quickly adds significant strain on the budget. And while Japan indeed is an expensive country to live or travel in, there are ways to minimize costs—I’ll share this with you at the end of this article. 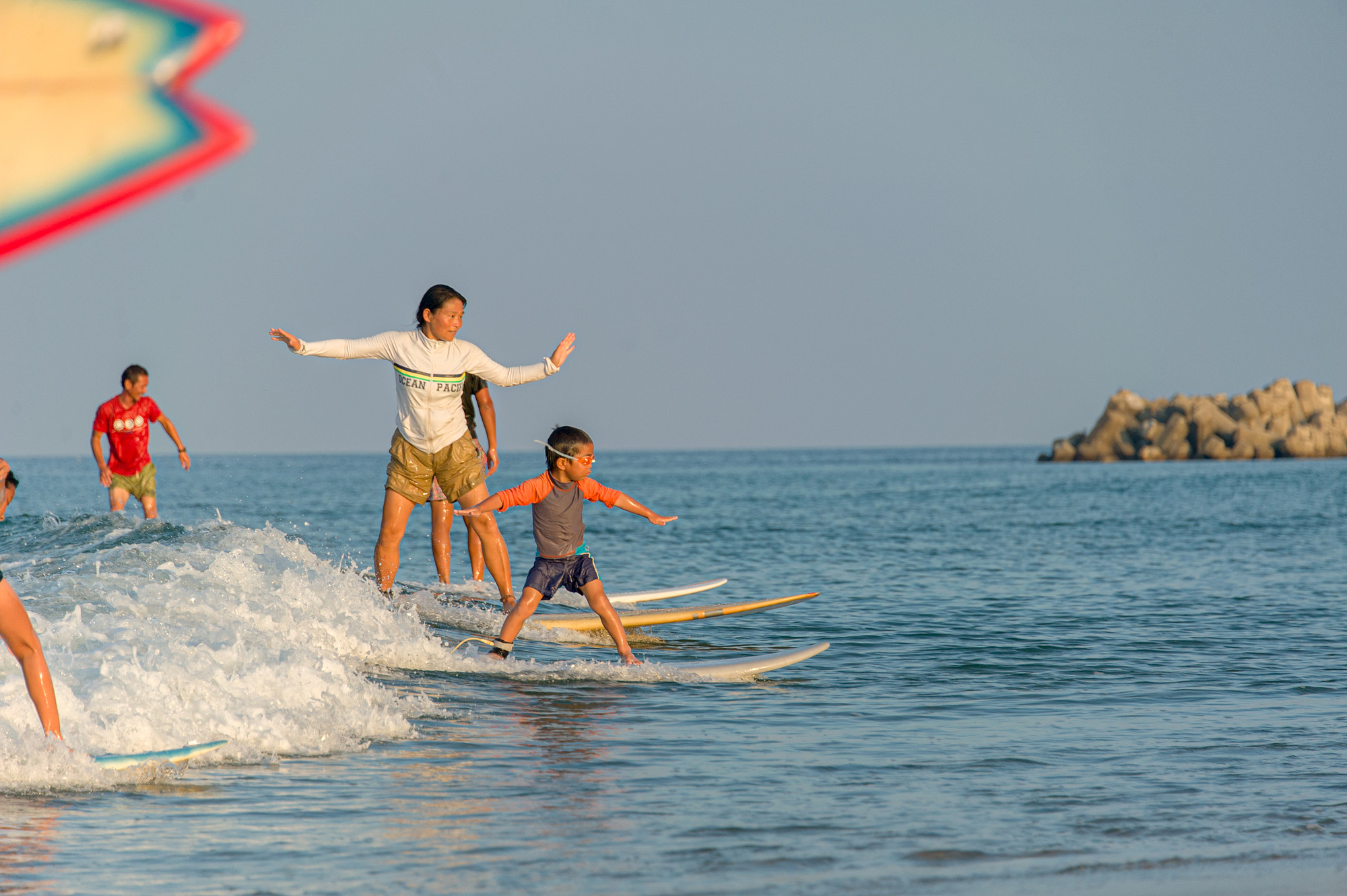 Before Covid-19, Coen and I traveled in Japan for nine months, and we would have stayed longer if immigration regulations had allowed us. The country had us blown away. You can see and feel Japan’s rich, long history in samurai towns and in the diversity of temples and other sites. The landscapes vary from mountains to beaches, and from ultra-modern metropolises to hamlets that seem to take you back a hundred years in time.

But wait, what exactly does it mean, to overland in Japan? After all, Japan consists of some 7,000 islands of which a little over 400 are inhabited. The four main islands are Kyushu, Honshu, Shikoku, and Hokkaido. Three of them are connected by bridges or tunnels, while traveling to Hokkaido requires a ferry to get your vehicle across. It makes sense to limit your overland journey in Japan to those four islands.

Here are five reasons to put Japan on your overland bucket list.

Diversity of the four main islands

If you love multiple-lane highways and traffic jams, Honshu is your destination. This is the main island, with the capital Tokyo and many other densely populated cities. Fortunately, Honshu offers a lot more. It’s home to Mount Fuji and the former capital of Kyoto with over 1,500 temples. Both are part of Japan’s main tourist attractions, but away from this overcrowded, central part of Honshu, you will find beautiful national parks, coastal roads, and historic towns. 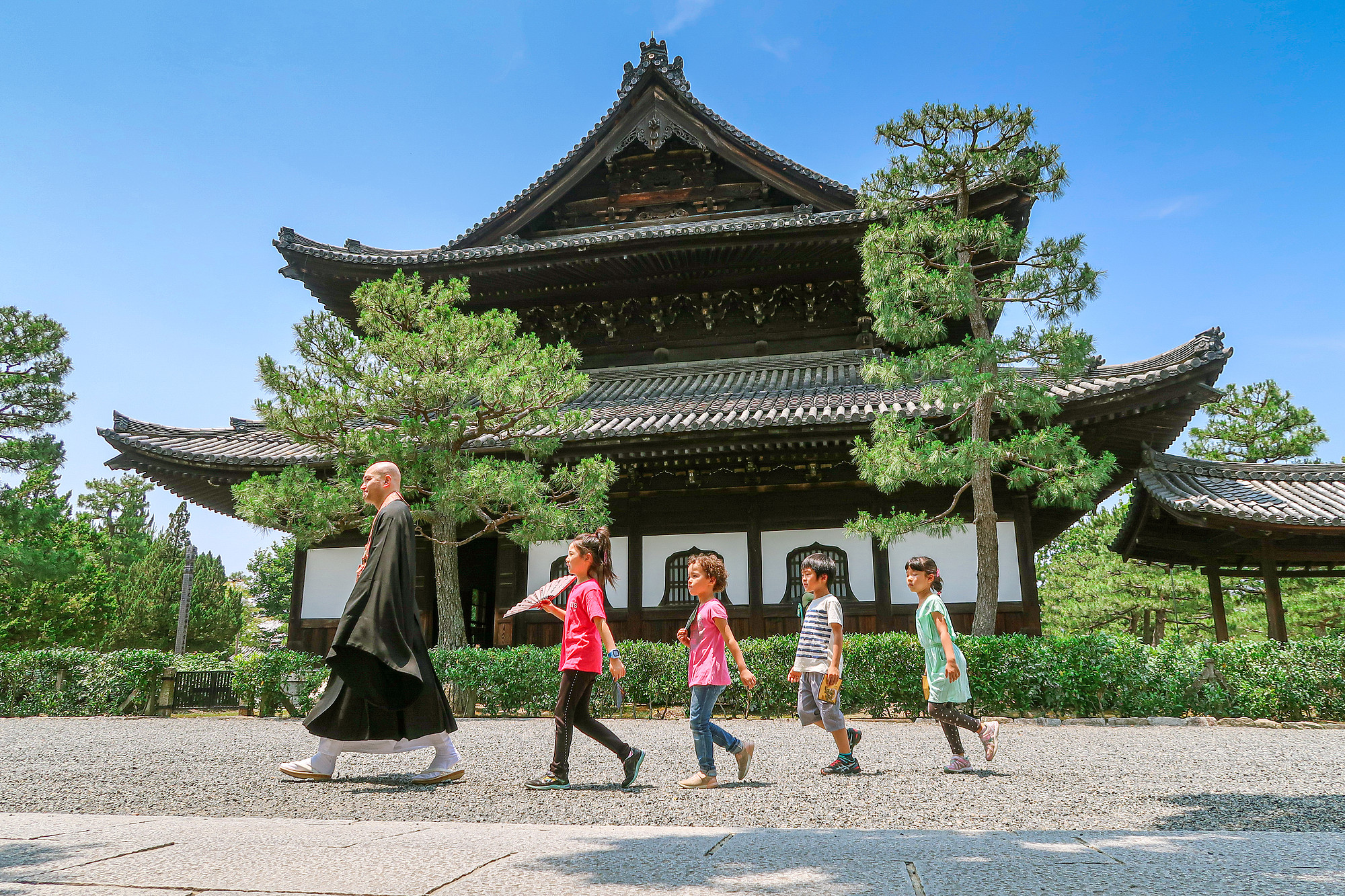 North of Honshu lies Hokkaido. Mostly flat farming country, the island features natural, open-air hot baths, and it was here that we even saw some wildlife. We opted for visiting the island in winter because it’s where most of the impressive snow and ice sculpture festivals are organized, particularly in Sapporo. Hokkaido is a ski destination, and apparently boasts the best snow in the world (or so the locals will tell you). Do sign up for a guided tour through Sapporo’s beer factory, as well as one of Japan’s famous whiskey factories—both include tastings.

To the south of Honshu lies Shikoku, the smallest of the major islands. It is popular as a vacation destination because of its beaches (don’t get your hopes up, they won’t earn any prizes, but they are Japan’s best). Behind the beaches rise densely forested mountains, and on the north shore stretches the Seto Inland Sea. Crossing the bridges between Honshu and Shikoku provides you with amazing views of the incredibly blue waters with many islands. 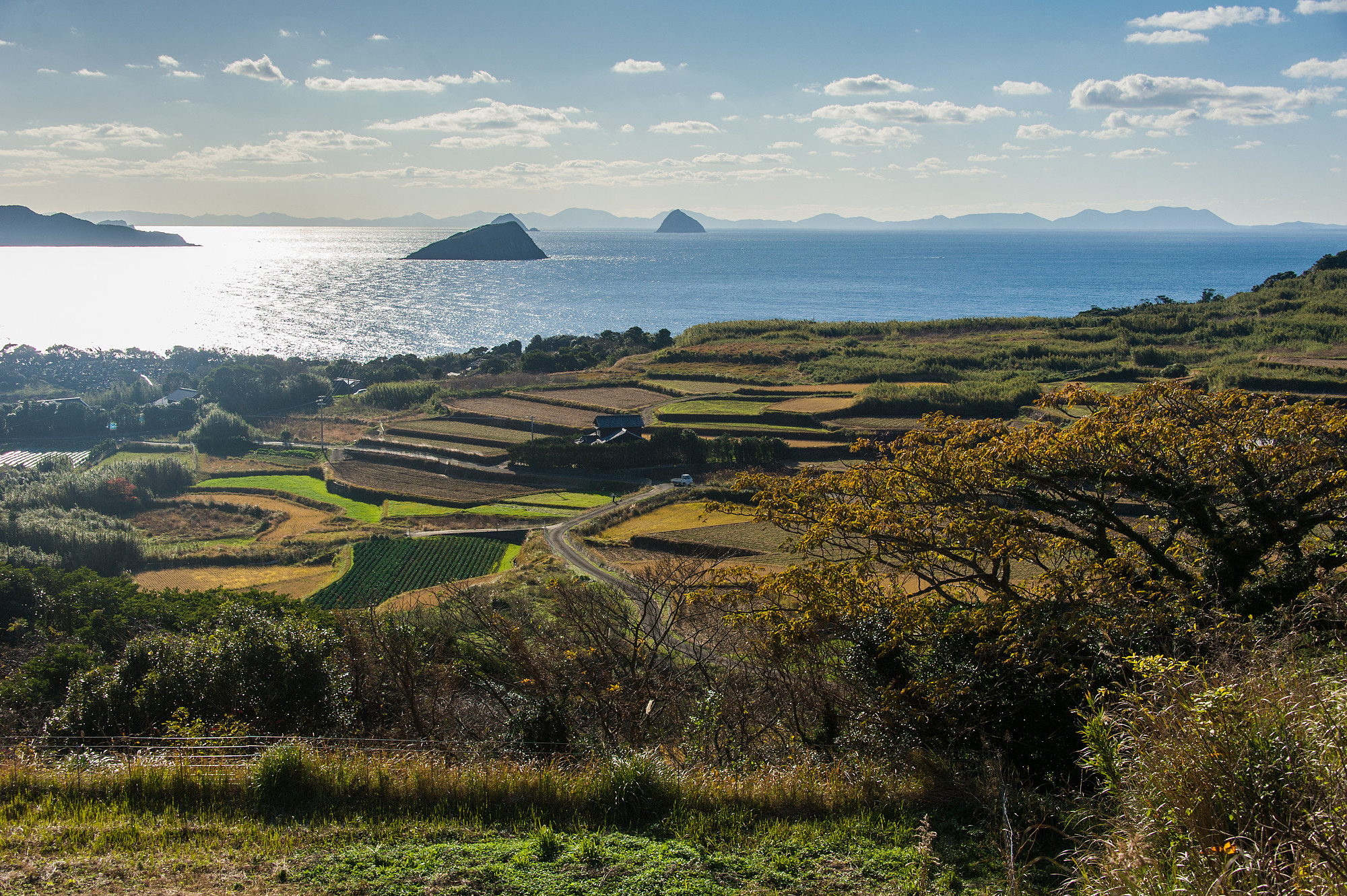 Kyushu lies southwest of Honshu. Apart from severe winters, it pretty much offers everything on a (relatively) small island that you find elsewhere in Japan—mountains, national parks, beaches, and historical sites. The east side is popular with locals who have opted for an alternative way of life, away from Honshu’s rat race. It’s a perfect island to focus on if you have little time but want to feel and see what Japan is all about.

I already mentioned Honshu’s extensive and often crowded highway system, which, admittedly, can be convenient to get you from one far corner to the next. Fortunately, there are lots of minor roads too, meandering endlessly through the mountains. Japanese people are generally careful, slow drivers, which adds to a sense of calm. Don’t expect any hard-core off-roading opportunities or even unpaved roads. You may encounter an occasional logging track but that’s about as extreme as it gets.

Whether you are covering distances at a brisk pace or trundling leisurely through the countryside, there are frequent opportunities to stop for some sightseeing or strolling through old towns. Buddhist temples and Shinto roadside shrines abound, and you will come across castles, royal tombs, samurai towns, and other historical sites. Don’t miss the soberingWWII memorial sites in Nagasaki (Kyushu) and Hiroshima (Honshu). Japan has a number of UNESCO World Heritage sites as well. 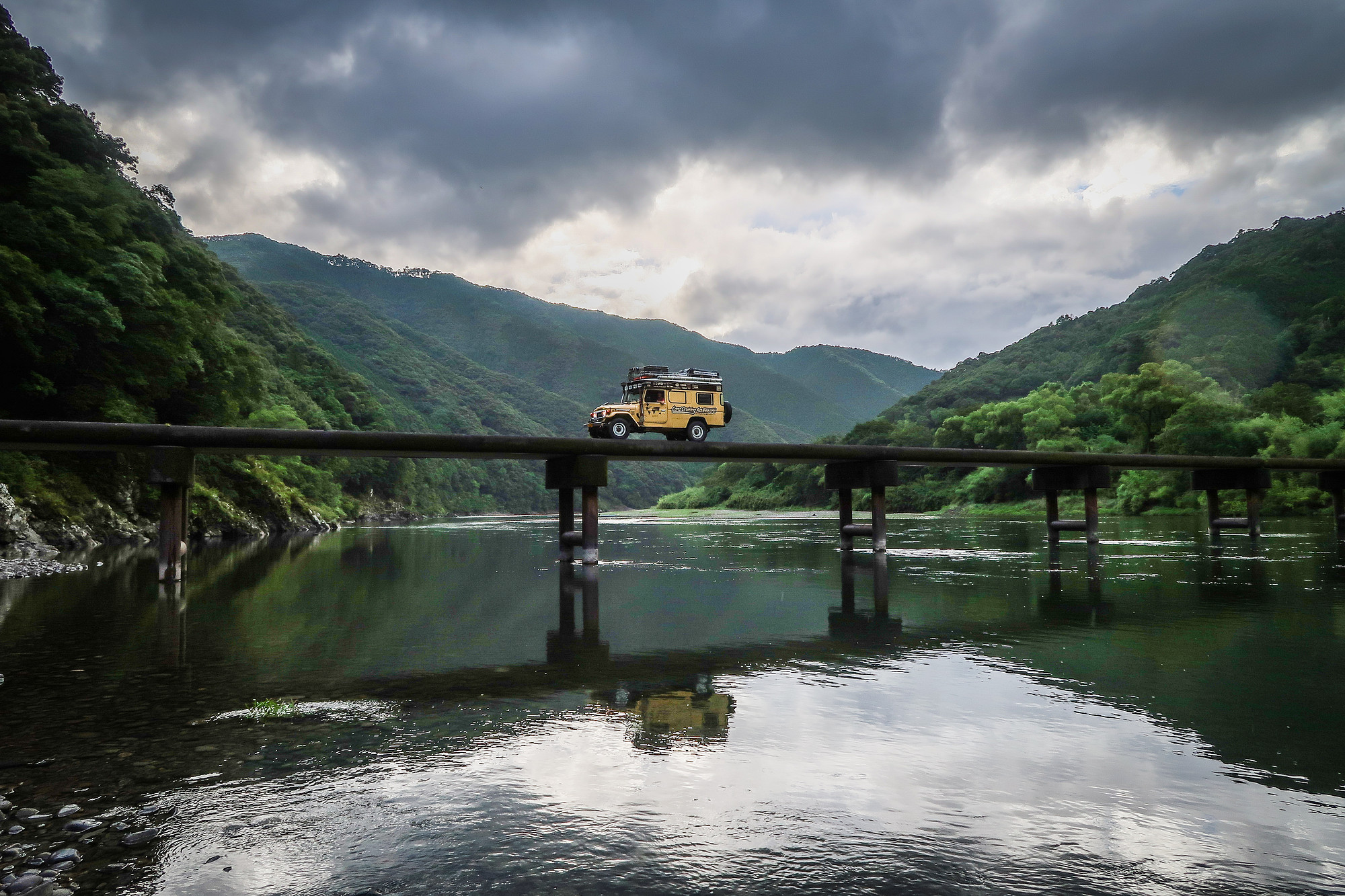 Freedom to wild camp with easy use of public facilities

You are typically free to pitch camp wherever you want in Japan. Obviously, when in or near hamlets, farmlands, etc., check with the owner(s) to find out if they are okay with you staying there.

Japan has a michi-no-eki system. This fantastic road-station system includes parking lots with public toilets along main and minor roads where you can spend the night free of charge. Many Japanese people use it. The road station may come with a tourist information center, and a shop selling handicrafts, a farmer’s market and restaurant, and sometimes an onsen (hot bath). 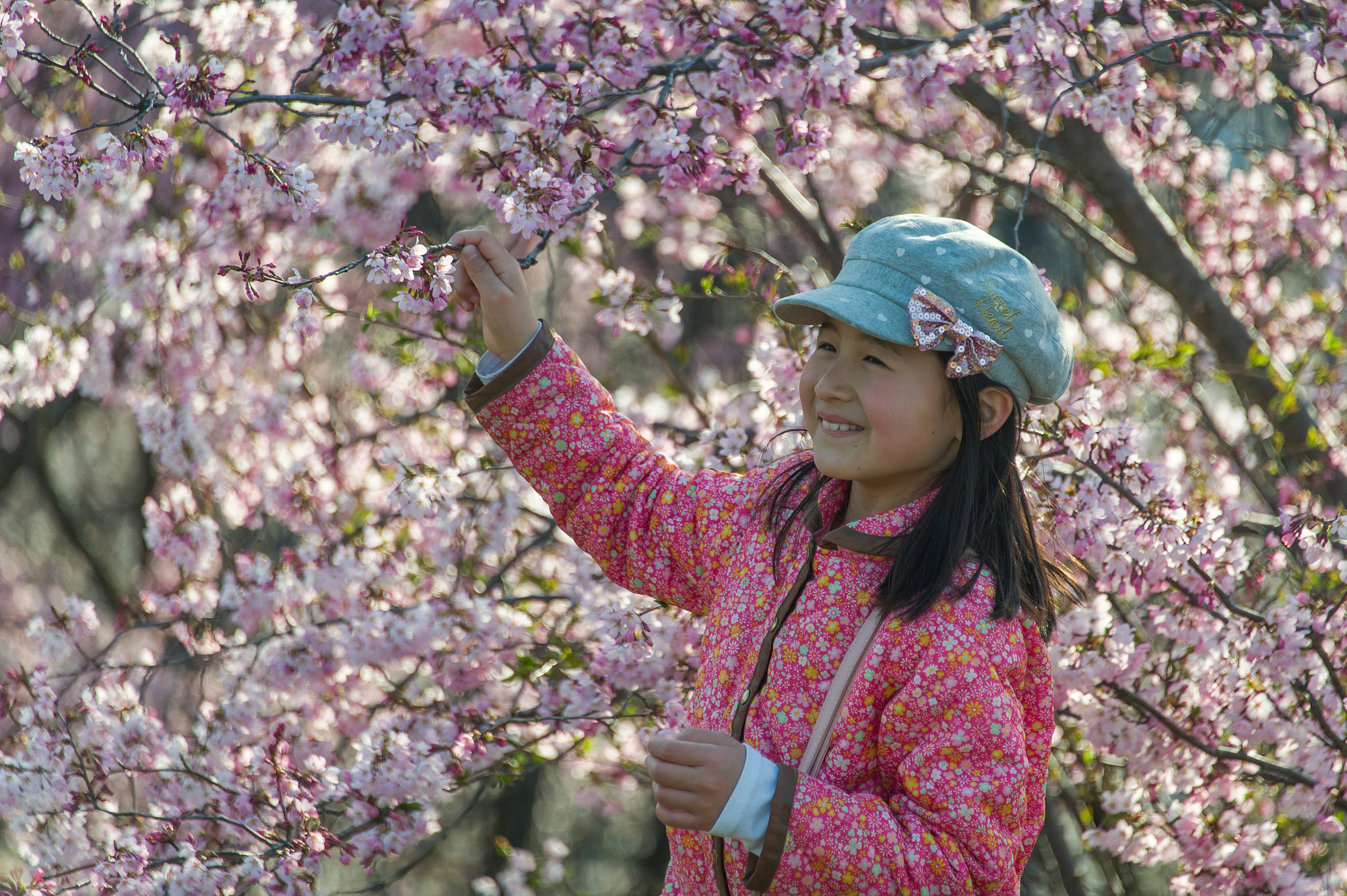 Hospitality and generosity of local people

When we were camped at michi-no-ekis, locals frequently visited for a chat or to hand us some fruits, local snacks, or drinks they had just bought at the farmer’s market. In this way, we had many short, friendly encounters which made us feel welcome. Not many people speak English, so have Google Translate at the ready (and download it so you can use it offline as well).

Locals taught us how to properly prepare fresh soba noodles and showed us how they harvested and dried seaweed; sometimes we were invited for lunch or dinner.

As Land Cruiser overlanders, our home on wheels was in its country of origin, and we encountered warm welcomes from the Land Cruiser community. We stayed at people’s homes and joined them in gatherings. While Japan is Toyota country, our overlanding friends Stephanie and Leigh (GrizzlyNBear Overland) had similar experiences with the Land Rover community. 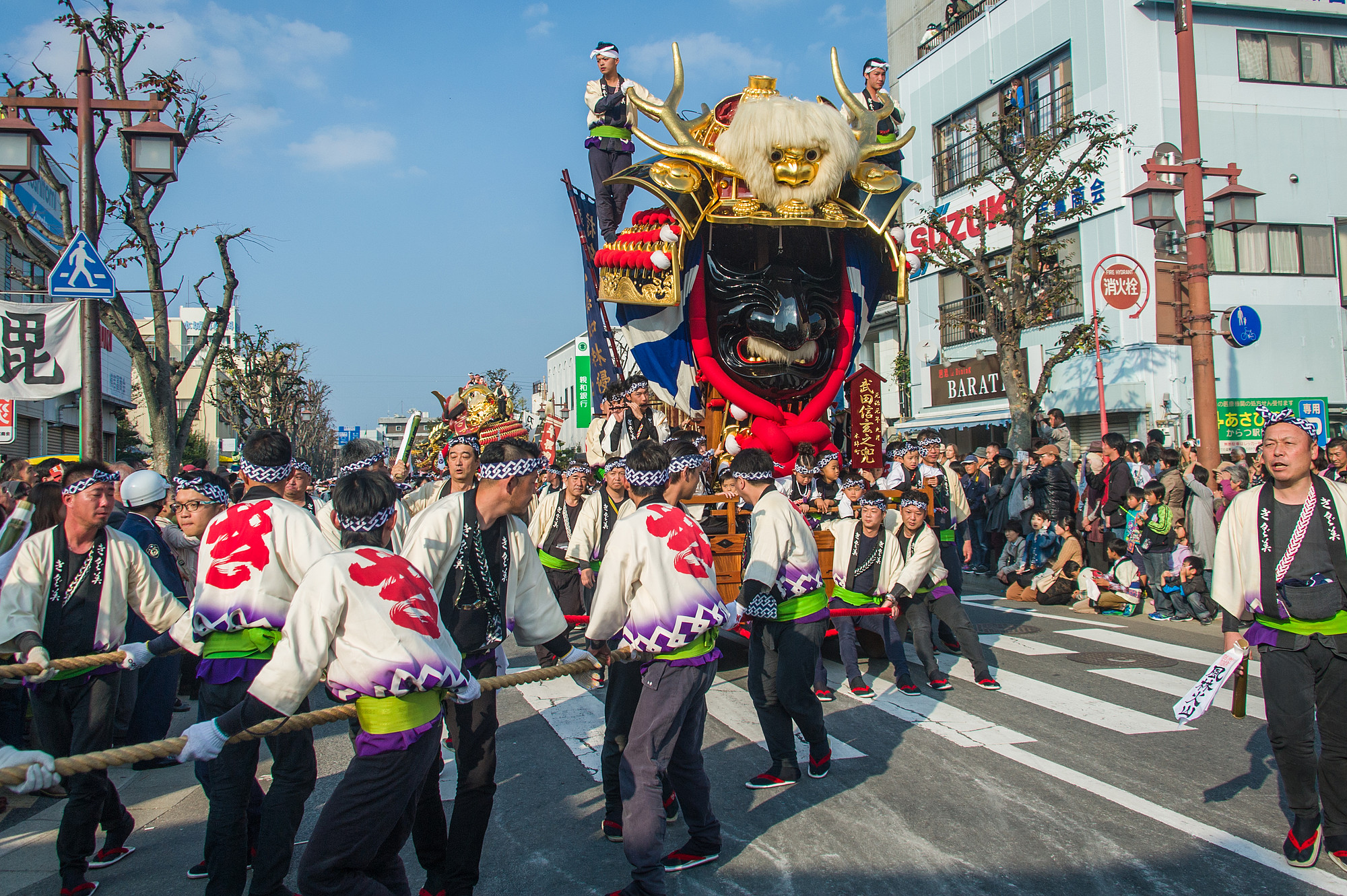 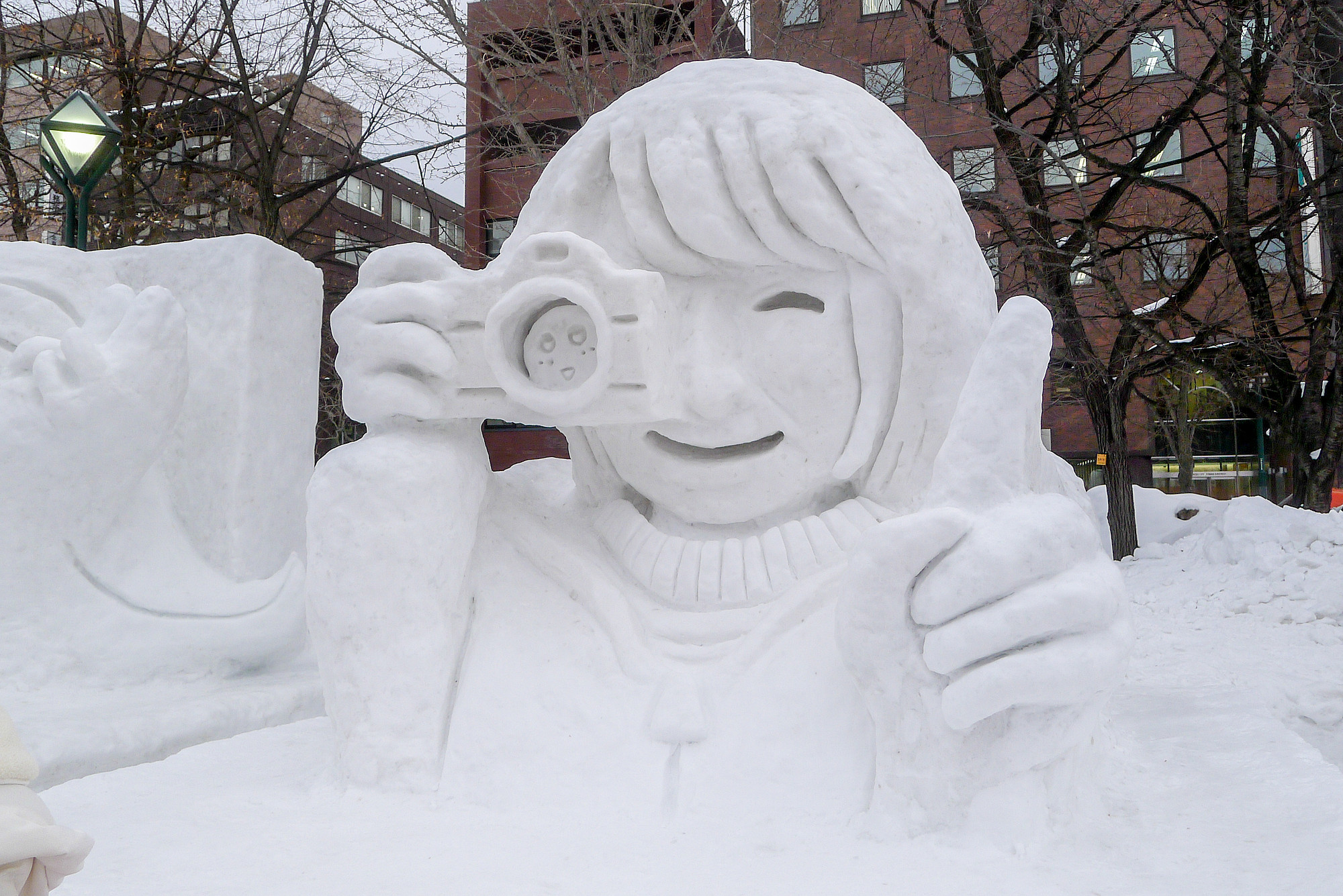 Many annual festivals take place around shrines with processions in which a deity is carried through the community on a palanquin in an impressive parade. Other festivals celebrate historic events and may include colorful floats that are pushed or pulled through the town. 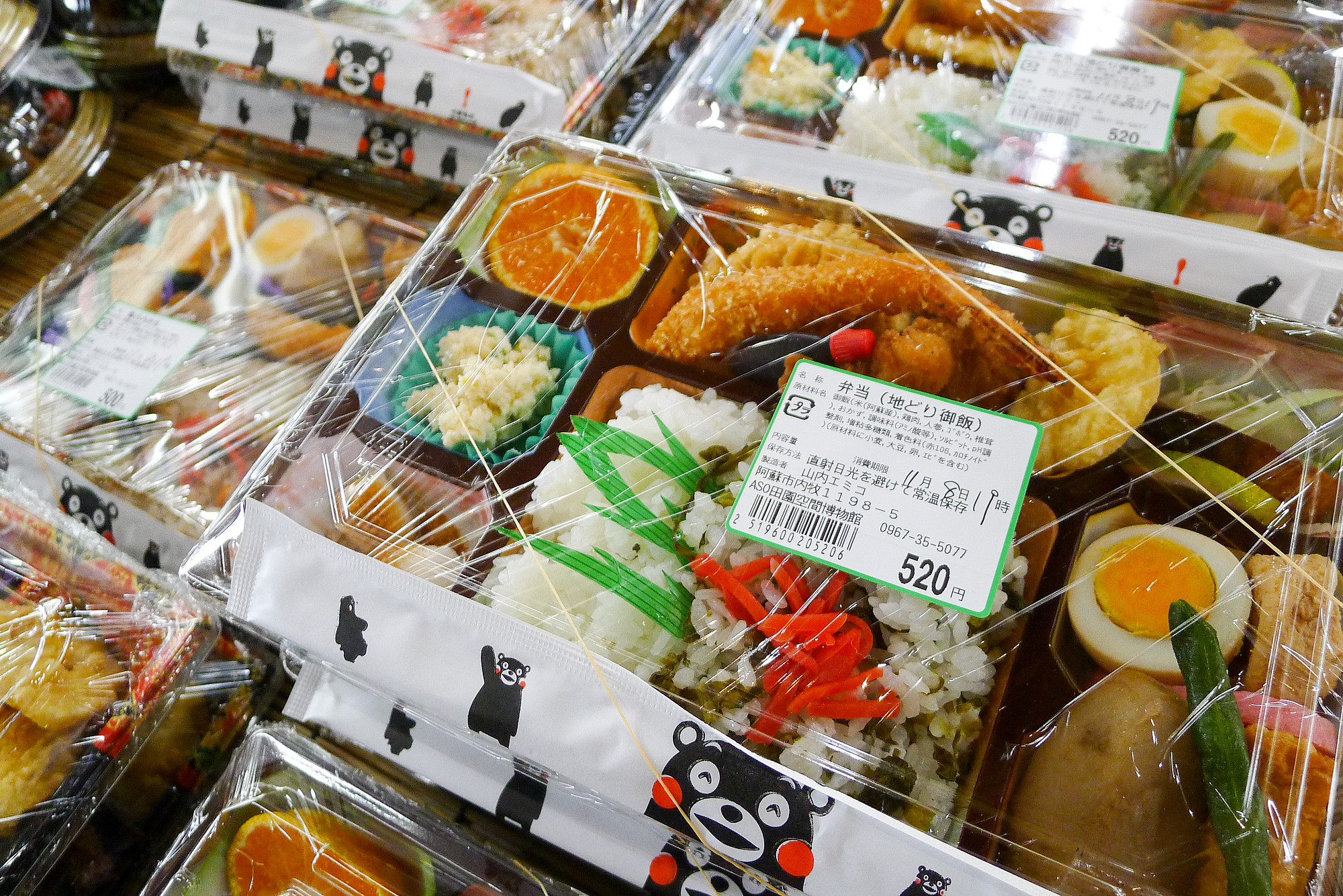 Overlanding Japan on a budget

If you have money to spend, go for it. Enjoy the luxurious, spa-like, public baths and go out for dinner. However, if you are on a tight budget, here are some tips: 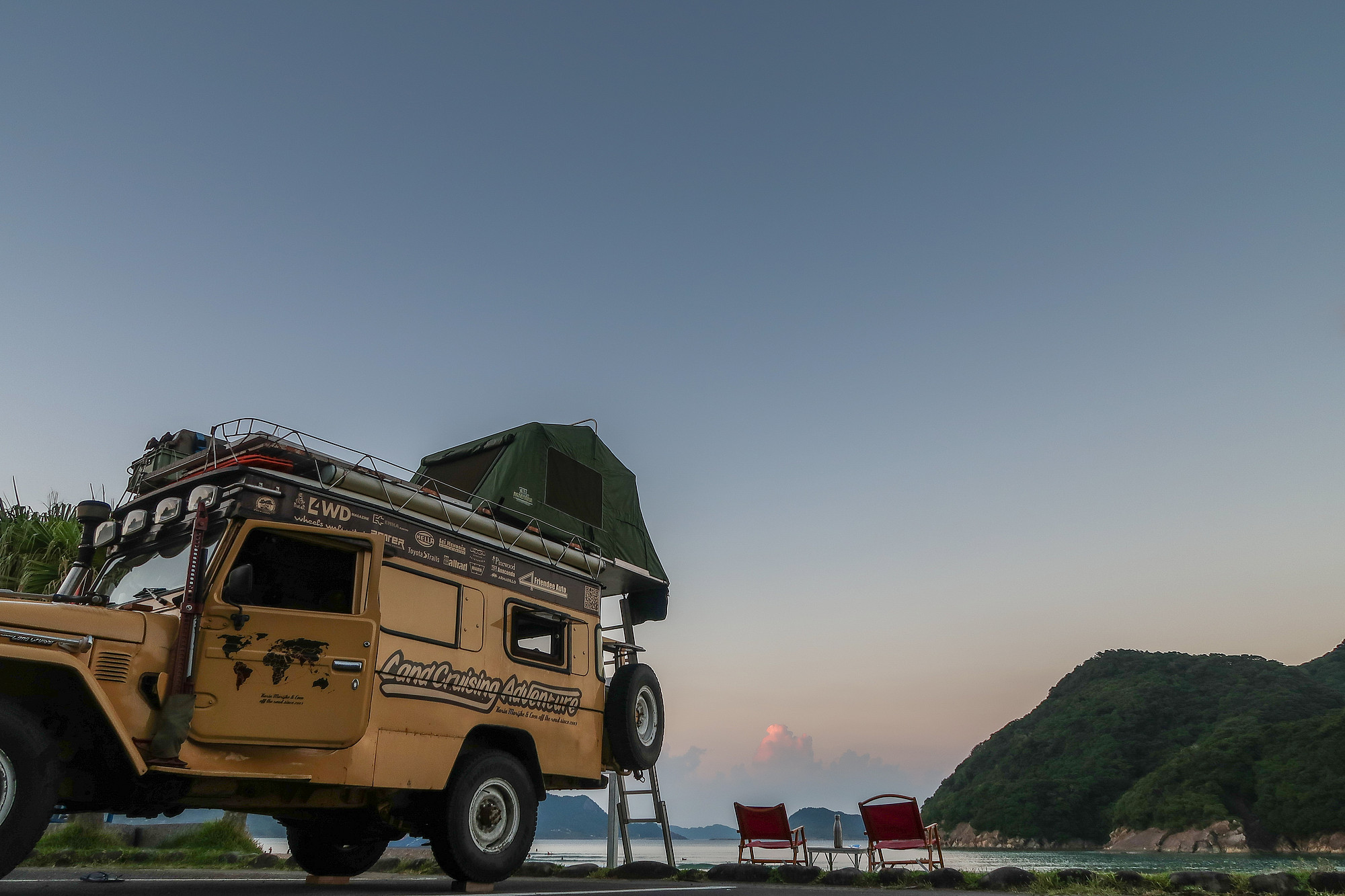 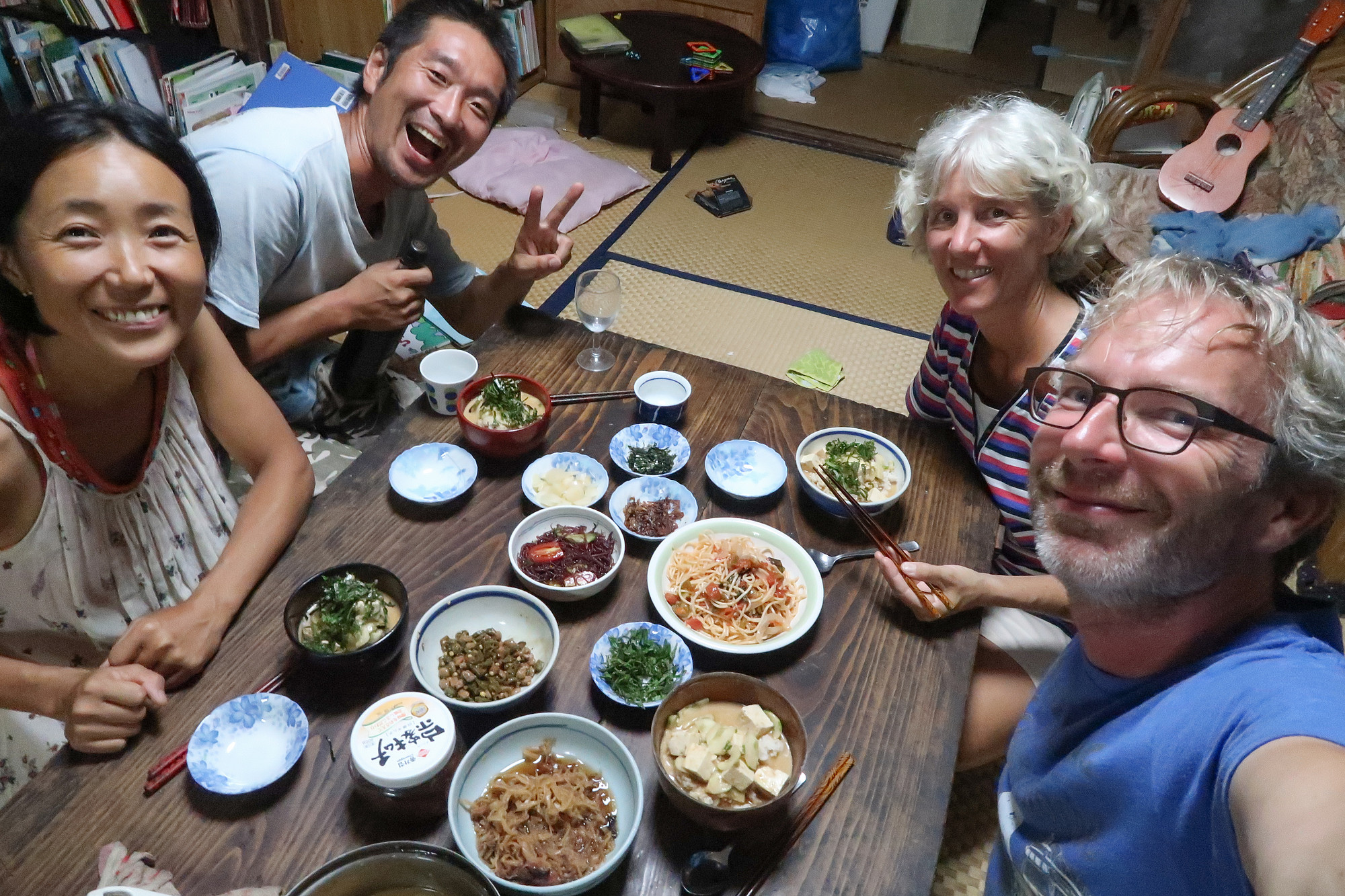 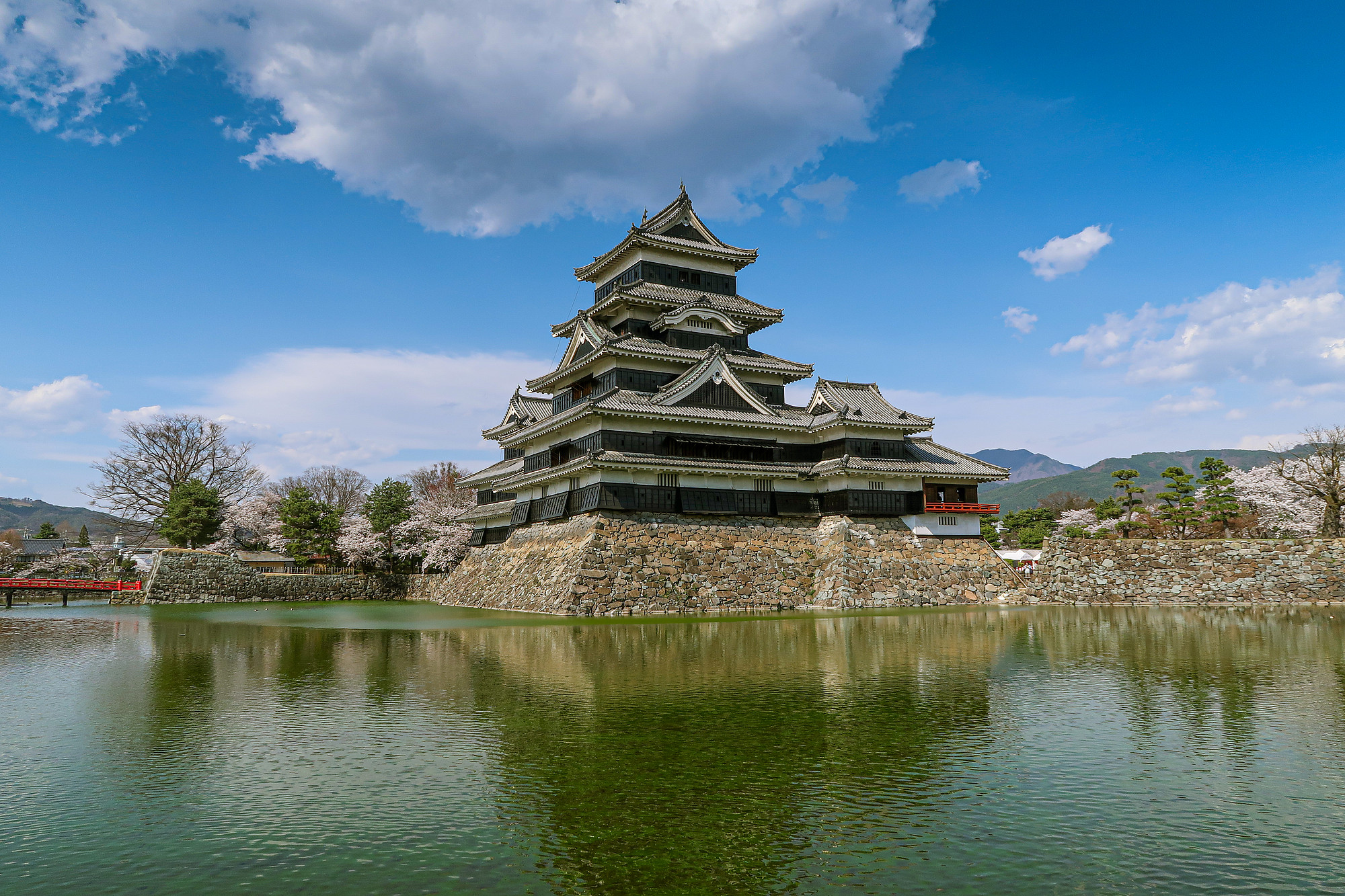 Freelance writer Karin-Marijke Vis, along with her partner Coen Wubbels, photographer, combine their love for adventure with work they enjoy. Sometimes described as being the ‘slowest overlanders in the world,’ they believe in making connections and staying in a place long enough to do so. In 2003, the couple purchased an antique BJ45 Land Cruiser. Infected by the overland bug, they have continuously traveled in Asia and South America ever since. Since 2017 they alternate their Land Cruiser travels with long-distance hikes. Authors of two books and they’ve been published in car/4x4 and travel magazines around the world.