Exactly one year ago, Canadian bike manufacturer Rocky Mountain teased the world with a concept bike purpose-built for overland travel. Aptly named the Sherpa, it was unique unto itself with full suspension components paired to 27.5-inch rims and plus-sized tires. That bike drummed up more buzz and chatter than anyone expected, including its creators at Rocky Mountain. Of the many questions asked after the unveiling of the Sherpa concept was the obvious––will it make it to production?

Unlike many concepts, the Sherpa will not only go into production, it’s already on route to dealers as we speak. Being one of only a handful of lucky riders to get my hands on a Sherpa, I’ve had the chance to ride it almost daily for the last five weeks including a lap around the famed 100 mile White Rim Trail just out side of Moab. So how does it ride?

I’ll get to that later. 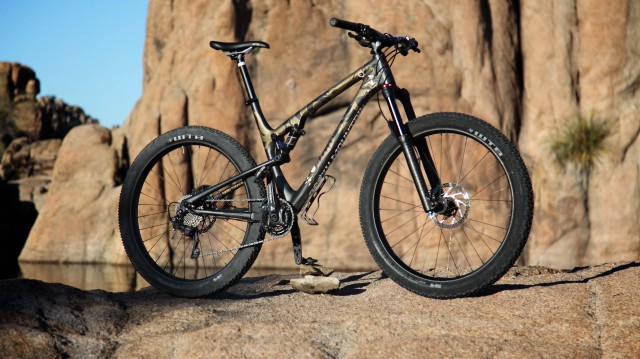 What makes the Sherpa so innovative is its design mission. Many bikes built for overland travel, or bikepacking, are little more than wheeled donkeys, beasts of burden constructed simply to haul your junk from point A to point B. The Sherpa was created to not only transport you and your gear, but without sacrificing the fun of a spirited high intensity ride. Huck your normal touring bike off a ledge and it will leave behind a crater and a yard sale of scattered gear. The Sherpa on the other hand, begs to be ridden to the ragged edge, even when shouldering a full compliment of camping gear and supplies.

To achieve this end, Rocky Mountain built the Sherpa around their proven Element carbon fiber main triangle. Aft of that is an entirely new rear assembly designed to accommodate the larger plus-size wheel package. Those wheels consist of a WTB Scraper 27.5-inch 45mm rim paired to WTB Trailblazer 2.8 tires. The slightly larger than normal footprint offers many of the benefits of a full fatbike, but without the added weight and reduction in maneuverability. They also roll considerably faster than full-fat, something that comes into play when knocking down long miles day after day. Helping to attenuate the ride is a Manitou McLeod rear shock unit giving the Sherpa 95mm of rear suspension travel. Up front is a newly designed 27.5+ Manitou Magnum suspension fork with 120mm of travel. 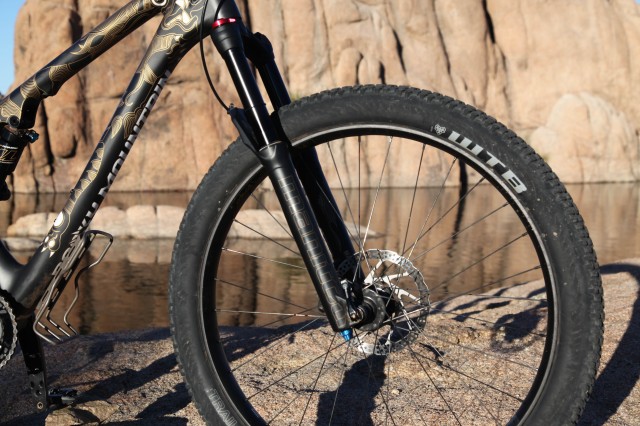 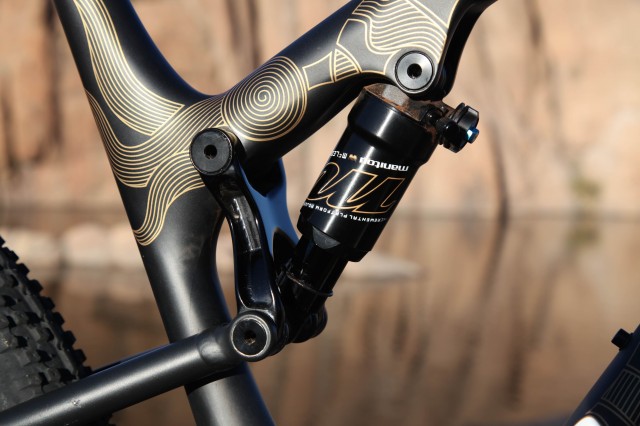 Rounding out the parts package is a compliment of Shimano bits. The rear derailleur is XT, the shifters are SLX, and the brakes are Shimano M506 with 180mm rotors. The Race Face Turbine cranks have a 24 tooth inner ring and a 38 tooth large ring for maximum gear choices, something worth having when riding under full load.

To further deliver on the overland aptitude of the Sherpa, Rocky Mountain will offer a complete system of bags for the bike built by trusted bag maker, Porcelain Rocket of Alberta. For my test bike, I used the seat, frame, and bar bag harness system which proved to be more than enough volume, even with a load of 8 liters of water on board. 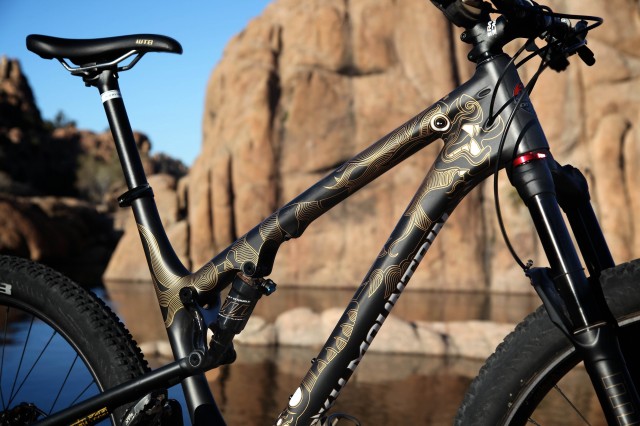 The gold and ivory graphics applied over bare carbon are simply stunning. The Nepalese Snow Lion motif, and the Sherpa name itself, are perfectly applied to the bike. The same graphic theme adorns the seat and rims. It’s a beautiful machine. 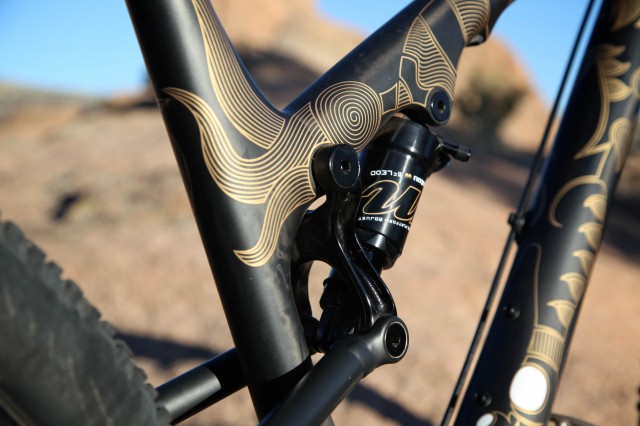 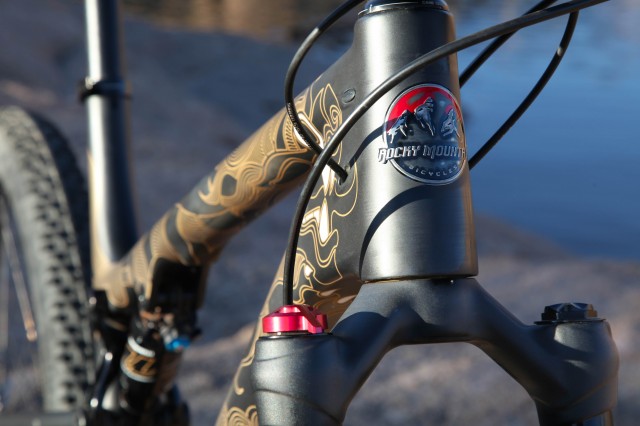 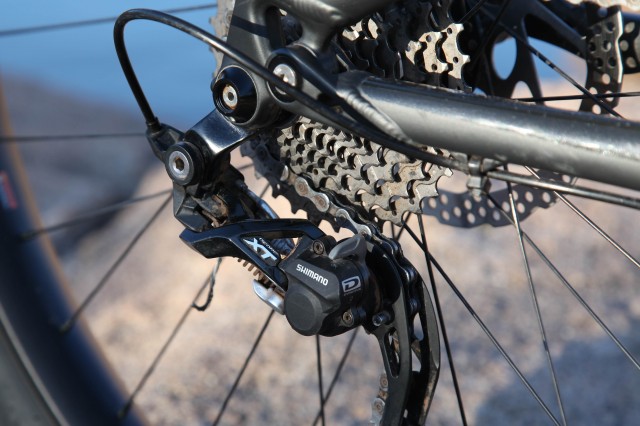 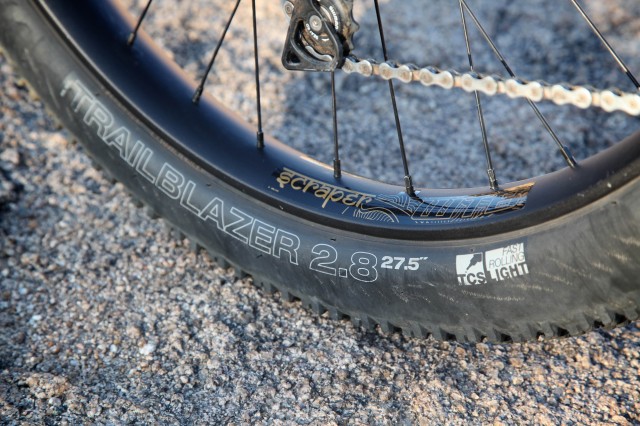 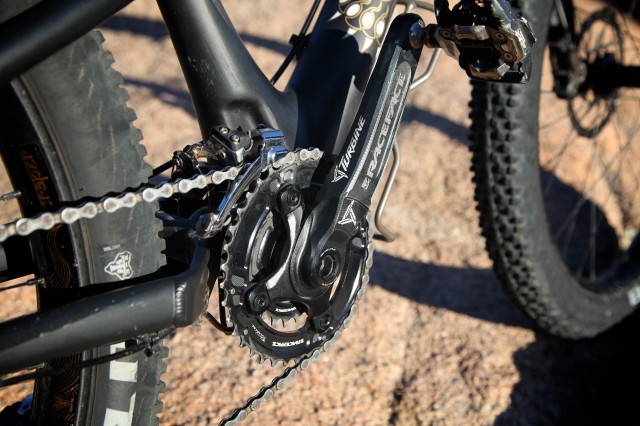 Testing on the White Rim Trail

Over the course of the last month, I’ve had the chance to ride the Sherpa on a variety of surfaces with and without a full load. In both scenarios the bike handled beautifully and delivered on its design promise. The plus-sized tires have just enough additional meat to add traction without feeling sluggish or lethargic. Steering inputs require far less effort than a full fat-tired bike, and the tires overcome obstacles as well as any 29er of the same effective outer diameter. Although it took some time to get dialed in against the optimal tire pressure, the front and rear suspension components suit the platform and allow for aggressive speeds in even the ugliest terrain. It’s a bizarre feeling to launch your bike and camping kit off ledges and burms, but the Sherpa does it with aplomb. The impressively short 445mm chainstay length certainly adds to the bike’s swift and responsive handling.

The real test for the Sherpa was to load it with all my gear and head out for a long overnighter. Rolling down the switchbacks at the start of the White Rim Trail, I made a few stops to adjust my suspension to accommodate the weight of all the water I had to carry. In all it was a crushing eight liters with three in the frame bag, one secured to the Blackburn cargo cage under the down tube, and four on my back. It was going to be a long 70 mile day, so I tuned the suspension for a nice plush ride knowing I wouldn’t suffer many excessively hard hits. By the eigth hour in the saddle, that compliant ride was worth its weight in cold beers as my back and sit bones suffered little. Despite rolling into camp completely exhausted, I was likely saved from ruin by the kind ride qualities of the Sherpa. 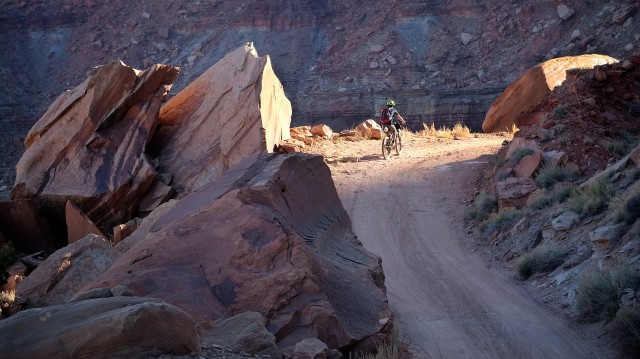 The riding position is upright and relaxed making for a comfortable all-day perch. 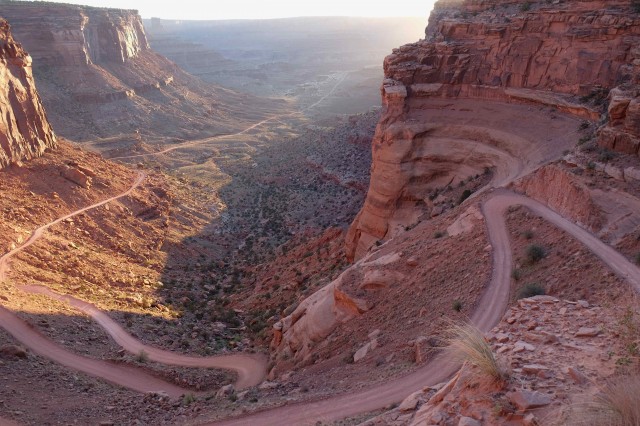 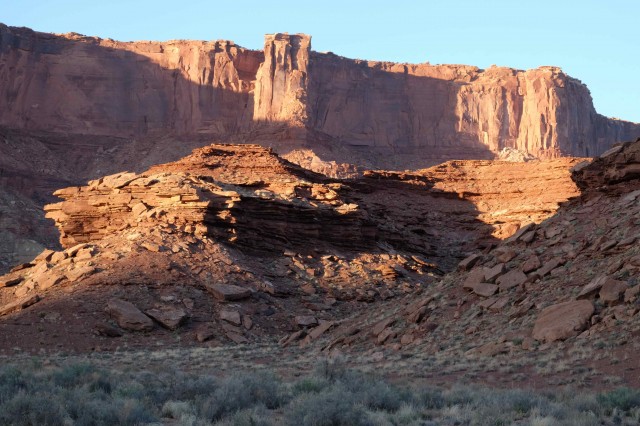 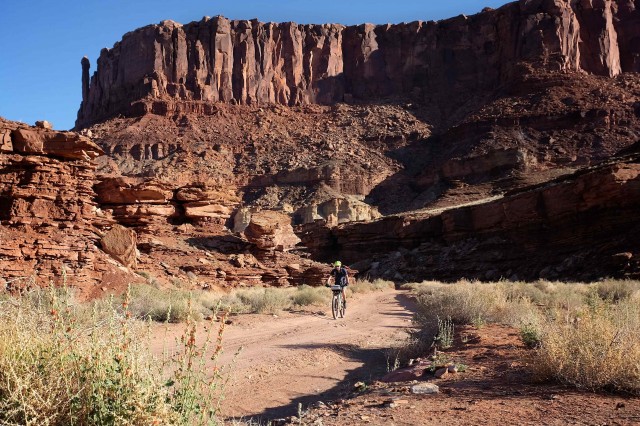 Plus-sized tires lend themselves to adventure riding where conditions tend to vary wildly from pavement to rock, sand, and whatever awaits around the next bend. 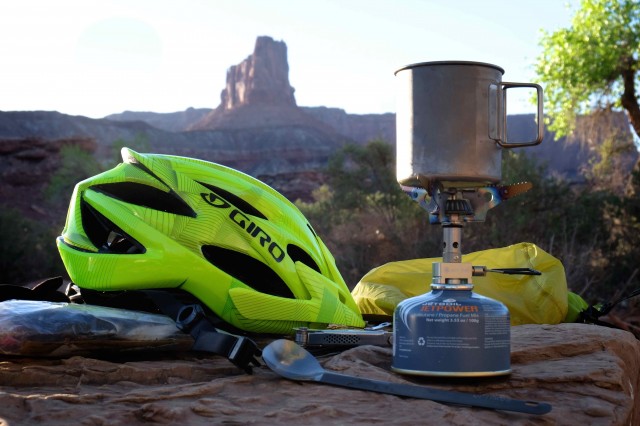 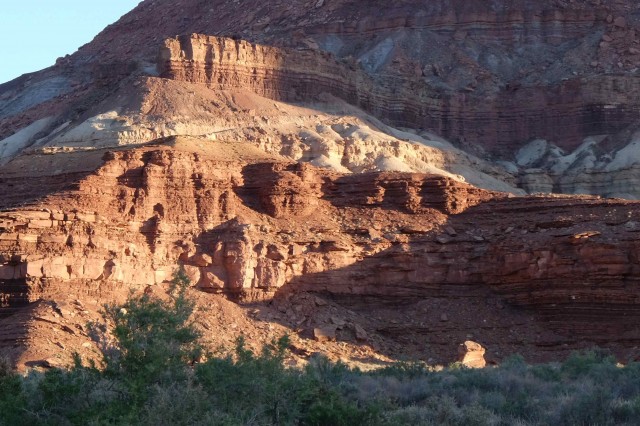 Day two was no easier than the first as miles of sand conspired to slow my progress. Removing nearly half of the air from my tires helped me traverse the worst sandy sections with little discomfort while the footprints of other riders ahead of me suggested they weren’t so fortunate. Rolling to the final section of gravel and pavement I topped off my Trailblazer tires to full pressure and rolled back to my car, 104 miles covered in under 28 hours with full load. Not too shabby.

After a few hundred miles atop the Sherpa and with one ambitious overland ride under my belt, I can find much to love about this bike, and few minor quips. The seat is perhaps too thinly padded for multi-day sorties and for more aggressive rides, I wish the tires had a bit more bite at the edges. My biggest criticism, and this could be filed under personal preference, is with the 2×10 drivetrain. The White Rim proved to me once again why I’m so fond of the newer 1x systems with one front ring. The rolling terrain had me shifting the front ring continually, which then forced me to shift the rear to adjust. I find I shift, well, twice as much with two rings up front.

As my muscles recover from my big ride in Moab, I find myself dragging my finger over more maps plotting out other places to take the Sherpa. In the meantime, I’ll strip it of its bags and gear and go rail my local trails. One bike to rule them all? Perhaps. 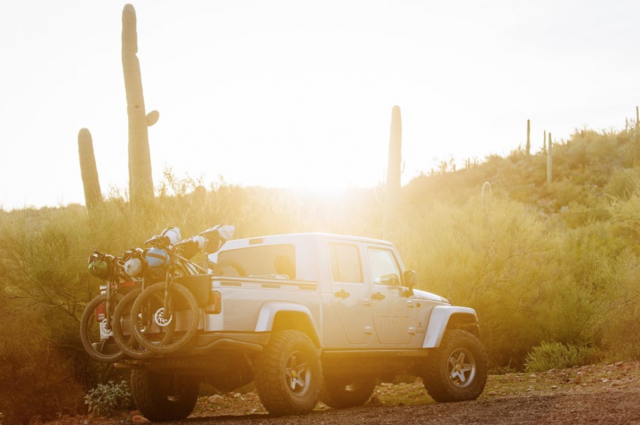 Testing the Sherpa near the Expedition Portal HQ on the Black Canyon Trail. Image: Margus Riga

Porcelain Rocket Bags: The custom fitted frame bag from Porcelain Rocket is a nice compliment to the Sherpa and maximizes the useful space in the main frame. The lower aspect of the bag affixes to the bike via the water bottle bolts on the down tube. The frame bag has one large compartment and one thin zippered pocket on the non-drive side. 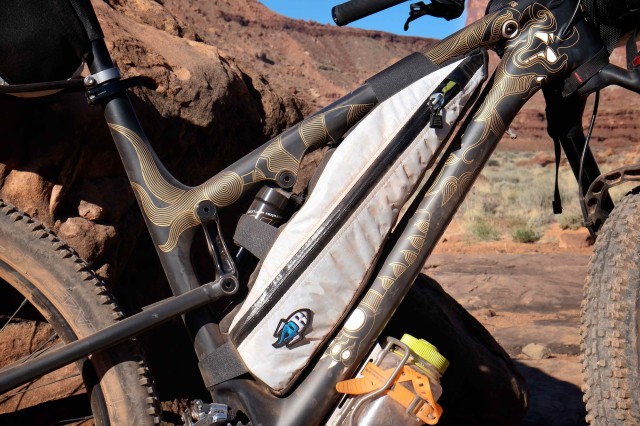 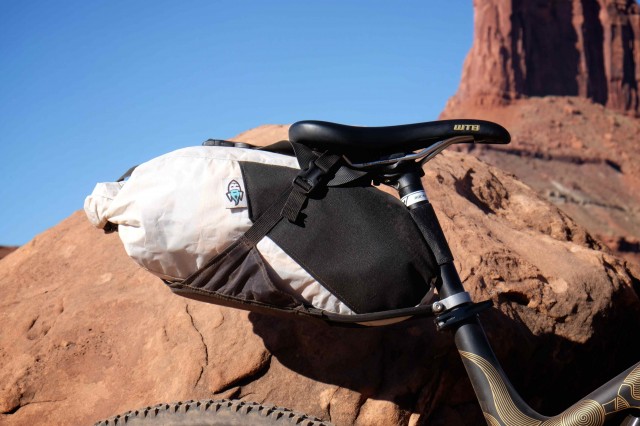 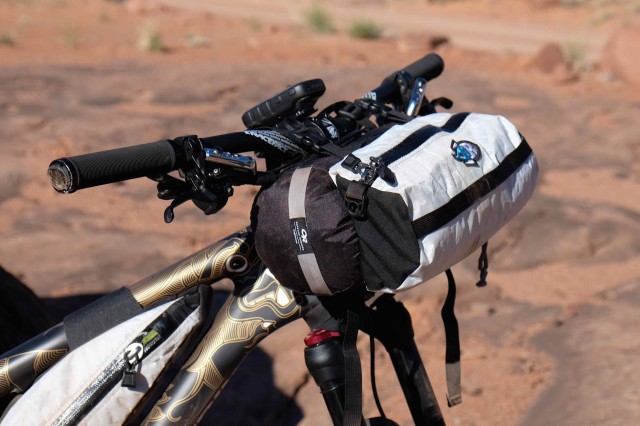 The seat bag employes a unique aluminum strut below the bag to keep it from wagging or slipping. It also allows the user to remove the back with the release of one buckle. That makes for easy loading and unloading at camp. The harness system for the bars is designed to secure any stuff sack or dry bag of your choosing. The additional pouch pictured above then secures to the harness. I found the system to be a little unrefined and it shifted and bounced more than I would have liked, but that is a minor grievance.