The Skotti grill was born of fisher and outdoorsman Christian Battel’s desire to enjoy freshly caught fish while adhering to open fire laws in the northwestern German city of Meerbusch. “Open fires in nature are rightfully only allowed under certain conditions,” he writes on the company website. “So, I had to reinvent fire somehow.” Fast forward to 2019, when Battel’s motto “Just. Grill. Anywhere.” became fully realized—the Skotti won the Red Dot Award in the Product Design category for its multifunctionality, light weight, and portable design. 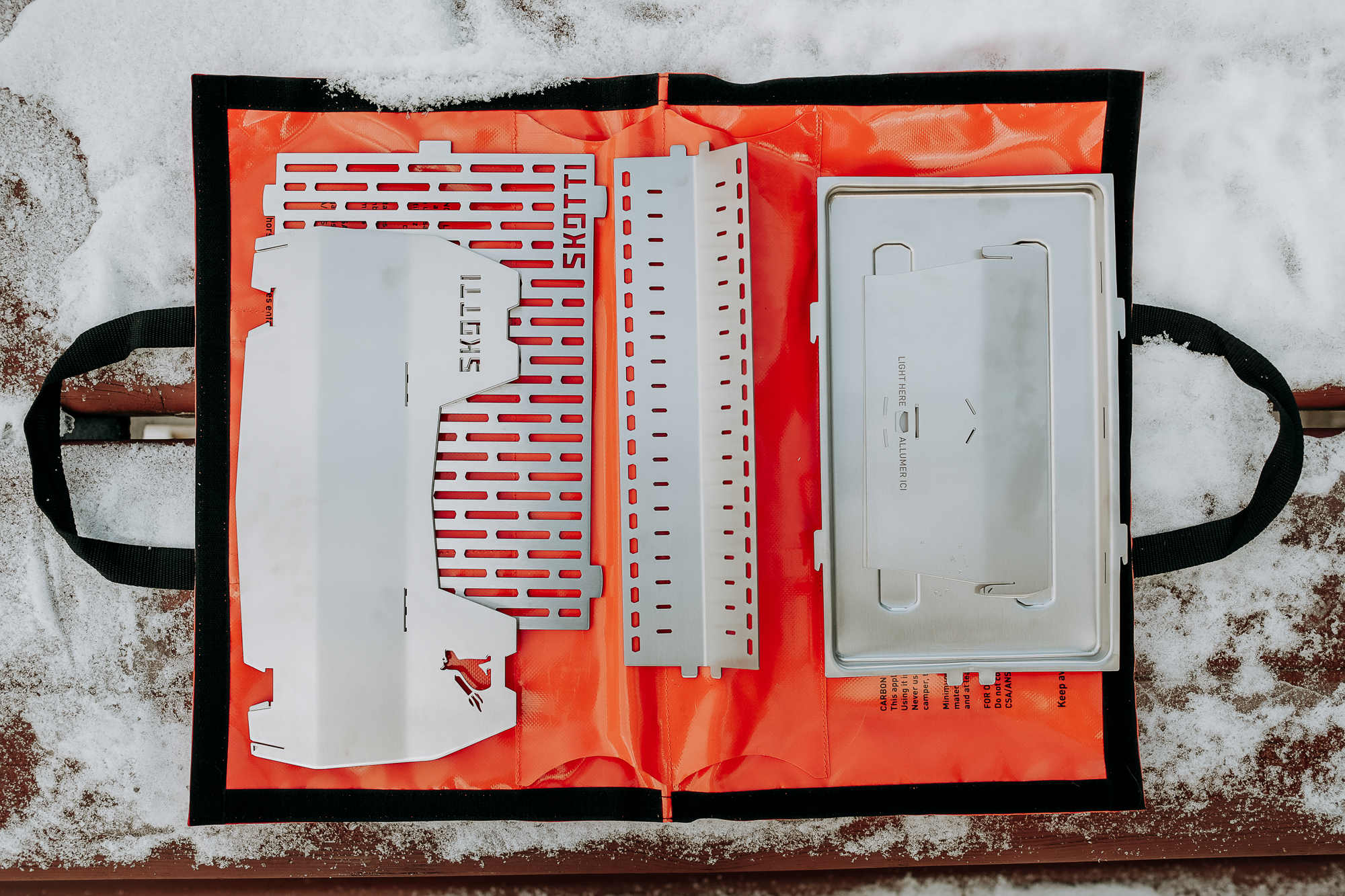 The 3.3-kilogram (7.3-pound) Skotti appears to be in a league of its own. There aren’t many (if any) stainless steel grills that are powered by a standard EN 417 fuel canister (propane/isobutane mix), wood, or charcoal, collapse to the size of a laptop computer, and are dishwasher-safe, including the tarpaulin carry bag. For the typical overlander, the grill’s attractiveness lies in its packability, light weight, ability to run on fuel you may already carry, and, of course, the fun factor. The minimalist design is also très cute, featuring cut-outs of man’s best friend, an homage to one of Battel’s former dogs named—you guessed it—Skotti. 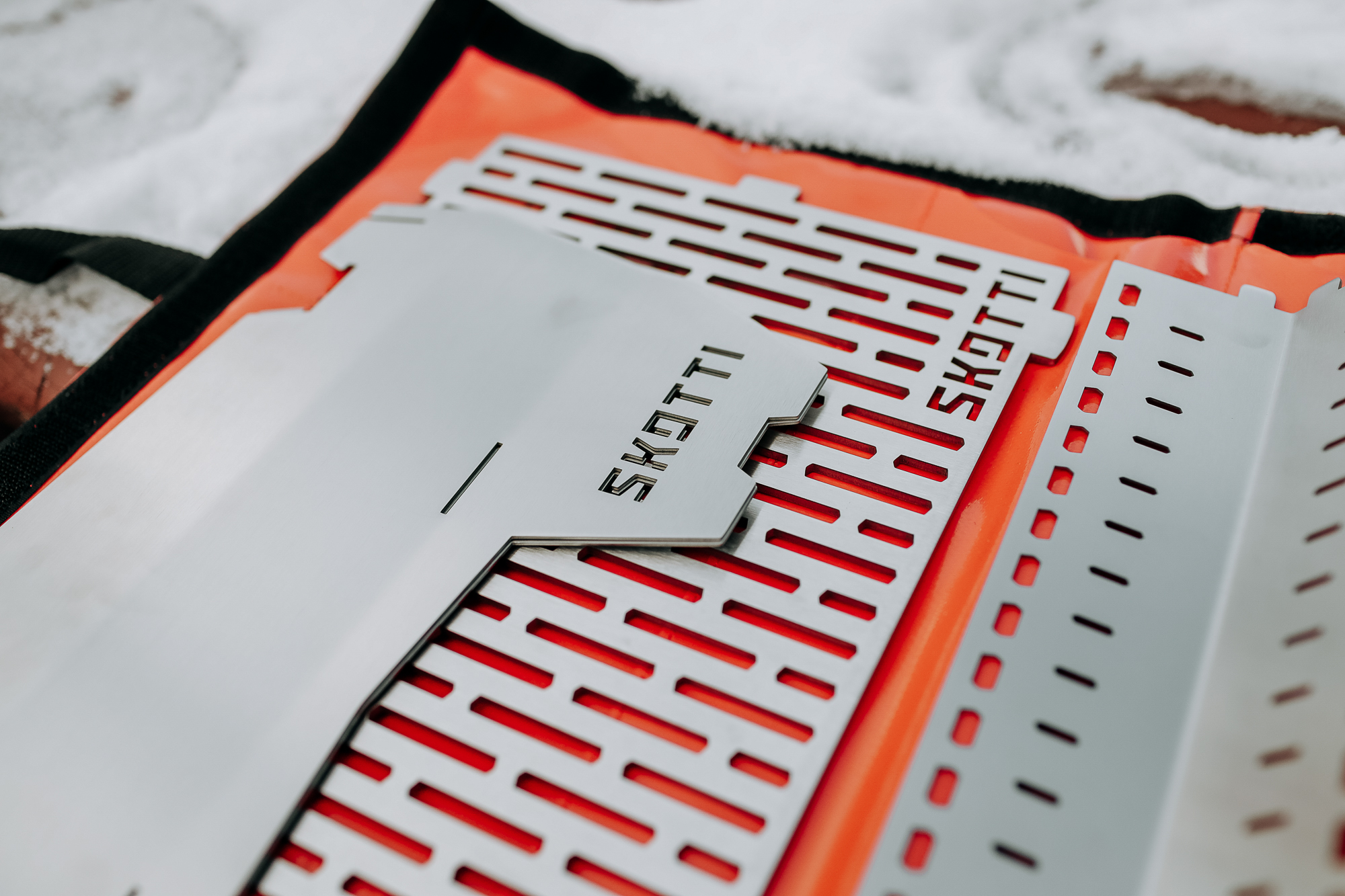 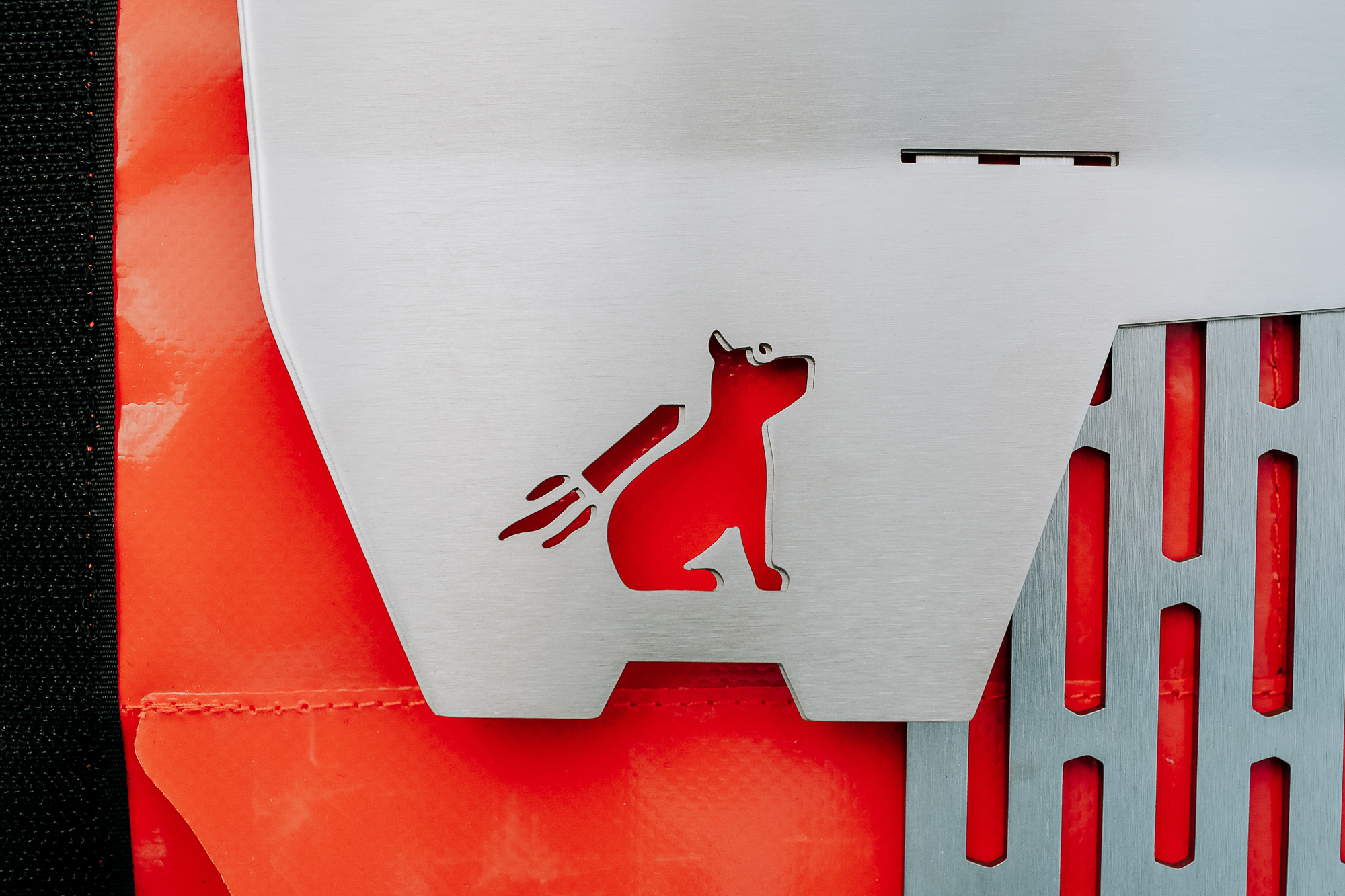 One of my favorite features is the grill’s modular design. It packs down flat, measuring 45 x 30 x 3.5 centimeters, and is quick and easily set up in under a minute. Each panel slides into the next, forming a stainless steel box with a burner tube, radiating plate, and grease drip tray in the middle, and a grill grate on top. Users should exercise caution while connecting the fuel canister (particularly during cold temperatures) as the thread depresses the fuel valve before it’s fully seated, spitting out fuel on unprotected hands. This is a common feature of many screw-on regulators, however. 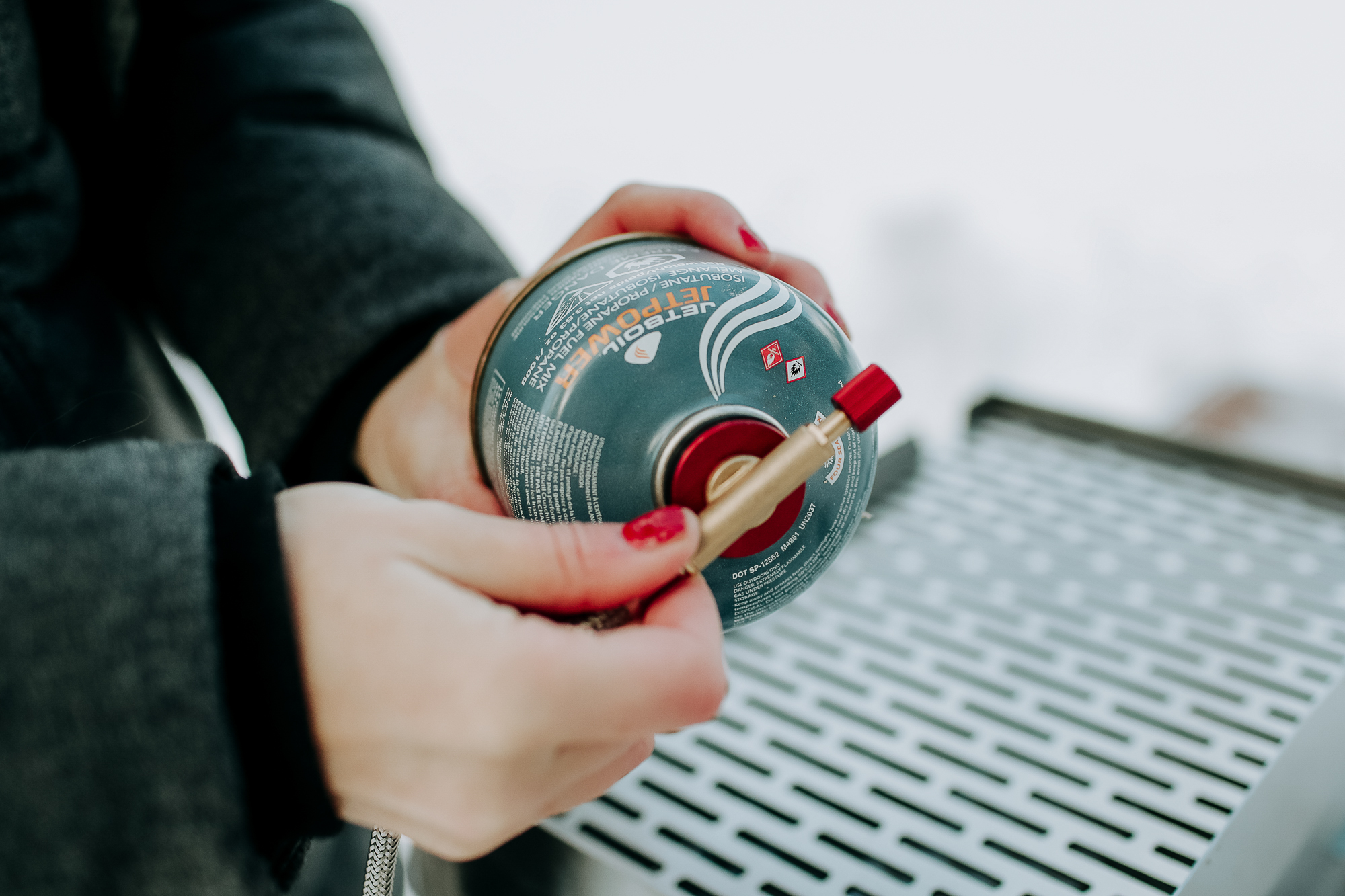 I found lighting the Skotti through the honeycomb-shaped ignition hole a tad tricky at times (especially when wind was present) but using a long-handled lighter and opting for the Skotti Cap should address this challenge. Once lit, the grill experience was enjoyable. The advertised two-minute preheat time rang true, while the grill’s feet remained cool to touch—a definite pro for any camp table.

I conducted tests at around 5°C and -5°C, and the grill performed far better at above-freezing temperatures, getting nice and hot and demonstrating the potential of its 14,000 Btus per hour. Skotti recommends using winter gas for colder temperatures, which I did, but using the grill in temperatures above 0°C should yield best results. 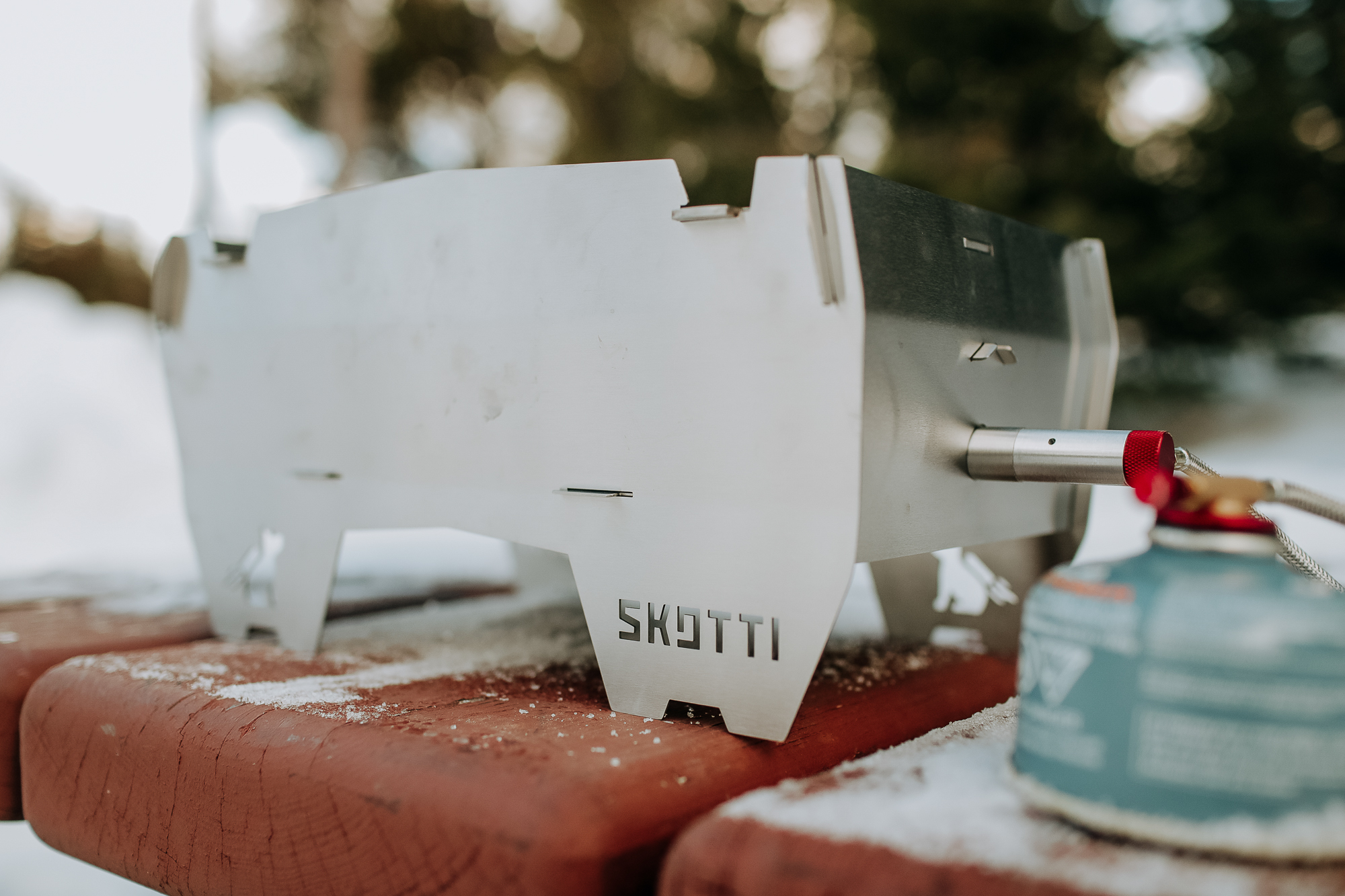 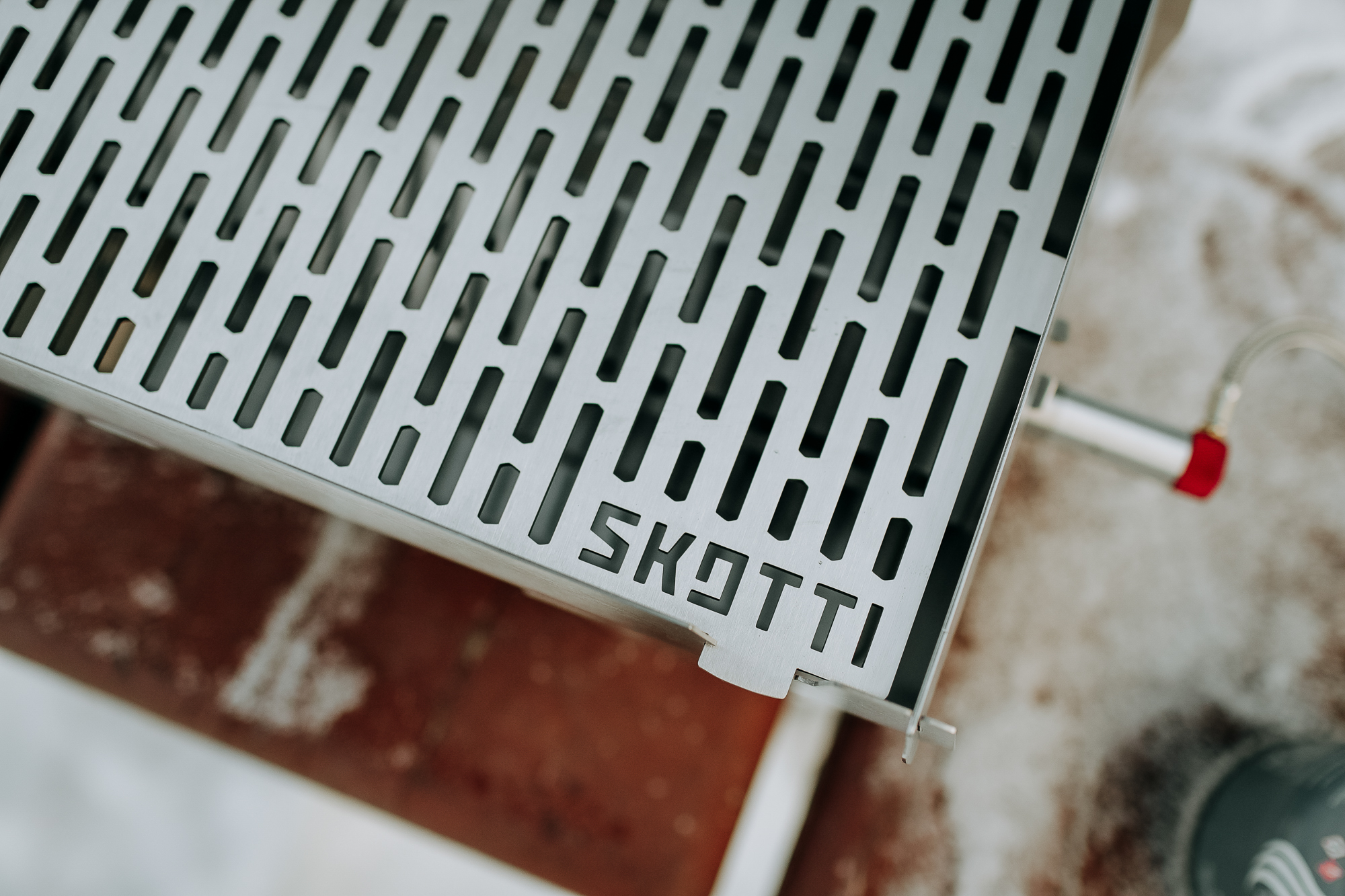 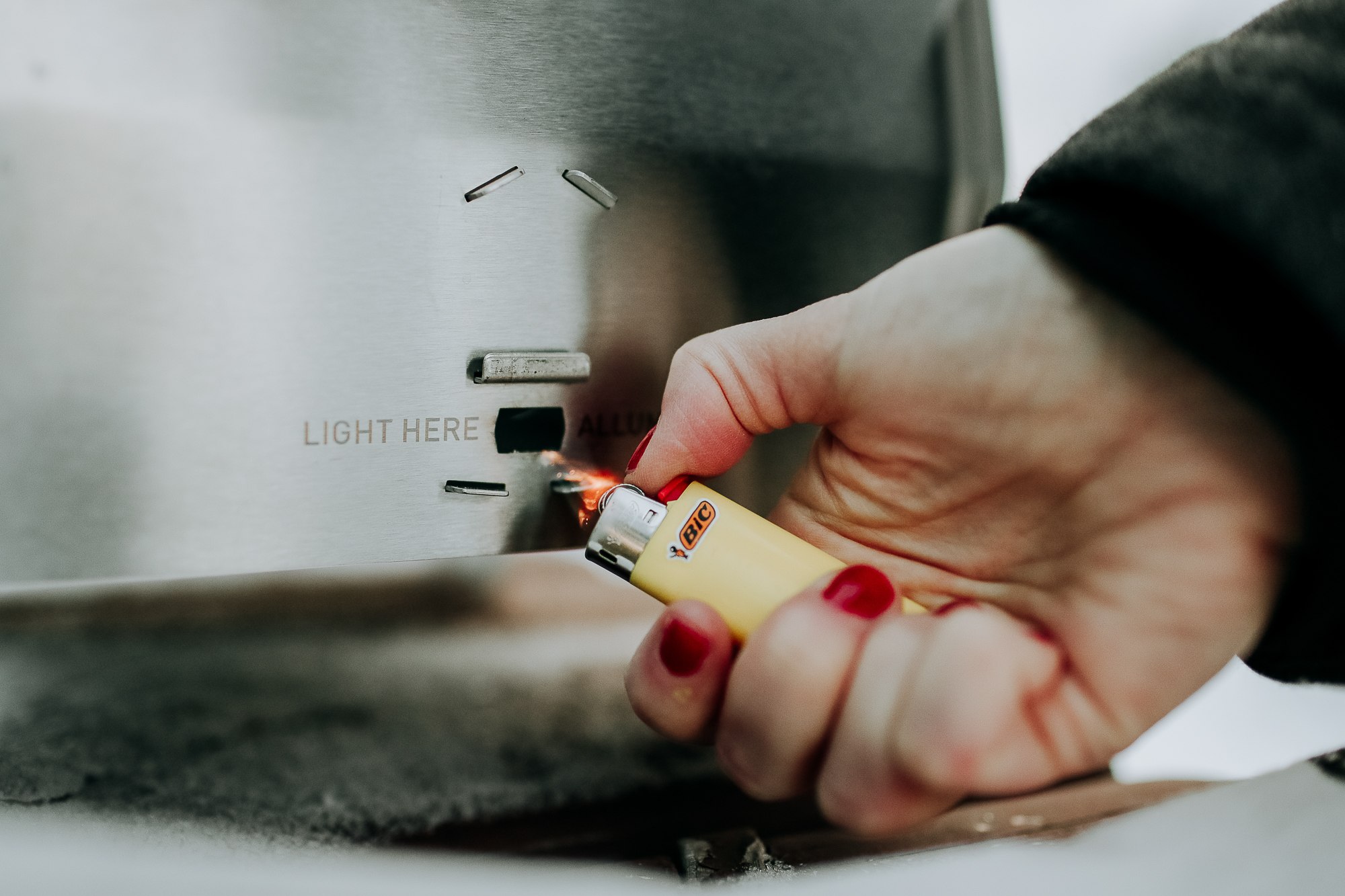 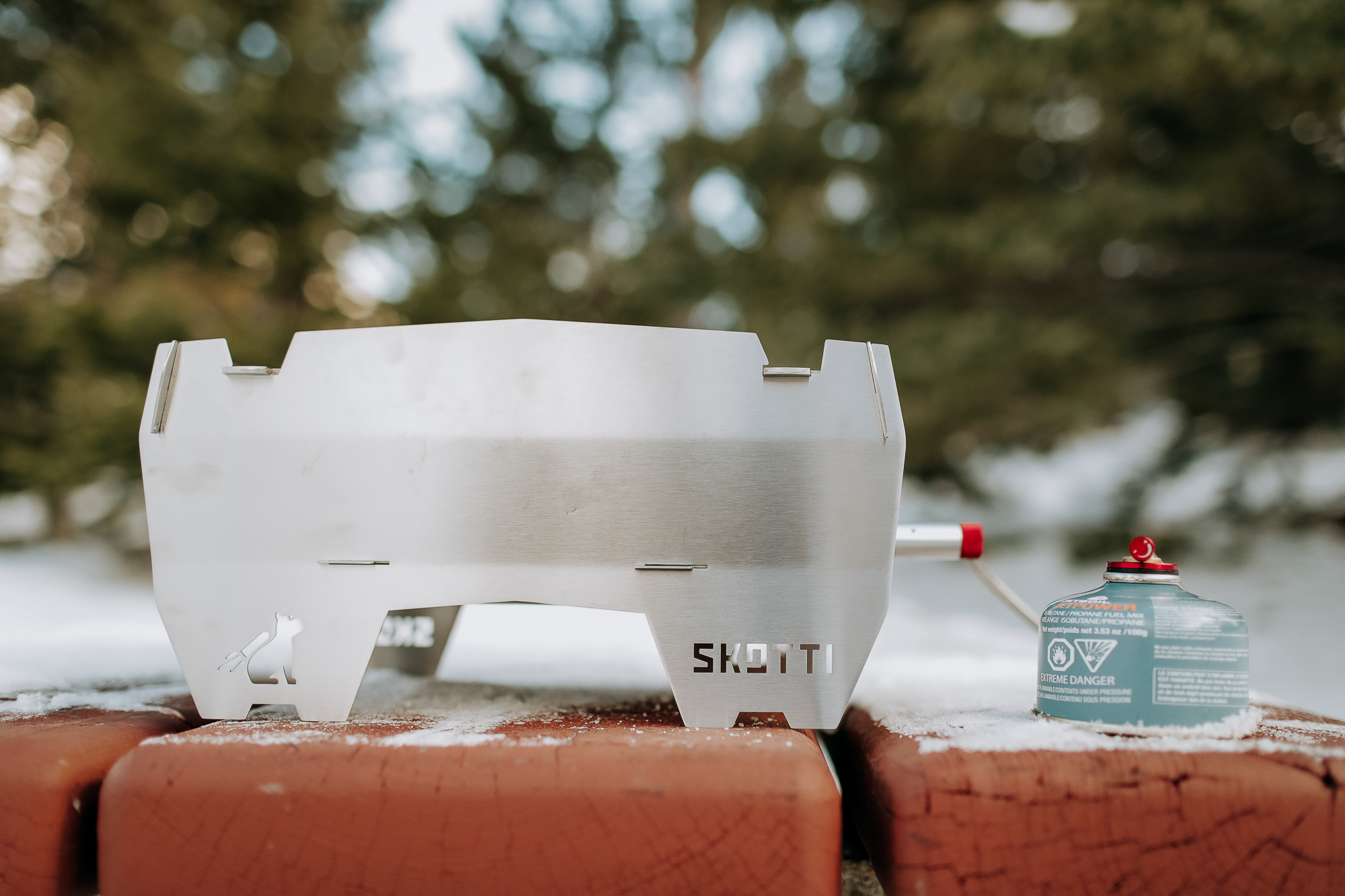 Twenty minutes later, the steel had cooled completely and was ready for packing after a quick wash. The Skotti manual suggests filling the grease drip tray with about 0.4 inches of water before lighting the grill, which made cleanup a cinch. Considering the price, ease of assembly, weight, packability, function, and looks, the grill definitely delivered. Plus, if you’re willing to tuck it into a backpack, I’m confident you could indeed grill just about anywhere. 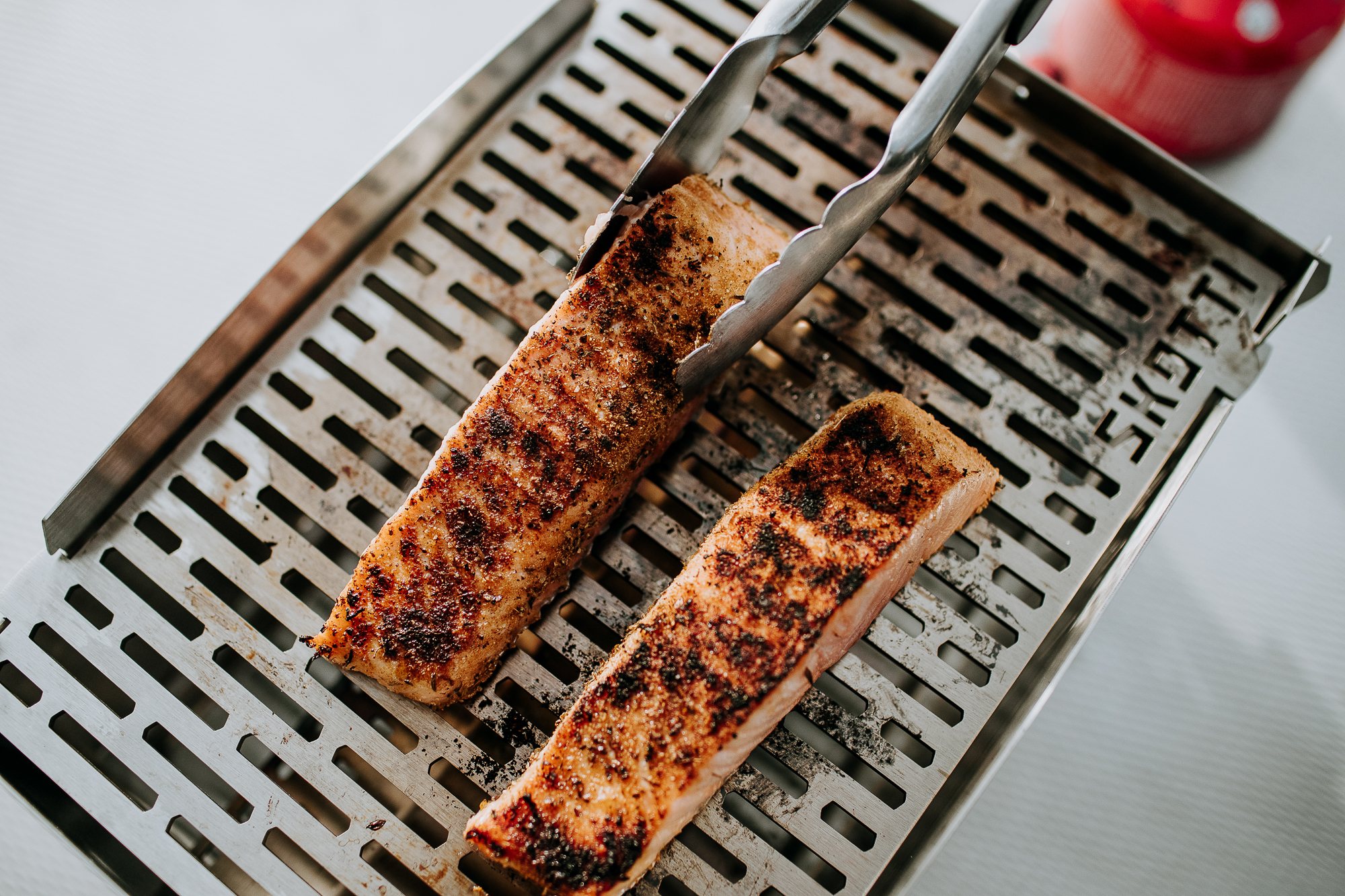 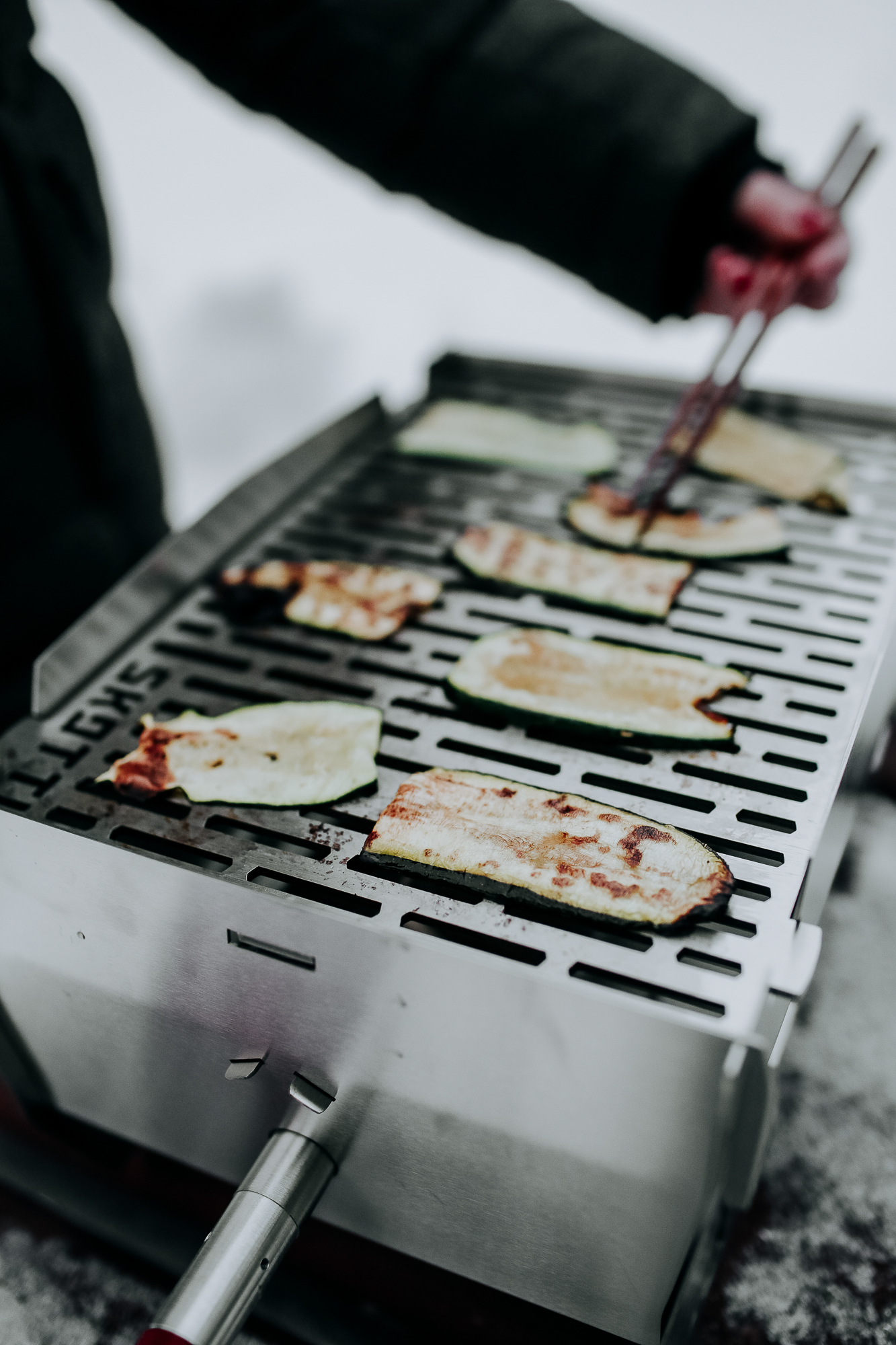 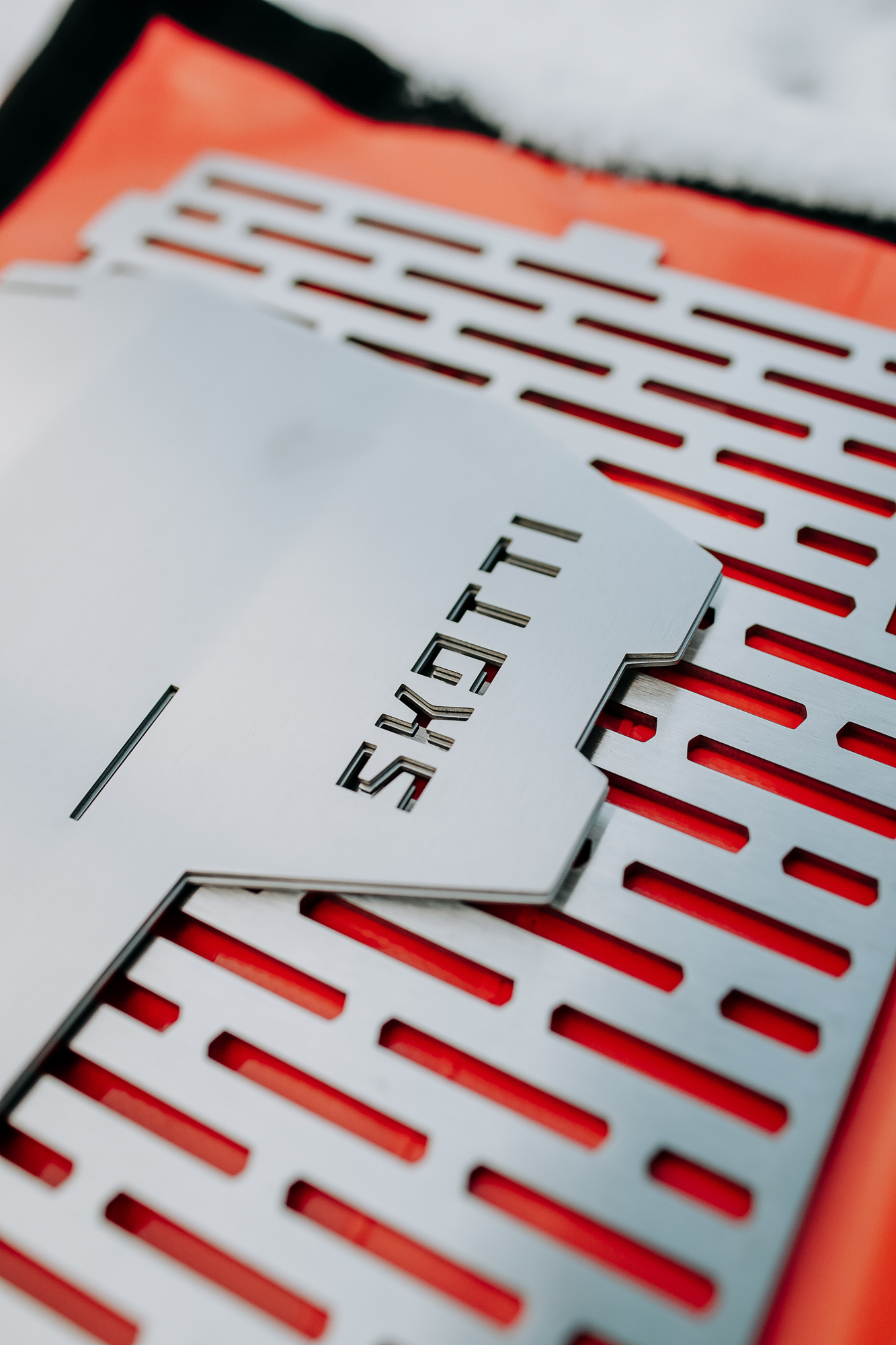