It might have been one of my favorite moments in the backcountry in years. I was seven days into the remote highlands of Iceland on my mountain bike on a self-supported trip. As I set up my tent in a campground high on the flanks of a volcano, three Swedes approached me, each of them handing me an ice cold beer. It was awesome. Nothing tastes better than beer when you have really earned it.

Because I doubt I’ll ever be so fortunate to encounter such generous hop-gifting Scandinavians again, I started looking for solutions. I’m fond of hard spirits, but sometimes it’s a beer I crave, maybe even a bubbly soda. Thanks to Pat’s Backcountry Beverages, I think I may have found the scratch for my itch.

The best way to describe Pat’s, is to say it is a unique drink system that allows users to mix highly concentrated drink syrups and then carbonate them in a proprietary bottle system. Think of it as the beer or soda equivalent to the dehydrated backpacking meal…only way better.

The drink concentrates are only 2.1 ounces in total weight, almost the same size as the GU packs all athletes know and use. Each packet produces 16 ounces of beverage. Those drink concentrates are available in two beer varieties and five soda flavors. The beer concentrates are not just beer facsimiles, they produce actual brews with up to 6.1% alcohol by volume. As a dedicated journalist, I felt an obligation to test them both, more than once just for good measure, but I’ll get to that later. 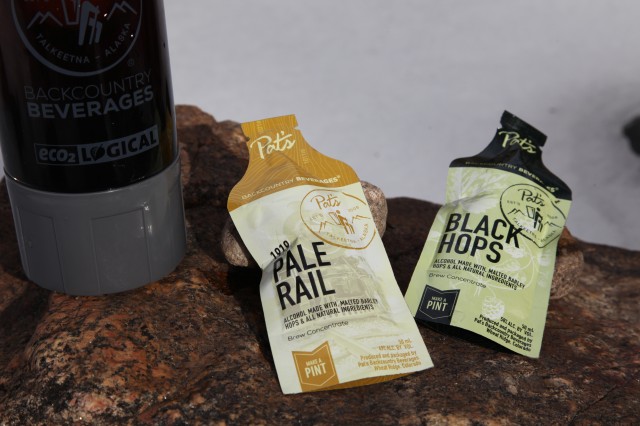 To use the system takes all of a few minutes. The bottle consists of a large main chamber, a lid with a small pump and lever, and an internal carbonation chamber. It’s a fairly simple system. The drink mix is added to the main chamber, and then a packet of carbonizing powder is added to the smaller inner chamber. With a few pumps of the lever on the lid, and a few shakes, the beverage is mixed, bubbling, and effervescent, just like your favorite beer or soda. So, how does it taste?

To be very honest, it tastes pretty darn good. Not to be overly critical, it probably won’t win any awards, and the ubiquitous beer snob would probably recoil at the notion of beer concentrate, but it is highly drinkable. I tend to prefer the Black Hops over the Pale Rail, but I realize I’m also being a little finicky myself. I’ve found the key to enjoyment of Pat’s beers is the use of super cold water. It seems to amplify the drink quality when the water is as close to 40ºF as possible. The beers do have a rich mouth-feel and viscosity, something that surprised me above everything else. The carbonation is what you would expect of a good micro-brew, and while the flavor has a bit of a unique quality, once in the backcountry, it really does hit the spot. 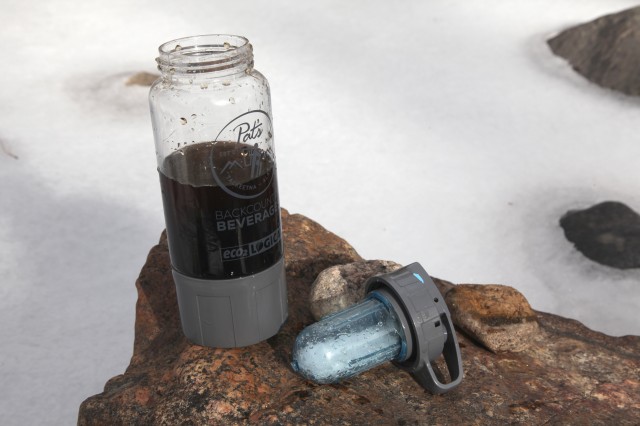 I’ve found I really like the root beer as much as anything, and it pairs well to my dehydrated meals making for quite an excellent end-of-day dinner experience.

For what it is, it’s really slick. For those of you traveling in a 6,000 pound truck with a 50-quart refrigerator, this may not be a worthwhile addition to your glamping arsenal, but for those of us cutting off our toothbrush handles to save a few grams, Pat’s Backcountry Beverages are quite a luxurious addition to an otherwise austere camp. I can say I won’t be venturing far from home without my Pat’s kit. Bottoms up!

This is one of those Christmas gifts to put on your list, by the way.

$50 for bottle and sampler of soda. $9 per four pack of Brew Concentrates and $6 for the activator packets. 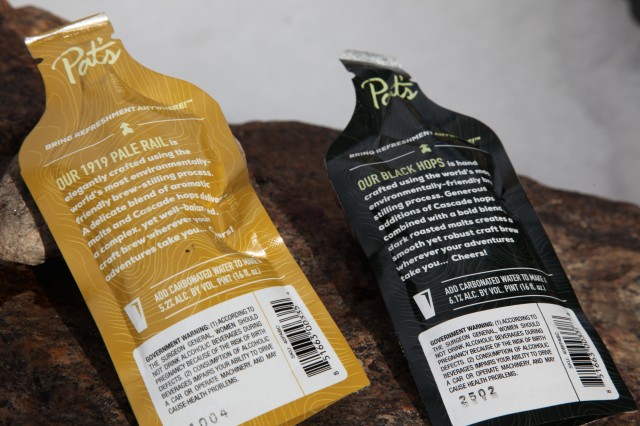