The designers at Nemo Equipment love a challenge. After reinventing the solar shower with their pressurized Helio system, it was only a matter of time before they tackled the privy problem. Most shower tents are terrible things made of poor quality materials in less than optimal shapes. If they’re not hard to pitch, they’re impossible to use and seldom live very long. When Nemo set out to develop their new Heliopolis, they didn’t recreate the wheel––they just made it better.

Unlike similar products, Nemo committed to a few extra ounces because they wanted their shower shelter to stand strong. The four-sided architecture is supported with large diameter steel poles joined at a welded steel hub. It was a smart and necessary decision as aluminum and fiberglass poles have historically proven of little use in such applications. 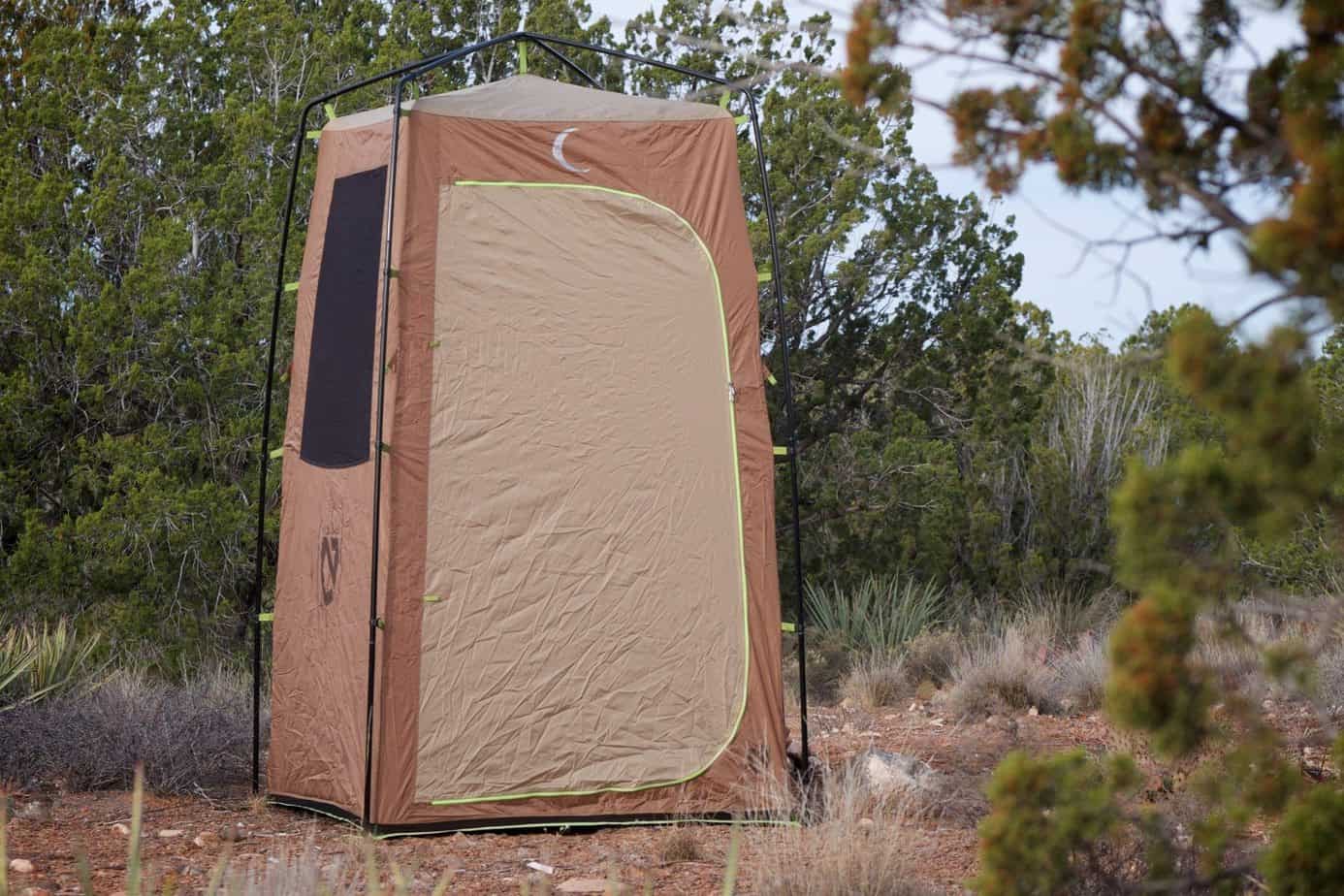 From a distance the Heliopolis is impressive, but it’s only when you get up close the many details become evident. I’ve spent a little time with the Nemo team at their HQ in New England and witnessed first hand how they scrutinize every tiny and seemingly trivial element. It’s obvious they invested a lot of time in the field testing and tweaking the Heliopolis.

With a peak height of 84-inches, even the tallest campers won’t feel cramped and the 48-inch square footprint provides ample space to move about and easily accommodates Nemo’s pressurized shower kit. The floor is constructed of heavy HDPE fabric for durability and the entire perimeter of the lower edge is banded with a strip of mesh fabric to allow water to drain in all directions. In my tests, I also noticed the exposed mesh helped the floor dry quickly. It also keeps water from pooling in corners. Nemo had the smarts to keep the mesh strip as small as functionally possible because, well––no peeking! For campers who prefer a more al-fresco experience, a large mesh window can be opened to pull more air through the shelter. 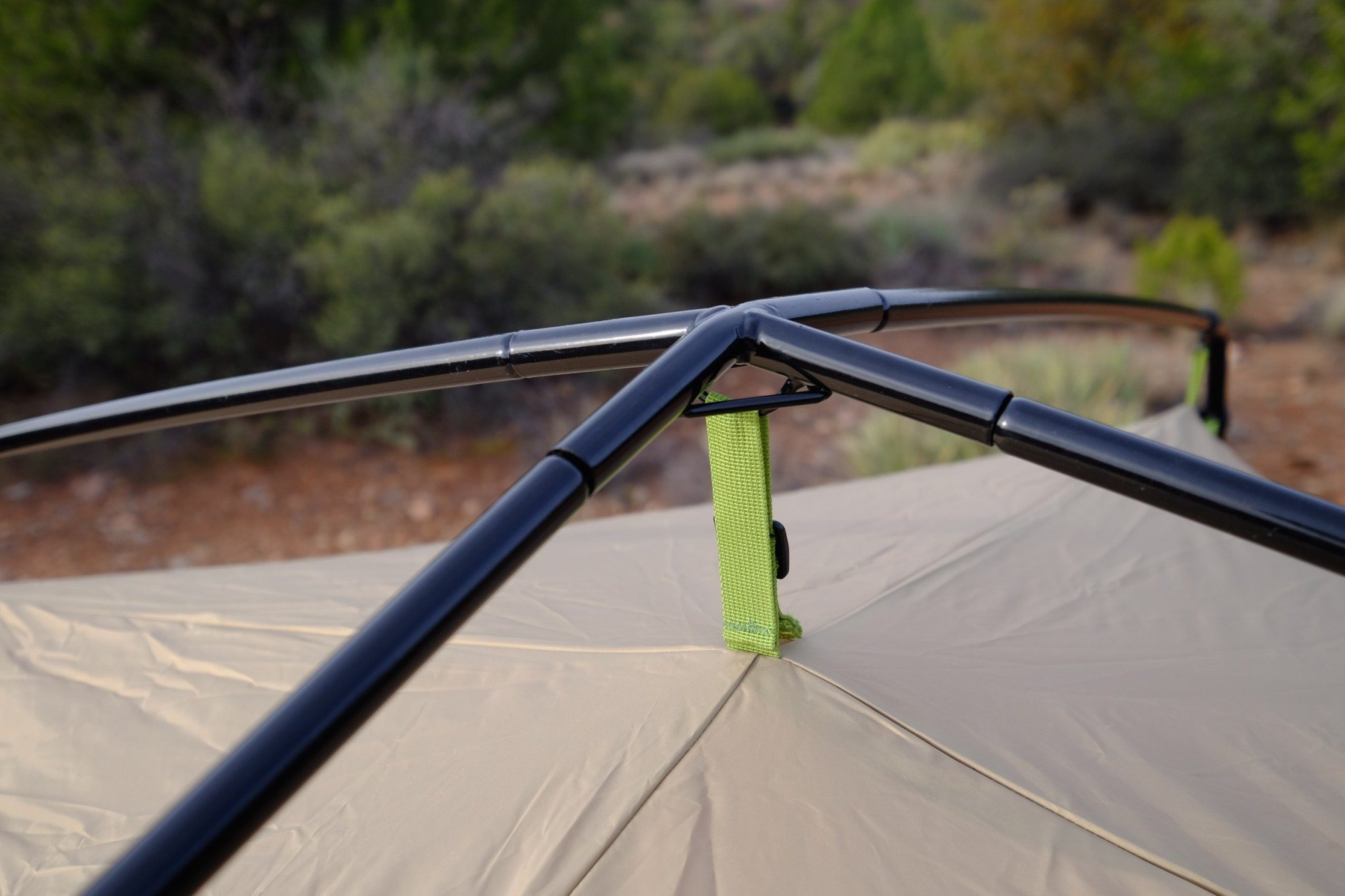 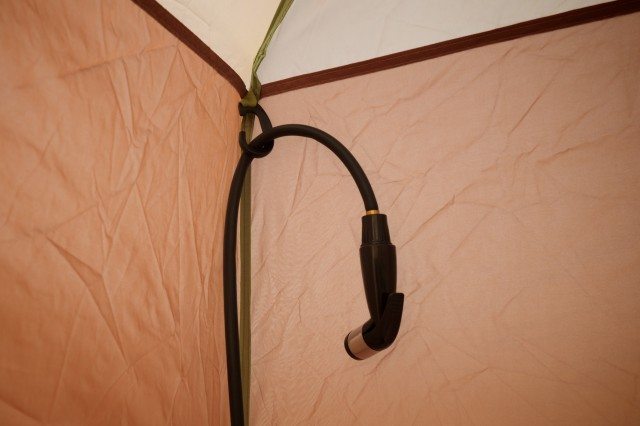 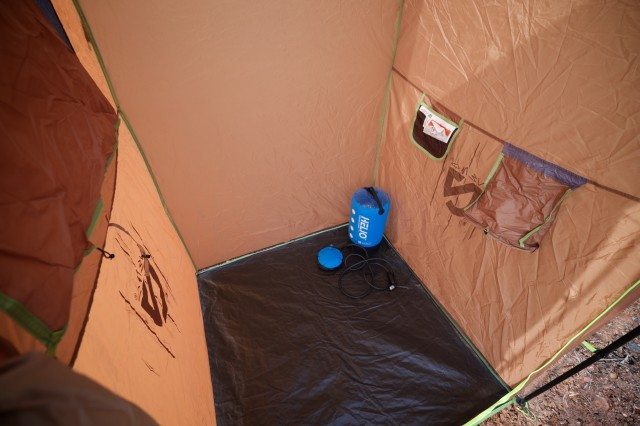 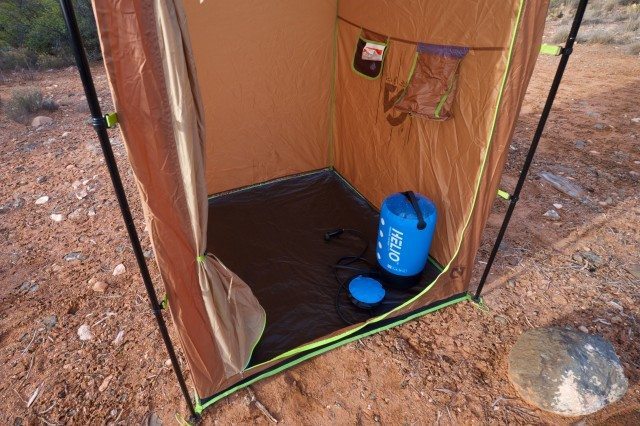 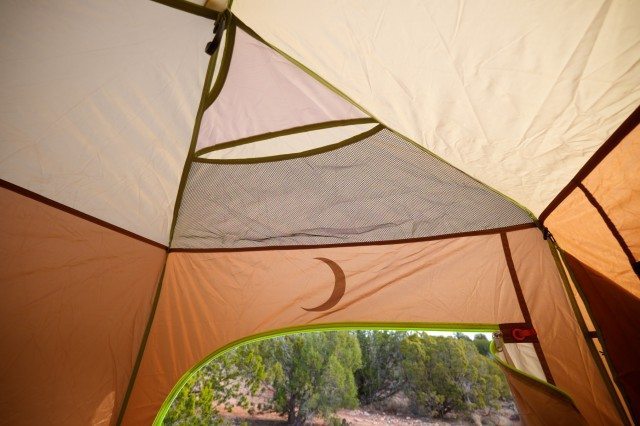 Inside the Heliopolis a mesh overhead pocket holds toiletries and towels and a shower-keeper tab at the upper corner offers a hands-free scrub down. There’s even a light pocket at the inner peak for midnight washes. A lower mesh pouch is conveniently placed for soap and shampoo and the door zipper includes a locking loop on the inside because again––no peeking!

I never for a moment doubt the creative force behind the Nemo team and not all of their energy is aimed exclusively at functionality. They injected a pinch of style to the Heliopolis by adding hints of wood grain printed with the logo graphics and a faux moon window above the door, both intended to give it the look of an old-time outhouse. For campers using the shelter for that purpose, the moon over the door is reflective to make the Heliopolis easier to find during late night nature calls. The toilet paper dispenser is enshrouded in a waterproof pouch as to not get soaked when the shelter is used as a shower. 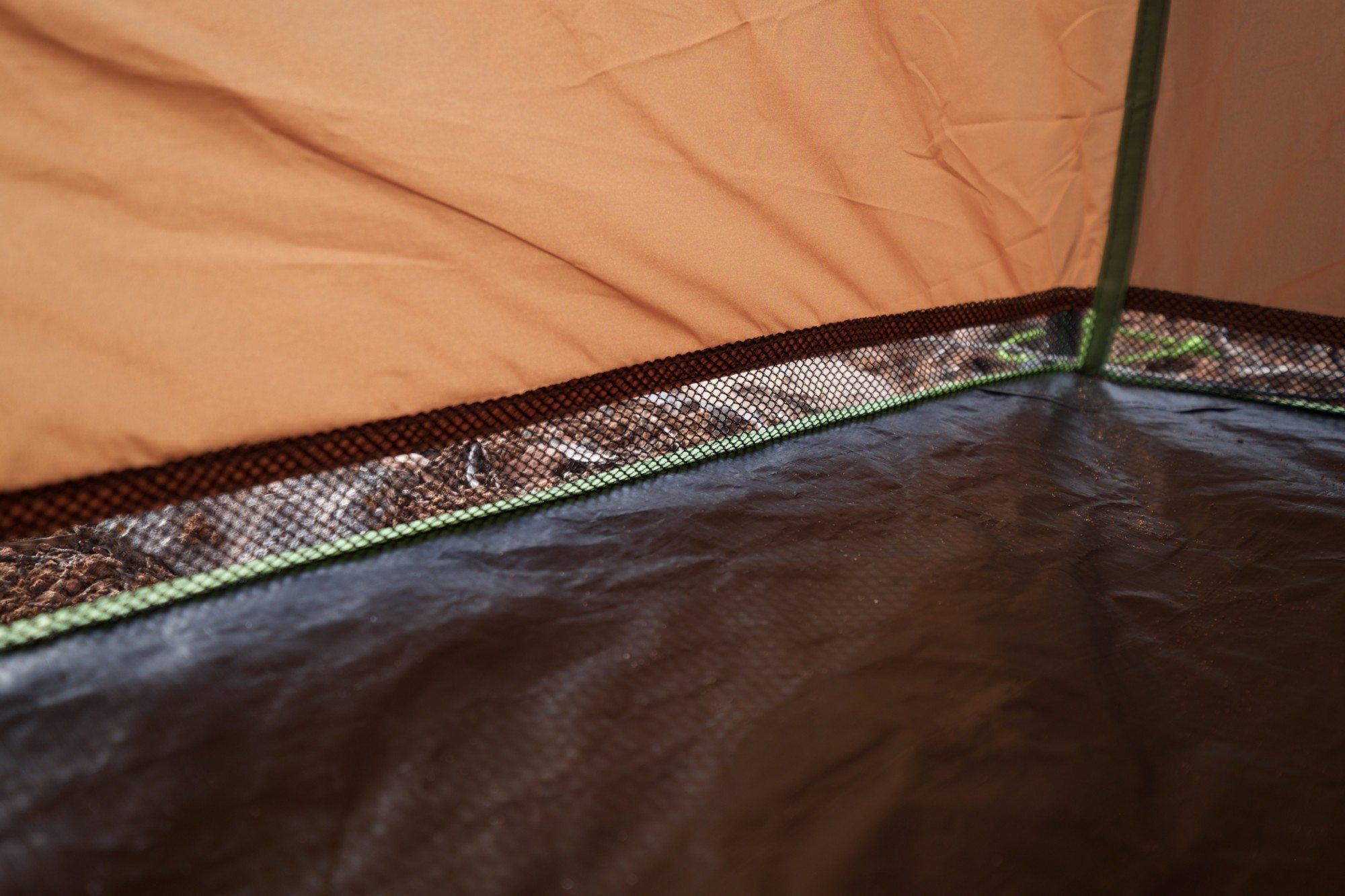 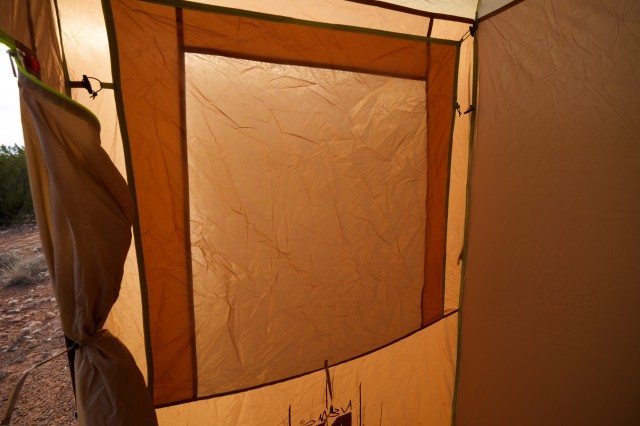 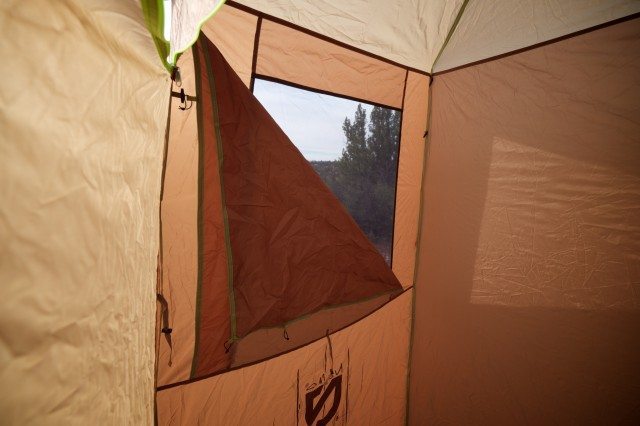 As well appointed as it is, it was the setup and stability that won me over. The pole sections go together quickly without any fussing and stand tall when fully joined. A solo set up can have the Heliopolis pitched in a handful of minutes with no fussing or hair pulling. It’s a little tricky for shorter campers due to the height of the central hub––but not impossible. Once the poles are assembled, the tent body secures to the poles in a matter of seconds via a handful of clips. The kit includes steel ground stakes and strong guy lines. I imagine when fully anchored, the Heliopolis would survive the desert winds of Moab, and I’ll find out soon enough come spring.

I’ve never been one to portage a privy on my escapes, opting to duck behind a tree or truck instead, but the Heliopolis has earned a spot in my car. It was certainly a big hit with my wife. Given its thoughtful features, steel structure, and quality fabrics, the $150 asking price is a no-brainer. Why would anyone buy any other shower shack? – CN 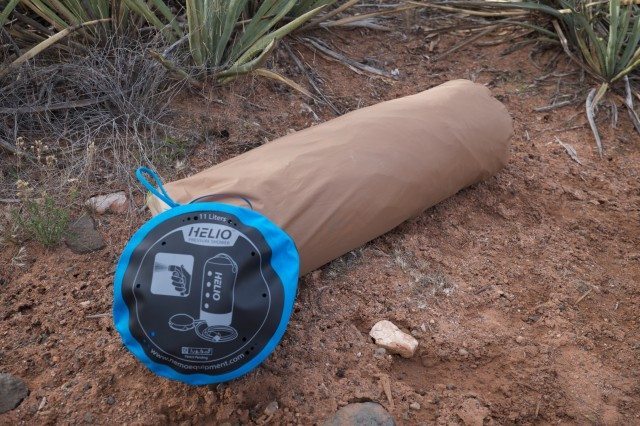 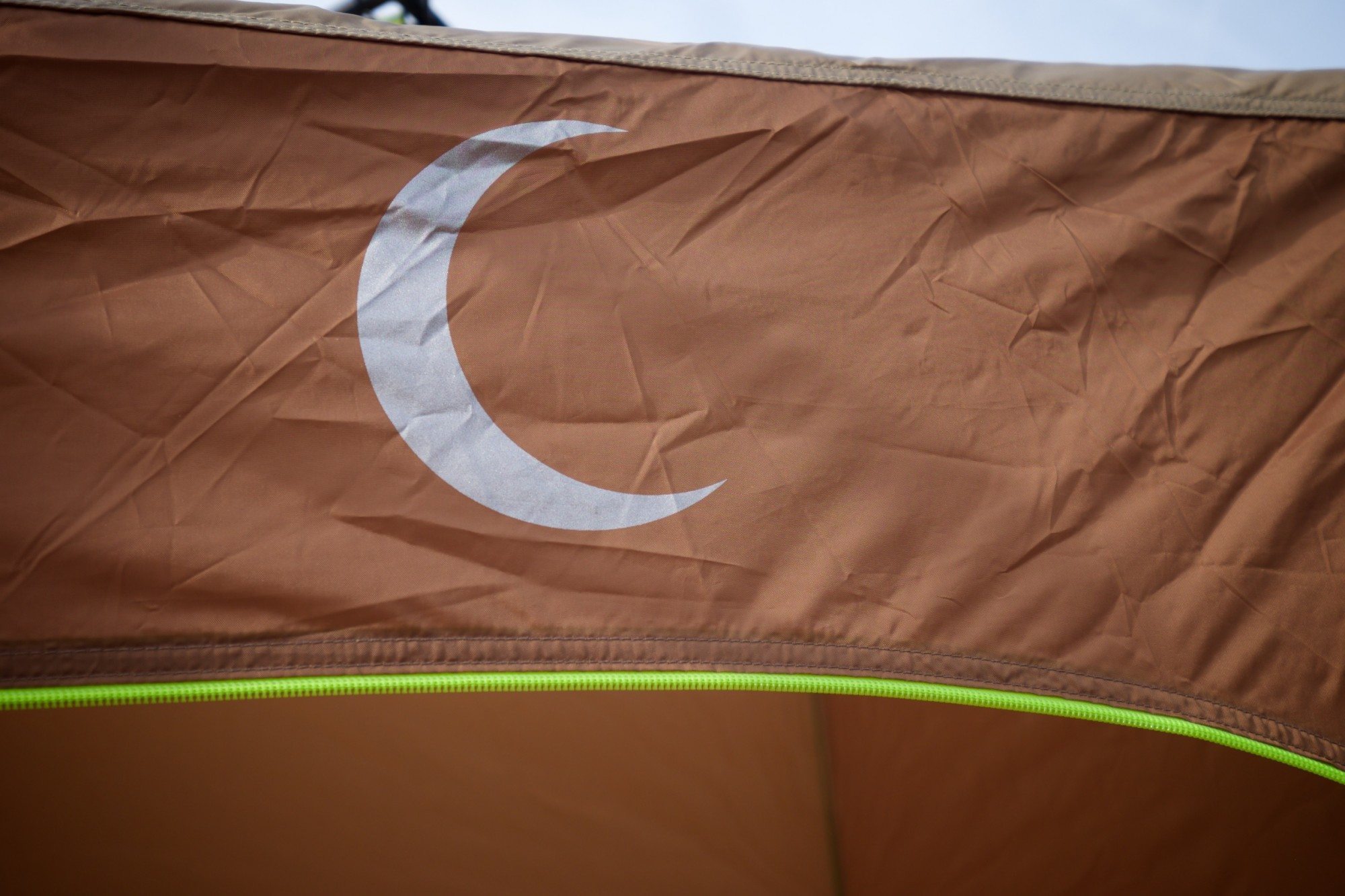 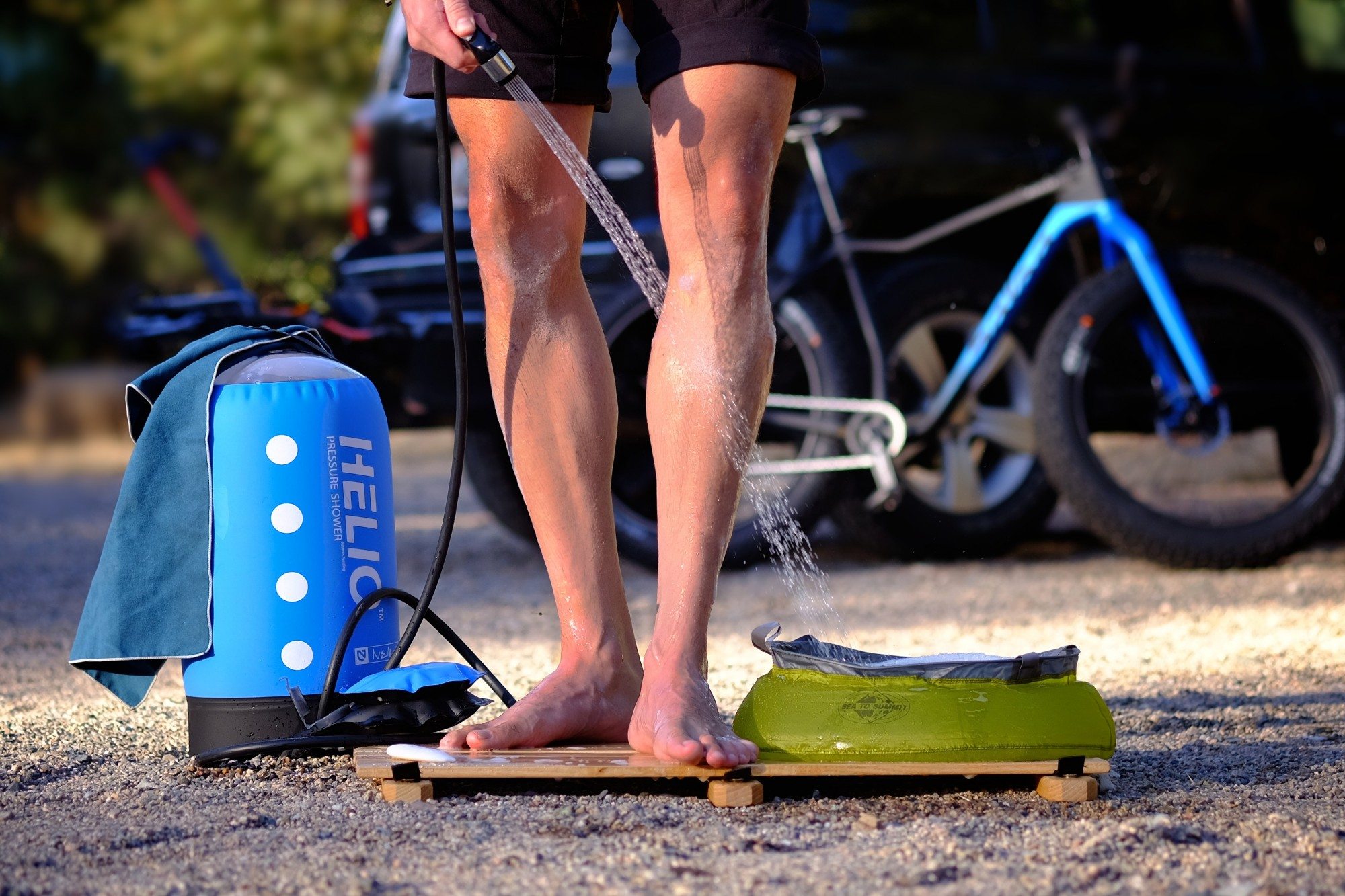 The only shower system of its kind, the Helio is one of the most ingenious designs I’ve seen in years. I get the feeling the Nemo crew put a solar shower on the table and set out to count the many ways in which they hated it. Then they made it better. The Helio affords all of the benefits of bag shower without any of the irksome drawbacks.

Like a traditional solar shower, the Helio is highly portable and packs into a compact and light bundle weighing only 1 pound, 9 ounces. It holds 2.9 gallons and can either be filled with pre-heated water, or allowed to warm in the sun. Unlike a normal bag shower, you don’t have to hang it over your head, a project that has foiled many a shower. Try finding an 8 foot tall tree branch in the desert, or better yet, try hanging a wiggly 40 pound bag of water from that branch. The Helio solves that conundrum with one clever feature––a foot pump. 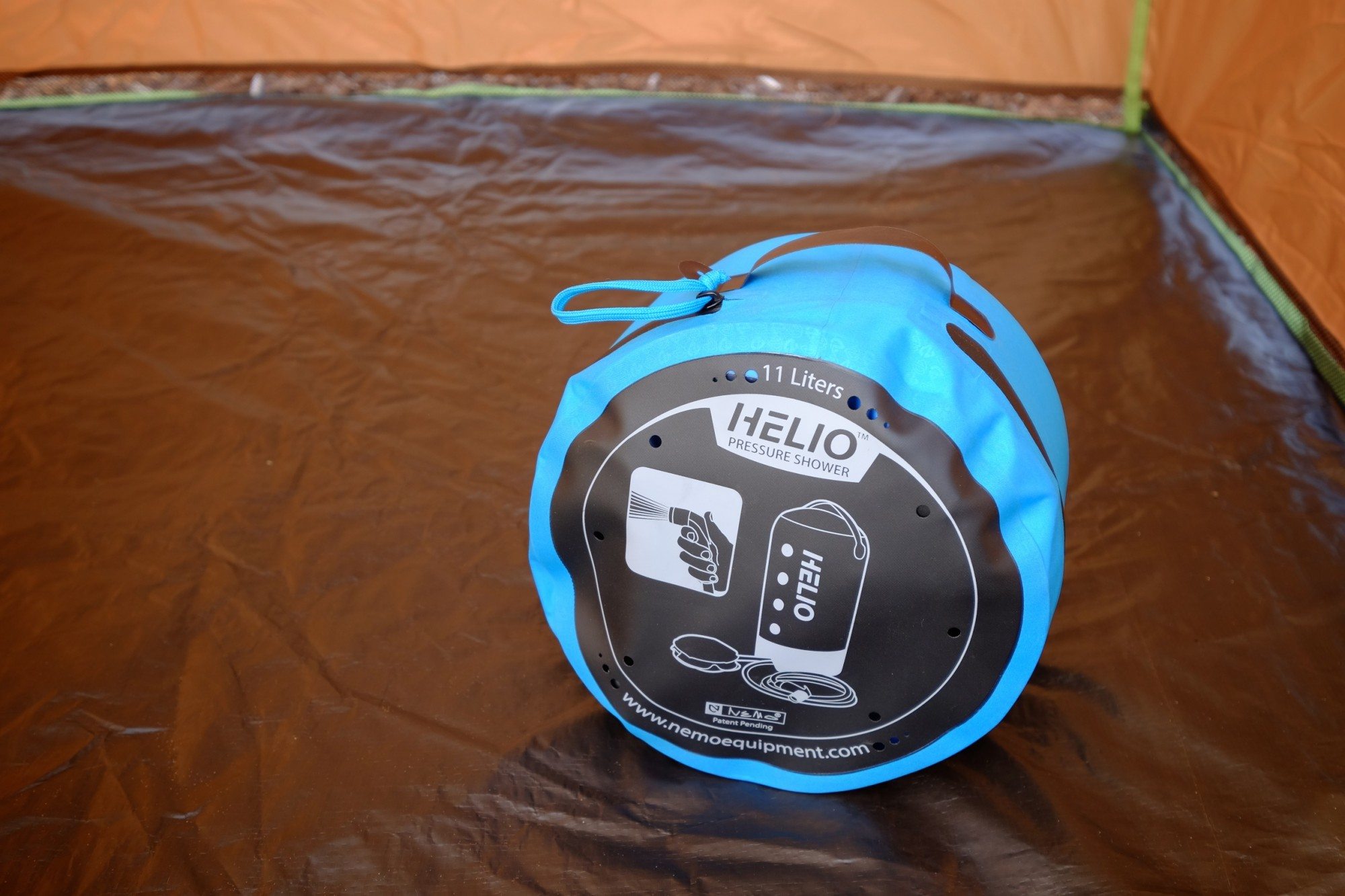 Once the Helio is filled and the cap secured, a few quick stomps on the soft foot pump brings the container to pressure. The lever-actuated shower nozzle is attached to a heavy-duty, yet pliable 7 foot long hose. No more crouching down under a low hanging bag of water. The pressure can be easily maintained with an occasional pump during the 5-6 minutes of steady water flow. Once again, our chief shower tester, my wife, found the pressure sufficient to quickly rinse shampoo from her thick red hair. 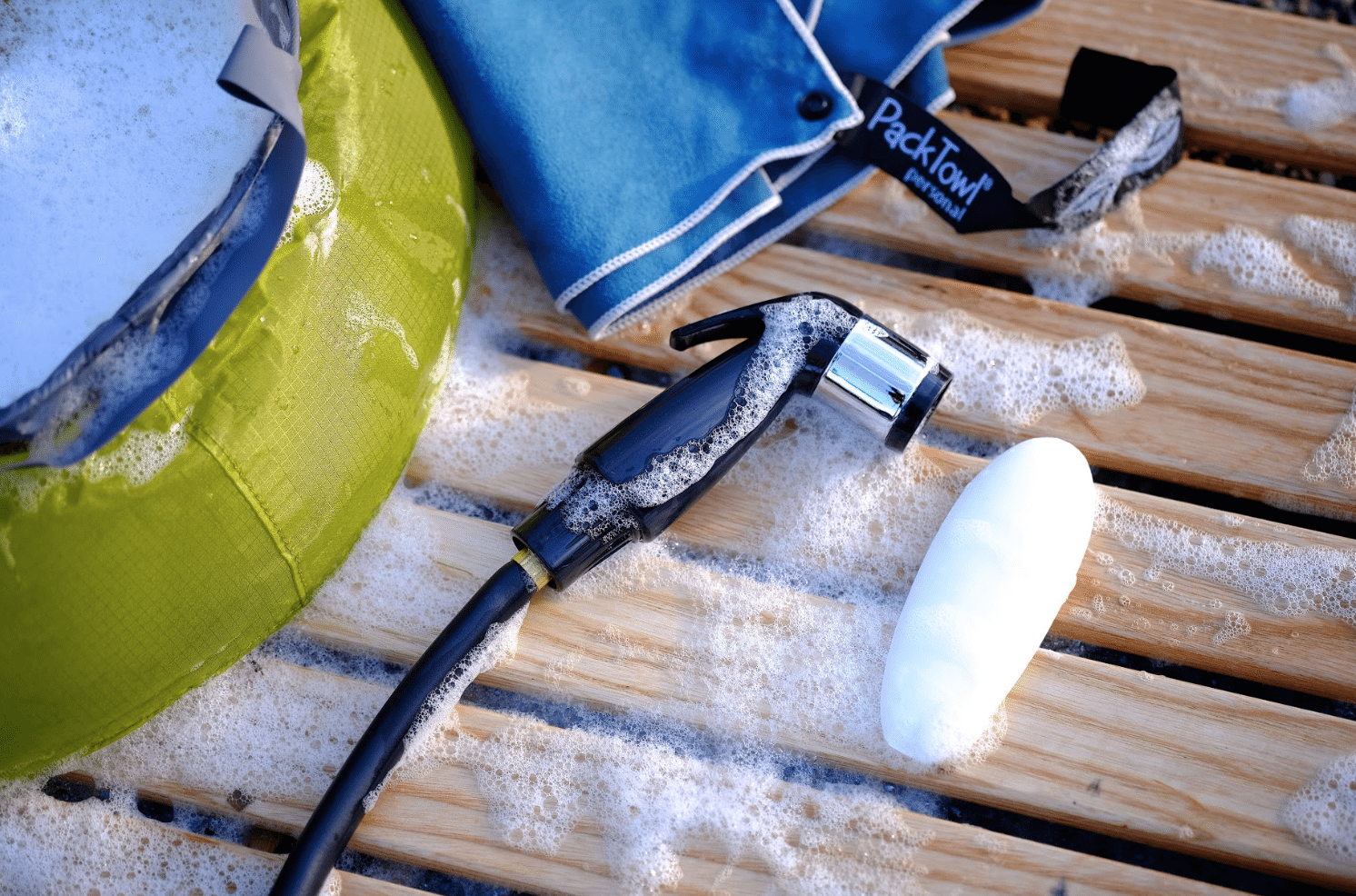 The shower nozzle on the Helio is the best in the business and eliminates the need to twist or fiddle with a shut-off valve. Smart.

Because it can remain on the ground, it is a perfect compliment to the Heliopolis and fits in the corner of the shelter without getting underfoot. The large handle atop the Helio makes it comfortable to carry when full, and the unit stands upright making it easy to fill, although the cap at the top is a bit of a small target to hit. Once done with your shower, the Helio fits into a high-quality zippered case with vented holes to help facilitate drying in transit.

There are not many gear gadgets that my wife claims as her own, but the Helio is one of them. She uses it around camp to wash dishes, rinse mud and dirt off shoes and ground sheets, and always finds other utilitarian uses for it. On a warm summer day I often catch her watering her herb garden with the Helio. Within my list of favorite outdoor toys, the Helio easily cracks the top ten. 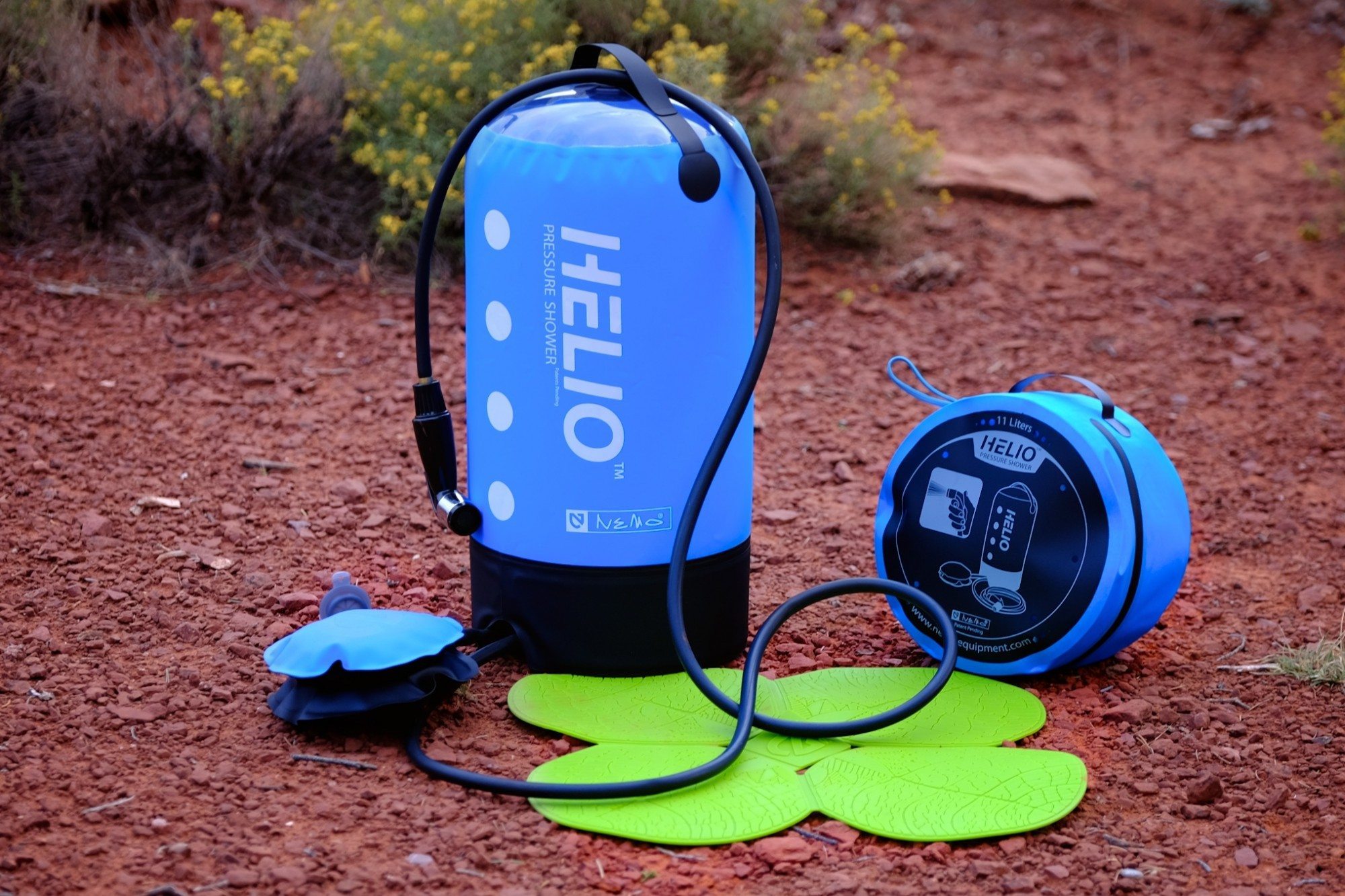 This handy add-on doesn’t need much explanation. Shaped to fit within the Helio’s zippered case, this heavy-duty mat is made of silicone and is just big enough for a pair of wet feet. With the Clover there’s no need to stand in a puddle of mud or trying to balancing on a rock while you shower.

Increase your shower-power with these additional products. 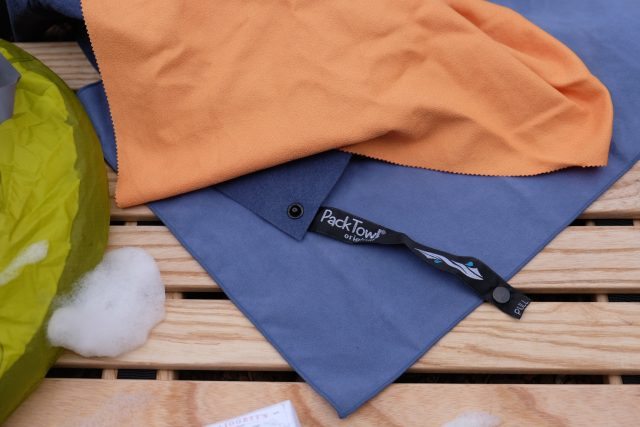 I continually bump into people who camp and travel, but don’t own at least one PackTowl. It’s mind blowing considering I never leave home without one…or several. The “Original” micro-fiber PackTowl hit the market decades ago and in that time has cemented its place in the pantheon of great outdoor products. Now available in five different variations, each retains the same end goal, to absorb as much water as possible, dry quickly, and not develop a foul odor over time.

At the uber-light end of the spectrum is the small and thin Nano towel which I take on every trip and use for typical drying duties, but also to clean off my sunglasses, goggles, or as a general do-all towel. The Original towel finds space in my tent bag and is used to mop up condensation or dry off a wet rain fly before pack-up. The Luxe, short for luxurious, is my go-to for car camping. As a traveler, I confess I might have taken a bath or two in a public bathroom and in those situations I’m always glad I have something from the Personal series on hand. There are a lot of micro-fiber towels on the market, and I’ve tried them all, but nothing does the job better than PackTowl. www.packtowl.com 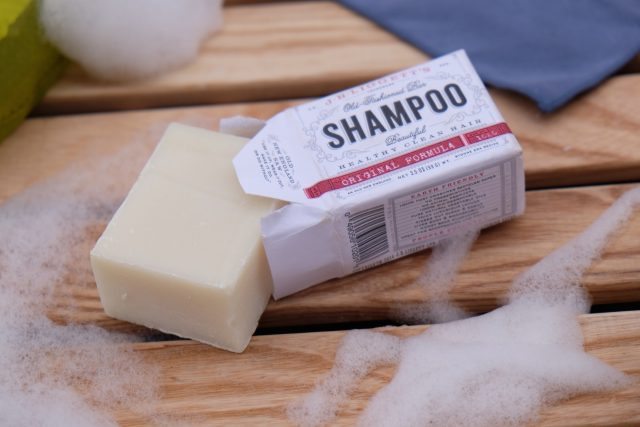 When I first came across this shampoo at a trade show, I admit it seemed unnecessary. What’s wrong with liquid shampoo? For one thing, it’s hard to travel by air anymore with liquids. I also discovered the efficiency of the bar was attractive. One 3.5-ounce bar of shampoo lasts far longer than an equal amount of liquid soap. Made with various oils including coconut, caster, sunflower, palm kernel, and olive oil, it’s far better for your flowing locks than a bar of hand soap. It also has a mild scent that doesn’t smell flowery, just clean. www.jrliggett.com 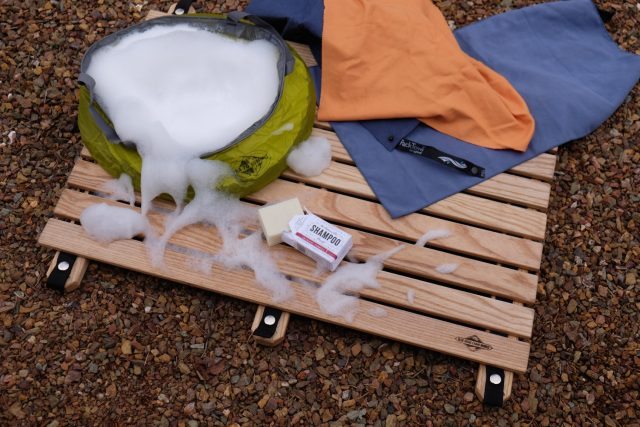 There are so many things I never knew I needed, like the Blue Ridge Chair Works Landing Mat. If you have ever taken a shower in the boonies, you probably found yourself standing in a puddle of mud. The Landing Mat is a personalized wooden deck that not only works as a fantastic wash platform, it finds use around camp for all sorts of things. Our’s lives at the bottom of the ladder when we use our roof top tent. It’s always in my car when I go mountain biking. I plop it on the ground and stand on it while I change my duds and shoes, or rinse off after a dusty or muddy ride. The whole thing rolls up in its own bag in a matter of seconds and is made to the impeccable standards we have come to know of Blue Ridge Chair Works. www.blueridgechair.com