The two-burner stove is a stalwart fixture of camp life and has been largely unchanged since the 1950s. Most models are riffs on the original Coleman stove and retain the classic metal suitcase shape with two fixed burners positioned side by side. There’s nothing particularly wrong with that format, but it was high time someone gave it a radical update and Jetboil did just that.

What makes their new Genesis stove so unique is its compact clamshell design built to fit within Jetboil’s proprietary cook set. Further adding to its utility, it can be tethered to a small satellite burner, one ideally suited for low volume tasks like heating water for that precious cup of morning java.

When I first saw the Genesis at last year’s Outdoor Retailer trade show, I admit it looked over-engineered with a host of moving parts, complex components, and a lot of potential for things to go wonky. I’ve tested enough new gear over the years to temper my optimism, which is shorthand for saying––I’m a cautious skeptic. Now that I’ve had Jetboil’s two-burner in my own greasy paws, and been able to put it to regular use, I have to concede that I was wrong and the Genesis is a stout backwoods tool. It also performs beautifully, so consider me impressed. 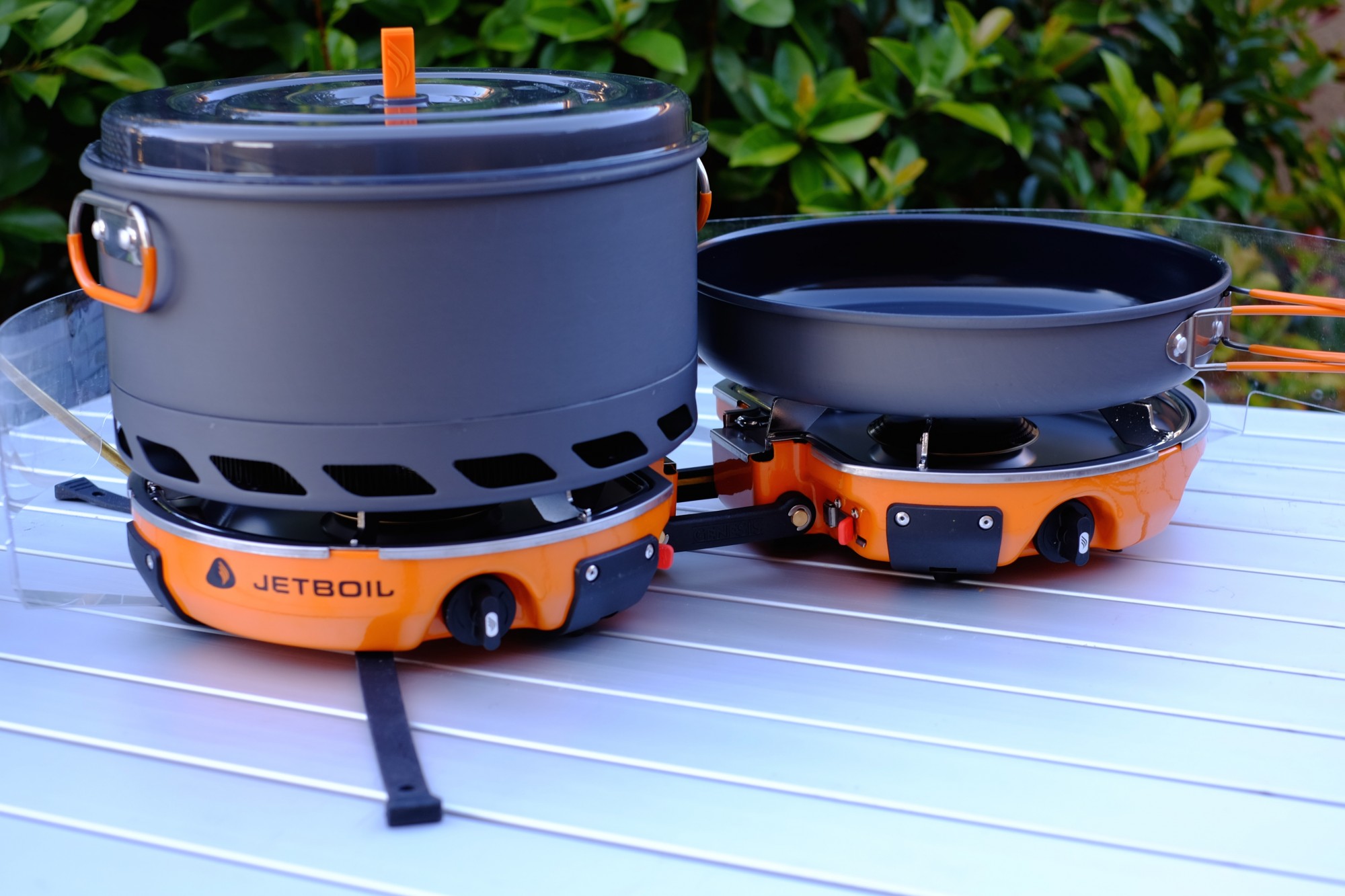 The design impetus behind the Genesis was to create a powerful stove system which packed into a compact bundle for easy transport. To achieve that end, the burners where designed in tandem with the cooking pots to fit snugly together. With the typical double burner, there is a lot of wasted space within the stove with no accommodations for cooking pots or anything else. When the Genesis Base Camp is all neatly tucked away in the padded carrying case, there isn’t the tiniest bit of unused space within. It is a dense and space efficient package.

Given how tightly folded the Genesis stove is when plucked from the 5-liter pot, I assumed it would require significant assembly. In reality, it’s as simple as releasing two rubber security straps, unfolding the burners, attaching the threaded fuel regulator, and then a one-pound propane bottle. Ready. Set. Go. The small Luna Satellite burner takes two seconds to unfold, and threads into a small fuel port on the far right edge of the main stove body. From bag to burn, set up takes all of 90 seconds and is so easy it can be done in the dark.

Jetboil had the foresight to make the Genesis compatible with larger propane tanks. The optional bulk fuel hose is an inexpensive add-on purchase. 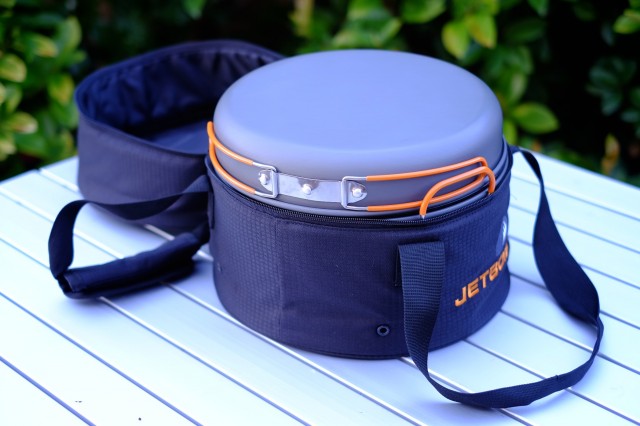 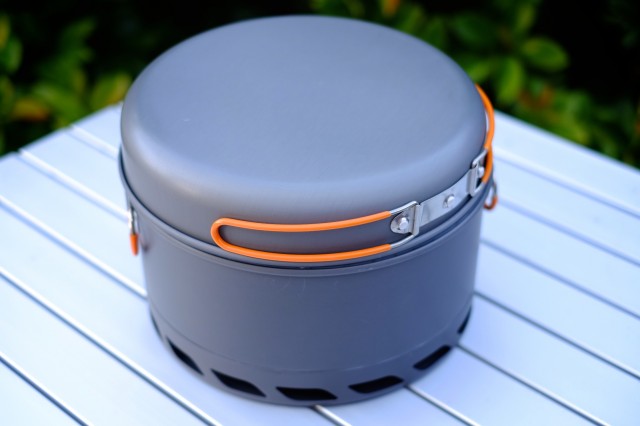 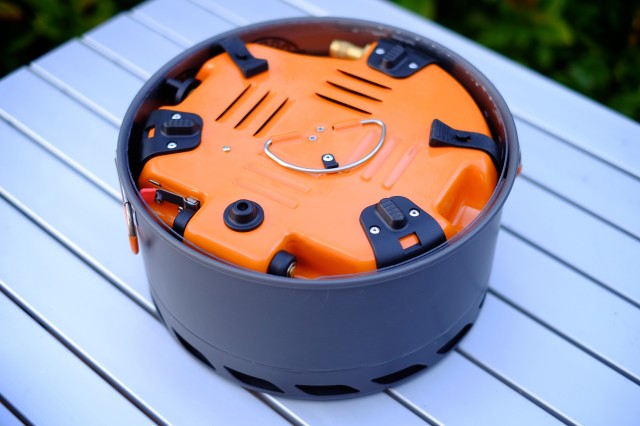 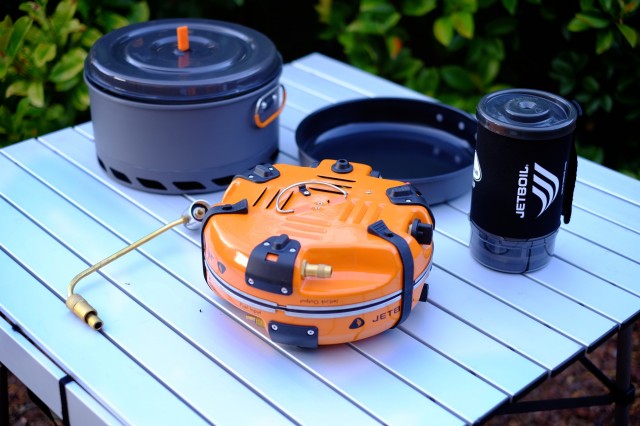 The two independently controlled stainless steel burners are 3.25-inches in diameter and distribute a large and even heat pattern. Ignition is provided by two lever-actuated piezo-electric lighters. They throw a mean spark that fires the stove on the first try every time. The heavy-duty pot supports provide excellent stability, particularly for the massive 5-liter pot which includes a built-in heat exchanger at its base and a well defined recess that mates with the pot supports to keep everything centered and secure.

The two most important performance metrics for any stove are relative to maximum heat output and finite control of the flame for precise simmering. At full throttle, each burner can churn out 10,000 BTU, but can be dialed back for low temp cooking. I’ve found the best way to test simmer control is to cook rice and the Genesis nailed that task. 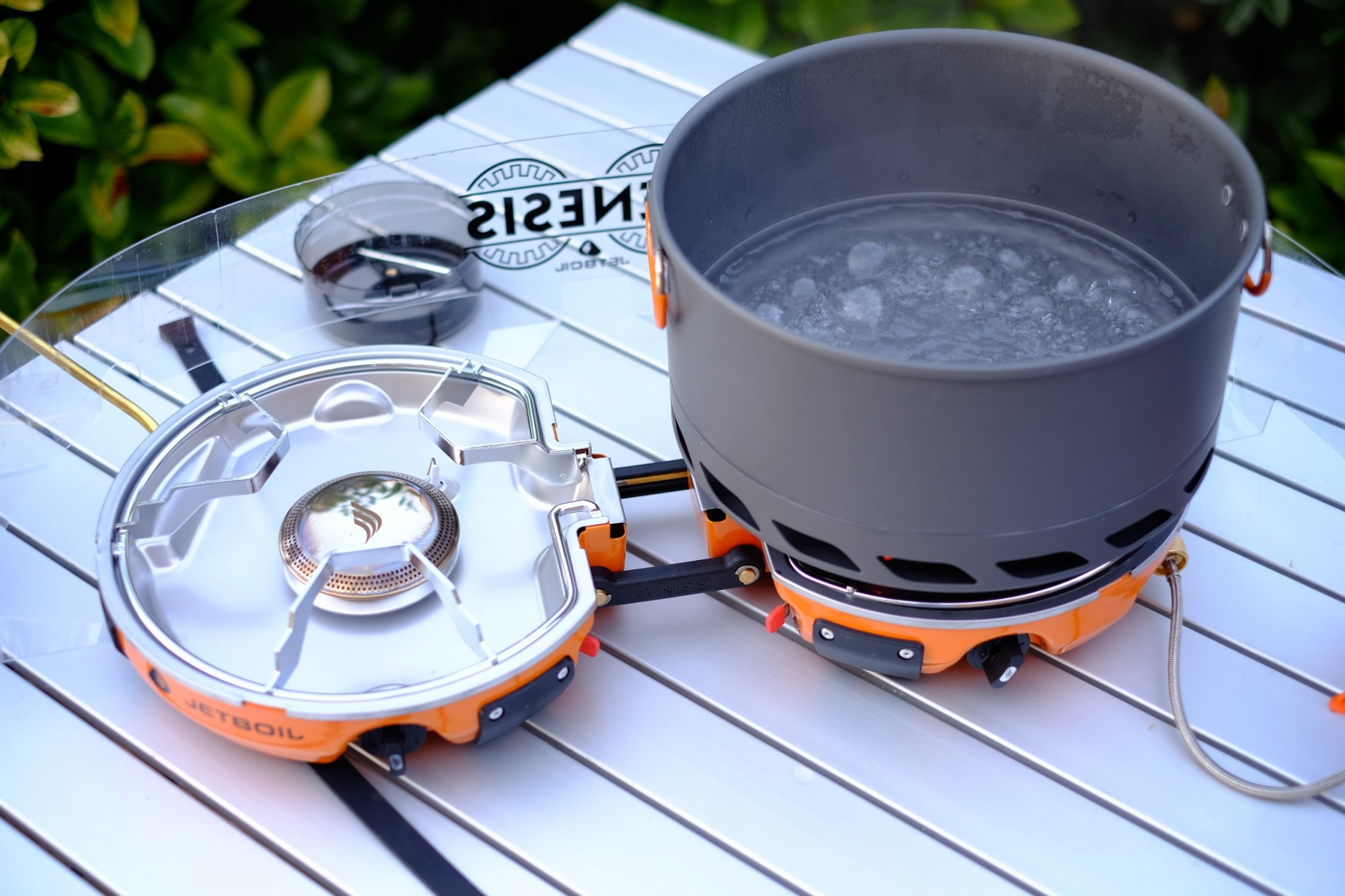 Boiling a shallow amount of water is a great way to see how evenly heat is distributed across the bottom of the pan. The heat exchanger and wide burner of the Genesis create an even heat pattern.

One of the frustrations with many stoves is the delay between adjustments to the flame control knob and the time it takes to see that change in the burner output. I had one of Jetboil’s earliest group cooking stoves and it was impossible to use. I’d dial down the throttle, see no change, dial it down more, then the burner would go out. The Genesis is very responsive to inputs from the control knobs which makes precise temperature management hassle-free. 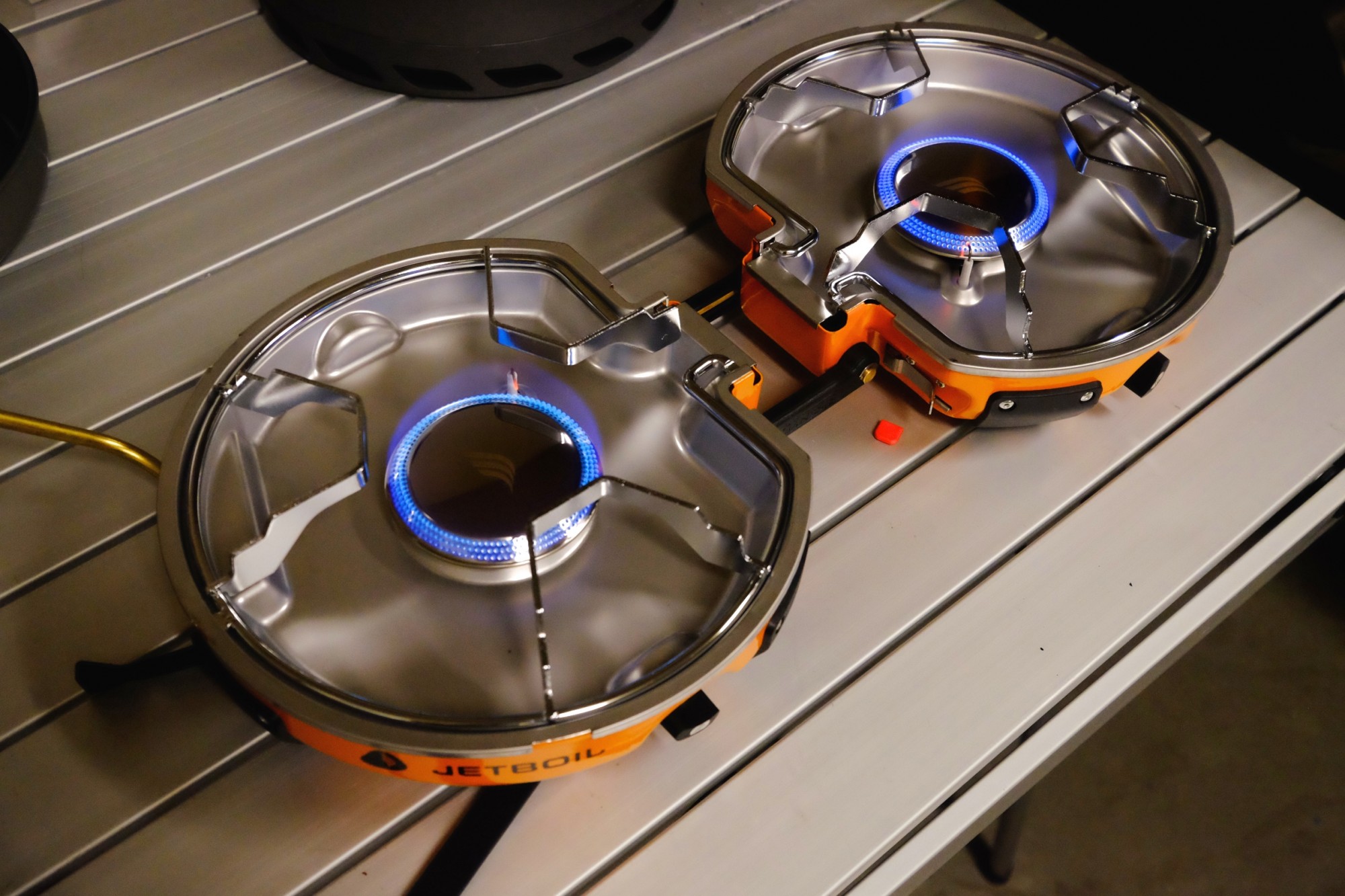 Like all propane and isobutane stoves, actual maintenance is effectively nil. Even the piezo-electric ignitors are well protected and unlikely to be damaged or worn over time. This means any time fussing with the stove will be dedicated to cleaning. The pot supports and burners can be detached quickly without any tools to allow the removal of the drip trays. Those surfaces have a smooth finish that is easily cleaned with a minimum of nooks and crannies. I’ve found the burners stay relatively clean simply because they are compact and tucked neatly under the skillet or pot. There is not much surface area to get splattered with grease or spill-over. 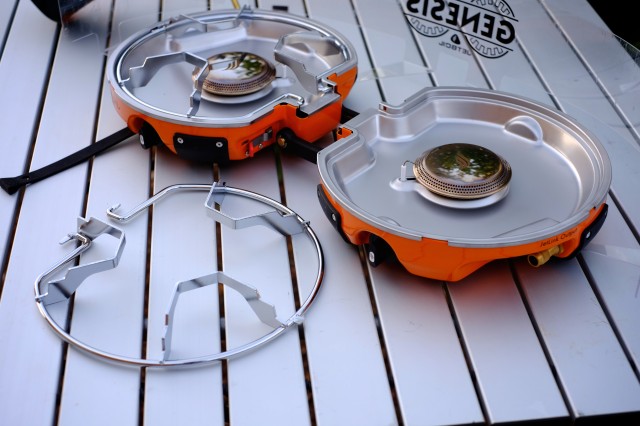 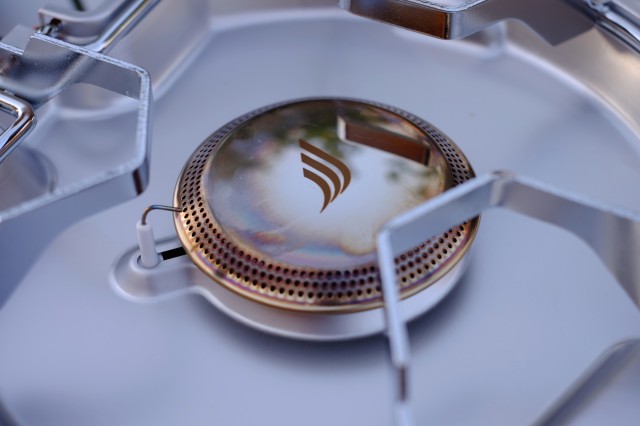 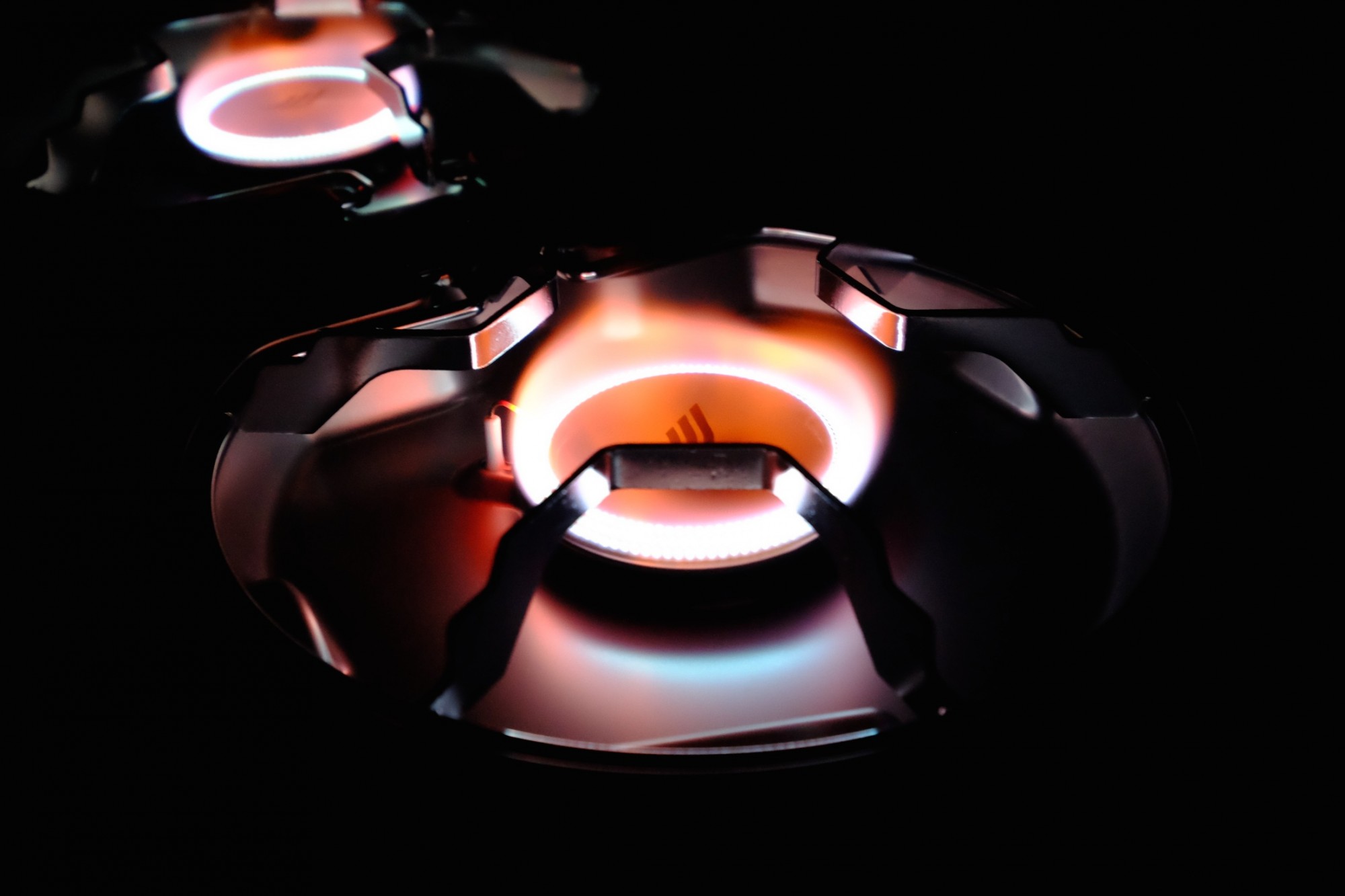 Purpose-built for group cooking, the 5-liter pot is quite massive. It may even be too big for some culinary duties, but the stove supports work with any standard cooking vessel. Because the pot employs Jetboil’s FluxRing heat exchanger technology, it can boil three liters of water in about 11 minutes at 5,000 feet, which is on par with the gas stove in my kitchen. The pot also has two well defined handles, a transparent lid with built-in strainer, and while it is made of thin metal, feels like it will survive heavy use. Some owners have reported dents in the base of their pot when pulling it from the box the first time, but I didn’t experience that. 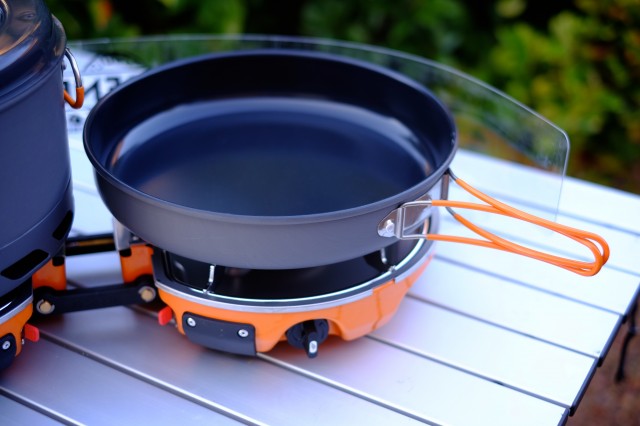 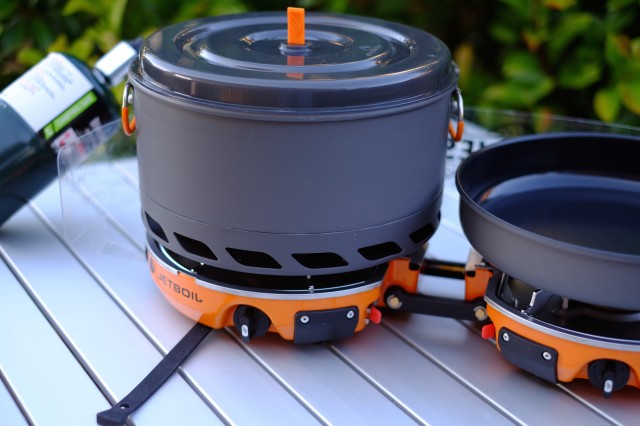 The 10-inch frying pan caught my eye, because––bacon. Eschewing the conventional and delicate non-stick solutions frequently used in the outdoor industry, the Jetboil frying pan is made with a durable and environmentally friendly ceramic coating. With no FluxRing under the skillet, it can be slid and wiggled across the burner as we backcountry chefs are prone to do.

The Luna burner initially struck me as a weird afterthought, but in use is pretty handy. Often times I just need a few ounces of water for a cup of tea or coffee. I don’t need to put a splash of water in a 5-liter pot. It also seems like we need continual warm ups of water throughout an overnight camp cycle, so having a burner that can boil half a liter of water in a matter of seconds is convenient. 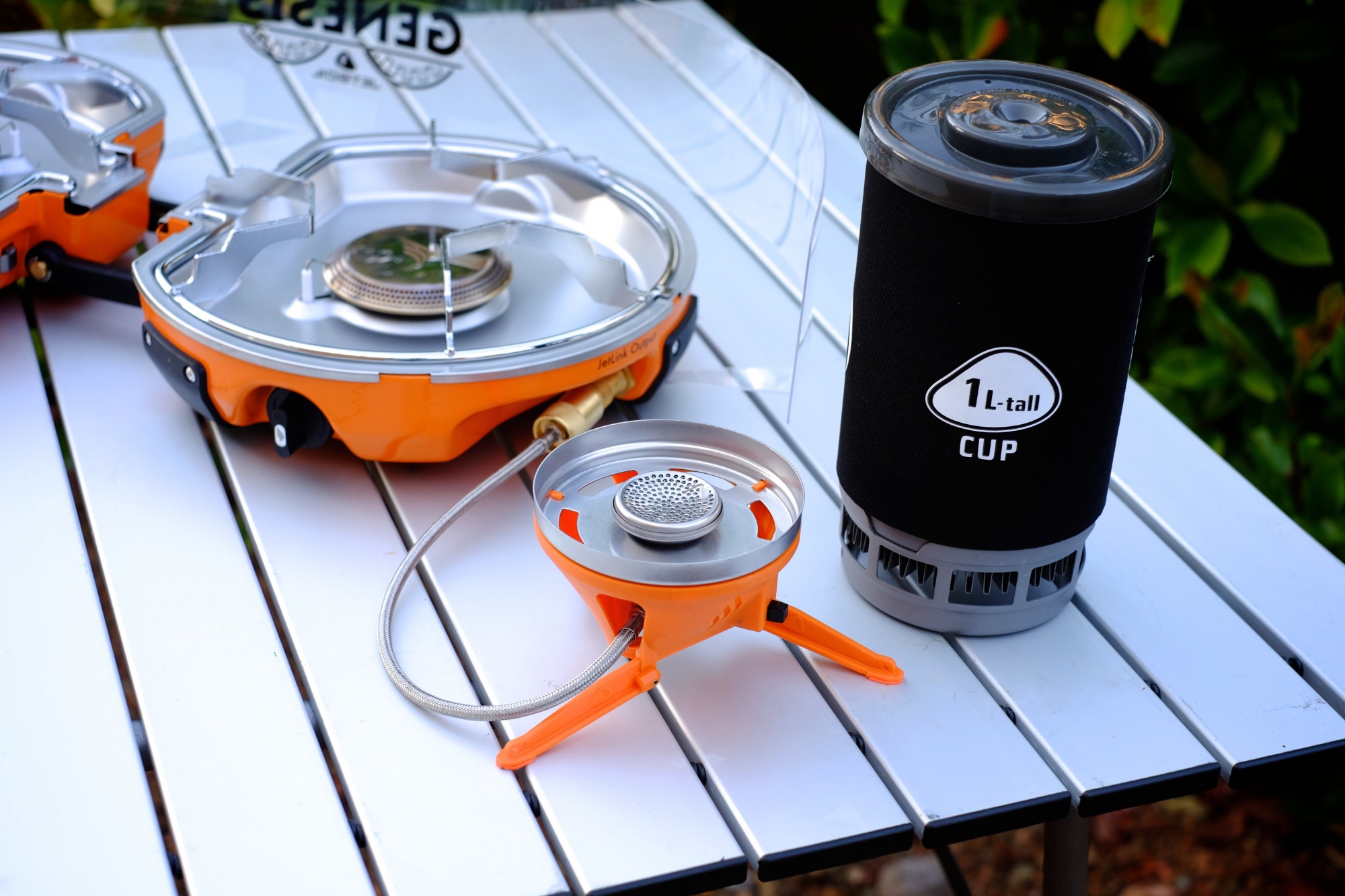 I want to preface any criticisms by first saying that I love this stove and think Jetboil did a great job with design and execution. However, a couple of times over the past few cooking sessions my wife has asked, “What is that scrunchy face you’re making?”

The windscreen in particular is a little disappointing. I don’t know what my brilliant design solution would have been, but the flimsy plastic shroud that comes in the kit is fickle to install and doesn’t want to stay in place. Once affixed, it wobbles around and only modestly improves performance. It serves its best use as a protector between the stove and pot while in transit.

File this under extreme nit-picking, but the seam within the lower aspect of the main pot can be annoying and creates a difficult area of the pot to clean. Again, that’s getting downright critical, but it’s something I hope they change in the future. 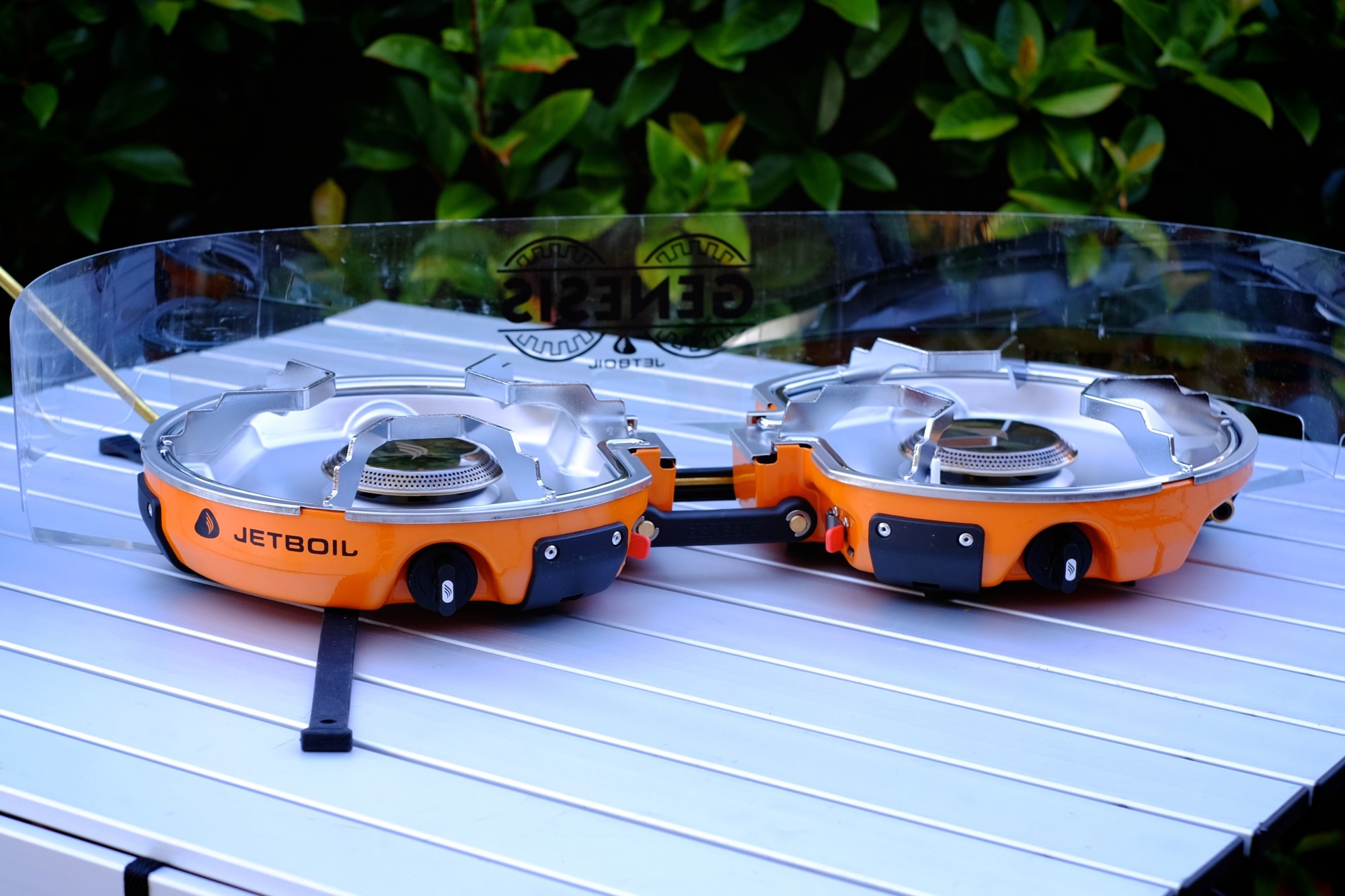 My other minor quibble is with the large amount of real-estate the system consumes when fully set up. With the satellite burner in place and a one-pound fuel canister attached, the Genesis system consumes the entire width of my camp table. I wouldn’t levy that as a fault, but simply a consideration.

In short, this is my favorite two-burner stove on the market. It commands a hefty price, but considering what is included in the kit, the performance it provides, and the space it saves in transit, I think it is a fair fetch. Set up is quick, the temperature control is superb, and it feels like it will serve me for years to come.

As an aside, last month I attended a press trip in the White Mountains of New Hampshire. Our group of 20 hungry campers all feasted on a delicious Moroccan inspired meal peppered by famed chef Jennifer Scism. She cooked that dinner, plus breakfast the next morning, all on a Genesis Base Camp System.

I’m wholly impressed with the quality of the construction and the thoughtful attention to detail. As summer gets into full swing, I will continue to put it to use to see how it holds up, but I suspect this will be a favored piece of gear for many seasons to come. 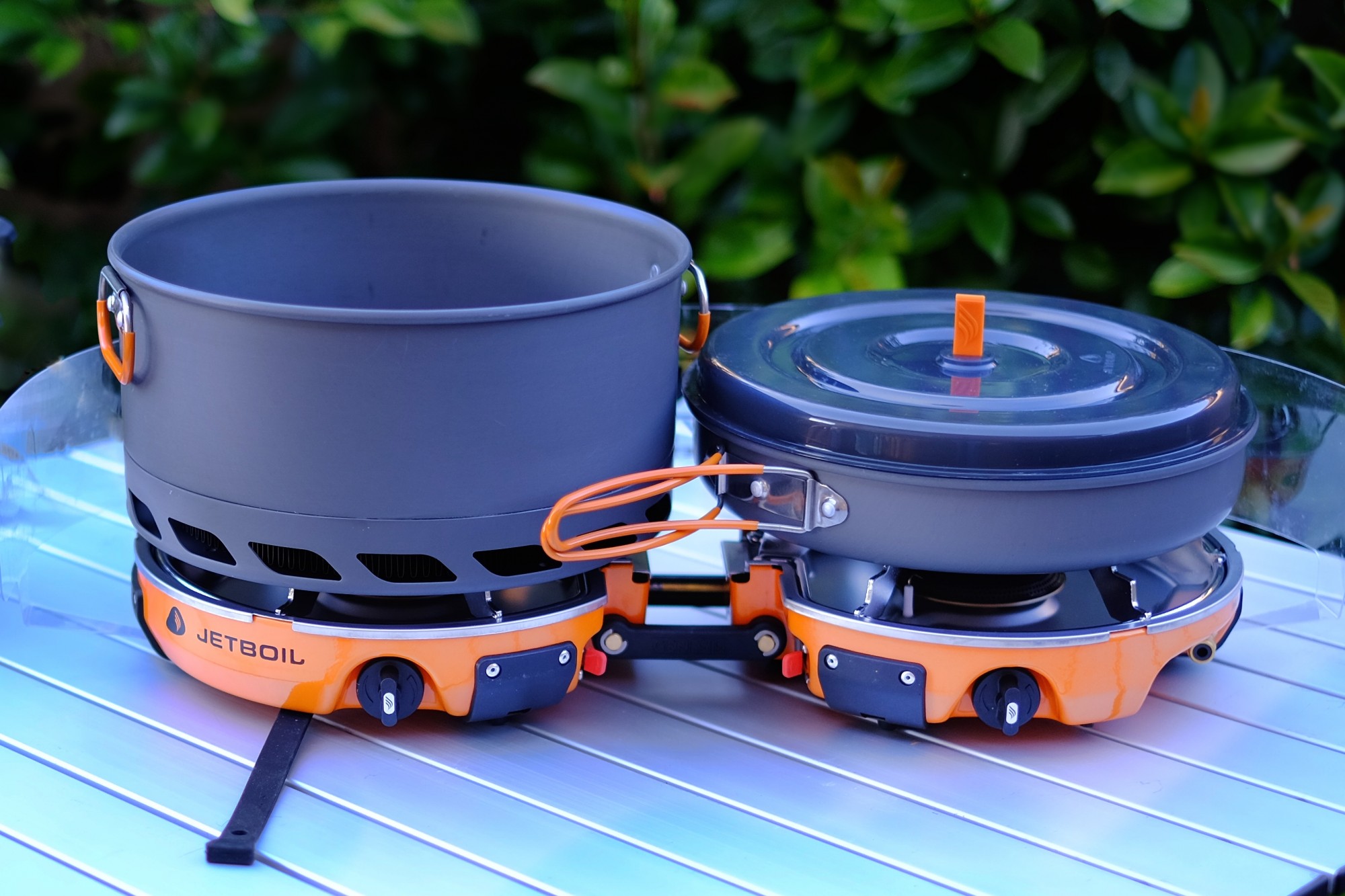