In stock form, the suspension on the Ford Super Duty series isn’t anything to write home about. It’s fitted with small, nameless, black monotube shocks which are forced to undertake the massive job of dampening a 7,000-pound vehicle and its beefy driveline. Tuned for pavement comfort and towing, it’s the weak link in the suspension that quickly exposes itself as soon as you venture away from the paved world.
Before outfitting my Super Duty with Icon Vehicle Dynamic’s super-hero level suspension, the truck bucked and kicked like a pissed-off bull over even the lightest corrugations and smallest washouts. Afterward, I found the magic carpet ride I had been looking for all along. 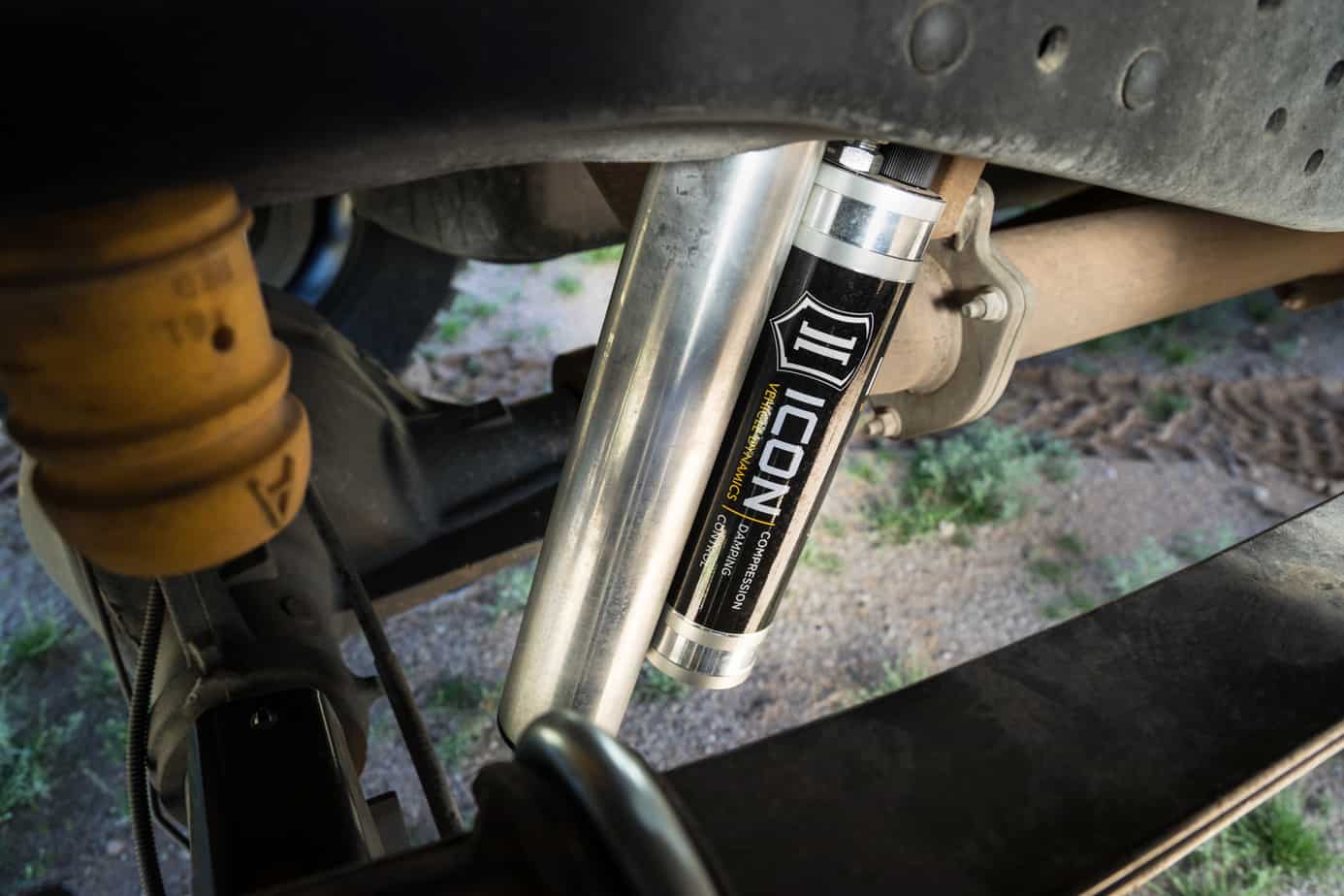 Icon offers a variety of suspension systems, engineered to offer varying lift heights and capabilities, all with an underlying credo that emphasizes function and performance over the kind of useless bling you’ll find on the floor of the SEMA Show. ICON’s offerings range from a 2.5-inch leveling kit with 2.0-inch rebuildable shocks to 7.0-inch coilover systems with a custom 4-link front end.

I went for the 4.5-inch Stage 3 system on my 2016 Ford F-250, which includes USA-made 2.5-inch reservoir shocks with beefy shock shafts. I opted for their CDCV shock upgrade, which adds Icon’s adjustable compression dampening control. 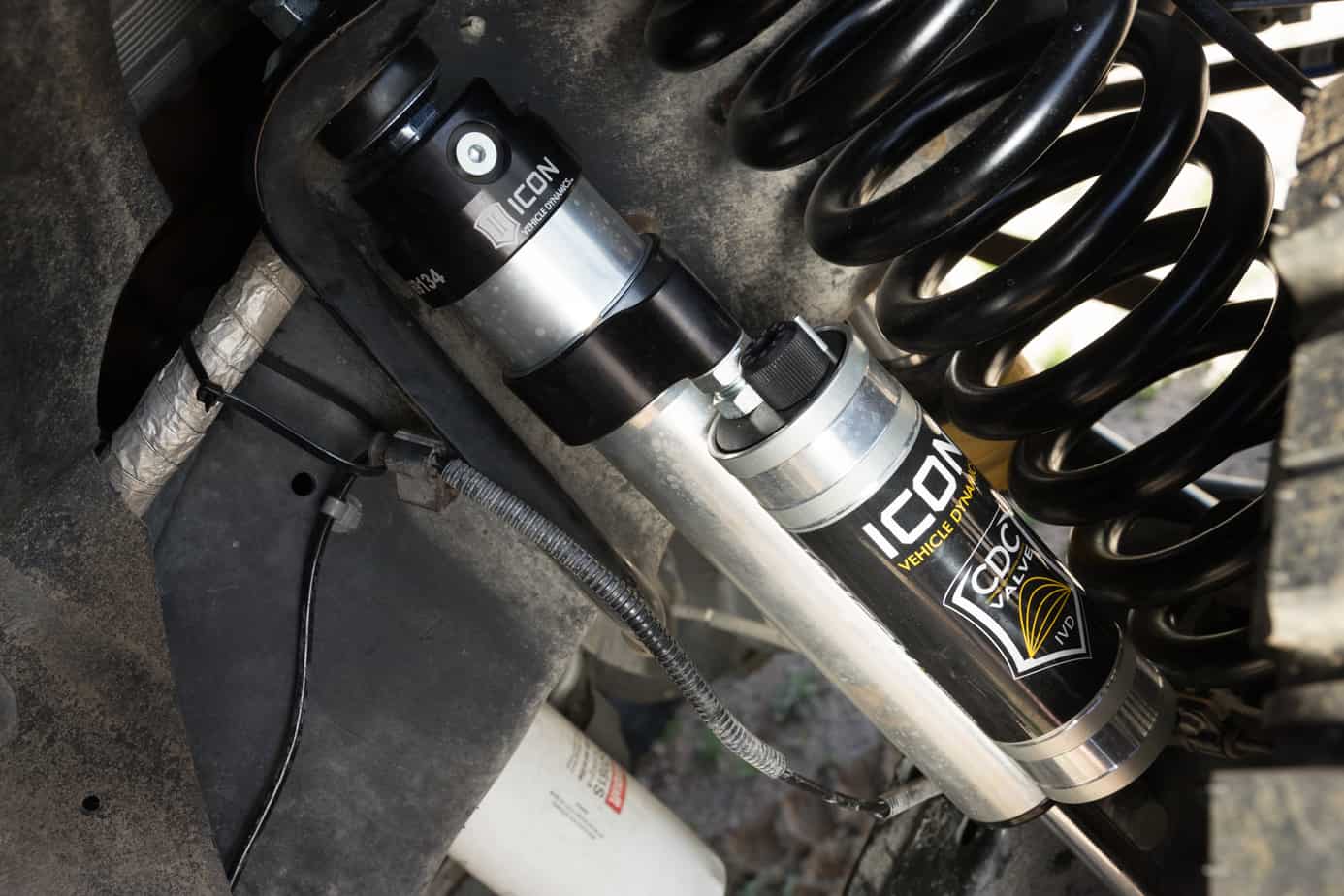 To ensure your suspension geometry doesn’t get out-of-whack, the kit includes beautiful dimple-died drop brackets wearing an Icon shield, with grade 8 hardware to relocate your factory radius arms. Lift blocks are used in the rear, which prevent a large spring arch, preserving the truck’s payload and ride quality. ICON’s unique adjustable track bar is included, which can be aligned without requiring removal from the vehicle, saving massively on install and alignment labor. Bump stop and sway bar spacers, as well as brake line drop brackets are of high quality and included as well. 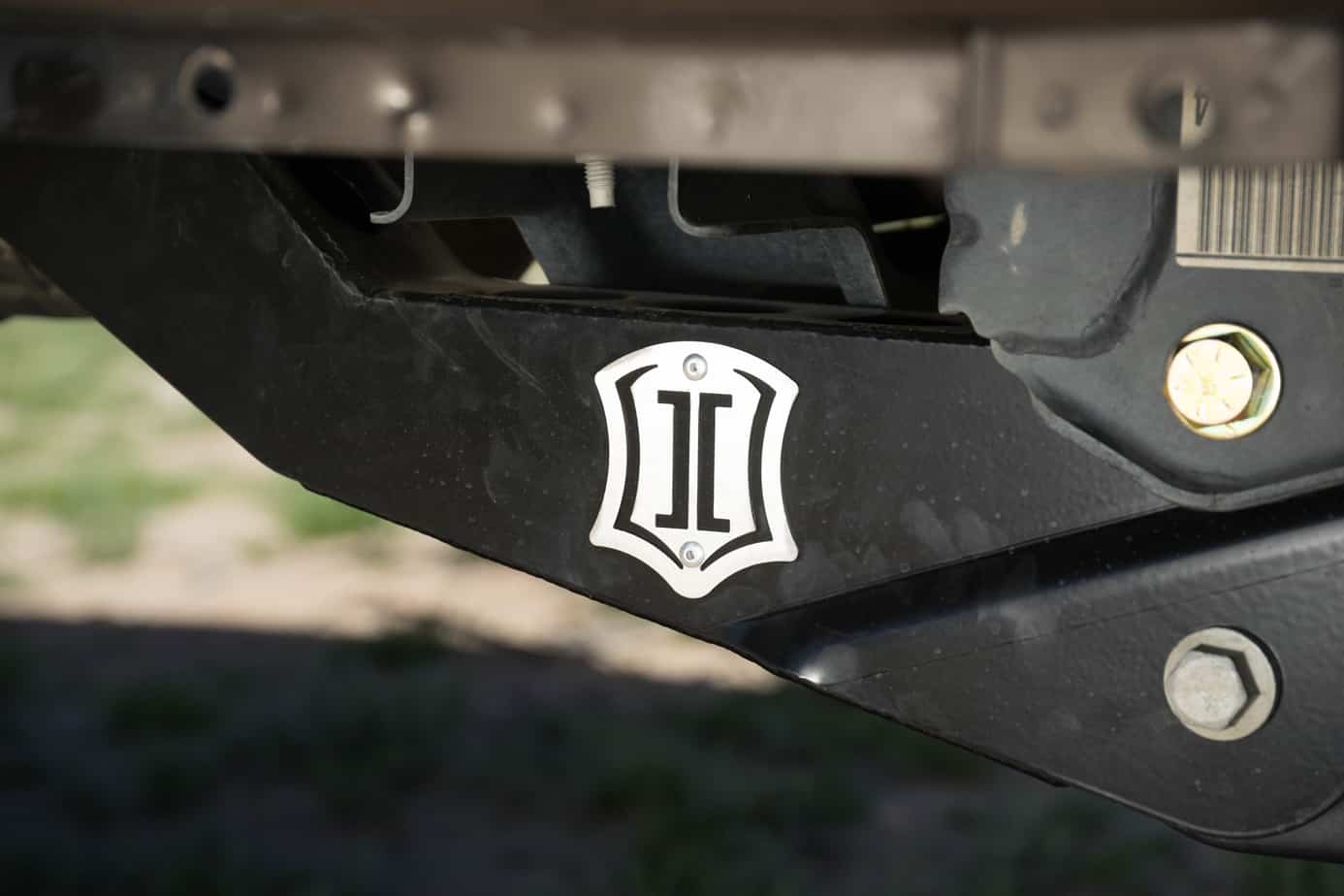 How Did It Work?

In stock form, the truck rode fairly well, but it quickly reached its limit on even the easiest trails. Of particular note was a massively over-dampened rear end, with the stock shocks resembling a pogo stick more than a dampener. This also manifested itself on segmented concrete highways, where the repetitive bouncing make you question what Ford’s engineers were thinking.
No matter of fancy valving or geometry can make a 7,000-pound lifted truck on 37-inch tires handle like a sports car, or ride like an S-Class, but all things considered, the Icon Stage 3 kit greatly improved the ride quality (especially on those segmented highways), while affecting the handling as minimally as possible. 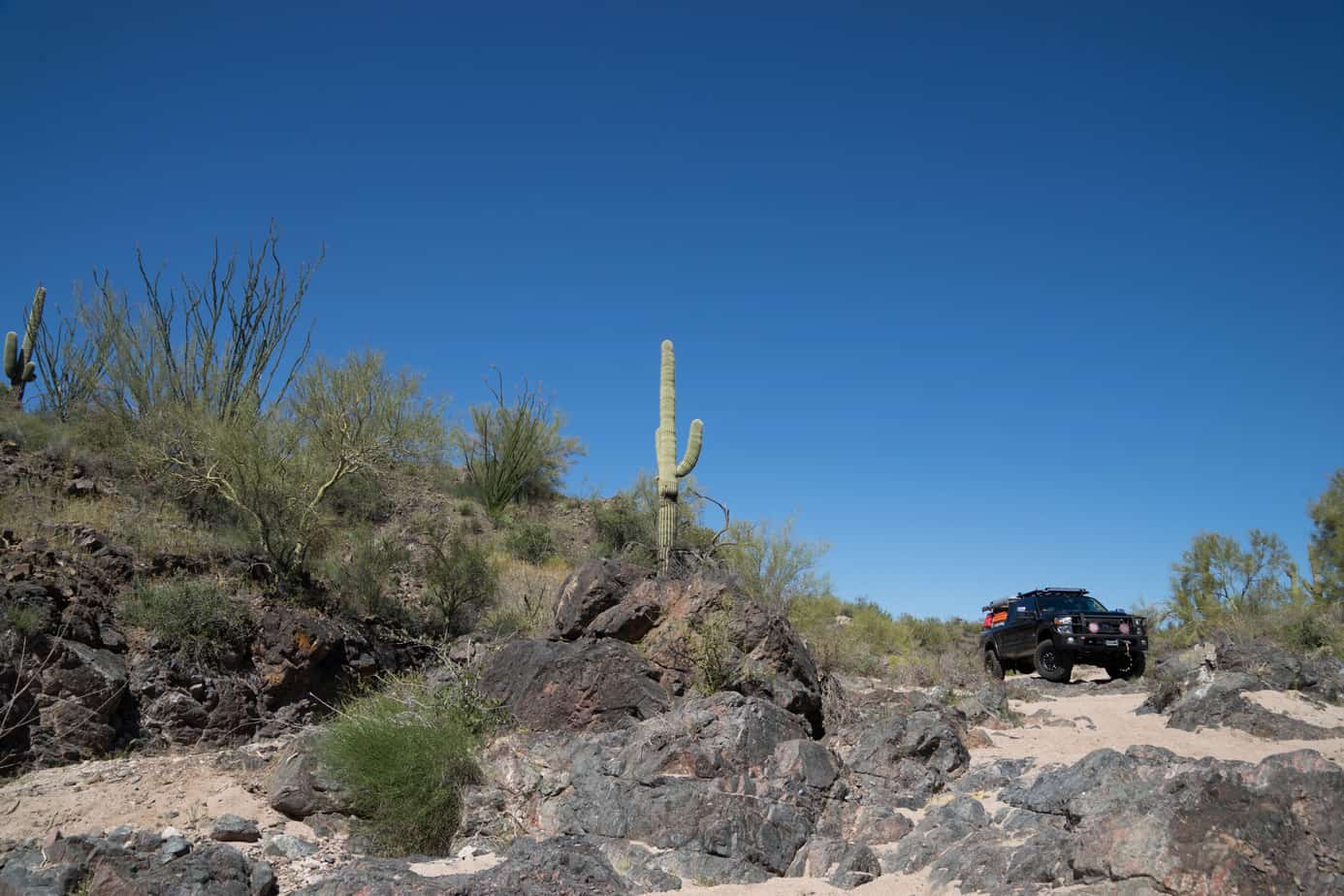 I tested the suspension over 20,000 miles extensively in two main areas: Arizona’s deserts and pine forests and Colorado’s alpine mountain passes, both areas I lived in during this time period. This truck showed it’s potential in the wide-open deserts, where the 50-percent increase in wheel travel could be taken advantage of over whoops and rocks. While it’s a bit heavy to jump, the truck did get airborne a few times, though it handled landings with ease and poise so that you really didn’t even know you had entered flight. With almost 900 pound-feet of torque on tap and 37-inch tires capable of rolling over almost anything, I would argue that there are few overland vehicles faster when the terrain is long, fast, and open.
With Imogene Pass just a few miles from my doorstep, we’d frequently use the truck to run over to Telluride for lunch. Imogene is rugged and rocky, with plenty of square-edged bumps and annoying baby-head rocks and ledges. It was the perfect juxtaposition to the desert terrain in both climate and trail surface. The stiffer performance nature of the shock meant that to make it work well, you needed to carry speed, which resulted in a smooth ride in addition to record-setting times across Imogene. It was here that the suspension system couldn’t hide that you were in fact in a full-size, 3/4-ton truck.
With extra body roll and a higher center of gravity, I’m also glad I paired the kit with Icon Alloys Alpha 20-inch wheels; its 0MM offset provided a wider track width for stability and allowed for almost no scrubbing with the 37-inch Falken Wildpeak M/T tires. Best of all, Icon Alloys offset doesn’t make you look like a bro-dozer, and doesn’t make an already wide truck even wider. As I lacked the equipment to properly lift and secure my heavy-ass truck, I opted to have my Icon suspension system installed by one of their largest dealers, SDHQ in Gilbert, Arizona. They’ve probably done more Icon lifts than anyone in the business, and I’m confident that one of the reasons why I was so happy with the end result was due to how it all came together at the start.
SDHQ had the kit in stock and did the install correct the first time, including a spot-on chassis and suspension alignment—doing a better job than Ford did from the factory. A re-torque was included in the install price where anything out of spec was adjusted, and the truck was re-aligned to account for the suspension sag that happens as the kit breaks in. It was money well spent, and I’m a DIY guy. 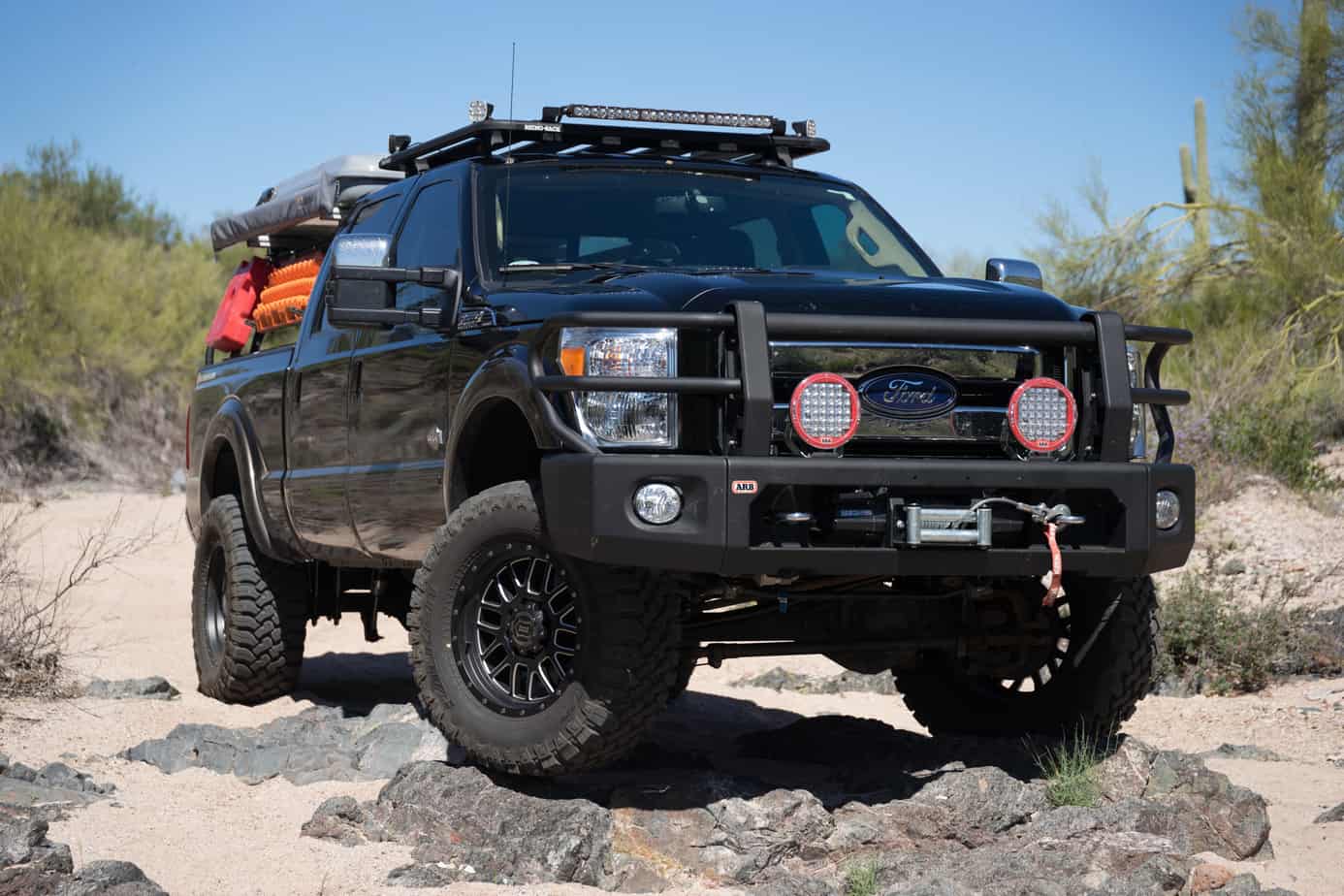 While I’m forever skeptical of all but the highest-end adjustable shocks, I found that Icon’s CDVC really did work, as each clicker produced a defined change in the vehicle’s driving characteristics, allowing me to tune the feel of my truck. I opted for slightly different compression damping up front (level 7) than in the back (level 3) which allowed me to better account for the weight bias of the empty bed with the heavy diesel engine up front. This isn’t race-level adjustability, but if you require that for overlanding, you might want to take the roof tent off your pre-runner and find a new buzz word.

What Would I Change?

With most manufacturers jumping from 2 inches to 6 inches of lift height and offering nothing in between, the best thing about the suspension system was the 4.5-inch lift height that Icon offers. It offers the best combination of ride, ground clearance, and wheel travel that you’re going to find in a full-size truck.
But it’s still a full-size truck, and frankly, if I were to do it again, I’d opt for Icon’s 2.5-inch kit and drop from a 37-inch tire to a 35-inch tire. Why would I do this you ask? Well, despite looking fantastic and performing beyond expectations, the tall combination of two made the truck almost unusable as a truck—it was simply too high to regularly load things into the bed, which in hindsight I realize is entirely my own doing. Luckily Icon offers a kit with the same level of performance in a 2.5-inch lift height variant. You’ll find me with that next time around.
The Falken Wildpeak M/T is rated 4.8 out of 5 stars from 892 customer reviews on Amazon.

Video of the Week: Timeless Adventure 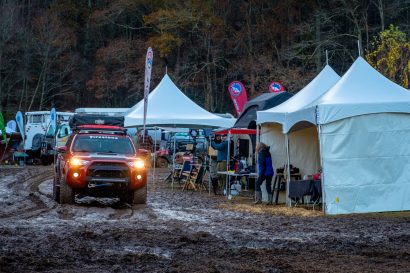 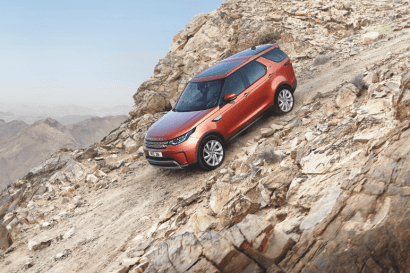 And Here it Is: Land Rover’s Latest Discovery