Few things can crush an appetite as quickly as the words dehydrated food. I grew up in the 1970s in a family of hippy backpackers and remember well the first backpacker meals containing curious particulates of beef that tasted more like tree bark than anything bovine. While much has changed, and dehydrated meals are far more palatable, none are really––yummy. That is until now.

No one would fault you if you hadn’t discovered Good To-Go meals as they just hit the scene last year. In that brief period, they’ve won a few awards, legions of loyal fans, and did well to adjust the culinary standards of backcountry meals across the board. The reason why most dehydrated foods are so ho-hum has little to do with the process of preparing the meals in their dry form; that science is pretty nailed down. It’s often the recipes themselves that are so bland, or just ill-concieved. So, what happens if you combine good dehydrating methods and premium ingredients with an award winning, nationally acclaimed chef? Awesomeness is what happens.

The founder of Good To-Go is Jennifer Scism, a name you may have seen on TV as she bested famed chef Mario Batali on the hit series, Iron Chef. She has also cooked in some of the country’s best restaurants including one with four stars to its credit. In short, she knows her way around a kitchen, and not just those adorned with stainless steel and a team of busied hands. Jennifer is also an avid backpacker and has cooked meals in the middle of nowhere, thus the impetus to start Good To-Go.

The current menu is admittedly small, but the four flavors are delicious, nutritionally balanced, and if you’re one of those who feel gluten is best avoided, they lack that ingredient, as well as any meat. Some of my favorite things to eat are vegetarians, but my carnivorous inclinations don’t mind the lack of meat. The flavor is there, the nutritional content is spot on, and if nothing else, these are simply good meals. 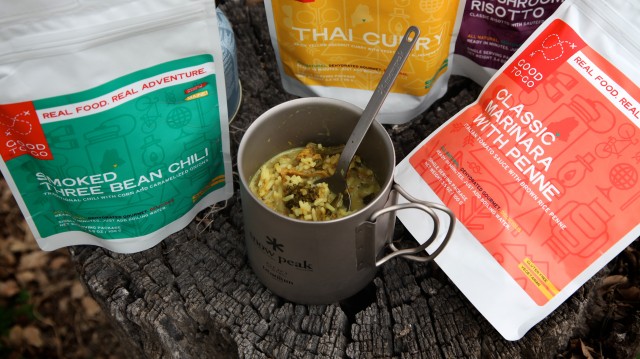 One of the things I really like about the Good To-Go menu is that every flavor is available in one or two-serving portions. I’m not a huge eater, but the one serving portion is perfect for me. The meals also pack down quite small and can be consumed right out of the package reducing effort and water (no clean up). With regard to the quality of the meals, you’ll just have to see for yourself just how delicious they are. How Chef Scism managed to retain the nuanced flavors of each individual ingredient is remarkable. The Thai Curry has just the right bit of heat, a twinge of sourness to back the sweetness, and the crunch of the broccoli and cauliflower belies the fact this is a dehydrated meal. The chili truly does have a smokey essence and the risotto is leagues better than the crunchy rice meals from other brands. For meals on the go, you just can’t do any better.