Last year after an extensive evaluation of the world’s leading satellite communicators and emergency beacons, I made the decision to award Delorme’s inReach SE with Overland Journal’s coveted Editor’s Choice Award. It was a heady decision given how new the device was, but the more I tested it, the more I liked it. It’s been roughly a year since I made that endorsement and by all accounts the inReach SE has proven to be a strong performer earning a loyal following. As to not miss an opportunity to build on their success, Delorme recently launched a follow-up device with the inReach Explorer.

The Explorer adds several new features over its predecessor, some of which are rather significant. The digital compass and barometric altimeter are handy add-ons, but the new navigational aids are what really set it apart. Below is a breakdown of the various features of the Delorme inReach Explorer as well as my most honest evaluations as to how well those features work in the real world. 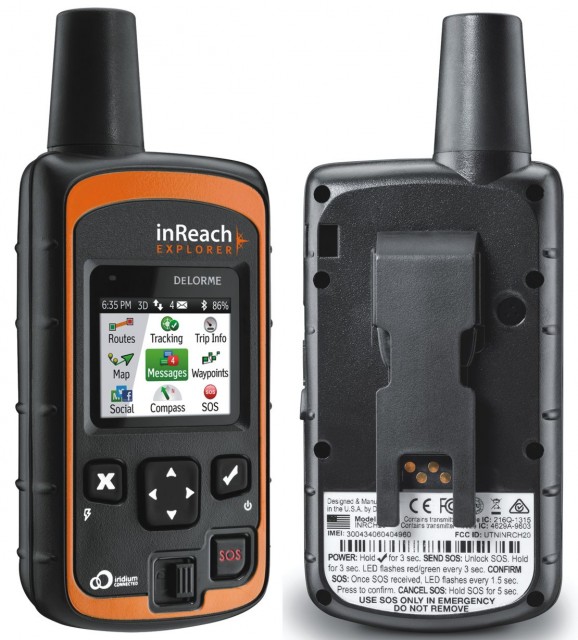 The inReach Explorer, like the SE that preceded it, is the only device of its kind that can be used as a stand-alone unit to send and receive text messages. This is made possible by its bright full color display, and while it can be a little frustrating to use, the inclusion of a virtual qwerty keyboard. To simplify messaging, most users will likely pair the unit to a smartphone or tablet as it really is the easier means of composing messages.

In my initial tests with the Explorer, I found it works just as well as the SE, which is to say it works quite well. I have heard some users complain of lagging delivery times with their text messaging, but I can’t determine if that was the fault of the device and/or the communication to the Iridium satellites overhead (unlikely), or rather an under performing cellular network right here on Earth (likely).

One of the things I like most about sending texts from the Explorer is the format of the text as the recipient sees it. Each text is paired to a hyperlink taking the recipient to a map and message page. Aside from the text itself, the map page shows the location of the device from where the text was sent as well as GPS coordinates and even the moving speed of the Explorer device. The recipient can then reply to that text message just as they would any other. It is important to note, as the holder of the Explorer unit, your normal texts are not simply routed automatically to the device. Your in-bound texts will primarily be replies to text chains you have initiated, or from senders given specific access to send directly to your Explorer device. 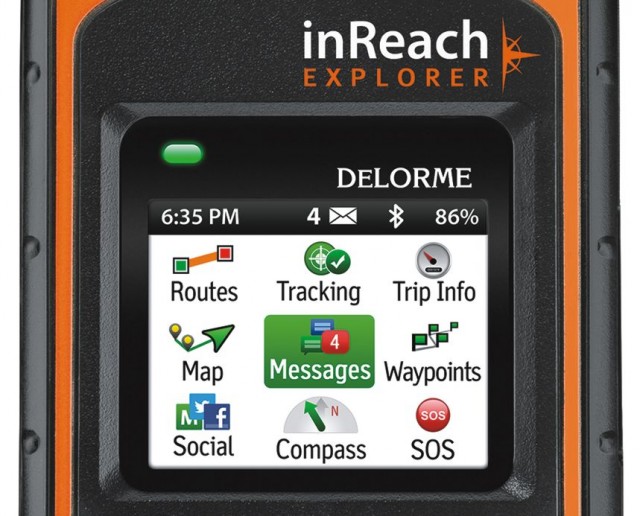 Tracking features are common to almost all Satellite Emergency Notification Devices (SEND). The Explorer’s tracking capabilities are comprehensive with intervals available between two minutes and four hours. Tracking positions are made viewable via Delorme’s Explore and MapShare web apps. In use, I found the tracking worked very well, and on the same courses where I have used other devices, may have had fewer missed signals. Anecdotal at best, but I would nonetheless say the Explorer’s tracking feature is excellent and reliable. 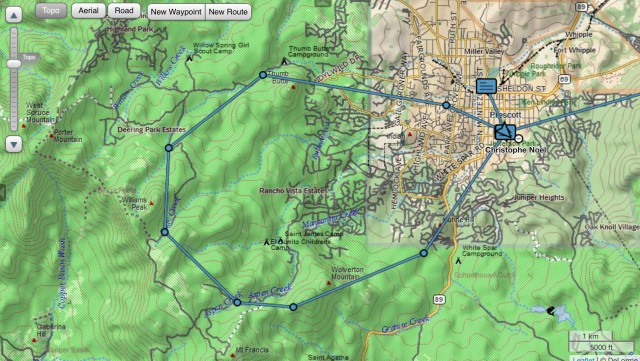 So, this is really why we’re all here. The Explorer is Delorme’s incremental step forward towards achieving that one-in-all device that combines two-way communications with emergency signaling, tracking, and full GPS navigational functions. I couch it as a step closer because in reality it is far from a substitute for a GPS unit. Not to sound overly critical, it’s a far substitute for a paper map.

On the upshot, the Explorer can now mark waypoints, record routes, and even provide basic backtracking navigation. It can even be uploaded with pre-established routes and waypoints via the Delorme Explore web app. Perhaps not so ideal, it cannot be loaded with even the most basic of base maps. All waypoints and routes are shown on a white void. To further the limitations, the Explore app, and thus the Explorer device, do not accept the import of established GPS files. This means you cannot program the device with outside routes and waypoints. You can create those files directly with the Explorer web app, but that creates a number of headaches starting with the fact the Explorer web app uses maps with minimal detail outside of North America. Modern GPS devices simply must include some means of importing and exporting common GPS files to and from various sources. The Explorer is perhaps too stand-alone in that regard. The final conclusion on the navigational aptitude of the Explorer is that it is rudimentary at best. It flirts with serious pejoratives like––technologically primitive. If there is a final redeeming aspect of the Explorer with regard to navigation, it is that it can be paired to any phone or tablet and used as a GPS receiver. In that application, the Explorer replaces my Bad Elf GPS receiver when I’m using my iPad with downloaded maps.

Mimicking mobile phone subscriptions inReach plans are available in a wide range of options. Subscribers can select between monthly or annual plans starting from $12 per month with strict limits on the number of texts that can be sent, to $99 plans that provide unlimited texting, signaling, and even includes unlimited tracking at the precise two minute interval setting. A common plan might put most users in the $35-60 range making the most of the $380 device. Other fees for initial set-up and changes in plans may apply, but they are nominal fees. Not being locked into an annual fee is a big bonus for those who travel seasonally. 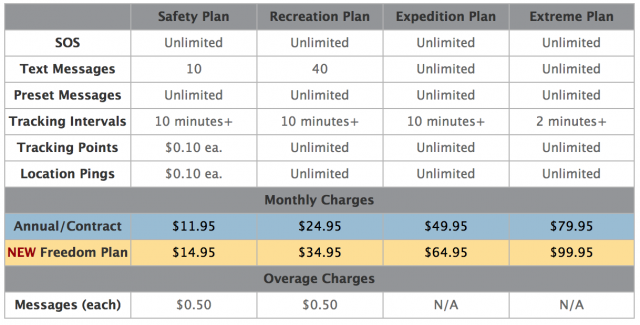 Having used nearly every device in this category from Delorme, SPOT, Briartek, and Text Anywhere, the inReach SE and Explorer are still my preferred devices for my own backcountry travels. I find the Explorer and its close cousin, the SE, are easy to use, are reliable and hold a charge far longer than I would have anticipated. With the tracking interval set to 20 minutes, I might push beyond the claimed 100 hour battery life, but not by much. That’s an impressive amount of power.

The size isn’t too big, the construction of the unit inspires confidence, and the subscription plans are more than reasonably priced with options for everyone. If I had a couple of small quibbles, it might be with the somewhat limited utility of the Explorer and MapShare web applications, which both seem desperate for an update. Although I just applauded the battery life, I do wish it used conventional batteries as that is often the only way to carry enough power into the bush.

Although the Explorer was released specifically to provide navigational features the SE didn’t have, I think they simply made the SE all the more attractive. I might still be tempted to purchase the Explorer just in case they release a firmware update and make background maps a possibility. Even without maps and more comprehensive navigational features, it is still far superior to most other communicators in this category.