When Cooper Tires unveiled the Discoverer S/T MAXX three years ago they may have introduced one of the best all-around, commercial-grade traction tires ever. It features a 4–5 rib tread design, meaning the center blocks alternate between a 4-rib and 5-rib pattern. Cooper’s says this design randomizes the tread-block impacts with the roadway, which helps achieve the remarkably low noise for a tire in this class. This is absolutely true; my first drive on Discoverer S/T MAXX treads in 2011 had me checking my ears for wax. Compared to similar void-ratio rubber like the Cooper S/T, and the discontinued Dick Cepek FC-II, the Discoverer S/T MAXX is a notably quiet design. Stone ejector ribs run laterally between the tread blocks helping discharge small rocks while preventing stone-drilling into the tire. 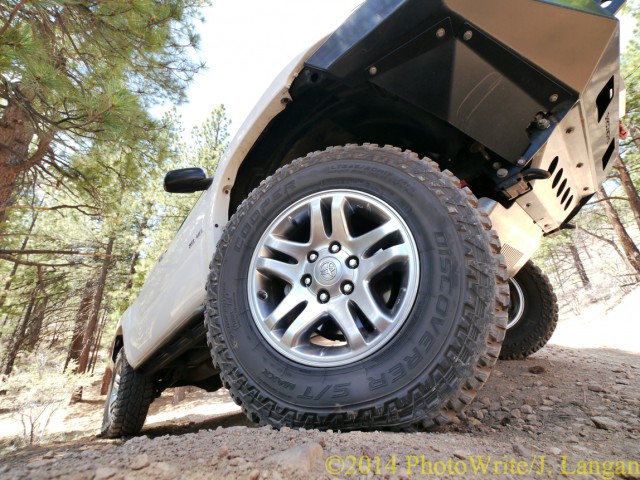 The Discoverer S/T MAXX employs Cooper’s Armor-Tek3 carcass with a sturdy 3-ply sidewall. Compared to the similarly named 2-ply sidewall Cooper S/T treads I’ve run before, the MAXX are notably stout and firm, a positive for anyone who really loads or works their tires. Cooper also states, their unique angled-ply construction absorbs and helps dissipate impacts. The buttress area of the sidewall offers off-pavement traction plus additional abrasion and puncture resistance. The tread compound is a blend of natural and silica-based material offering good wet-weather traction and excellent cut-and-chip resistance on gravel or rocky terrain. Cooper’s Australian website lists “on-road and off-road” use percentages. In the case of the Discoverer S/T MAXX, it’s a fitting 50/50 split. They are mud-and-snow rated, and they can be studded.

At the initial introduction in 2011, a mere eight part numbers were produced; one 18-inch, two 17-inch, and five 16-inch sizes were available. Initially I tested the Discoverer S/T MAXX in both the 275/70R18 and 285/70R17 sizes, mounting and briefly evaluating them on my long-term Overland Journal Tundra project. While impressed with the tread design and lack of noise, I chose to continue running another Cooper-manufactured tire I loved: the Dick Cepek FC-II.

With the introduction of 22 additional catalog numbers during the first quarter of 2014, the Discoverer S/T MAXX is now offered in 30 sizes, from the venerable load-range-C 31×10.50R15LT to a 35×12.50R20LT. With only two 20-inch, three 15-inch, and four 18-inch sizes offered, the vast majority of sizes are made for the 16- and 17-inch wheels used by most backcountry travelers. 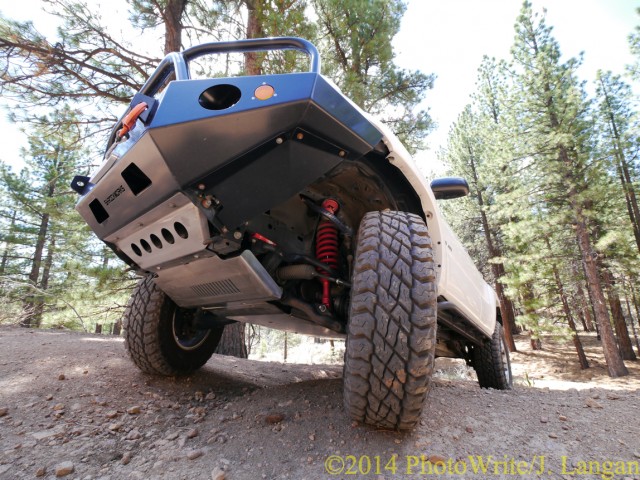 As a tire aficionado who enjoys buying and trying tires in various 16-to-18-inch designs, I was patiently waiting for the promised introduction of one special Discoverer S/T MAXX size; the LT255/80R17E. Nearly 33-inches tall and 10-inches wide like it’s 255/85R16 older brother, the 255/80R17 size is for those looking to avoid wider tread while still enjoying the benefits of 33-inch rubber. Prior to Cooper’s introduction, the only tire available in a 255/80R17 size was the BF Goodrich Mud-Terrain KM2. Cooper gets big kudos from me for making this tire in this fantastic, unsung size.

The LT255/85R16E Discoverer S/T MAXX was announced at the same time as the 17-inch version. The 16-inch 255/85 size has become long-in-the-tooth, but refuses to die. There are thousands of four-wheel-drive enthusiasts who prefer the overall performance of a narrower tread both on- and off-highway. I was thrilled to see Cooper included the LT255/85R16E in their catalogue. 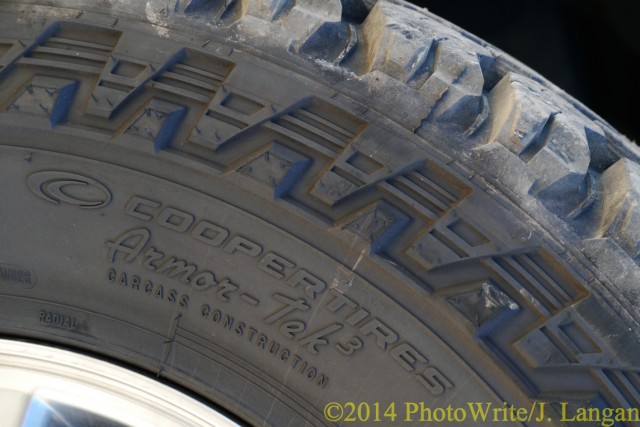 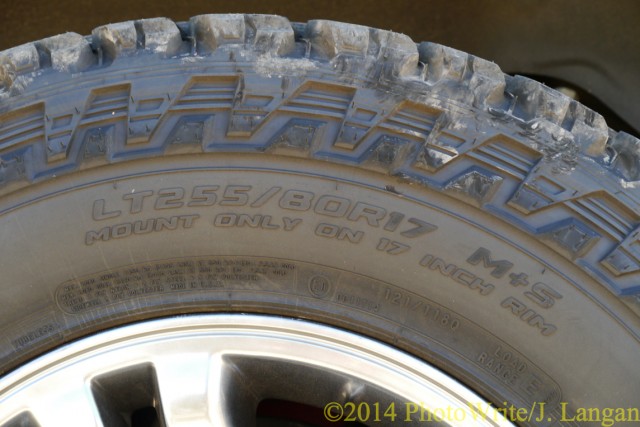 The set of LT255/80R17E Coopers reviewed here were mounted on the first-generation Toyota Sequoia 17×7.5-inch wheels I procured via Craigslist specifically for this test. The wheels were several years old but in mint condition, as straight and true as the day they were cast. My shop scale indicates each mounted tire and wheel assembly weighs 85.5 pounds; 58 pounds belongs to the tire and 27.5 pounds to the wheel. These tires utilize a 6-ply tread design that consists of one nylon, two steel, and three polyester plies.

I chose to balance the tires using the static, single, vertical plane method over the theoretically superior, dynamic method that balances both vertical and horizontal movement. The static method requires less wheel weight; typically stick-on tape weights are used on the inside of the wheel. Barring a severely untrue tire or wheel, I’ve found static balancing works well most of the time, particularly on larger truck tires. Another advantage for off-highway travelers is that weights inside a wheel are less likely to be knocked-off in technical terrain. 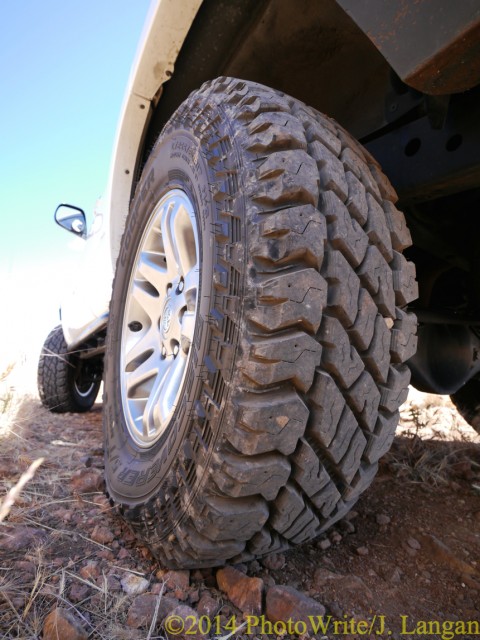 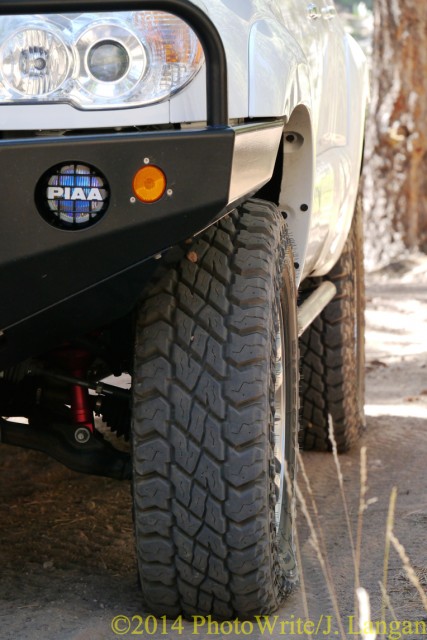 The tires were numbered to track them during balancing and use, including their initial placement on the highly modified V8 Toyota 4Runner test platform. The tires displayed their build-quality by needing very little weight.

Having run multiple sets of 255/85R16 tires on this same chassis, I knew a tall and narrower tire was a good-fit, and the Cooper S/T MAXX did not disappoint. As noted above, tread noise is minimal for a tire in this class that offers such a high level of traction, and the tread compound combined with the copious depth promises high-mileage. The few thousand miles I logged prior to this penning has resulted in so little wear that it’s difficult to measure.

My educated guess is that these Coopers will last 3-4,000 miles per 1/32” of tread. If worn to their minimum legal tread depth of 2/32”, that’s approximately 50-65,000 miles, a long way for any light-truck traction tire! Of course this assumes proper rotation, balance, and inflation is maintained throughout the life of the tire plus normal mixed-use driving. This potential service-life is more impressive if value is factored, after which this tire becomes amazing; one online source currently sells the LT255/80R17E Cooper Discoverer S/T MAXX for only $182 per tire.

Spring 2014, was exceptionally dry in my part of the West, but we’re hoping for precipitation in the months ahead, with opportunities to use these tires in something sloppy. Expedition Portal readers may want to check this forum thread for periodic updates from other Discoverer S/T MAXX users:

Because the Discoverer S/T MAXX is reviewed on this backcountry-travel site, I end this article with a question: Is it merely a coincidence that for decades many Cooper light-truck tire designs have been named “Discoverer”?