The Land Rover Defender 110 is, in our humble opinion, the quintessential overland vehicle. They are so charming and quirky that they become more than just a simple conveyance as you travel and explore—a Defender becomes the center of your universe. No matter how many hours you spend driving (or repairing) them, at the end of the day, you will arrange your camp chair so that you can watch the soft light of the setting sun reflect off its dusty, angular body. As these vehicles become scarcer, they have increased in value exponentially, as has their desirability; you have no doubt seen a few examples on the Expedition Portal forums, shiny and new with leather interiors and modern engines shoehorned into their mouths. These are Defenders, but they are not Defenders. Tobias and Manon drive a proper, salt-of-the-earth Defender—as it should be. The following is a vehicle feature, sure, but it is also a bit of a love story. 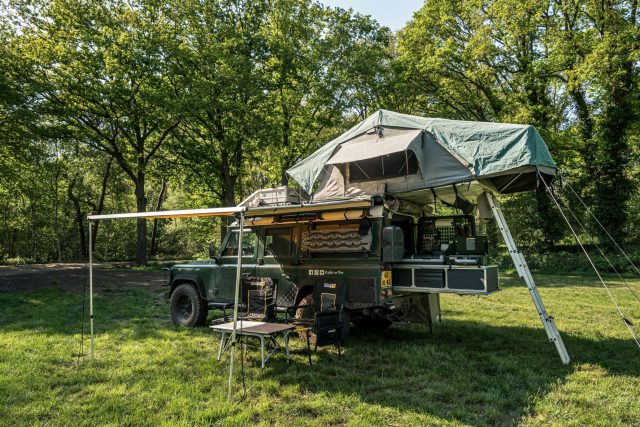 Tobias and Manon both studied applied biology, boulder as a sport, love photography, are active nature conservationists, and are currently traveling through Africa with their Defender 110, affectionately named Rafiki (all loved Defenders are named, rafiki means “friend” in many African languages and in Arabic. Tobias’ previous Land Rover was called Baraka, which translates to “blessed”). Tobias bought the Defender in 2015 as a nine-seater station wagon with the goal of using the vehicle for weekend trips and summer holidays within Europe. In 2017, Tobias and his friend Sven traveled through Southeastern Europe for over eight months, followed by a second expedition from Europe’s most northern point (Norway’s North Cape) to the most southern point (Isla de Tarifa o de Las Palomas in Spain) over a period of almost eleven months in 2020 and 2021. 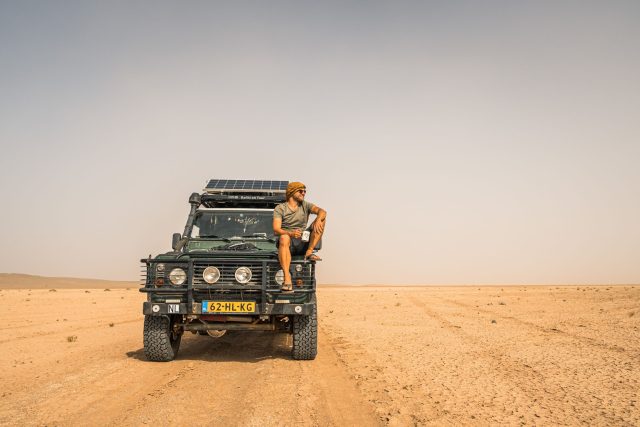 Unfortunately, Sven was unable to commit to more long-distance journeys, and Tobias had to look for a replacement “travel buddy.” After 15 months, Manon responded to an Instagram post (via good friend Sven) and asked whether Tobias was still searching for someone to travel with. Tobias and Manon connected the same week and decided to take on an overland adventure after just their second meeting. They left for Africa two months later, and after spending a significant amount of time side-by-side, through thick and thin, they are now a couple (and we like to think that the Defender is the glue that brought them together). 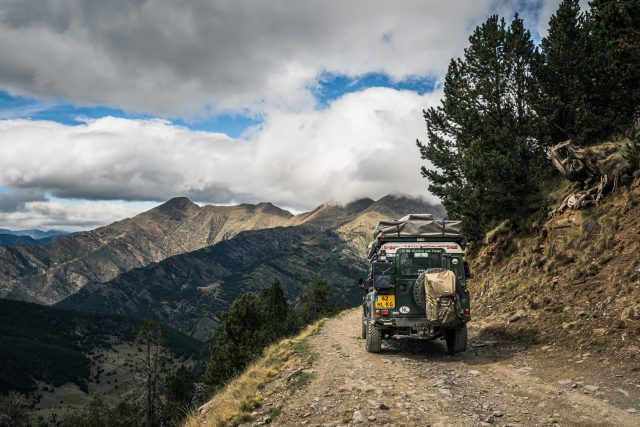 Tobias has always been a Land Rover fan; his first vehicle was, in fact, a Land Rover Series 3 109 Ambulance, which had traveled to Africa multiple times. After those adventures, he used the old, battered Landy primarily for holiday trips to Luxembourg and France but reluctantly decided to sell it after three years. Even as he sold the Series 3, Tobias knew it was just a matter of time before he owned another Land Rover, and the Defender was the obvious choice. 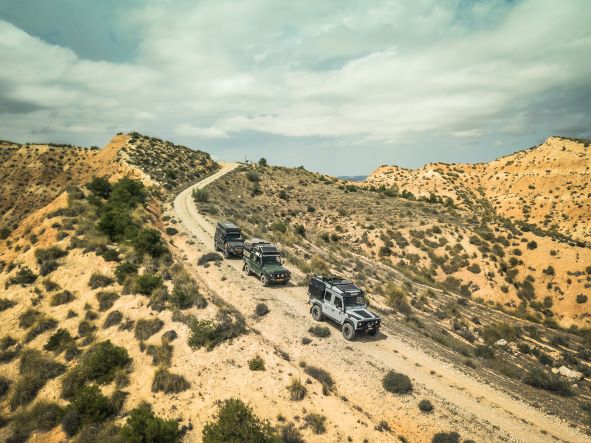 Rafiki the Defender, bought in 2015, went through a few changes on her path to becoming a bespoke overland vehicle. The current build began in earnest in 2020, during the height of the pandemic, and features a new aluminum interior and upgraded electrical system. The design is a combination of online inspiration and the experiences earned over the years, and Tobias worked on the current setup over two periods: the exterior in 2020 and the interior in 2022. 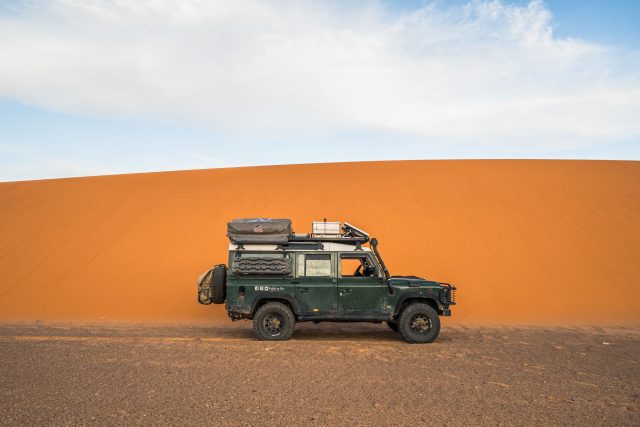 The exterior is simple and well-considered. The roof rack was renewed in 2020 to fit inside a shipping container, and the 110-watt solar panel was added to charge laptops and the fridge. The solar panel acts as a windbreaker, and to the rear of the roof rack are mounted three Zarges aluminum storage boxes, a diesel jerry can, an Autohome/Maggiolina aluminum ladder, and a Tembo 4×4 roof tent. A 250×250-centimeter ARB Touring awning and an OceanCross shower cabin are on the sides of the roof rack. The weight on the roof could be improved, but the couple do not fill the jerry can for shorter journeys and only store lightweight items in the aluminum boxes. 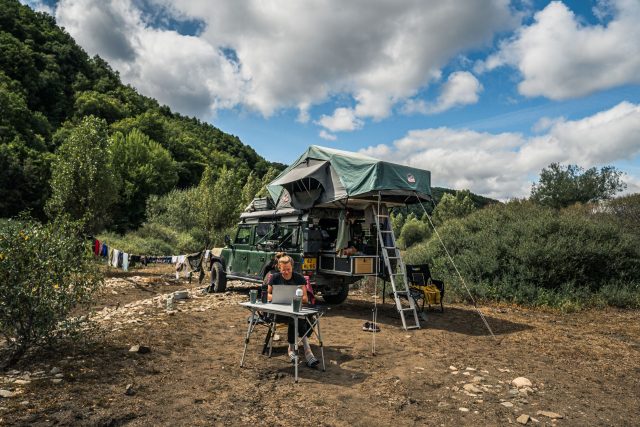 On the hood, Tobias added aluminum chequer plate for sturdiness and used a slow-feeder hay net (for horses) to create a storage solution for the shower bag, which heats up during the day with engine heat and the warmth of the sun. Genius! 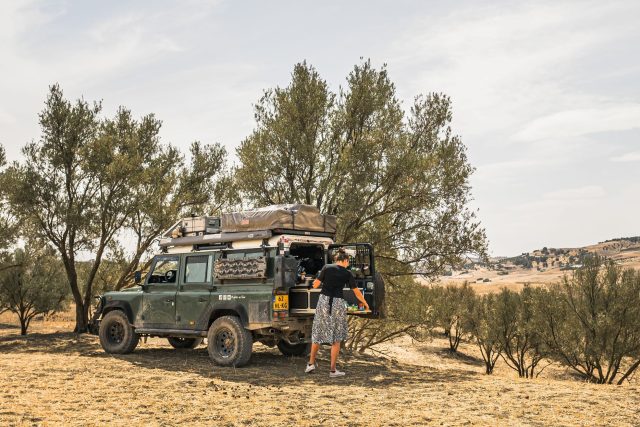 The interior is homemade, lightweight, and functional; the main features are the fixed (but extendable) bed and drawer systems, and the aluminum BSB extrusions provide a lightweight frame for furniture and storage areas (but are not the easiest material to work with). The system has three drawers that are accessible through the side doors and one very practical slide-out kitchen in the back. The 55 x 27-inch kitchen includes a CN Comfort 75-liter fridge/freezer combination and a Coleman stove and oven on the fully extendable drawer slide. Some food, along with pots and pans, are also stored here. 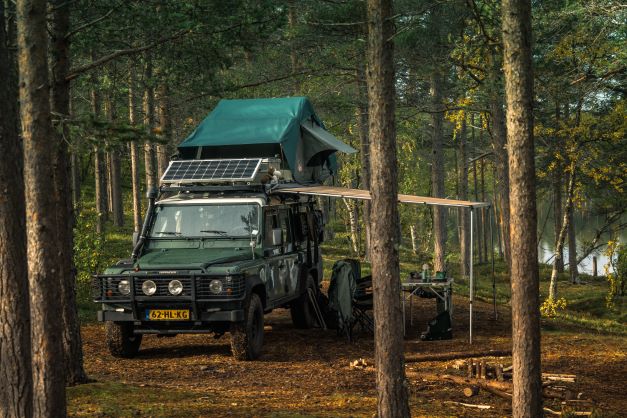 Usually, the couple sleeps up in the roof tent where a breeze may blow, but they are satisfied with the decision to install a fixed bed in the rear of the truck as this is a great refuge when the weather turns or they find themselves having to park overnight in an area which is either potentially unsafe or does not allow for the opening of a roof tent. A pop-top was another option, as the interior living space and ease of use would have been excellent. Unfortunately, the expensive ARB pop top was not a viable option when the vehicle was first purchased, and Tobias rationalizes that they would rather spend money on traveling than overcapitalize the vehicle. 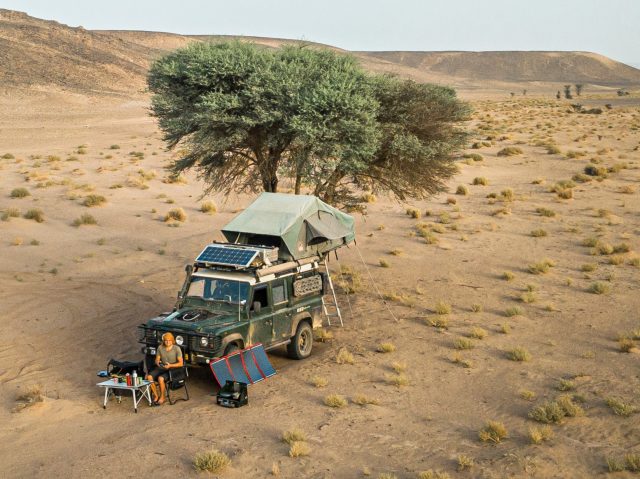 The interior build took much longer and cost more than anticipated, a common reality for DIY builders and even professionals. When asked whether he is happy that they chose to do the work themselves, Tobias replied, “Yes, it’s my own design, built to my experiences, and suits the way I (now we) travel. Building your own rig is awesome, a great learning experience, and it’s good to know the ins and outs when problems are likely to arise on an international trip. My advice? Build your own vehicle if you have the means to. Not yet sure if you have the skills? Acquire them along the way.” 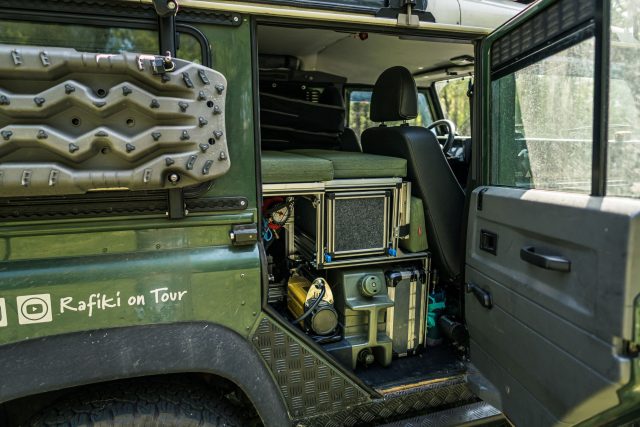 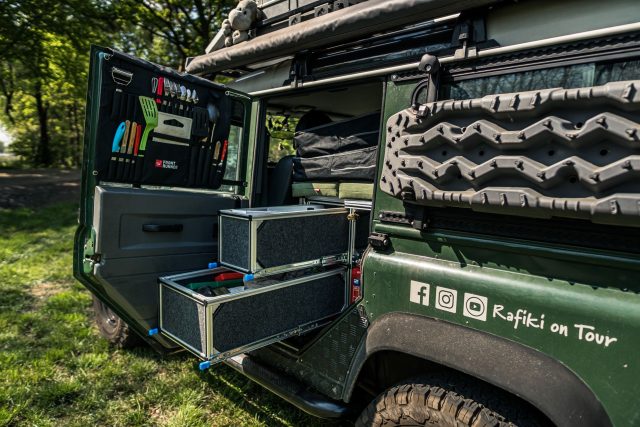 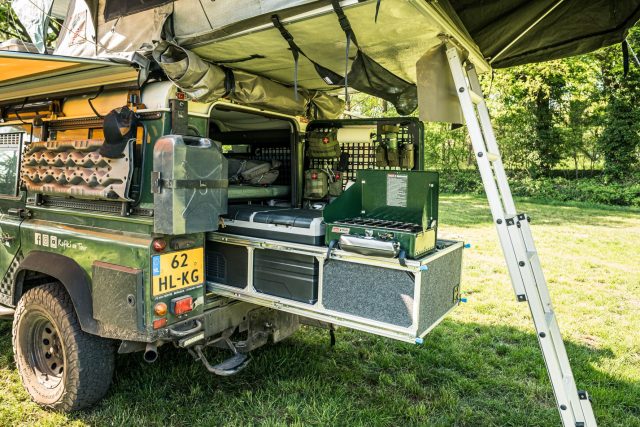 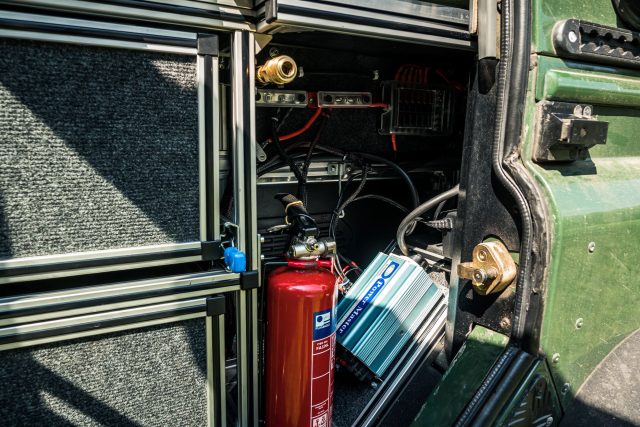 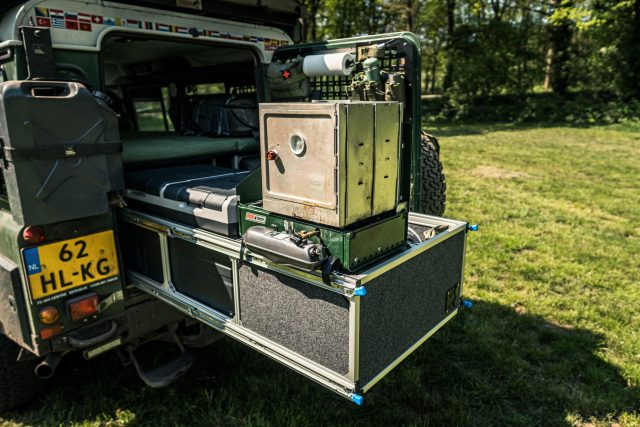 The couple is delighted with the build; everything has its own place, which is ideal when you live in your vehicle full time. But there are plans to make some minor changes, such as modifying the central drawer to allow convenient access to the storage underneath the Coleman stove. Another great addition would be a mosquito room beneath the awning; African bugs are relentless. Other additions would be more charging and storage and a dust-proof drawer for cameras, drones, laptops, and other valuable gear. 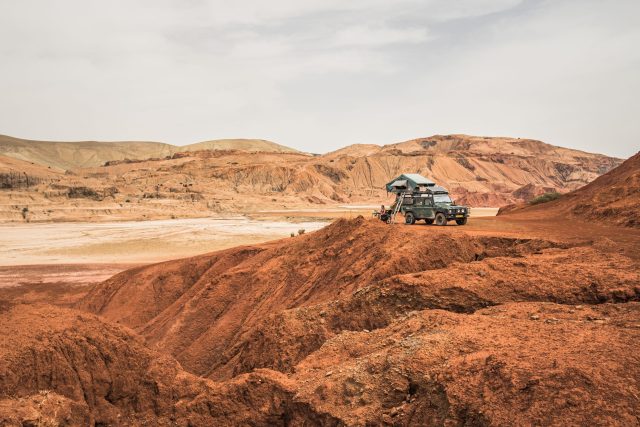 Of course, traveling with a Defender is never a dull experience, and Land Rovers are famous for gradually converting their owners from drivers into mechanics. During the first European trip, Tobias had to replace the water pump five times, shearing off a few bolts in the process, and went through four different vacuum pumps before completely overhauling the engine in 2021. 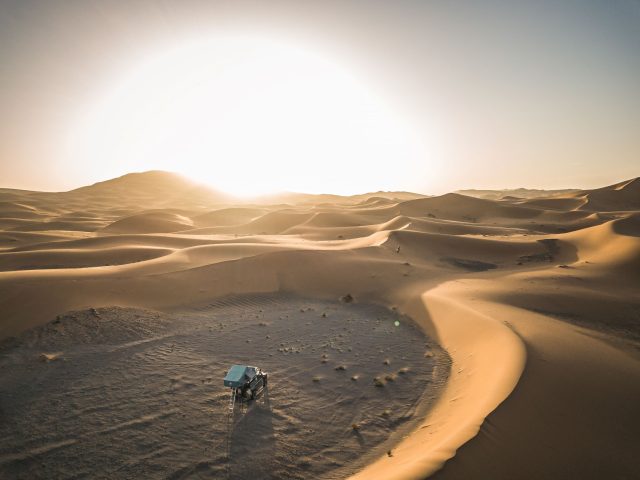 “We try to do most jobs by ourselves so that we can choose the right parts and know what’s been done. So the cliché might be true with the result that Rafiki surely made us a mechanic over the years. The positive outcome of this is that we now know Rafiki so well that we can easily diagnose a problem. Every new sound automatically leads us to a specific place in or under the car for an inspection. We know every inch of Rafiki, which is a good thing on these huge international trips.” 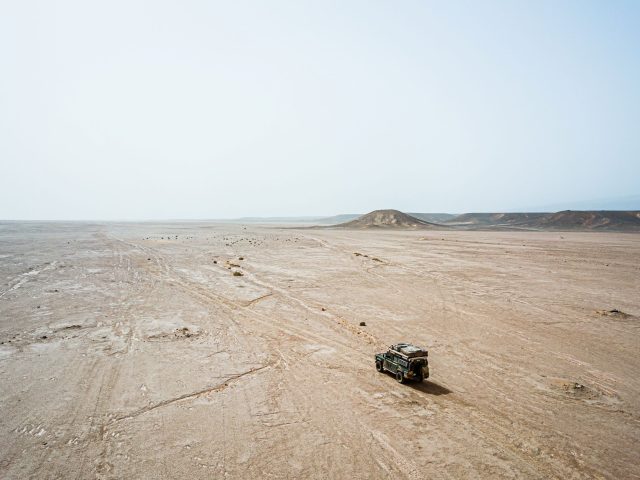 Currently, Tobias and Manon are traveling along the West Coast towards South Africa, from where they will drive northward to Kenya over the next two years. Either they will then drive to Ethiopia, Sudan, and Egypt or will ship to Oman and drive back home to Europe through the Middle East. And then? Time will tell. Asia and the Americas are a distinct possibility, and Canada is one of Manon’s favorite countries. The sky really is the limit. 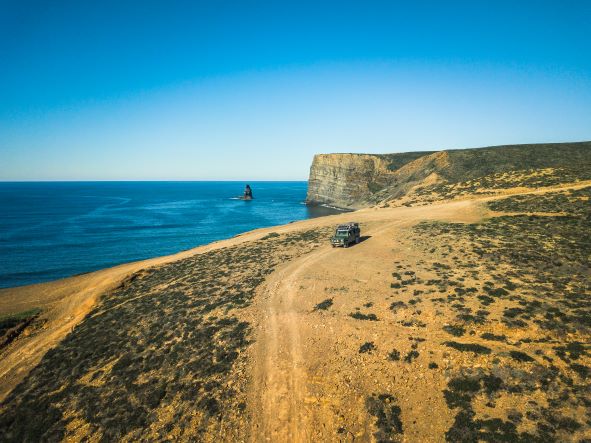 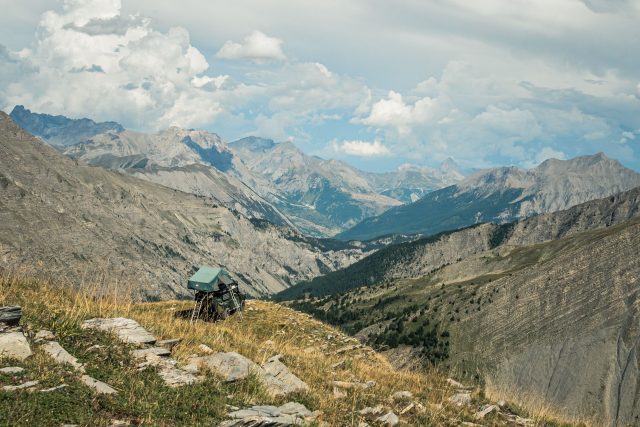 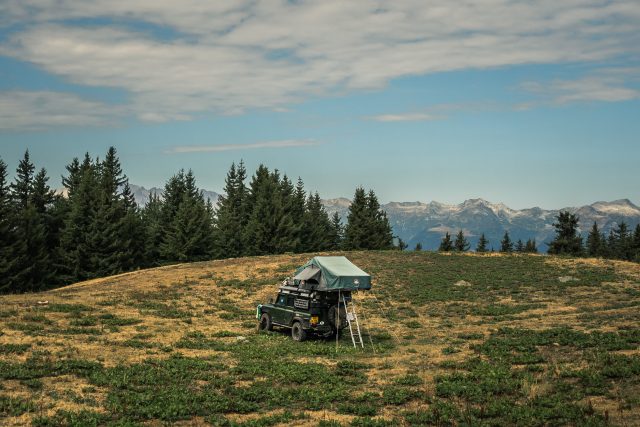