In a sea of Tacomas and rooftop tents, it’s always refreshing to spot a one-of-a-kind vehicle build. This 1982 Toyota Chinook 4×4 conversion is indeed unique, and like the Creature from Frankenstein, it is a composite of body parts grafted together and reanimated by the use of electricity, a ton of heart, and some fuel for good measure. This custom overland vehicle is the realized vision of Alaskans Austin and Ashley, who travel with their dog Ivy, and have their sights set on Ushuaia, Argentina.

Austin and Ashley began the build in 2018, combining a 1982 Toyota Pickup with a 1977 Chinook Motorhome. With a rear axle from a 2001 Tacoma, a secondary Ford fuel tank, and a 3.4-liter 5VZ engine from a 1999 4Runner, this Chinook conversion brings the best of many vehicle components together, resulting in an eye-catching pop-top with bright blue accents and retro decals. Care and thought have been put into the details, including a retrofitted center console, 3D-printed cup holders, and a countertop accented by a set of vintage Alaskan maps. 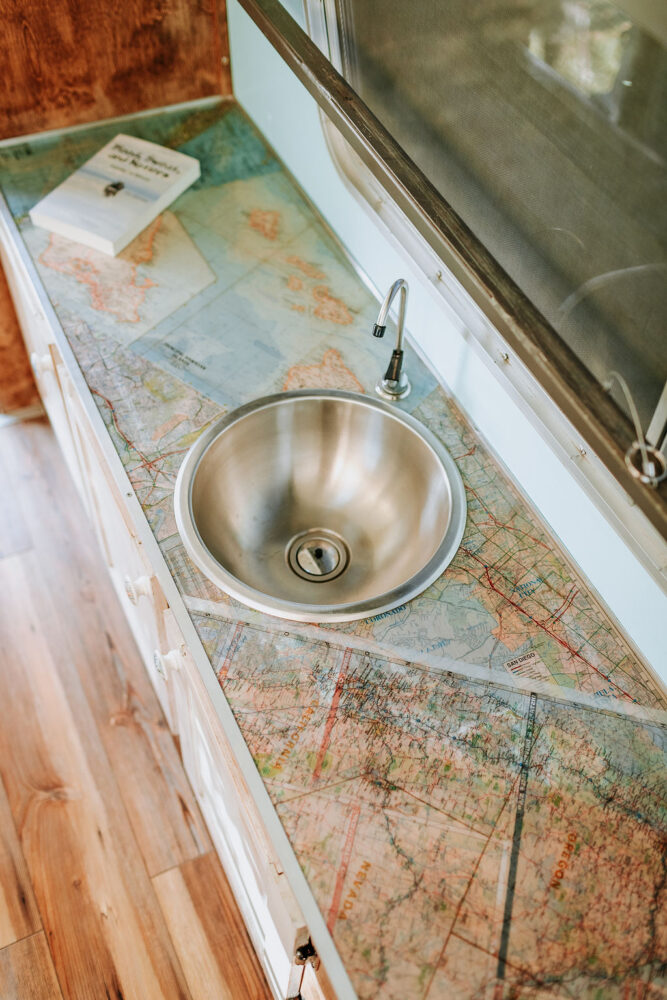 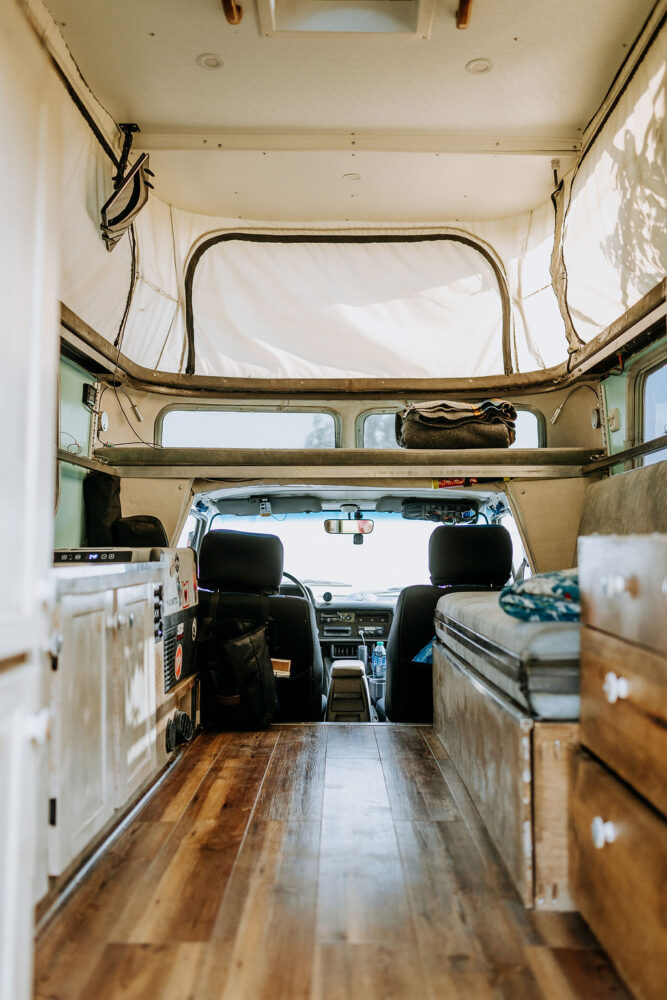 The couple encountered many challenges during the build process, including struggling to keep their rented shop space warm during forty-below winters in Alaska, learning how to do fiberglass work on YouTube, and having to ship the truck to the contiguous US. Despite these challenges, however, the vehicle feels like home. “I just love how unique it is,” Ashley says. “No one else has anything like this at all. Even other people who have Chinooks don’t have exactly this [one] because we’ve added all of this weird random stuff to it.” Austin appreciates the capability. “We’re able to park anywhere and drive everywhere,” he says.

Austin and Ashley have been road tripping within the state of Alaska since their high school days. “It was only on long weekends,” Ashley says. “There was never enough time, and it’s not like we could get out of Alaska because that’s how long it would take us to cross Canada.” The couple liked the idea of a longer-term trip but put it off. Two years ago, they decided to commit to a lifestyle change and planned for South America. “We just saved every penny, but every weekend we had off, we were working on the truck. If we weren’t working on the truck, we were at work or sleeping,” Austin admits. As their savings grew, the trip slowly became more real. 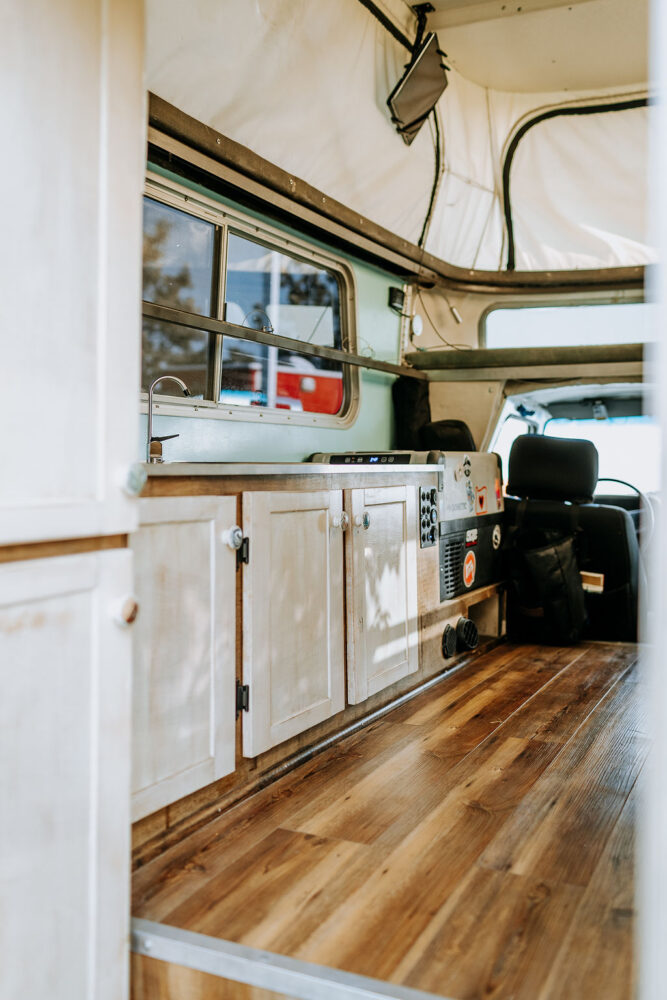 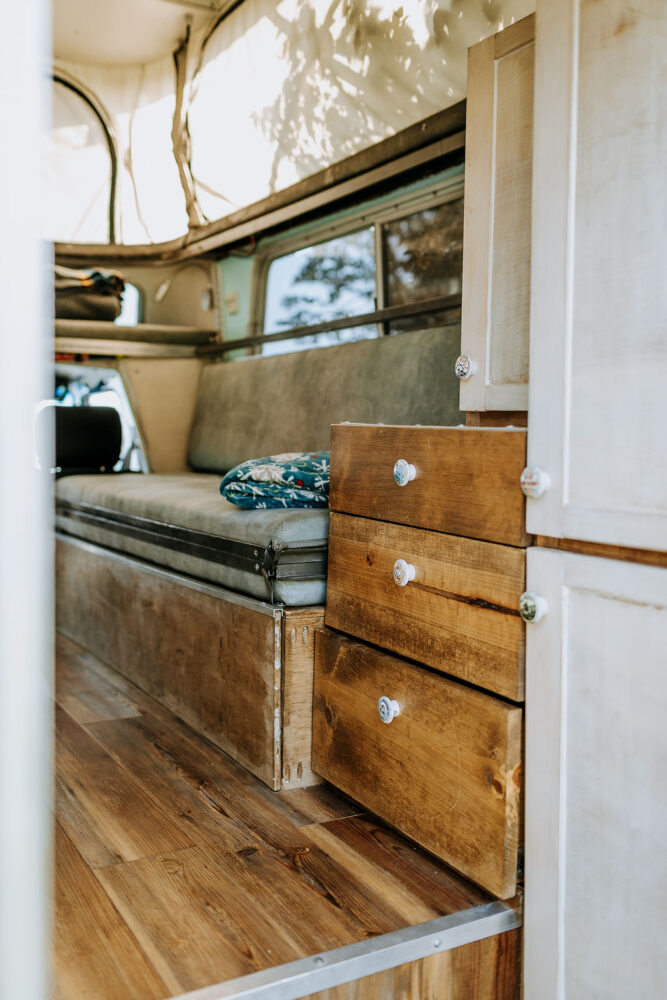 The Chinook conversion came about due to a camping trip they took with a Tacoma and teardrop trailer. “We decided we hated towing a trailer all the time,” Austin admits. “If we got to a dead end, it was hard to turn around, and you can’t [easily] park in parking lots. I had seen Toyota Chinooks built onto a 4WD chassis, so I just figured if I saw one, I would definitely get it. This one happened to come for sale, maybe a week after our first camping trip. So, I decided to pick it up, sold the teardrop trailer, and started tearing [the Chinook] apart.”

The couple was drawn to the Chinook for the pop-top and lightweight fiberglass shell, but the reason behind the conversion stems from a bit of Toyota history. “The Chinook was made in 1978—the last year they were made,” Austin explains. “But they didn’t make 4WD trucks back then. Toyota started making them in 1979. So that’s why we went for the next style cab, which is the ’82. It has a little bit more room, and it’s a bit taller. I’m six-foot-two, so I need the height.” 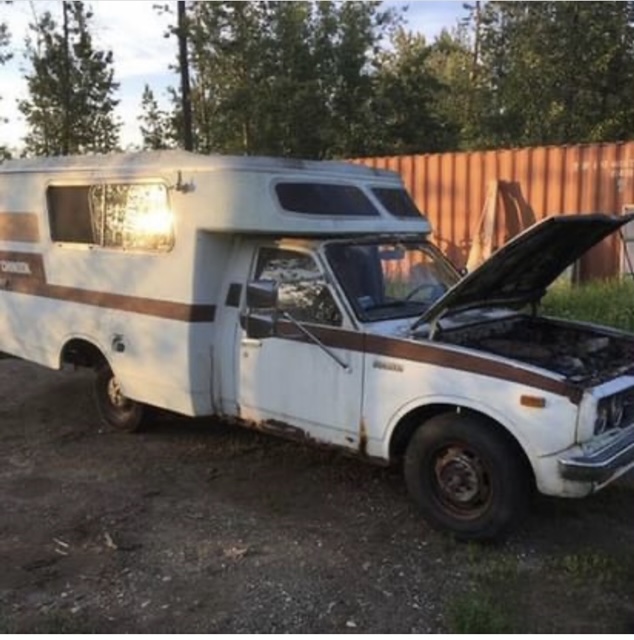 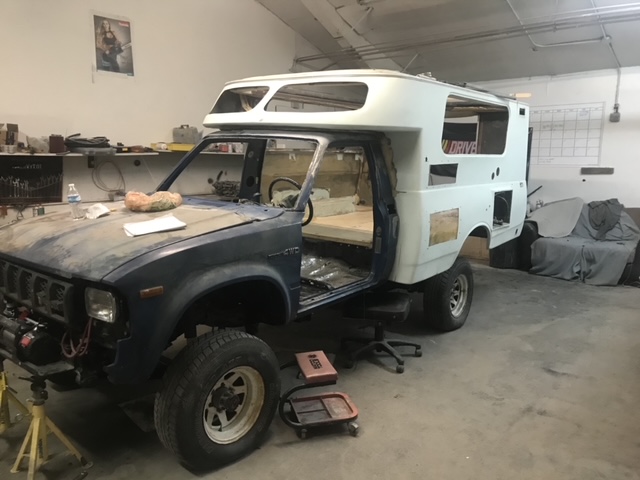 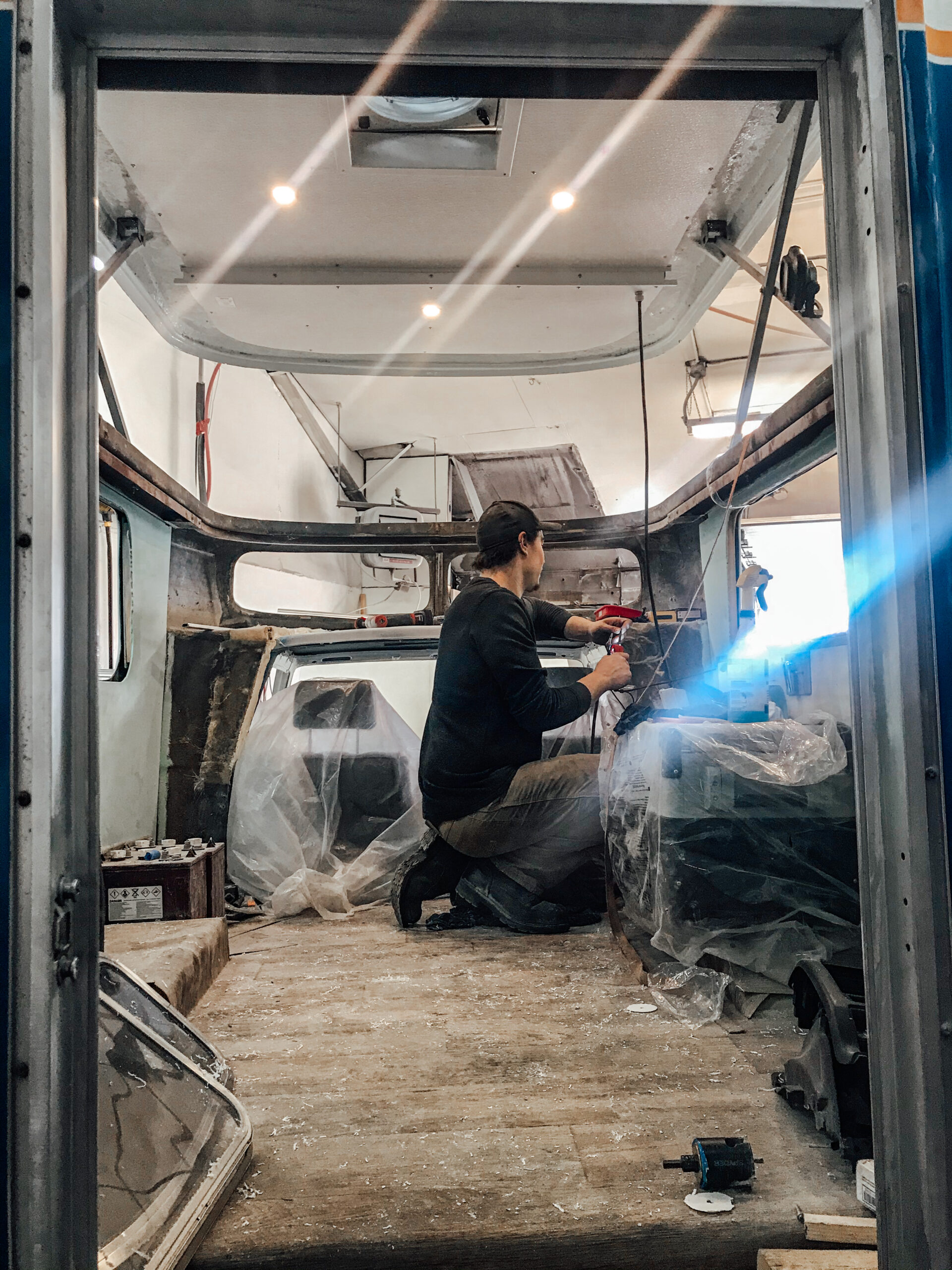 Austin added a drivetrain from a 1999 4Runner for two reasons: “It has the power to [run] on highways at normal speeds uphill, and I know this 3.4-liter engine well. I’ve rebuilt them multiple times and know I can fix it anywhere.” The couple also installed an Old Man Emu heavy suspension system. “It’s identical to the stock suspension, so if something ever breaks, we can just get a stock replacement,” Austin explains. “The heavy-duty suspension can also support the weight of the vehicle. We’re a little bit over 6,000 pounds. I would have liked some custom springs that are longer and ride smoother, but parts availability made that decision.” 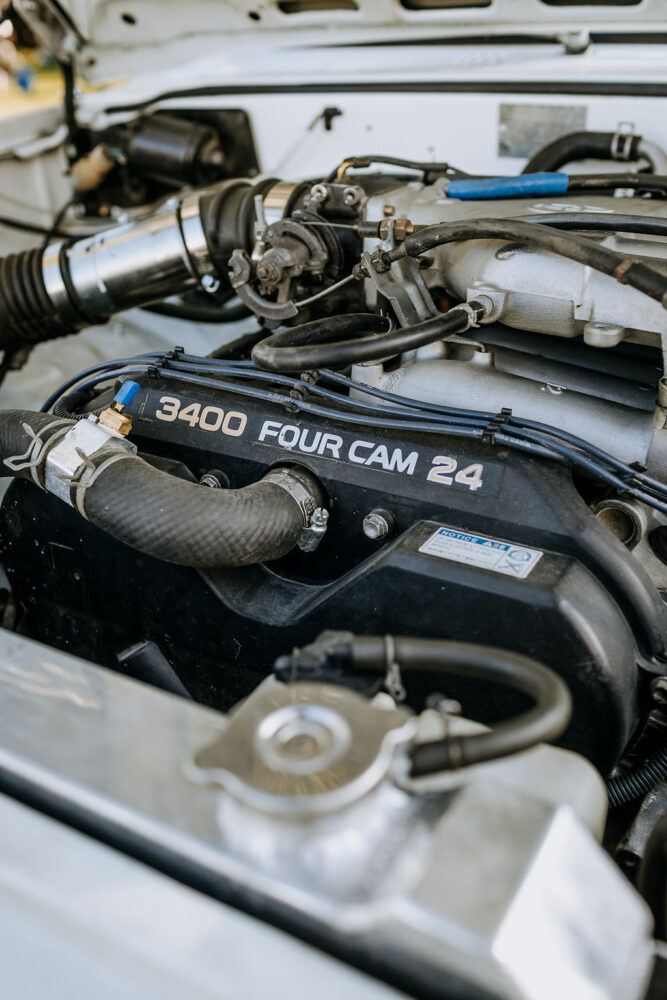 To manage the extra weight, Austin says they chose 1/2-inch plywood instead of 3/4-inch, decided not to add sliders, and went with lighter weight bumpers. “Knowing that we upgraded the drivetrain, [installed] good suspension, reinforced the frame, and upgraded the rear axle, I felt like it could support the extra weight.”

Knowledge from shop classes in his freshman year of high school plus combined work experience in the construction industry primed Austin for the conversion build; however, the fiberglass work, electrical system, exterior paint, and canvas were outside his comfort zone. “There were so many projects where we were like we hope this works!” Ashley says. “We would try to teach ourselves how to do it, and we got into it unsure of what we were doing. For the most part, the only things we had to have done by someone else were the paint job, the canvas, and the upholstery for the bed.” 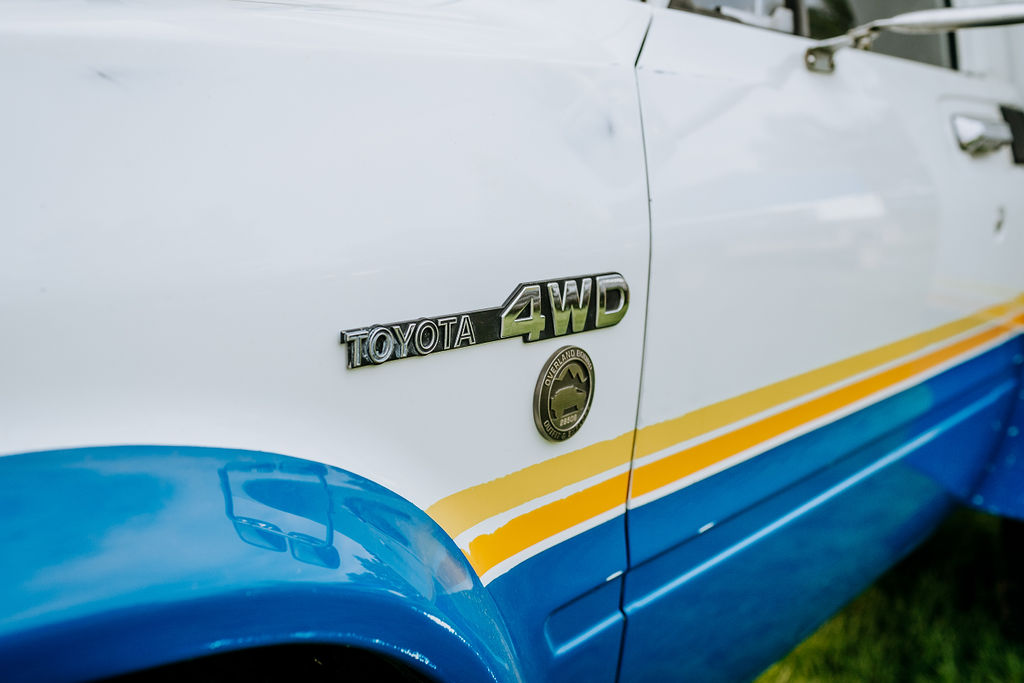 Now, the couple is exploring the contiguous US, visiting various Overland Expo events along the way. As for any changes to the build, Ashley says the interior cabinetry could use an upgrade. “If we had an unlimited budget, I think I would pay for someone to professionally re-do the interior because neither of us is good at woodworking, so every angle is a little bit off.” But that’s just splitting hairs. “We’ve got living space, we can stand up, we’re not cramped, and we can go off-road,” Ashley says. “Pretty much the only thing we’re limited by is height and width, and half the time, we force ourselves through anyways. We love that you can find parts all over the world. It meets all of [our] requirements.” 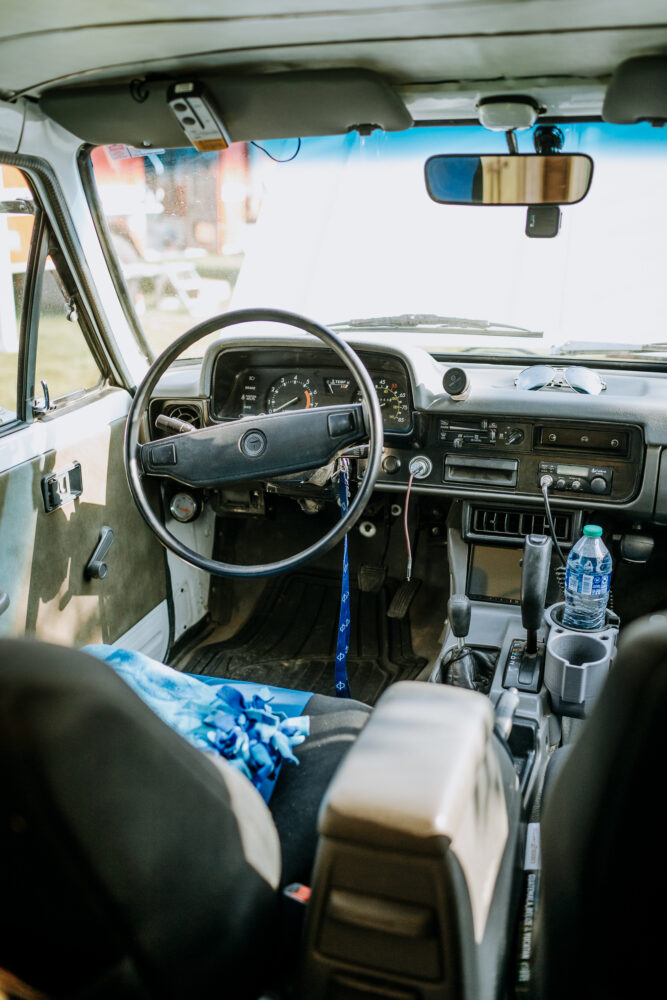 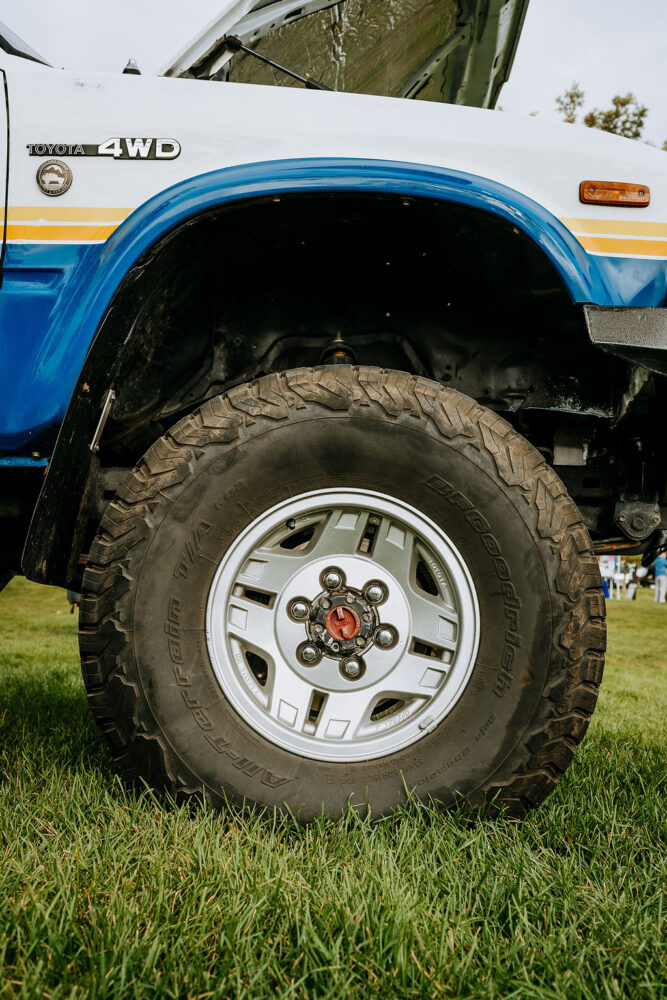 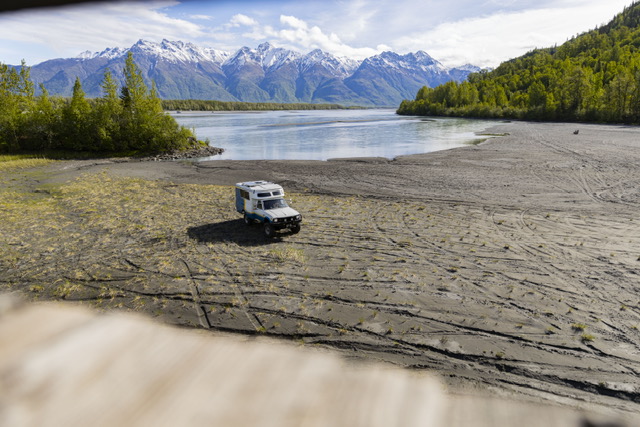 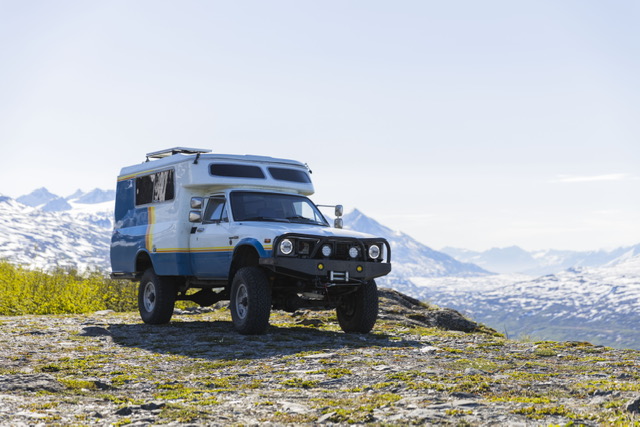 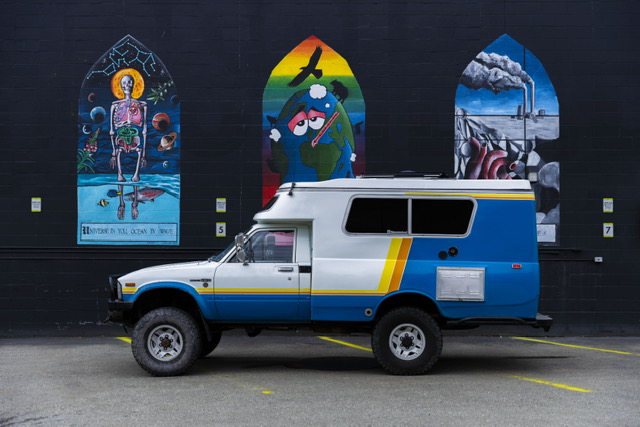 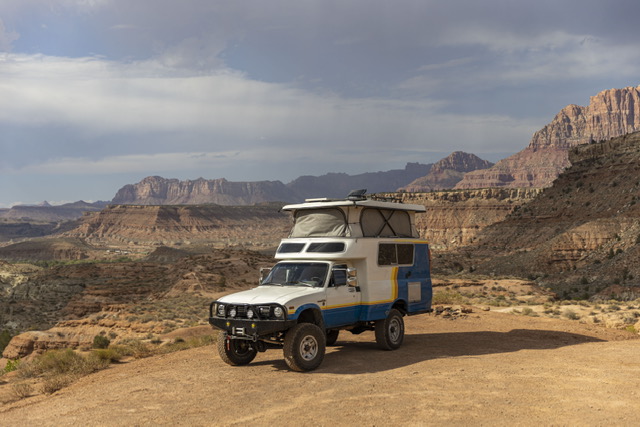 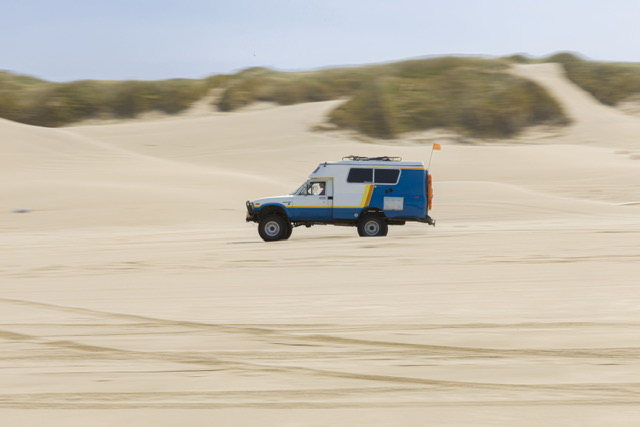 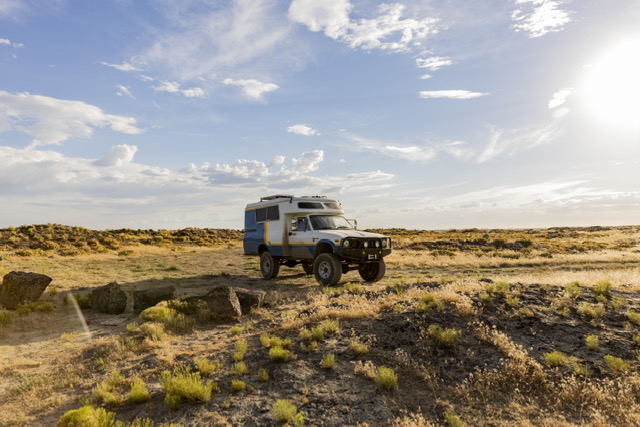