Whether she’s skydiving, jumping out of helicopters in a giraffe onesie, or riding her Yamaha TT-R230, at the end of the day, Cristin Whetten returns to the 2015 Toyota Tacoma that she calls home. Known as Badass Brunette on Instagram, Cristin bought the truck brand-new nearly seven years ago, admittedly knowing nothing about offroading, camping, or overlanding. Nonetheless, she started attending meetups and trail rides, saw vehicle modifications of all kinds, and, over time, realized the direction in which she wanted her own to go. The current version of her Tacoma build has been years in the making and affords Cristin the opportunity to be as self-reliant as she chooses.

Cristin outfitted her 2015 Toyota Tacoma TRD Sport with a Vagabond Outdoors Drifter camper and custom drawers, which provide much of the space’s organization. An Advantage Trailer holds large items such as her dirt bike, paddleboard, and exercise equipment. “Where the camper build sits now has been a combination of recommendations from folks and me just being curious and trying something out,” she says. “It has been such a process of trial and error. Some things have worked and some have been changed. It’s been an evolution and will continue to be. There’s definitely room for improvement, but I’m pretty content and happy with how the camper setup has turned out. It works incredibly well for my needs right now.” 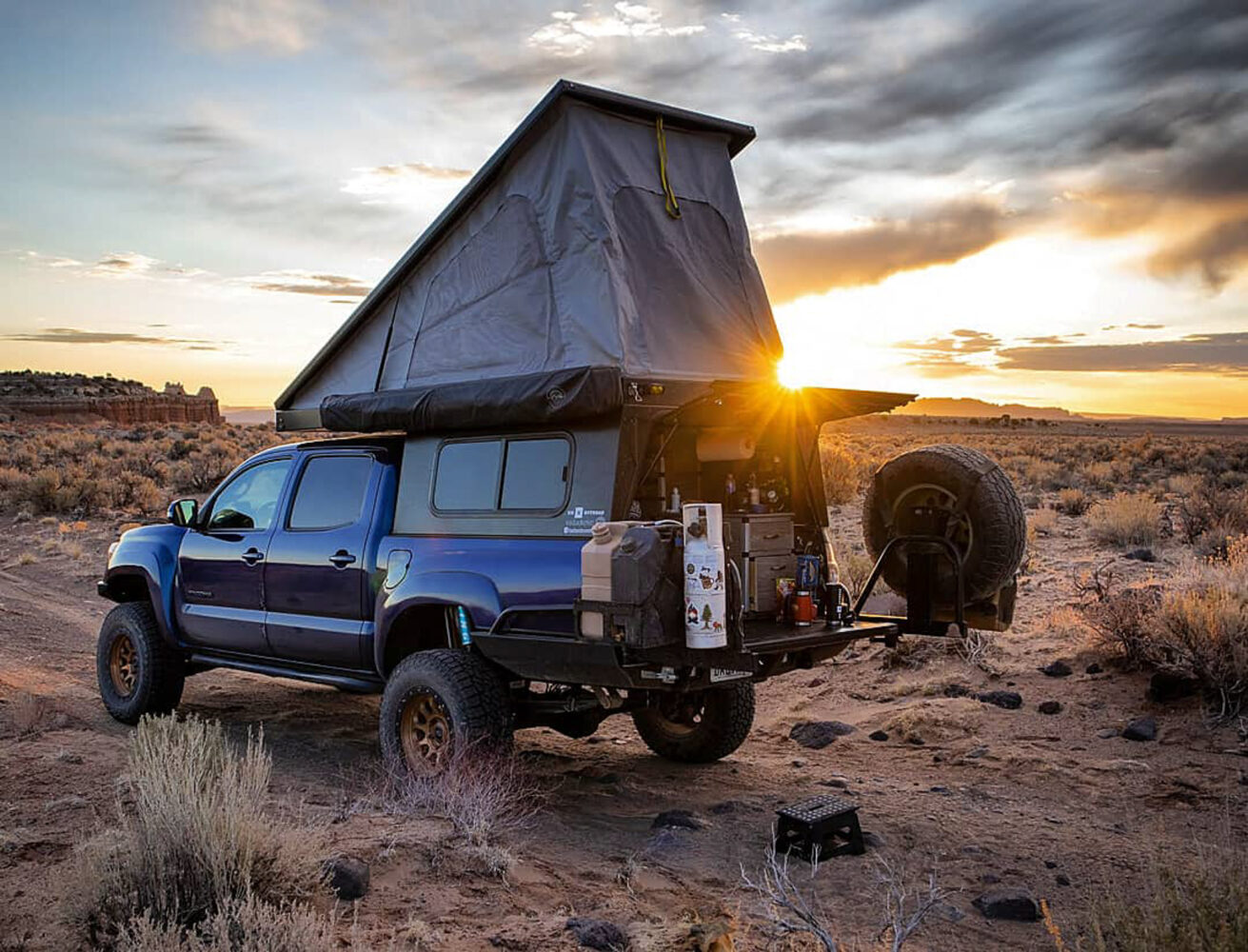 “I have a Drifter camper from Vagabond Outdoors. There were a handful of reasons I chose this camper, but they were all based on the question, ‘Could I live on the road full-time with this camper?’ Reasons included the incredible ease of setting up and putting [it] away by myself, the hard sides that offer greater protection and keep the dust out, insulation capabilities, and being able to build the interior out as a liveable space.

I use bedding, and it stays up in the camper at all times. During the warmer months [I use] sheets and a down comforter. During the colder months, depending on the temperatures, I’ll add a down or fleece blanket to the stack. For extra brisk nights, the heated blanket makes an appearance.” 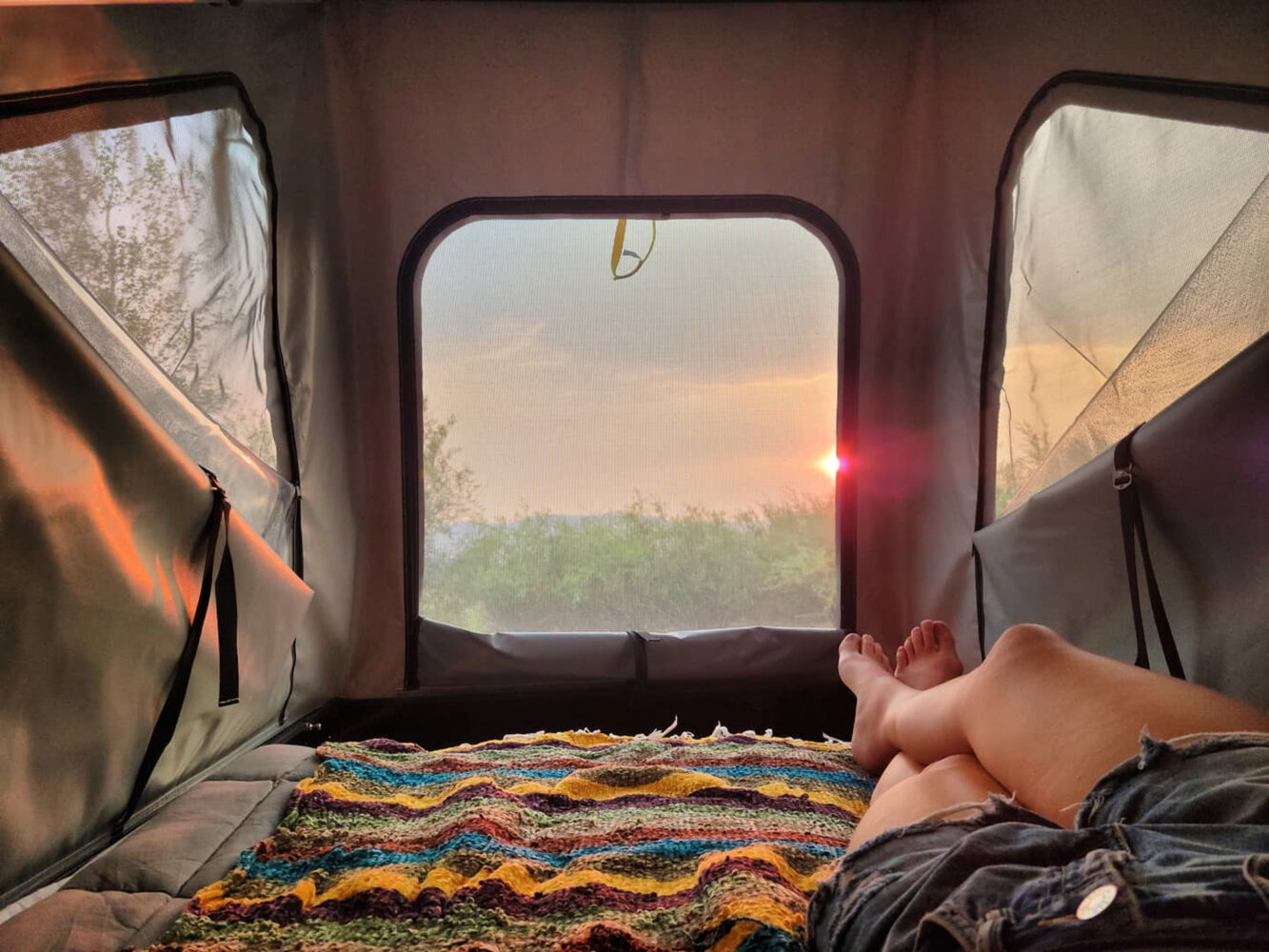 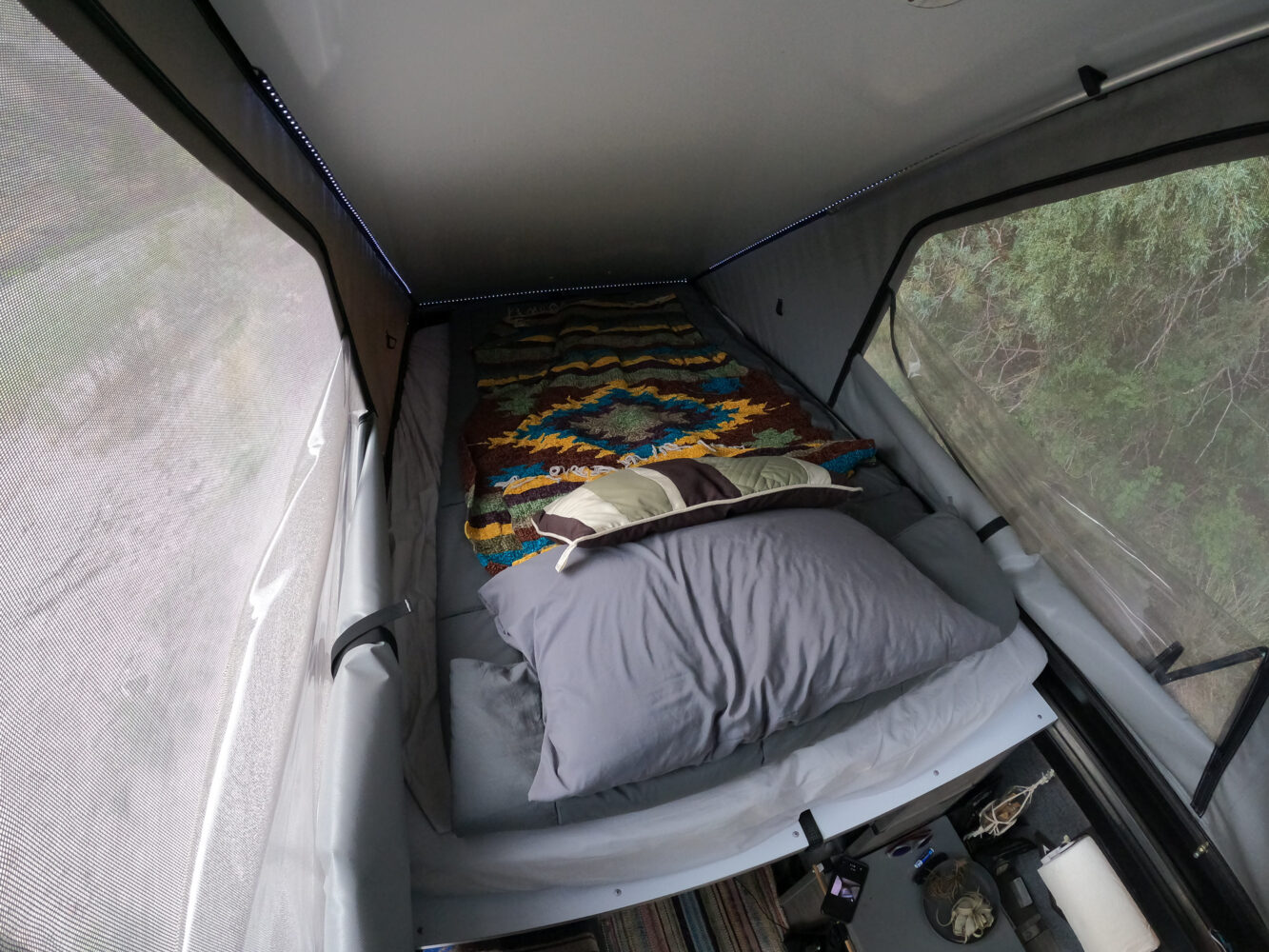 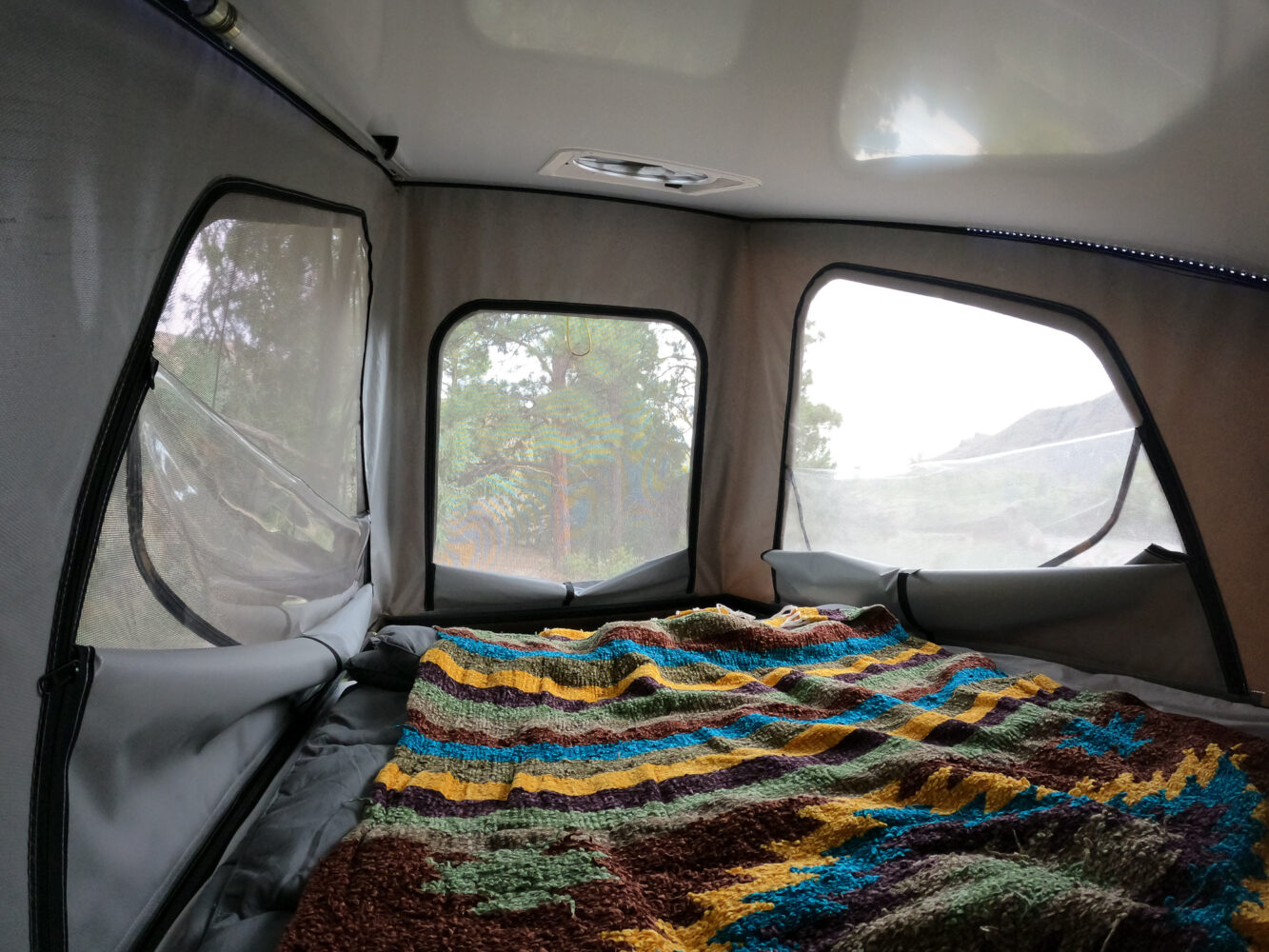 “Most of the inspiration for this build came from Brett and Liz of Our Overland Life’s old Tundra/Flippac build-out, plus some other Drifter build-outs that were spotted on the Tacoma World forum. Brett and Liz not only inspired my drive to live on the road full-time but from structural to decorative, they were my top resource and biggest guidance with it all.

The greatest thank you is to Drew Sterling for his help with the camper build-out itself. He is a contractor by trade, so he knew exactly how to build the two slide-out drawers on the passenger side. We did the rest of the framing, benches, and build-out together. Drew and I spent some very long hours under his carport in the middle of winter, bringing the vision to life. I couldn’t have done it without his help, so big credit to the creation is for Drew. Primary materials were 1-inch aluminum square tubing, Estos connectors, and 1/4-inch birch plywood as the panels. The cushions were also handmade. I took 3-inch foam, cut to bench size, and hand-sewed Mexican blankets as covers. 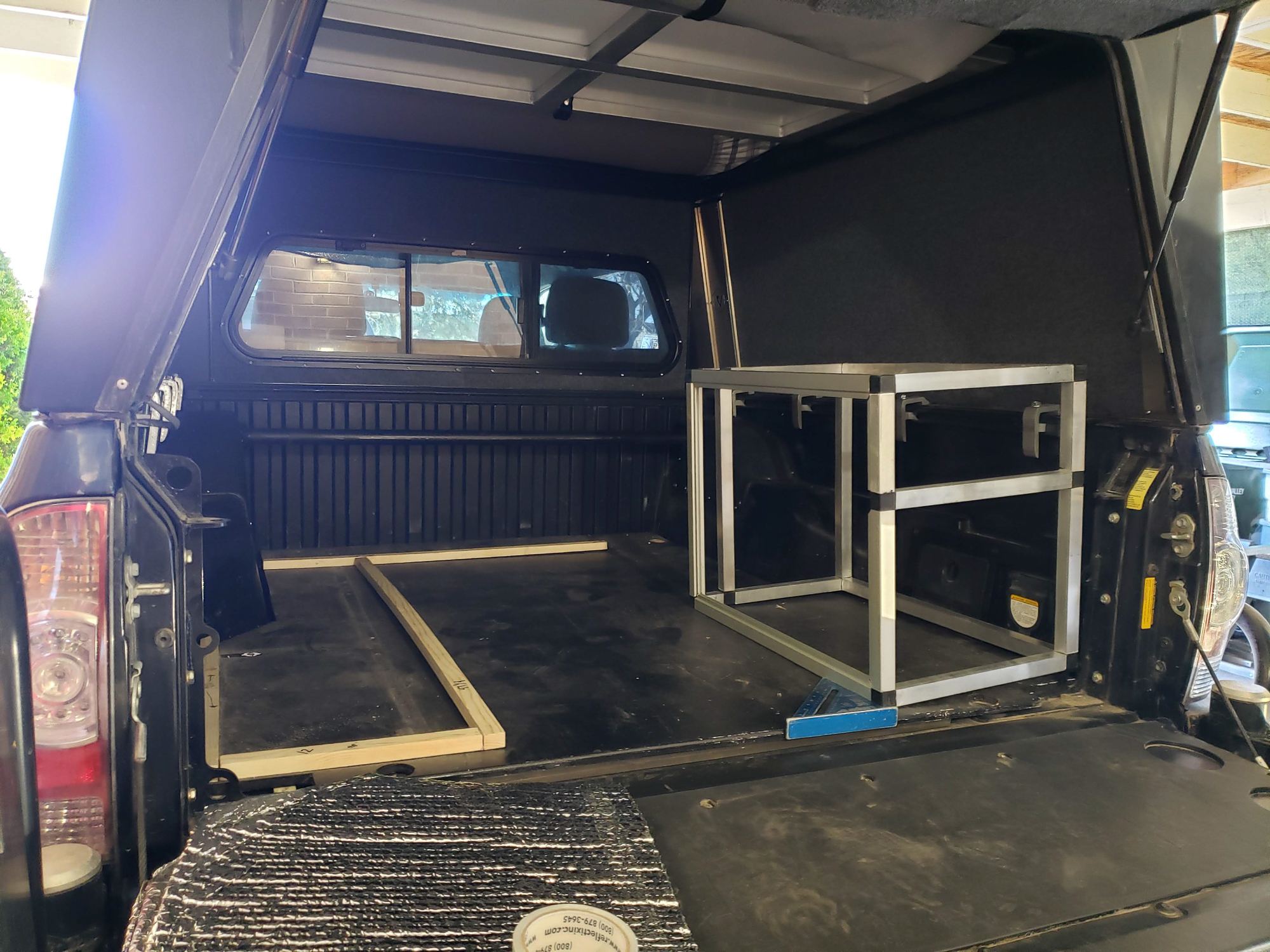 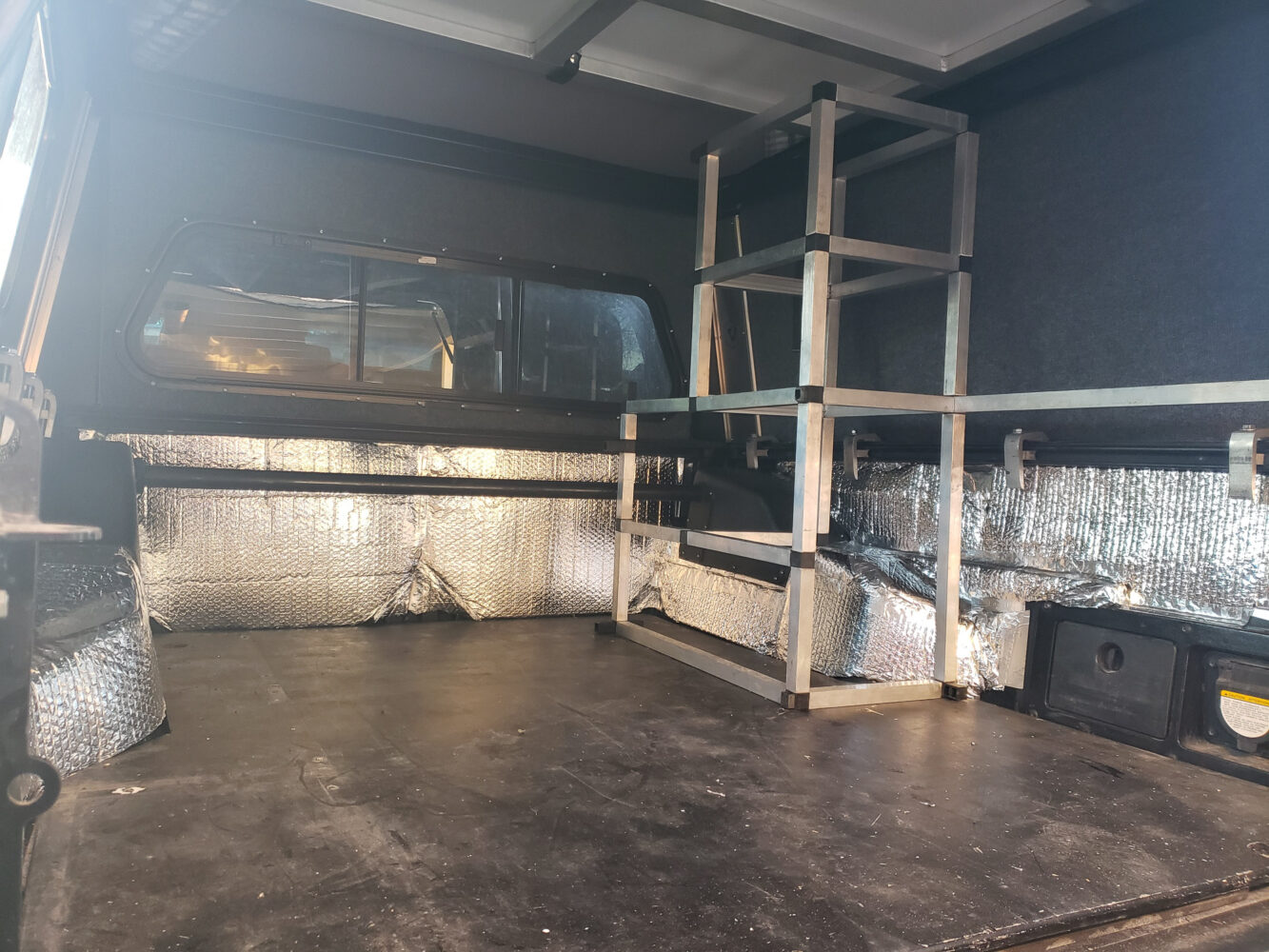 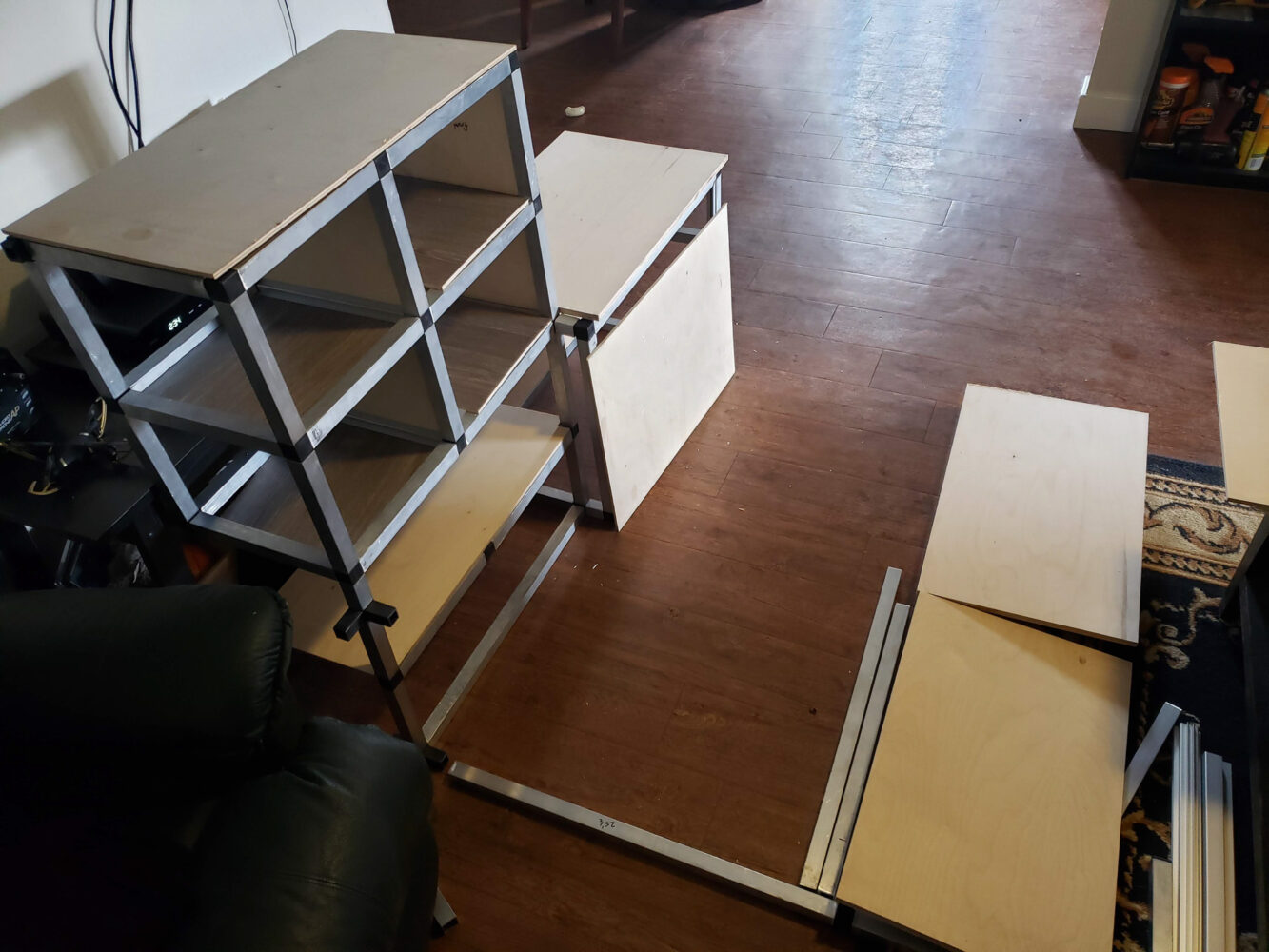 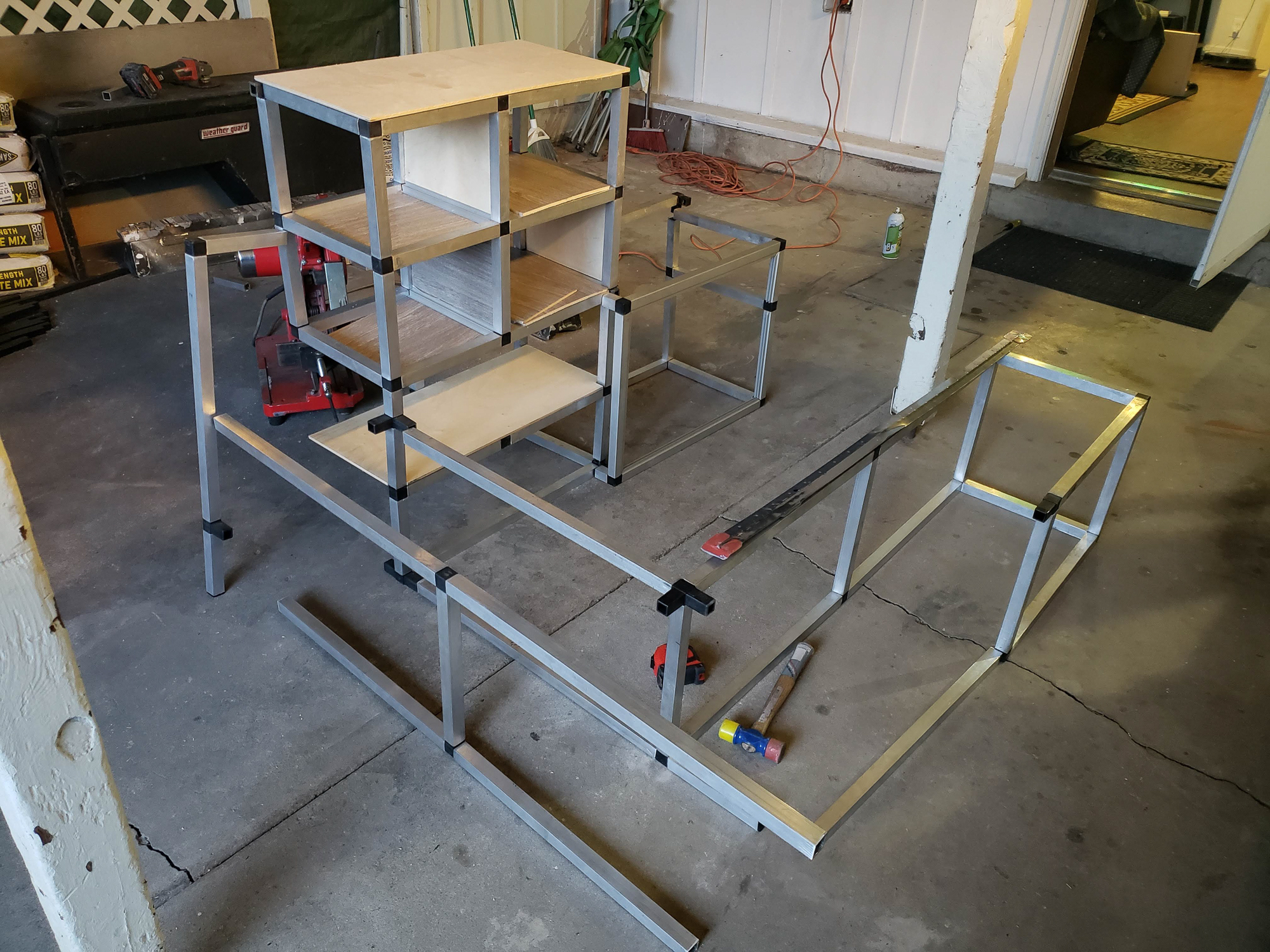 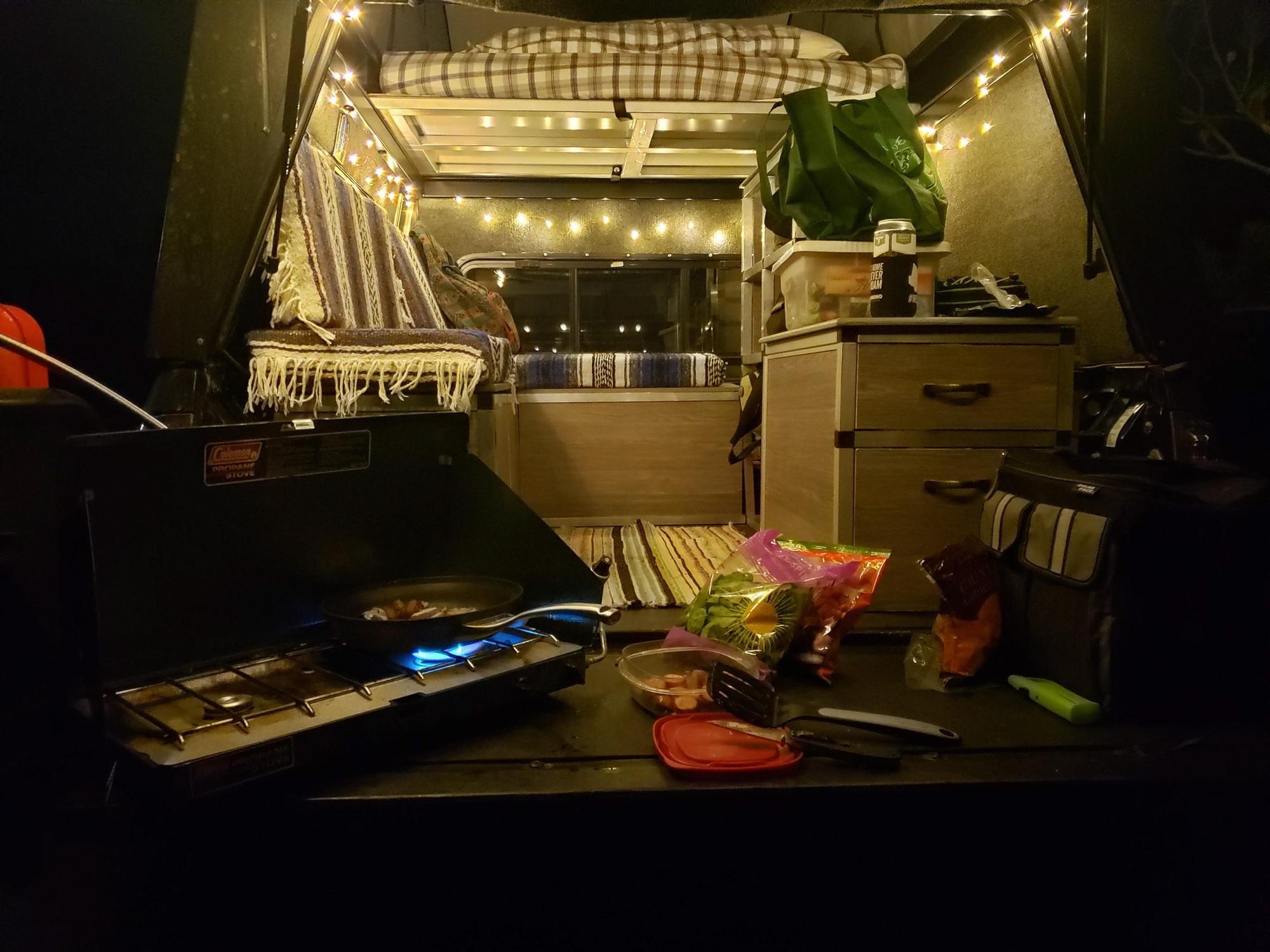 I use one of those two-burner green Coleman stoves for cooking. It’s dated and old, not fancy at all, but it still works! It resides in a little cubby on the left (driver) side of the camper. On the passenger side of the camper build, I have two drawers. The top one has all the coffee essentials: Jetboil, Black Rifle Coffee Pour-Over Kit, and mugs/cups. The bottom drawer keeps things like the sauté pan and lid, cutting board, BlendJet, French press, and propane hoses. Dishes get washed by hand, so no sink setup or anything. I have a little camp kitchen ‘rack’ from Overland Gear Guy that holds spices, utensils, knives, etc. This hangs inside the camper when traveling but hangs off the spare tire mount when at camp and makes for easy grabbing while cooking. 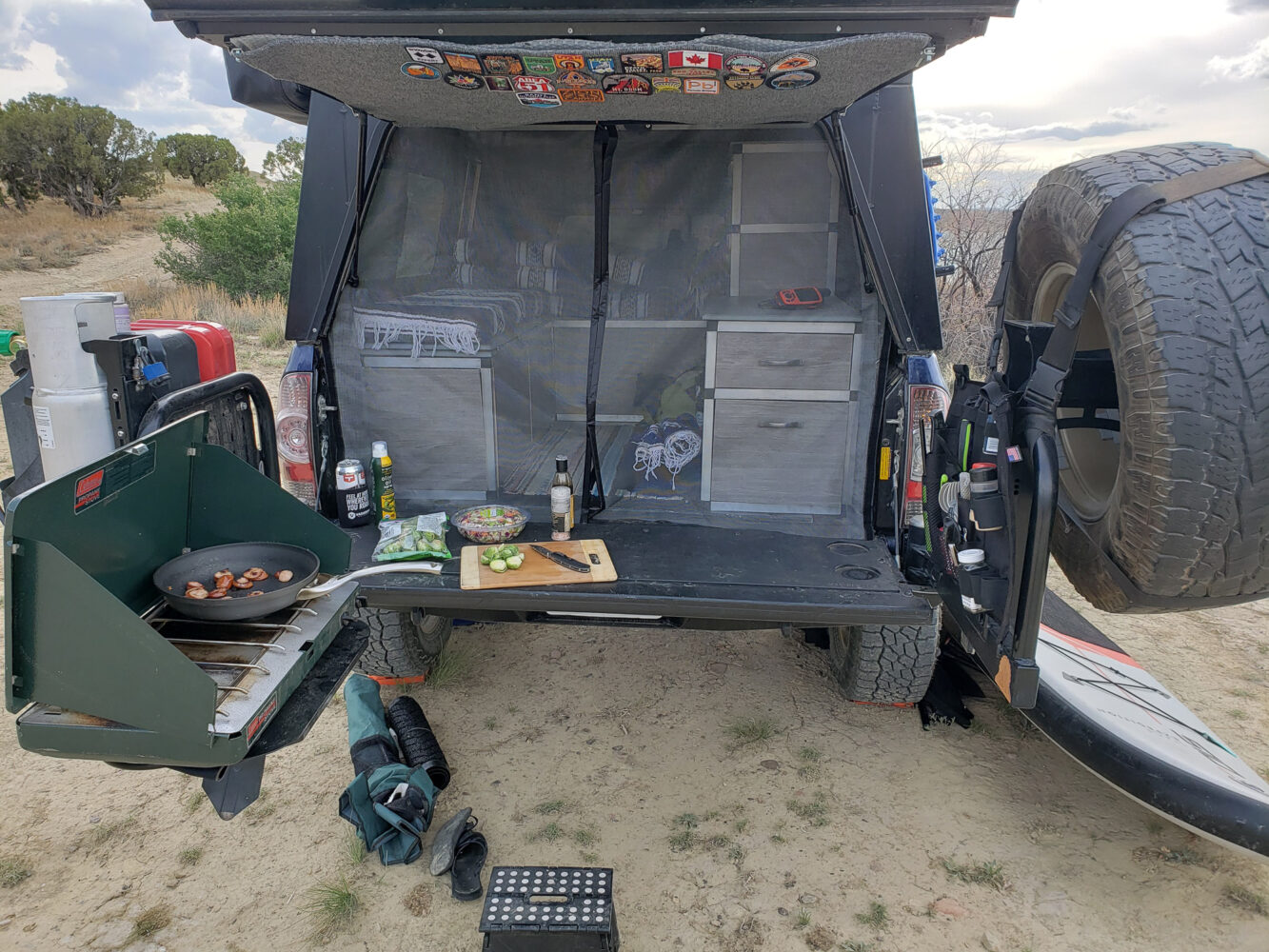 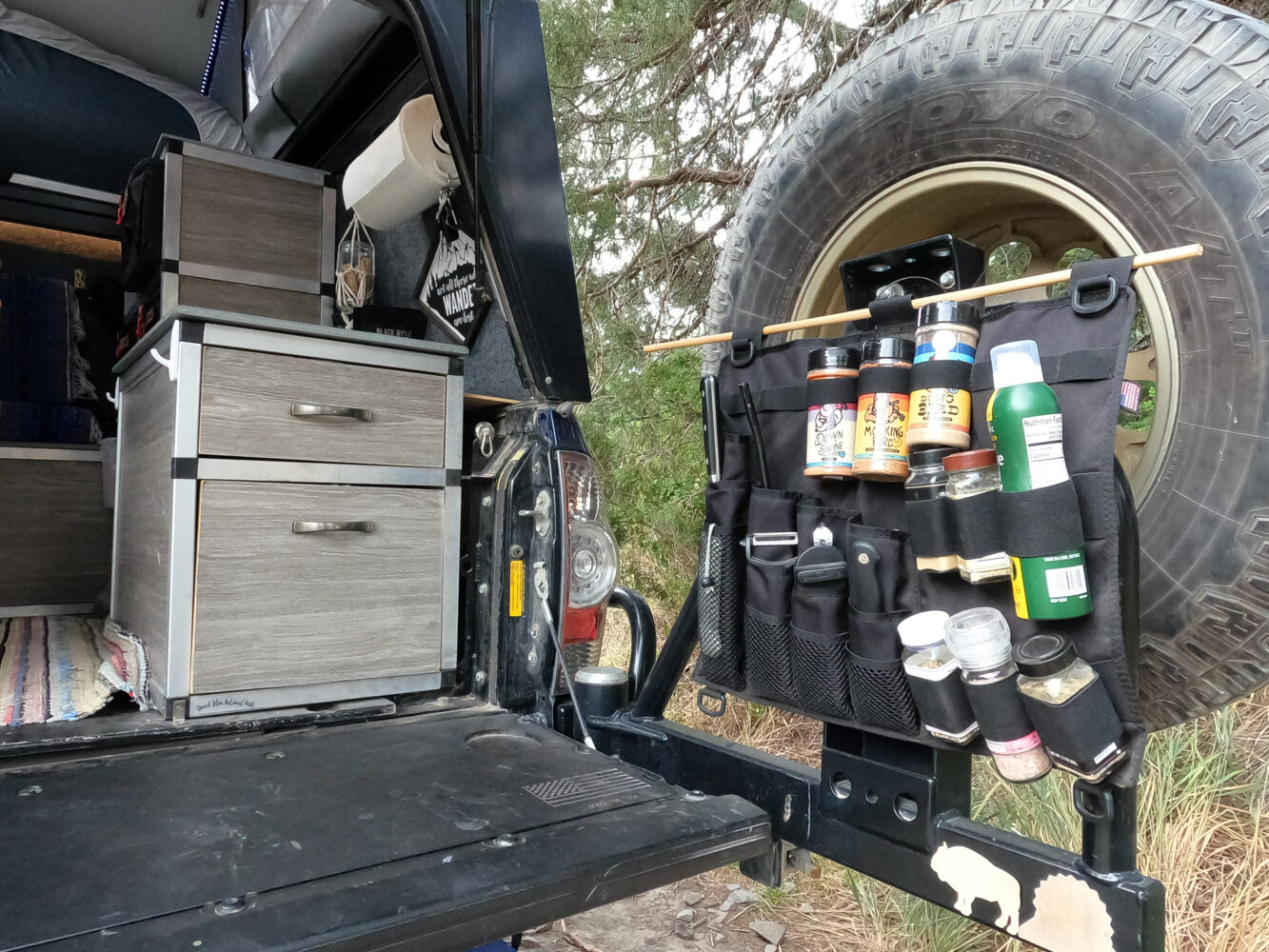 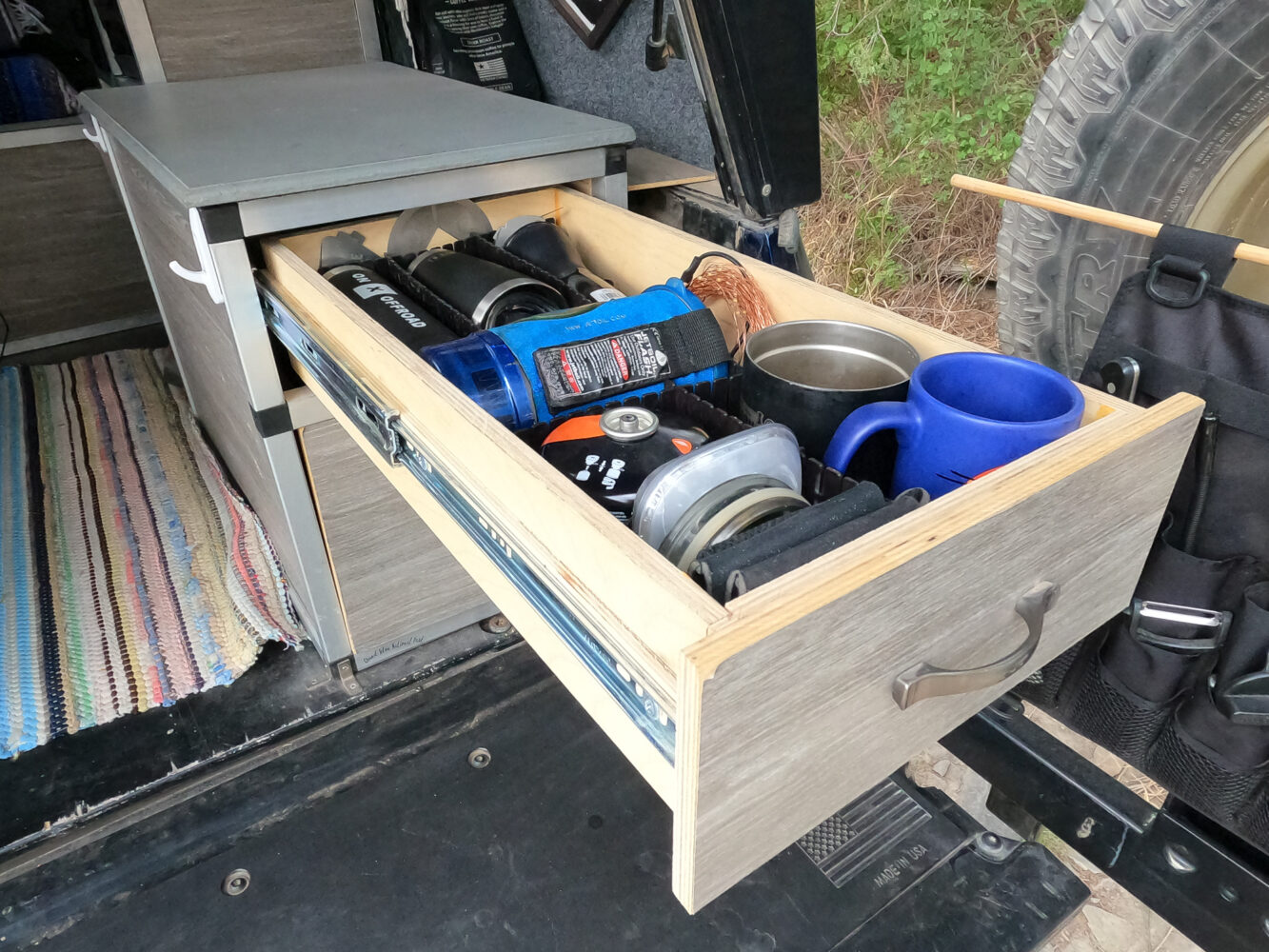 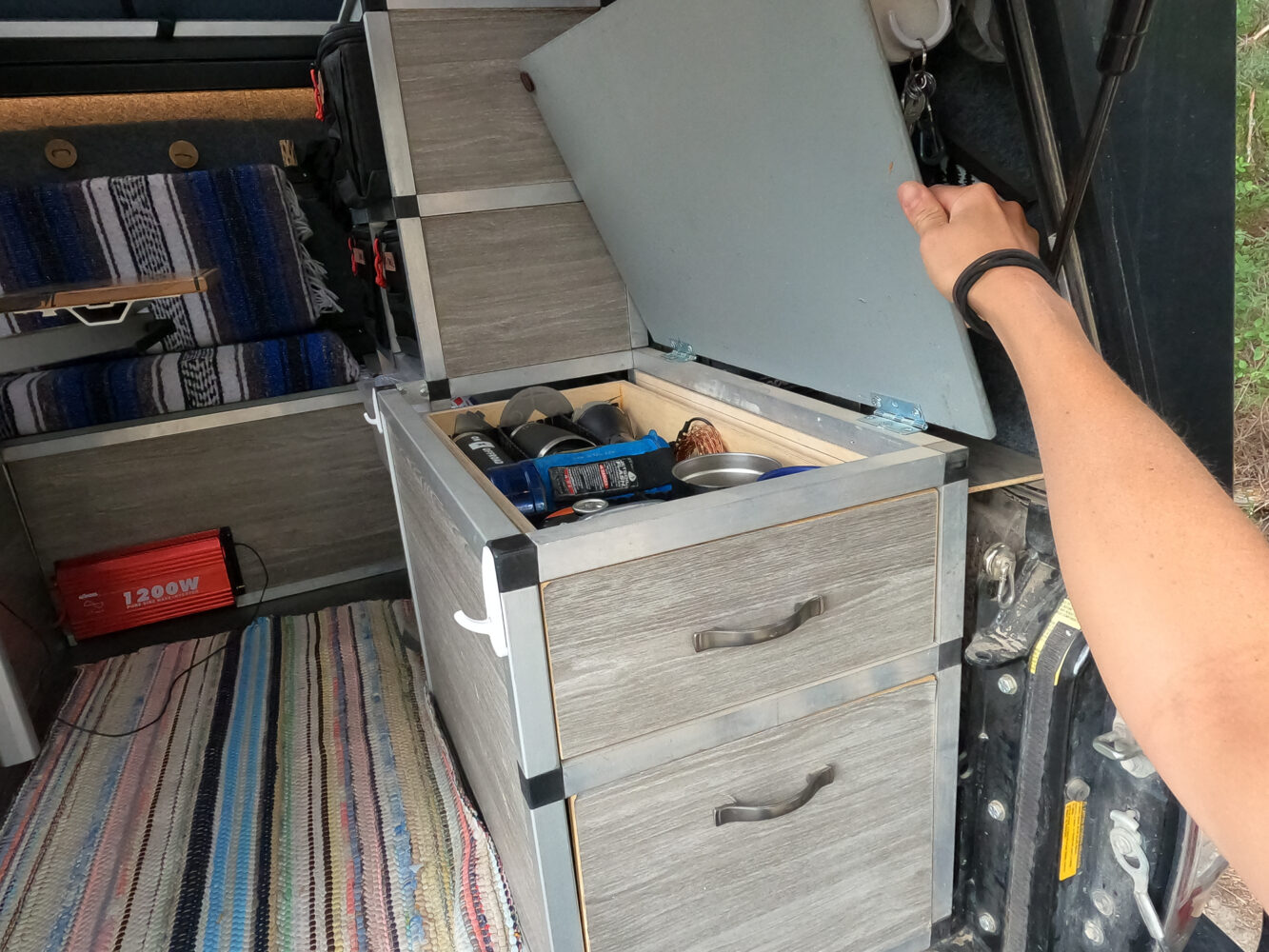 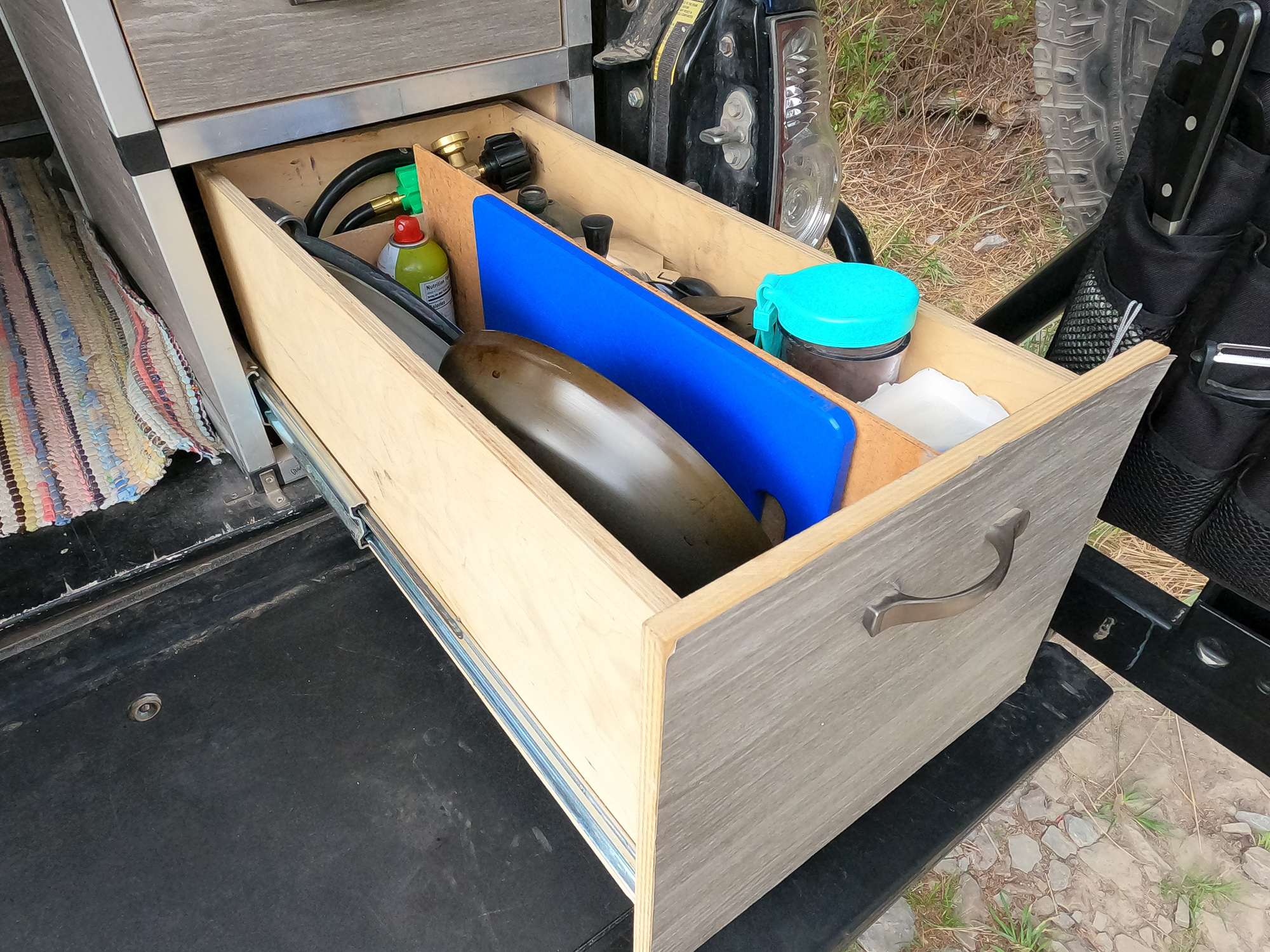 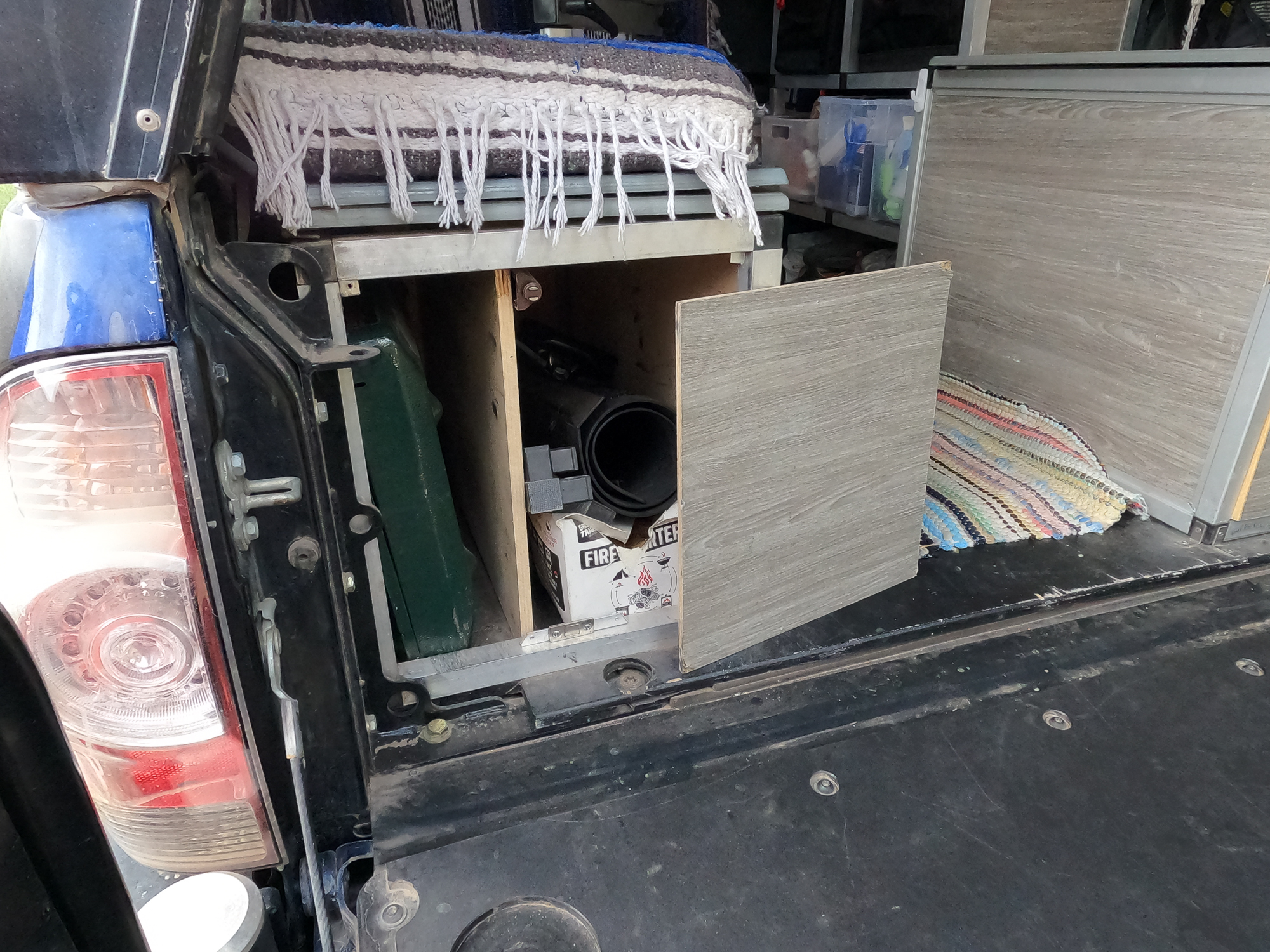 Ninety-five percent of the time, I use the tailgate as my table. Mountain Hatch tailgate inserts are such a game-changer for this! Sometimes I’ll use the drop-down table off the rear bumper swing-out, but that’s just if the tailgate is limited on space and the Coleman stove fits perfectly on that little drop-down table. Inside the camper, I have a Lagun RV table with a beautifully commissioned top by Todd Henderson. This is my desk for the laptop if I’m stuck inside the camper. 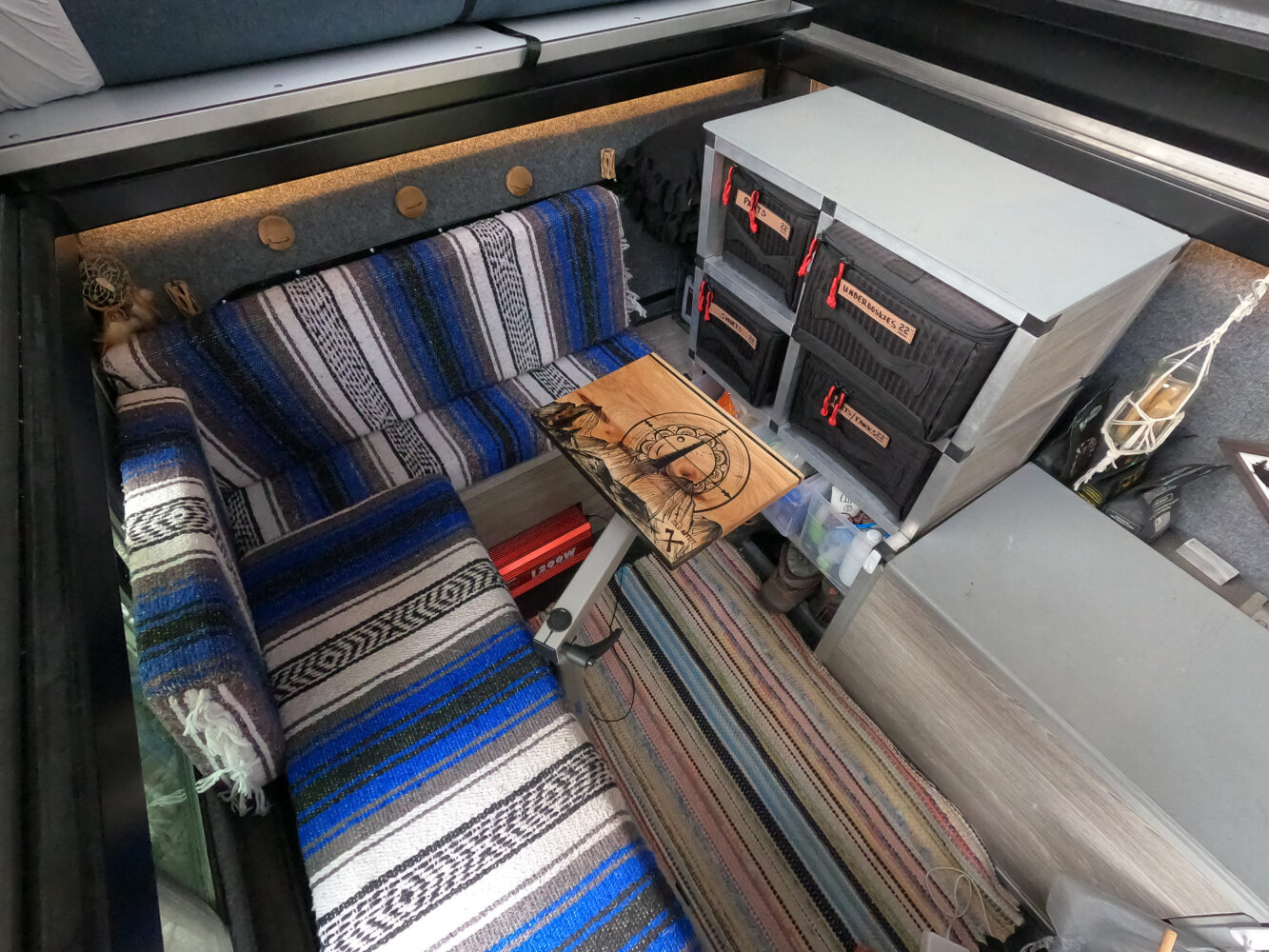 I started out using dinky duffel bags for clothing but upgraded to the Stingray bags from STEP 22 Gear. I use four of those for all clothing, except for jackets, hats, and beanies. For those, I took trunk cargo netting and created an ‘attic’ for the back half of the truck cab. I keep grab-n-go things up there. Below the cubbies where clothes are kept, there’s a row of three little bins. One of those bins has my toiletries, one is the medicine cabinet, and the other is a random bin of stuff.” 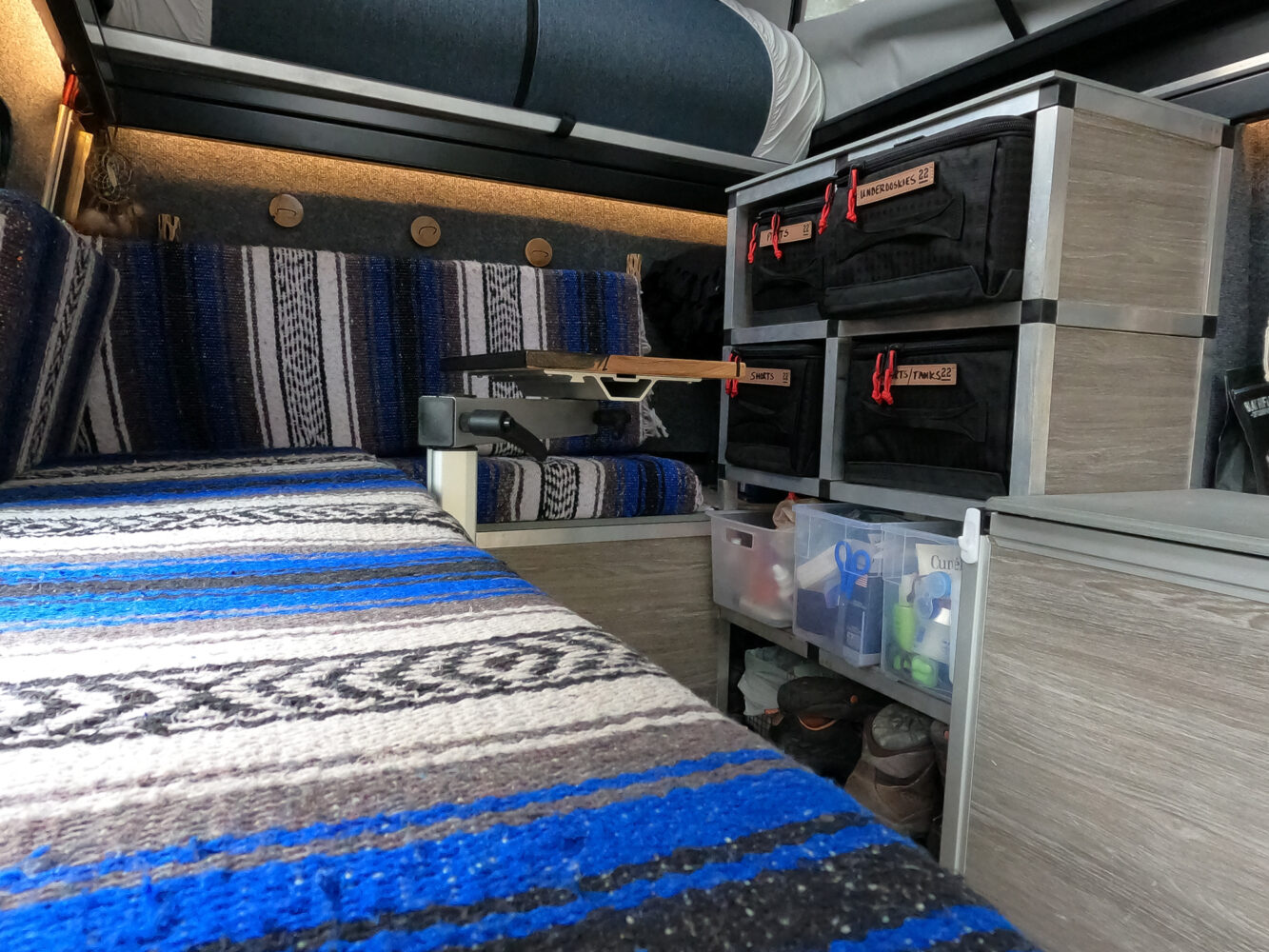 “I did a rear seat delete in my Tacoma specifically for the fridge. Right now, I have a 54-quart SnoMaster dual-zone fridge/freezer. Dried goods are stored on the floor in front of the fridge. As I mentioned earlier, I have a camp kitchen ‘rack’ that holds spices and some oil.

Before hitting the road, I picked up a 5-gallon LifeSaver jerry can, and it is by far my top recommended piece of kit. It has a filtration system, which allows me to resupply water from anywhere. This resides on the back bumper. Prior to the LifeSaver, I had a 5-gallon Front Runner water jerry back there. Now the Front Runner one is back-up water and lives in the trailer. I’ll fill it with river water and use it for ‘showers’ or for refilling the LifeSaver can.”

“I’m running two 100-watt Renogy solar panels up on top of the camper. Those feed one Optima Red Top battery, which is stored inside the camper behind the furthest back bench. It powers the camper lights, fan, inverter, and fridge. The inverter I’m running is a Giandel 1,200-watt sine wave.” 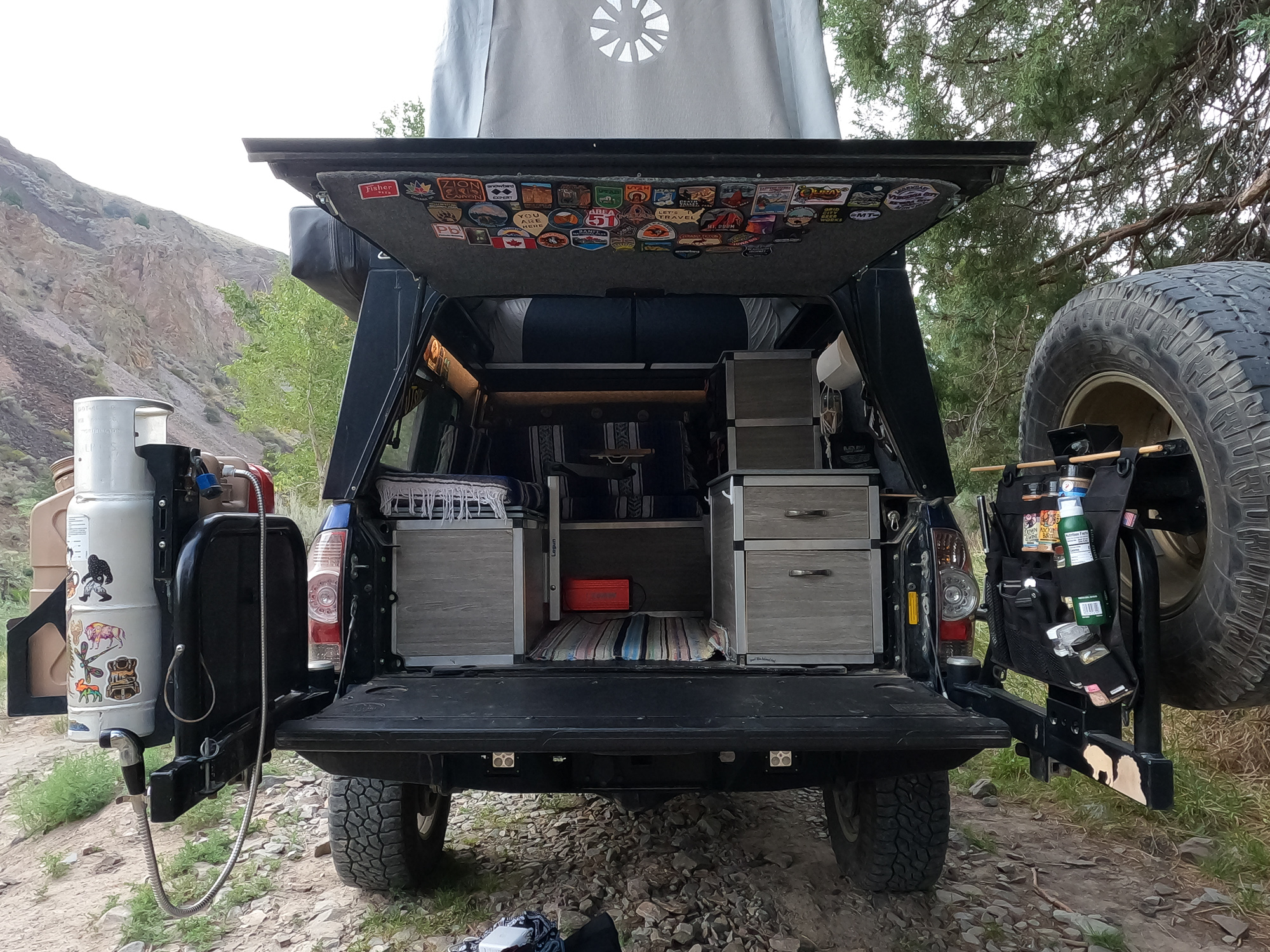 “In the cab of the truck, I keep a STEP 22 Pangolin bag of tools, compressor hoses, and some recovery gear. At the time of this article, I am towing a small enclosed trailer with me while on the road specifically for my dirt bike, but there are a couple of totes for extra truck stuff, like oil changing things, electrical whatnots, etc., in there.

There are days when I feel like such a cheater with my trailer! I picked up a 5- by 8-foot enclosed trailer from Advantage Trailer. The entire purpose was to have a garage on wheels since I have hobbies that I didn’t want to give up while living on the road full-time. Things like the dirt bike, paddleboard, and workout stuff are kept there. It’s been nice to have.” 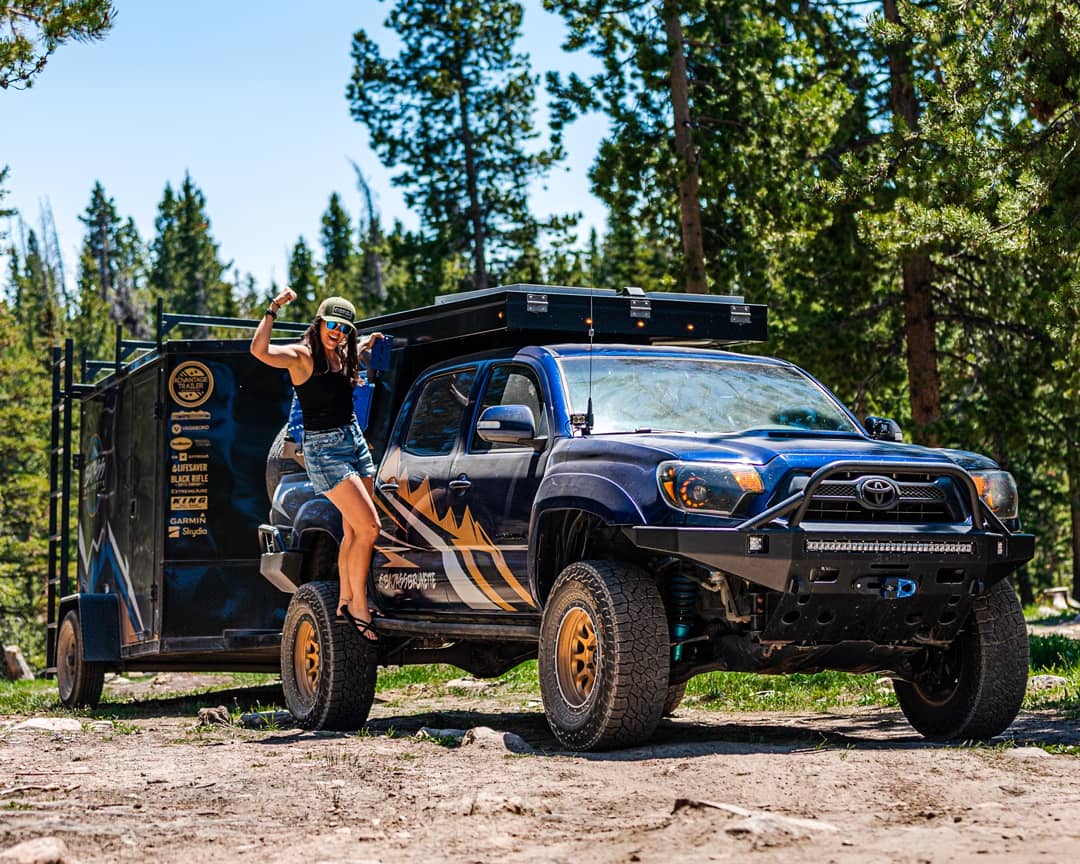