I first crossed paths with action-sports photographer Brett Wilhelm in Driggs, Idaho, back in 2018. I was en route to Victor, Idaho, to run an event, and Brett was making his way south for a photo assignment. We chatted photography over a cup of coffee before going our separate ways. I connected with Brett later that summer in Basalt, Colorado, where he gave me a tour of his unique imported Toyota TownAce camper.

What did you purchase your vehicle for?

I purchased the van for two- to three-week adventures around the American West and as a mobile office for my photography business to take on some projects that might not otherwise make financial sense.

Why did you choose this vehicle? What do you love about it?

For a few years, starting around 2015, I’d been looking at Sprinters and VW Vanagons, but the pricing seemed so far out of reach, given the heightened desirability. Having grown up in a military family and living in Japan in high school, I’d learned to drive there. As soon as I discovered the JDM Toyota camper platform (thanks to @ottoex) and import process to the US, I was immediately drawn to it, in part, for the nostalgia.

The platform boasts an incredible feature set in the compact footprint of the van, and knowing Toyota’s reputation for reliability and durability on top of a relatively simple diesel driveline, I was sold. The pop-top and big windows offer plenty of airflow to keep things cool in summer, while the double-wall fiberglass body and diesel heater make it very comfortable ski touring in the High Rockies in the depths of winter.

Beyond the uniqueness of the vehicle, while it’s by no means fast, I still have the ability to cruise interstates at 60 mph (as long as it’s not uphill). Yet with a lifted stance, low transfer case, and very short wheelbase, there are very few places I can’t go. Sometimes, it’s that last 1/4 mile or even a few hundred extra feet that make for amazing campsites. 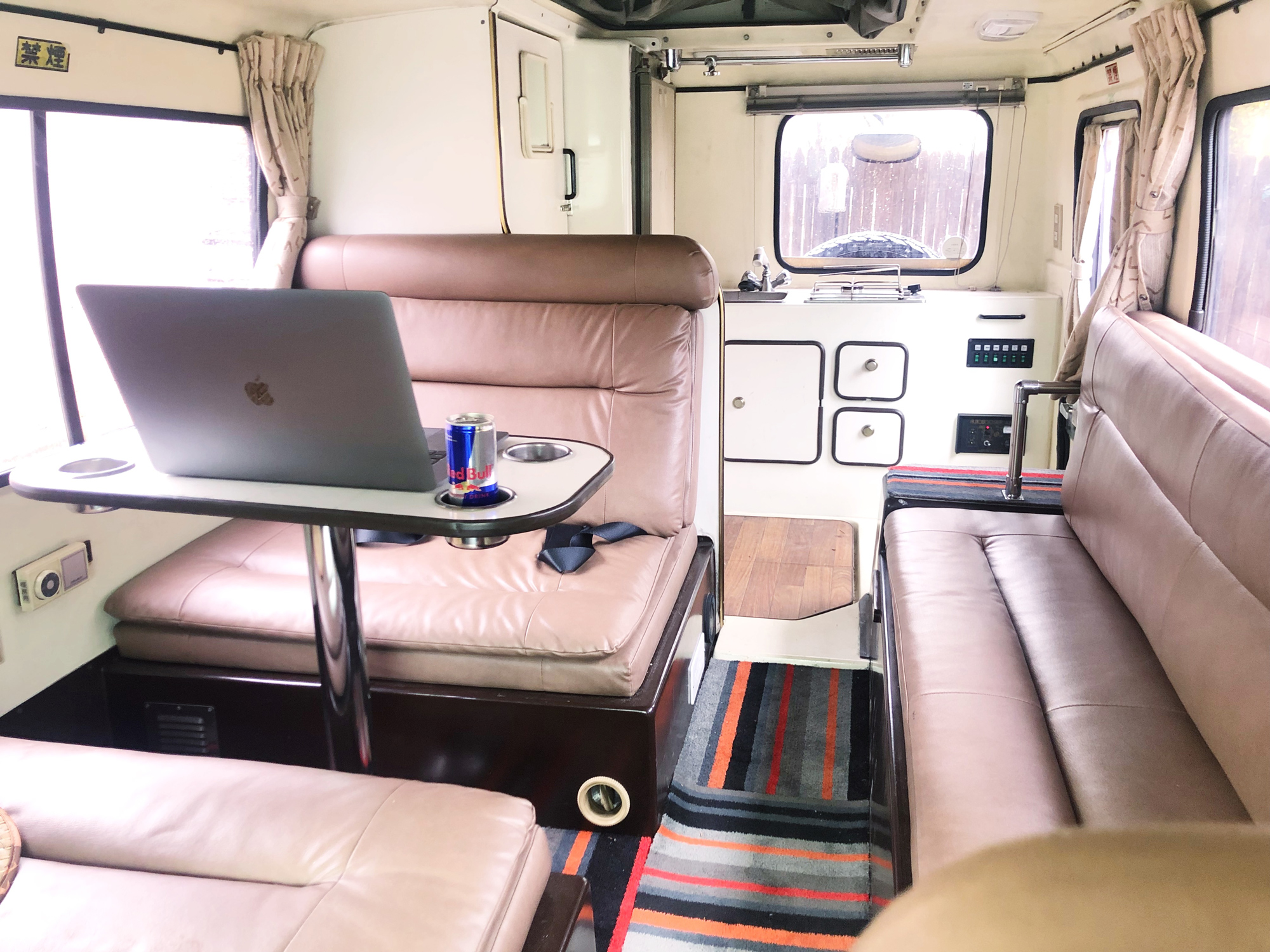 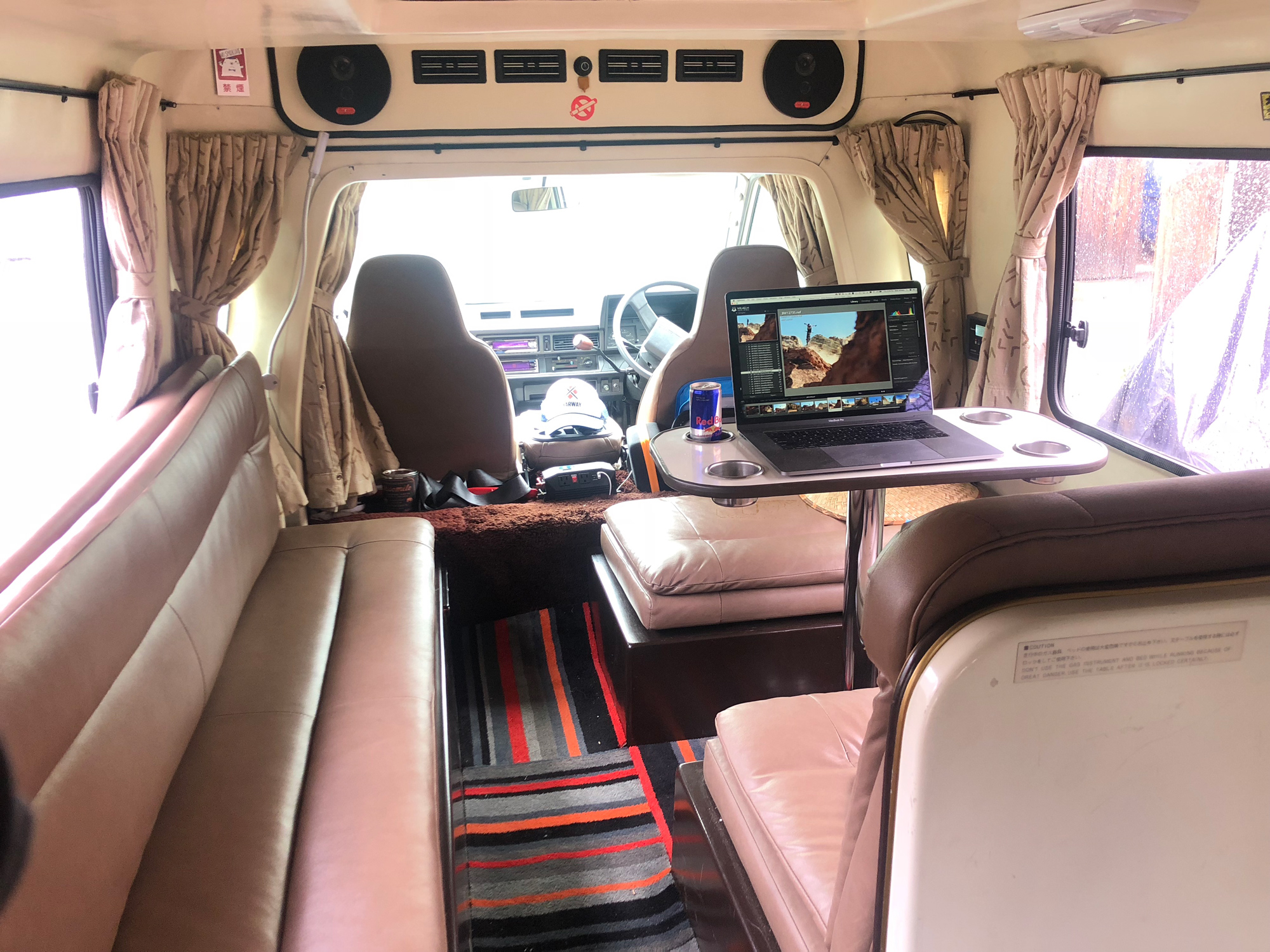 Does your particular vehicle have a story?

I brought the rig into the US in 2017 via JDM Car and Motorcycle in Seattle, a great little importer with a long history in the import world. While A’m Craft Ltd. went out of business sometime in the early 2000s, I believe it was like a Winnebago of Japan, sourcing Toyotas chassis from the factory and fitting the fiberglass camper portion to the frame. For a 25-year-old vehicle, it was in really great shape after a long life touring Japan, due in part to the yearly road-worthy certification system, whereby you can’t really allow vehicles to fall into disrepair.

I went hunting through the import documents shortly after taking possession, and it had come from the Tohoku area of northern Japan, just 30 minutes away from where I lived at the time in Misawa in the early ’90s. It was funny to think it might have been cruising the same roads and perhaps even ski camping at the same mountains I was back then. 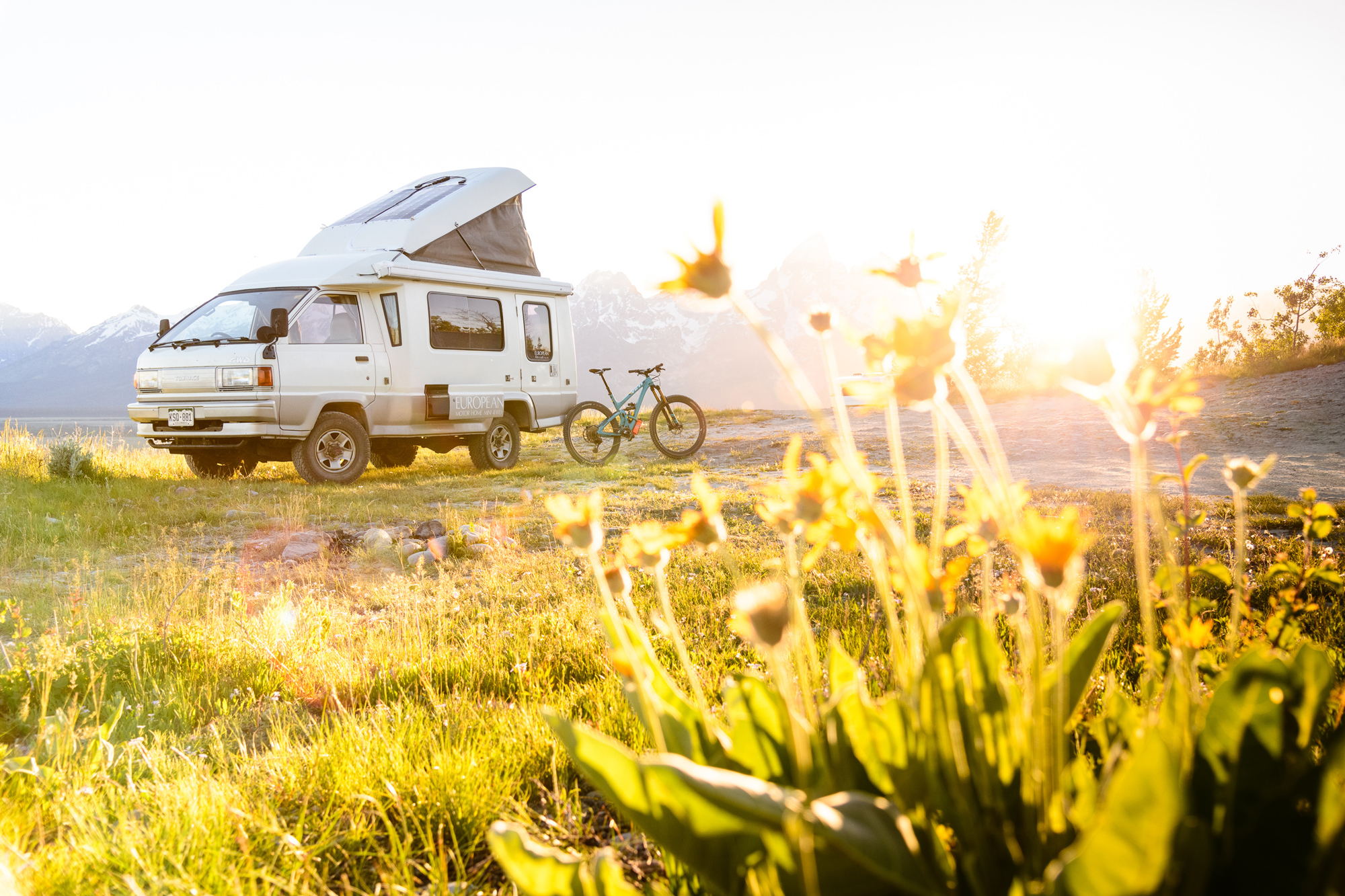 What is the most memorable adventure you have taken in your vehicle?

I’ve spent the better part of the last 20 years flying around the country for my work, so I looked at the van as a great way to slow down. And, where possible, as an excuse to take a few extra days on the front and back end of assignments to drive to the location and see parts of the country I’d been flying over for years, hopefully, visiting old friends along the way. I don’t think of anything I’ve done as that extraordinary, but I can easily say that I’ve enjoyed the mom and pop breakfast diner in a tiny farming community in southern Idaho as much as I’ve enjoyed making morning coffee under the grandeur of El Capitan in Yosemite. With the lower top-end speeds, there’s very little motivation to take the fast route anywhere, so exploring the backroads is a real driver on any trip.

Is your vehicle stock or modified?

Much of the layout and feature set are stock from the van’s factory roll out in 1992, speaking volumes to its efficient use of space. From the time I acquired it in the fall of 2017, I’ve done general restorative and maintenance work on the Toyota 2C diesel engine to keep things healthy. I added a 200-watt solar package from Renogy/Sunpower. I lifted the van a bit via the front torsion bars and a rear add-a-leaf kit from Toytec to make room for larger US-spec General Grabber tires. I’ve replaced the original Electrolux evaporative fridge, which was on its last legs, with a new Dometic, added propane/smoke/CO alarms, converted the propane fittings to US standard, and converted the interior camper lighting over to LED.

Finally, with the help of a good metalworking friend at Forty-One Fabrication, we were able to build a rack system onto the rear factory ladder/tire mounts, rebuild key awning parts, and generally reinforce some other older parts like worn fiberglass door latches. I’ve definitely had a lot of quality help on the engine and welding side, but most of the work I’ve done myself over time and it’s been a fun ongoing project in my spare time, assisted by my PhD from YouTube University. 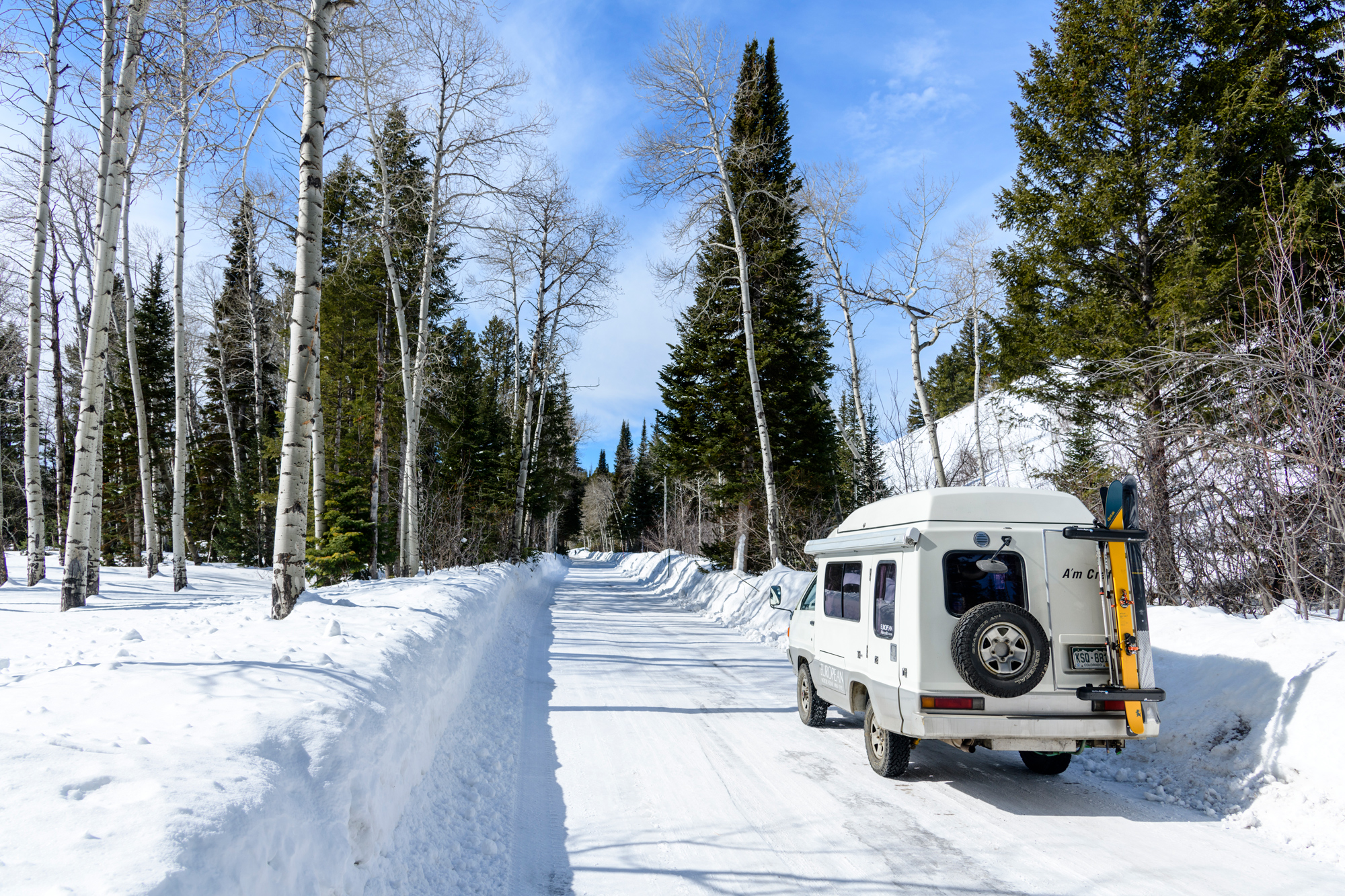 Do you have any additional modifications or changes planned?

I need to take care of some minor rust areas before they grow into larger problems, but luckily that’s just the front cab area as 75 percent of the van’s exterior is fiberglass. I’d like to convert the dual house batteries to lithium, but I’m still researching options to enable cold weather charging since I use the van quite often for winter ski camping. The largest project I keep mulling is either engine modifications or outright replacement, as the 2-liter non-turbo Toyota 2C diesel is, dare I say, a touch underpowered, especially at Colorado altitudes. Since the van is a cab-over design, there’s limited space for engine alternatives, but it’s a work in progress. I’ve certainly gotten used to a slower pace of life on the road, and climbing mountain passes with flashers on with all the laden semis. 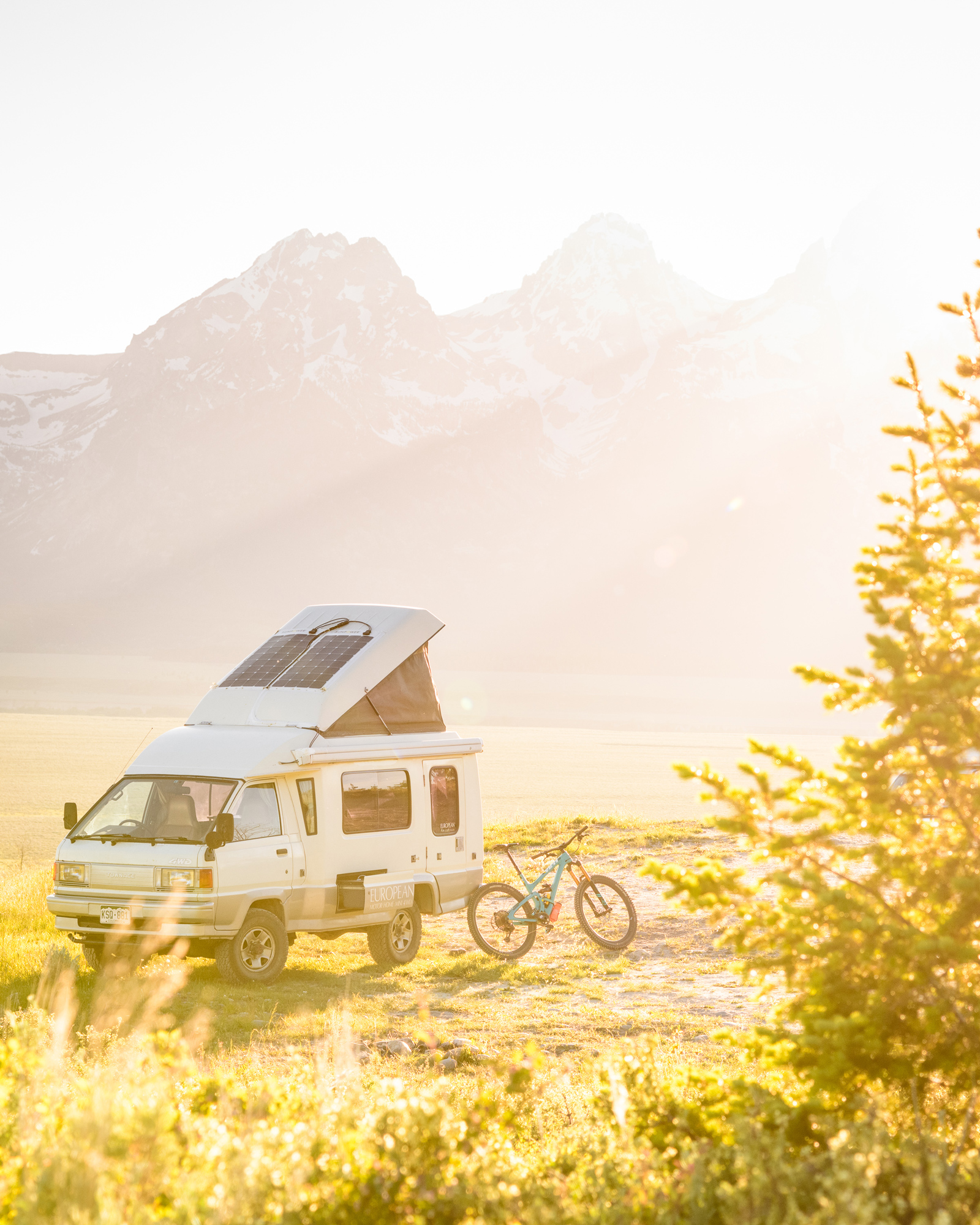 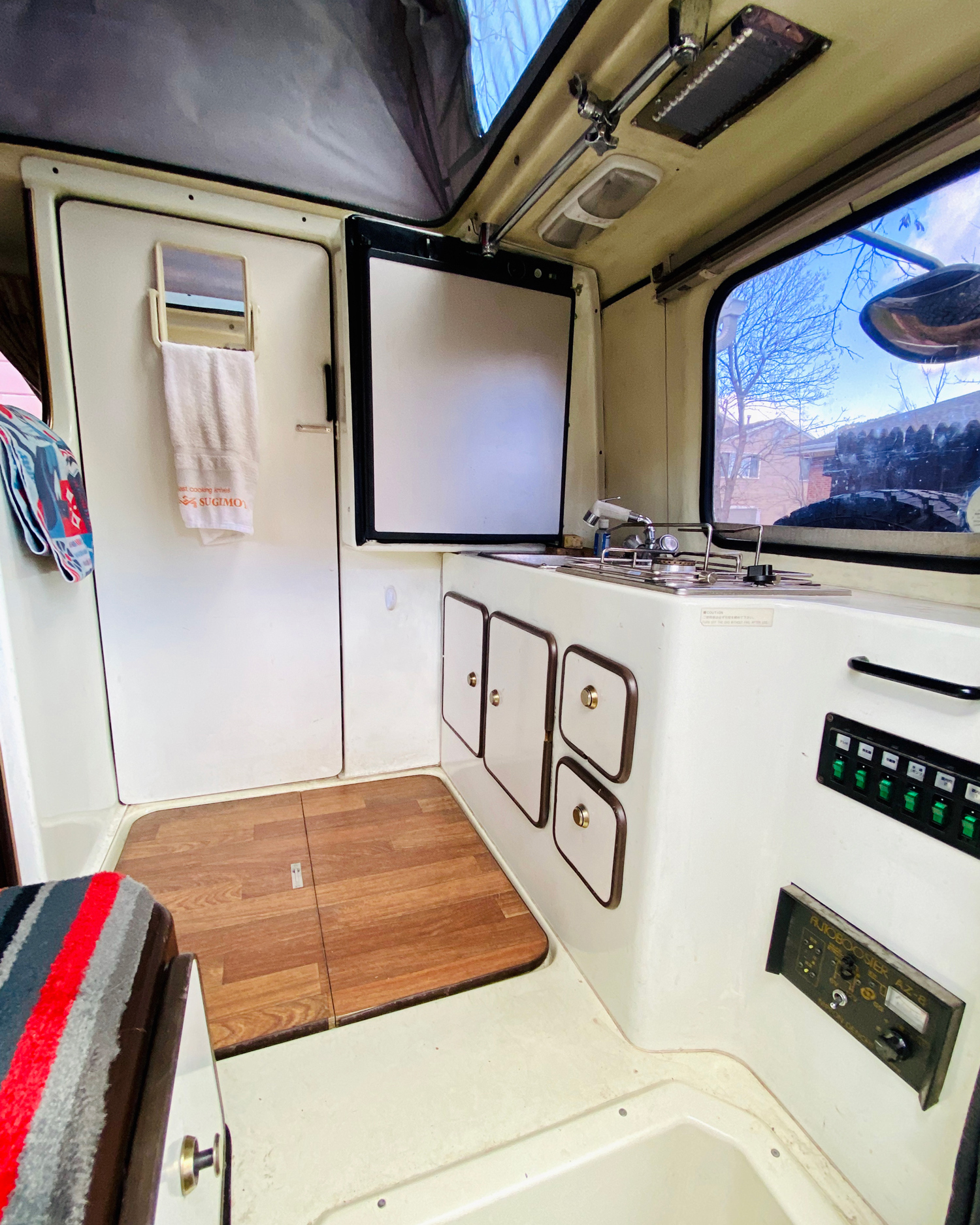 Do you carry any accessories with you?

Luckily the van came with almost every creature comfort I might need, right down to hot water and indoor/outdoor showers, so I’ve done little in the way of bolt-on accessories. I don’t have much in the way of recovery gear, as honestly, I’m rarely really pushing the limits, but I do keep some basics like a shovel and ax, along with a fairly extensive tool kit. The beauty of a 25-year-old diesel driveline is that most things are fairly simple. 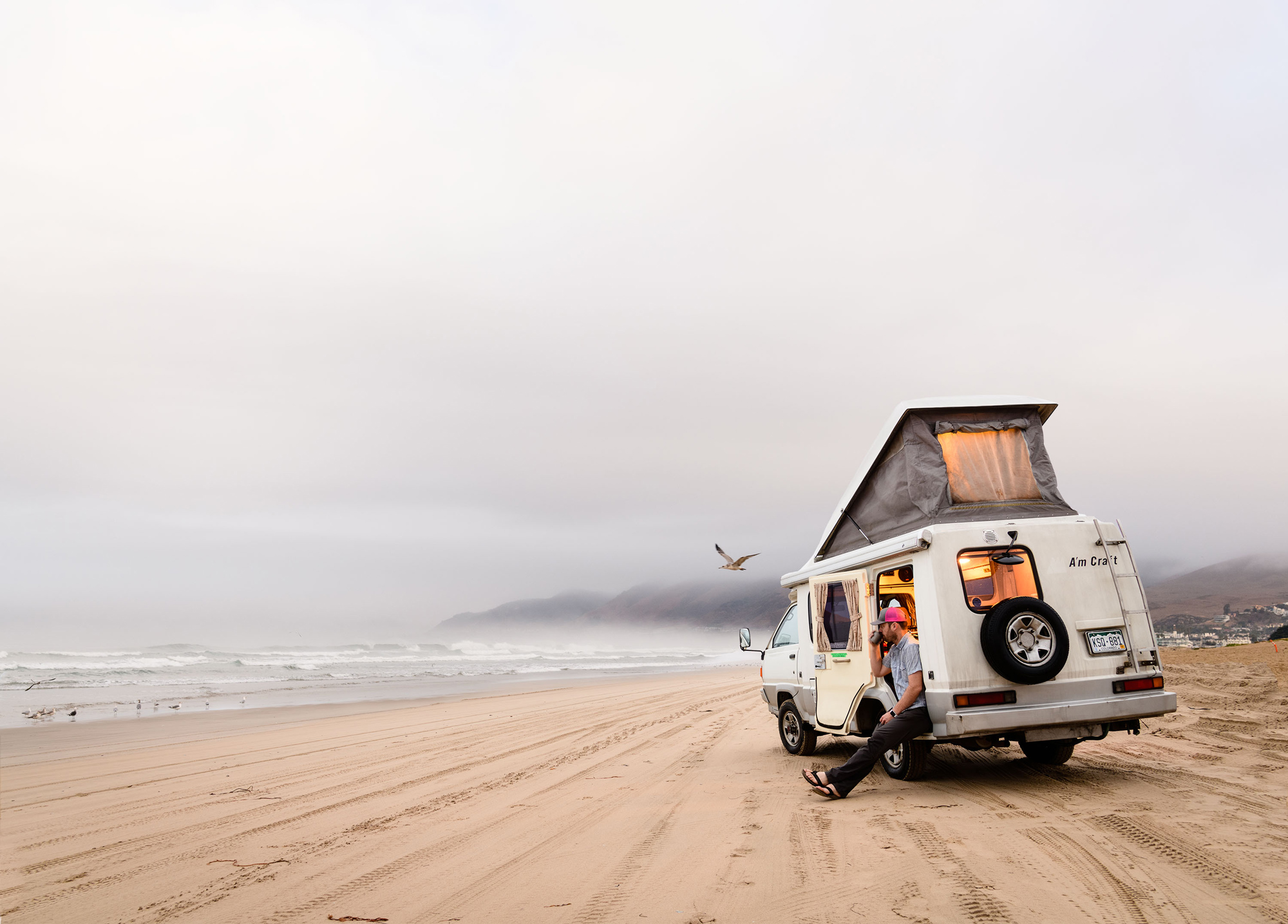 All photos courtesy of Brett Wilhelm.

Check out Brett’s photography portfolio at www.wilhelmvisualworks.com, and follow his travels on Insta @wilhemlvisualworks.