Sometimes you have to hit rock-bottom before you can realize your true potential, and for Jamie Leibert that meant landing in federal prison. This incredible low taught him what can happen when you lose your way. But after serving his time, Jamie decided to completely turn his life around. He abandoned his vices and took on extreme sports like base jumping and rock climbing. He also created a successful event production company, but Jamie’s biggest success story was born from his experience growing up in broken homes, surrounded by drug and alcohol abuse. Seeing an opportunity to help at-risk kids avoid his same fate, he founded a non-profit called Just Care More in 2014 which teaches lessons of personal accountability through adventure sports.

But Jamie is much more than a successful business owner, philanthropist, mentor, and extreme sports enthusiast. He is a modern-day explorer, traveling the world by VW campervan with his partner, Sandra. Together, they are attempting the ambitious goal of being the first people to fly a parachute in every country in the world. 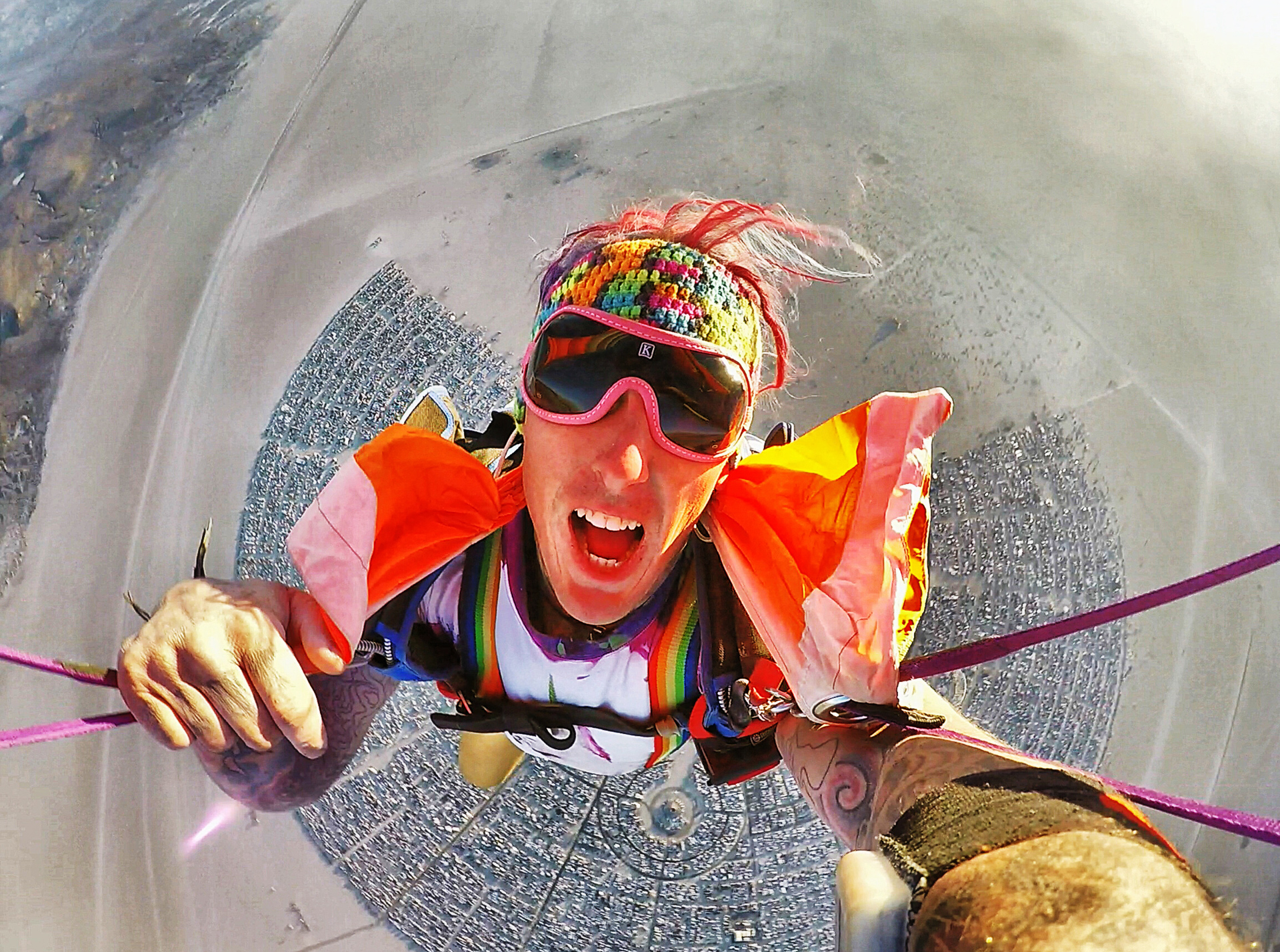 Getting into Flying Sports

Jamie met Sandra shortly after getting out of prison. She had also just gone through a rough patch in life and the two hit it off immediately. They bonded over their love of sports and ended up founding a media company together which let them travel all over the US interviewing artists, and creating content for events like mud runs and festivals. Eventually, a photography gig at a mud run led to an event director opportunity for Jamie. During this time, he also did his first skydive and loved it, but his work schedule and salary didn’t leave much time or money left over for continuing the pursuit. 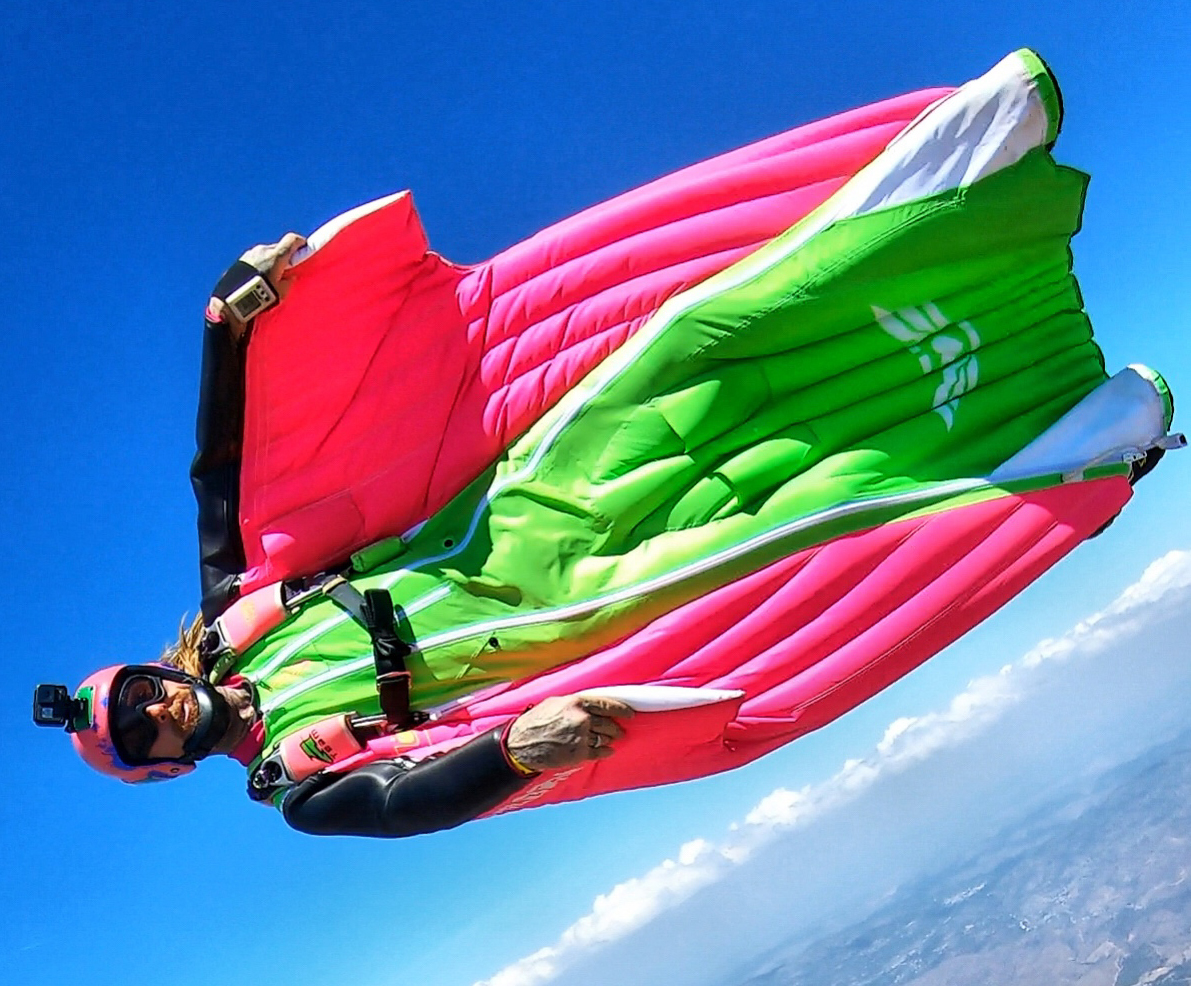 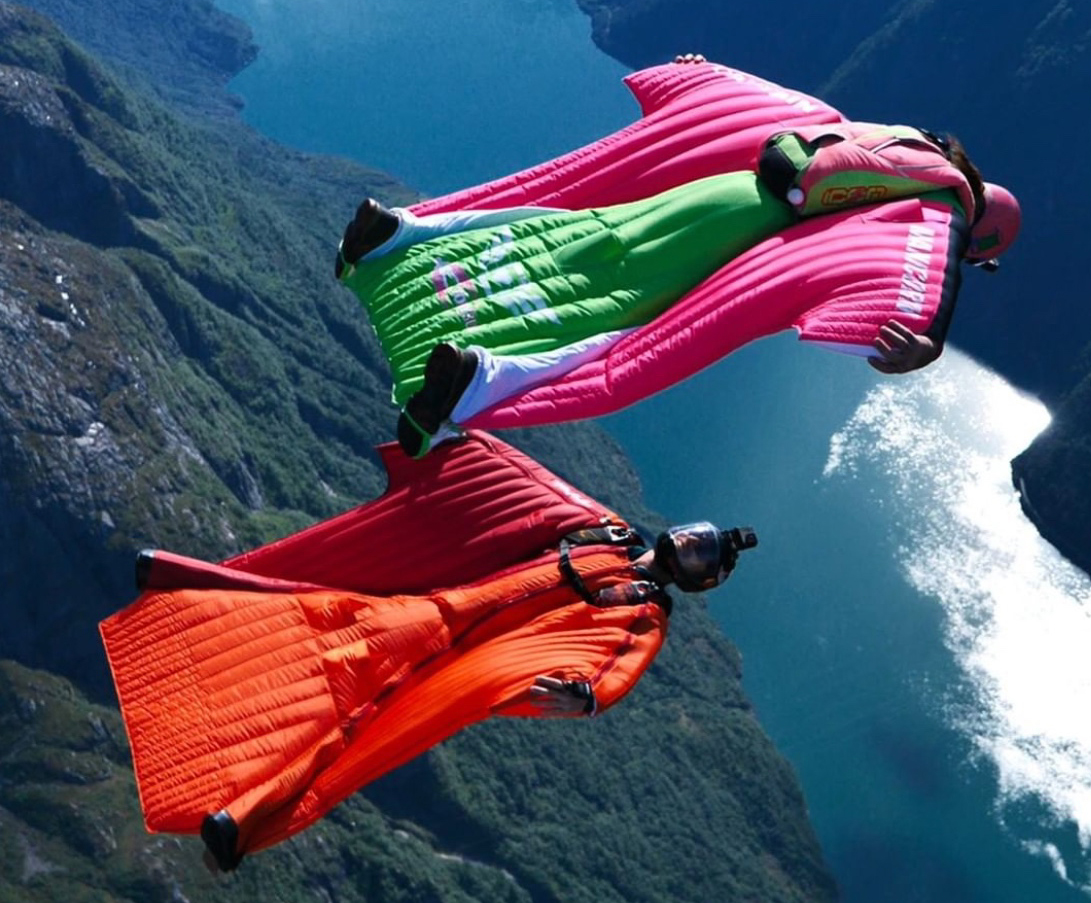 An opportunity to move from SoCal to Dallas, Texas, to direct Color Runs changed everything, and Jamie jumped (no pun intended) right back into getting his AFF skydiving certification after relocating. With his A license in hand, Jamie was jumping out of planes every chance he got. “We were throwing 23 events [a year], traveling the nation, but I spent every waking moment that I wasn’t working on the runs at the drop zone,” he said. Jamie’s laser-like focus on skydiving and the fact that Sandra hadn’t yet begun her skydiving certification almost cost them their relationship.

After some thinking, Sandra decided that she also wanted to try skydiving and she pursued her certification at a manic pace to catch up to Jamie’s level of experience. Eventually, skydiving would lead to BASE jumping, wing-suit flying, paragliding, and every other sub-discipline of the flying sports which Jamie and Sandra have now been pursuing for many years. 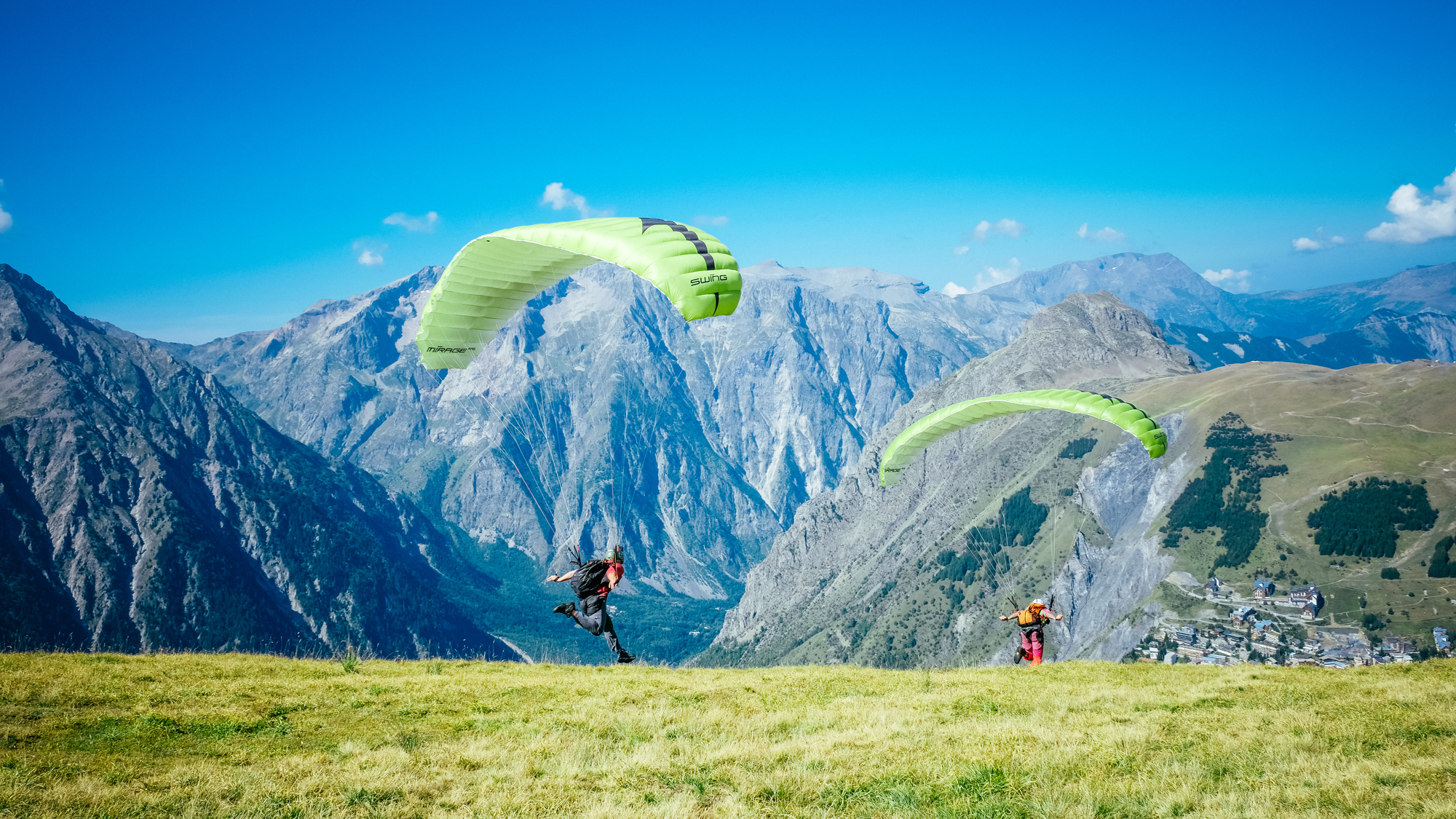 Jamie and Sandra’s world-record attempt of flying a parachute in every country in the world began before they even realized it. Toward the end of 2019, they had traveled to Norway where they purchased a VW Transporter which would let them travel comfortably, haul all of their flying gear, and also serve as a free place to sleep. They began their trip by driving the entire coast of Norway through Sweden. They continued through Denmark, Germany, the Netherlands, Belgium, France, Spain, Portugal, eventually circling back through central Europe and finally, into Romania. 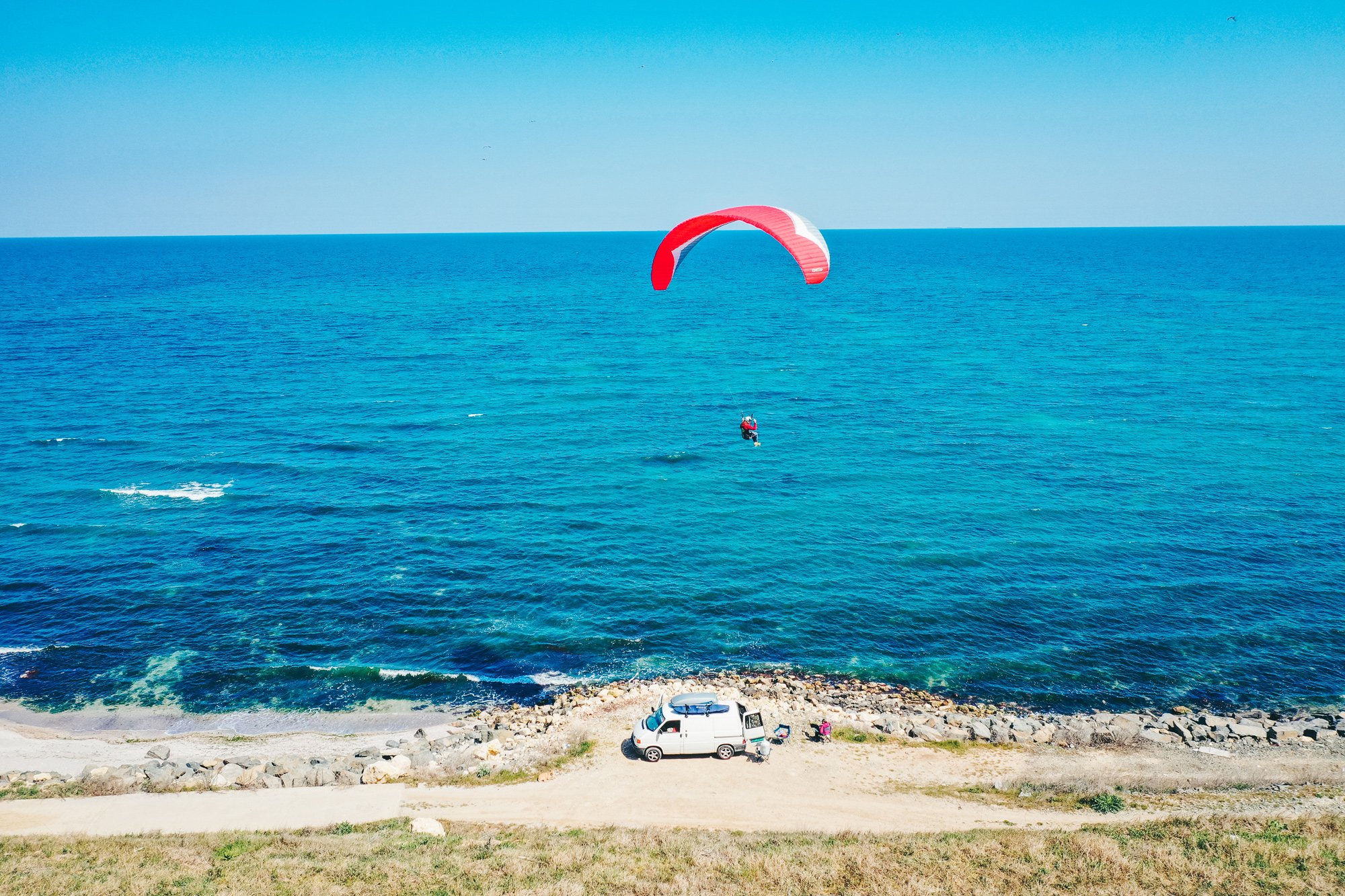 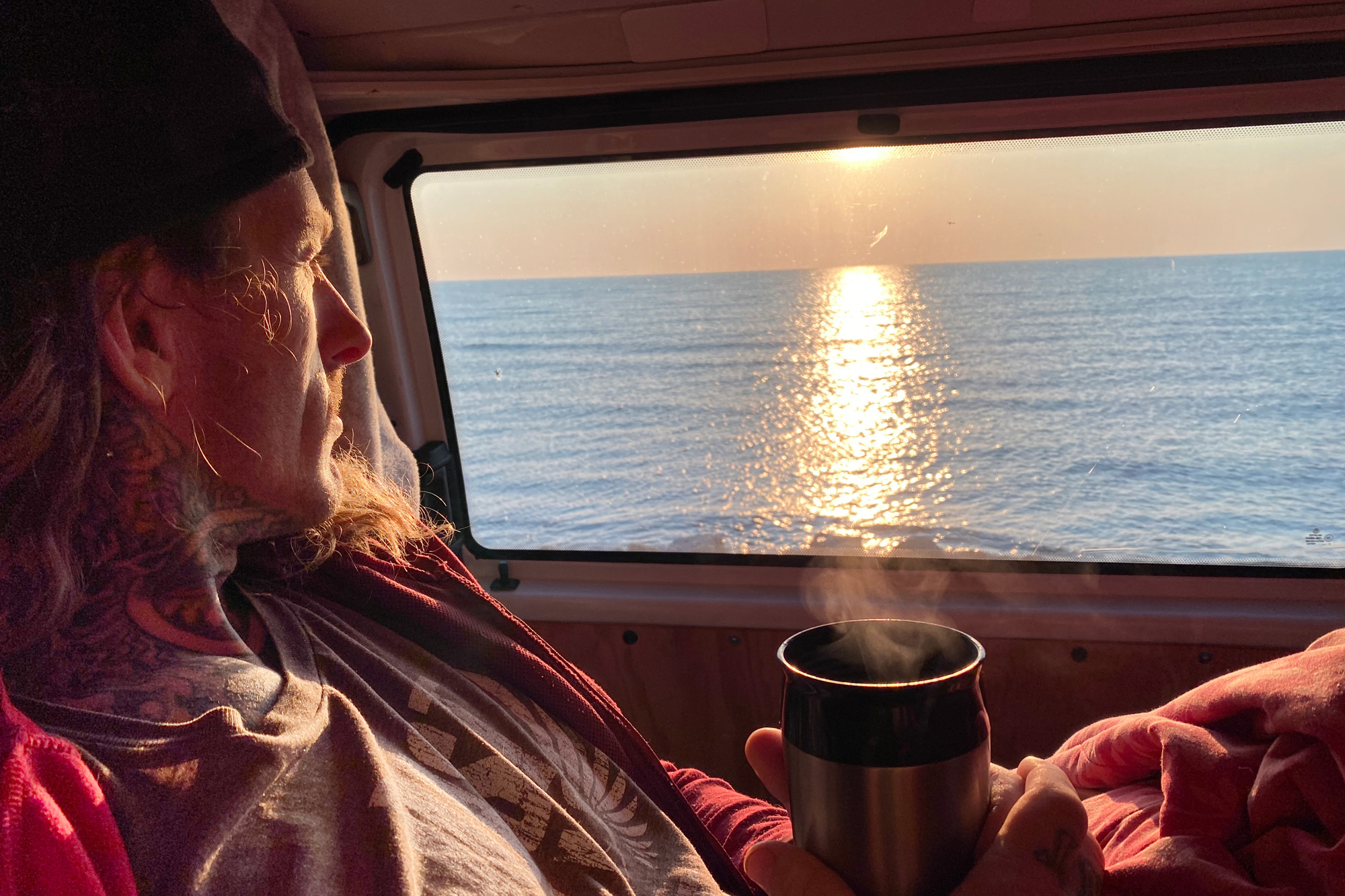 Initially, their plan was to produce a YouTube series documenting all of the flying disciplines they were pursuing as they explored Europe. But when the pandemic hit, they were forced to shut down their event business back in the US and found themselves re-evaluating their travel goals. One morning, Sandra proposed what she called a “bomb.” She told Jamie, “I have a crazy idea. What if we try to fly a parachute in every country in the world?”

Jamie was flabbergasted by the idea but was immediately onboard.

“It was said out loud, [and at that moment], we realized that we couldn’t go back to [organizing] events. We had this opportunity to finally pursue our dream. Now, I wouldn’t say that our dream was to fly a parachute in every country in the world: our dream was to do air sports in [lots of countries]. It only made sense when we started looking into a world record—more people have been into outer space than have even traveled to every country in the world. So when you take that into consideration…of all eight-billion people in the world…we’d be the only two people to ever do this.” 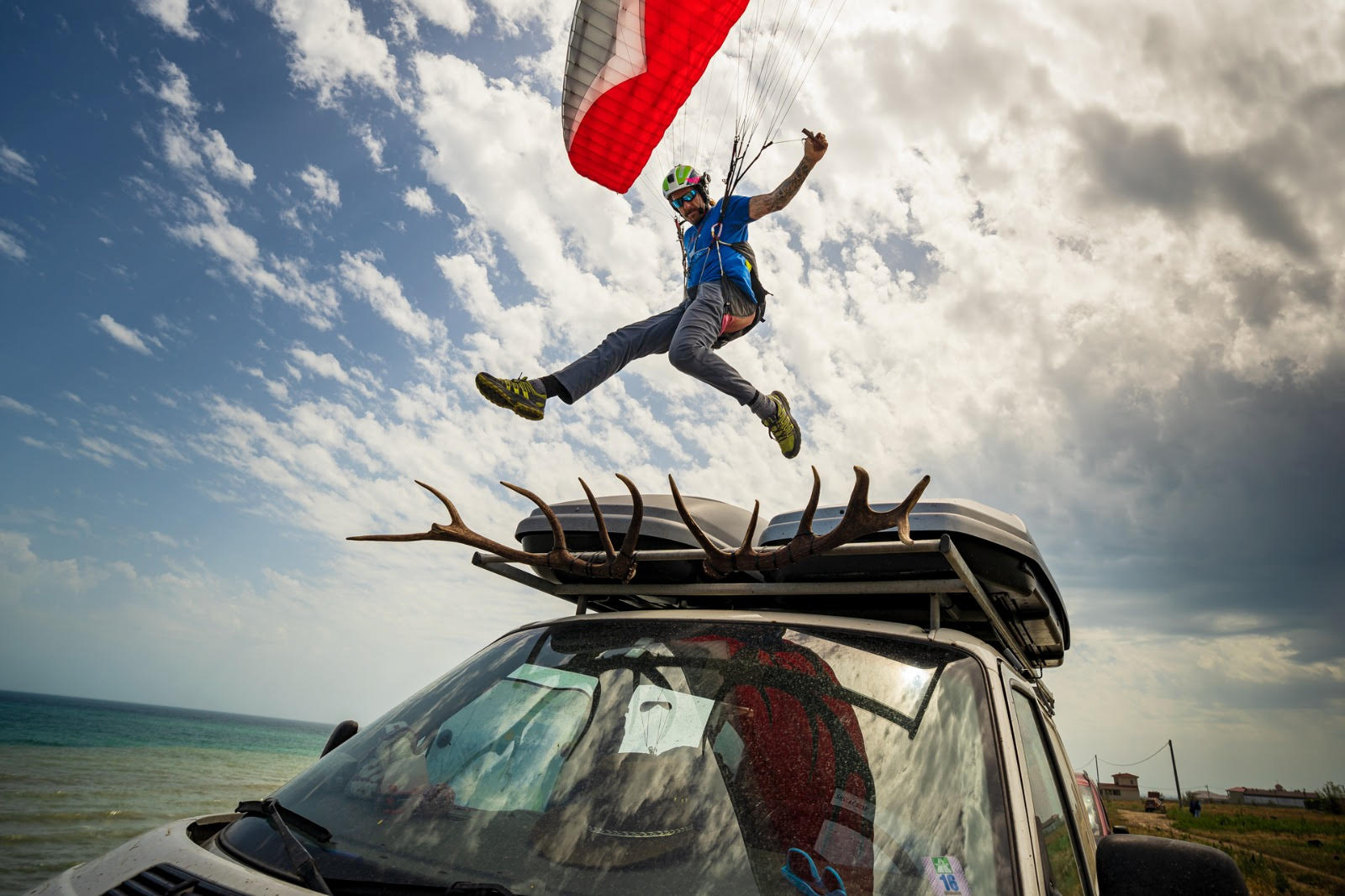 But the process of actually getting their record certified is not going to be a straightforward process. Sandra explained, “There are going to be thousands of pieces of paper that we need to submit; we have to have very detailed timing logs and witness statements.” But despite the challenges of documenting and certifying their record, Jamie and Sandra are forging ahead. They are planning on taking three weeks in every country which adds up to roughly 11 years to complete the record.

Jamie and Sandra are currently traveling Europe in a 2004 Volkswagen Transporter van which they purchased from a friend. They kept things simple by framing in a bed platform and that was the only addition they made for their first eight months of traveling. Eventually, Jamie built additional storage compartments and pull-out drawers with nothing more than a hatchet and a hacksaw (a feat he prides himself on).

“I’ve had everything from a 44-foot bus to a military Humvee, but this is our first van. For us, it was about spending the money on traveling, on adventures, and on the paragliding equipment. Here’s the reality: it’s about going slow and finding remote locations. To me, overlanding is about driving without a destination until you wake up, and you’re exactly where you’re supposed to be.” 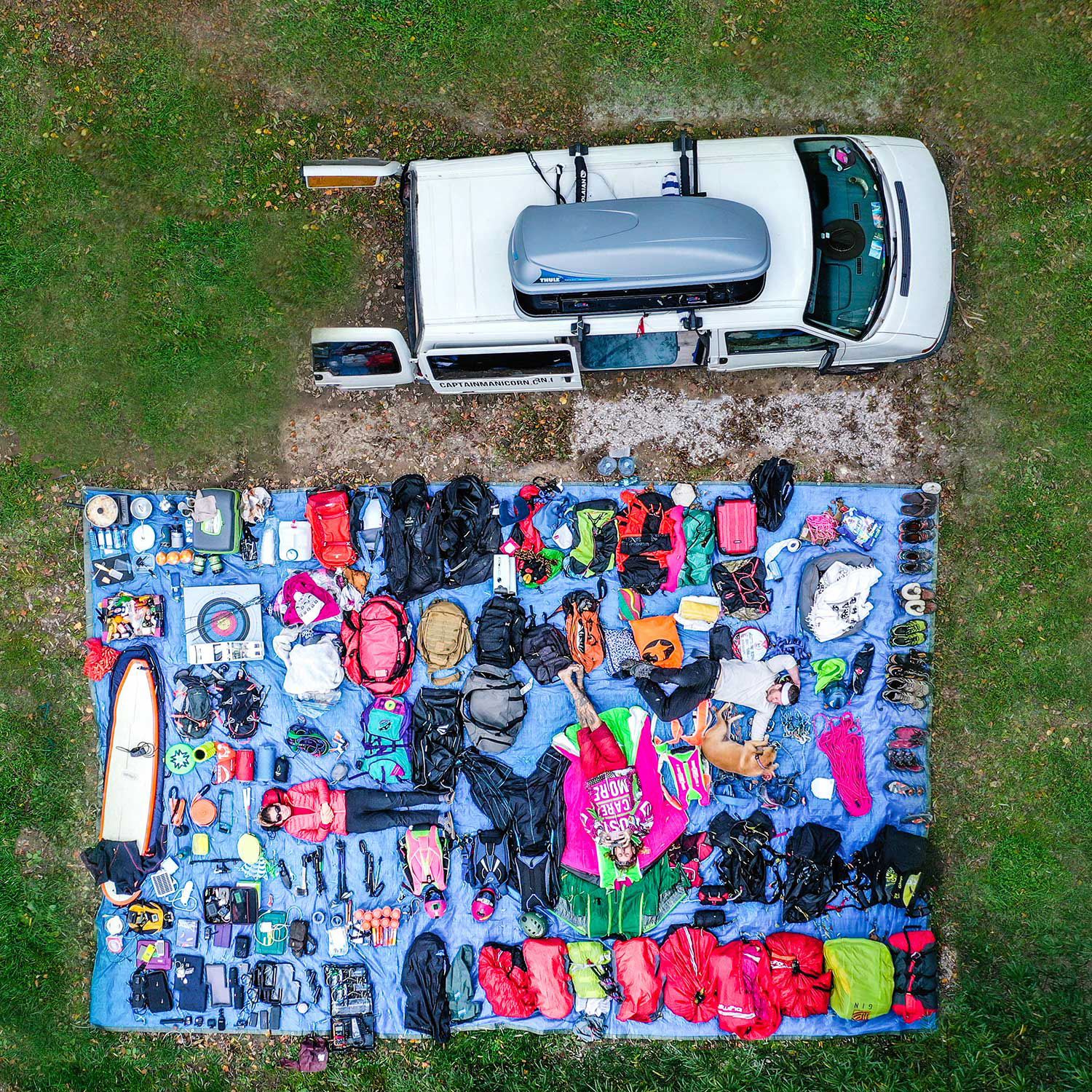 Sandra explained, “Because of all the gear we have, and our dog, this is why we have the [van]. It allows us to journey from country to country. When we’re driving through these small towns in the mountains [to] super remote villages, that’s when we really see the countries, not in the tourist strips with all the shops—we avoid those at all costs.”

The first episode of Jamie and Sandra’s European flying adventures will go live on July 12th on their YouTube channel, Captain Manicorn. You can also follow them on Instagram @CaptainManicorn to see photos as they continue pursuing their dreams of flying in every country in the world.